An understanding of how to develop the proper outline, collection, and the resulting elevation of the forehand is crucial to developing a correct dressage horse.

The stages of collection during training.
Click here to discover what makes ELD arenas the obvious and best choice

To begin with, you need a horse that is built specifically for your discipline of interest. It’s much the same as a person who is over six-foot tall being suited to basketball, compared to a person who is under five foot and more suited to weightlifting. It is the same for the sporting horse.

The first thought that comes to mind is that the horse should be capable of carrying you with ease. Is the horse well balanced (meaning, is his spine already near to the horizontal)? As we know, the spine is sloping downwards from the back to the front, ending at the last neck vertebrae (number seven), which is approximately the widest part of the base of the neck.

This location of the last neck vertebrae and the first thoracic vertebrae (the vertebrae in the back that the ribs are attached to) we like to be high in relation to the hips. Placing ourselves behind the horse, we would like to see the withers higher than the croup.

The illustrations (1-5) are self-explanatory, however, I would like to emphasise certain aspects. To be really accurate, it is not so much that the forehand rises, it is more that the hindquarters are lowering. A horse that is up in front without lowering behind is hollow backed.

We would like the horse to move forward with calm, regular, long strides — not short, quick strides. Why? Because only with long strides will he flex his joints in the hind legs and lower his croup. In the landing phase, the joints are still slightly flexed so they can develop the spring quality, but more importantly, that’s the only moment for the application of the half-halt in the future.

A prerequisite, of course, is the foundation: forward, loose, straight, and then last but not least, collection.

FROM LONG & LOW TO LEVADE

In diagram one, the hind legs are actually a little too long and out behind; I would love to see a straighter line down to the straight, standing cannon bone of the hind legs. In this picture, the outline of the horse is long and low. The young horse should not be any lower, unless his back or hindquarters are inclined to be weak, but certainly no more flexion at the poll.

As we go through the diagrams, we can see the relationship between the flexion at the poll and the level of the neck go together: the higher the neck the more flexion at the poll; the lower the neck, the less flexion. As we see clearly there is no need for the face of the horse to come behind the vertical (“rollkur”).

However, being behind the vertical could accidentally happen through lack of impulsion, where the rider was for a moment inattentive and forgot to use the seat and leg to create more impulsion to restore the contact (connection). To address this, a conscious driving aid from the seat and the leg to make the horse more forward, together with an almost simultaneous half-halt to keep the rhythm and restore the balance, is needed. Or did the rider deliberately, by manipulating with their hands, put the head behind the vertical!

As you can see in diagram two (which is the most difficult phase) by holding the reins steady and engaging the horse more — through using your triceps, not your biceps — he should slightly flex the poll more and harmoniously raise the neck up, not down. 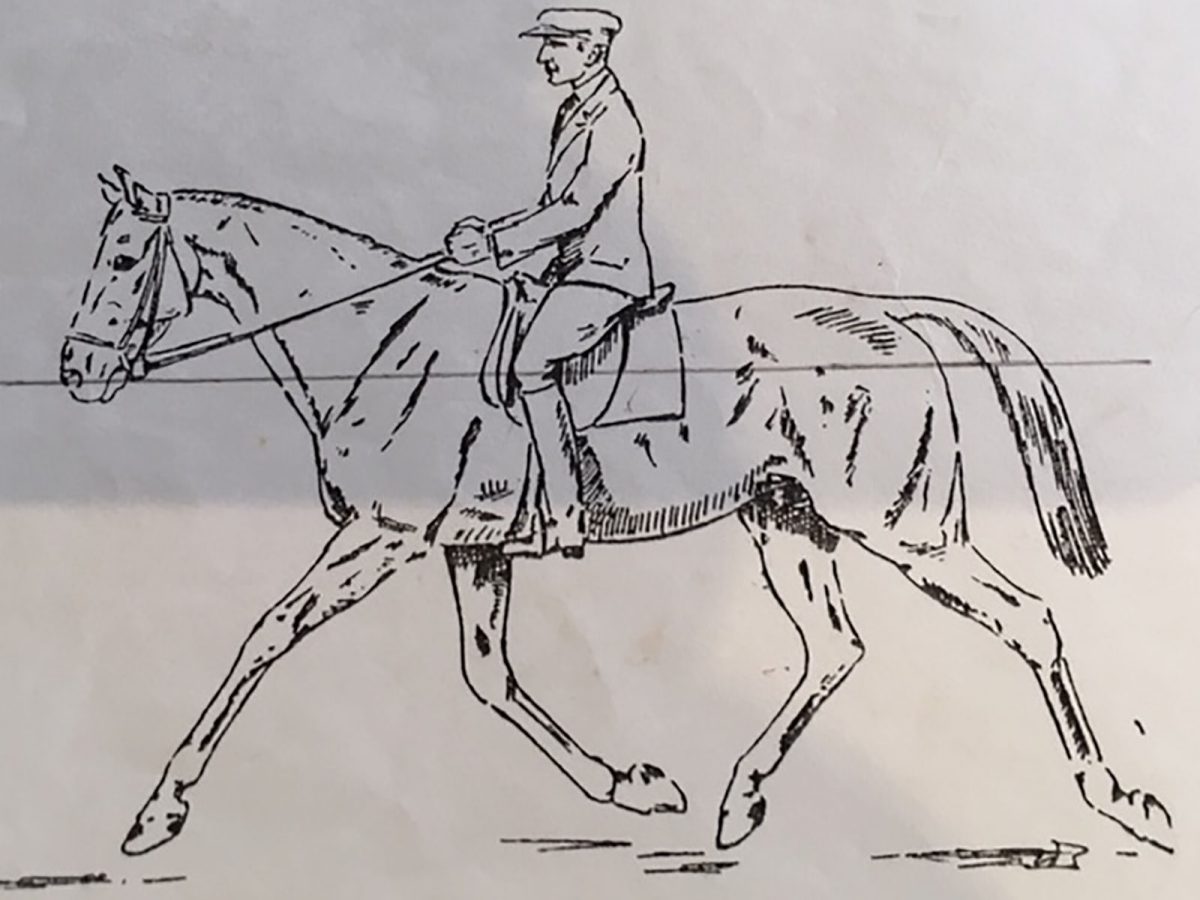 A young horse working according to diagram 1. 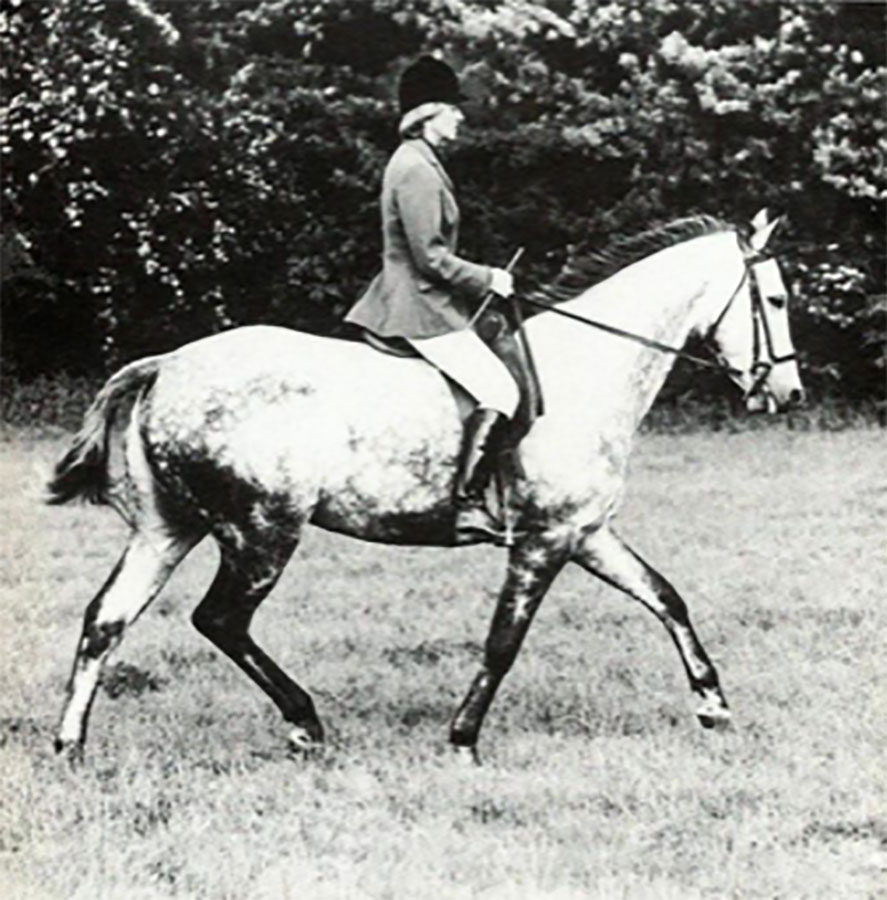 A horse working in a similar frame to diagram 2. 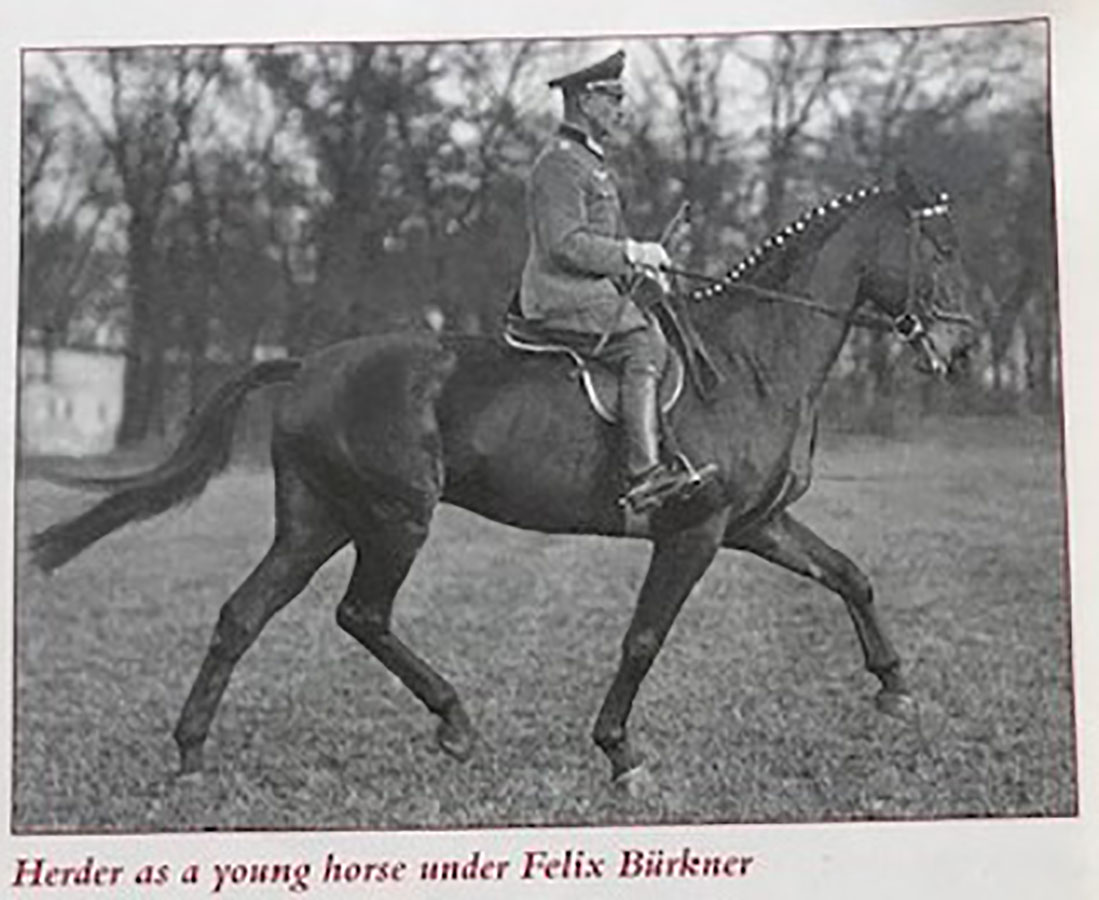 A young horse working as per diagram 2. 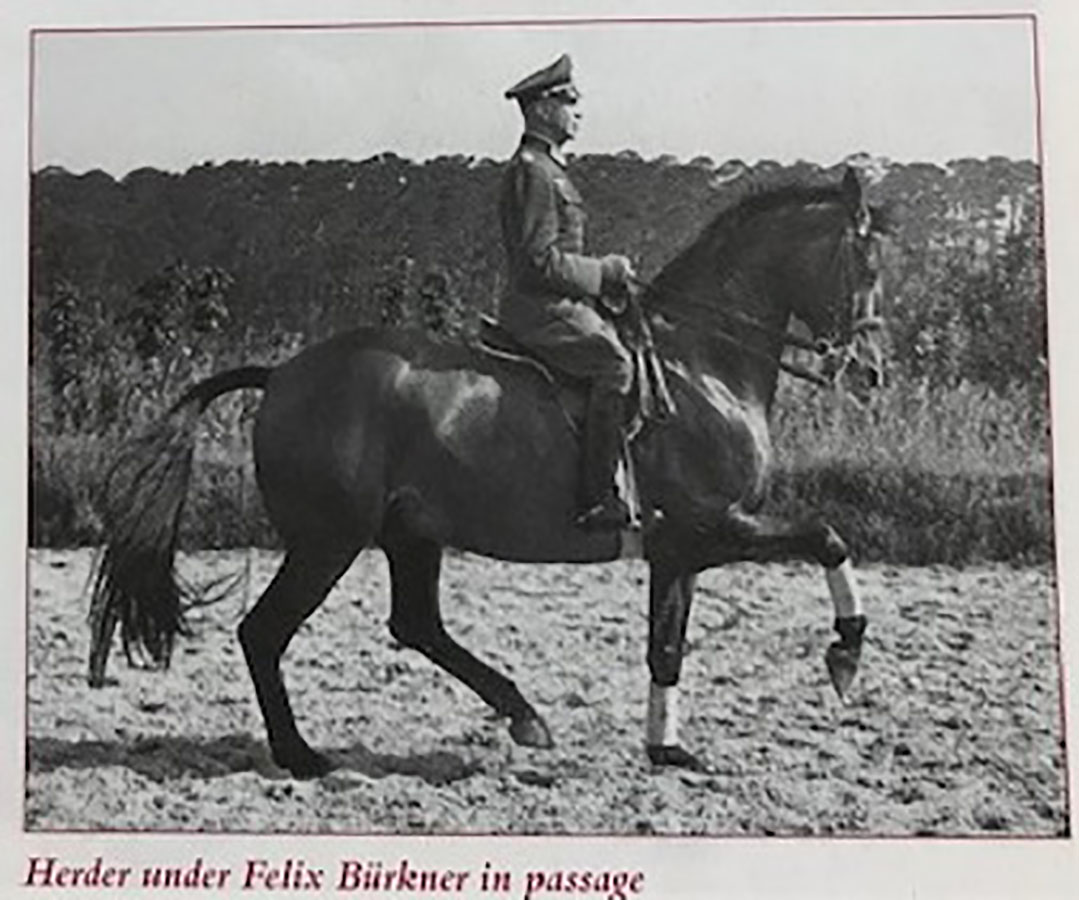 The same horse a little older, working as per diagram 4. 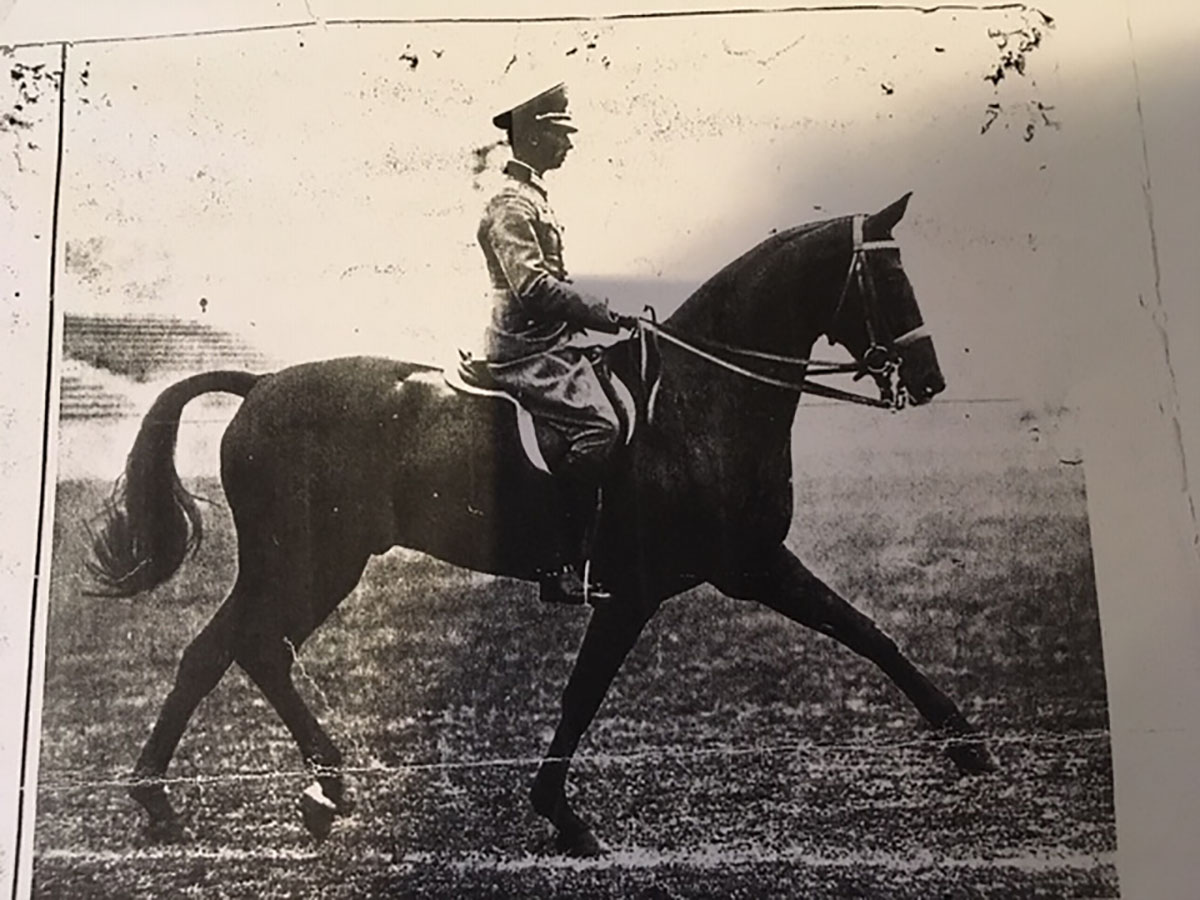 A horse at the training stage of diagram 3.

“The horse should
be capable of carrying
you with ease.”

The mouth should be in line with the entrance point, which is where the last neck vertebrae is connected with the first spinal vertebrae. As this is not easy to see (as the diagram does not show the skeleton), we can look at the hips, which are more visible (look at the line from mouth to hip, marked in the diagrams by the letter X).

Over-flexing the poll and bending the neck downwards with the face behind the vertical should be avoided.

The picture in front of the rider must correspond with the picture behind the rider and vice versa.

Horses who are weak in the back or in the hindquarters can be ridden as in diagram one, a little lower. The amount of flexion must be in relation to the rising of the neck. The lower the neck the less flexion, the higher the neck the more flexion.

I would like to emphasise again that flexing the poll and rounding the neck upwards go together, without showing a convex under neck. The horse that has a long, thin neck needs a rider with good hands to avoid the horse over-flexing downwards and perhaps finishing up with a false kink behind the third neck vertebrae. When this false kink happens, the connection is lost between the front and back — and the aids finish up nowhere.

It is sad to see that many riders deliberately manipulate the face of the horse downwards so it can’t even see where it is going. My thought is that they think it’s correct or are frightened to lose control over the horse. We shouldn’t make “bridling” a horse a specific exercise; it should develop gradually as the horse becomes stronger and more collected, through half-halts.

One of the most common mistakes made by riders is the unhealthy desire to manipulate with their hands. By doing this, the rider merely acts upon the bars of the mouth and will never achieve permeability, but will end up with over-bending the neck.

The prerequisite for collection is a horse which engages the hind legs well under the rider, lowers the hindquarters and takes more weight onto his hind legs. The ultimate goal is piaffe (picture four) and in the case of classical dressage, levade (picture five). EQ