It’s not every day a horse from Australia wins at the prestigious Royal Windsor Show. However, we are living in very different times. When Australian thoroughbred Precedence claimed the Retraining of Racehorses In-Hand class, owner Fiona McIntyre was on cloud nine. 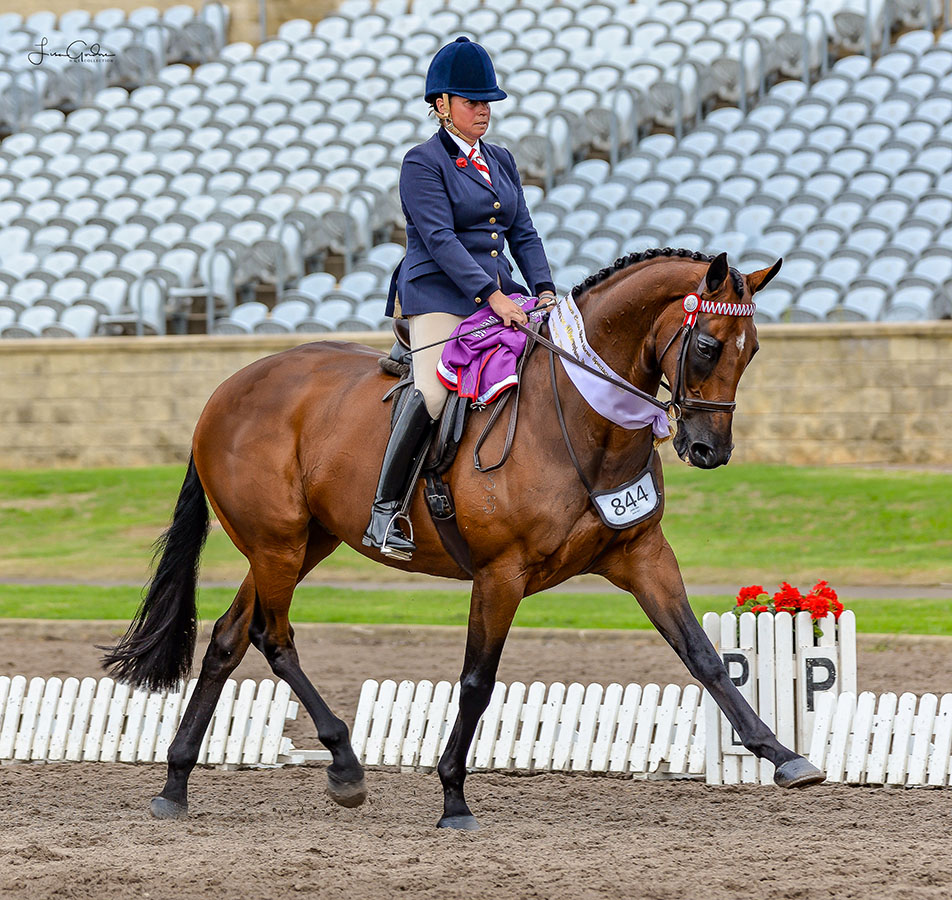 Precedence has been successful in the show ring © LMG Photographics

“He is thoroughbred quality.”

The 2020 Royal Windsor Horse Show was a little different this year. Due to coronavirus, the UK’s largest outdoor horse show was reinvented as a virtual competition that saw 24 photo-based show horse classes attract more than 4,200 entries from around the globe. Adjudicated by experts who normally judge at Royal Windsor, Australian show rider Fiona McIntyre couldn’t resist this unusual opportunity to enter the prestigious event.

When Fiona’s Australian thoroughbred Precedence (Zabeel x Kowtow [Shadeed]) claimed the Retraining of Racehorses In-Hand class, she found the moment surreal. “You’re sitting in your lounge room, and on the other side of the world you’ve got this world-renowned judge calling out the placings. It was really exciting,” she says of the win.

Fiona, who grew up around thoroughbreds with her parents being racehorse trainers, has a long affinity with off-the-track horses. As a Racing Victoria Acknowledged Retrainer, she’s transitioned countless horses from track to show hack. However, a start — and win — at Royal Windsor was a first for the Geelong local.

Many will probably recognise the name Precedence. The dashing bay gelding has not only enjoyed success in the show ring here in Australia, but also contested four Melbourne Cups in his previous career, finishing in the top 10 three times before retiring as a 10-year-old in 2015. He was also the late Bart Cummings’s last Cup runner — and grandson James Cummings’s first.

Fiona knew Precedence long before he walked into her showing stable. “I followed him on the track; he was a real favourite of mine. He was one of Bart’s last horses, so there was that sentimental attachment; I had huge respect for Bart Cummings as a trainer. I was really lucky that I’d previously had, and still have, one of Bart’s other horses — Sirmione, who won the Australian Cup and also ran in a Melbourne Cup.”

When Precedence retired, one of the owners, the Duchess of Bedford, knew that the horse meant a lot to Reg, and so he was offered him. With Sirmione going well in Fiona’s care, she got the call from Reg — and was thrilled to welcome Precedence to her stable.

“He was interesting to start with,” recalls Fiona. “He was renowned on the track for pulling. Anyone who was involved with the horse would tell you he probably would have done a lot better over his career if he behaved a bit better, because he’d start pulling and going too early!

“I’ll never forget the first ride I had on him. I thought, ‘how are we ever going to hold this horse? He was so strong, and really reactive, hot and explosive. I got off him and called the stable, and the response I got was, ‘Well, the track riders used to argue over who was not going to ride him at work!’”

Fiona was concerned he might not make it as a show horse, but to his credit it was simply a matter of him learning the requirements of his new career. “Bless him, the minute I started working on him doing groundwork and then getting him going soft…. it just clicked and he just went, ‘Oh, yes, I can do this!’ We went from using a sweet iron so I had some stopping power, to now just using a beautiful loose ring snaffle. He carries himself and he’s just as soft as butter, which is a beautiful feeling. That being said, he still has some fire in his belly some days!” 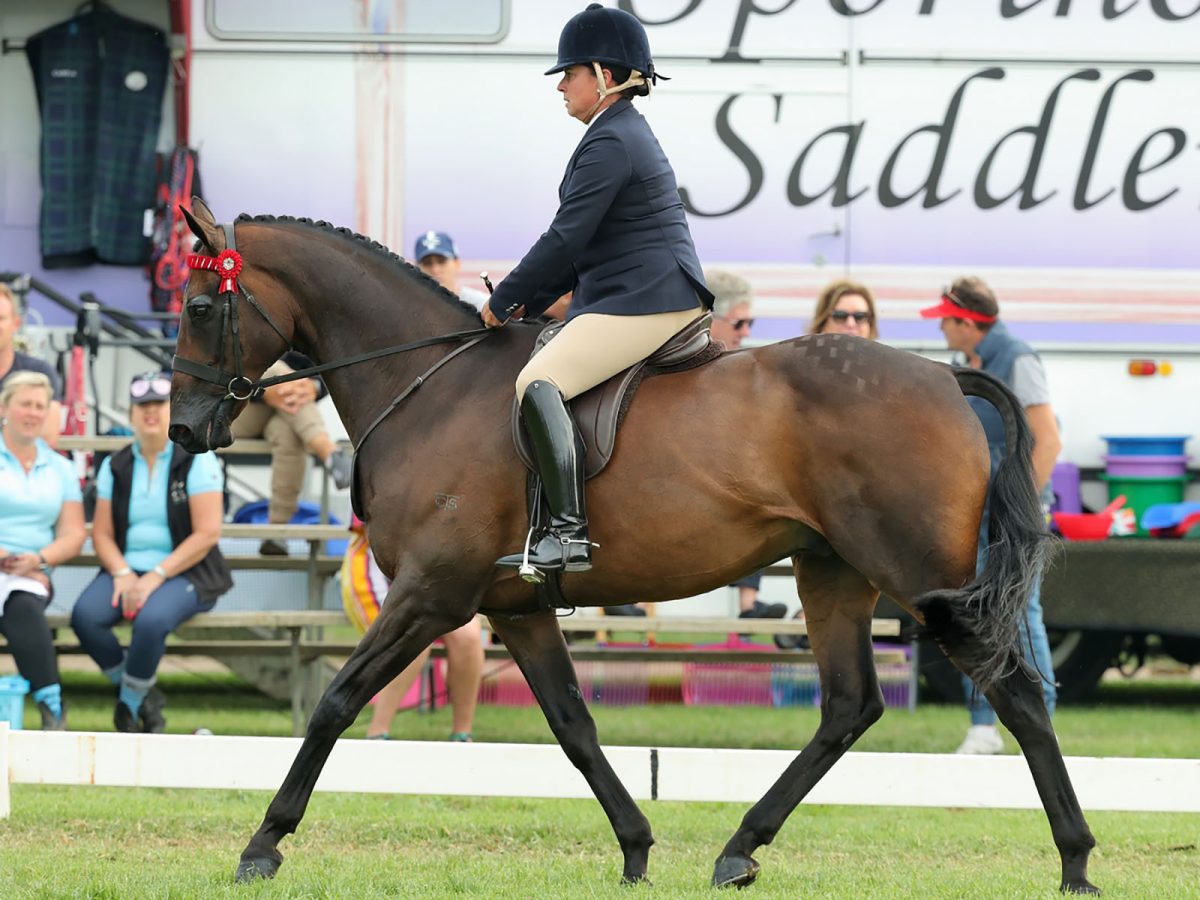 The image that saw Caravan Rolls On place fourth in the ridden class. © Derek O'Leary 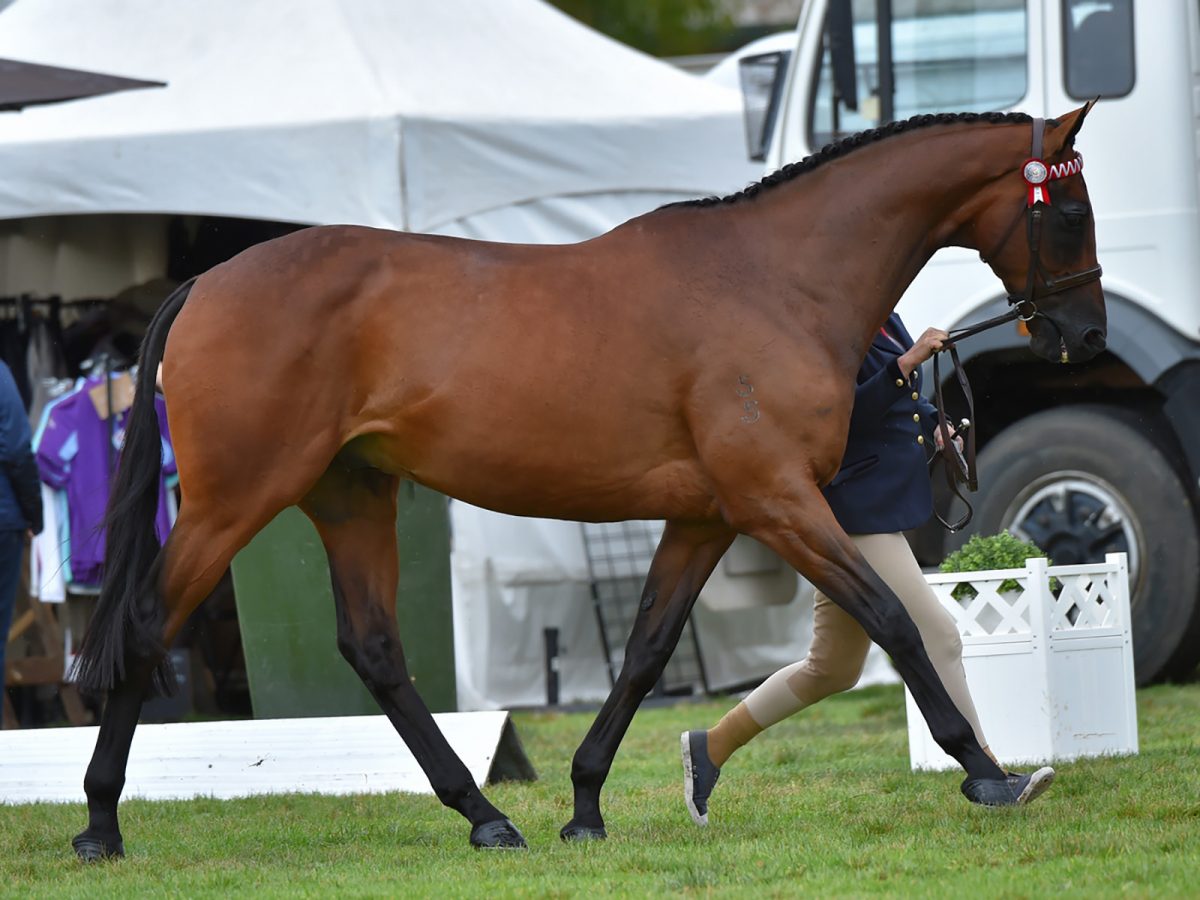 “He was also top 10 in the Pope Cup (class for show horses with thoroughbred qualities at the Sydney Royal Easter Show), where there were nearly 200 entries. He’s also been top 10 in the national off-the-track hack class at the Nationals (Australasian Show Horse & Rider Championships at Werribee),” says Fiona. In addition, Precedence also been in the mix at Royals, and contested two Garryowens. “Even though he’s rising 15, every time he steps out he just gets better and better!”

With the coronavirus pandemic curtailing her plans to head to this year’s Sydney Royal, Fiona took up the opportunity to place Precedence in front of a renowned international judge. “Royal Windsor is the biggest outdoor show in the UK and they were advertising they were going virtual because of the pandemic. I thought why not? Let’s enter some classes. I’d never get the chance to compete there otherwise.”

The judge, chief Royal Windsor showing steward and British Show Horse Association Chairman Nigel Hollings, recognised the horse’s class: “He’s a stunning horse. He is thoroughbred quality. He’s got good limb on him. I mean, look at the bone, the quality bone he has — and I just love the way he had that liberty in such a big horse. He just immediately caught my attention and I would have loved to have judged him in the flesh.”

Good bone and very correct conformation were no doubt reasons why Precedence was able to retire so sound after a 69-start career. “He’s always been super sound,” says Fiona. “That in itself is a real credit to the horse, and he was very well cared for during his racing days.”

“He just immediately
caught my attention.”

Precedence wasn’t the only horse Fiona entered in the virtual show — she also had fellow off-the-track horse Caravan Rolls On (Hernando x Grain Only [Machiavellian]). British-bred, Caravan Rolls On came to Australia in 2013 and enjoyed the majority of his career here with Danny O’Brien. At Virtual Windsor, he finished fourth in the Retraining of Racehorses Ridden class — which was another outstanding effort in a big field. The class was won by fellow Aussie Melissa Molloy and her horse Relmsparc Foxtrot, with another Aussie, Ava Halloran, third on Muse.

Caravan came through Racing Victoria’s Off The Track program, and for Equine Welfare Officer Sam Davison, it was a special case. Previously a track work rider for O’Brien, she worked with the horse for a year and half, and built quite a rapport with him. “He was a cheeky little character…. he was still a stallion at the time he was racing. He was a little bit quirky and he loved himself… absolutely loved himself. You would ride him out and he would pump himself up if other horses came near him, because he thought he was amazing. He always had a real presence about him.”

Caravan was originally rehomed straight from his racing owners to a stud, where he worked as a breeding stallion for polo ponies, before being gelded and moving into a career as a riding horse. He didn’t gel with his first rider, and it was then that Off The Track stepped in to help find a more suitable home. When Fiona saw the photos of him via email, she thought he had potential, and since then she’s fallen in love with the quirky character that charmed Sam on the racetrack. 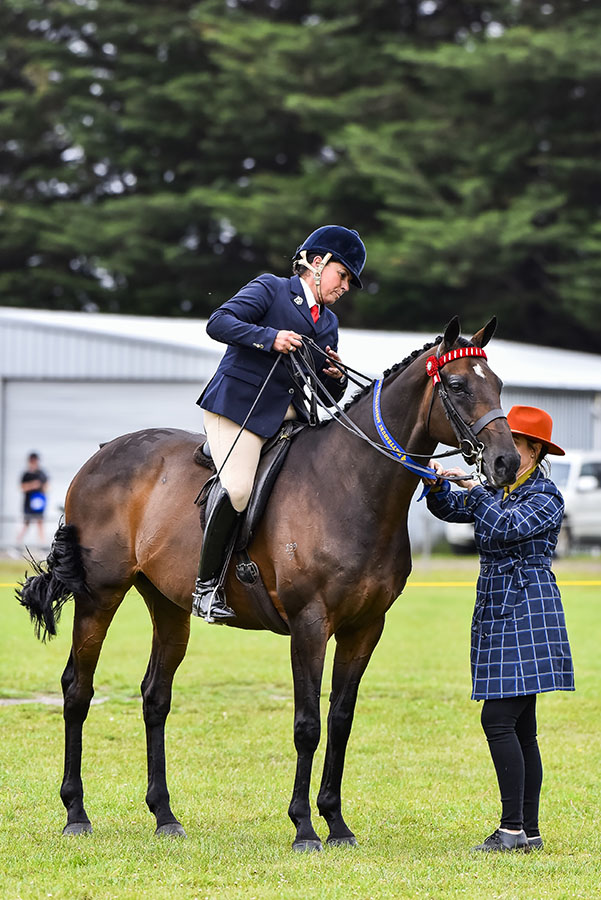 Since taking him on in September 2018, Fiona has built a strong partnership with him. “He’s been absolutely fabulous. I tend to approach all my horses as individuals, and you soon work out their personalities and what you can and can’t do, and what is the best approach to each horse. He’s just entertaining — he’s an entertainer!”

Caravan is relatively new to the show ring, having just finished his Newcomer season at Barastoc Horse of the Year show in February. His first show was the 2018 Royal Geelong Show, where he won Champion Led Thoroughbred; it was only a stone’s throw from Geelong Racecourse where he won a Geelong Cup. “He won the First Season Saddle Hack at the VAS Saddle Horse Championships. He then went straight into the Off The Track Newcomer class and won that as well. That was brilliant. So he did enjoy some success in his first season,” says Fiona.

For Sam, watching Caravan’s show ring success with his loving owner has been a real thrill. “It’s so satisfying seeing him doing so well now, and knowing that you helped him along the way. We had a really good connection when I was working at Danny’s and I looked after him every day… So it’s great to see that he’s also built a great connection with Fiona and doing so well out on the circuit. I’m so proud of him, and Fiona has done an amazing job. And he’s still got his cheeky character… I don’t think that’ll change!”

For Precedence and Caravan, Virtual Windsor was a wonderful way to gain accolades and recognition — without having to lift a hoof. “They are having a bit of a rest; both are still stabled of an evening, but they’re having some time off,” says Fiona. “I’ve actually been working on two new off-the-trackers, so it (coronavirus lockdown) has given me a bit more time to spend with the horses around my full-time job.”

Enjoying a lifelong career in the show ring and around thoroughbreds, Fiona still loves the thrill of turning a racehorse into a show horse. “What I love about the off the track horses is finding that diamond in the rough. The two that I’m working on at the moment… when you first look at them, you wouldn’t think anything much of them and then as they start to develop, this diamond starts to shine and it’s a really satisfying process. I love taking the before and after photos!”

Fiona clearly has a great eye for off-the-track horses, and she has some great tips for those trying to pick their next show ring star: “They’ve got to have that presence. The movement is something else that I’m quite particular about. You can pick that up, even at the walk…. if they’re really tracking up and over-tracking then they catch your eye. But I guess it’s that overall look of the horse; I get captured by the beauty of particular horses. I love a horse with good conformation that’s set beautifully and naturally.

“Thoroughbreds are just magnificent animals and I think they’re the most graceful of all the horse breeds, particularly as a show horse. They’ve just got it; they’re the complete package and they’ve got that real ‘look at me’ presence about them. There’s nothing better than seeing a beautiful thoroughbred on show.” EQ

AUSSIES MAKE THEIR MARK AT WINDSOR

Fiona and her OTT horses, Precedence and Caravan Rolls On, were in good company with their success at Virtual Windsor. Queen Elizabeth had several horses entered, winning the Cleveland Bay and Side Saddle classes — however, a number of Aussies also impressed the judges and made the final rounds of competition!

Melissa Molloy and thoroughbred Relmsparc Foxtrot won the Retraining of Racehorses Ridden class, which was a truly amazing effort.

Ava Halloran and Muse were third in the Retraining of Racehorses Ridden class, and finalists in the Show Hack & Riding Horse class where they finished in the top 10 out of more than 200 entries. Virtual Windsor was a very successful event for the Australian thoroughbreds!