Great Australian showjumper and Olympian George Sanna may have retired from the competition circuit, but he is getting just as much pleasure in imparting his knowledge on to new riders as a coach. 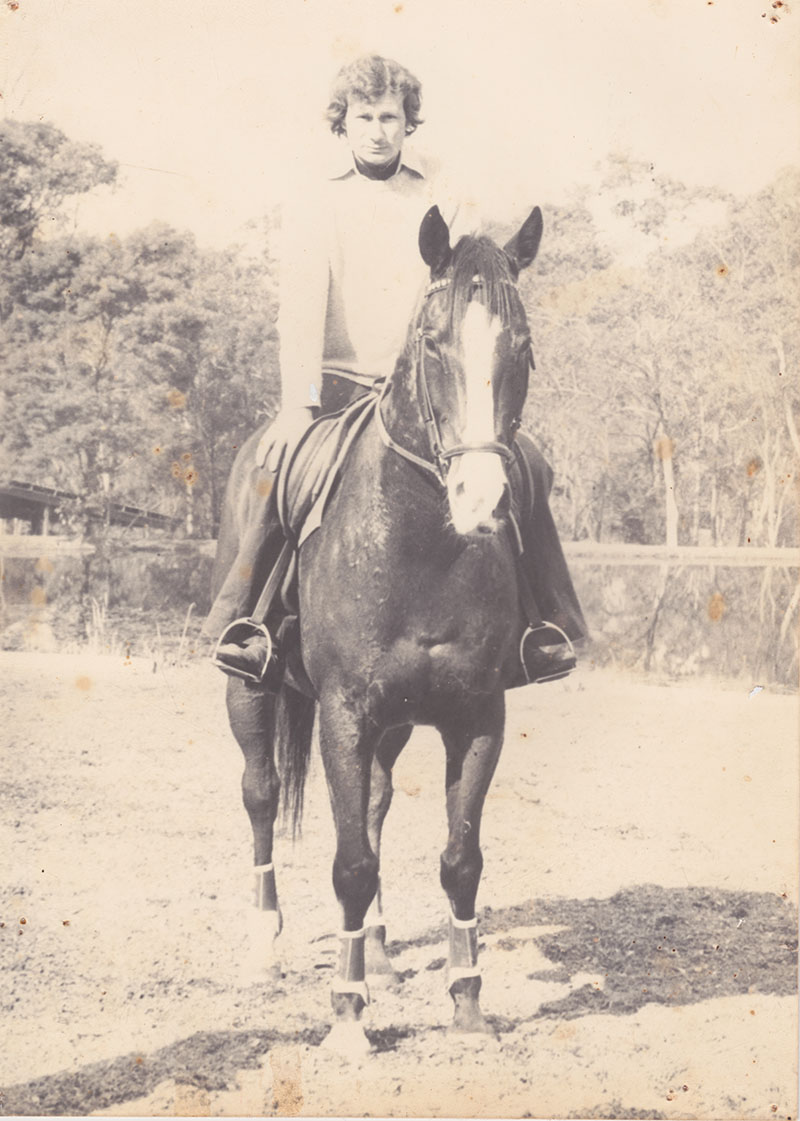 Life as a competitive rider cannot go on forever, as with age come myriad reasons why riding at the top level can come to an end. Not only with riders, but with top horses. It is always interesting to hear the progression of these riders and follow their path in their equestrian pursuits.

George’s father was a serious horseman in Hungary before emigrating to Australia after World War II. With his cavalry background he became a very well-respected riding coach, and of course George followed in his footsteps, becoming one of Australia’s leading showjumping riders.

George studied law at Monash University and Tasmania University (where they moved for about four years) and has a law degree and did his articles in Sydney. Not that he ever practiced; showjumping was his life and passion. He married his first wife, Sue Steindl, in 1975 and they lived in Oakville, NSW. In 1977 they bit the bullet and took a showjumper named Tric Trac overseas. They stayed in the United Kingdom and competed for a short time in England, before heading over to Europe. Tric Trac, who was an off-the-track thoroughbred, competed in the Nations Cup at Rotterdam before being sold in Belgium shortly after.

They returned to Australia and shortly afterwards bought the Oakville property, where they coached, ran clinics and had a succession of horses that were turned over, and rode the famous jumper Johnny Mac for a while as they established themselves. Equestrian Bloodstock Agency (EBA) was established in 1983 and was based at the Oakville property with partners John McMillan and Rod Brown.

Seven years later it was a new set of thoroughbreds for George, in King Omega and Kite. He set off to Europe to compete in the World Cup Final in Gothenburg in early 1984, and then went on to represent Australia at the Los Angeles Olympics that year. King Omega was bought by Alan Bond in 1983, with the view to George riding him at the Olympics and then Alan’s daughter Suzanne would take over the ride. George actually rode his own horse, Kite, at the Olympics and for team reasons Jeff McVean rode King Omega. On returning, EBA grew and developed a very strong performance horse export business to Asia, particularly to Japan where they were selling over 50 horses a year.

Chatham Park was purchased by George and his second wife, Jenelle, in 1986. Chatham Park is a 42-acre property at Glossodia, about an hour’s drive west of Sydney at the foot of the Blue Mountains. John French and Graham Campbell of Lojon Pty Ltd originally developed the property; Colleen Brook produced horses for them with the most famous being Carlbrook Rebound.

During this time George and Jenelle had a son Harry, who was never interested in following his father’s passion but has become a talented videographer, director and journalist, recently producing an amazing documentary on his experiences embedded with the American troops in Afghanistan. Trauma is available via iTunes and a range of other video streaming services.

For the Seoul Olympics in 1988, George took EBA Schnapps and Rod took the thoroughbred mare EBA Slinky, who was subsequently sold to George Morris. The following year George Sanna won the World Cup League with Schnapps in Australia and went to Tampa, Florida, for the World Cup Final. The horse was subsequently sold to Michael Matz, the leading USA rider at that time. 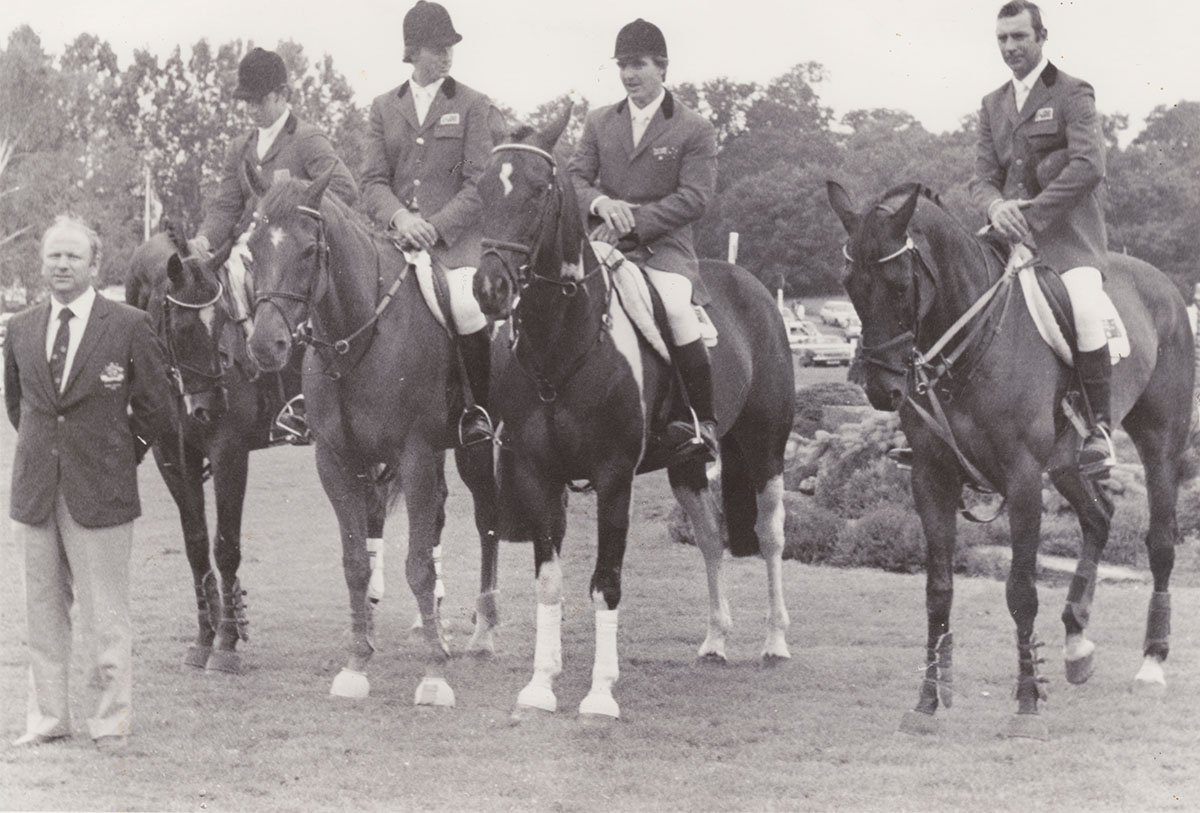 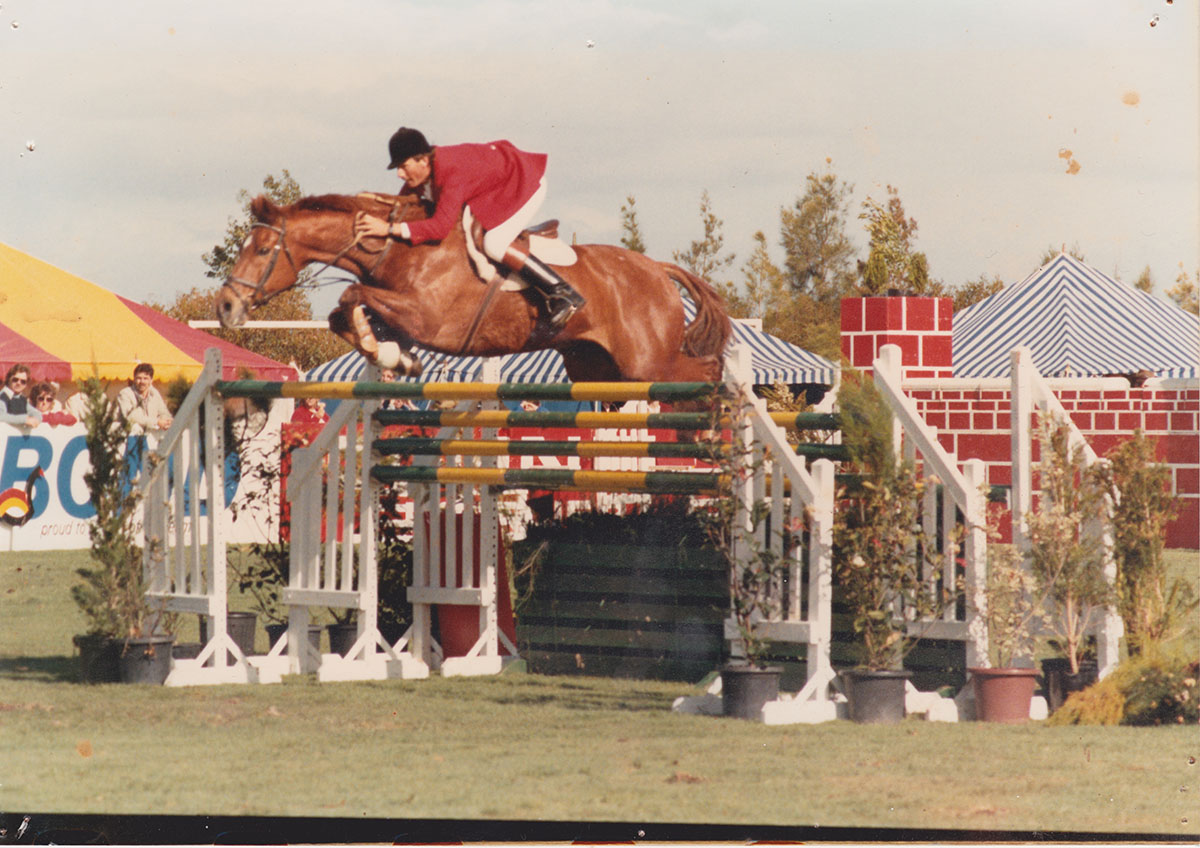 George and Kite jumping in the Bond Derby during the Bond series. 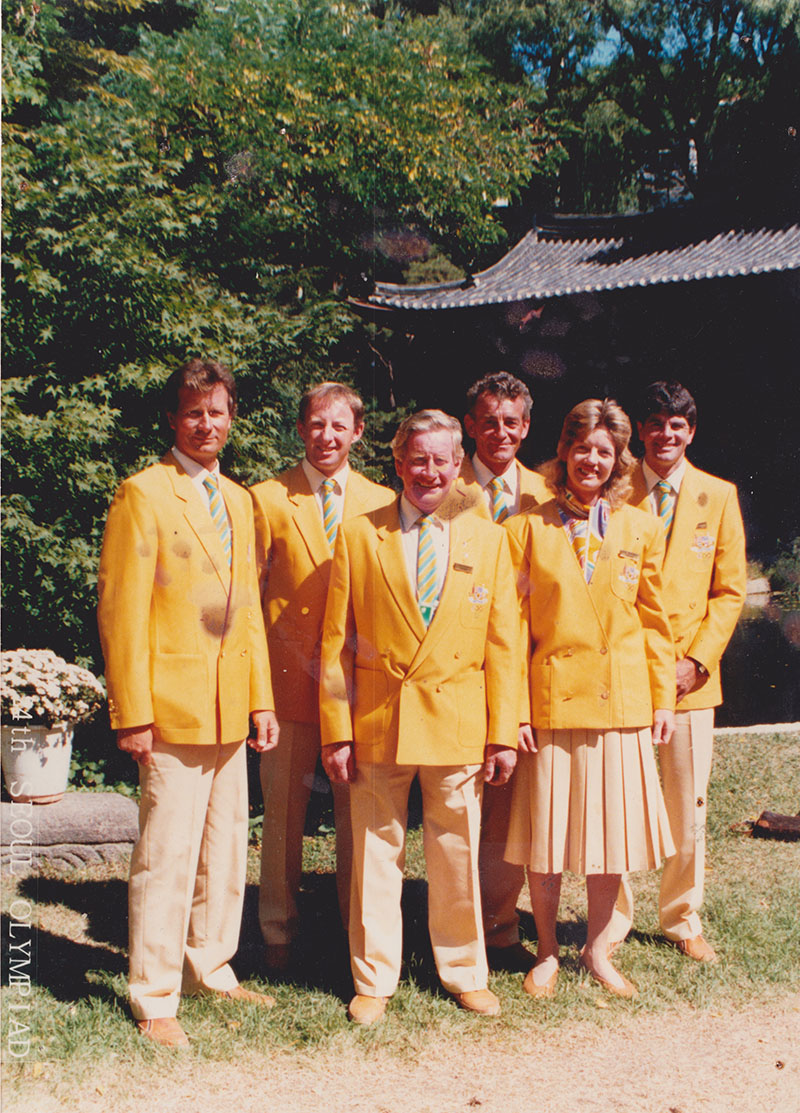 During the EBA days, showjumping was booming with huge competitions, and during the (Alan) Bond and (Laurie) Connell times there was a lot of buying and selling of horses within Australia and overseas. George continued to ride and win championships and was the leading rider in Australia at that time. He took horses to the 1990 WEG in Stockholm and rode the amazing mare Evita to win the Consolation class there, as well as EBA Spectre. The latter was eventually sold overseas, while Evita came home and has produced many good progeny.

In 1993 George took HAS Schalkaar to the World Cup Final in Gothenburg after winning the league here, and taking over the ride from an injured Robert Hines. They were second in the Grand Prix on the final day, with the horse then being sold to Irish Olympian Eddie Macken.

EBA ran its course and the partners went their separate ways in 1992. George kept the property and started Sanna Equestrian Bloodstock, which became one of the biggest names in showjumping in Australia and internationally. George continued to produce many international horses and bought and sold horses overseas. It was at this time that he started to coach a lot more. His passion for the simple approach to what is a complicated sport saw him produce many top riders — in fact Edwina Tops-Alexander was one of his pupils when she was a young rider. George and Edwina headed to Belgium to train, taking Nonix Le Parc for George and Mr Dundee for Edwina. After the WEG in Rome in 1998, George returned to Chatham Park while Edwina stayed on in Europe and is now a legendary internationally acclaimed showjumping rider living in Holland.

A KNACK FOR COACHING

George has coached many keen young riders to national champion status. He has also an uncanny knack of being able to source the right horses to suit his pupils, and being an Olympian himself he instills a great work ethic into those he coaches. He ran clinics interstate and from Chatham Park, and to watch him coach — whether it is an Olympian or a junior Pony Club rider — the enthusiasm never wanes. He is truly passionate and so eloquent with words and the mental approach to the sport; it is no wonder that he is one of the most sought-after coaches in Australia.

Above all, he is positive towards every person he helps and instills confidence in them and is always enthusiastic for their improvement. George was EA Coach of the Year and was also the National Coaching Coordinator for some years. He was on the committee to design the 2000 Sydney Olympic equestrian facility and has always been on showjumping committees, pushing the way forward for showjumping in Australia. 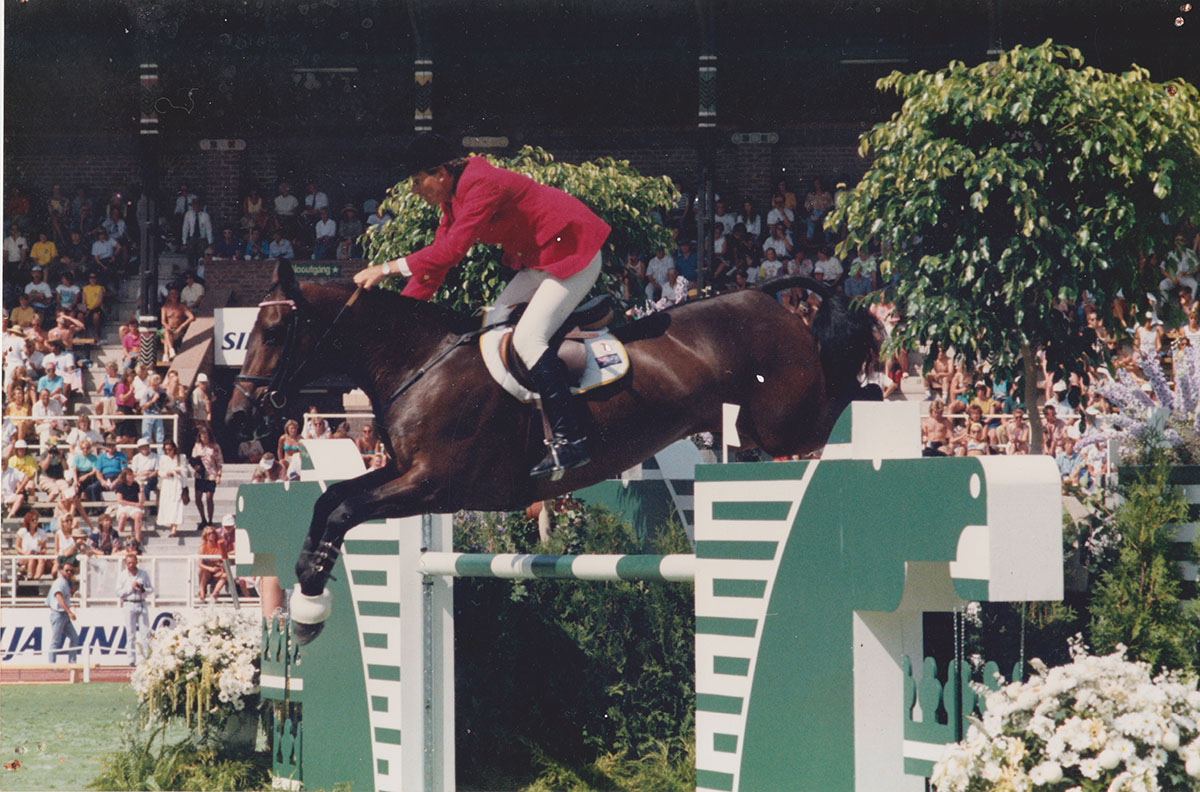 Evita, with George in the saddle, jumping at the Stockholm World Equestrian Games where she was winner of the consolation class. 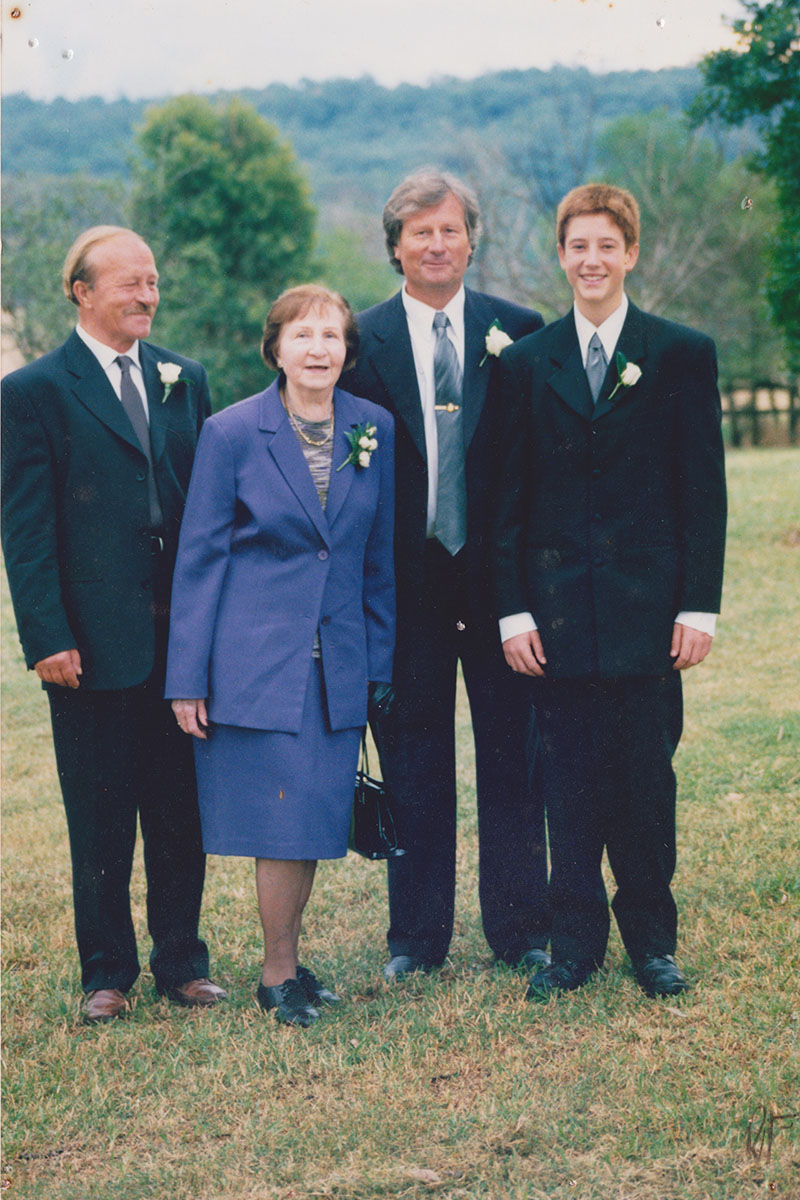 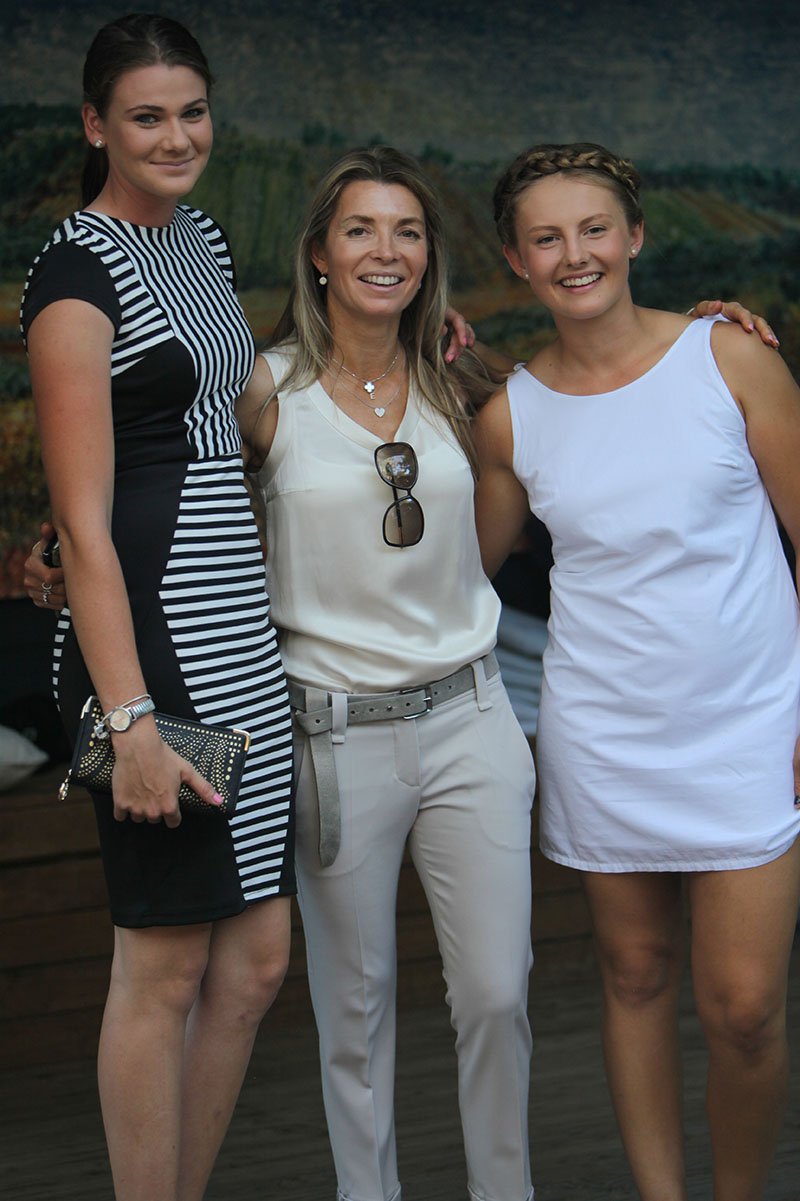 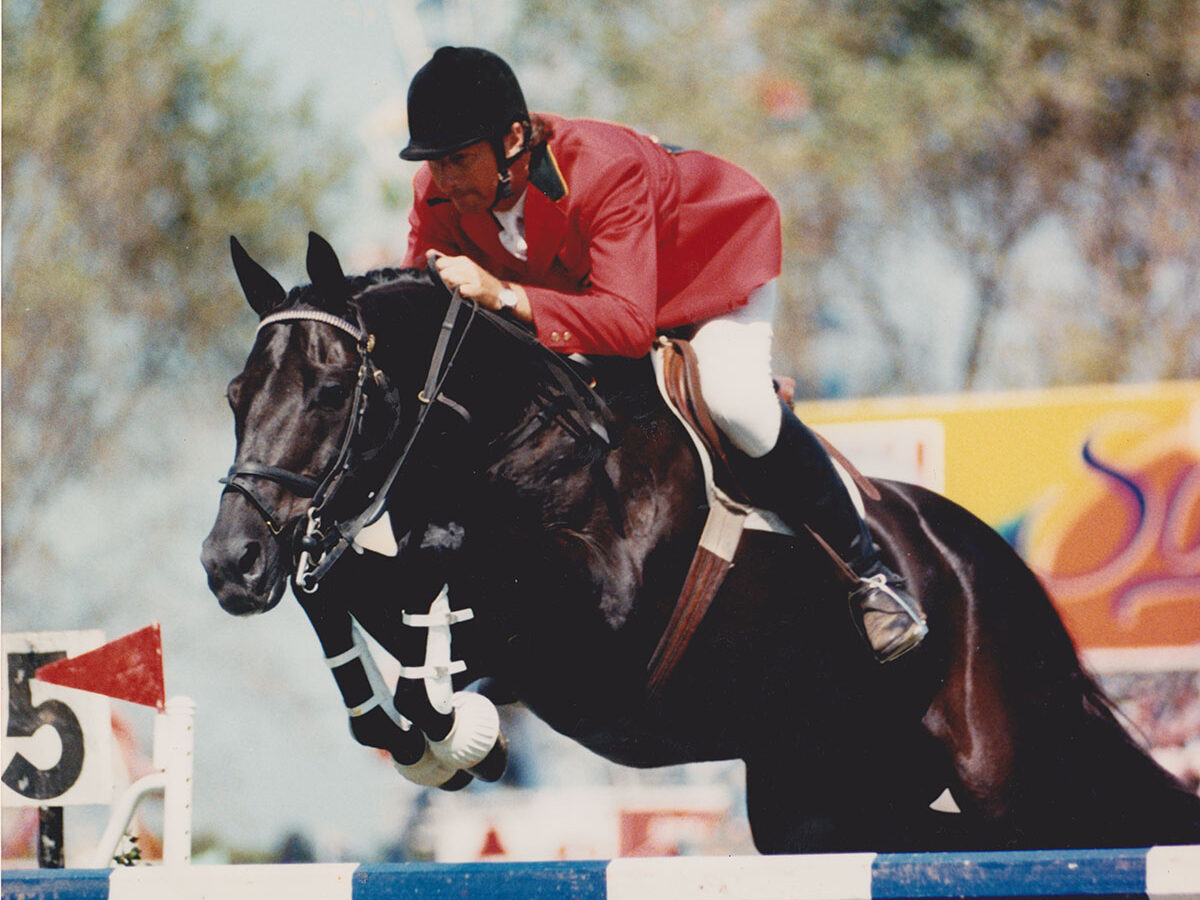 “To be able to impart
my feelings and experience
is a pleasure now.”

Students who made it the top with his input include Edwina Tops-Alexander, Amber Fuller, Julia Hargreaves, Suzanne Bond, Emily Blinkworth, Jamie Winning, Michelle Lang-McMahon, and Savannah Hopkinson, to mention a few, but George being modest says little about his achievements.

Horses like Boxster (who also competed successfully in eventing with Stuart Tinney) won the Australian Championships and George took him to the States where he won numerous classes and was sold. In the interim there were amazing horse like Turf Master, Will, and the aforementioned Nonix, to mention a great trio during the mid-90s!

George’s last horse was a mare that he imported named CP Aprilla. He took her overseas to sell and she won the Dubai Derby, but suffered an injury and so returned home. On her return she was ridden by Sharon Slater, as by that time George had stopped riding; together they were successful at Grand Prix level. Over the competitive years, George has had many minor injuries but a groin injury suffered from a horse shying out from under him put a long stop to his riding. After having it treated extensively in Europe while he was there, it came good, but it was his back that was the reason he finally hung up his riding boots. 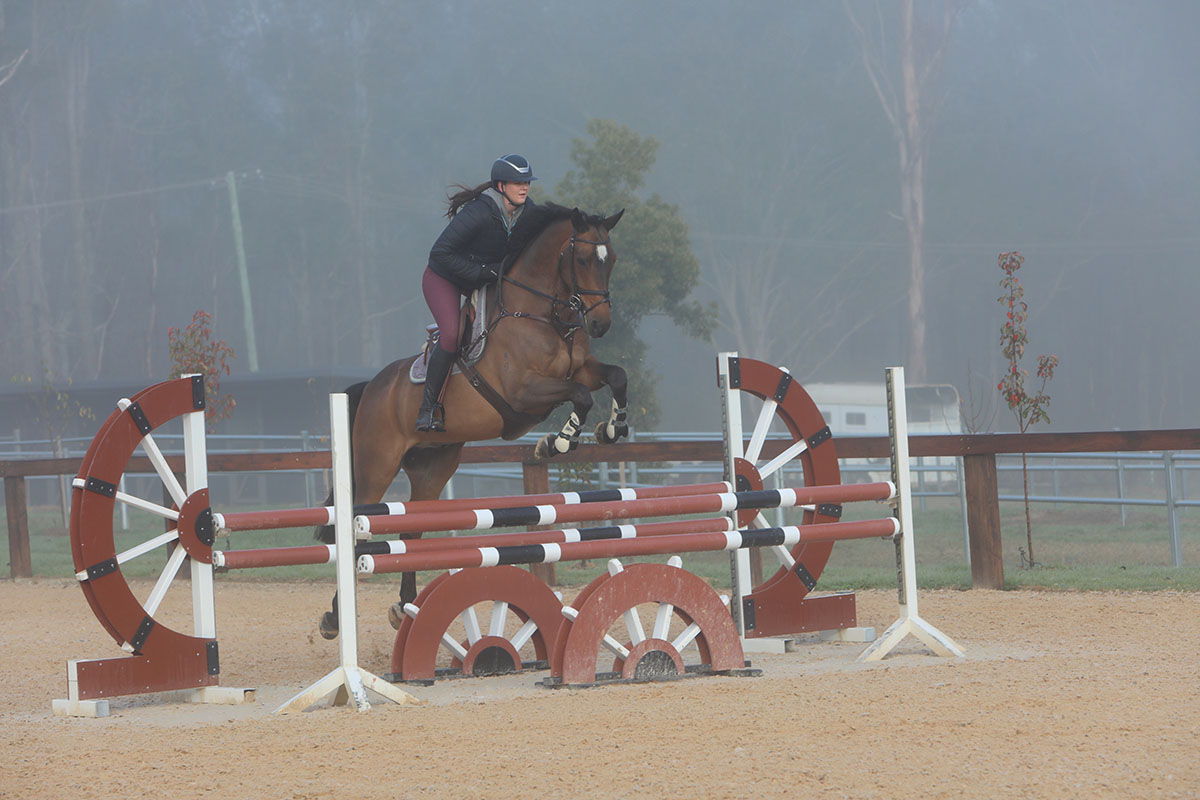 Kate Hinschen, one of the young riders at Chatham Park. © Roger Fitzhardinge 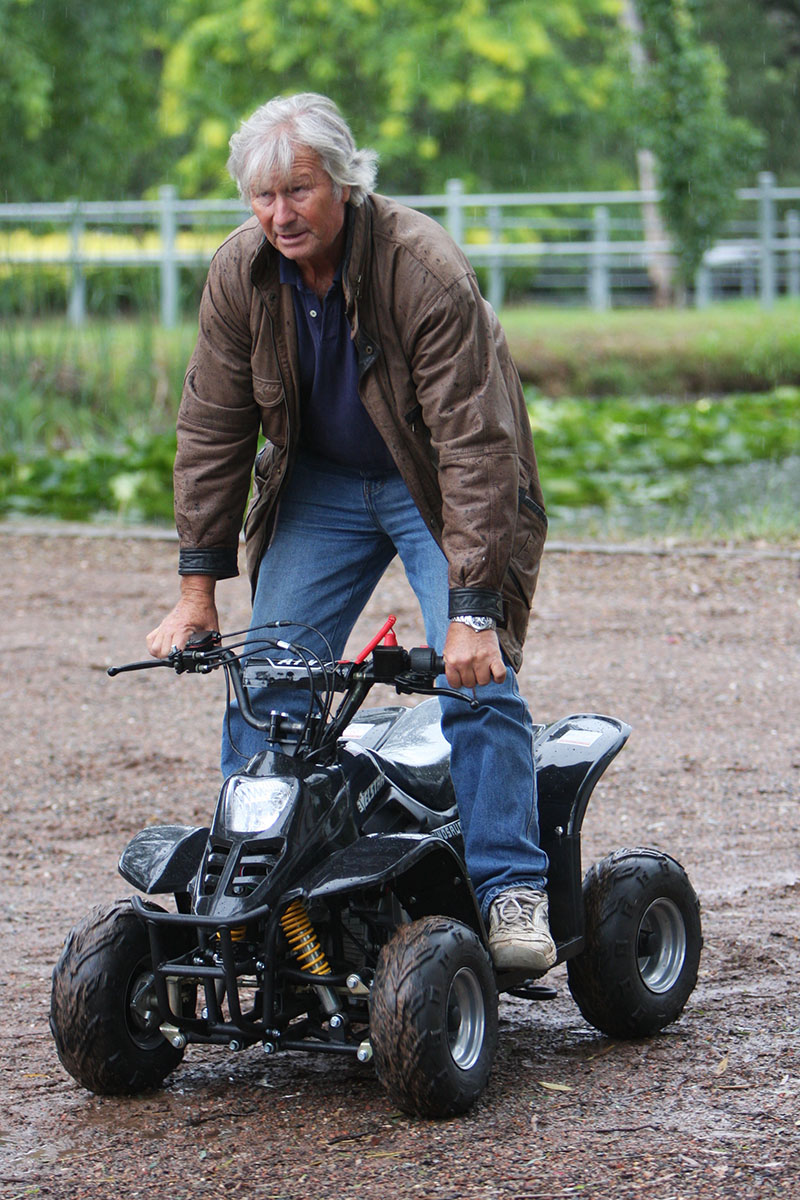 George with a new mode of transport at Chatham Park. © Roger Fitzhardinge 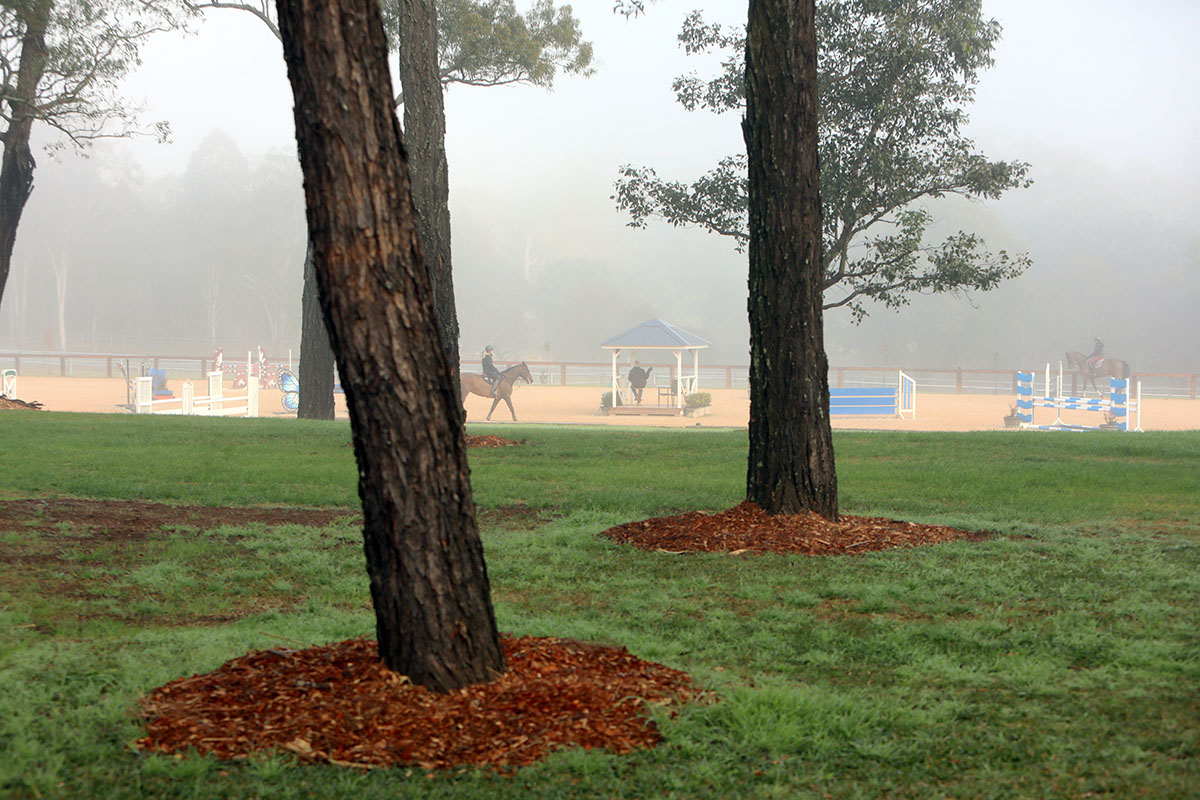 George on the new arena at Chatham Park. © Roger Fitzhardinge

George’s life turned from being an active rider to one who spends his days on the arena at Chatham Park coaching. In 2018, Hamish Douglass — head of Magellan Financial Group and father of George’s student, Amelia Douglass — offered to buy Chatham Park and retain George as his daughter’s full-time coach along with three other students. Chatham Park is now in the throes of having a makeover with huge infrastructure changes. It is going to be an amazing training facility for the future.

The concept now at Chatham Park is to do as much as possible for the sport and already they produce horses and riders to the highest possible level and hopefully Olympic representation. They aim to do a lot for the sport and already the Australia Jumping Teams League (AJTL), sponsored by Chatham Park, has created enormous interest and gained TV coverage. On top of that, Chatham Park is now the major naming rights sponsor of the Summer Classic in December, run by Jumping NSW.

I asked George whether he missed the competing and riding that was so much of his life. “You can’t keep riding forever and we are lucky to be able to compete in this sport for as long as I have, winning a national Championship in my late 50s,” he says.

“I have to say that I don’t miss riding at all as the last few years were physically hard going even though I did enjoy competing. To be able to pass on the experiences I have gained over the years is a pleasure now. Nowadays, I can simply walk down to my arena and enjoy a wonderful group of fabulous horses and talented riders. Everything has its time and it’s my time to enjoy my life of coaching. It’s a progression and a great one for me. I am lucky to have done what I have and still can.”

How does he think the coronavirus pandemic is going to affect the sport? “I think it’s just a pause and we are still keeping horses in work in relays and with keen riders to compete we have a chance to reinforce the basics and to recalibrate without the pressure of competition.”

How does George keep his riders competitive without competition? “Competition can’t be duplicated but we have days of jump-off rounds and the young horses are kept up to the heights that are expected at their level, and when they go out they are up to the level.”

George Sanna is living the dream and a natural progression that any competitive rider or sports person could hope for. His life has seen so many experiences and changes in the sport, changes in transporting horses and the values that are associated with the sport from the grass roots where he started, to competing for Australia at Olympic level. And now to help and perhaps see a student through from scratch to the top and attend an Olympics at another level. What an amazing life and this only touches on the surface of this talented and remarkable man. EQ