WITH GEORGE SANNA
content placeholder
The Stadio dei Marmi is in the shadow of the Stadio Olimpico from the 1960 Rome Olympics. © Michelle Terlato Photography
Previous
Next

With international travel off the cards for some time and the Longines Global Champions Tour on hold until 2021, we take a look back at one of the tour’s most unique and impressive legs at the “Stadium of Marble” in Rome.

Click here to learn more about antioxidants, and find the right KER solution for your horse

“Each one portrays an
athlete in a different
sporting activity.”

North of the city of Rome, in the shadow of the terracotta-coloured Stadio Olimpico, is the stunning amphitheatre-style Stadio dei Marmi, which once a year plays host to an ultimate leg of the Longines Global Champions Show-Jumping Tour.

The classical Stadio dei Marmi, or Stadium of Marble, transforms from a sports athletics track to a magical gladiatorial style setting for the best-of-the-best of the world’s equestrians. A more appropriate setting could not exist for a showjumping showdown, four days of competition culminating in the Grand Prix of Rome with a €300,000 prize. No wonder it’s one of the favourite destinations for competitors, officials and crowds alike.

The stadium is surrounded by Carrara marble steps, which serve as seats for the warm-up area for spectators and a consistent backdrop. However, the absolute highlight are the 60 towering athletic marble statues that surround the arena and look down upon all performing there, like gods from heaven. They are incredibly impressive standing over five metres high, of solid marble and in classical Roman style. Each one portrays an athlete in a different sporting activity, providing the perfect setting for any competition.

The Italian weather obliged, too, and in the hot Roman September sun the spectators vigorously sought seats in the shade. Hats, fans and water bottles were de rigueur as was a mobile phone! A wonderful feature of GCT is that admission is free for spectators and the Roman crowds came to show their support. It was a full house every day with every vantage point taken as equestrian enthusiasts, wandering tourists and intrigued locals alike came to the arena to observe the exceptional setting for showjumping. 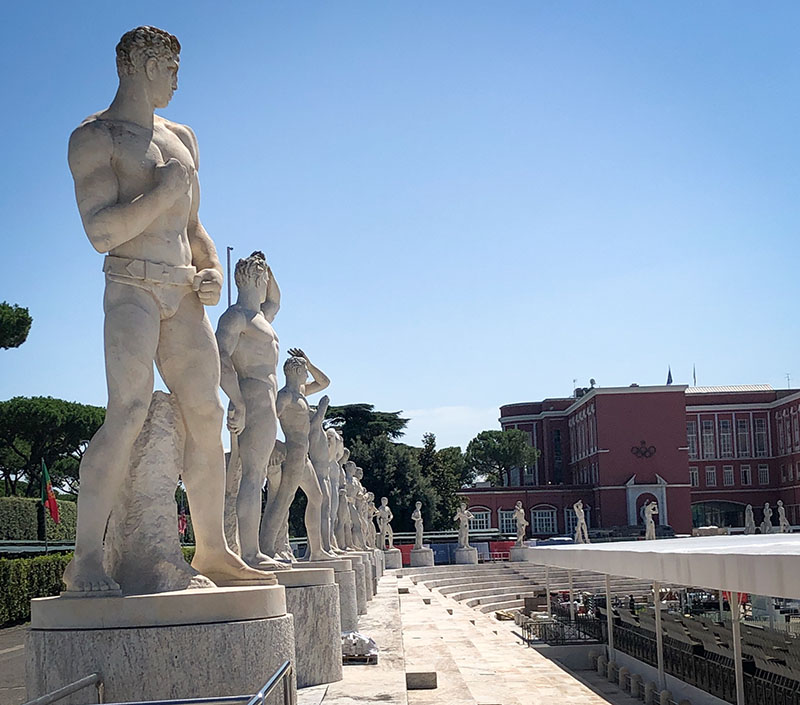 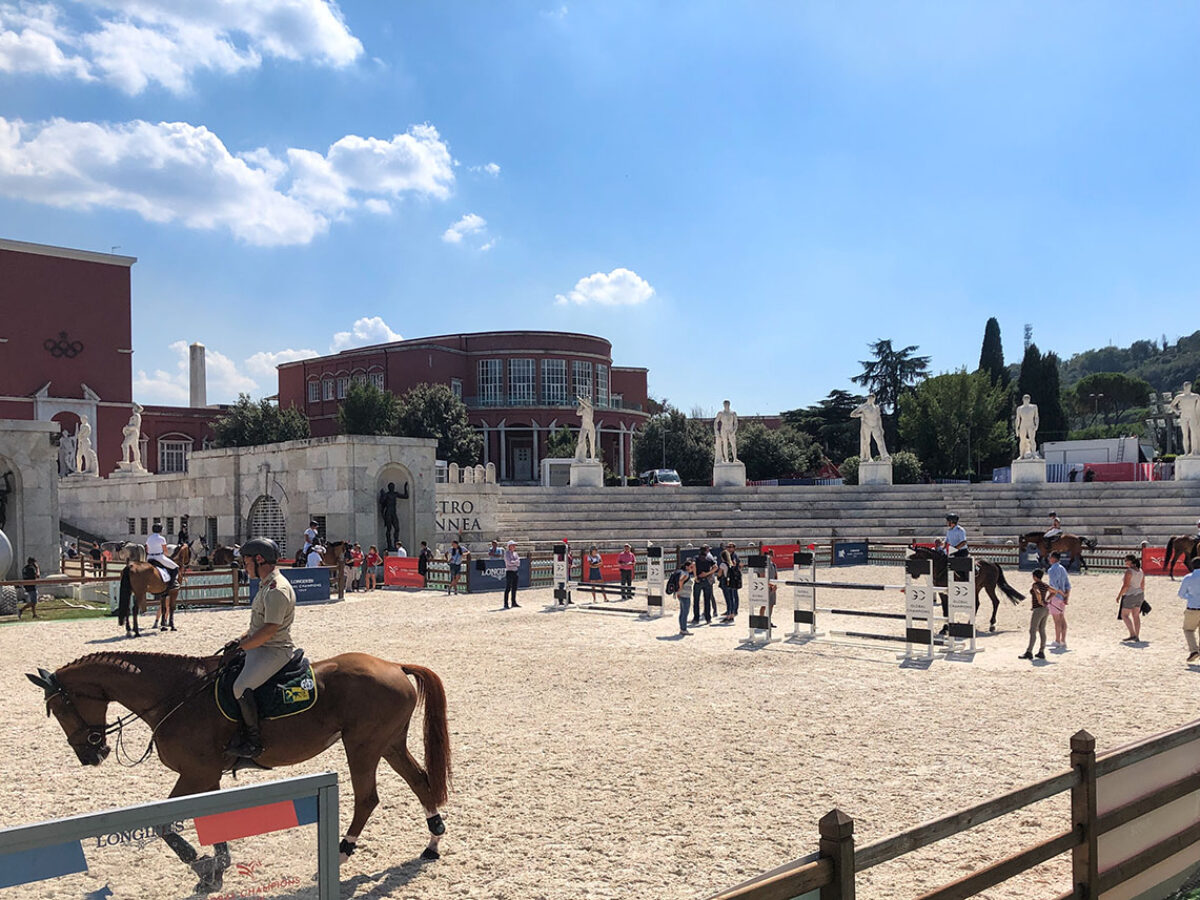 The warm up arena with stone steps. © Michelle Terlato Photography 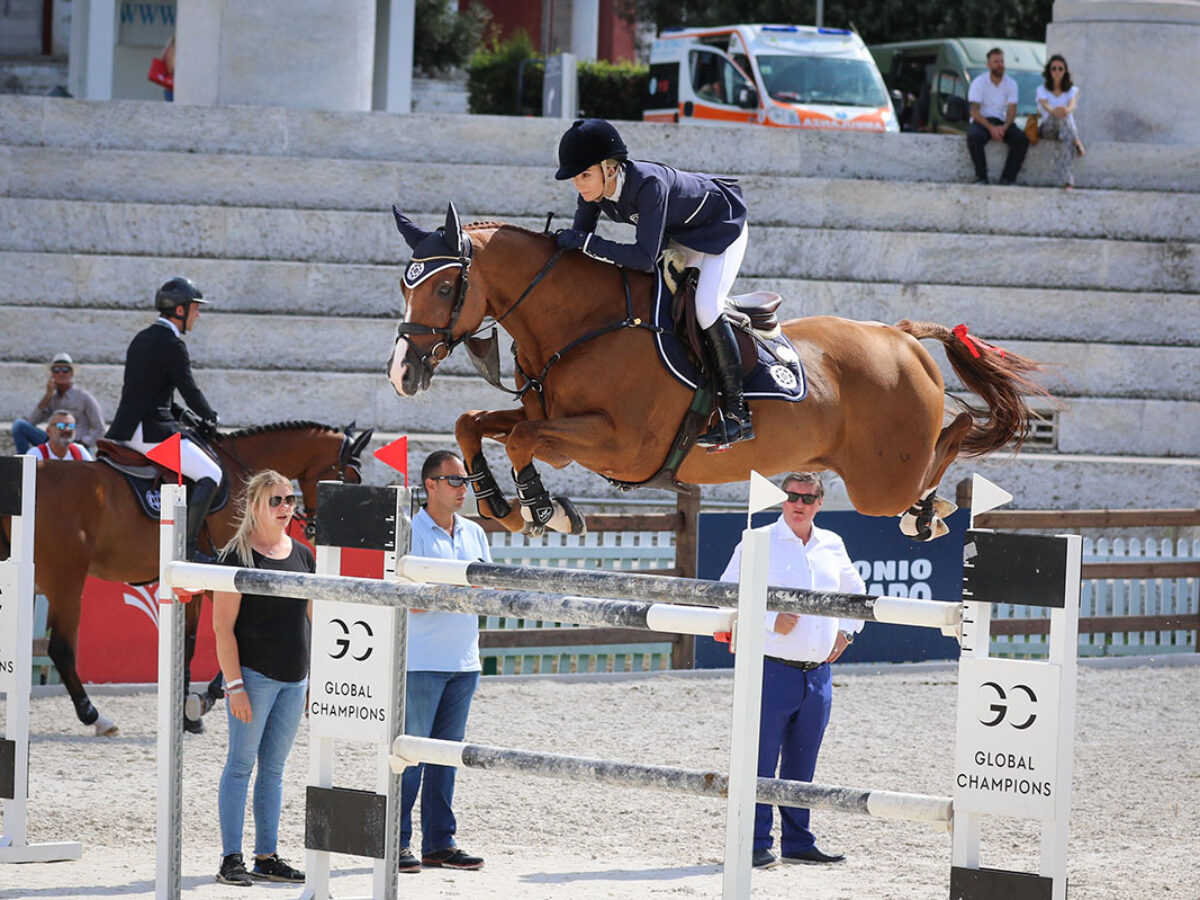 Edwina Alexander warming up in preperation for competing with her husband and GCT founder Jan Tops watching on. © Michelle Terlato Photography 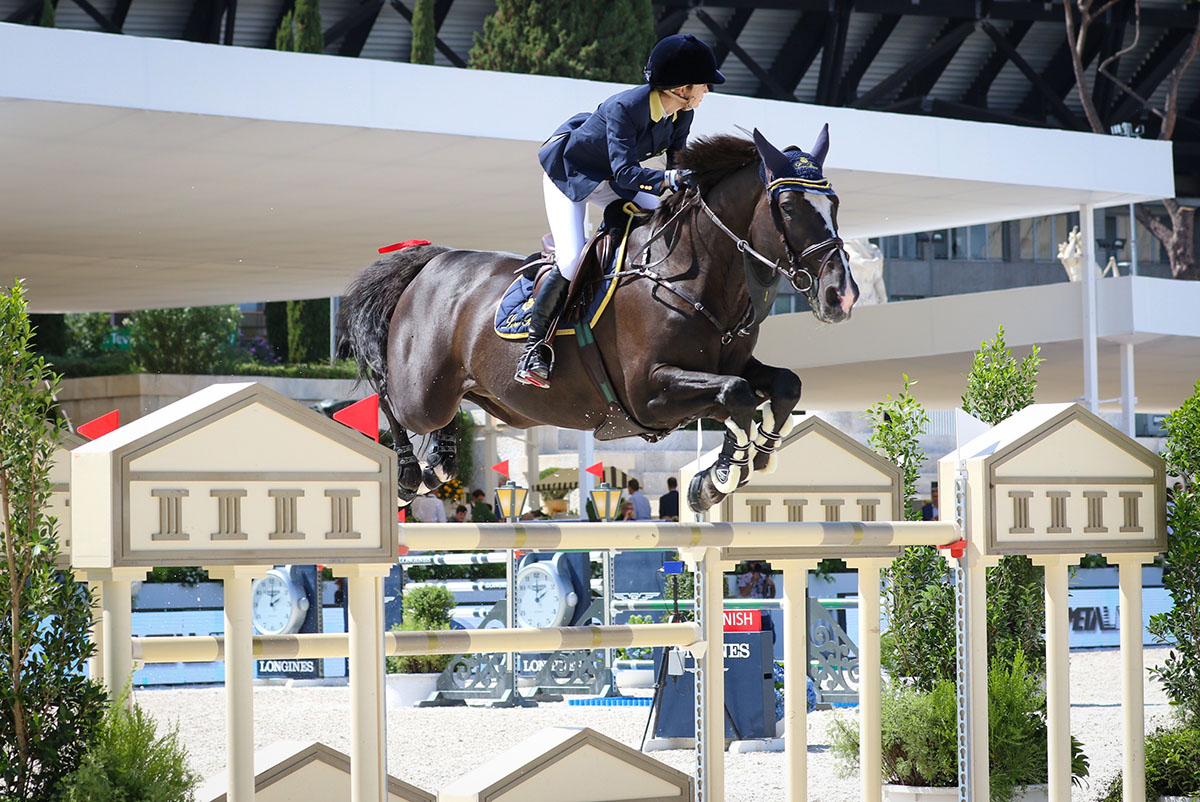 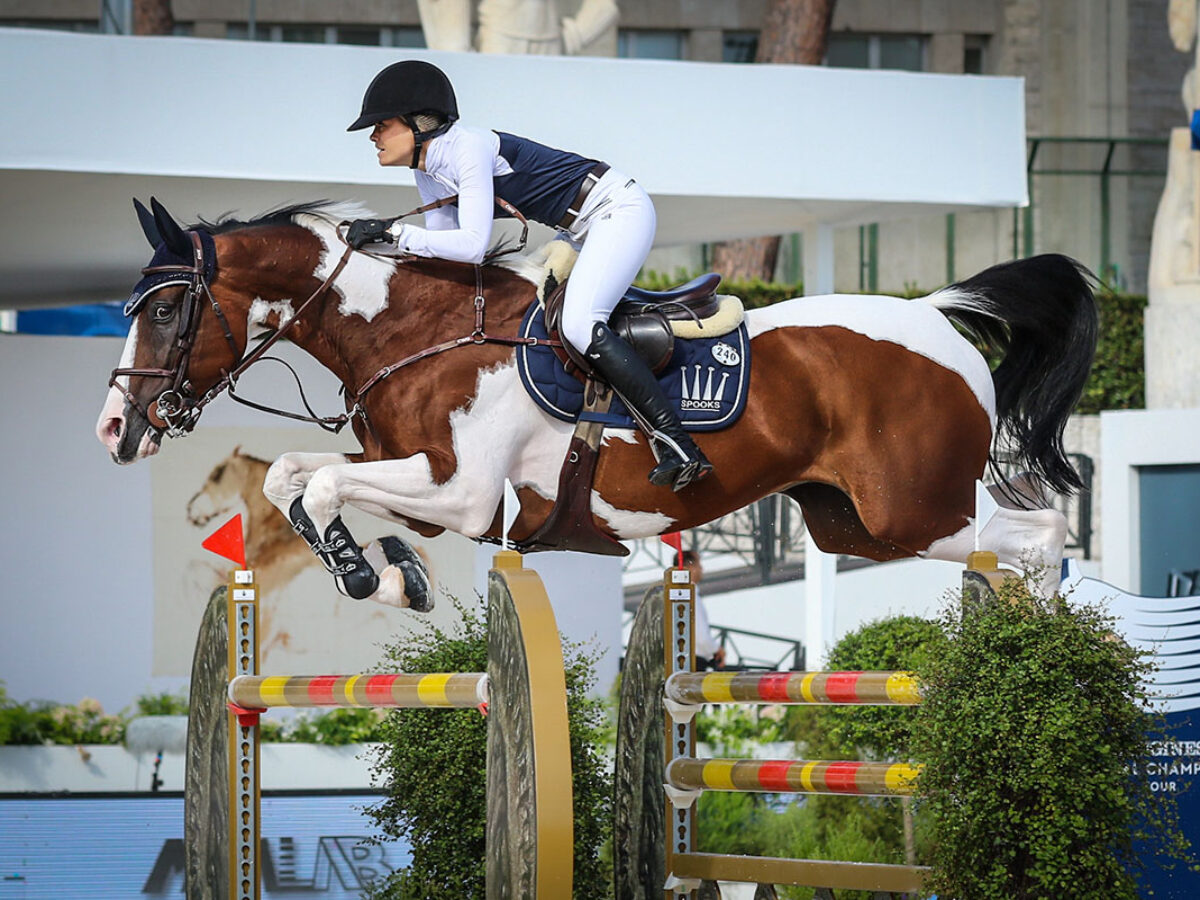 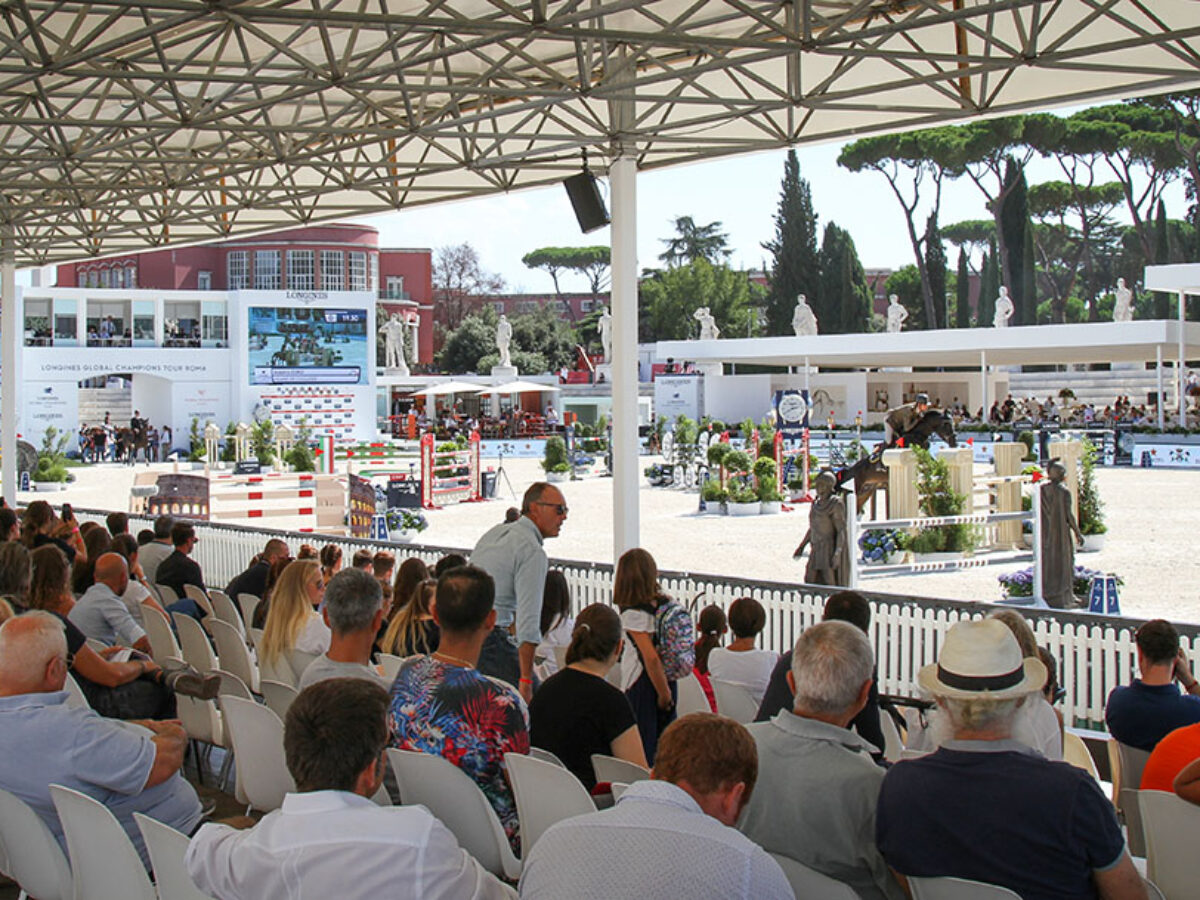 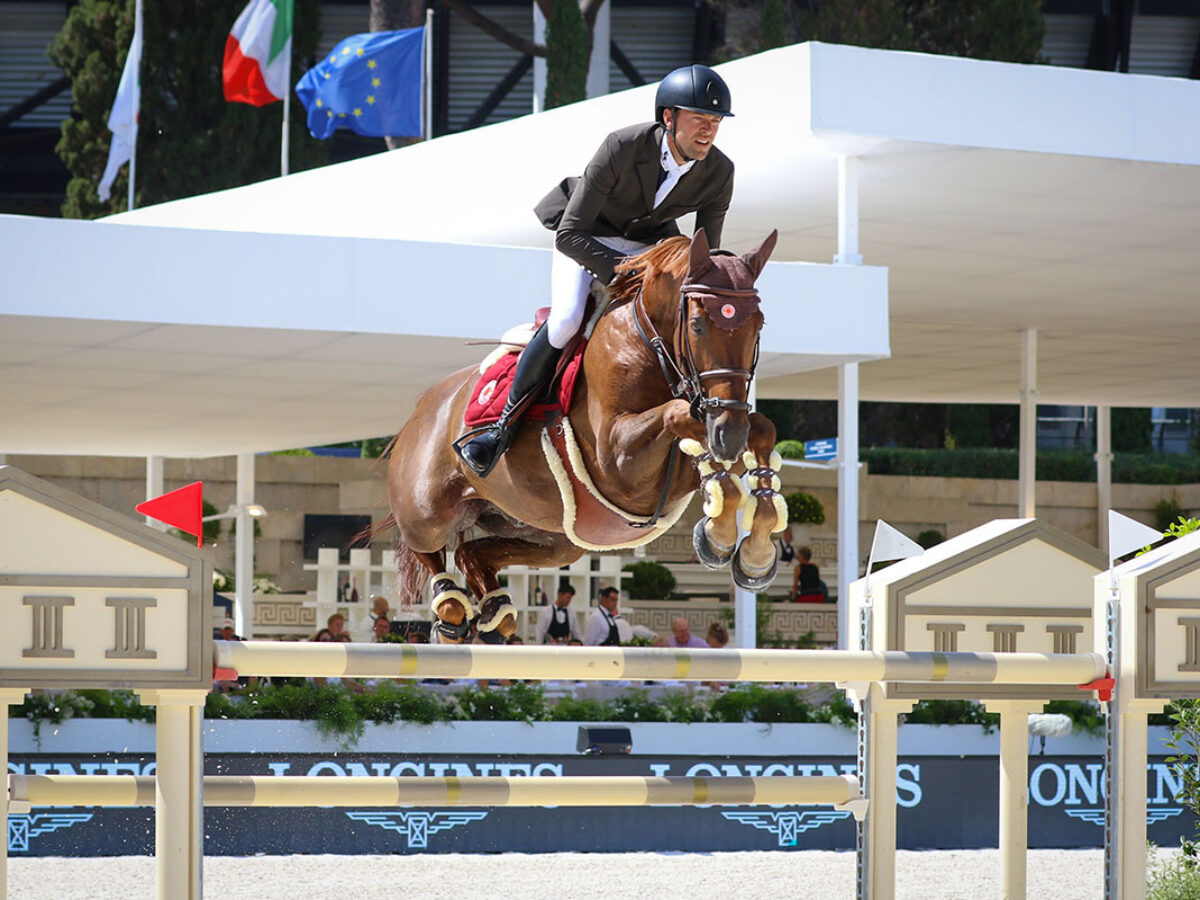 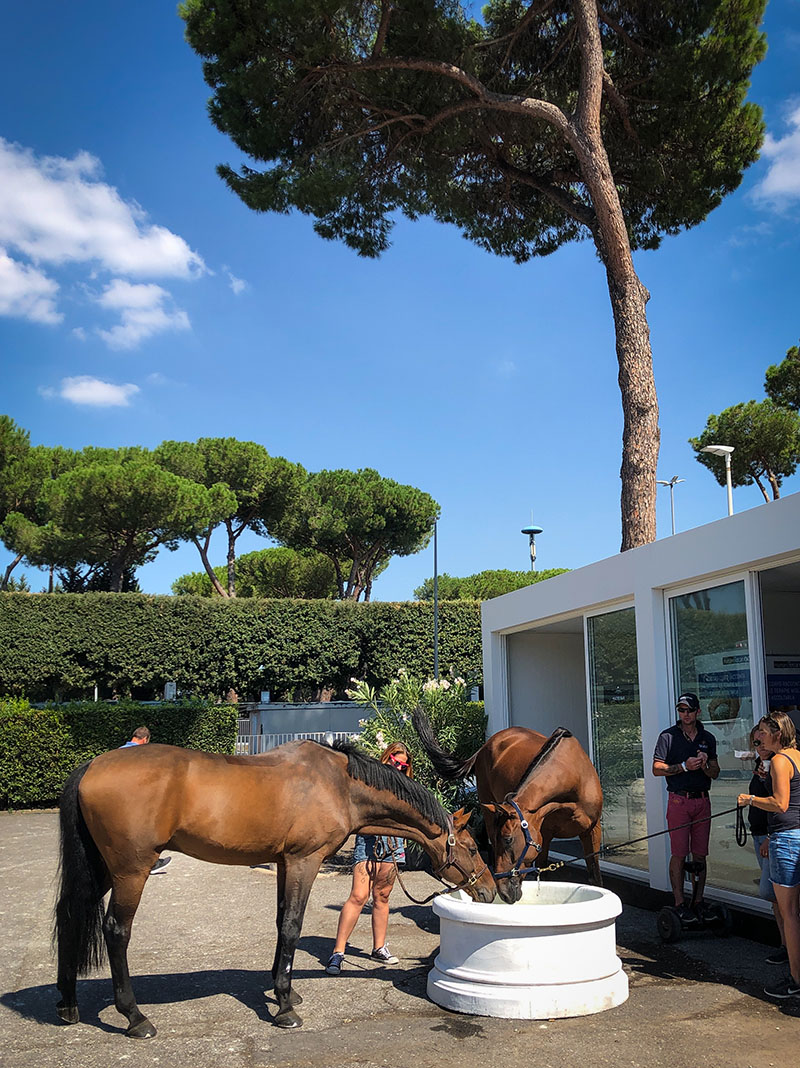 “The Roman theme was
put to abundant use with
many spectacular jumps.”

The set dressers — or in this case the showjump course designers — did an equally amazing job with jumps that would be at home in a Broadway production. The Roman theme was put to abundant use with many spectacular jumps, such as a Colosseum jump, a Roman Forum jump, a Gladiator jump, a Pantheon jump, Roman Coins and, for any Roman Holiday movie fans, you would have recognised the “Bocca della Verita” (mouth of truth) jump, just spectacular.

The Rome event ran for four days from Thursday through Sunday and gave many showjumpers a chance to compete. As well as the CSI 5* there was CSI 2* and there were plenty of Australians flying the flag in Rome. Fantastic for the sport to see Amy Graham, Georgina Harvey and Julia Lynch as well as Edwina Tops-Alexander all competing at this incredible venue.

After four days of gorgeous weather and fabulous competition, the CSI 5* came down to a jump-off, which, to the local spectators’ delight, included two Italians — Luca Marziani and Roberto Turchetto against Ludger Beerbaum (Germany), Ben Maher (UK), Pieter Devos (Belgium) and Marlon Zanotelli (Brazil). The atmosphere was amazing and the crowd incredibly excited but it was not to be Italy’s day.

The incredible combination of Ben Maher and the brilliant Explosion W won (and went on to win the entire series including the Prague Playoffs). Such a privilege to see this horse in action and watch the sentimental lap of honour.

An Italian opera singer starts Time to Say Goodbye (Andrea Bocelli), the sky is pink, the sun is setting, the evening is warm, Ben and Explosion start to canter their laps of honour and the crowd is on its feet. It was a goosebump moment. La Dolce Vita!

Sadly, the Longines Global Champions Tour only had one event in Doha in March 2020 before the season was cancelled due to Covid19.  At this stage they hope the Season to restart in 2021 — we can’t wait for its return! Follow the tour at www.globalchampionstour.com/about EQ