When Katie Wetteland decided she wanted a mule as her next mount, she wasn’t sure what to expect. Well, Mjölnir The Longear has since proven to be great under saddle and is turning out to be a capable show jumper. Despite this, his status in the competition arena remains uncertain. 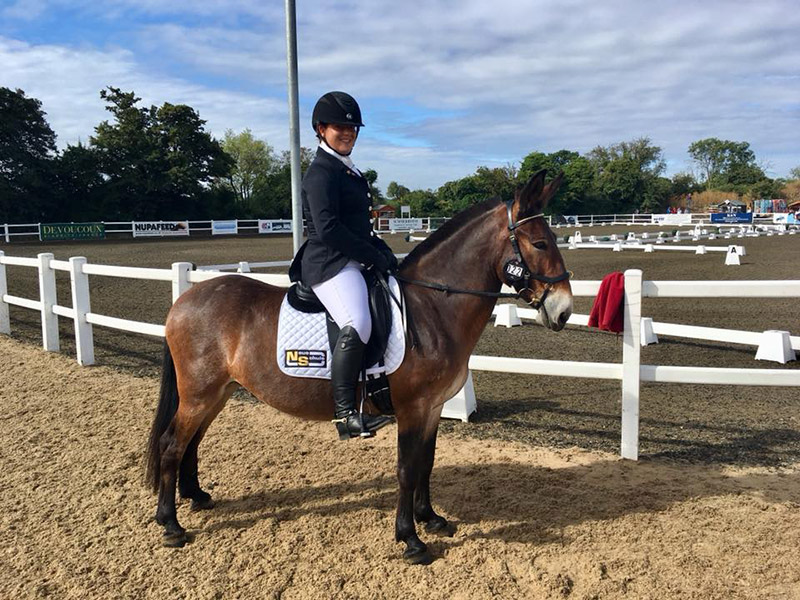 Wallace The Great, a pathfinder for dressage mules in the UK. © Christie McLean 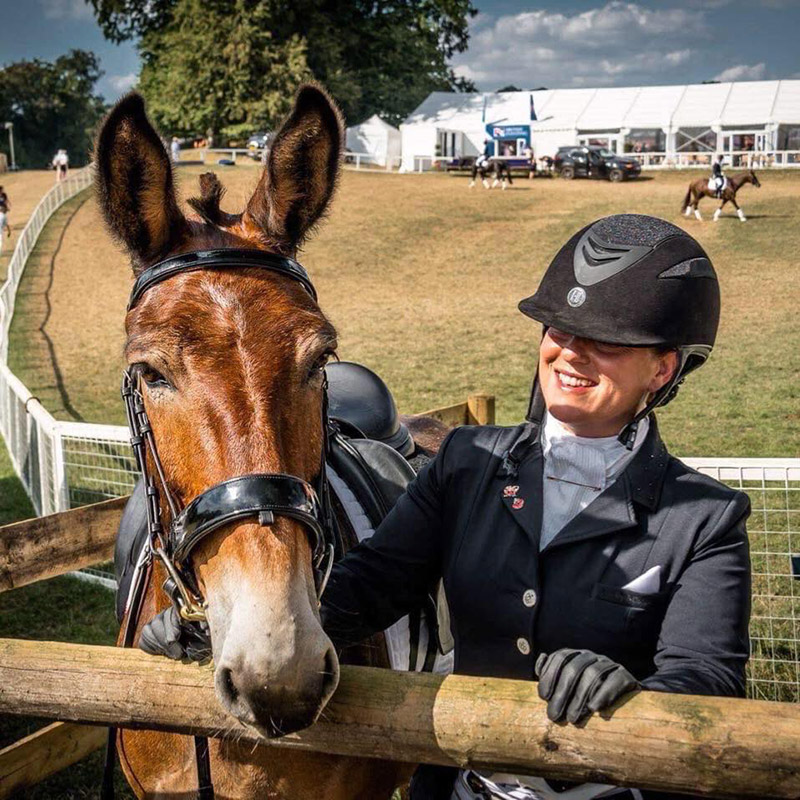 Wallace The Great and Christie at a competition in the UK. © Peter Mclean

The offspring of a male donkey and female horse, mules come in all shapes and sizes, often dictated by the breed of the mother. Throughout history, the humble mule has been valued for strength, endurance and general hardiness — they have not, however, been widely used in equestrian competitions.

However in recent years, a couple of mules have made headlines in the competition arena, largely due to varying rules that either allow or ban their presence. In 2018, UK-based dressage mule Wallace The Great, owned by The Donkey Sanctuary, made international headlines when his rider Christie McLean campaigned successfully for British Dressage to amend their rules and allow mules to compete. After the rules were changed, the pair competed in, and won, their first official British Dressage test.

In 2019, Christie launched a second campaign to prevent an FEI rule change that could have altogether banned mules from equestrian competitions on a global scale. Her campaign reached every corner of the globe and the petition gained nearly 22,000 signatures. It was ultimately successful, with the FEI leaving the wording of their rules as such that mules could compete at sanctioned equestrian events.

The United States Dressage Federation (USDF) have accepted mules in American competition arenas since 2004, although under some restrictions and specific rules. They have also long been permitted in driving and endurance events in the US. In 2014, 12-year-old performance-bred mule Heart B Dyna became the first of her kind to qualify and compete at the US Dressage Finals at Kentucky Horse Park; she competed in the Open Training Level Championship with rider Laura Hermanson. In 2016, a US Equestrian Federation (USEF) rule change was proposed that would have allowed mules to compete across all disciplines and classes; however, this proposal was unanimously turned down. Therefore, disciplines such as eventing and jumping do not allow mules to compete in national US events.

Click here to learn more about improving joint health and function in your horse.

Here in Australia, Equestrian Australia (EA) rules mirror the FEI, with EA General Regulations defining a horse as “a pony or other member of the genus Equus unless the context requires otherwise. A horse shall be born from a mare.” This wording implies that mules could compete. That being said, there are no mules currently registered with EA.

Katie Wetteland wasn’t always a mule enthusiast; in fact, for many years she competed her Dutch Warmblood on the US jumping circuit. However, during her time at Virginia Military Institute she was introduced to a mule… and fell in love. Five years on, and as her Warmblood neared retirement, she toyed with the idea of her next “horse” being a mule.

From her research, Katie found that mules have many interesting and desirable traits. “I wanted a mule for their unique bond with a single person. Mules who trust one person will put their lives on the line for them; if they don’t trust you they won’t even move forward. That kind of dynamic love was very fascinating,” she explains.

“Mules who trust one
person will put their lives on
the line for them.” 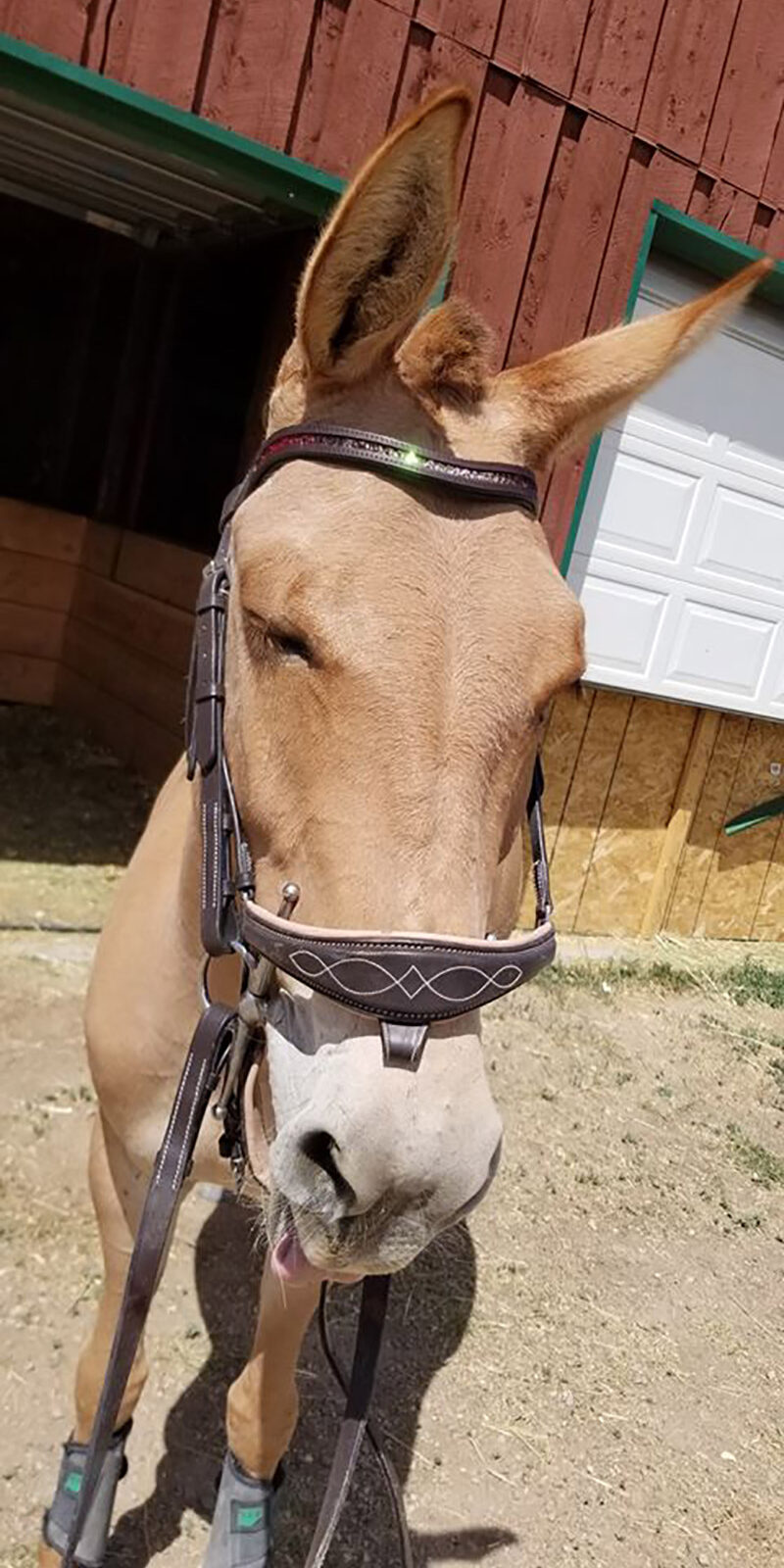 “He rode down the
lines like he’d been
doing it for years.”

A two-year-old mule caught Katie’s attention in a for sale advert; unnamed, unbroken and virtually unhandled, he was out of a race-bred Quarter Horse mare who had accidentally become pregnant to the stable’s resident jack. The six-hour drive to see the mule was worth it; although he’d had little done with him for the first two years of his life, Katie thought he had potential.

“He was barely halter broke when I purchased him. But I saw a look in his eye that I’ve seen in my competition horse and other competition horses; that look of extreme drive and intelligence, like he wanted to do something with his life. He was locked away in a concrete stall with one window for two years before I found him at the racetrack.”

So the mule came home, and Katie named him Mjölnir The Longear, after Thor’s hammer and as a nod to her Norwegian heritage. She explains that Norwegian’s pronounce it “MYOHL-neer” — and when spoken by Americans, it’s pronounced “mule near”.

Katie undertook all of Mjölnir’s early training herself and found him easy to back. Over the past couple of years, she’s brought him on slowly and found him great to work with.

“His personality is dynamic and purely based off who or what he is interacting with. With me he is soft, happy, comes when called, and is protective, possessive, and trusting. With men (alone) he is cold, will run away in the pasture, is defensive, and can be standoffish. I worked very hard at the trusting relationship we have and it comes through when he interacts with people he doesn’t know, or people he doesn’t like. He is much more trusting off the bat with women and he certainly knows the difference, but he has never been aggressive.”

Katie explains that when comparing Mjölnir with her Warmblood, there are similarities and differences. “He has the same amount of heart and drive for his job that my pre-trained and heavily competed Warmblood does… maybe even more!

“Out on trails he is extremely attentive to his surroundings, and protective of me in the saddle. I can ask him to go anywhere (even if he’s unsure) and I can almost feel him asking if he’s going to be okay if he does what I ask. Nine times out of 10, he goes for it. Not bad for a year under saddle!”

A show jumper at heart, Katie was curious to see whether Mjölnir had any interest in the discipline — a couple of free jumping sessions later, and she began to realise that the mule could jump! Now just over four years old and standing at 14.3 hands, he’s proving to have a talent for the discipline — although again he hasn’t done a lot due to his age.

“The jumping was secondary. I have competed heavily here in the US up to 1.15m with my previous horse. I thought ‘Mjölnir has the breeding to be forward. Why not make him a jumper?’ He’s never refused a jump, even when first starting out. He charges down lines. He loves having a purpose!”

However, Katie’s excitement at unearthing Mjölnir’s jumping ability was soon replaced with dismay when she discovered that unlike in the US dressage arena, mules were not as welcome on the showjumping circuit. 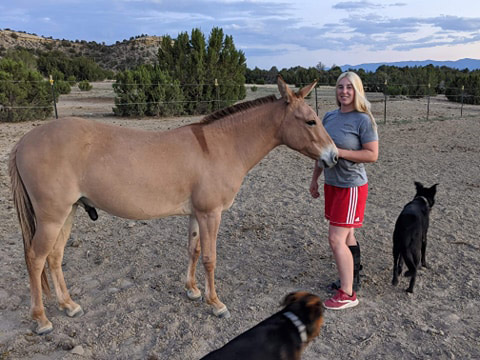 Mjölnir at home with Katie and her dogs. © Kate Wetteland 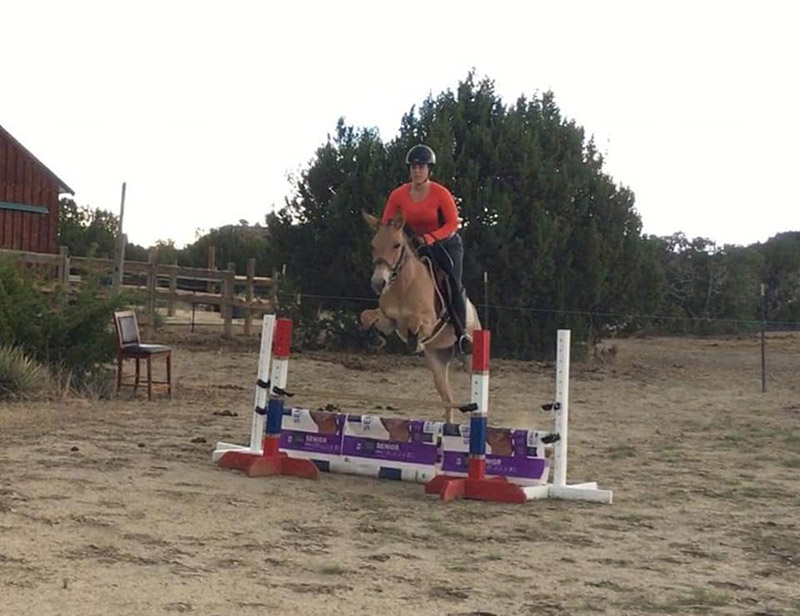 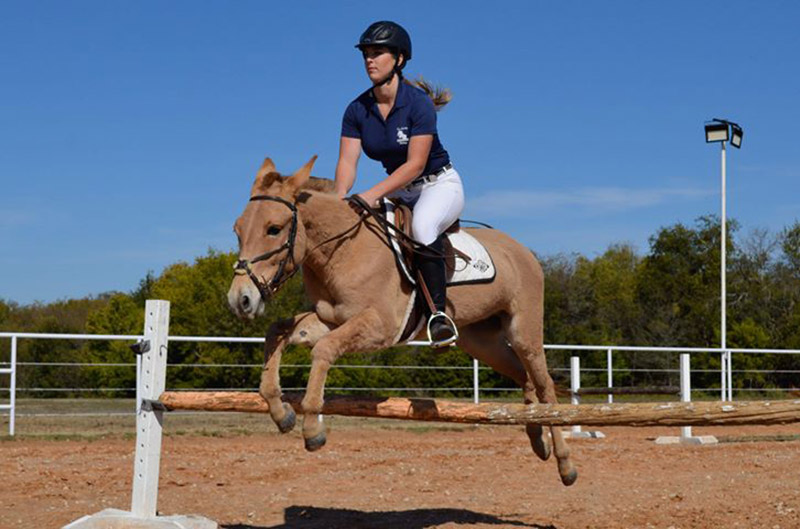 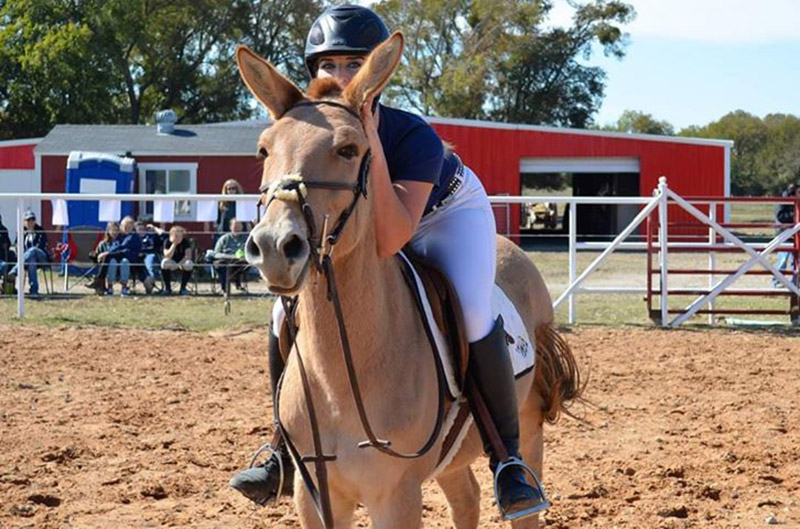 A – In action at the local jumping competition! B – No horses were frightened while they were out and about! © Kate Wetteland

“I’ve taken my mule to a show
to prove them wrong.”

She has since made it her mission to campaign for mule equality with the United States Hunter Jumper Association (USHJA), an affiliate of USEF. Drawing inspiration from the way that USDF allows mules to compete, Katie is hoping that USHJA will admit mules in sanctioned competition at lower levels and with a specified set of rules.

In addition to starting a Change.org petition, Katie is also working on evidence to support her conviction that mules can and should be allowed to compete with horses. Therefore, she has made a point to take Mjölnir to a local, non-sanctioned event to prove mules’ capabilities.

“I begged and pleaded to enter one local show back in Texas for the sake of my petition. I wouldn’t have been competing at all at his age, if not for the fact I knew that the USHJA wouldn’t accept me telling someone else’s story; I had to experience it for myself and tell my story,” explains Katie.

“I didn’t have a trailer so I rode him for an hour to the showgrounds from his field at home. He got a stall at the very back of the barn to settle in while I walked the courses. No one saw me ride in on a mule. When I brought him out to warm up, everyone was talking! Photos, stares… you name it, it was happening. He warmed up beautifully alongside three horses in my two-foot class.”

Being young, Mjölnir had done limited jumping at home. In fact, Katie says he had never jumped more than a single before at the time — so the idea of a course was very new to him. “He didn’t even bat an eye. He rode down the lines like he’d been doing it for years, and stood quieter than the horses did while he waited his turn. He ended up getting second in his class out of the four of us.

“A man came up while I was mounted and waiting to go, and said, ‘My wife and I are arguing… that’s not a mule is it?’ I laughed and said that he is, and he said to his wife, ‘Told you!’ He’d never seen a mule jump before and was so excited to watch! I learned later that his daughter was in the class before me.” 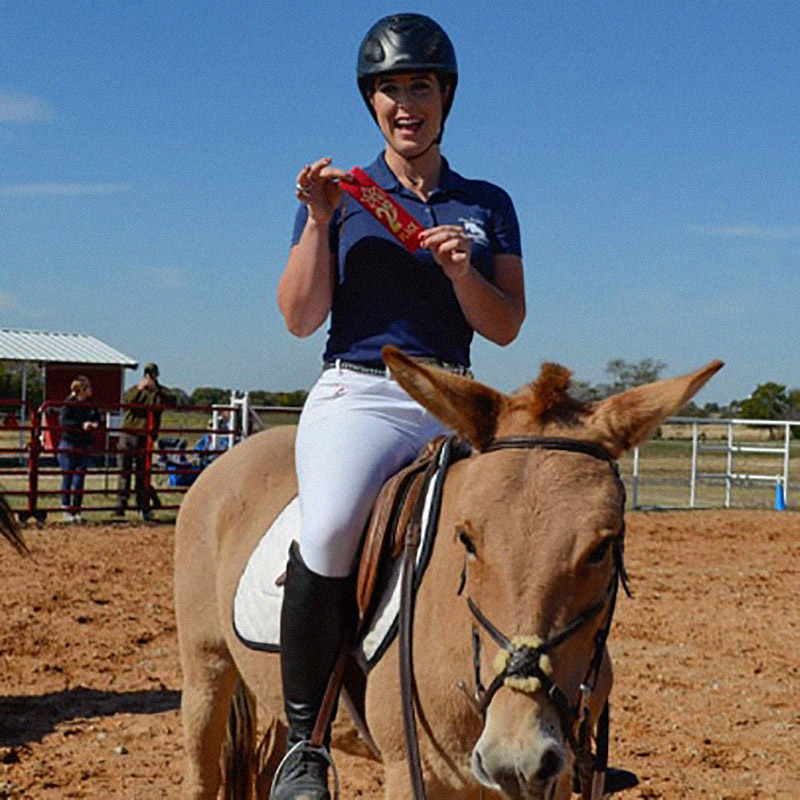 One of the main concerns people appear to have with mules competing is the fact that they may frighten some horses. Katie is aware of this, and although she hasn’t yet come across horses or ponies that are terrified of Mjölnir, she has taken this into consideration with her petition. She suggests mule owners would need to call ahead to the showground before entering an event, to respectfully ask permission to compete, and would “offer to keep their mules by the trailers or in the parking lot, so as to not potentially scare any horses”.

Katie is under no illusion when it comes to rule changes; she knows that altering the USHJA rules will be a challenge. “The USHJA has been very resistant to change in the past when mule rules have been presented. So far my experience has been no different, except for the fact I am handling it differently. When they resist, I respond with education; when they say people won’t support the change, I start a petition; when they say horses will be scared of mules, I take my mule to a show to prove them wrong. It’s about changing how the elite organisations that run these programs think about mules. If we can change how they think about them, we can change the rule.” EQ

Katie is currently halfway to her goal of 5,000 petition signatures. If you would like to support Katie in her campaign, you can sign the petition here.