WITH AMANDA ROSS
content placeholder
A horse with 'hives', also know as urticaria.
Previous
Next

Commonly known as hives in humans, urticaria is a skin condition that could more aptly be described as a reaction to an allergen or offending agent. Identifying what causes it requires some detective work. 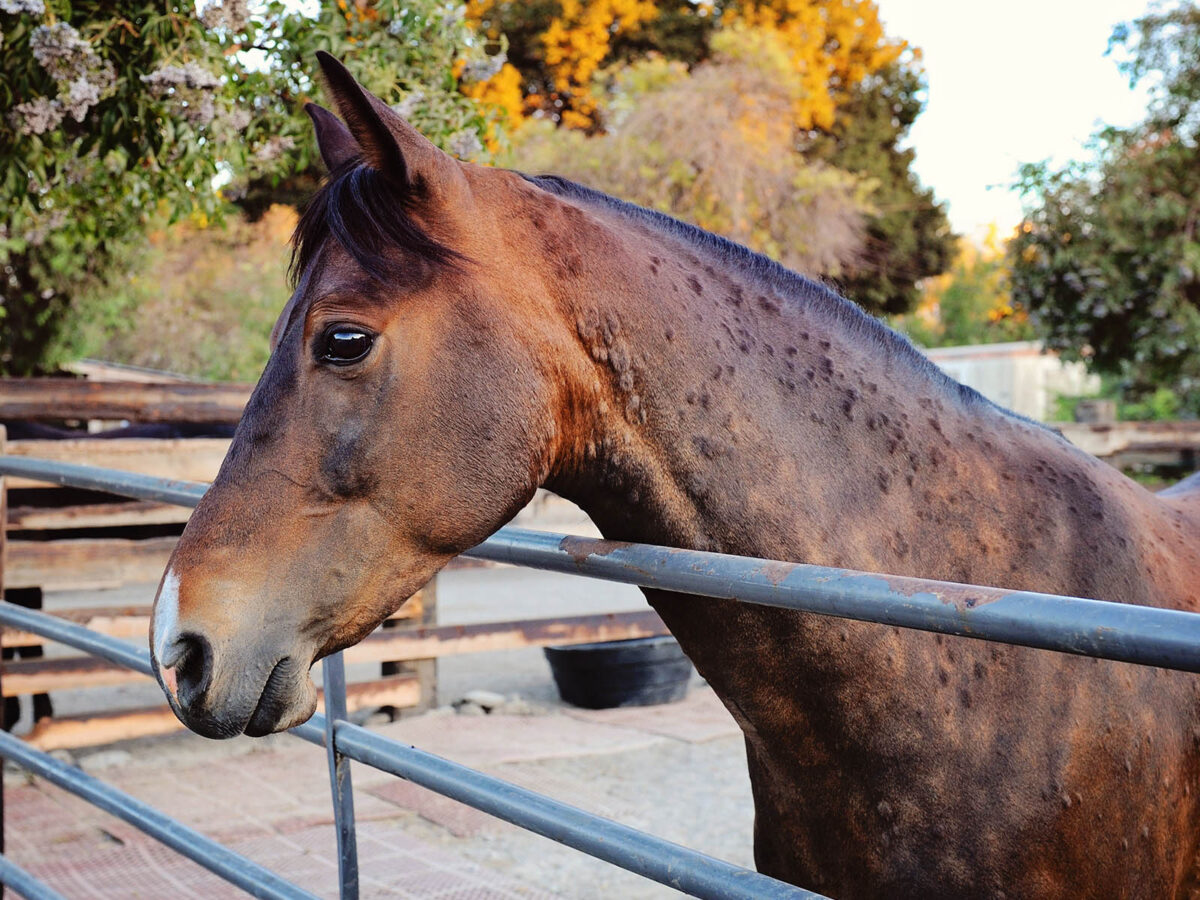 A horse with 'hives', also know as urticaria.
Click here to discover what makes ELD arenas the obvious and best choice

“The triggering factor for
urticaria can come from a
multitude of sources.”

The triggering factor for urticaria can come from a multitude of sources, including insect bites, chemicals, food products, contact allergens or medications applied, ingested, or injected. Often the offending agent is never identified, with the horse recovering and the skin condition never occurring again.

In a small minority of horses, the offending agent remains in the surrounding environment or in the diet and the horse continues to get episodes of, or does not recover from, urticaria, despite appropriate therapy. It can affect horses of any age, sex or breed.

The condition arises from hypersensitivity, intolerance or an allergy to an offending agent, or it can be brought on by other physical factors such as pressure, heat, cold or exercise. Once triggered, a cascade of cellular events follows, resulting in the release of inflammatory mediators (the more commonly known one being histamine) from cells. These mediators act on small blood vessels and capillaries, allowing fluid to leak out into the dermis (underlying skin layer), causing oedema (fluid filling) and the formation of plaques and small lumps. The overlying skin, the epidermis, is usually not affected so there is no injury to the visible skin or hair loss. The reaction usually occurs quickly but can take days to weeks to resolve if left untreated.

Clinically, urticaria is seen as oedematous swellings or wheals that can either be localised to one region of the horse or generalised, affecting the entire body of the horse. The oedema is what is known as “pitting oedema”, meaning there will be an indentation produced when finger pressure is applied to the areas. It can occur in varying degrees of severity and the reaction can occur quite quickly. I have known of several occasions where the horse was “normal” but when seen 15 minutes later is swollen up and almost unrecognisable. Sometimes, the horse is found with several small nodules, which do not appear to worry the horse and if left untreated often resolve on their own. Owners will often refer to these skin changes as heat lumps or protein bumps.

In some circumstances the horse can become itchy, however, in most cases the lumps do not appear to worry the horse. For those cases where the horse becomes pruritic or itchy, the initial skin picture and diagnosis can become complicated by self-mutilation — where the horse bites or rubs itself and causes large wounds to the skin.

In extreme cases where there is severe generalised swelling, the horse can show signs of difficulty breathing because of the oedema in their nasal passages. If this occurs, treatment should be sought quickly.

As mentioned above, there are many agents that can trigger urticaria and trying to identify the primary offender can be complicated. A thorough history regarding the horse and its environment is key to helping solve the puzzle, but even then, with the best of histories available, an answer is not always obtained. During the warmer months, insect bites are a common cause of urticaria and assessing the environment for biting flies, ants, spiders and mosquitos is warranted. Many drugs, regardless of how they are administered, can cause the reaction, so a close look at recent administration of antibiotics, vaccinations, vitamins, anti-inflammatory medications, or worm pastes should occur. A history of moving into a new paddock that contains different grasses or weeds, or a change in stable bedding, may offer clues, as does a history of purchasing and using new rugs or gear. Other things to look for include the diet and any other supplements used, and any changes to these in the preceding months. 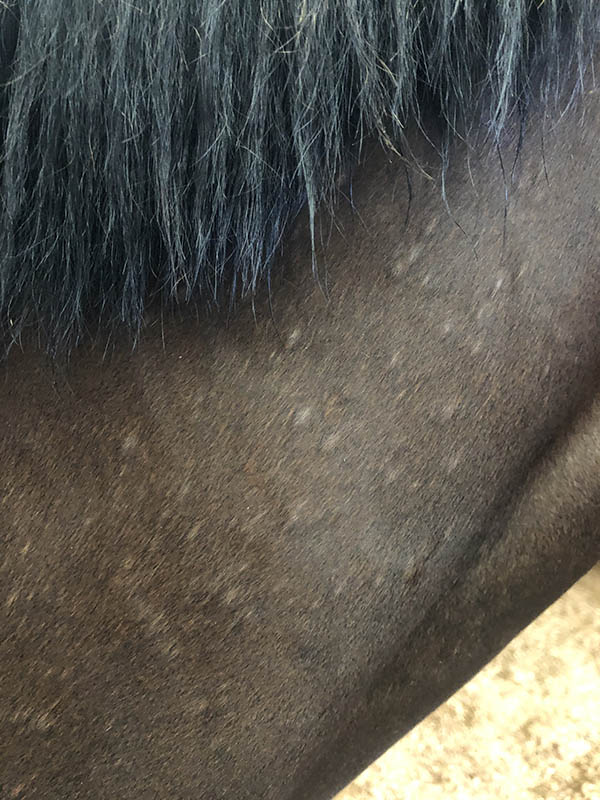 This horse had a reaction to an antibiotic paste.

For horses where urticaria recurs frequently or just does not resolve completely, it is possible to do more in-depth diagnostic procedures to help identify a source that is contributing to the problem, however, the success of these tests is variable. 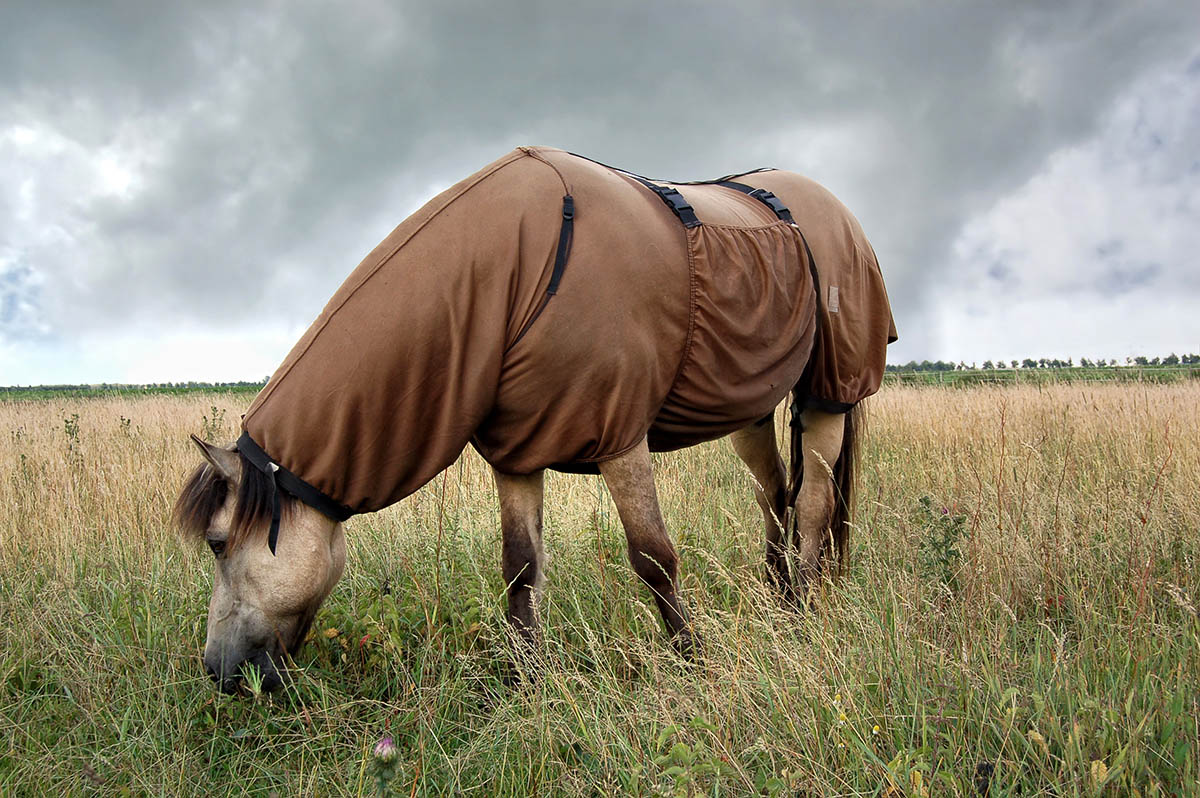 Where insects are the cause, protective rugs or netting around stables areas may be necessary. 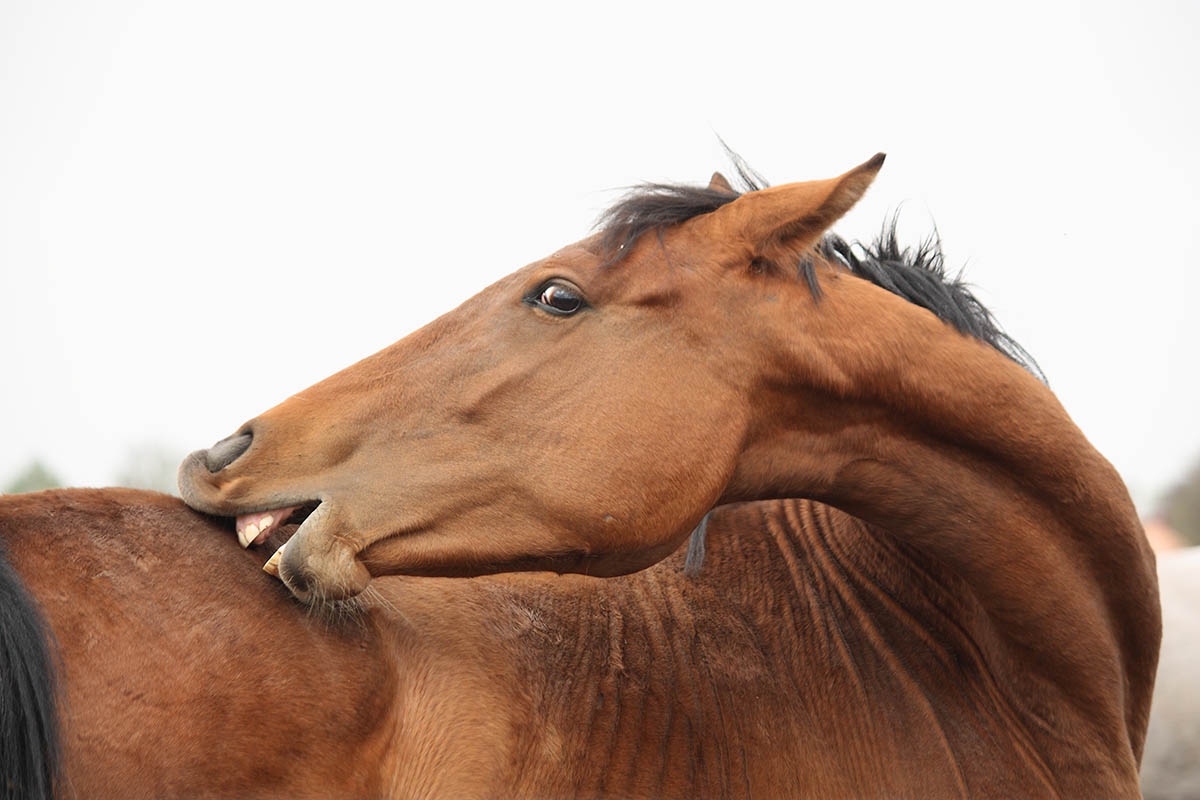 Horses with urticaria are often quite itchy.

“Immunotherapy has been
used to treat horses with
chronic or recurrent urticaria.”

Treatment for urticaria should be focused on eliminating the causative agent from the horse’s environment and avoiding or minimising the risk of future exposure. The use of corticosteroids and antihistamines can help to relieve the symptoms and are often used when the horse first presents to the vet with urticaria. In those cases where there are a few lumps localised to a small area, no treatment is required as the condition is self-limiting. It is often beneficial to wash the horse with a mild hypoallergenic soap/medicated shampoo when the urticaria is first discovered because the allergen can remain on the horse’s coat for some time if nothing is done.

If insect bites are the initiating cause, then topical or pour-on insecticides can be applied to the horse on a regular basis. This can be difficult for horses that are regularly shampooed and washed as the insecticide becomes diluted and ineffective, requiring frequent reapplication. Care must also be taken that the horse’s skin does not react to these products as it is of no benefit if the cure creates a similar skin reaction as the initial allergen. Insect-proofing stables, for example using flywire to cover the open areas where the insects can gain access to the barn, can be effective. These flywire screens and netting can also be sprayed with insecticides to help reduce the bugs in the environment. Light rugs can provide some protection when the horse is outdoors. It may be necessary to stable the horse during the periods when insect numbers are at their highest.

Reactions due to drug administration can be eliminated by not using the medication, however, care should be given to use of related compounds as these can often trigger the same response, even though the chemical listed on the bottle or package is slightly different. For instance, a horse that has urticaria because of a trimethoprim/sulphonamide antibiotic will often then react again, regardless of the type of sulphonamide drug or the method of administration (injection versus oral).

Foods that have triggered urticaria should not be fed to the horse again, even in small amounts.

Immunotherapy has been used to treat horses with chronic or recurrent urticaria caused by an allergen that cannot be eliminated from the environment. This is a treatment aimed at desensitising (hyposensitising) the horse to an allergen, so the body does not react, or mildly reacts when challenged. It involves creating a form of the allergen that can be injected into the horse frequently and over a very extended period (up to a year), to desensitise the horse’s immune system to that allergen. It usually requires a booster given every year to maintain the desensitisation. EQ

The principles of rehabilitation (By Dr Maxine Brain – June 2020 Issue)