WITH AMANDA ROSS
content placeholder
Subzero and Graham Salisbury at the MCG. © Racing Victoria
Previous
Next

Australian racing legend Subzero passed away at the end of August aged 32, just two months after the passing of his dedicated owner, Graham Salisbury. The pair’s relationship spanned more than 25 years and they shared a bond forged through complete trust. 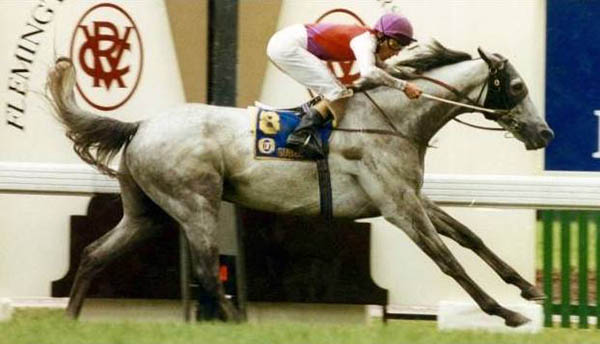 “It wasn’t long before
he was standing at the
bar for photos!”

Two years ago when Subbie celebrated his milestone 30th birthday, Equestrian Life caught up with Graham Salisbury to find out more about his partnership with the lovable grey. Here we share a snapshot of that interview that explains how the iconic duo came about…

IT STARTED ON THE TRACK

Graham, a former Clerk of the Course at Flemington, explained that Subbie’s potential was evident before he had even won a race. It was his beautiful head and big, intelligent eyes that caught Graham’s attention. Approaching trainer Lee Freedman, he asked whether he could buy him when he retired for use as a Clerk of the Course mount. The story goes that Lee agreed to part with him for the sum of $1, but asked Graham to let him at least win a race first! Subbie went on to win six, three of which were Group 1s. One was the Melbourne Cup.

When he powered down the outside of the Flemington straight through driving rain to win the Cup in 1992, Graham feared the win would make it hard to inherit the horse — especially for the agreed price. His fear was unfounded; once the curtain closed on Subbie’s racing career, Lee stayed true to his word, and over the years that followed a national treasure would emerge that transcended any results on the track.

Subbie’s retraining began, but not without a few mishaps! Graham explained that a regular horse float took some getting used to as Subzero was accustomed to big, airy horse trucks. Early on during a practice run around the grounds of Flemington, Graham was stopped by the late Roy Higgins, who asked whether he was going to the zoo. It turned out that Subbie had broken through the top of the float and was sticking his head out like a giraffe! Subbie remained calm while he was rescued with barely a scratch on him. Over the years, keeping a cool head in unusual situations ended up being one of Subbie’s greatest attributes.

Teaching a fidgety Subbie to stand still was another important lesson early on.  Graham thought some time at the beach might help, so he began taking him for regular trips to Altona. The tactic helped, and Subbie began to learn to stand still in the waves — until one calm day when he decided to start swimming. Graham recalled thinking he was going to end up in Tasmania as he tried to turn Subbie around, but the horse kept swimming until he reached a shallow sandbar. He then took the opportunity to get down and have roll in the shallow water! By this time, an audience had gathered on the beach, including media. Fortunately, once Subbie had his fun, they made it safely back to shore. Throughout his life, Subbie always loved water and had a dam in his paddock for summer swimming.

With some early training hiccups out of the way, it wasn’t long before Subbie started work as a Clerk of the Course horse — a role that he became famous for. Over the years, Subbie led in 15 Cup winners and his resumé extended beyond calming down nervous gallopers and chaperoning winners; he’s given advice as well. He reportedly gave 2001 winner Ethereal a pep talk pre-race, prompting Jockey Scott Seamer to give him a thank-you pat on the way back to the winner’s circle. 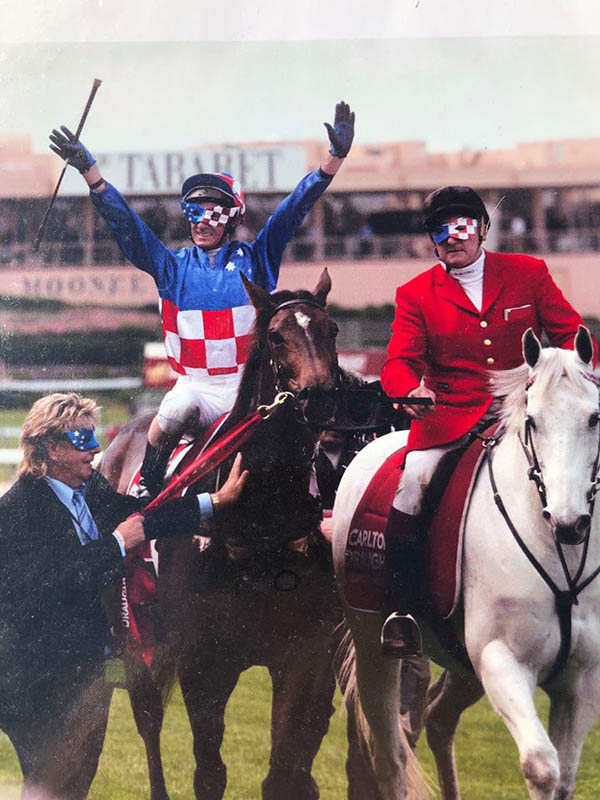 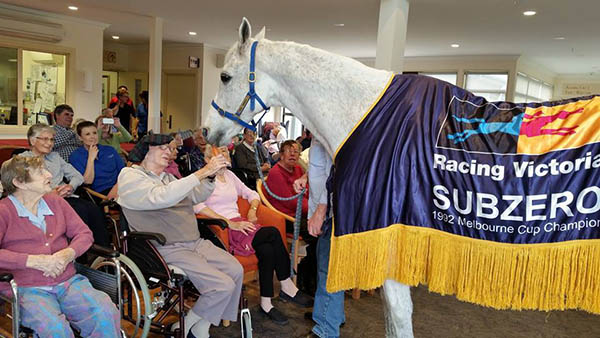 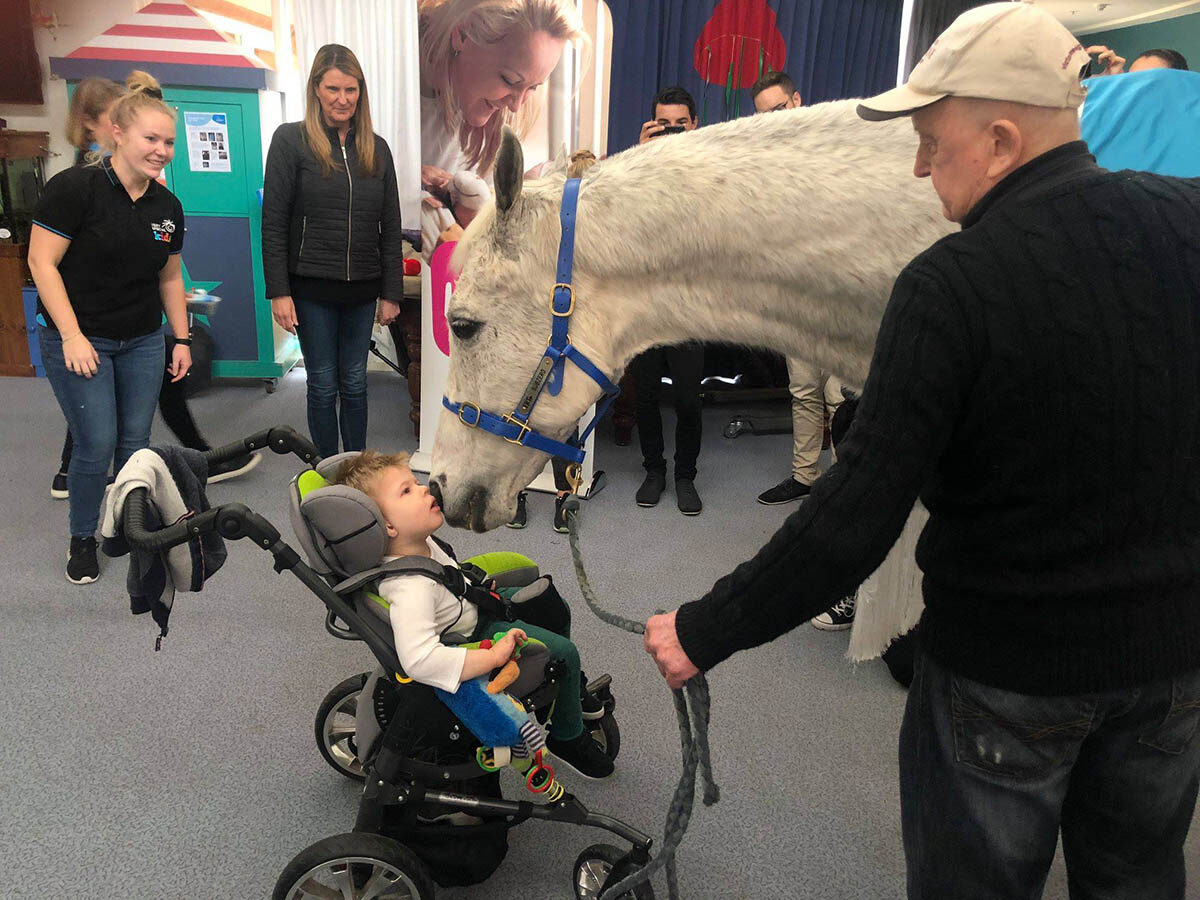 Subbie having a word with a young patient. © Subzero Facebook page 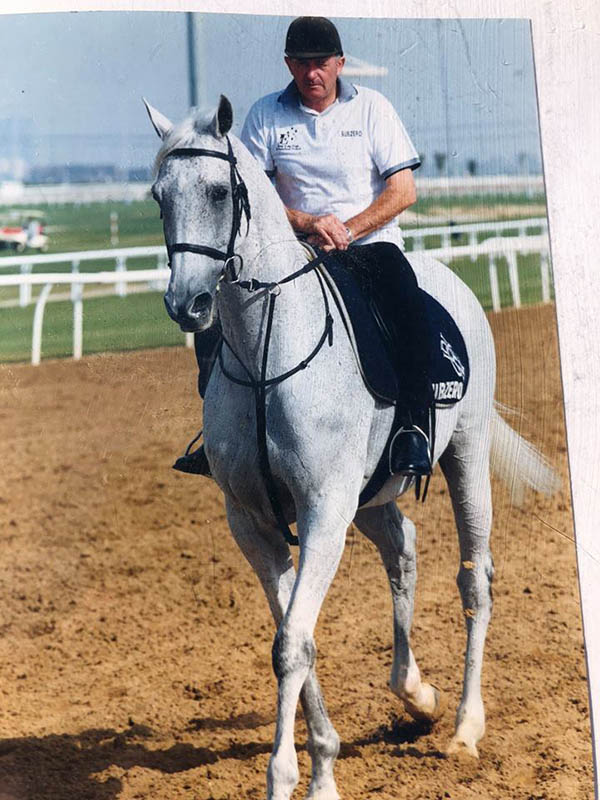 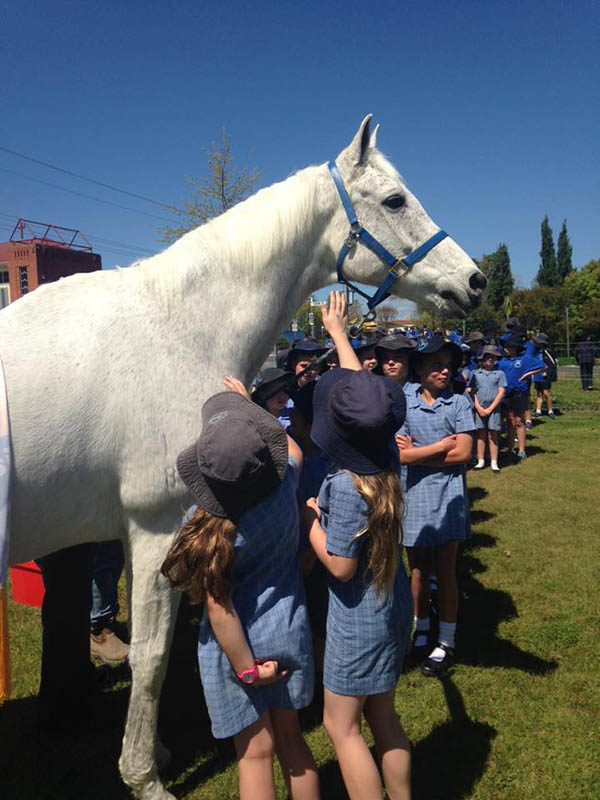 “Subbie had broken through
the top of the float and was
sticking his head out
like a giraffe!”

Most of us have seen photos of a relaxed Subbie visiting children in hospital or attending bustling public events. The catalyst for “indoor work” came about through Lee, who had bought a bar in the city and wanted Subbie to attend the opening. After some thought, Graham agreed to take Subbie along — but he certainly wasn’t forcing him to go inside, as he didn’t want to risk breaking the trust they had. However, Subbie was no ordinary horse; a little hesitant at first, he quickly made up his mind that heading inside wasn’t a bad idea and it wasn’t long before he was standing at the bar for photos! Speaking in 2018, Graham explained that Subbie would follow him anywhere, and over the years they visited hotels, casinos, and clubs — as well as hospitals, nursing homes and schools. “He’d walk through fire with me, that horse,” said Graham.

Well-travelled, Subbie has been all around the country and even overseas. A trip to Dubai for the World Cup saw Graham fielding offers from two Arab sheiks who were impressed with the charismatic grey. However, not even a Mercedes or $100,000 could convince Graham to part with his beloved friend.

Particularly over the past decade as Subbie’s Clerk of the Course work wound down, he and Graham visited nursing homes, charities and hospitals, bringing joy to many. Graham always felt that in nursing homes and hospitals, Subbie had a “sixth sense” as he would always go straight to those who were really sick and in need of cheering up.

Approaching 30, Subbie’s workload had eased but he hadn’t hung up his horseshoes altogether — keeping active was partly how he defied his years. That, and first class care from Graham; even in his twilight years, the horse still had a full set of teeth! As well as Graham’s dedicated attention, the team at Bendigo Equine Hospital were long-term supporters, offering the horse complimentary care.

In his final years, Subbie still enjoyed the odd trip out and about, and the rest of the time he spent in his three-acre paddock on a property in Heathcote with Graham and his wife, Anita, and their daughter, Nicky. He would greet Graham every morning with a nicker, and once breakfast was over, Graham would sit with him for half an hour for a chat — just as great mates do. 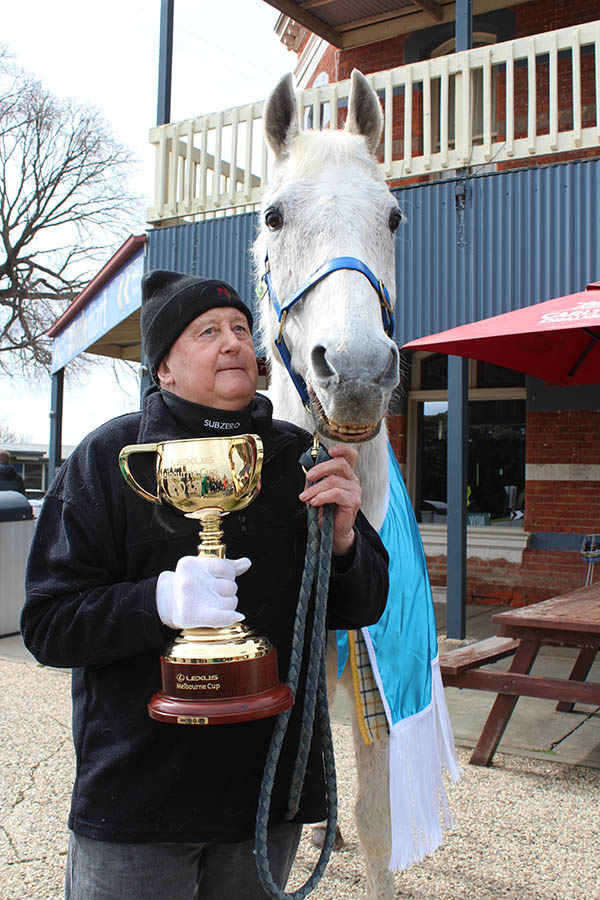 Subbie and Graham, pictured here in Nagambie for the the Lexus Melbourne Cup Tour visit, were the greatest of mates. © Victoria Racing Club

Many people remember Subbie’s racing days and have fond memories of him winning the Cup on that wet and wild Tuesday in November, or of leading Cup winners back to scale. When Graham had his right arm tattooed with the horse’s name, the tattooist did it for free; he had backed Subzero when he won the Cup and felt the fee had already been paid.

Just as many fans recognised Subbie and Graham for their work away from the track, where they spent countless hours bringing smiles to faces and lifting spirits. Graham set out to make Subzero the people’s horse, and he undoubtedly achieved that and more. Bruce Clarke, a prominent racing personality and long-time friend of Graham and Subbie’s, said it perfectly during our interview in 2018: “There’ll be other horses that can do things like Subbie, but none that will do these things as well as him.”

Subbie was a lot of things to a lot of people, but for Graham he was simply “a great mate”. Graham sadly passed away exactly 10 weeks before Subbie after a long battle with cancer, aged 76. The team at Bendigo Equine Hospital made the difficult decision in consultation with Graham’s family to euthanise Subbie on 29 August due to heart failure. Both passed at 2.38pm on a Saturday. The world has undoubtedly been left a better place thanks to their iconic partnership, and horse owners the world over can certainly learn from the incredible trust and mateship they shared. EQ

The carrot or the liquorice? Positive reinforcement (By Dr Kerry Mack)