Emma Flavelle-Watts has rubbed shoulders with top riders and horses in Europe. Now back home in Queensland, she is turning heads with an opinionated mare by the name of Cabaret C (aka Emma). 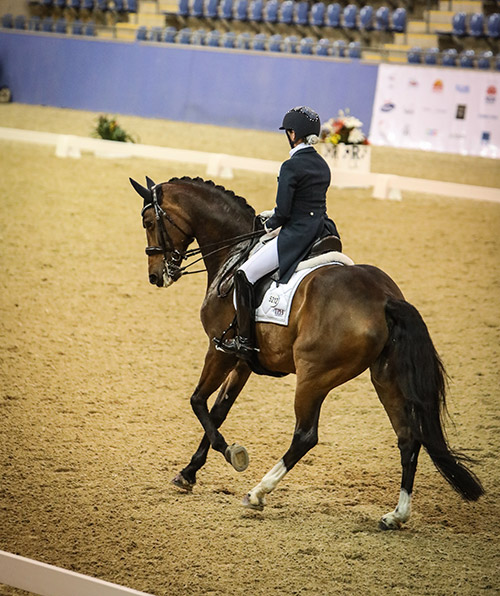 “How lucky was I that Linda
(Schmerglatt) lived such a short
distance from my home!’

Queensland dressage rider Emma Flavelle-Watts was a self-starter from the outset. In the very beginning, her riding career was her idea and, although she had the unwavering support of her non-horsey parents, there were certainly no flash ponies on offer in the early days!

“As with most kids back in the day, I started with a few less-than-ideal horses in Pony Club,” says Emma. “Being a mum myself now, I cringe at the thought of allowing my children to sit on anything that even would slightly resemble what I had… but my parents knew no better and I’m still alive and no doubt a better rider for it!

“My mum dedicated her life to driving me around the country competing at Pony Club events every weekend. She had no horse handling experience, so I learned to do it all myself. I couldn’t have asked for a better start to my riding career and I’m forever grateful.”

It wasn’t until Emma turned 16 that her passion began to develop for dressage.  “Dressage led me down the road (literally) to Linda Schmerglatt (the revered dressage rider and trainer with an international reputation as a “correct seat” specialist, based at her Cades Equestrian Centre on the Sunshine Coast).

“How lucky was I that Linda lived such a short distance from my home! I lived and breathed dressage for several years at her stable, before being given the opportunity to go overseas. Linda really instilled in me the importance of the basics and the rider’s position and influence on the horse. Of course, there are many people who have influenced me in my riding career, and my time overseas learning from different riders and experiencing the shows and different stables has given me a solid direction and path to follow.”

Emma says that her time spent in Germany riding many different horses also helped to shape the rider she is today. “Whilst in Germany, which seems like a lifetime ago now, I rode at several different stables under the eye of Nathalie zu Sayn-Wittgenstein, Hans Heinrich Meyer zu Strohen, Jörn Kubelke and Jens Kühl.

“I was lucky enough to compete quite a bit on young horses, which was an incredible experience. My most vivid memory was being allowed to ride Poetin and Kaiserdom, who were both Bundeschampionate (German National Championships) winners. I can still feel the feeling of both horses’ walk, trot and canter!” Poetin was described as ‘a horse that appears every 100 years’ when she was sold for a record 2.4 million euros in 2006.

Emma is now based as a professional dressage rider, trainer and coach at Noosa on the Sunshine Coast. “Since being back in Australia, I have married my high school sweetheart and have two beautiful children. I have always been quite self-motivated and disciplined and it came to a time in Europe when I just wanted to be back at home and start my own thing. I had a talented horse of my own that I could bring home and lots of support from family and friends.”

While Australia is definitely home for now, Emma is excited by the possibility of one day returning to Europe. “One day when the time is right, I will go back… this time with Will and the kids (they are always up for an adventure) and hopefully a talented horse or two! I do miss the whole horse world over there; it is totally encapsulating, inspiring and mostly motivating… except for the cold! 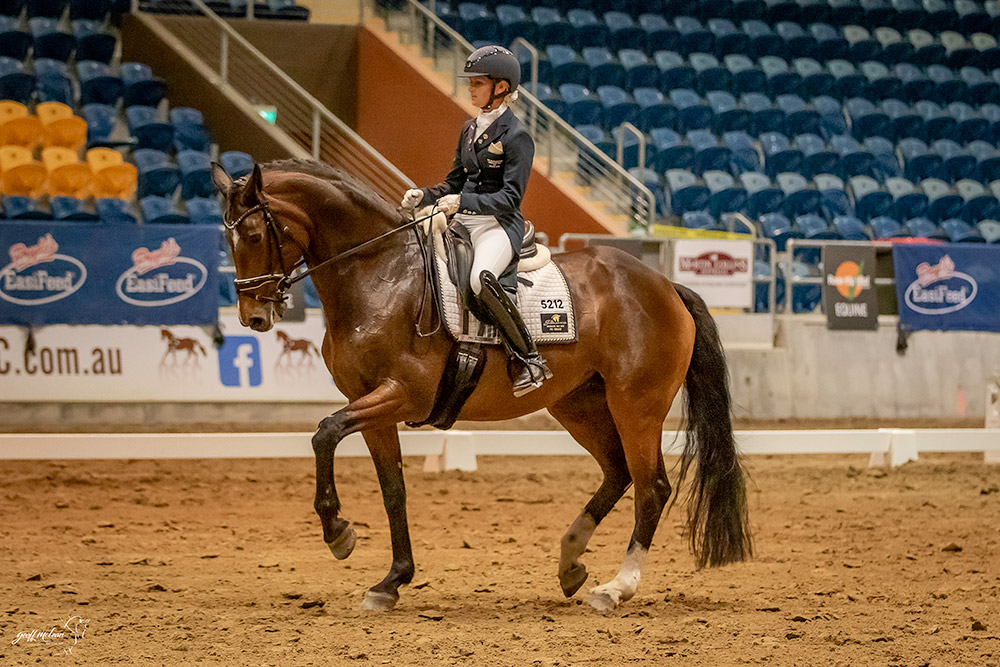 “She also cleared the arena
wall a few times whilst
learning flying changes!”

For Emma, the biggest difference she found when riding in Europe was the sheer size of the industry and level of professionalism. “I loved the knowledge, dedication and professionalism of those who surround you in daily life. That for me is the difference.”

Emma certainly rode some fancy horses during her time in Germany, however, these days she also has a very fancy horse to ride in Australia by the name of Cabaret C. “Cabaret C was purchased by Kim Tenkate as a four-year-old in 2012 from Hannes Bruning. She was bred in Denmark by jumping bred sire Canto, out of a Contender mare,” says Emma. When Kim imported Cabaret C, her registered name in Germany was actually Emma 196, and to this day her stable name remains ‘Emma’! Kim’s daughter, Caitlin Cullen, is listed as the mare’s official owner.

The 13-year-old Holsteiner mare can be a bit unpredictable in the competition arena, but as Emma explains, you will not meet a more gentle and sweet-natured mare and she simply loves people. “She is, however, the alpha mare and likes to be surrounded by her herd. She will display her displeasure if a new horse is moved near her until she has confirmed her authority!” 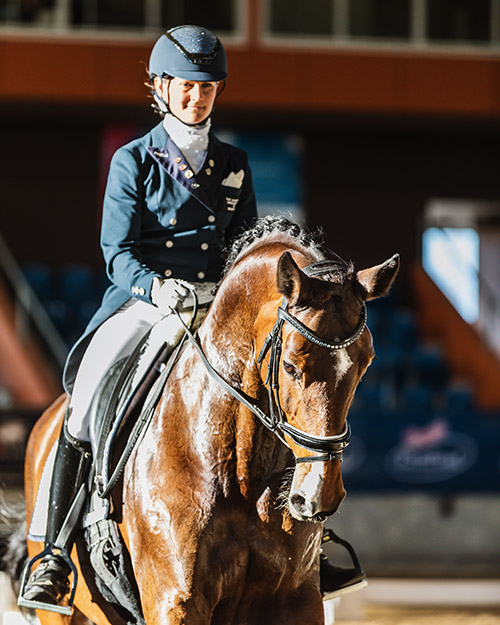 Emma is all smiles in the Grand Prix Special at the Brisbane CDN, despite the highs and lows. © Averil Crebbin / Picture The Moment Photography

To date, Cabaret C has bred four foals via embryo transfer, three of which are ridden by Eliza Tenkate-Cullen, and Emma has the ride on the youngest one who is by Sezuan. “She is a very dominant mare in more ways than one, and passes on strong genetics,” says Emma. “If she wasn’t a dressage horse, she would be a capable showjumper as she has cleared her paddock fence a few times when she first arrived over from Germany. She also cleared the arena wall a few times whilst learning flying changes!”

So how does Emma cope with an international dressage horse that is quirky and opinionated? “I’ve never been to the point with her that I’ve felt I’ll never improve things, so I never give up. I know I can always be a better rider, so it’s up to me to get it to work. Yes, it would be nice if she was easy all the time, but sometimes that’s not how things are meant to be in life… so let it go and focus on the next ride!

“It’s hard to prepare in the training at home for the way she reacts at competitions, because the heightened emotions she feels in the competition atmosphere override her mental capacity to process what’s being asked of her. So at home I just continue to work on throughness and confidence in the work. I have no hesitation that we will get to that point of trust and confidence in the competition environment. What makes me nervous are situations out of my control, for example, an injury that could jeopardise the time I have left with her.”

At the Brisbane CDN, Emma was certainly subject to the mare’s highs and lows. The pair won the Grand Prix with a big score of 71.413%, before being eliminated in the Special the following afternoon. They were pulling off a beautiful test until the mare unfortunately hopped over the side rail and left the arena early, apparently unsettled with the afternoon sun suddenly at eye level.

“I was actually very surprised with the reaction in the Special at Brisbane as she felt very much with me and relaxed. This made me nervous for the Freestyle as I felt I had no real control and no warning it was coming. I said a few prayers and just put everything I had into the ride and we made it through!” The two Emmas did more than make it through the Freestyle test; they won with a score of 72.650%!

“It’s hard to explain how I cope mentally with the highs and lows. I celebrate a good performance and am certainly disappointed with a bad one, but I don’t let it bring me down. Maybe I am used to it! I think I just see the potential and what could be achieved and focus on that. I very rarely revisit a bad performance in my head. I acknowledge it and try to understand what went wrong in that moment, but then I push it aside and move on.” EQ