For those of you catching up with the Carolyn Law (Lieutenant) journey, she was about to board a flight from New Zealand to start work for Karl Jurenak at Tibor Equestrian Centre in Sydney. 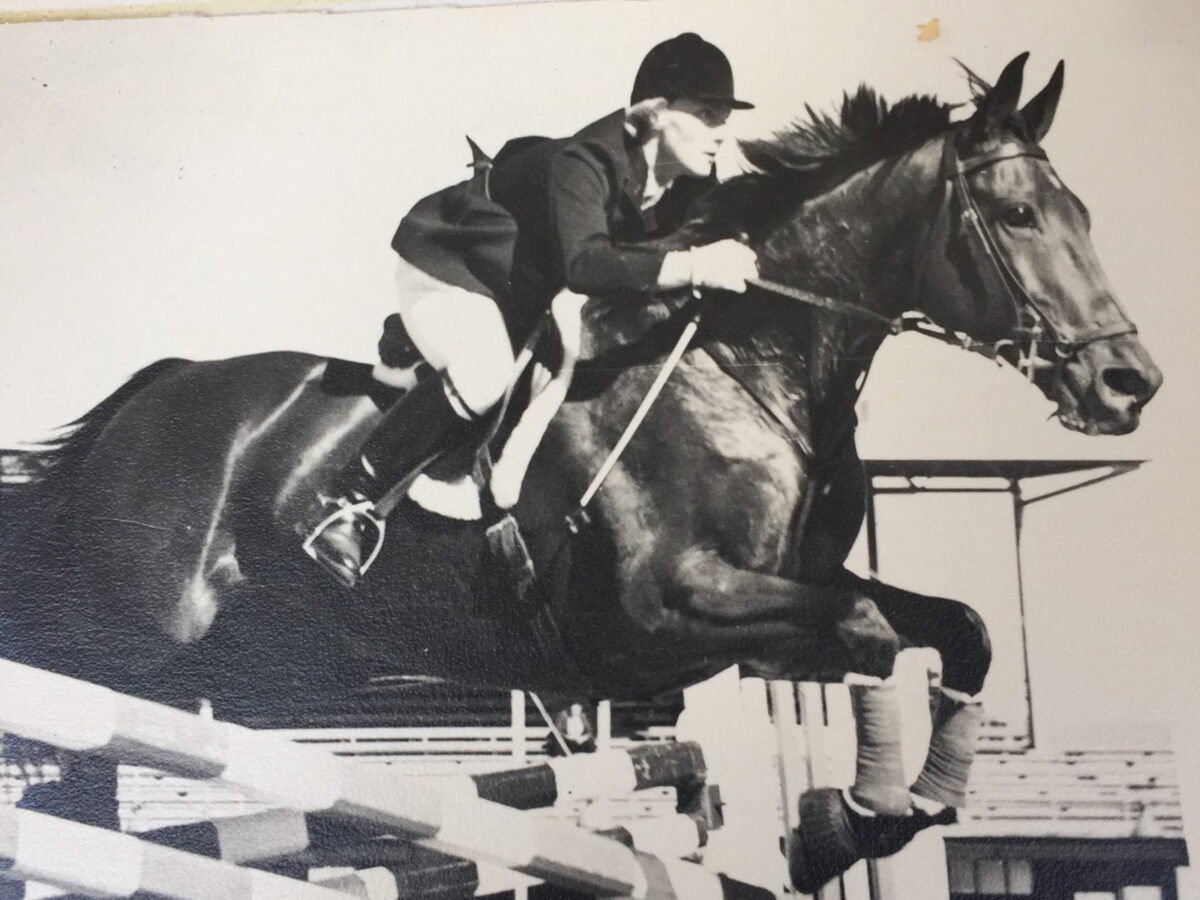 “Carolyn had about 10 days
to get to know an
A grade showjumper.”

Carolyn’s life and travels have been quite amazing given that she was able to do what she did back in the day when air travel was long and difficult. There were no mobile phones… there were telegrams and airmail letters! No internet! No easy money transfers! Travel was challenging and Carolyn revelled in the “get out there and have a go” attitude that her adventures demanded. She was driven, enthusiastic and an activist, and jumped at every opportunity to gain experience.

So, back to the flight. Carolyn landed at Sydney to be warmly met by a very glamorous Pam Rose, mother of Vicki Roycroft and Joanne, and spent the night at their family home. Carolyn admits it was an eye-opener going from bucolic Gisborne, NZ, one day to the Roses at Double Bay the next!

The next day it was straight out to start as a working pupil at Tibor in Kellyville, west of Sydney, an equestrian centre newly established by Karl Jurenak and named after his Hungarian heritage. The urgency behind Carolyn’s move was because a new rider was needed for Harvest Time, a good showjumper of the Roses. His regular rider, Joanne, had just married and sister Vicki was too young to take over. Carolyn had about 10 days to get to know an A grade showjumper and ride him at one of the most prestigious shows in Australia!

Carolyn was excited and humbled to ride such an experienced horse and to be given the opportunity at such short notice was memorable indeed. Harvest Time was a very elegant, brown thoroughbred — spooky but a competent jumper. As usual, Carolyn took it in her stride and, after only 10 rides and a warm-up at a show jumping event at Warwick Farm, she rode extremely well to gain a third place in a major class at the Sydney Royal. It was then back to Tibor as a working pupil for Karl. The work was hard and varied but it was a great opportunity to see the best and to train with such an expert.

Later that year it was off to Melbourne Royal Show with Harvest Time and an enormous win in the Alice Laidlaw Memorial Trophy, an event for lady riders over jumps. This is a very prestigious event and could be likened to the Garryowen, except over jumps! As it was in those days, horses did many different classes and Harvest Time won both dressage and showjumping events, as well as being on the NSW team.

Back at Tibor, Carolyn continued to work hard, ride well and soak up the learning experiences. Her rewards for her work were lessons with Karl, and her board and lodgings! Carolyn made the most of it and would travel with Karl to watch him train other clients, of which one was the Fields’ fabulous, iconic liver chestnut Mazeppa, who was ridden by Ross Field. Ross owned a large meat business, TA & RA Field Meats, and work commitments sometimes prevented him from riding Mazeppa at some of the shows. Carolyn was again in the right place at the right time and seized the opportunity. 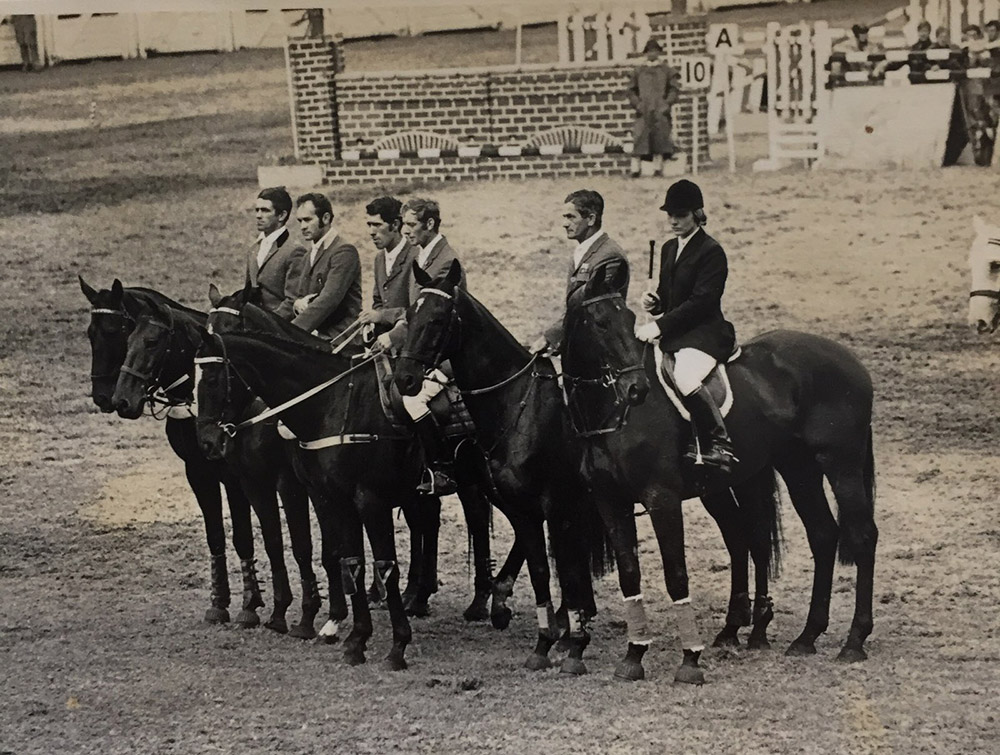 Carolyn was among eight riders to compete at a special showjumping event, held at the 1970 Sydney Royal for the Queen!

“In 1970 a special showjumping
event was held at Sydney
Royal for the Queen.”

The Fields’ property was at Pennant Hills, not so far from Tibor. As luck would have it for Carolyn, Ross was unable to attend the Melbourne Royal in 1971 due to his work commitments and so Carolyn, through Karl, took the ride. She remembers so well winning classes on the wonderful NZ thoroughbred by Balloch at the Melbourne Royal, and above all remembers the workout for champion against the very famous Vince Corvi. She recalls just the two horses on the entire Melbourne showgrounds, and being awarded the championship was a never-to-be-forgotten moment.

Carolyn fondly remembers Tony Haynes, “a charming man” who groomed for the Fields. He was a quiet and loyal person who loved his work. Anne Field also competed and had Ballywick at the same time as Mazeppa, another NZ thoroughbred by Balloch who was also extremely successful. Tony was always there to be the most fabulous groom to his beloved horses. There is now, at Sydney Royal, the Tony Haynes Memorial Trophy for the hack from 15.2 to 16 hands. (I have to say here that I was the inaugural winner of that trophy with the liver chestnut, False Alarm). Carolyn remembers the days with the Fields and Tony and the wonderful Mazeppa with fond memories. 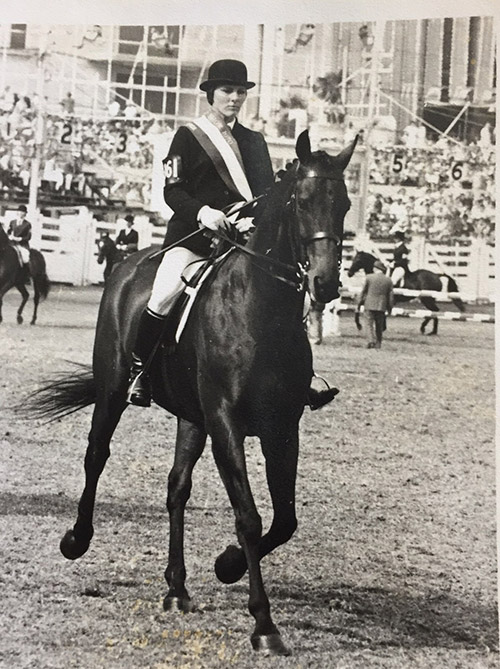 Carolyn won Champion Rider at Sydney Royal on Raeburn in 1970.

“Carolyn was offered
Raeburn, who she had
never ridden before.”

There was another milestone when in 1970 a special showjumping event was held at Sydney Royal for the Queen. Carolyn was among eight invited riders, including Kevin Bourke, Lyndsay Ball and Kevin Bacon, to mention a few. Carolyn says she had two rails down but so well remembers being introduced to the Queen, who asked about her NZ heritage.

That year Carolyn also won Champion Rider at Sydney Royal on Raeburn, who won a hack class. Harvest Time was ridden in that class by Joanne Rose, while Carolyn was offered Raeburn, who she had never ridden before. Her champion rider status was amazing at Sydney Royal, winning again in 1971 and reserve in ’72, before regaining champion in ’73 and ’74, and then deciding to quit while she was ahead!

Carolyn also competed in eventing and had a NZ horse by Royal Shoal who was quite successful and won three one-day events and qualified for the Melbourne Three-Day Event.  He was a bold horse, albeit a little rude, but a good mover and was always up there after the dressage. Unfortunately, he broke down in the final preparation.

Carolyn enjoyed eventing and it made her a very well-rounded and competent horsewoman. Karl was a good jumping trainer who went on to become assistant coach to Franz Mairinger for the Australian team for the 1988 Seoul Olympics, and Carolyn revelled in the gridwork and the related distances that he always set up during her time at Tibor. Carolyn also helped in the training of some young showjumpers, including Tasman who went to Colleen Brook, Goldray who was with David Robertson, and then with Marianne Gildchrist and Florian, who ended up also with David Robertson, to mention but a few.

“Karl was a good jump trainer and I remember that at Tibor on the jump arena there were also some natural obstacles in stone walls and logs that we used to train over,” says Carolyn.  “It was a fantastic time and I was so lucky to become associated with such amazing owners who trusted me with their wonderful horses. In hindsight I can’t thank them enough for the opportunities I was afforded.” 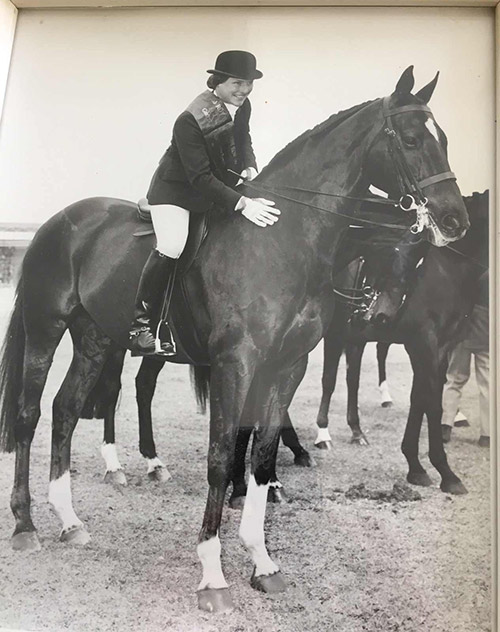 Carolyn and Mazeppa, winners of the Garryowen in 1972.

“If I keep my elbow close
to my side, no one will see.” 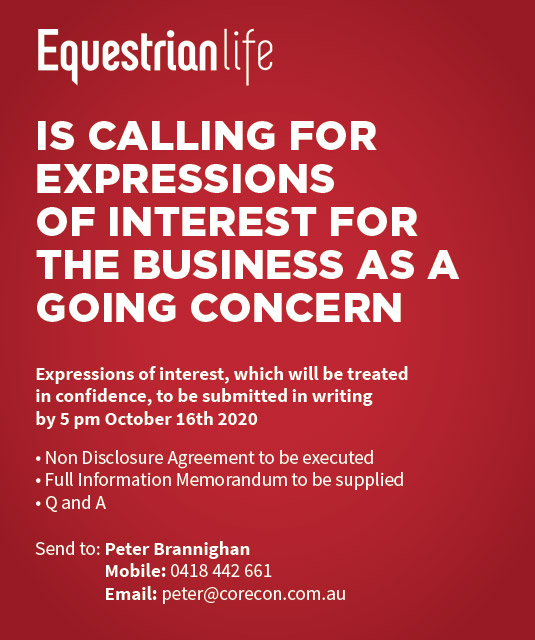 It was in 1972 that the Fields encouraged Carolyn to ride Mazeppa in the prestigious Garryowen class at Melbourne Royal. Mazeppa, himself a champion hack, and Carolyn a champion rider, was a pretty good start to a competitive edge! Needless to say, there was the costume and saddlery to be considered. Anne Field had already won the Garryowen and so her bridle and saddle were for Mazeppa. Carolyn was not prepared to spend a fortune on the costume but did get new boots and a new bowler, which she needed.

As for the breeches, it was the Harry Hall stretch breeches that were very “in” at the time and so Carolyn bought a new pair. Anne Field had them hand-stitched and the appropriate buttons for the bootstraps put in place. Her jacket was Pam Rose’s, and so her outfit was fairly neat and tidy despite no woollen traditional hand-picked breeches — and Carolyn was not punching a hole in her new bowler for a lanyard! Of course, Tony Haynes was there and presented Mazeppa immaculate to the nth degree.

It was not so long before the Royal that Carolyn had met John Lieutenant at a party in Sydney put on by a Swedish friend. He flew down to Melbourne to watch Carolyn and, despite not knowing a thing about what was going on, was the loyal supporter with a friend of Carolyn’s, Jeannie Paynter. John and Jeannie sat in the stand freezing to death watching and bolting to the bar for a whisky to keep warm, hoping not to miss Mazeppa, which they managed well.

Carolyn was legged up in the stables ready to go out in the class, when she felt that the zipper on the left side of her breeches had let go. In Carolyn’s words, “I was about to have a little tantrum, but after a few deep breaths and looking down from on top of Mazeppa at so many friends, I took a deep breath and thought ‘if I keep my elbow close to my side, no one will see’. I did just that and in those days you did not have to get off.”

Carolyn won this prestigious class. She remembers that the saddle was very high in the pommel and as she rode away from the judges she had to very cleverly pull herself back up to the front of the saddle as it was throwing her so far back. It was a prestigious win on a lovely horse that stays at the forefront of her memories.

Back to Tibor and Carolyn was still a working pupil, although John was now on the scene and they were becoming the best of friends. She believes that her parents were not so in favour of her move to Australia and would have preferred she had stayed in NZ, but Carolyn, in her strong, determined and attentive way, chose to take the chance.

Originally from Belgium, John was a very easy-going guy and a little older than Carolyn. She described him as a charming and well-mannered, easy to get along with gentleman. He was passionate and emotional and loved life. In 1973 they moved in together in Carlingford where Carolyn continued to commute to Tibor. It was at this time that more staff were put in place at Tibor and soon after Carolyn moved on…

Stay tuned for the next episode in an incredibly interesting equestrian life! EQ

Catch up on Part One of Carolyn’s story in our August issue here.

Catch up on Part Two of Carolyn’s story in our September issue here.