WITH EMMA FLAVELLE-WATTS
content placeholder
Foals can be a bundle of fun, but they do need careful training. This foal, Boris, is the grandson of Harrie Smolders' top showjumper Emerald. © Elli Birch/BootsandHooves
Previous
Next

Just as it is with people, first impressions and experiences can set a foal up for life. How you interact with your foal from the outset will go a long way towards its trainability and how it relates to humans. And oh yes, they are a bundle of fun. 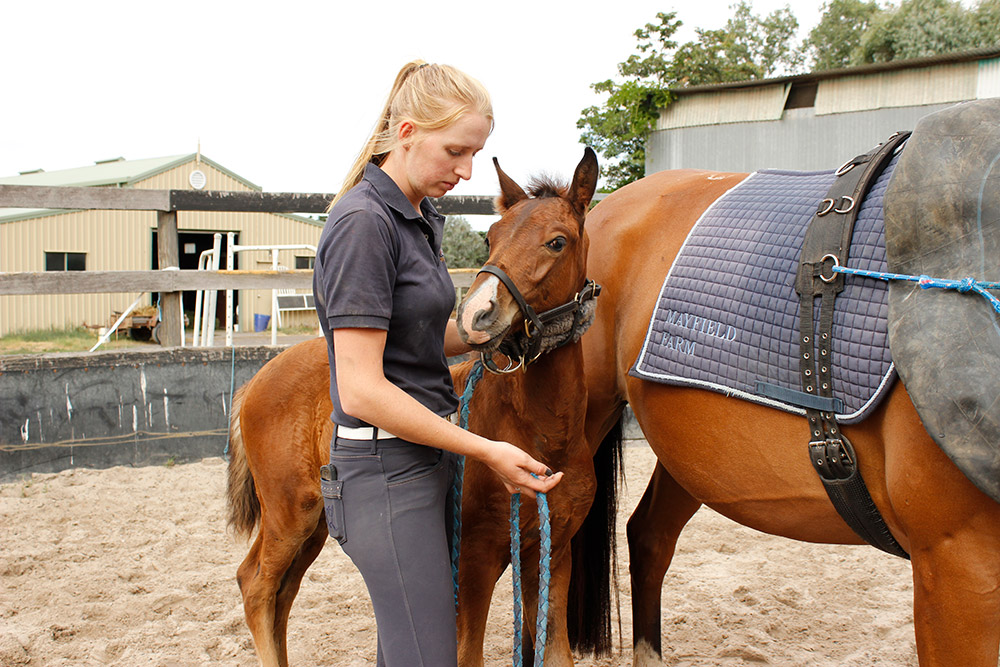 You want the foal to get used to being handled while young.
Click here to discover Virbac’s horse health hub 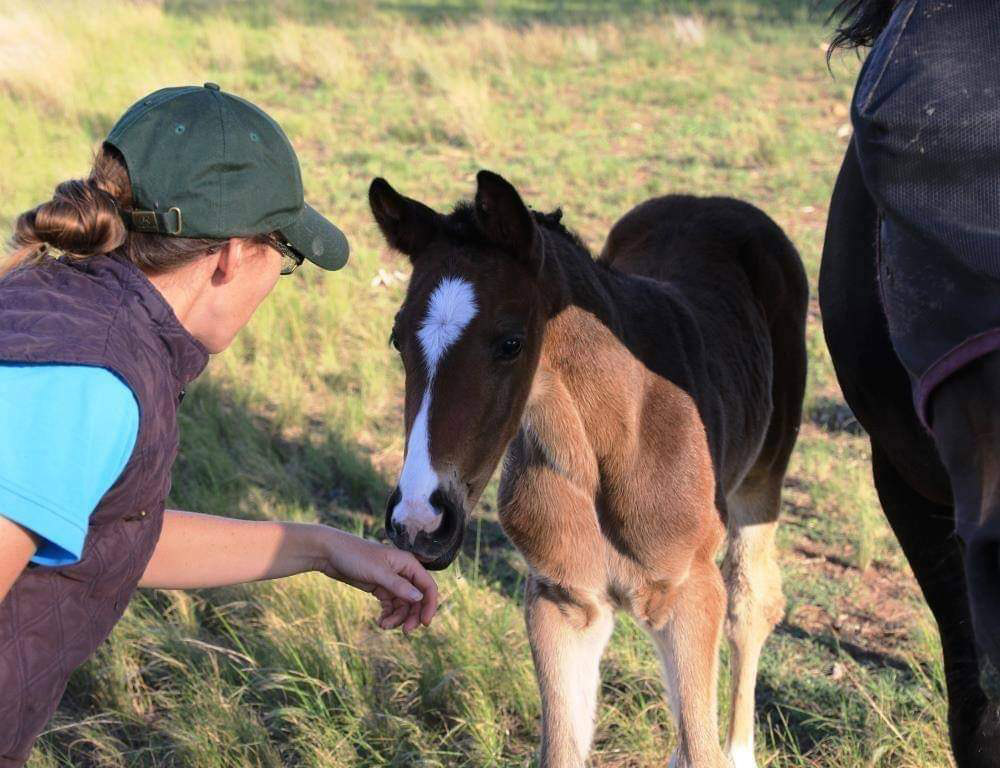 Try to do things, such as touching the foal, in a way that the foal thinks it’s his idea. © Amanda Young

“You want your
foal to learn that…
we are trustworthy.”

Spring is sprung. The season for foals. What joy a new foal brings to us. At times breeding is heartbreaking but the rewards are many. How lovely it is to waste a spring afternoon with your foal. Like all baby animals they are curious and playful, with a short attention span.

As a psychiatrist, I believe that the early experiences that any of us have really influence our lives. Handling your foal in a way that encourages curiosity and confidence, a wish to be with humans and a willing yield to pressure, will set your foal up to have a better life. As Tom Roberts said, train your horse well so that he will have a good life and be welcome anywhere.

Thirdly, you want him to learn to yield to pressure. You want him to learn to move away from pressure when he leads, or when you move his hindquarters with your hand. You can teach him to tie up. I wouldn’t suggest tying him up until he is a couple of months old, but the principle of yield to pressure you can start to teach right away. I think it’s beneficial to teach a foal in the first few days that you can hold him still. Do this when you are stronger than him, in a few weeks he will be stronger than you.

The principles of learning theory still apply. Wherever positive reinforcement is appropriate it should be practised. A very young foal won’t eat treats and won’t automatically enjoy scratches, but he will learn this quickly. Pressure-release training is the basis of handling foals. Be quick to reward a foal by moving away, take pressure oﬀ. Foals are curious and playful — use that to your advantage. Try to do things in a way that the foal thinks it’s his idea.

We keep our foals in extra-large stables for the first few days so it’s easy for them to learn that we are friendly. You need to take time and have patience. Don’t be in a rush, but keep each lesson short. Several short lessons each day where you aim to let the foal come up to you are much better than one long lesson. Don’t interfere with a foal’s need for sleep and drinking. A stressed foal may seek a drink. Let this happen and slow down. 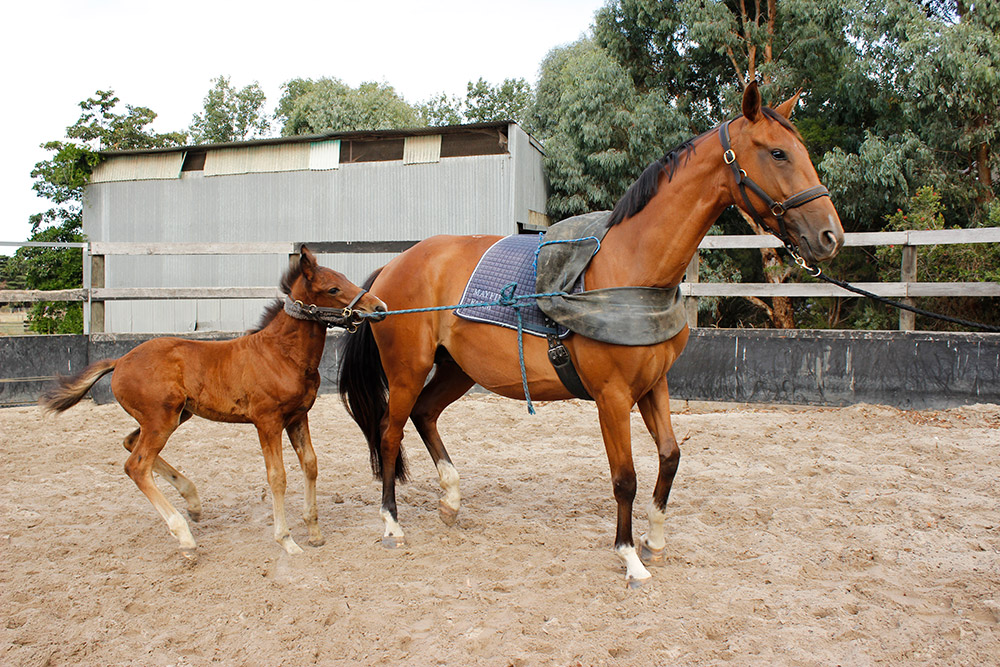 Teaching the foal to lead, initally from his mother. There will always be some resistance in the beginning. 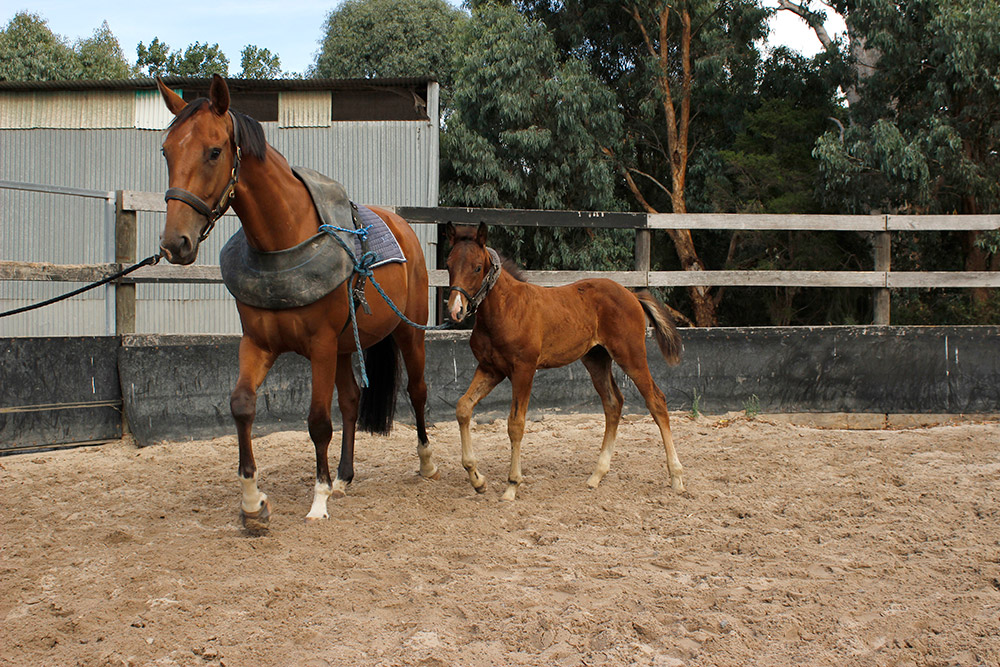 The foal has a strong instinct to be close to his mother when worried, and it isn't long before he will give in to being led be her - thus releasing the pressure! 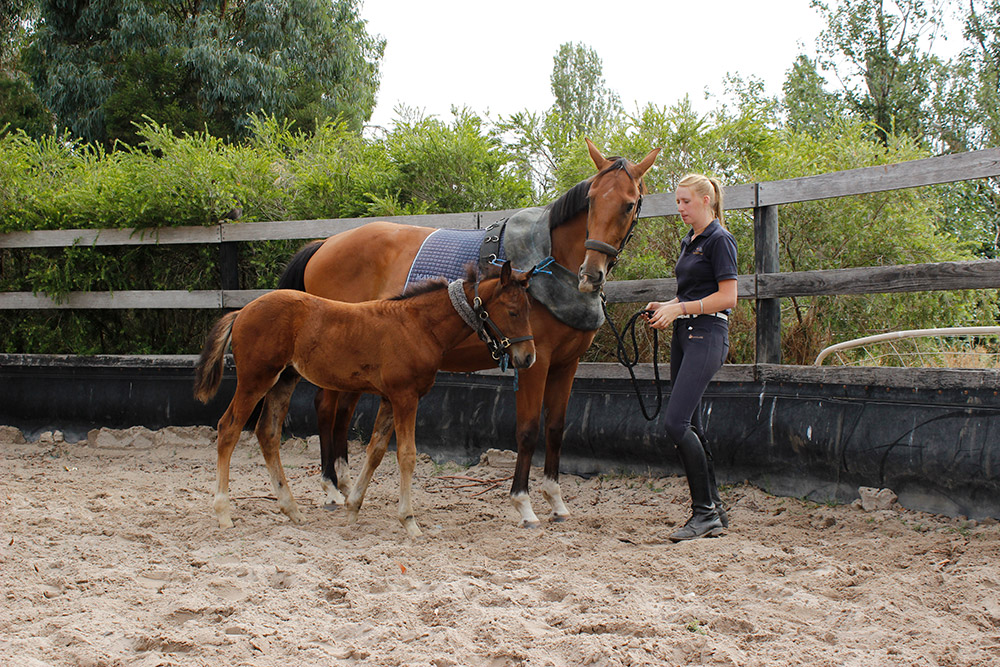 Relaxed and happy, the foal is now ready to get used to being led be humans.

There is not a right way of handling foals. Several diﬀerent systematic approaches will bring good results. I don’t like the so-called “imprinting” approach. But I do think it is good to rub a foal all over when he is first born so he gets used to your touch. Croon to him gently so he gets used to your voice right from his first moments. After this initial experience I like to follow the basic principles of the Jeﬀrey method. Be attuned to your foal and keep an eye out for when he is uncomfortable about having you nearby. If he looks uncomfortable, back oﬀ. Ideally you want him to touch you, rather than you touching him. A good way to start is to crouch down in the stall and stay still.

Allow his curiosity to motivate him to approach you. Often a foal will be more willing to approach you if you are smaller, which is why crouching down works. Another way to get a shy foal to touch you is to stand on the opposite side of the mare and reach around under her neck, leaving your hand on her shoulder. He will be more confident to investigate your hand if it looks like it’s a part of her. Of course, he knows it is not her, it smells diﬀerent, but he will be curious about it. If he touches you, take you hand away smoothly, to make him more curious. Then repeat this until he starts to accept your hand, and then accept you. Make haste slowly. 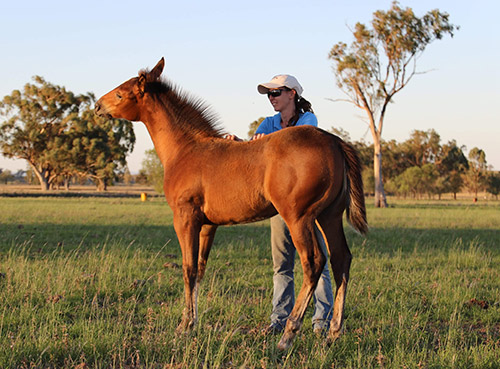 He is likely to enjoy his wither or under his neck to be scratched - so that can be good way to build trust! 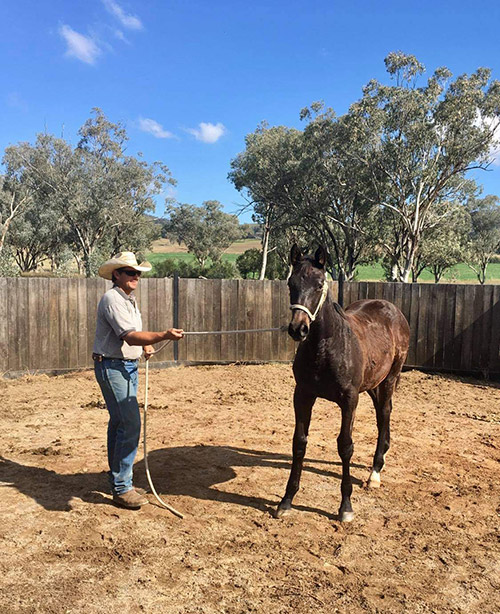 Repeating the leading lessons with humans; there will be some resistance to begin with. © Amanda Young 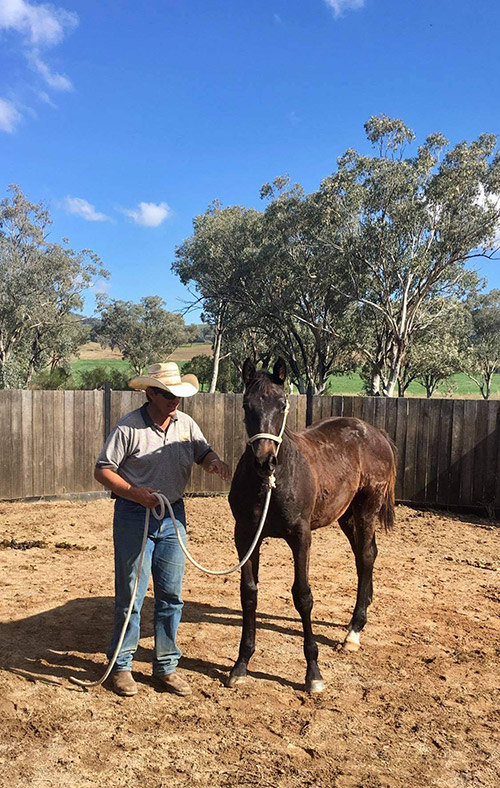 Remember to release the pressure as soon as they yield.

“Enjoy your foal and have fun with them,
but don’t let them learn
potentially dangerous things.”

When he accepts your presence and your touch, you can slowly start to rub him somewhere he likes. He is likely to enjoy his wither or under his neck to be scratched. Don’t try to approach his head until he is confident. Often it works best to approach him from behind and to the side. If you are using the Jeﬀrey method, you approach until he shows signs of discomfort, his head comes right up on alert, he looks like he is ready to move away, then you back oﬀ just a fraction to where he is comfortable, then approach again. Another diﬀerent approach is to approach him until he stops, and then reward him by moving away. Release the pressure (move away) when he does what you want (stops). This can work really well too. I prefer the first way, as you won’t find yourself chasing a foal. I don’t want him to have the feeling I am chasing him like a predator. I want him to feel that I am noticing what he is communicating to me and that I will respond to it. In this early stage don’t be greedy and try to catch him, unless you have to for veterinary attention.

If you do need to catch him try to do it in a way that he puts his head in the halter out of curiosity, not you lunging at him. Let him smell it first then remove it. Then oﬀer it again. It can also be friendlier to let him get used to the halter across his back first and then do the neck strap up before you put the buckle across his nose. We have a specially made neck strap in foal size and we can use this instead of a halter for a timid foal. You must be especially careful when handling a foal’s head that you don’t ask too much and frighten them.

Just as you do the groundwork with an older horse teaching yield the quarters and yield the shoulder, forwards and backwards, you can teach all this to a young foal even before you put the halter on him. Already think about the quality of relaxation and suppleness rather than just obedience to the pressure. Don’t force him or frighten him to yield to pressure. Just press on him. Be patient and reward even a little movement in the direction you want. When you ask him to go backwards out of your space, put pressure on his chest. Do not put pressure on his head. You can pinch the muscle under his neck down near the shoulder to get him to move backwards.

When he will accept a halter, you can start by getting him soft and bending his head around to you. When he does this softly you can push the quarters across. Voila! The turn on the forehand that you want later on.

We teach our foals to lead when they are at least a couple of months old by tying them to a roller on their mothers first. An inner tyre tube around her neck and attached to a roller ensures the roller won’t move. A neck strap on the foal helps prevent injuries. A quick release knot is essential, as is a safe place like a round yard or stall. Tie him up to her fairly short. He may fight the restriction, but he will naturally seek his mother’s contact when he is frightened or stressed so he will fairly quickly want to jump towards her. When he jumps towards her, that pressure is instantly released… so, a double reward. In no time he will allow himself to be led around by her. He will also have learned to tie up. And you as the human have not been the direct cause of his discomfort. Nor have you risked rope burn or him learning that he can escape. A couple of lessons like this and he is ready to be led by a person.

A reluctant foal may still benefit from a rope around his rump as well, to minimise the pressure on his head. Always be quick to release the pressure on the rope as soon as he goes forwards. Remember, it is release of pressure that teaches the lesson. I like a foal to learn these things as soon as I think they are strong enough to cope. A larger horse can easily injure himself learning to be tied up, so teach them when they are small and less likely to hurt themselves. Also, one never knows when injury or illness will occur. It’s best to teach them some of these things in case of emergency. It adds greatly to an injured foal’s distress if he is coping with injury and learning how to yield to pressure at the same time.

Enjoy your foal and have fun with them, but don’t let them learn potentially dangerous things like that they can play rough games with you or push into your space. Don’t reprimand a foal by hitting it, especial near his head. Push him away by pushing his shoulder or that muscle under his neck.

Use your voice and your posture to let him know that it is not okay to nip or push you around. Later on, you can introduce him to obstacles or things like umbrellas by hiding treats in them to encourage him to explore unfamiliar things. EQ