WITH MEGAN JONES & JAMES DEACON
content placeholder
Lizzie the Legend and Red McConnel demonstrating the stop, a key component of a reining or cowhorse run. © Miss Jane Photography
Previous
Next

If you crossed a Gypsy Cob with a Clydesdale, what future would you propose for the resulting foal? There’s no doubt you would be breeding an eye-catching harness prospect, however, would it be crazy to think that this foal would become a horse who could do everything from working and roping cows, to barrel racing, to show hack classes, to cowboy dressage? 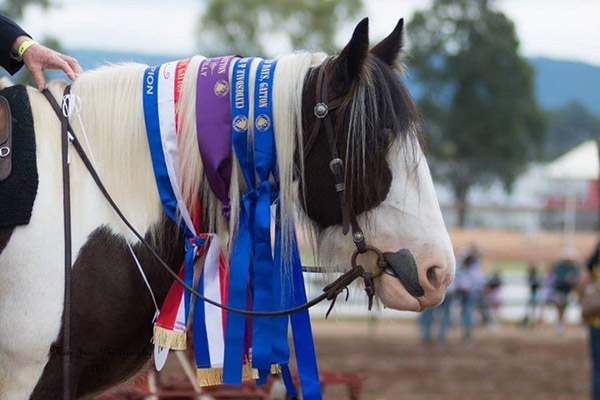 A haul of ribbons for Lizzie the Legend.
Purchase a pair of Women’s Heritage IV Paddock between November 1st and December 31st, 2020 at the promotional price of $229.95. Normal RRP $259.95. Available at participating Ariat stockists and on ariat.com.au, while stocks last.

“She’s still a funny girl,
in that she’s not a very
friendly horse!”

Meet Lizzie the Legend, the 15.3hh nine-year-old Gypsy Cob/Clydesdale cross mare who wins fans and breaks stereotypes wherever she goes. At a time when each equestrian and western discipline has become quite specialised and the horses involved increasingly look like they are cut from the same cloth, Lizzie proves that a good horse can be any breed, shape or colour!

Bred in Central Queensland by Jane Stephens, Lizzie the Legend is a registered Drum Horse. Her dam is a 17hh registered Clydesdale mare named Shiralee Abagail, and she is by an imported 14hh Gypsy Cob stallion, Windenvale Watson’s Caval Ridge.

As Lizzie’s current owner Red McConnel explains, “Jane is a very good friend of ours, and she had been breeding purebred Clydesdales – then she branched out and started putting Gypsy Cobs over her Clydesdale Mares – so Lizzie arrived! At the time we were shoeing a lot of horses, and shod all of Jane’s, and so we knew Lizzie from the very beginning.”

While Lizzie was a very cute foal, she was certainly a handful. From a young age she was bossy and opinionated, and on more than one occasion she kicked out at admiring visitors before chasing them from her paddock. Jane did not hesitate to ask her friend Red – a very experienced horseman, trainer and colt starter – for his help in educating the clever, quirky and somewhat unruly youngster.

Red’s involvement continued; when the time came for Lizzie to be broken to harness and saddle, Red was the man for the job. Jane regularly sent Lizzie to Red for training, and as the relationship between the big mare and the cowboy developed, Jane was forming her own partnership with a wonderful Quarter Horse gelding with whom she was having a great time competing in cowhorse and cowboy dressage events.

“Jane was having a lot of fun with her little gelding Max, who is a great little horse, and then she would get back on Lizzie and try to ride her, and Lizzie is just so big and strong and powerful that Jane wasn’t really enjoying riding her,” Red explains. “So she eventually she said to me ‘If you don’t want her, I’m going to sell her’.” I said I’d be devastated if Jane sold her, so she wrapped her up in tinsel and gave her to me for Christmas!”

Since receiving the best Christmas present he could have imagined some three years ago, Red has continued to nurture Lizzie’s unique nature and ability. “She absolutely loves having a job to do and she really enjoys working cows,” Red explains. “She’s still a funny girl, in that she’s not a very friendly horse! She puts up with people. She doesn’t suffer fools very well. But she loves going to work. So I’ve always taken her mustering and that sort of thing. She’s always shown quite an aptitude for working cows, and she’s very athletic. She’s got a beautiful hock on her and she can run and stop and turn around like any Quarter Horse.” 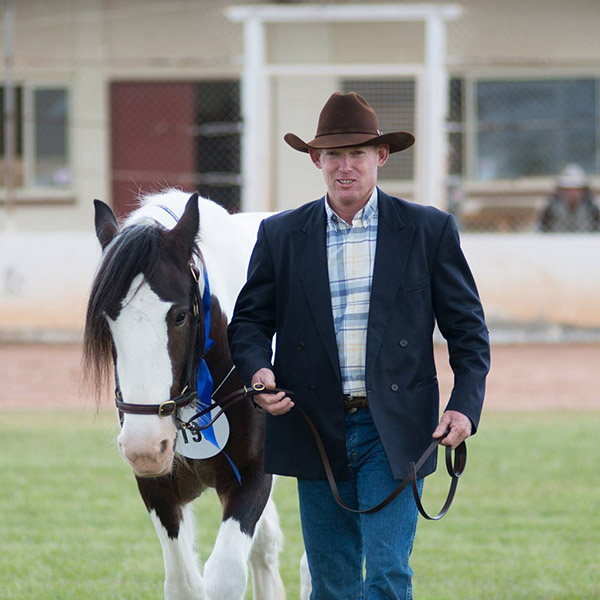 Lizzie and Red have formed a strong partnership over the past 9 years.

With Red in the saddle, Lizzie the Legend has shown her skills at a range of disciplines including Working Cowhorse, a western sport dominated by Quarter Horses bred specifically for their cow-sense and physicality. A true working horse, she never shies away from a long day of work, whether that’s roping calves, helping to train and handle young horses, or riding the range.

“A friend of mine and I were looking for cattle in the mountains at Mount Morgan a few years back. We clocked it on the GPS; up and down the hills we did 52 kilometres in one day. We got back to our trailer at nine o’clock that night, and she lined up ready to go back to work again the next day,” Red recalls. “She doesn’t care what the work is. You can ride her bareback up the hill or put her in harness, she doesn’t mind as long as she has a job to do. If you thought she was ever going to be a garden or paddock ornament though, not a chance!”

When Red first became Lizzie’s owner, he had a plan to move to America with his wife, Jo, and take Lizzie the Legend with them. “I wanted to get right into the cowboy dressage with her, but that plan has obviously gone by the wayside for a while. Not saying that we won’t get there, maybe one day – it would be good to take her over and really see what she can do – the scene is phenomenal over there.” 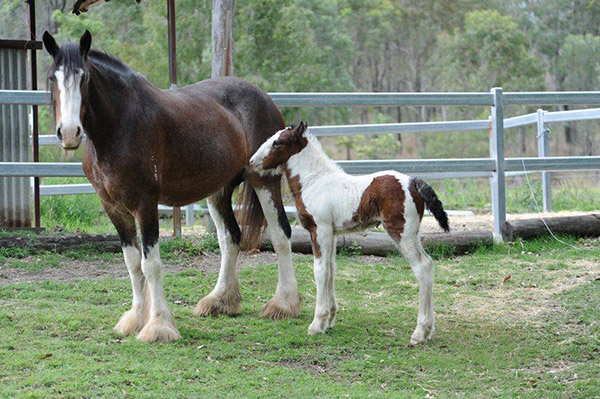 Lizzie the Legend as a foal, with her 17hh purebred Clydesdale dam. 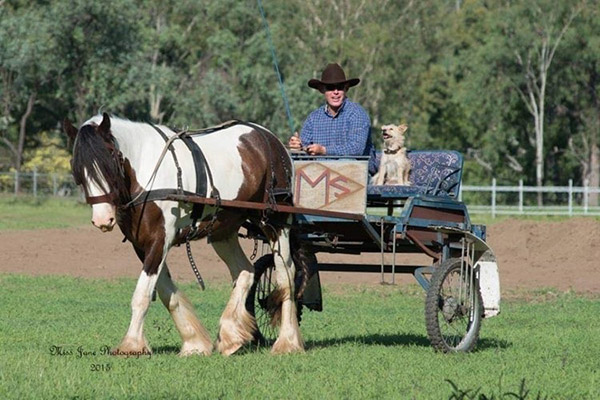 Lizzie the Legend in harness. 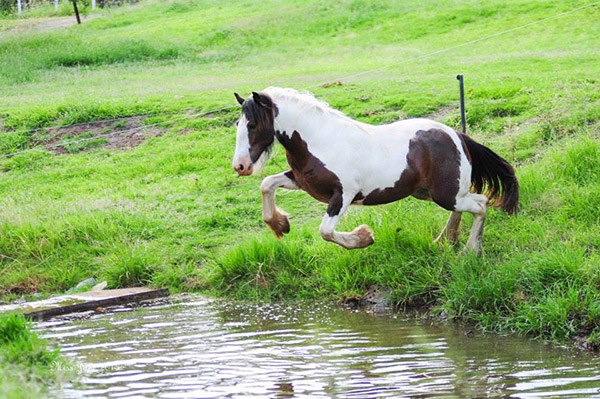 Lizzie the Legend is yet to turn her hoof to eventing, however judging by this photo she has the scope and bravery required! 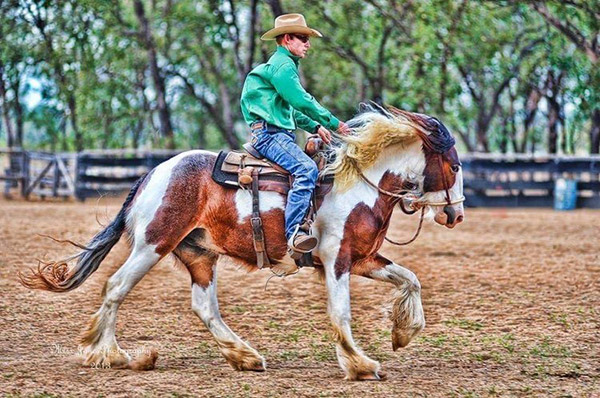 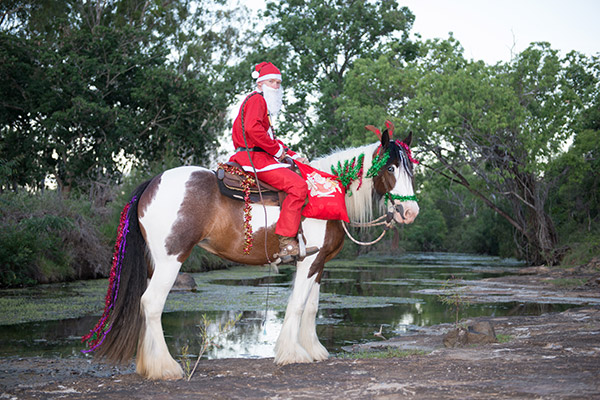 We can only imagine how much shampoo was used to make Lizzie the Legend's feathers shine so white and bright for this Festive photo! © Miss Jane Photography 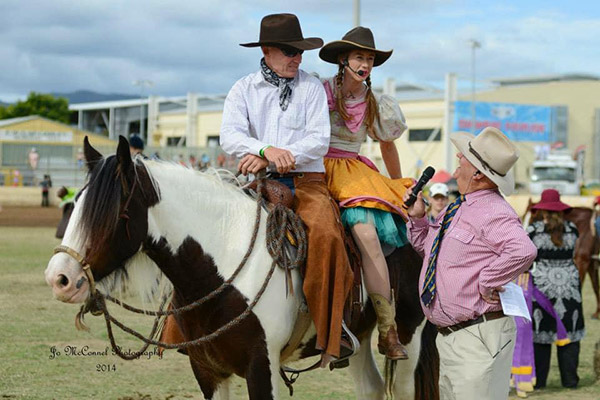 Lizzie the Legend performs at Rockhampton Show in 2014, with S.T Ruth from the CrackUp Sisters © Jo McConnel Photography

Lizzie with her first foal Boo. 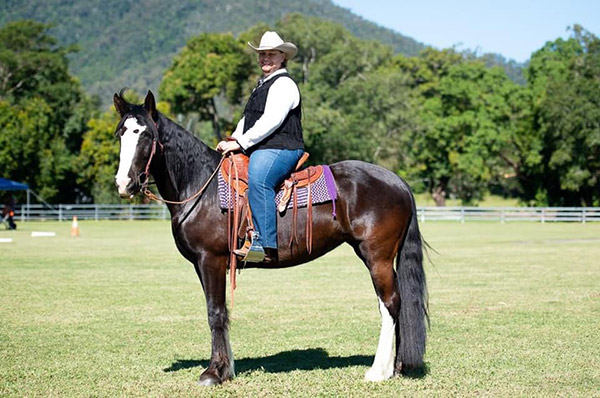 Boo is the first foal out of Lizzie the Legend, and is now embarking on a cowboy dressage career with her owner and breeder Jane Stephens. 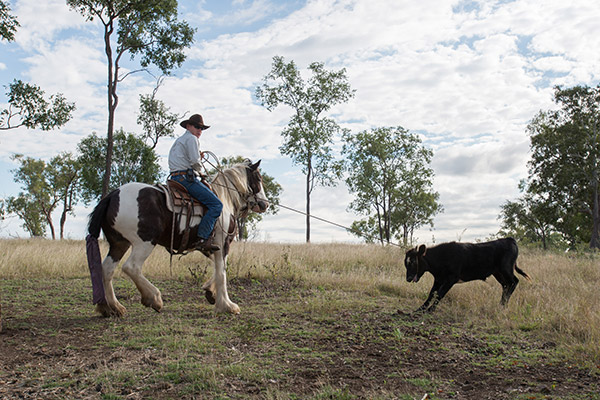 Happiest when she is working, Lizzie the Legend is called into action to rope an escaped steer. © Miss Jane Photography 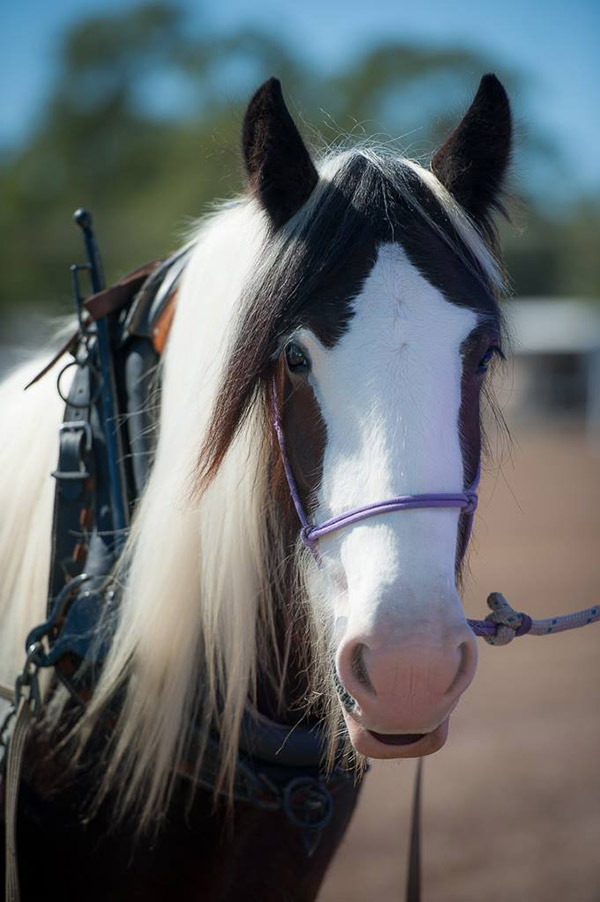 “These ones that we’re
breeding from Lizzie have
tree stumps for legs!”

Red and Jo now manage Trinity Stockhorses in Orange, New South Wales; Lizzie lives there too, and in between stints as a valuable working member of the team, she is also performing one of her most important jobs of them all – motherhood.

Lizzie’s first foal arrived when she still belonged to Jane Stephens. By the imported, cutting bred Quarter Horse Peppy Boontown, Boo is now a magnificent young mare with whom Jane is enjoying competing in cowboy dressage, scoring 71.66% in their first attempt. Raising Boo was not a job that Lizzie thought much of though; in fact, she simply fed her and left the rest of the foal’s care and attention to her own mother, who she was paddocked with at the time.

Lizzie’s second foal was bred by Red, a colt named Bruce by the cutting bred Quarter Horse Early Oak. Fortunately, Lizzie has now decided that motherhood is a worthwhile job, doting on Bruce and raising him beautifully. Red hopes that Bruce will grow to be as versatile – and legendary – as his dam.

“I only breed for myself. I breed the sort of horses that I want to ride, I’m not dictated to by the market. I rode a lot of Early Oaks back in the early 2000s and loved them, they were great horses but I never owned one,” Red explains. “Bruce is only a yearling, and he’s bigger than most two-year-olds already! A lot of horses these days aren’t built to last, their hocks and knees are starting to go out by the time they’re four or five years old. But these ones that we’re breeding from Lizzie have tree stumps for legs! You’re never going to wear them out. They are beautiful straight-legged horses, they stand up to the work and they’ll never need shoeing.”

This season, the plan is for Lizzie to be bred to the great imported Quarter Horse stallion Peptos Stylish Oak, sire of many cutting and campdrafting champions. Lizzie has no problem with staying in work during early pregnancy, and always returns from maternity leave without missing a beat.

As Lizzie is still a relatively young mare, her ridden and working career is far from over. When asked if there are any disciplines he’d like to branch out into with Lizzie, but hasn’t tried yet, Red emphatically states: “All of them!” It seems that the sky is the limit for this dynamic duo, and Red shares his advice for anyone who wants to try their hand at a sport or discipline that their horse may not be bred for.