Merry Christmas, everyone. Well, it’s nearly Christmas, however, here at Ryans we are still busy, busy, busy and dreaming of things slowing down for Christmas.

“There will be no
holds barred between
the two boys.”

Right this moment Wallaby Hill International 3DE is the main focus scheduled for this week starting Thursday 3 December and going through to Sunday 6 December.

I have two horses entered in the top class, which is the Gow-Gates CCI4*-L. The CCI4*-L is what we used to call in the old days the Advanced class in a three-day event. I am still struggling to come to terms with all the new class names! I have drawn the second spot out on my spectacular young nine-year-old, Bronze Boy R. This is such a nice young horse who I bred and I have a real soft spot for him. He is a 16.2hh buckskin who is just the nicest character. Really soft and tries really hard. If you want to know the truth, he is really bred for the dressage arena; however, I do have the greatest confidence in him.

Bronze Boy R clearly has done well to be at four-star level when he is just nine years of age, however, he is yet to win a big class and although he is in great form he is not consolidated at this level yet. Nevertheless, he is a good horse and the day is not too far away when he is going to step up and put his mark on a big class. It’s interesting me saying that he is young, and that accounts for him not being super-competitive, because in the four-star there are actually two other nine-year-old horses and these horses are probably the favourite and the second favourite to win the class.

I think Shane and Stuart are amazing riders and in their prime, and will be in a zone reserved just for super international performances with their two respective young horses. There will be no holds barred between the two boys and I think both will be trying to finish the event with a penalty score of less than 30. That is going to basically mean that they have every intention of scoring well over 70% in the dressage test and then not incurring any penalties in the cross-country jumping and also going under time. That means averaging 570 metres per minute for the whole cross-country course, which entails some 40 jumping efforts and will take around 10 minutes from start to finish. That is just so hard to do. 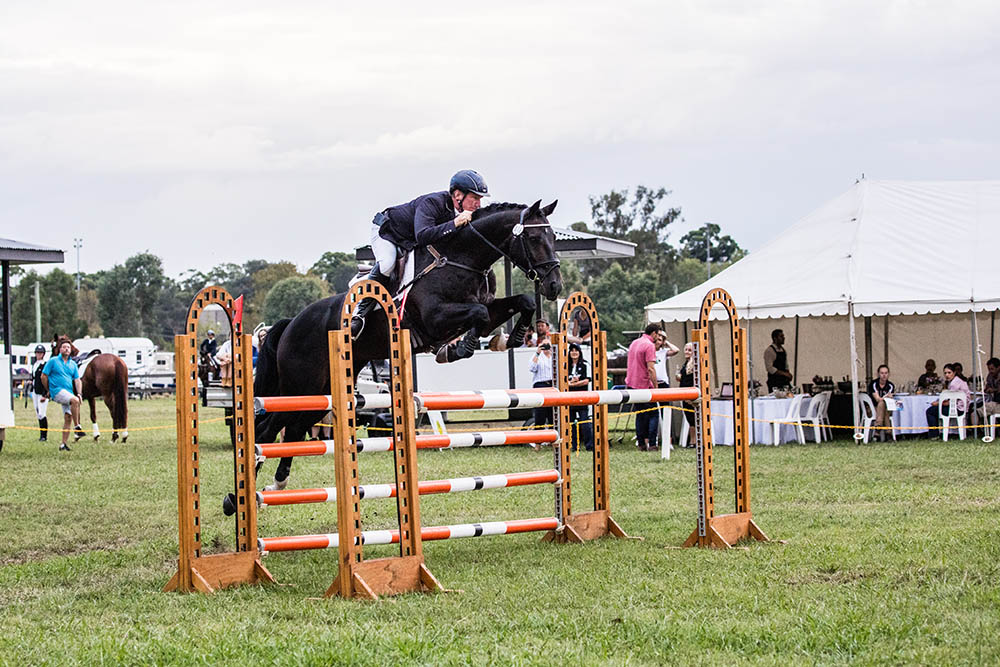 Heath Ryan and Wimborne Constable, who is very reliable in the show jumping phase. © Ryans Horses 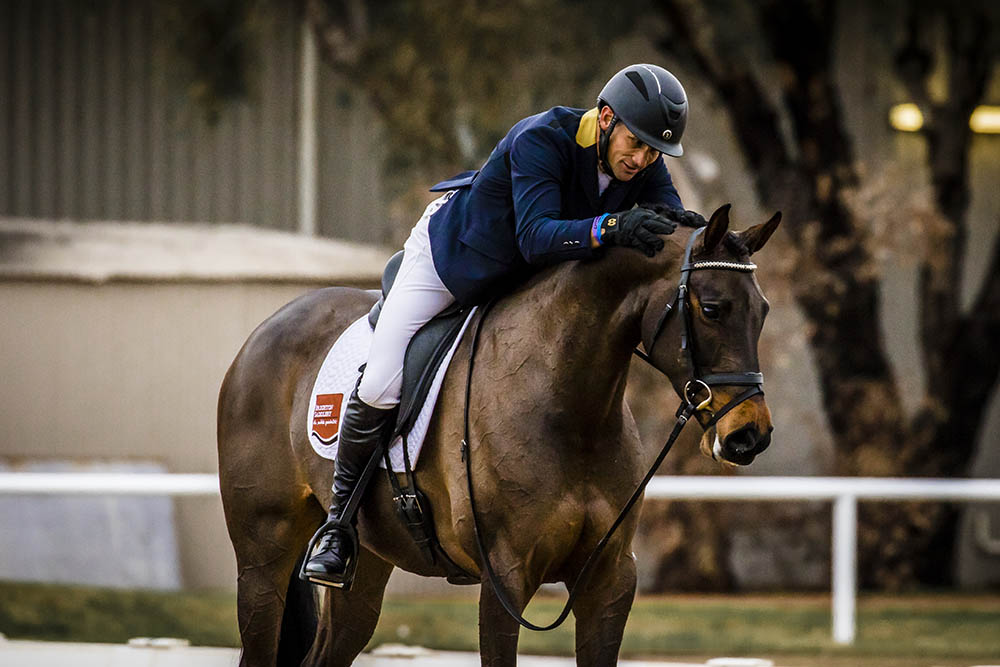 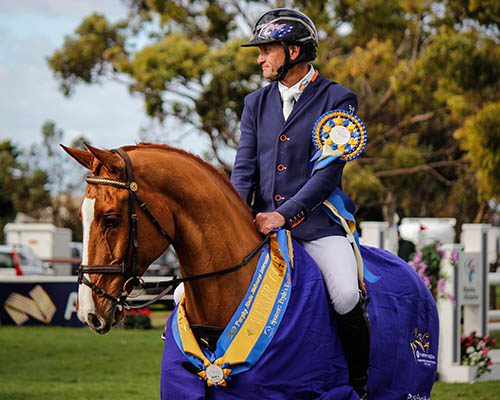 “Just because it is Christmas
doesn’t mean that the foals
won’t keep being born.”

There are some 13 entries in this Gow-Gates CCI4*-L and there are potentially also a few other riders that could go head-to-head with Shane and Stuart. In actual fact, if somebody did do that it would seriously impact on a new combination being considered with Australian Olympic selection for Tokyo next year in mind. With Shane and Stuart being such established superstars, it does make this class of huge interest and also a huge opportunity for anyone else who wants to step up and compete against what is going to be an Olympic standard performance if someone wants to win this class.

Of course, once a rider is able to go clear and under time around a massive course, as is going to be the Gow-Gates CCI4*-L class, the horses then have to trot up sound and happy in front of the ground jury and vets on Sunday morning before competing in the showjumping section. Again, to complete the three-day event with less than 30 penalties will mean that Shane and Stuart anticipate not having any rails down in the showjumping phase on the final day. So, come on Bronze Boy R! We have picked a wickedly tough competition to shine in and just maybe Bronze Boy R’s rider (me) is just a tiny bit past his prime! This will really test Bronze Boy R out!

I also have a second horse in this class who is second last to go, which is the 12th horse out. Wimborne Constable is a 12-year-old stallion, which is still young for this level of competition but much more of a respectable age. Interestingly, Wimborne Constable is the only stallion in Australia competing at this level in eventing. Wimborne Constable belongs to Phillip and Kylie Ewart and he is much more experienced than Bronze Boy R and he also is in great form. I do expect Constable to put in perhaps his best dressage test ever and I do expect Constable to be a solid cross-country performer. To date Constable and I have struggled making the cross-country time at this level and this is our Achilles heel. Constable has probably never been fitter than he is now, so we will see. In the showjumping phase Constable does shine here and normally goes clear. So wouldn’t it be fun if Constable and I could slip around that cross-country course under time. Yee-haa! I know who will be puffing the most — and it won’t be Constable! 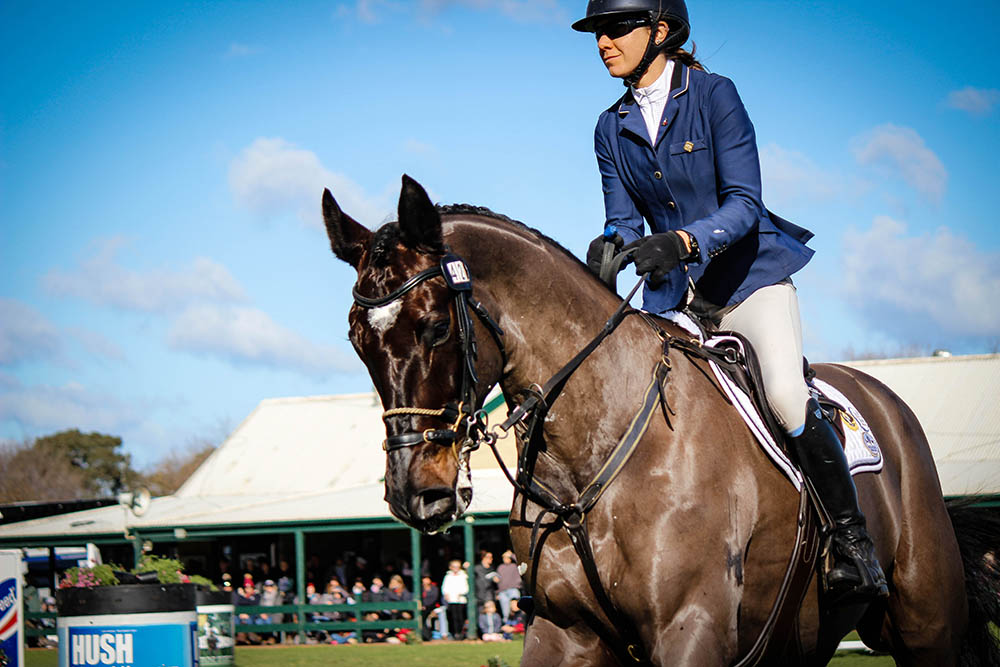 “Christmas for us is
busy, busy, busy… but
such a nice time.”

One of the reasons why Constable is so fit is because he is a stallion and right now it is all systems go here at home at Ryans with the breeding season in full swing. We have six stallions here and all of them are covering mares and supplying chilled semen, which is being shipped all over Australia. It’s actually a really big ask for a stallion to be one moment a breeding stallion who is being encouraged to have a ramped-up libido and producing lots of sperm and then the next minute being a competition horse capable of stretching his neck down and out in the walk and producing relaxation over the back which results in a great four-beat walk with a march rhythm and a high scoring over-track. Very difficult.

We also use imported frozen semen and do embryo transplants from mares that we are riding and competing on. Sarah Clark, who works here at Ryans, has a Casall foal due next year out of her little eventing mare Blue Note who she has won two of her last three events on and came second in the third one. Easy Turn, who is ridden by Shane Rose at this coming Wallaby Hill 3DE, is also by Casall. I am a little worried that Sarah is actually hoping that Shane will win rather than me. This is all very exciting for Sarah and for the rest of us.

Tiani Stewart also works here at Ryans and is also competing at Wallaby Hill 3DE in the Assistant Dogs Australia CCN1*-L class. Tiani is expecting a frozen semen foal in the next few days out of her young Wimborne Constable mare Clair De Lune by Balou Du Rouet. Well, in the Gow-Gates CCI4*-L a horse called LV Balou Jeanz, who is ridden by the South Australian Sarah Clark (as opposed to the young Sarah Clark who works for me), is also by Balou Du Rouet. Again I am worried that Tiani is hoping that LV Balou Jeanz goes really, really well.

Here at Ryans the breeding season is full of plans and speculation and expectation, especially as the foals pop out and start frolicking around the paddocks. It’s busy but it’s also really beautiful, and just because it is Christmas doesn’t mean that the foals won’t keep being born and the breeding season stays in top gear producing horses that we hope will be featuring for Australia within the next 10 years. Christmas for us is busy, busy, busy — but such a nice time.

You can view the entry lists for Wallaby Hill International Horse Trials here.