The use of medicinal cannabis has been in the news for several years and now it’s making its way into the horse world. Are we turning our equine friends into pot addicts? 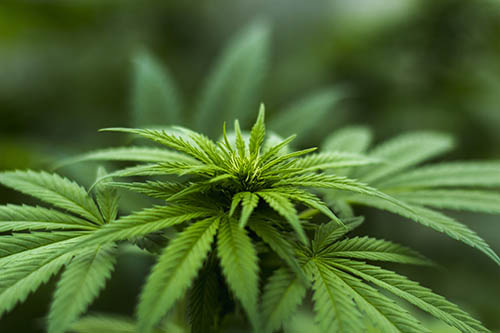 CBD (cannabidiol) is one of a number of phyto cannabinoids found in the cannabis plant.
Click here to find out more about all our sheds and how we can help you

“In horses, medicinal
cannabis has been used for
a multitude of conditions.”

The short answer is no, we are not turning horses into pot addicts — there is science behind the responsible use of cannabidiol (CBD). This article will attempt to demystify fact from fiction that exists in society.

The endocannabinoid system (ECS) is a recently discovered physiological system of receptors and chemical messengers that exists in mammalian bodies at the cellular level and functions to maintain homeostasis in the body. Homeostasis is the term used to describe the body’s ability to maintain itself and its functions within a narrow range despite changes in the environment. It relies on a series of autonomic adjustments and feedback mechanisms that are well co-ordinated and quick to adapt to changes that the body frequently encounters; in other words, it keeps the body balanced.

The maintenance of body core temperature in both hot and cold environments is an example of homeostasis, as is the ability to maintain the correct acid-base level or electrolyte levels in the blood. These ECS receptors are found in most organs in the body, including the brain, lungs, liver, gut, muscles, bones, and reproductive organs, and in association with the vascular and immune systems.

There are different types of receptors and different natural cannabinoids (chemicals produced which attach to the receptor to cause or inhibit an effect) that combine to make this chemical communication network function. The name ECS reflects how the system was discovered; research into how and why cannabis achieved the reactions in the body that are seen with the administration of the drug marijuana.

Marijuana, or cannabis, contains many different phyto cannabinoids, and the one of note is THC (tetrahydrocannabinol), which brings about the alteration in sensory perception, giving people “highs”. But other cannabinoids (such as CBD) have also been identified; these do not bring about the behavioural effects seen with THC, but rather produce the therapeutical traits of analgesia and potent anti-inflammation, which are highly desirable. The production of medicinal cannabis is aimed at formulating a medication that is high in CBDs but low in THC.

In horses, medicinal cannabis has been used for a multitude of conditions, including arthritis, laminitis, anxiety, ulcers, obesity and autoimmune syndromes. There have been few scientifically based research studies into how well CBD works in the horse, with most claims based on anecdotal evidence. For example, cases of horses with osteoarthritis or laminitis that were in extreme pain, and non-responsive to nonsteroidal medications such as phenylbutazone, that showed moderate improvement with daily dosing of medicinal cannabis.

It is a similar scenario in humans, where there have been multiple examples of improvement of clinical signs related to an illness or injury that have not been seen with the use of conventional medications. Further investigation is required into the doses required and the frequency between dosing. 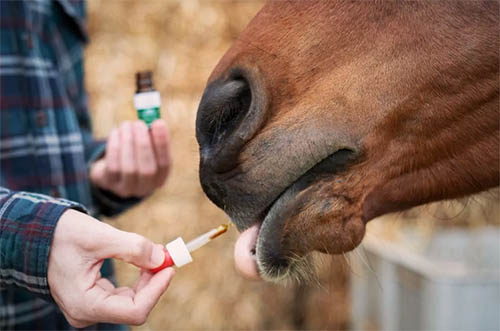 In horses, medicinal cannabis has been used for a multitude of conditions, however to date there have been few scientific research studies.

“There are several ways of
administering the CBD, including
under the tongue, on food,
inhaled and topically.”

Anyone wishing to use the product should ensure they purchase the CBD from a reputable source, checking that the product contains less than 0.3% THC, and minimising the risk of over-contaminants that may be present in the medication. The dose required will depend on the amount of CBD per millilitre in the product, with different commercially available preparations containing different mg/ml. Currently there are several ways of administering the CBD, including under the tongue, on food, inhaled and topically.

As mentioned, there have been few scientifically based research studies into how well CBD works in the horse and further investigation is required into the dosage and frequency of use. In the years to come, it’s quite likely that more in depth research will take place and we’ll then be better placed to understand how CBD can be used to help our equine friends. EQ