Founders of The Billy Stud, William Funnell and Donal Barnwell — friends since they were teenagers — could only have dreamed that their joint venture breeding sport horses would be so successful. 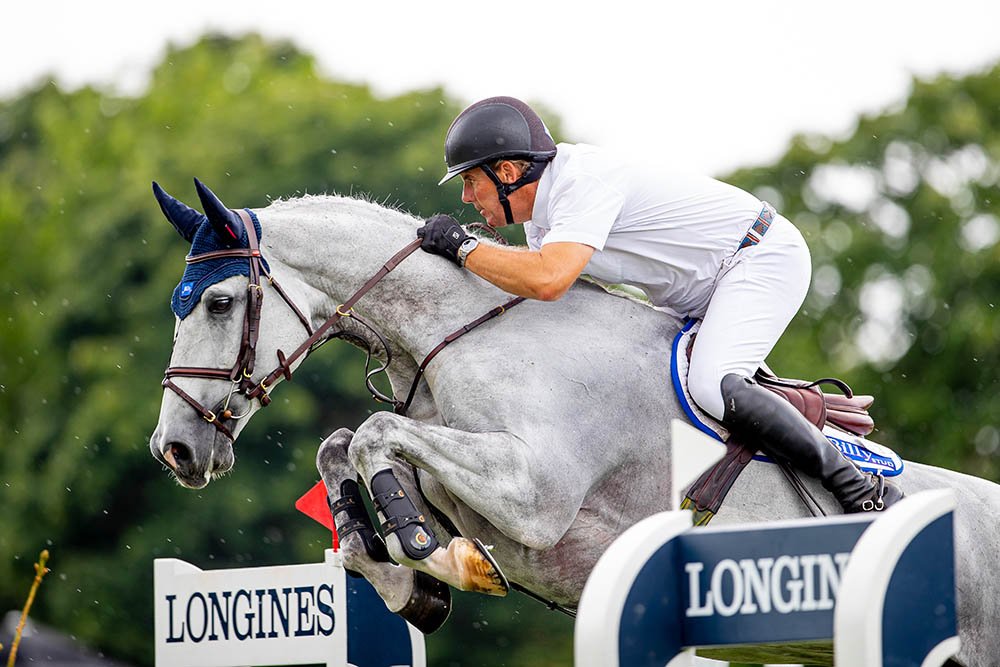 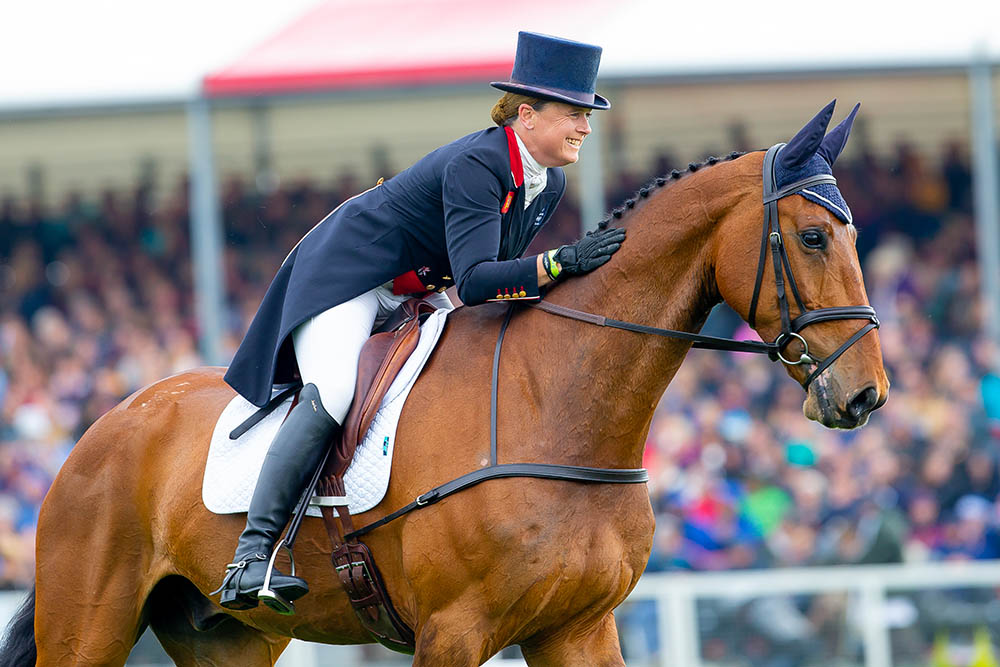 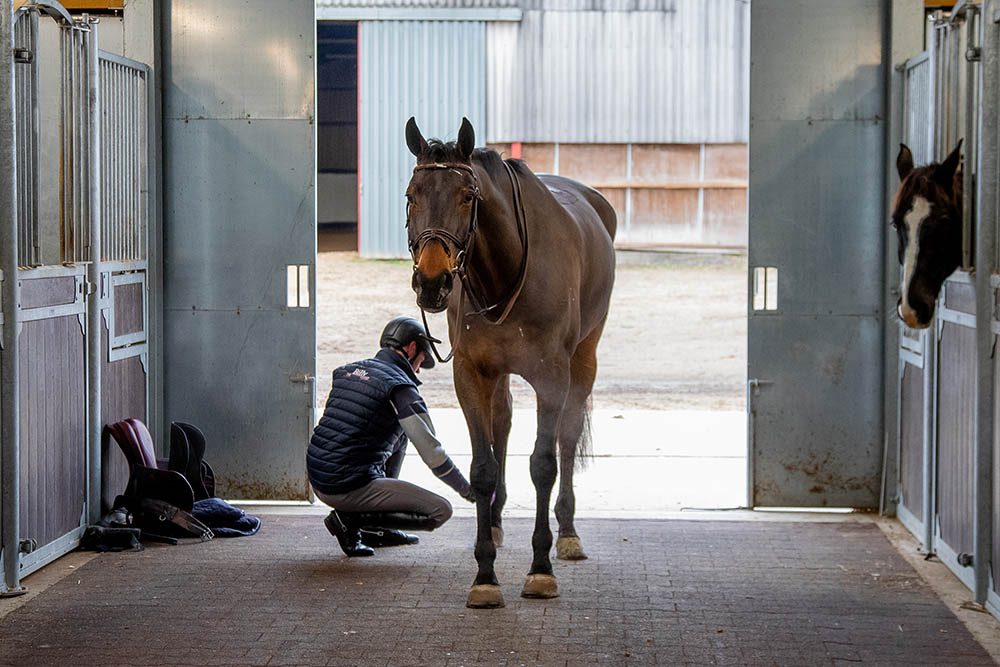 Inside the stable at The Billy Stud. © Elli Birch / Boots & Hooves Photography
Click here to discover what makes ELD arenas the obvious and best choice

“The first Billy foal was

a chestnut colt, which

William has been part of the international showjumping scene for many years; he is a four-time Hickstead Derby winner and has represented Team GB on numerous occasions, starting his showjumping career as an apprentice with Cyril Light of the Brendon Stud in Sussex, (where William and Donal first met) before setting up on his own. The older horses and William are based at Jordans Farm, Forest Green — 56km southwest of London.

Irishman Donal grew up in a farming family in County Wexford and has an incredible eye for a horse, a huge knowledge and great experience with breeding. He is situated in Petworth, about 30km further south from William; his yard is specifically set up to accommodate the mares, foals and young stock.

In the 1990s, Donal and William owned a few jumping horses together, one of which was a talented jumping mare called Tatum, by Irish super sire Clover Hill. Sadly, Tatum had suffered a career-ending injury — however with her great bloodlines she made a perfect broodmare. Tatum was covered by KWPN stallion Animo, owned by William’s friend, Norwegian amateur rider Morten Aasen.

The first Billy foal was a chestnut colt, which Donal named Orange. He kept this name until he arrived at William’s yard as a four-year-old and was then referred to as ‘Billy’, from which his show name was born — Billy Orange. The “Billy” prefix is used to this day and the second part of each horse’s name is taken from the foal’s dam line.

Tatum’s second foal, Autumn, was the dam of the stud’s trailblazing stallion Billy Congo, foaled in 2001. William and Billy Congo enjoyed great success together, taking top honours in many eminent Grand Prix classes around the globe; in addition they were on the winning British 2013 European Gold Medal showjumping team in Denmark.

Billy Congo retired from top-level sport in 2018 and now stands at the Kylemore Stud in Ireland. Billy Congo is renowned for being the sire of many top performers, one of whom was Hickstead Derby-winning and team GB member at the World Equestrian Games 2018, Billy Buckingham, who sadly sustained a life-ending injury earlier this year.

In 2000, Donal and William obtained the Zangersheide Holsteiner stallion, Cevin Z, who has been key to The Billy Stud’s continuing success in producing quality young-stock. Cevin Z passes on his super temperament, conformation and athleticism to his progeny and is sire to many top competition horses, including Billy Mexico now in the USA with Vani Khosla; eventer Billy the Biz, who represented team GB at the Rio Olympics in 2016 with Pippa Funnell; and Billy Diamo, William’s 2021 Olympic showjumping hope.

Over the years, the stud has developed a system that has proved very successful. Donal starts the process with the mares and foals. Overseeing the broodmares when they foal and once weaned, all the foals live in big herds in the most natural of environments. If the weather is very bad they remain in their herds in large barns.

While turned out, they are caught occasionally to be wormed etc. but in general they are left alone to enjoy simply “being horses”. Donal spends a lot of time with the foals, getting them used to being handled in groups and individually before being turned out until they are three-year-olds, when they will be introduced to a head collar again. 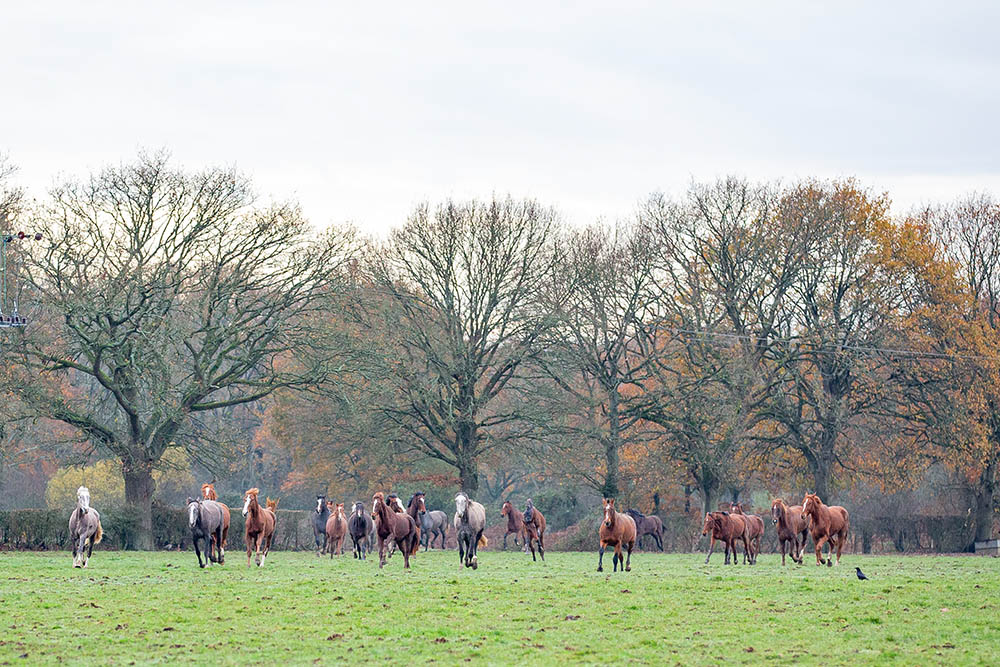 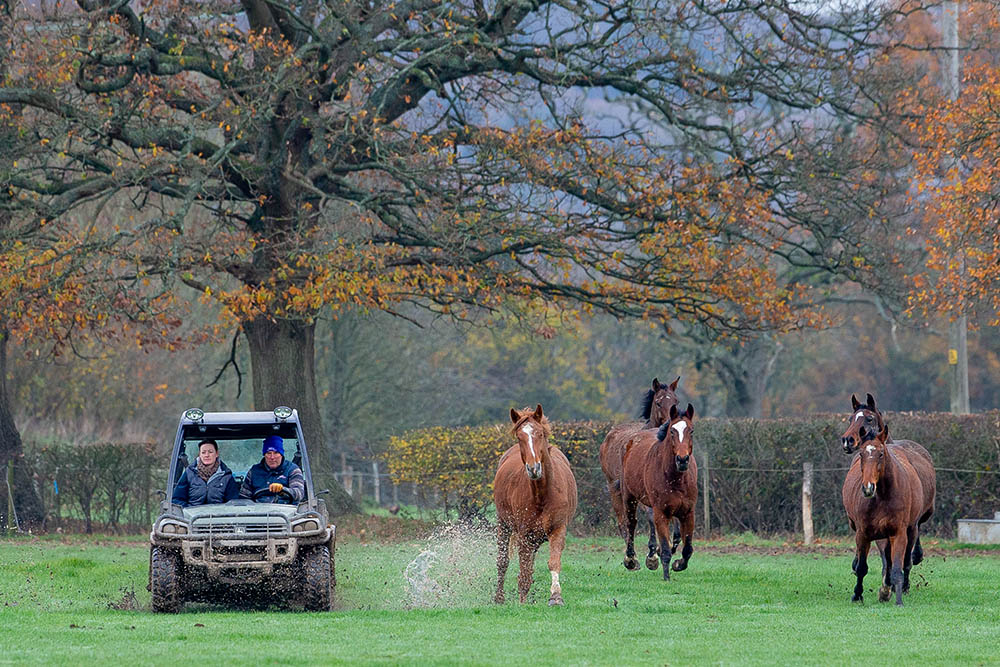 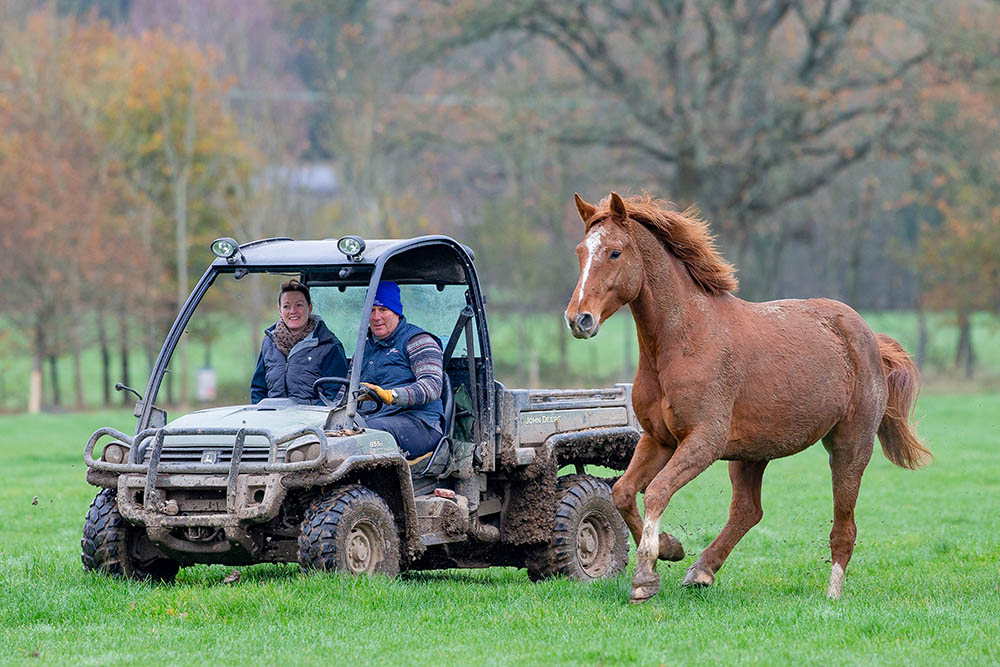 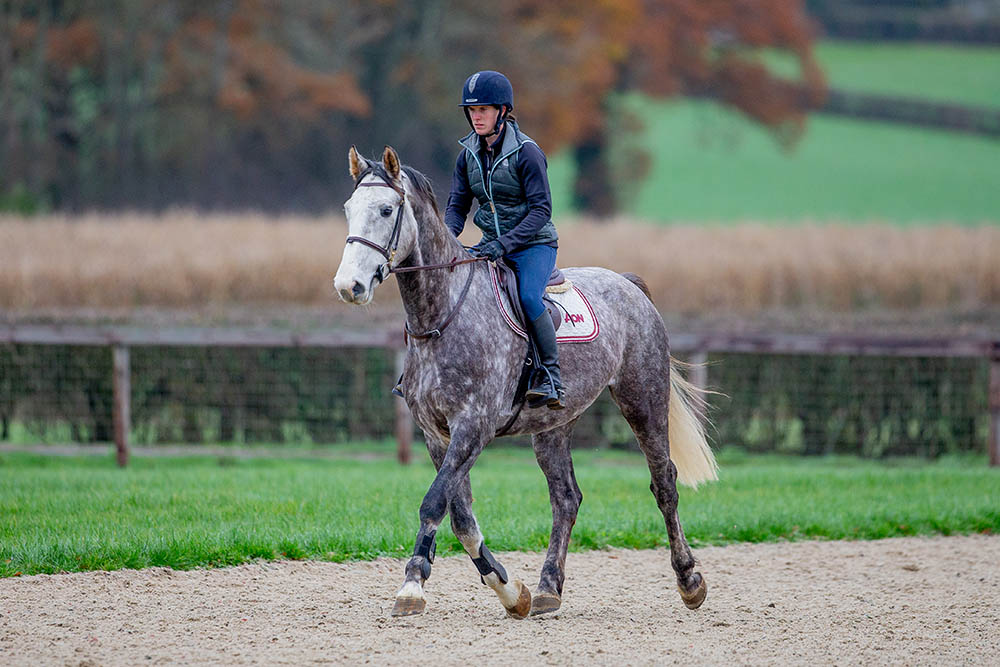 “Billy horses are produced in a
manner that ensures they fulfil
their individual potential.”

In the region of 80 foals are due in 2021, the majority of which are via embryo transfer. ET enables the stud to maximise the production of multiple quality foals in a breeding season and, as a consequence the sport horse mares continue their competition careers. The most ET foals in one season at The Billy Stud has been seven from one mare.

As three-year-olds, the horses go to Will Plunkett who backs and breaks all the Billy babies. William believes that when you have quality raw material to work with, consistency and a determination to get it right from the start, bad habits are not learned. All the Billy horses are produced in a manner that ensures they fulfil their individual potential and become the best horse that they can be. William feels that often bad habits occur as a reaction to poor knowledge and training as youngsters. William likes to keep things simple if he can; a snaffle mouth and simple noseband are always preferable, when possible.

Once broken, the three-year-olds arrive at William’s yard able to be lunged and ridden at walk, trot and canter on each rein. They are once again turned away, living the herd life until they reach their fourth year. As four-year-olds they continue their education with the hugely experienced and accomplished Sue Greenaway, who has a wonderful, quiet, yet firm way with the youngsters. After Sue has educated and built the solid foundation upon which all Billy horses’ careers are based, William’s team of riders can take over the reins. 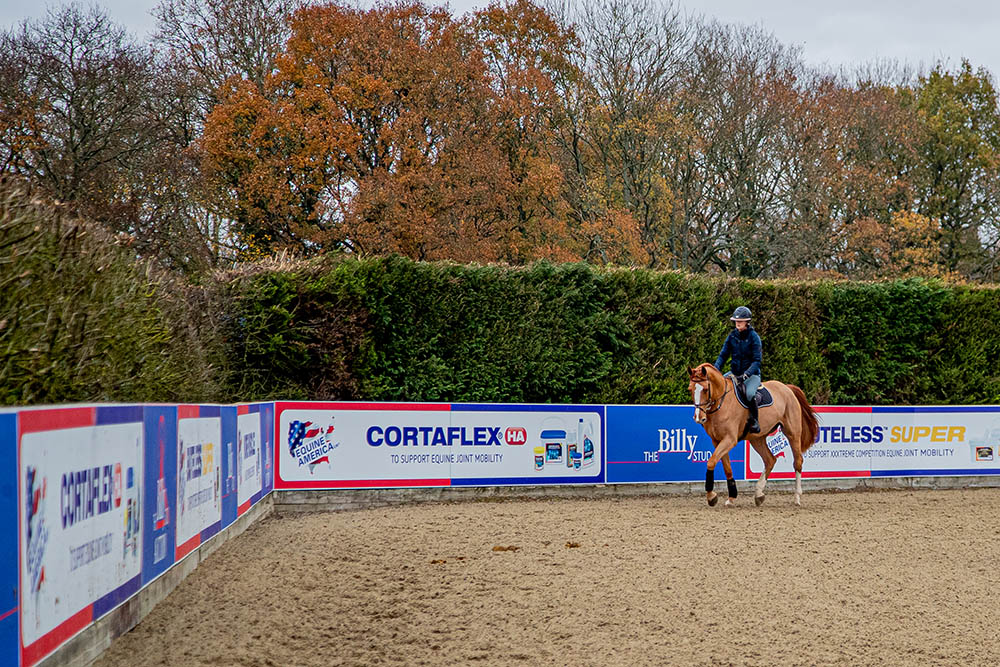 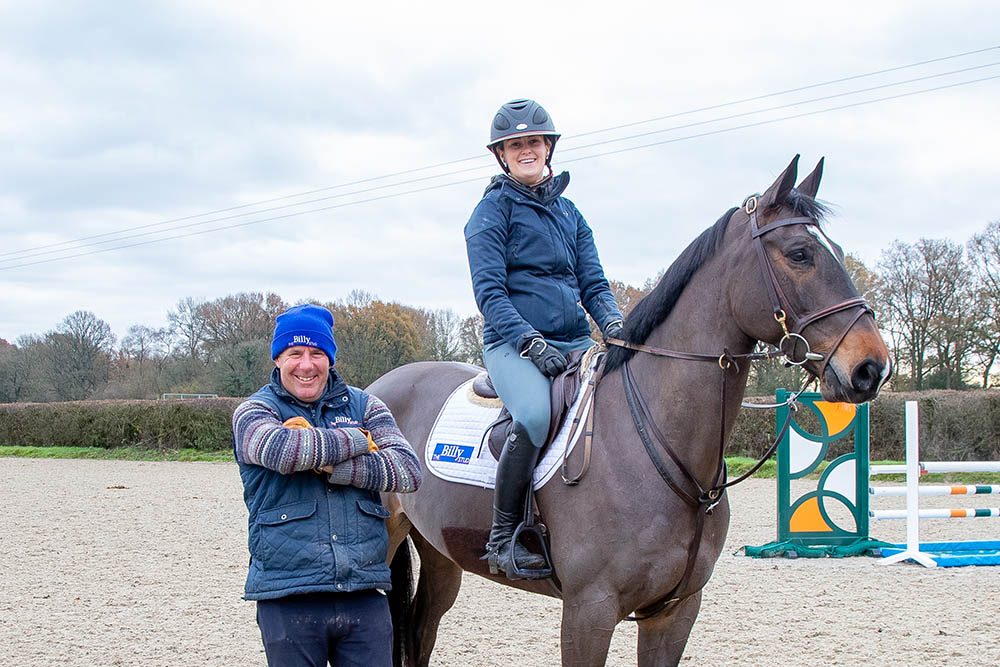 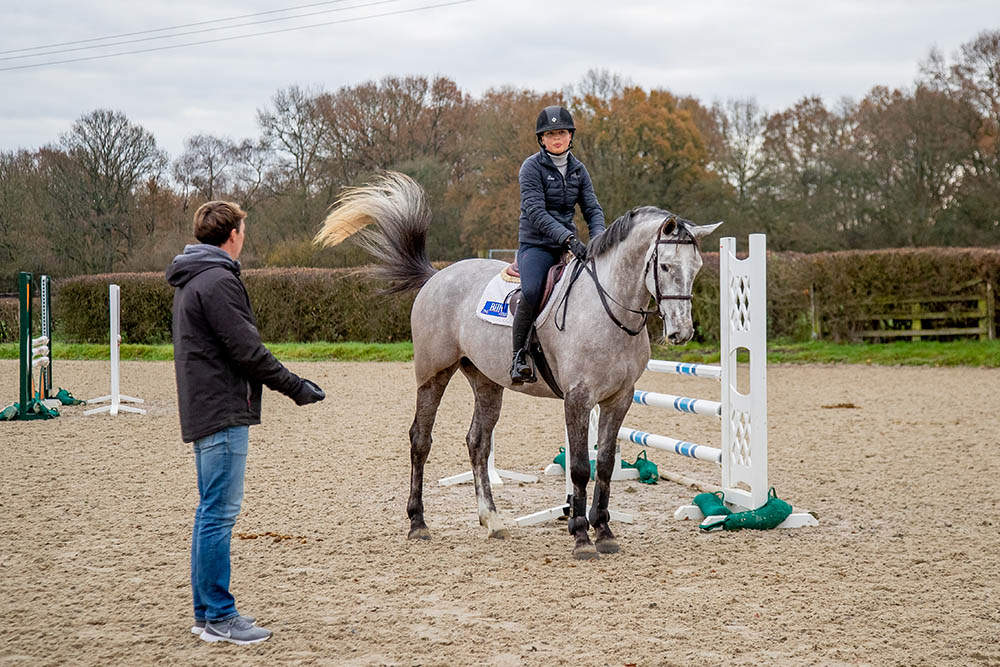 This is when the horses start their introduction to jumping under the sharp-eyed tutelage of The Billy Stud manager Roger McCrea. It may be that some horses are more suited to eventing and therefore continue their education with William’s wife, eventing luminary Pippa Funnell, while the showjumpers stay with William.

I was introduced to some of the four-legged stars of the yard, including 12-year-old Billy McCain (Cevin Z) and the 10-year-old Billy Diamo (Billy Congo). Super groom Zoe Herbert cares for William’s horses and it was clear that all her charges love her, whickering, snorting and vying for her attention over their doors as we walked past. Hickstead seven-year-old champion Billy Marmite was still looking hairy, having just been brought in from his field holiday after his big win in September. All the horses are given plenty of downtime; at The Billy Stud they have their eye on the long game, as there is no point in needlessly rushing a young horse’s education.

The stud’s extensive facilities include a huge manège, which boasts a full course of show jumps. Lucy Townley (granddaughter of Hickstead founder Douglas Bunn) rides for William, producing the young horses; her husband Ben Townley is a Level 5 (advanced) course builder, so they always have a good course to school over at home! This proved invaluable in 2020 when so many shows were cancelled in the UK and Europe due to the Covid-19 pandemic.

I watched four-year-old stallion Billy Toto (by Billy Mexico and out of Loulou — ridden by the late Tim Stockdale), having a jump with stable jockey Lottie Tutt; Toto is definitely one to watch for the future, displaying so much scope and bundles of presence. Interestingly, no Billy horses are jumped in the ring until they are five (with the exception of the stallions), as William does not believe in hurrying their preparation for competition life. 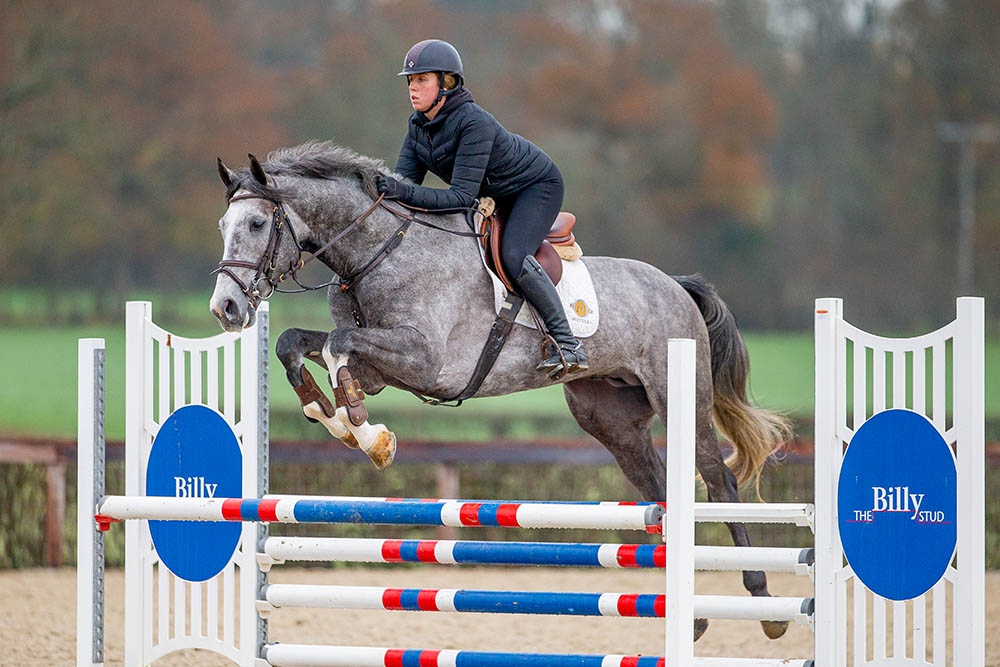 Lottie Tutt and the five year old Billy Toto. One to watch for the future! © Elli Birch / Boots & Hooves Photography

The highlight of the day was watching William and Christine McCrea feed the horses that were turned out in the stud’s numerous acres of grassland. Everywhere I looked I saw happy, hairy, healthy, mud-coated horses peeking over hedges and observing our arrival with great interest. A melee of three-year-olds welcomed William as Christine drove him through the fields; all the horses knew the drill and followed eagerly as William poured hard food into a number of troughs.

The Billy Stud prides itself on breeding and producing high quality sport horses. William believes that horses must have good manners and always have to respond unquestioningly to what is asked of them, whether it is cantering a circle, being led to the field, or jumping a 1.60m oxer. Consistency and trust are key factors when training horses, and for this reason William has built a talented team at The Billy Stud, whose expertise at every level is exceptional. Subsequently, he does not have to oversee them every step of the way.

Husband and wife team Roger and Christine McCrea joined The Billy Stud in 2018 and have become integral to its success. Roger manages the horses, riders and training, while Christine organises the online auctions, of which there will be four in 2021. Currently there is an international flavour at the stud as they host riders from Australia (Amelia Douglass), Norway (Lisa Holmsen) and Ireland (Jack Treasaigh), all of whom are in the enviable position of being trained on super, young horses by some of the most experienced people in the business — William, Pippa and Roger. 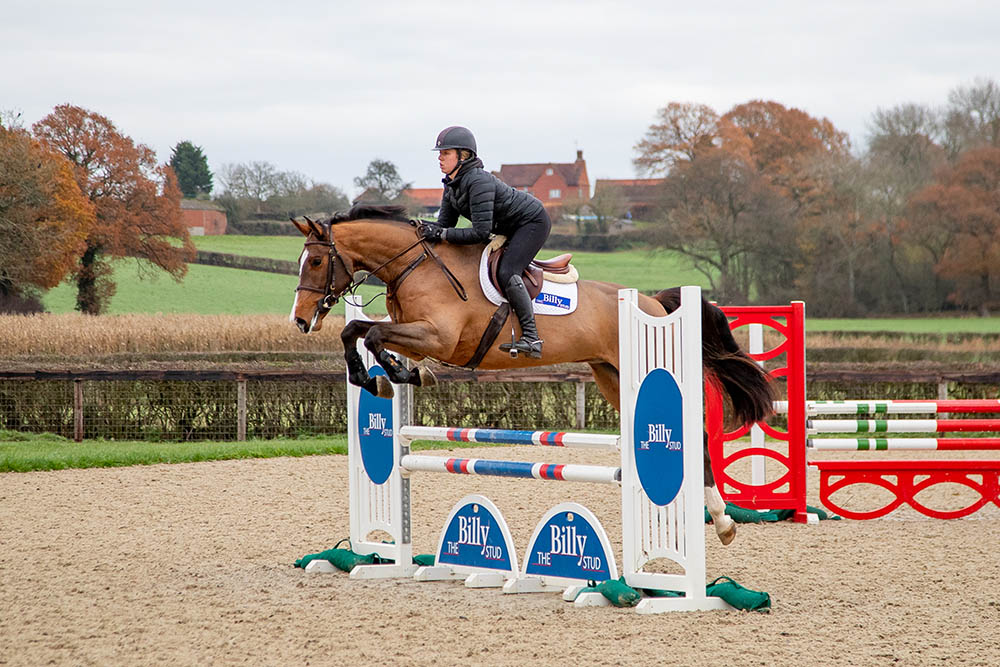 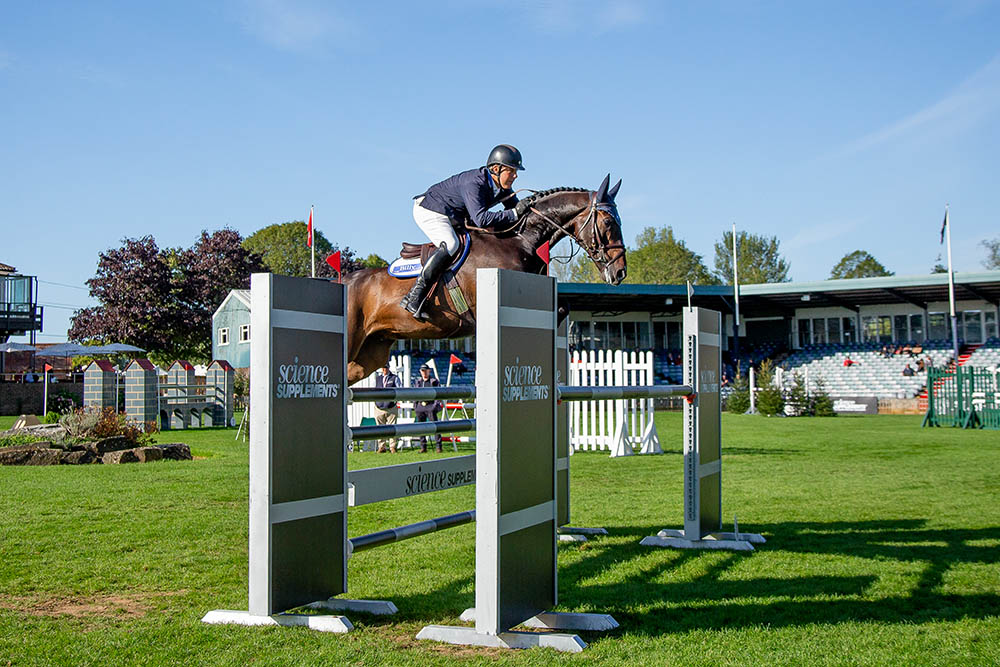 William Funnell and Billy Marmite on their way to winning The Al Shir’aa All England Seven Year Old Championship at The All England Jumping Course, 2020. © Elli Birch / Boots & Hooves Photography 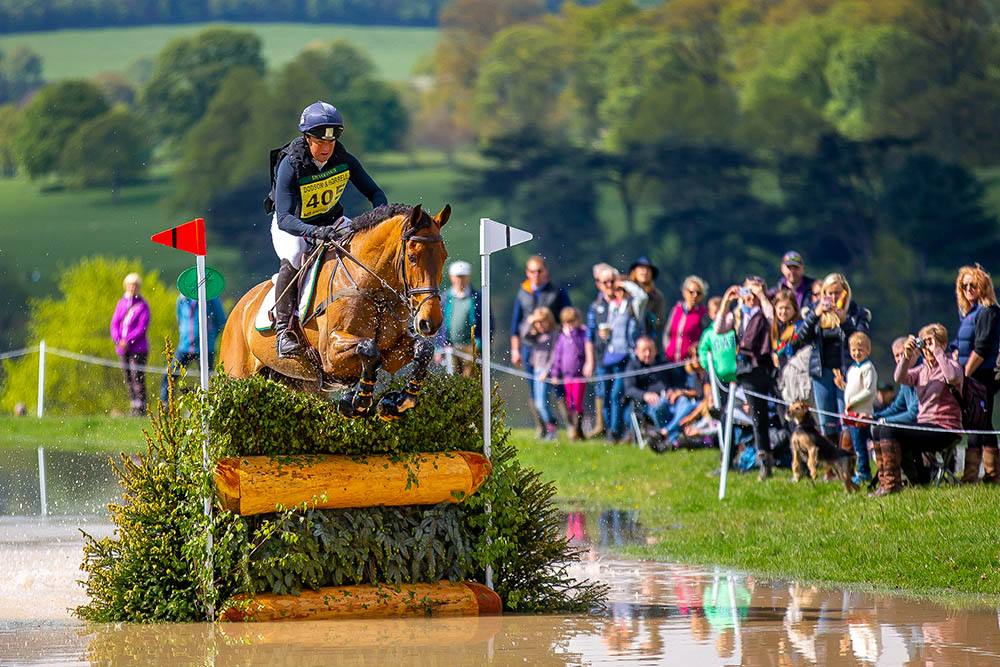 “The end game is always to create

a showstopper of a sport horse.”

In line with the world at large, The Billy Stud has become more and more “e-savvy”. As well as holding successful online auctions they are building up a loyal social media following, even coining their own hashtag — #everyoneneedsabilly!

While the entire world was put on pause in 2020, The Billy Stud held five online auctions, which were a huge success; a variety of horses were sold, not just young-stock. All horses in the auctions are X-rayed and must pass a five-stage vetting in advance of the auction. In the interest of complete transparency, all are viewable by potential buyers. Ultimately, The Billy Stud is in the process of growing a global brand as the producer of high-calibre sport horses and every day their already fine reputation grows.

High profile buyers at the auctions have included Olympic champion Nick Skelton, who purchased a 2015 mare, Billy Bilboa (Cevin Z), in autumn 2019. Billy Bilboa continued her education at the stud and went on to win the Hickstead five-year-old championship in the capable hands of stable jockey Lottie Tutt in September 2020. The talented mare has subsequently been sold by Nick to a young Irish rider and certainly has the making of a good Grand Prix horse.

There is no doubt when talking to William that he is enormously proud and passionate about the flourishing breeding program that he and Donal have developed over the last 25 years. There is a Billy to suit most pockets, whether you are looking for your next GP horse or a good amateur’s horse, you can be sure that they have had the best start in life to stand them in good stead for their competition career.

The combination of using top quality mares with Irish bloodlines and European stallions is the basic recipe for success at The Billy Stud. Many other ingredients are added throughout the production of each horse, however, the end game is always to create a showstopper of a sport horse. EQ