Queenslander Kelly Layne and a new horse called Samhitas are making their mark on the dressage circuit in Florida. The Oldenburger gelding just might be the one to give Kelly a second shot at the Olympics. 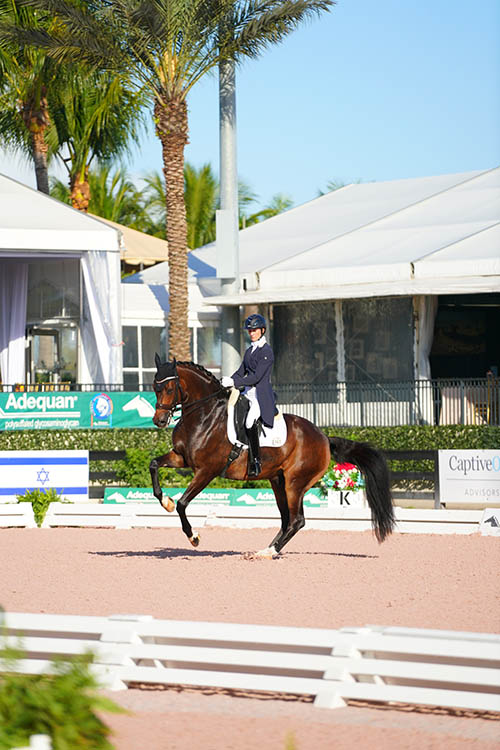 Although lightly competed, Samhitas is proving to have considerable talent. © Satomi Ishikuri
Click here to learn more about KERs products

“The GDF typically offers
an incredible seven CDIs in
the space of 12 weeks.”

Based in the equine heartland of Wellington, Florida, for close to nine years, Australian dressage rider Kelly Layne has built a successful business surrounded by her close-knit team. Their newest addition, a horse named Samhitas, is turning heads on the Global Dressage Festival circuit. Could this be the next name to appear on Australia’s Olympic selection radar?

Kelly Layne is no stranger to the international stage. As a young rider, she competed in New Zealand and Hong Kong, before going on to represent Australia at the 2006 World Equestrian Games in Aachen, Germany, and later winning the Hermes’ Cup Small Tour championship at the Tokyo CDI3* in 2013.

Over the years, she has notched up numerous wins at CDIs in the United States and competed multiple horses at Grand Prix level with success. With her superstar Udon P, she was nominated for the 2016 Rio Olympic Games, however, complications stemming from a recurring injury meant she ultimately decided to withdraw.

For the past nine years, Kelly has rented stables at Palm Beach Equine Sports Complex in Wellington, Florida, a region known for its plethora of equestrian facilities and events.

“We started out with four stables and have gradually grown the business; we now rent 16,” explains Kelly. The complex is extensive, providing tenants with everything they need to coach, train and ride at the highest level. “Palm Beach Equine Sports Complex has over 300 stables on 50 acres. There are three dressage arenas with mirrors, one covered, three jumping arenas and a three-quarter mile track. We also have a vet clinic with 28 veterinarians, an MRI machine, CT scanner and the best surgical team in the USA. Grand Prix feeds is also on the premises for hay, feed and shavings, straw, supplements and grooming supplies, plus there are many tack shops within a five-minute drive.”

The complex is located in the heart of Wellington’s equestrian hub. Palm Beach International Equestrian Centre is just down the road, and events such as the Winter Equestrian Festival (WEF) for show jumpers and Global Dressage Festival (GDF) are just a six-minute hack. From January to March, both WEF and GDF concurrently run their winter events that attract competitors from around the globe with a plethora of competitions to choose from and very lucrative prizemoney on offer. The GDF typically offers an incredible seven CDIs in the space of 12 weeks, and the venue hosts as many as nine per year with additional competitions such as the Fall Series.

“We are a six-minute hack to the warm-up on the Global showgrounds,” says Kelly. The close proximity to elite level competition is a huge upside to life in Wellington; alongside access to nine CDIs in a year with virtually no travel, Kelly says equine enthusiasts could watch world-class show jumping or polo just about every weekend. Over the winter months in particular, it’s the place to be.

“Many top trainers and judges from Europe are here in the winter. There are about 100 dressage horses at our barn in the winter (the rest are jumpers). In recent years at least nine of those horses have been competing in the CDI Grand Prix. I think surrounding yourself with this level of training and competition drives and motivates you to a higher standard. This has always been my motto.”

Kelly explains that the weather in Wellington is not dissimilar to her home state of Queensland; summer in Wellington is very hot and humid. Despite three months of unbearably hot weather (July, August and September), Kelly says she’d take it any day over a winter anywhere else in the northern hemisphere, except perhaps San Diego! “We have three months of very hot weather, but we also have seven months of the best weather imaginable for training horses… and then two months that have heavy rain and lightning. If there is a hurricane coming for us, we just pack up and leave. Last time we went to Tryon for two weeks and it was a fun vacation!” 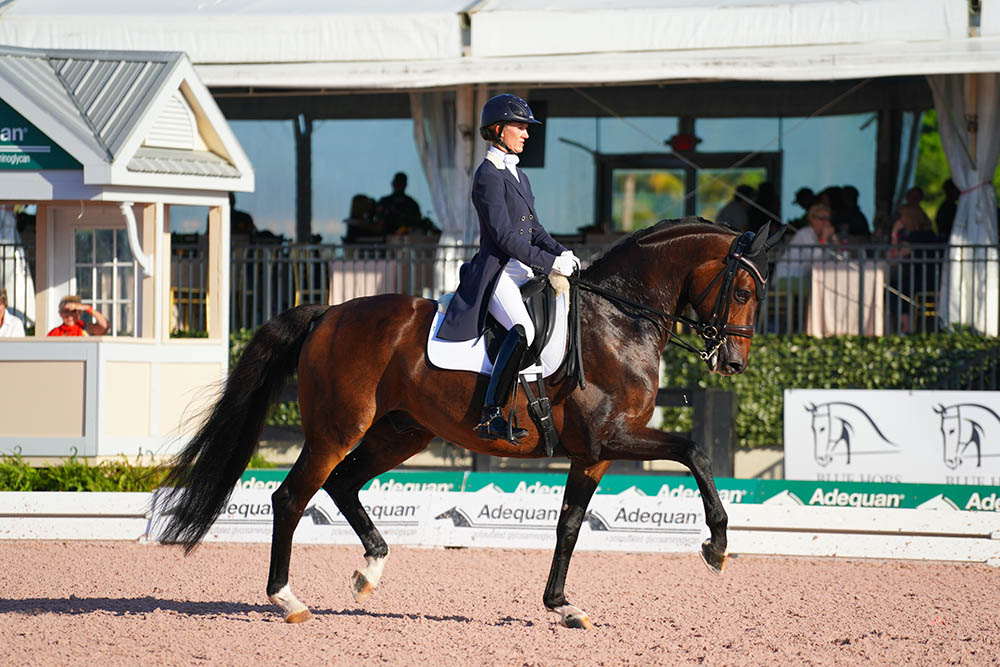 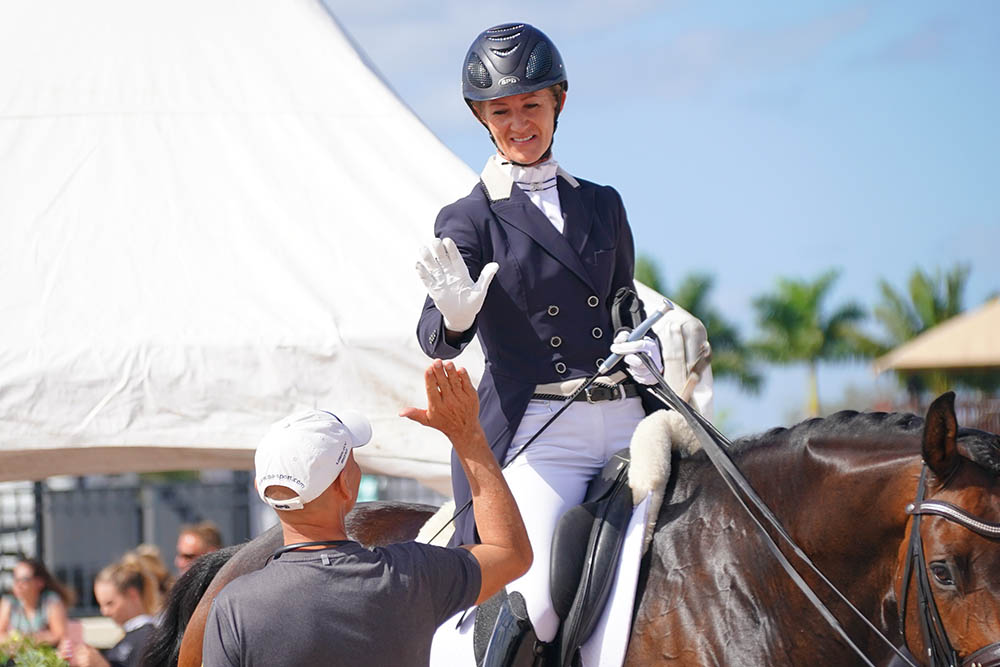 Kelly is all smiles after a great test with Samhitas. © Satomi Ishikuri 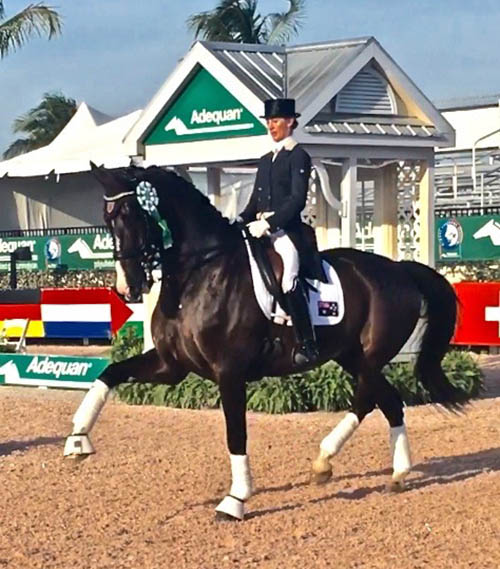 Kelly riding the late Udon P, who passed away suddenly towards the end of 2020.

“Noodles took us on an
incredible journey and he introduced
us to forever friends.”

Kelly has had numerous Grand Prix horses over the years, including the beautiful Udon P with whom she came so close to competing at an Olympics with. In the last couple of years, ‘Noodles’ had been a wonderful schoolmaster for Anne Barrett, remaining in Kelly’s stable and sticking to a work routine that he so loved. In October, a heart arrhythmia — which he’d been successfully treated for earlier in his career — returned, this time proving fatal. Kelly and all who knew the horse were left heartbroken.

“Noodles took us on an incredible journey and he introduced us to forever friends. His huge personality was one of a kind and we are still coming to terms with his absence from the barn. Most people can relate to losing a great horse and friend, but this horse changed us forever. He was a funny horse and very predictable. His enthusiasm for working was like no other horse I have ever met. He was a great communicator — you only had to listen,” she recalls.

Since Udon P, Kelly has had a number of other horses at international level — however, it’s the most recent one that is really turning heads. Samhitas, an 11-year-old Oldenburger gelding by Sir Donnerhall out of Heidebluete (Abanos), was bred in Germany by Annette Engel and Andreas Wempe and is now jointly owned by Kelly Layne and Nori Maezawa.

Although Kelly and Nori only purchased him two years ago, Kelly had known the horse for many years prior. “Samhitas was originally bought by Gary and Jean Vander Ploeg at the Oldenburg auction as a three-year-old in 2012. I have known him since he was five years old (2014). My friend Endel Ots (who was based at Palm Beach Equine Sport Complex) had him in training and took him to the World Young Horse Championships as a six-year-old in 2015 before competing him to Small Tour.” Endel trained the horse to Grand Prix level, so Gary and Jean could then sell him on to an international rider.” 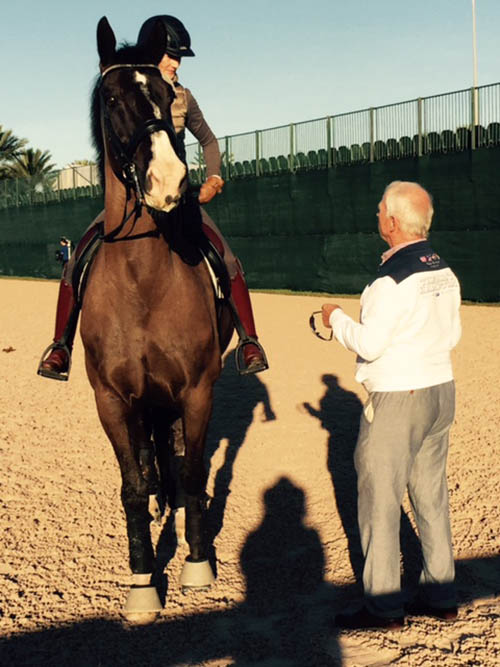 “His feet hardly touch
the ground. It’s like floating.”

Kelly rode Samhitas on occasion while he was with Endel, and recognised that she had a connection with the horse. “When he was offered for sale I took several buyers to try him, but nothing eventuated until January 2019.”

Kelly debuted Samhitas at Grand Prix level at Tryon late 2019, before competing at a number of CDIs during the 2020 Global Dressage Festival with promising results — scoring as high as 66.696% in the Grand Prix, 69.936% in the Special, and 72.625% in the Freestyle.

“When I got Samhitas he had only done eight tests in his whole life and was very green when it came to competition experience at the age of 10 years. Last season I was trying to show Grand Prix on a horse that felt like a four-year-old at his first shows! He has the ability to score 8s and 9s; this is very exciting and takes the pressure off the odd mistake here and there.”

In November 2020, the pair competed at the Global Dressage Fall Festival, scoring a personal best of 67.652% in the CDI3* Grand Prix and 72.090% in the Freestyle, finishing second in both classes.

“Samhitas is a dancer; he makes dressage look like ballet. His feet hardly touch the ground. It’s like floating. He is a ‘trotter’ for sure and that works perfectly for me. I am a canter rider and I need a horse with a naturally spectacular trot. Samhitas, or ‘Siggy’ as we call him, is always trying his best; he is a little bit lazy but easily excitable. It’s an interesting combination.

“He is always evolving and I’m sure I will look back at this interview in 12 months and feel totally different about him. But one thing I know for sure is that I believe in him 100%. He is my Seabiscuit. We joke about him because he likes to sleep all day in his stable. Sleeping or eating. That’s it!” 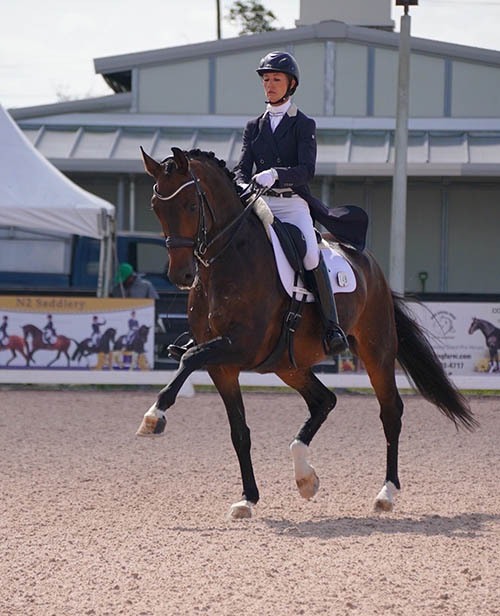 Kelly explains that Samhitas is particularly talented in the trot work. © Satomi Ishikuri

When it comes to elite level dressage, the talent of the horse and rider is only part of the puzzle; there are other pieces required that lead to success, and a big piece is the team that a combination has around them. Kelly explains that she doesn’t have a major sponsor, but instead is surrounded by a group of passionate people.

“I am really spoilt when it comes to my team. The best grooms, the best vets and farriers, my husband, my Mum and my clients are all so supportive. It is a mindset. We are like-minded people who love horses; it’s an investment in the future, and it’s a passion. I can’t describe it another way. This entire city of Wellington, including all the people competing at this level, their owners and supporters… I can hardly describe the dynamics of this place. Many people talk about it, but here you see the true reality.”

Kelly is excited for the future with Samhitas, and with such a fabulous team around her that future is no doubt bright. Could another Olympic nomination be on the cards? With the Global Dressage Festival about to kick off in Wellington, there will be many watching with interest. For Kelly, it’s (literally) another ride down the road, and for now she is just focused on the journey rather than the destination. “We work hard with passionate people and the horses are the stars of this show. Who knows where this will take us!” EQ