BONEO BIG TOUR LEAVES PLENTY TO BE EXCITED ABOUT

MAKE THE MOST OF YOUR SENIORITY

A GODSEND FOR THE CONNEMARA

FROM AUSTRIA WITH LOVE, THE GOLDEN HORSE

THE ORPHAN HORSES OF PAYNES CROSSING

WITH RACHAEL CLARKE
content placeholder
A Connemara pony at Kylemore Abbey.
Previous
Next

Emerging from Ireland’s rugged and remote west, the Connemara is today a popular performance pony around the world. Historic Kylemore Abbey has begun showcasing the breed on the moors where it all began. 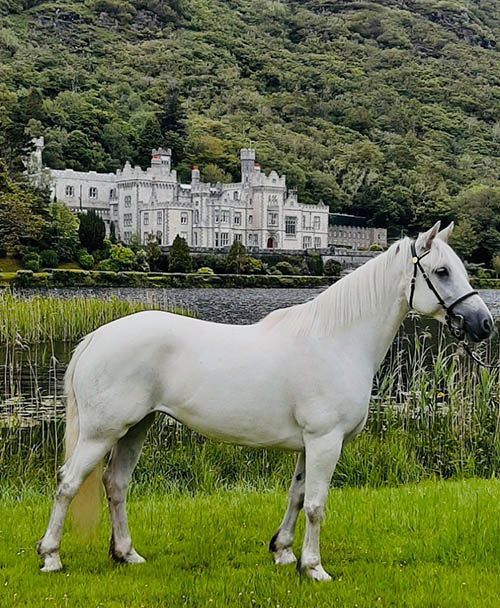 A Connemara pony stands in front of the beautiful Kylemore Castle and Pollacapall Lough.
Click here to view the full Kohnkes Own range.

“Peaceful Paschal was to be
the first-ever Connemara born
at Kylemore Abbey.”

Developed from ponies belonging to Vikings, descendants of a now-extinct pony dating back over 700 years, or a chance result of a 16th century Spanish shipwreck? The exact lineage of the Connemara pony may be hazy, but the breed’s Irish roots are crystal clear — as is its reputation for athleticism, versatility and hardiness.

Considered Ireland’s only native pony breed, the Connemara was first recognised as a distinct type in the Connemara region of County Galway in western Ireland. Arabian blood was added to local pony stock in the 1700s, and they were also commonly crossed with thoroughbreds and hackneys. Some feared that the bloodlines were at risk of becoming too diluted, and so the Connemara Pony Breeders’ Society was founded in 1923 and a studbook established in 1926. The Connemara pony has since become a popular breed around the world and is bred in many countries, including Australia — however, the name will always be synonymous with Ireland.

Built in the late 1800s by Mitchell Henry MP, a wealthy businessman and liberal politician, Kylemore Abbey showcases what can be achieved in the remote wilds of Connemara. Inspired by his love for his wife, Margaret, and his hopes for his beloved Ireland, Henry created an estate boasting “all the innovations of the modern age”. An enlightened landlord and vocal advocate of the Irish people, he poured his life’s energy into creating the estate. Horses played an important role in everyday life for Mitchell Henry and his family, as in those days they were used to work the land and as a means of transport.

Since 1920, Kylemore Abbey has been owned and run by the Benedictine community, with nuns fleeing Belgium during the First World War taking up residence. For over a century they have been a force for social good in Ireland, developing Kylemore as a girls’ boarding and day school, which saw 3,000 students pass through its doors before closing in 2010. The impressive castle and surrounding walled garden, set on a 1,000-acre estate on the edge of Pollacapall Lough, captivated more than half a million tourists from around the world each year before the global pandemic struck.

HORSES RETURN TO THE ABBEY

Early last year, the Abbey welcomed an exciting new addition. Connemara broodmare Fern gave birth to a beautiful, strong colt; he was named Peaceful Paschal to symbolise rebirth and renewal. Peaceful Paschal was to be the first-ever Connemara born at Kylemore Abbey.

The addition of a Connemara herd to the estate is not just fitting due to the fact it is in the region where the breed was first developed; the name of the lough (lake), Pollacapall (Poll a Capall), comes from a legend and means “place of the horse”. A legend popular among children, it tells of a beautiful white horse that rises from the lake in front of the Abbey every seven years. In 2011, some staff members at Kylemore Abbey were almost certain they had seen the legendary white horse when on a windy day, the gusts whipped up the water into wispy white clouds that raced back and forth across the lake’s surface. One could easily imagine this was a beautiful white horse racing to and fro!

The birth of Peaceful Paschal came about as the result of a vision from Kylemore Abbey’s executive director, Conor Coyne. Assuming the role in early 2019, he now leads the Kylemore Trust, a non-profit organisation and registered charity that operates and manages Kylemore Abbey and the Victorian Walled Gardens. 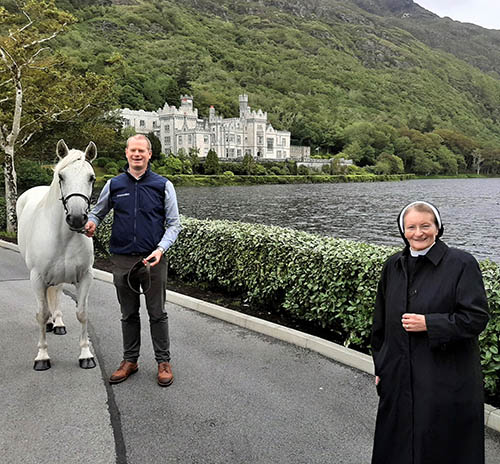 Conor Coyne and Sr. Magdalena, with Kylemore Castle and Pollacapall Lough in the background. 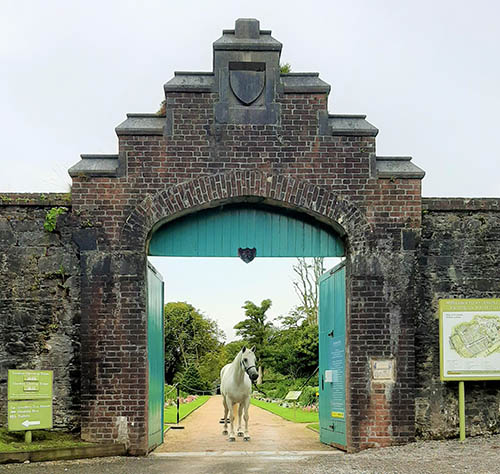 A Connemara pony stands at the gates to the Victorian Walled Garden at Kylemore Abbey. 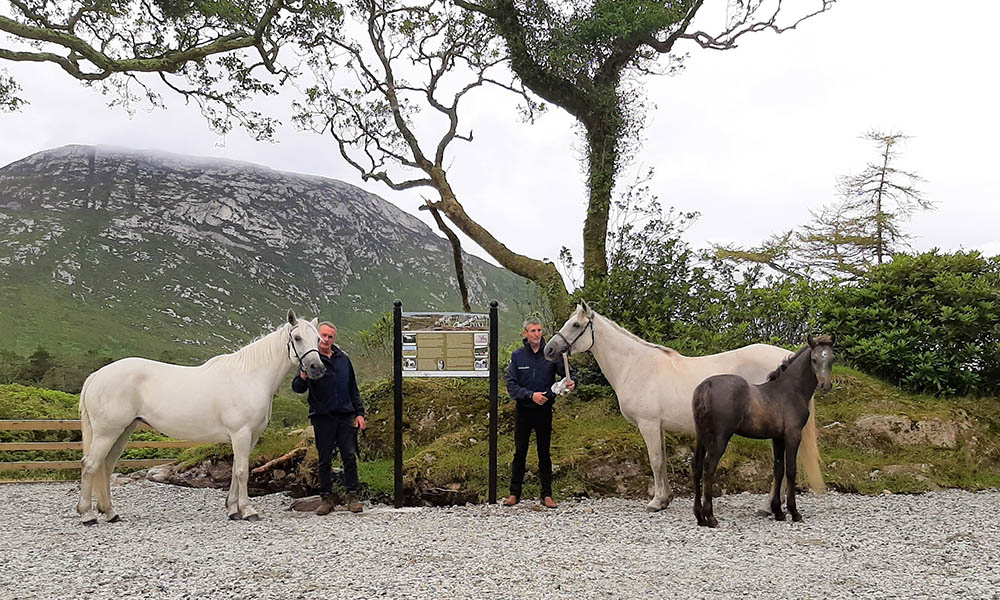 The entrance to the pony paddock at Kylemore Abbey. 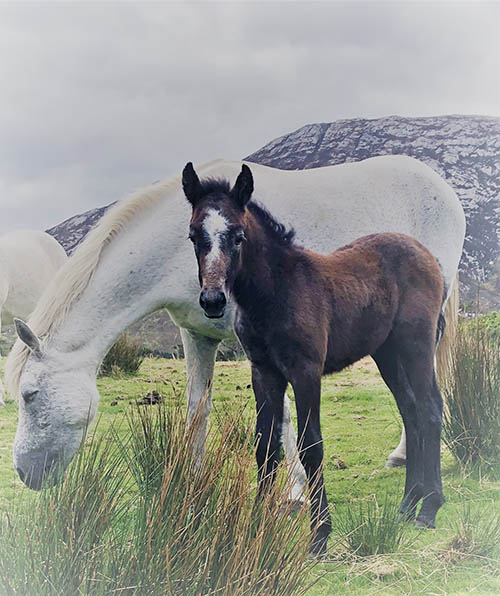 “The Kylemore herd
is from quality stock.”

“The objective at Kylemore Abbey is to showcase the very best of the west of Ireland, and the Connemara pony definitely fits the bill. Hopefully, we whet the appetite of visitors to learn more and develop a greater interest in our much-loved native animal,” says Conor.

Since the addition of Fern and Peaceful Paschal, the estate is now home to a variety of ponies on the estate, demonstrating the various attributes and characteristics of the breed — including some with performance bloodlines, and traditional type mares with bone and substance. Of course, all possess that pleasant character that makes the Connemara pony suitable for adults and children alike.

Conor explains that the Kylemore herd is from quality stock, with broodmares going back to the famous Village, Canal and Lehid lines. Sires include Dexter Leam Pondi, Coosheen Stormboy, Cashelbay Prince, Gwennic de Goariva, Lehid Canal Prince, Dooneen Supermatch and Bay Shadow. In 2020, the breeding programme produced three foals, and they have four mares scanned in foal for this year. In the future, Kylemore is committed to further developing their programme — the prefix for which is “Peaceful”.

There is a team of Connemara pony enthusiasts on Kylemore’s staff that keeps a watchful eye on the ponies and shares responsibility for their management and progress. Alongside Conor, there is Padraic Kenny and John Nee (estate management team), and Niamh Philbin (executive assistant) — all of whom have vast experience and heritage in the breed.

With Covid-19 lockdowns providing the Abbey with a bit of downtime, staff have had the chance to develop the new Kylemore Paddock, which provides a platform for Connemara ponies in their natural surroundings. A special paddock has recently been developed where sightseers can look at the mares and foals with the stunning Diamond Hill providing a fitting backdrop for the perfect photo opportunity. The ponies live outdoors in their natural surroundings all year round. These lucky ponies get to enjoy spectacular views of the Connemara landscape while grazing in sheltered fields on the estate that have been meticulously maintained by the Benedictine community. Not a bad existence!

Since their arrival at Kylemore Abbey in 2019, the ponies have attracted a huge number of admirers. Visitors delight in seeing these friendly ponies pop their heads over the fence as they enjoy lunch outside the Garden Tea House. 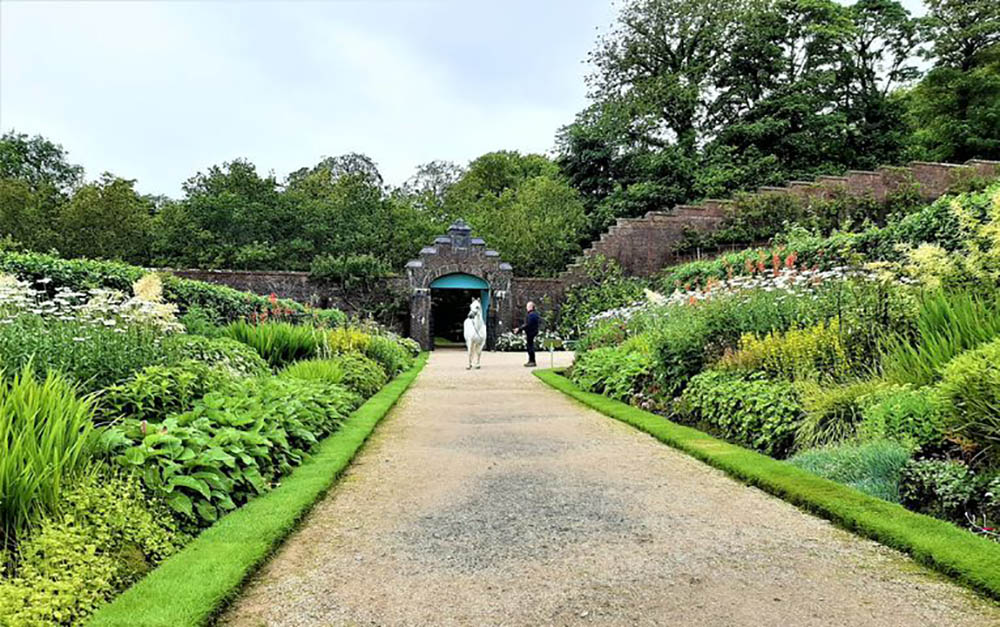 The stunning Victorian Walled Garden is one of the main tourist attractions at Kylemore Abbey. 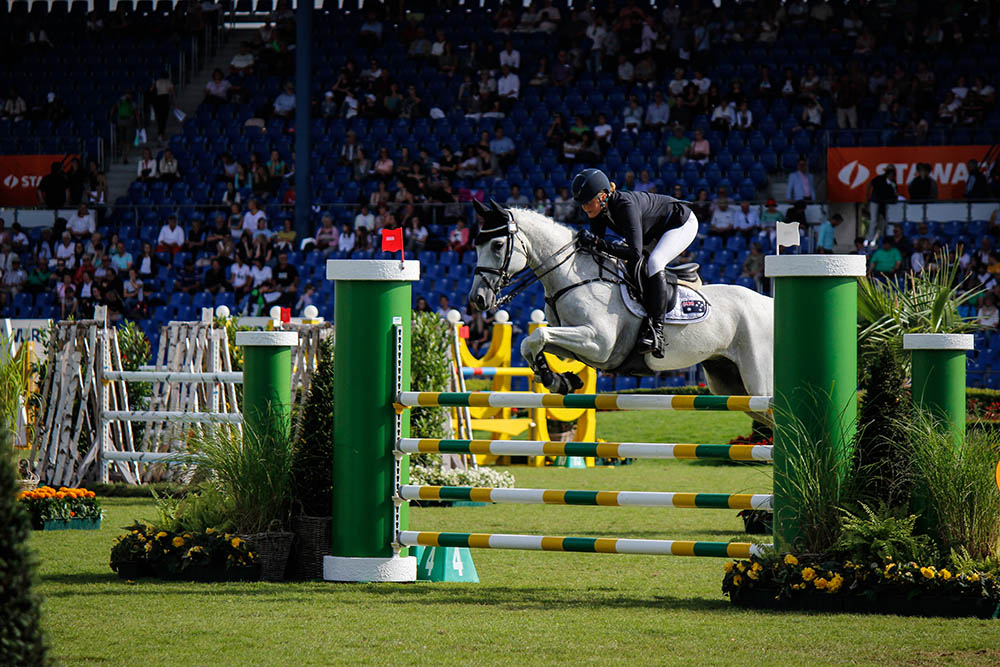 Australian five-star eventing combination, Isabel English and Feldale Mouse. Mouse is by a Connemara stallion, Domo Cavallo Praize, who is a descendant of Island King (the first Connemara imported to Australia in 1963). © EQ Life 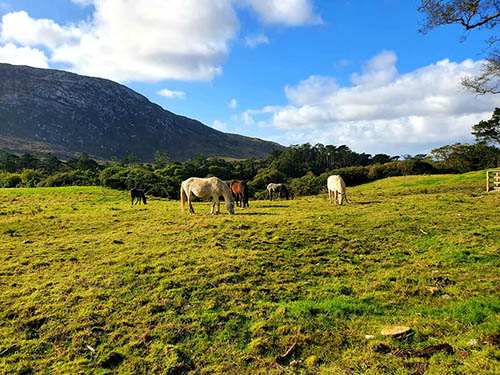 The Kylemore Connemaras enjoye scenic vistas from their paddock at Kylemore Abbey.

“The ponies live outdoors
in their natural surroundings
all year round.”

“The vast majority of visitors would have little or no knowledge of this special breed. The CPBS (Connemara Pony Breeders’ Society) had the foresight to provide information signage to us, which tells the history and background of the Connemara pony to all who visit the newly established paddock adjoining our Victorian Walled Gardens,” says Conor.

Kylemore Abbey provides the perfect opportunity for visitors from Ireland and abroad to learn more about this truly unique pony, in keeping with the Benedictine community’s ethos of education. Once Covid-19 restrictions allow, the Abbey will run daily pony talks to introduce the ponies and foals to visitors who want to get up close.

From an economic perspective, the Abbey is one of the largest employers in Connemara, with up to 140 staff in peak summer months. Located just one hour from Galway, it is one of Ireland’s most popular and well-regarded visitor attractions, with 90% of visitors coming from overseas (pre-Covid). The team hope that now with the addition of the ponies, it will become one of the most-visited showcases for the breed worldwide. There is no doubt Kylemore Abbey will play a large role in the promotion of Connemara ponies — especially to overseas visitors when they are allowed to return.

When Covid-19 restrictions are eased in Europe and international travel is (eventually) back on the cards, Kylemore Abbey and its herd of gorgeous Connemara ponies are a great addition to the itinerary of any equine enthusiast heading to Ireland. You can find out more via www.kylemoreabbey.com EQ