The first Australian event of 2021 to host FEI level classes drew riders from across the country to compete in the Eventing Summer Classic at Sydney International Equestrian Centre. 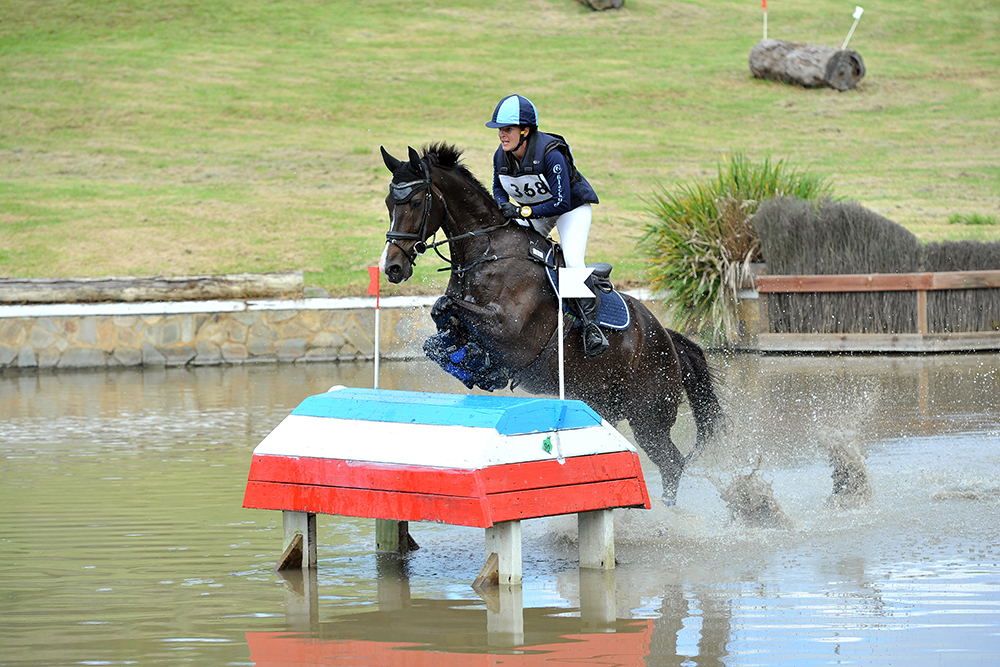 Held from 20 -21 February, SEIC gave many eventers the opportunity to stretch their legs in both the CCI3*-S and CCI2*-S, as well as national level classes ranging from EV60 through to CCN4*-S, after months of postponed or cancelled competitions.

Among them were NSW-based High Performance NEXT Gen squad rider Katie Taliana and her 10-year-old Warmblood gelding, Revelwood Wynston Street, who took out a convincing win in the Randwick Equine Centre CCI3*-S.

Katie Taliana says she was surprised by her horse’s dressage test, which set the bar high for the rest of the field.  “That’s definitely the best test he’s done to date,” says Katie. “Sometimes he does a nice test, but it doesn’t really score. And so, I wasn’t even thinking that he would score really well. I was just really glad that he was rideable.

“He was enjoyable to sit on throughout the entire test and listened and tried. He’s a very expressive horse. Sometimes he gets a bit beyond himself, but he really listened on Saturday, which was nice, and stayed with me. It was the icing on the cake that the judges scored him really well.”

Katie and Wynston continued their winning streak in the cross country phase, followed up by a clear show jumping round to add no time faults or penalties to their dressage score of 30.70.  “In the show jumping, he jumped super. We have been working with Rod Brown on his show jumping and trying to get him to jump a little slower through the air which I feel like we really achieved in the show jumping at Sydney.

“I’m a little bit notorious for having time penalties in show jumping – too many wide turns – so I’m glad I didn’t this time. And then for cross country, he was mega. He was amazing. That’s only his second three-star but it felt like he’d been doing it for three years.”

BRED FOR DRESSAGE, DESTINED FOR EVENTING

However, Revelwood Wynston Street’s path to the eventing podium has not been so straightforward. Katie says it was as though Wynston made up his own mind about which career path he would take, despite what he may have been bred to do.

“That’s only his second three-star
but it felt like he’d been doing
it for three years.” 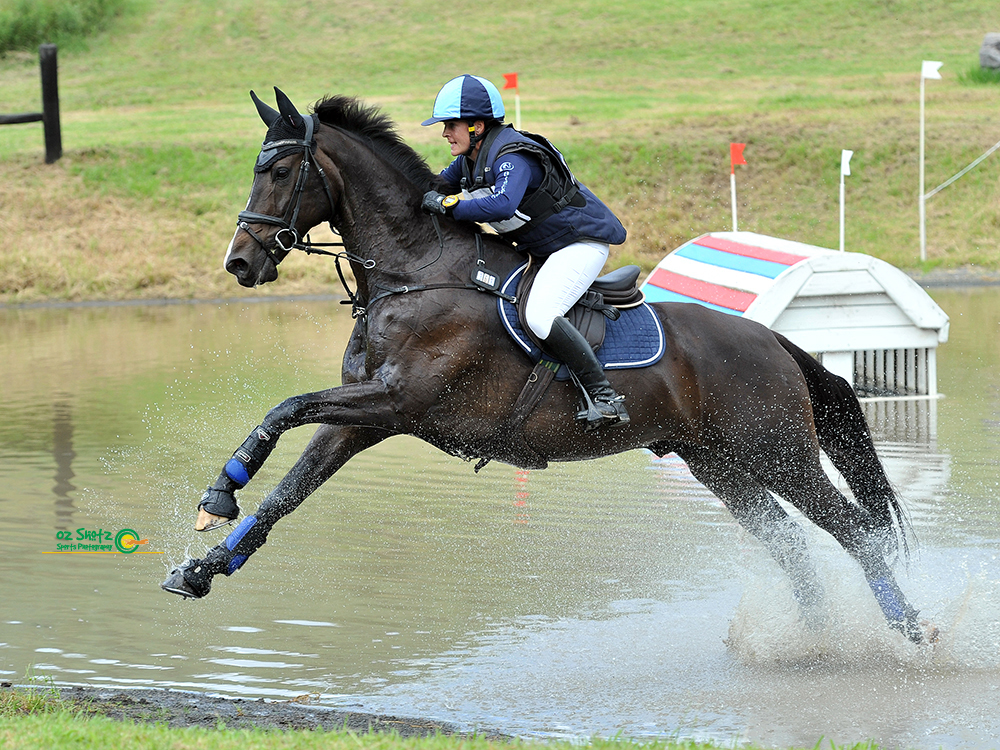 “He’s a quirky, funny horse
but he’s going to go a long way.” 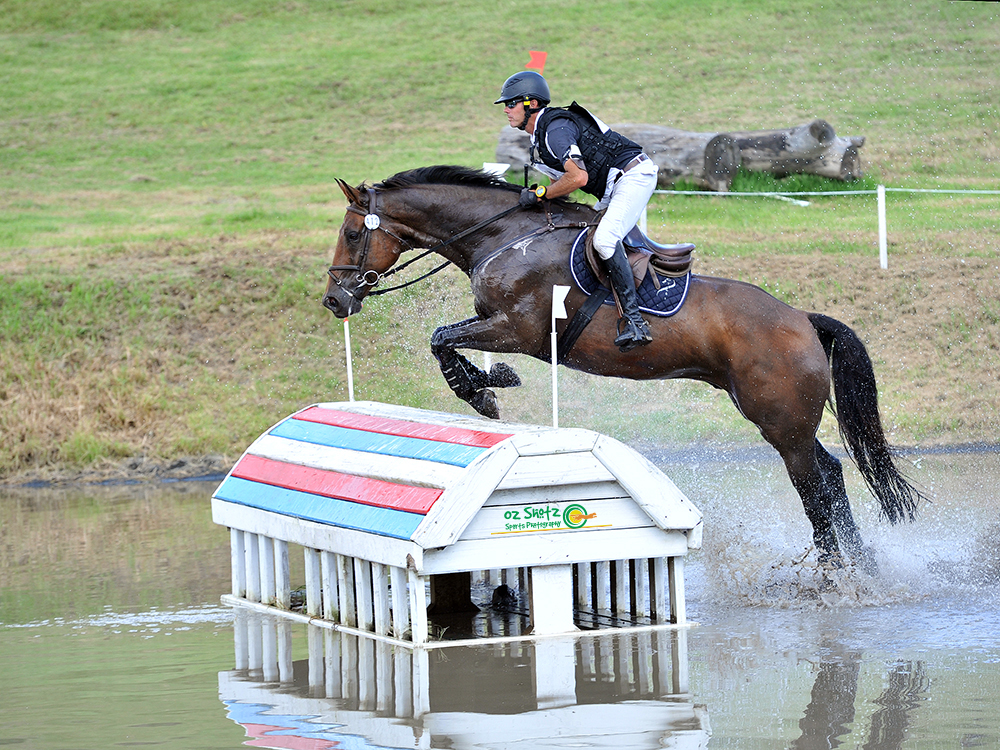 “He dumped someone in Centennial Park
and galloped around the place
for 45 minutes. And that wasn’t
even the worst thing he did…” 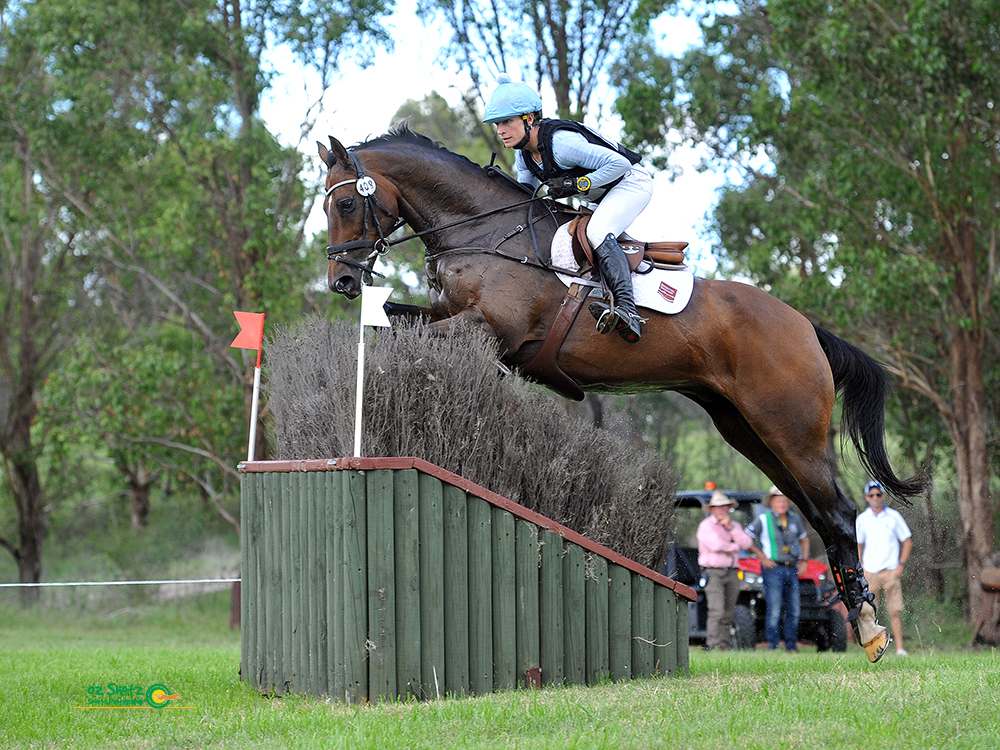 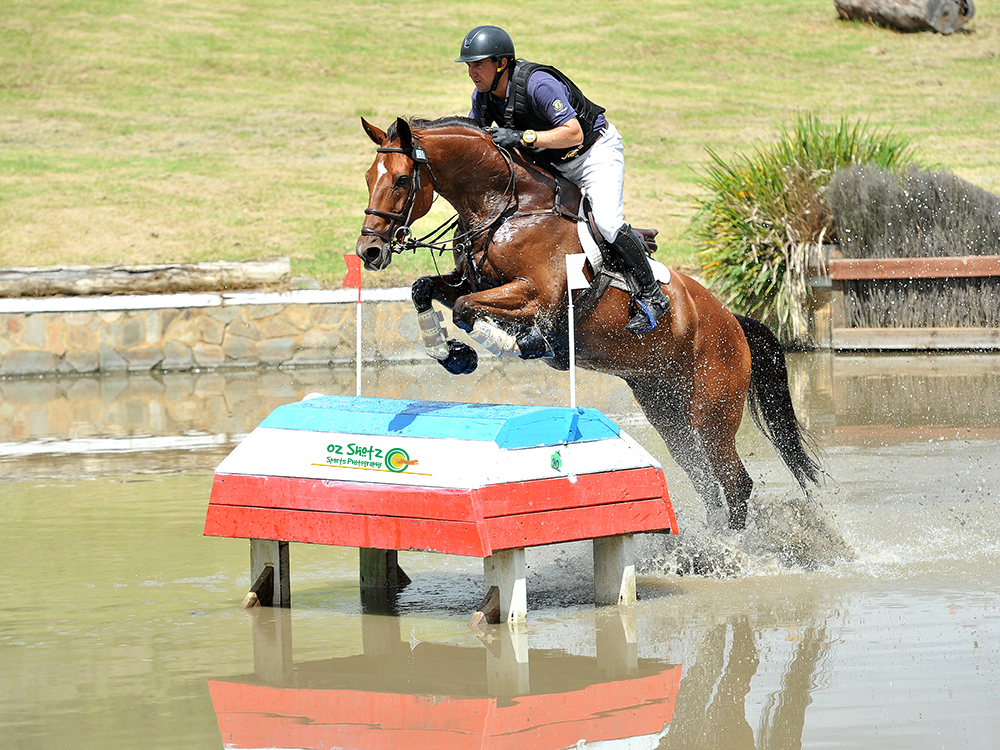 The ever-consistent combination of Andrew Barnett and Go Tosca dominated the Horseland CCN3*-S class with an incredible 26.00 penalties. © Oz Shotz

“Sell it as a jumping horse,
I just I can’t deal with it anymore!”

“He is dressage bred. A dressage lady bought him freshly broken when he was three. She had him professionally schooled by all the best dressage riders in the state. But he is just really spooky… like, really, really spooky. And it got to a point where he dumped someone in Centennial Park and galloped around the place for 45 minutes. And that wasn’t even the worst thing he did, but it was a bit of the last straw for her. So, she took him out to George Sanna’s and said, ‘sell it as a jumping horse, I just I can’t deal with it anymore!’.

“So George jumped him a little bit and then they called my husband and they said, ‘look, we’ve got this horse here. We think it will event. It really moves. It can jump but it’s not quite careful enough for a straight showjumper. But we think it will make a nice eventer’. We were definitely not looking for a horse at the time, but I had just sold one so I had the money in my pocket! We went over thinking maybe we’ll find a client for it but Nick saw me trotting it around and said we have to buy this horse.

“The old owner still stays in touch. She loves that he’s gone eventing. And she loves that he has a life because he was always just a spooky idiot, essentially. And he is still a spook. I have to be very careful. Every day I ride him at home in the arena and if something is different he disappears from underneath me. It’s not changed at all, it’s just that when he’s competing, he concentrates on me more than the things that are scary.

“Although on cross country [at SIEC], he did nearly spit me and nearly ran into a tree spooking at an 80cm log! He definitely was never going to be a dressage horse. He couldn’t stand being in a 20×60 every day. He’s a quirky, funny horse but he’s going to go a long way.”

Being challenged on the ground or in the saddle is something Katie Taliana has had plenty of experience with after working for British eventer and royal family member Zara Phillips (Tindall).  “I worked for Sharmayne Spencer for a couple of years straight out of school. Her cousin is quite good friends with Zara. So, I said to Sharmayne that I wanted to go overseas and do some travelling. She helped me set up what was supposed to be a short-term job with Zara while I was sort of travelling. Well, I ended up staying there for three years and didn’t do any travelling other than to horse events. But I loved it. It was really good fun. She’s really good to work for. It was a good team. I competed a few horses for her, which was very generous of her. And then I found Trevalgar II over there and competed him while I was there.

“Trevalgar was six when I got him over there. I got him very cheap. I intended to stay over there, and I was supposed to groom for Zara at London 2012, but I then I met my husband on the internet. So, I came home, brought the horse with me, and I’ve been here ever since.”

Now, Katie is turning her attention to Revelwood Wynston Street’s future; one which she hopes will be extremely bright after the Warmblood won only his second three-star event at SIEC.  “I don’t plan to take him out too much now, so he won’t go to Tamworth. He’ll go to Wallaby Hill and do the short format. And then he’s going to do Sydney in the long format. And then probably after that, he’ll upgrade. So, we’re not going to spend long at three-star. That’s sort of my plan and then do a four-star long at the end of the year, sort of hoping to get in the eye of the selectors for the year after for WEG. We all have those hopes and thoughts.

“It’s been a real advantage being a part of the High Performance NEXT Gen squad through the NSW Institute of Sport. The lessons with Rod Brown and Prue Barret have really benefited Wynston’s progress through the grades.”

Following close behind Katie and Wynston in the Eventing Summer Classic at SIEC in second place was Carlene Barton riding APH Henrik on 36.30 penalties. Placing in both third and fifth place was Gemma Tinney on Be My Daisy and Dalenna Daydream. And Junior Rider Charlie Richardson held his own in fourth place on Bellbirds Sandpiper.

In the Randwick Equine Centre CCN4*-S, Sam Lyle took out the win on the 11-year-old gelding BF Valour after a good run on cross country placed him into first.  “I thought the cross country course was perfect for this time of year, and for the first event of the year. It had some interesting questions, but it wasn’t crazy tough,” says Sam. “I didn’t push him super-fast on cross country. I just let him run at the speed he wanted to go, and he jumped really well.”

Leading from start to finish, NSW rider Andrew Barnett and the rising 10-year-old gelding Go Tosca dominated the Horseland CCN3*-S with an impressive score of 26.00 penalties.

Andrew says the grounds were perfect for the event due to rain in the days leading up to the weekend.

“The venue was fantastic. By the time we got there, everything had settled, so it was very unusual to have such lovely, green grass at this time of the year at SIEC,” says Andrew.

“The committee did a great job. I think it’s such a tough gig, especially with all the Covid restrictions and things they had to fill out. It was really exciting to be back in a slightly more normal atmosphere. 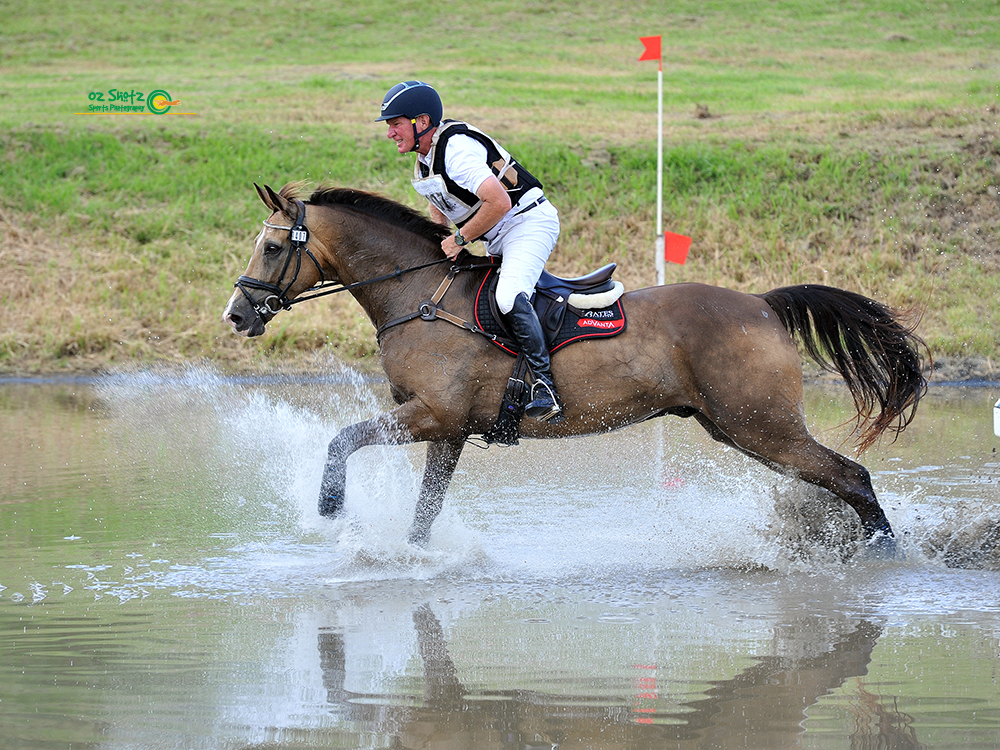 “But we were lucky in New South Wales. Last year, we were able to get to Tamworth at the back end of the year, and Wallaby Hill but with a lot more Covid restrictions. So, this is the closest event that we’ve had back to normal. There were large numbers across the two days, we were allowed spectators, so it made it feel a lot more normal at this event than what we did last year.”

Andrew says Go Tosca has only had around four starts in the three-star but hopes the gelding’s steady progression in training and competition will soon take them higher up the grades.  “He’s becoming very reliable, and hopefully he’ll have a big future ahead of him.”