With its action-packed desert race scenes, an upstart mustang up against Arabian thoroughbreds – and an actor who can actually ride – Hidalgo earns its place among horse movie epics. 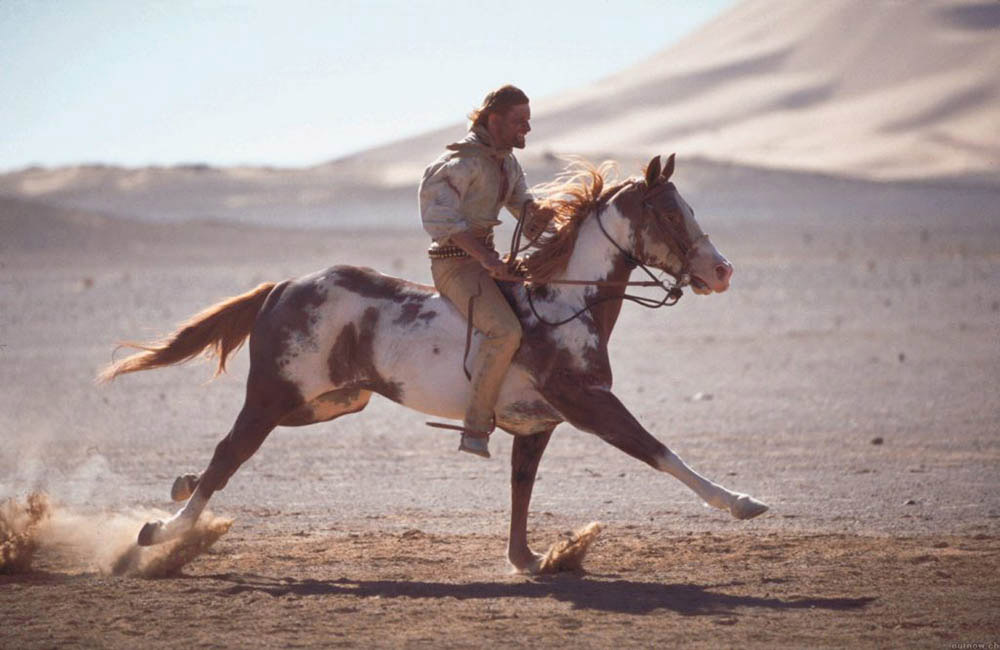 The action-packed desert scenes and Viggo's obvious talent for riding made Hidalgo a hit.
Click here to view the RB Sellars range of casual, corporate and workwear for the whole family

“Viggo is a fierce advocate
for horse welfare.” 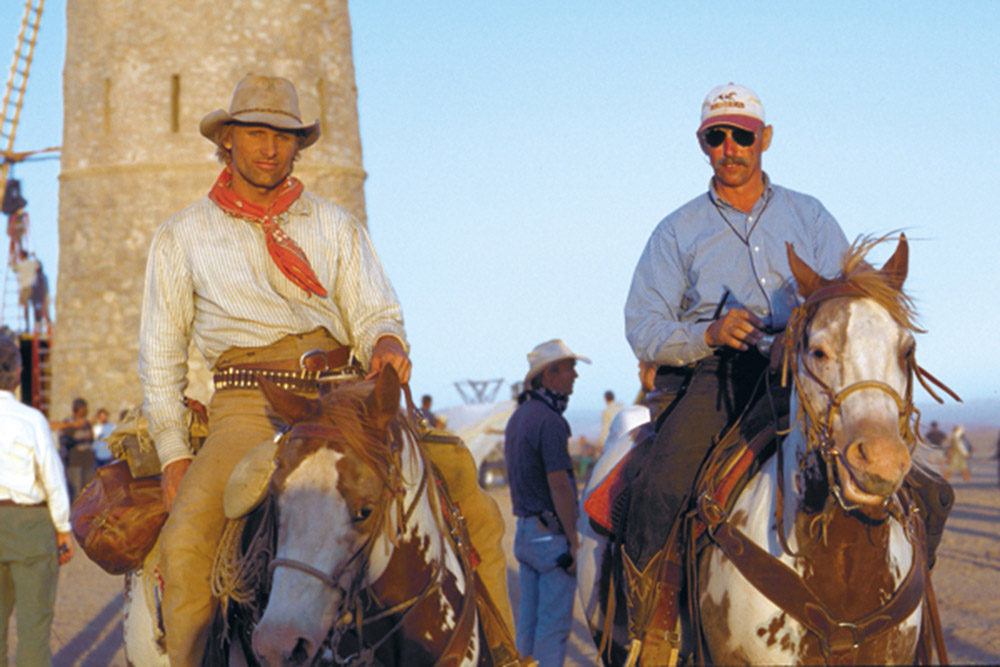 Viggo and Hidalgo's horsemaster Rex Peterson in between filming scenes.

Never let it be said that actor Viggo Mortensen is a one-trick pony. An author, musician, poet and photographer as well as acclaimed actor, he can speak several languages and, in 2002, formed Perceval Press which published The Horse is Good, his pictorial homage to the creatures he loves.

Danish American Viggo is a fierce advocate for horse welfare, most notably wild mustangs and, as moviegoers would know, he can really ride, often taking home the horses at the completion of filming. “I bought the one in Lord of the Rings ’cause I’d developed a really good friendship with him,” says Viggo. “His name was Uraeus, a Dutch warmblood who played Brego in the film.”  This top-level dressage horse, and sire of successful sporting horses, was in semi-retirement before NZ owner and trainer, the late Lockie Richards, agreed to lease him to the LotR production.

“And then there was Kenny – I rode him at the beginning of The Two Towers; he was very easy and relaxed and I just wanted Uraeus to have a buddy.” (The horses were kept on a veterinarian’s property in New Zealand and would receive regular visits from their famous owner).

After playing Aragorn in the Tolkien trilogy, Viggo made Hidalgo in 2004, loosely based on the legend of American endurance rider, Frank T. Hopkins, who takes his paint horse, Hidalgo (“nobleman” in Spanish), to run the famed (if not mythical) 3,000-mile Ocean of Fire race across the deserts of the Arabian Peninsula for a $100,000 purse – against Bedouins on purebred Arabians. He wins… of course.

All this is alleged to have taken place in the late 1800s, although some researchers and long rider historians claim that Hopkins, an ex-Pony Express rider and sometime member of Buffalo Bill’s Wild West Show, made up the whole story. But never let the truth get in the way of a good yarn.

The movie required Viggo to spend many hours on horseback. “A large part of the preparation – beyond trying to get historically into what that period was about, was to ride as much as I could, get back my balance and become comfortable with the particular horse I’d be riding in the picture,” he says.

Viggo had learnt to ride as a child when his family moved to Argentina, which was where he learnt to fluently speak Spanish. “Classic Argentinian riding isn’t too different from the Western-style – you’re using your legs and a loose rein. Hidalgo’s horsemaster, Rex Peterson, is a Nebraskan cowboy and he helped me a lot.”

By the time cameras rolled, Peterson had selected five sorrel and white horses – RJ, DC, Doc, Oscar and TJ. During training each displayed special individual talents. RJ was the most agile trick horse, DC the ultimate endurance racer, Doc took the lead as the main chase horse, Oscar was the best ride for supporting actors (John Fusco, the movie’s screenwriter, bought this mustang, retiring him on his American Indian horse conservancy in Vermont), and TJ demonstrated the greatest bond with the picture’s star. Viggo bought him. 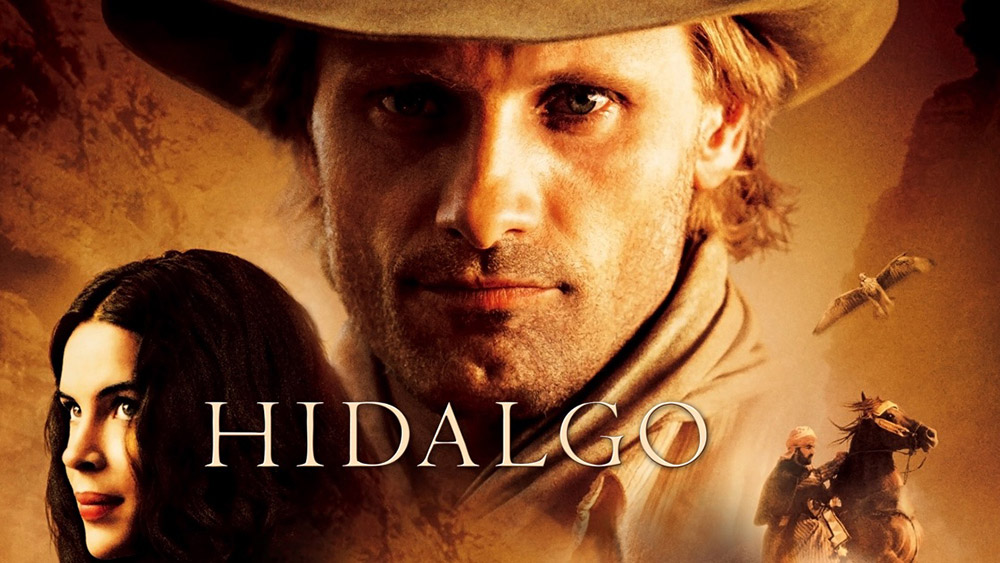 The 2004 film, Hidalgo, collected a massive $108million at the box office.

“Classic Argentinian riding
isn’t too different from
the Western style.”

“I had no intention of buying a horse off this movie,” he says, “but I got to really, really like TJ – more formally known as RH Tecontender. He was only about 14.2, a quick learner and for a stallion very relaxed on the set.  He wasn’t afraid or worried about the lights, camera, or anything.

“His ability and intelligence were so much in keeping with the Hidalgo story,” continues Viggo, whose character, Hopkins, was a laid-back cowboy who’d only punch people if they made fun of his horse he called “little brother”.

TJ’s talents were exceptional and Viggo cites the locust scene where he had to run from a swarming mass that was blackening the sky. He lays down and throws a blanket over him and his horse.  It took umpteen takes before Director, Joe Johnston, was happy. “To get a horse to lie down like that 30 times in a row isn’t easy. Getting him to hit the same spot time and time again, then throwing a blanket over him so he can’t see, isn’t something many horses, especially stallions, would put up with. But TJ did.”

(Spoiler alert) Many of the locusts were made of rubber!  And when the swarm blackens the entire screen CGI, computed generated imagery, was used.)

Weeks before any action scenes were shot there was a very big problem concerning the five Hidalgos. Just like snowflakes, no two paints look exactly alike – making them appear identical became a nightmare. A parade of hairdressers and make-up artists tried every trick in the book without success. 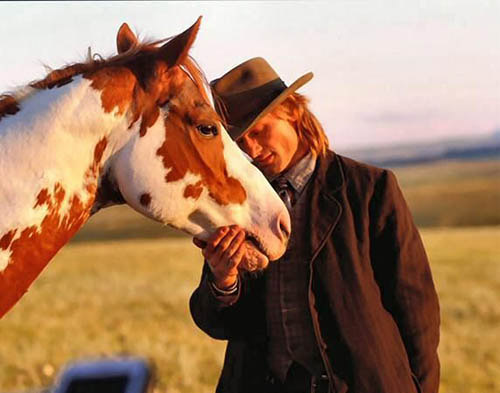 Because of the special bond that developed between Viggo and TJ, the actor bought him after filming.

“This was the biggest loose horse
stampede ever filmed.”

“Filming was about to begin, we were trying every kind of dye and make-up and getting nowhere,” recalls Peterson. “Then Garrett Immell came up with a non-toxic paint compound which worked perfectly. You were hard-pressed to tell the five horses apart.” (Today, make-up artist Immell is renowned for his prosthetics and special effects on such productions as The Walking Dead TV series.)

While no animals were injured during the making of this movie, the horsemaster ended up twice in hospital. First when a horse fell on him, and then on location in Morocco when he suffered severe bronchitis from all the dust.

Filming in the kingdom was tricky. The horses which had come from America had to be separated from the locals because of the risk of African Horse Sickness and other illnesses that the Moroccan livestock could carry. The equine stars were constantly monitored by a veterinarian, along with an American Humane representative. These AH officials were on the Hidalgo set around the clock.

The action scenes are very convincing on screen, but as usual, a lot went on off-screen to make them look real. For instance, it appears dramatic when Hopkins rides Hidalgo from his stall on a train and they jump out of the moving locomotive. To achieve this, the stall had rubber-matted floors and the train was towed by a slow-moving truck travelling at barely walking pace. A stunt rider, not Viggo, rode one of the painted doubles and the camera angle made the jump look higher than it really was.

Elsewhere, when Hopkins and Hidalgo go up a ship’s ramp into a stall, a man menaces the horse with a pitchfork and inevitably the men fight. This all took place on a specially built set. To capture the horse’s attention, the trainer stood behind the actor holding a pole with a cloth attached to the end of it. Hidalgo focused on the cloth and began to try and nip at it, creating the illusion that he was annoyed.  The pitchfork had no sharp edges, and the fight was rehearsed many times to accustom the animal to the noise and commotion. 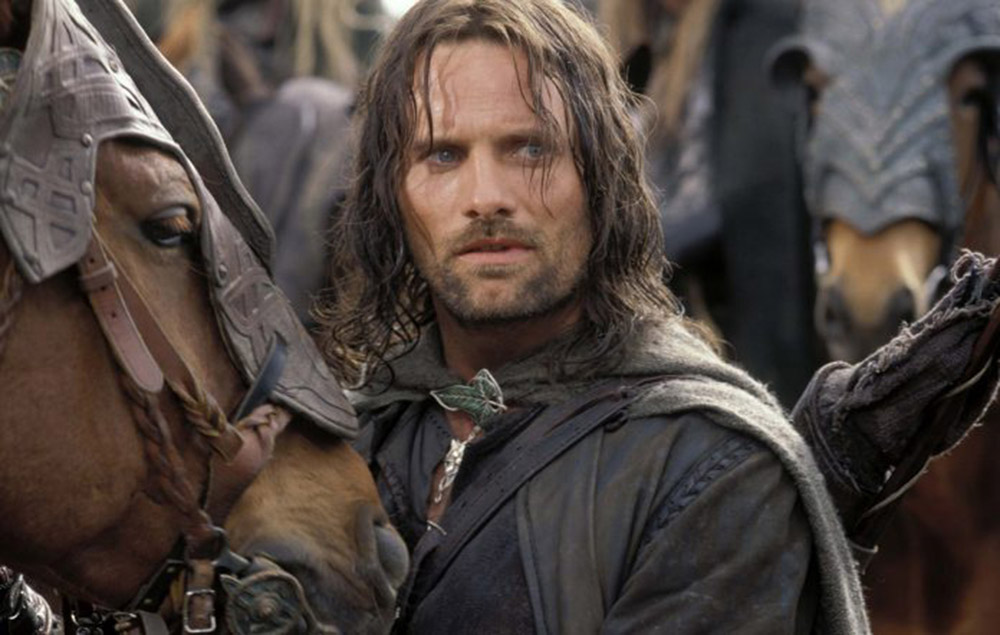 Viggo with the Dutch warmblood, Uraeus, that he purchased from Lord of The Rings.

“One reviewer cruelly dismissed
it as “nothing more than a big
old chunk of horse poop”. 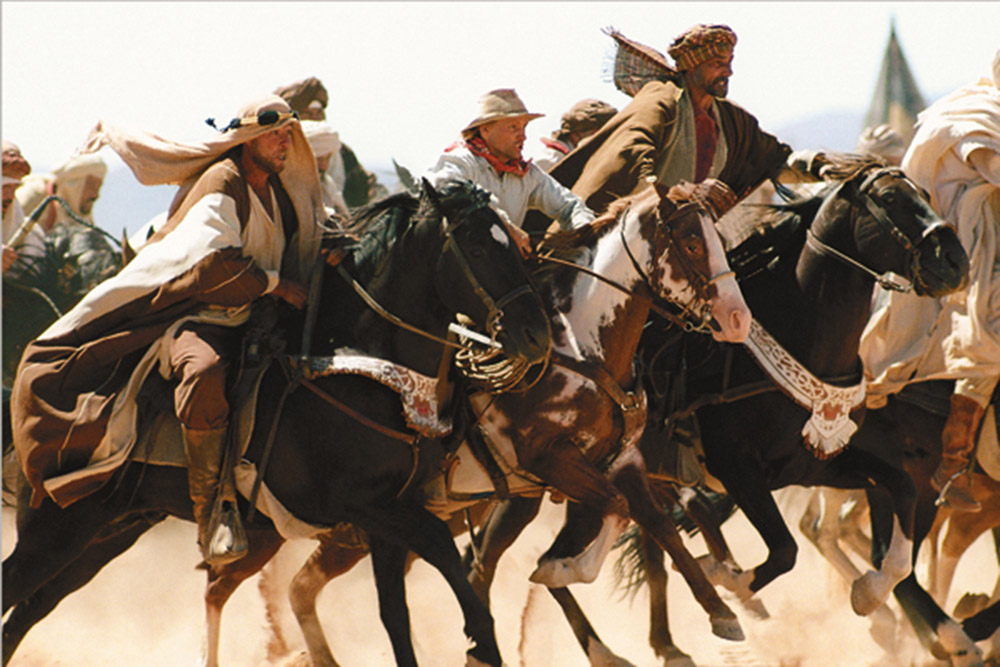 Viggo with other endurance riders that were employed for the film. 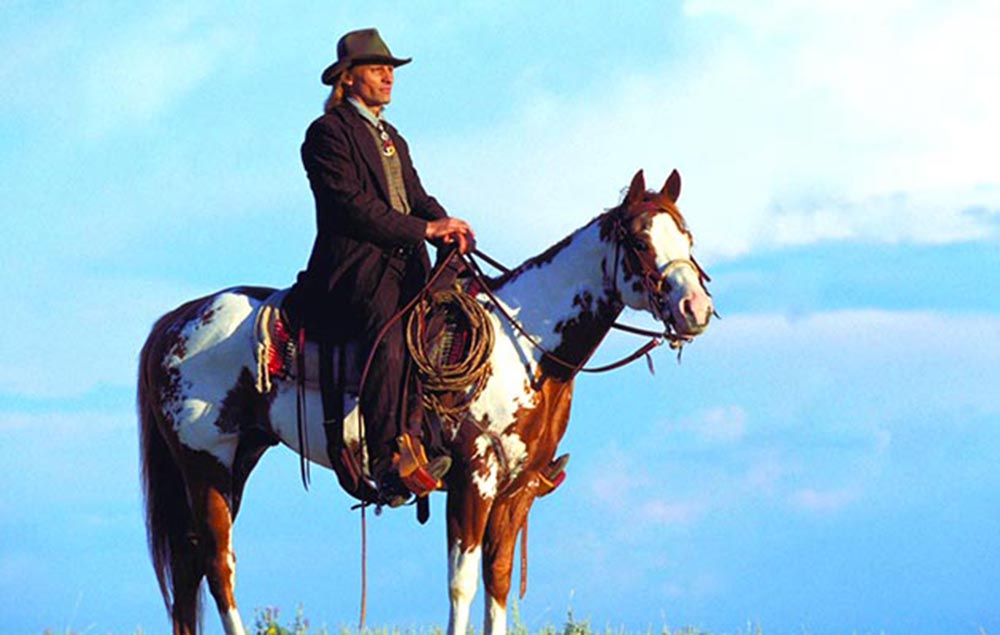 Whether you like the film or not, you cannot help but admire the final stampede sequence – it’s a breathtaking piece of footage.

(Spoiler alert) In a corral full of horses, a few bump up against the railing and break it, allowing the mob to run free across the Montana plains. Hopkins releases his horse, which rears up (of course) then joins the enormous herd.

Approximately 500 native Montana horses were used. The wooden fence which appears to break was controlled by an air-pressured cable inserted inside the rail and controlled by a crew member from off-screen. The railing opened up when the horses came near and set the animals free. Four trainers stood inside and herded the animals toward the opening, where they then ran about 2500 metres at their own pace.

Twenty-six wranglers, assorted crew members, the director and helicopter pilot all had two-way radios. During rehearsals, the helicopter initially flew 300 metres in the air and gradually came down closer to the action after acclimatising the animals to the noise. A veterinarian and float waited at the halfway point. The horses were counted and examined after each practice run and at the end of filming.

One of the greatest concerns when preparing these scenes were the gophers and badgers living in ground holes directly in the path of the horses. The local Black Feet Native Americans trapped these animals and transported them well away from the set. Film crew members then formed a “hole patrol”, filling in burrows with dirt and rocks. If any of the little critters were still underground, they could dig their way out! This also provided safe footing for the running horses.

This was the biggest loose horse stampede ever filmed and lasted just four minutes up on the screen!

The actual movie runs for two hours and 10 minutes and some critics felt it was too long; others disapproved of the script, and one reviewer cruelly dismissed it as “nothing more than a big old chunk of horse poop”.

But other reviewers loved it, as did tens of thousands of moviegoers. The New York Times said: “Hidalgo is a handsome mustang with a white face and brown patches over each eye. He gets more glamorous close-ups than Joan Crawford did in her entire career. (The horse has a much better hair-stylist, too.)” The noted American film critic Roger Ebert was gushing: “Bold, exuberant and swashbuckling, it has the purity and simplicity of something Douglas Fairbanks or Errol Flynn might have bounded through.”

Perhaps the last word should be left to Star News Online: “Small boys of all ages will love the shoot-’em-up aspects and the leopard fights. Small girls will love the horses, and older ones will like ogling Viggo Mortensen, especially when he flexes his cheekbones.” That reviewer was dead right.

In Equestrian Life’s next edition, Horses and Movies will feature Jappeloup about the French showjumper, with recollections from Vicki Roycroft of her days overseas when she competed against him on another famous little horse – Apache. EQ