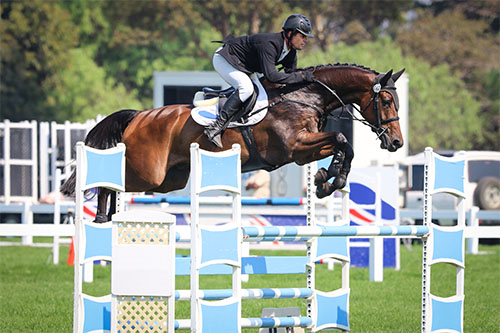 There’s nothing like red-hot competition to get the juices flowing and see where our sports are heading. The buzz that began at Dressage by the Sea in February rose in pitch at Dressage & Jumping with the Stars in late March. It’s as if the genie is out of the Covid bottle, and a whole lot of new talent has come out of nowhere. And it is not just the newcomers, our stalwart Olympic hopefuls are also raising the bar.

Werribee Park showcased the new alongside the established, where Jayden Brown and seven-year-old WillingaPark Quincy B were crowned Young Dressage Horse Champion of Champions, and Maree Tomkinson on the super four-year-old mare Imagine II also brought the house down with a record score. In the jumping, Billy Raymont showed what he is made of by taking out Young Jumping Horse Champion of Champions with Cera Cadbury Z.

Typical of the talented youth coming through is teenager Charlotte Phillips, who only began riding when she was nine years old. As Roger Fitzhardinge says in his profile of her after watching her at Willinga Park, “she has taken to the FEI ranks like a duck to water”.

Over in Germany, Lyndal Oatley was not to be outdone, scoring a personal best 76.2% at a German national dressage show on her new mare, Elvive. Lyndal is so thrilled with the 12-year-old’s Grand Prix debut after sitting out Covid restrictions, that she calls Elvive her new “soulmate”. Who knows, Tokyo might still be within grasp.

New horses are the order of the day, it seems. Other top riders embracing young horses include British dressage star Amy Stovold; and our own eventer Rohan Luxmoore, who has two youngsters he hopes will one day fill the shoes of the semi-retired Bells N Whistles.

For eventers who want to ride one of the best cross-country circuits around, don’t miss Naracoorte Horse Trials this year. Set among ancient red gums on bucolic farmland, the course is designed by the master, Wayne Copping. Read about his strong views on course construction and the charming story of how the event has been staged at the same site for almost 50 years.

Back on the home front, Heath Ryan gives our young dressage riders a heads-up to start planning now for a tilt at the Olympics – not Tokyo 2021, but Brisbane 2032! Begin your training now with Kerry Mack’s treatise on 23 ways the shoulder-in can improve your horse (and it’s not just for dressage riders!).

After you’ve done your day’s riding, sit back and read about how the horse community rallied to help more than 20 sanctuary horses caught in the devastating floods in NSW. Or enjoy Suzy Jarratt’s account of Jappeloup, the pint-sized Olympic jumper that won the hearts of all of France, in the latest instalment of her Horses in the Movies series. Oh, and have you ever fantasised about a life-size portrait of your beloved horse? Eventer and artist Terri Trivett took up a friend’s dare and the result is a stunning oil painting of her 17-hand warmblood mare. Read all about how she sees parallels between eventing and art.

As always, keep your horses happy and healthy with our health experts. Veterinarian Dr Maxine Brain explains how to predict desirable or undesirable traits in foals through genetic testing, while the nutritionists at KER remind us that brawny as horses might seem, they have sensitive gastrointestinal tracts.

Keep yourself happy and healthy by riding! EQ

Disclaimer
The views expressed in this magazine are not necessarily those of EQ Life. To the extent permitted by law, EQ Life disclaims any liability whatsoever in relation to any advice, representation, statement, opinion or other matter expressed in this magazine. EQ Life does not accept responsibility for errors in advertisements, articles, unsolicited manuscripts, photographs or illustrations. Riding, training or otherwise working with horses and other animals can be dangerous and may result in harm or injury. Readers of this magazine should not engage in such activities unless they do so safely.
© 2021 EQ Life Pty Ltd. Copyright subsists in this magazine. Except as permitted by law, this magazine may not, in whole or in part, be reproduced, published, adapted, stored in a retrieval system or transmitted in any way or in any form, without the prior written consent of EQ Life. All rights reserved.