When a friend dared Terri Trivett to create a life-size oil painting of her 17-hand warmblood mare, she rose to the challenge. Five months later, Unfinished Business stepped into the light — and its creation was a journey that many equestrians will identify with. 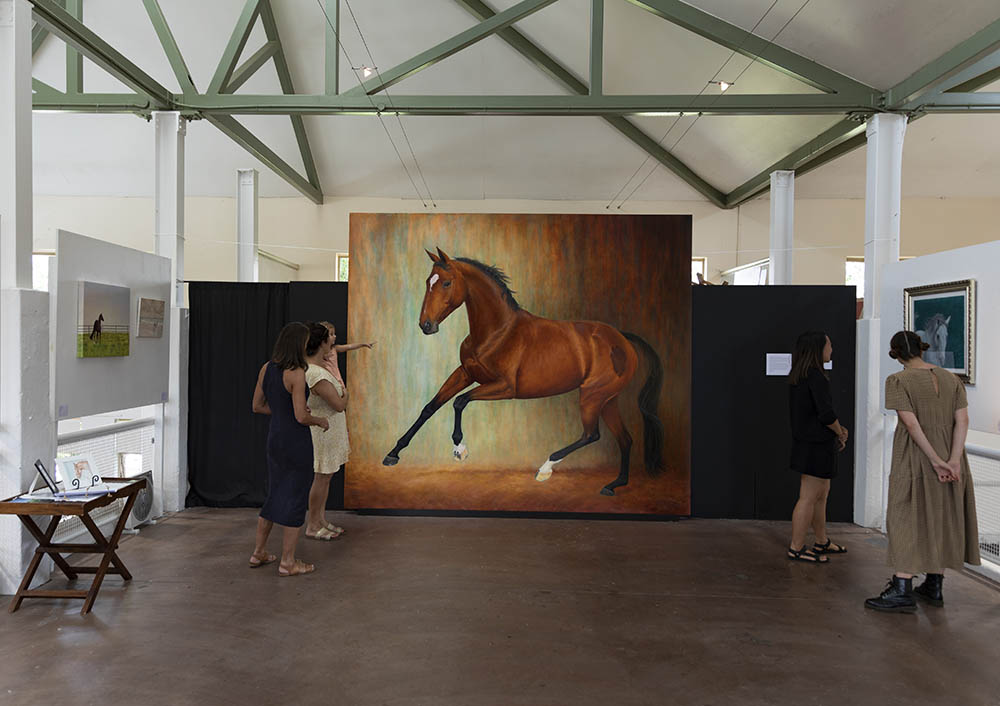 “Learning, challenge, risk and opportunity. To me, this aligns with being an eventer; it’s the same themes,” says emerging Queensland artist and equine enthusiast Terri Trivett (formerly Kolb) of the narrative surrounding the centrepiece of her first exhibition.

The imposing life-size rendition of her 17-hand warmblood mare towers over those who stand before it. Titled Unfinished Business, the oil on canvas is an ode to those passions in life that we don’t always get the chance to fully explore, whether it be art, competitive riding or something else altogether. “Both art and competing in eventing are life ambitions for me, and thus Unfinished Business is the theme of this painting and the exhibition,” explains Terri.

Terri’s path into the world of art — and her path back to horses — share many parallels. A passion for both has always been present, but as is so often the case, careers and other responsibilities asserted precedence for many years. However, life has now led her to getting back to picking up the reins and continuing with unfinished business. 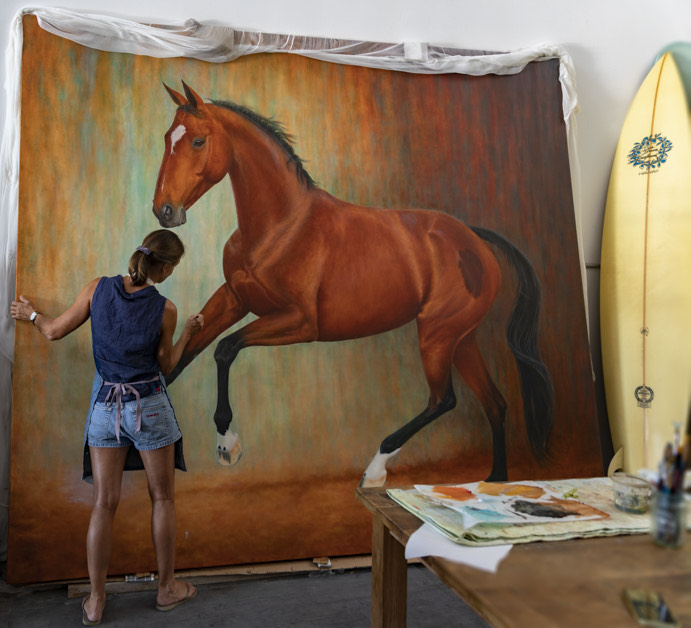 Some of the final brush strokes on the incredible life-sized painting by Terri Trivett. © Chris Hall myphotomotion 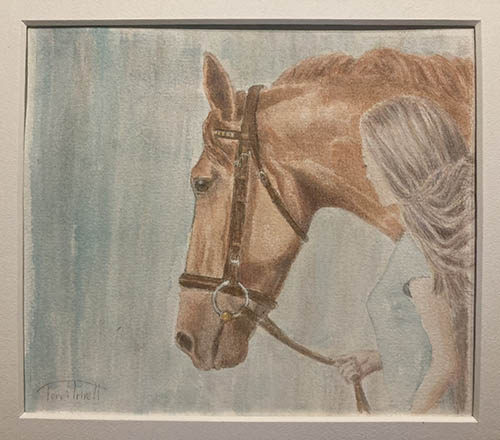 Terri had painted before, including this small watercolour of her daughter and her horse, but had never dreamed of undertaking a piece as large as 'Unfinished Business'. 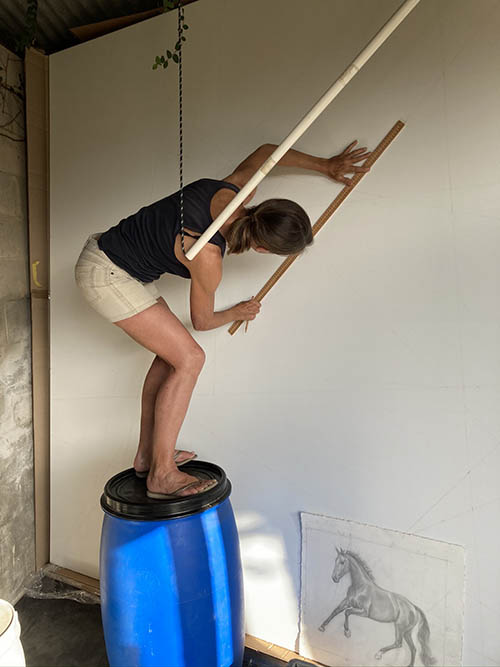 Terri painstakingly measured the canvas to create an accurate life-sized sketch before starting to paint.

“This aligns with being an
eventer; it’s the same themes.”

THE ROAD BACK TO HORSES… & ART

Terri has loved horses all her life. Growing up in a non-horsey family in California, she still managed to receive her first pony as a child. “I was very much the kid that was without a saddle the first year!” she laughs. However, that didn’t slow her down and it wasn’t long before she was at Pony Club.

“Portola Valley in California was a very horsey town. We had fantastic coaches and a very competitive cohort of riders,” Terri recalls. She competed in all the Olympic disciplines into her teenage years, and then her career in the saddle was traded for study. “I was told, ‘right, now you go off to university’.”

Terri got a Masters degree, a career, and eventually moved to Australia where she obtained a role that involved teaching at university for 20 years, and had children. “And so I had a 25-year break from horses,” she explains. “My daughter drew me back to riding when she was eight years old. She was one of those kids who had the mutant horse gene,” Terri admits at the time she didn’t know much about horse ownership in Australia, or about the country’s rich equestrian history — but she was about to find out.

“I bought (my daughter) a shaggy little pony, and she was dragging that around jumping courses before I knew it!” Next came “a gun little horse” that would see Terri attending endless interschool events where her daughter competed across five disciplines. “She dragged me up and down the east coast of Australia competing, and ended up with a scholarship due to her riding.”

For Terri, the opportunity to get back in the saddle herself eventually won over. “I got my own horse, an Anamour gelding. I was really hoping he would become an eventer… it took a little while because he really wanted to be a dressage horse. In the end, we had a number of wins at the ‘old’ pre-novice and one star. We saw a lot of Australia competing, however, I did lose him in his prime, which was really sad.”

The next horse that stepped into Terri’s life was Estrellas Remarkablez, a warmblood mare by Renegade Z. “She’s been a really big project,” explains Terri. Not long after purchasing her, an injury sidelined Terri for some time. “While I was out, I took up some art, which is something I’ve always wanted to do, and never ever had space in my life with all the other things I did. And one thing led to another and the artist came on very quickly.”

While Terri was sidelined, opportunity saw Estrellas Remarkablez taking the leap from eventing project to art muse. “I had a friend that I would run with, and she’d hear about the horses constantly… especially this new one. She said, ‘why don’t you paint the horse in life size? And I said, ‘well, okay!’” 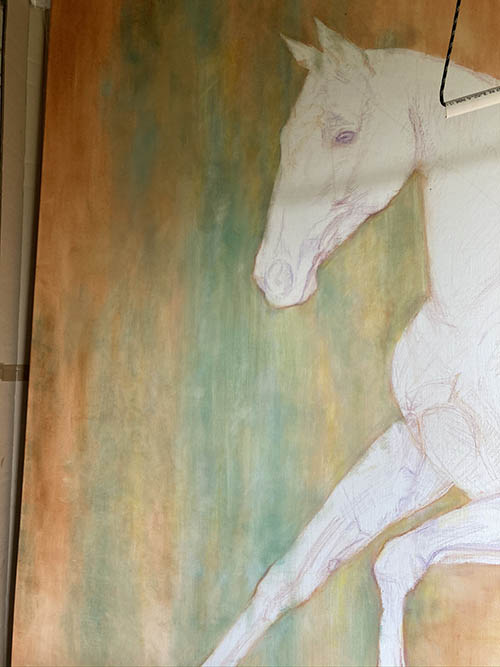 “She can get a bit excited.
She’s always enjoyed the jumping.”

“I was really nervous,” says Terri, referring to those first few brushstrokes on the towering 2.6 x 3-metre linen canvas. Being only her third piece using oils and having less than two years of experience under her belt, Terri sought to mitigate risk by being incredibly methodical in terms of composition and preparation. “I spent a ton of time thinking about the composition. I used hundreds of different photos and measurements of the horse, and I arrived at a composition that I thought would look alright. She’s (Estrellas Remarkablez) got the most amazing canter, so I wanted to represent that.”

Once the composition was mapped out, Terri drew the horse freehand onto the canvas first; it was then time to paint. “I started with the background, and then went to the horse. I built it up in thin layers, as I didn’t want to lose the translucency. There were some days I came in and I said, ‘I’m just not ready to do that bit yet today, I’m just going to think about it. But I can do that hoof’, so I would do that.”

She began working from her friend’s stable due to the size of the canvas — and having her mare close by as a reference was handy. “I started painting based on a lot of self-directed learning… the best thing was the fact that it actually worked!” When her friend eventually needed the stable (the painting took five months to complete) Terri moved into the studio of Sunshine Coast surf art legend Owen Cavanagh. A different working environment, but really fun and fabulously inspiring! 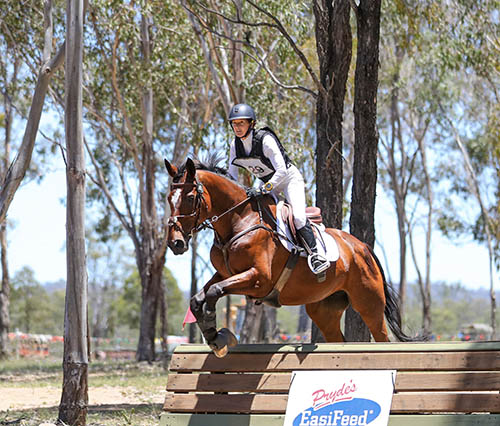 Terri and her 17hh mare competing in eventing at Warwick Horse Trials at the end of 2020. © J'Taime

BACK IN THE SADDLE

Terri has now been back in the saddle for some time, and seven-year-old Estrellas Remarkablez is developing well. “I took her eventing at the end of last year and she was second at Warwick Horse Trials in the Introductory class. I’ve built a pretty strong base in her, because I just wanted to make sure all the gears were in place before competing.

“She’s always enjoyed the jumping, but sometimes when she was younger she enjoyed jumping when it wasn’t necessary! She has become a really willing partner and a really happy horse that wants to do her job. Now I feel like we’re there, and we’ll be able to move up. When I painted her, I had her coming from the darkness into the light, which is a metaphor for her training.”

Terri notes that looking at the painting now, she can see how much the mare has developed. “She’s so much bigger, rounder and more developed!” 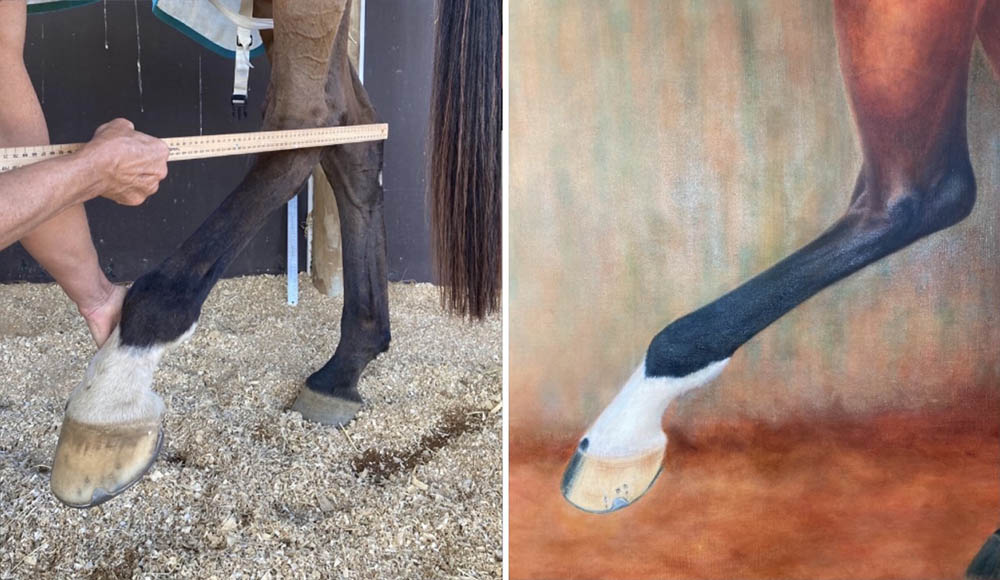 Terri took real measurements from her horse to create the life-sized artwork.

“I would absolutely love
the chance to paint really revered horses.” 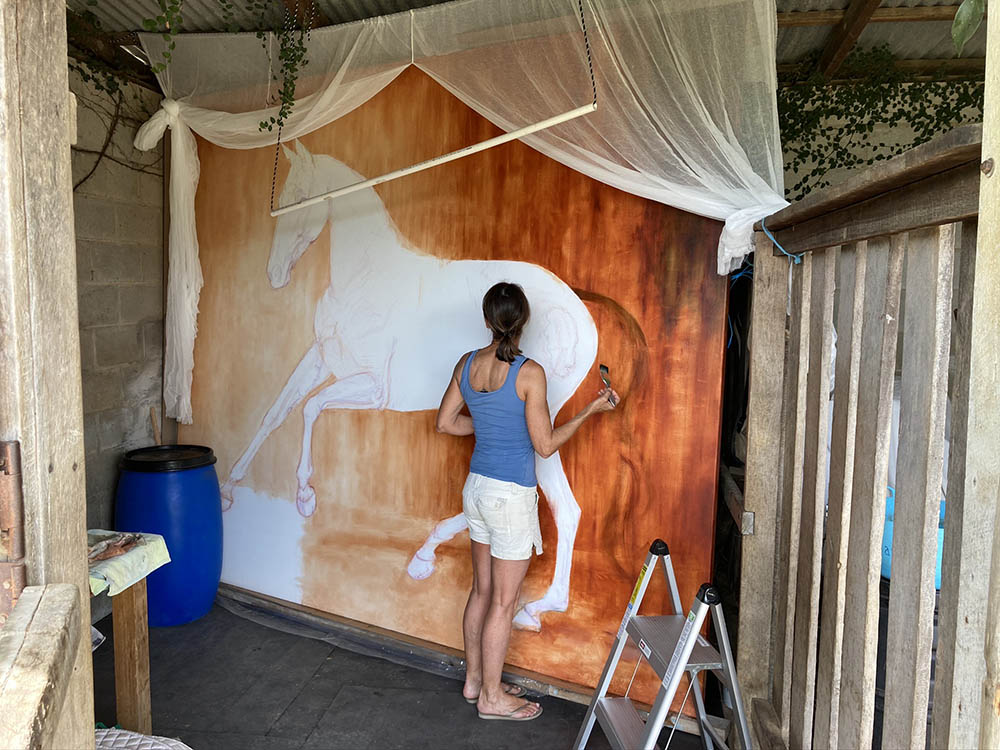 “All the top competition
horses have an interesting story behind them.” 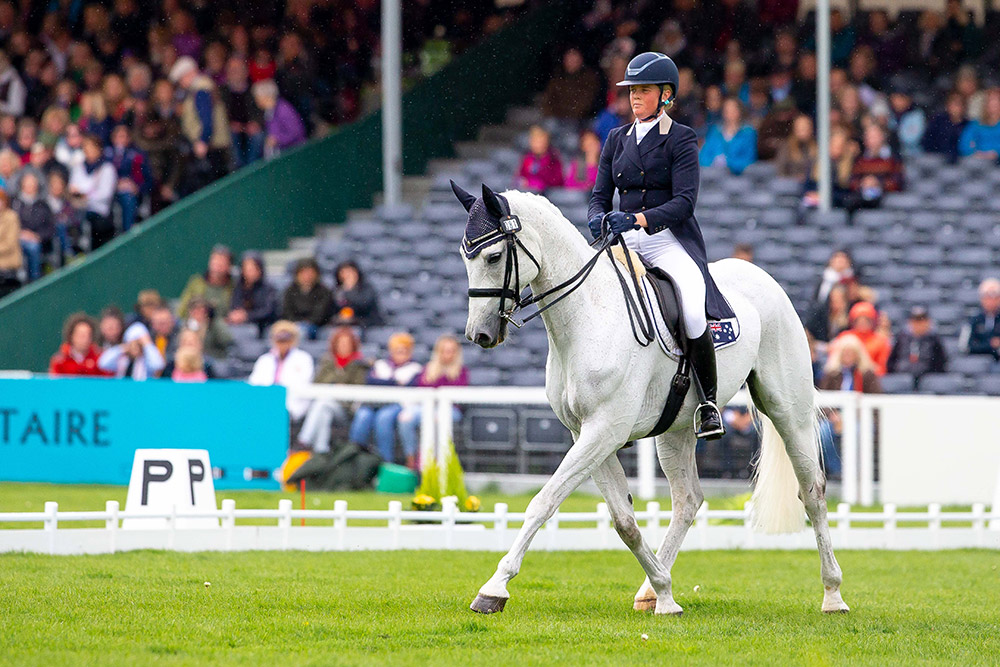 Terri’s first exhibition at the Butter Factory Arts Centre in Cooroy, southeast Queensland, was an opportunity that came about by chance as there was a gap in their busy program. “I showed them what I had done, and they said, ‘Look, we just need to squeeze that in!’”

Set up as an emerging artist exhibition, Terri was able to showcase Unfinished Business alongside some of her earlier pieces across various mediums — many of which were also horses, including one of her daughter’s pony and an image of a horse underwater, the muse for which was Robert Goodwin’s showjumping stallion, Warrego William.

“We had local riders through and I was just really happy to have dressage coaches and judges say, ‘yes, you’re correct’ in reference to my painting of Estrellas Remarkablez. That’s what I wanted to hear!”

Unfinished Business is off to another exhibition at the end of April, and then will possibly be entered for an art prize later in the year — if it’s not sold beforehand. “I have had a little bit of interest,” says Terri. Like selling a loved horse, it won’t be easy seeing the piece off to a new home. “I’ll try to be pragmatic; in this case, at least I get to keep the actual horse!”

Besides the steep learning curve, Terri says the production of this painting has been an incredible experience and she looks forward to the chance to undertake further full-size paintings of horses and build her business. “I would love to get to the point with my art business where I can contribute back to the sport and be a sponsor for events, for example. I enjoyed (the creation of Unfinished Business) so much, I just want to do more. I would absolutely love the chance to paint really revered horses.

“I’m just an emerging artist and it takes a lot of trust for people to want to do a big project with somebody new,” says Terri. However, not one to shy away from a challenge or turn down an opportunity, she is already dreaming of the next horse to recreate on canvas. Although reluctant to name names, Terri says that her wish list includes two stunning greys — showjumper David Finch’s stallion Charlemagne Ego Z and eventer Isabel English’s Feldale Mouse (because this little horse has such a great story) — alongside Beezie Madden’s retired superstar jumper Cortes ‘C’. Of course, she’d relish the chance to paint any horse; after all, they all have their own special stories.

“When undertaking a commission, the challenge is representing the horse accurately and positively, with all their beauty and personality, as appreciated by their riders and owners. All the top competition horses have an interesting story behind them; finding a way to visually convey this narrative of the horse through aesthetic elements in the painting is so important to me as an artist.”

A life with horses is often unfinished business; we never stop learning and growing in our equestrian pursuits. The painting of Estrellas Remarkablez is a reminder of what we can achieve when we’re prepared to rise to the challenge and take hold of opportunity with both hands. And if you have a big wall and want your horse in your house — well Terri can help with that life ambition. EQ