The return of Dressage & Jumping with the Stars (DJWTS) after a forced year off had riders, judges and spectators alike jumping for joy so much that they could have been ‘dancing with the stars’ they were so excited. 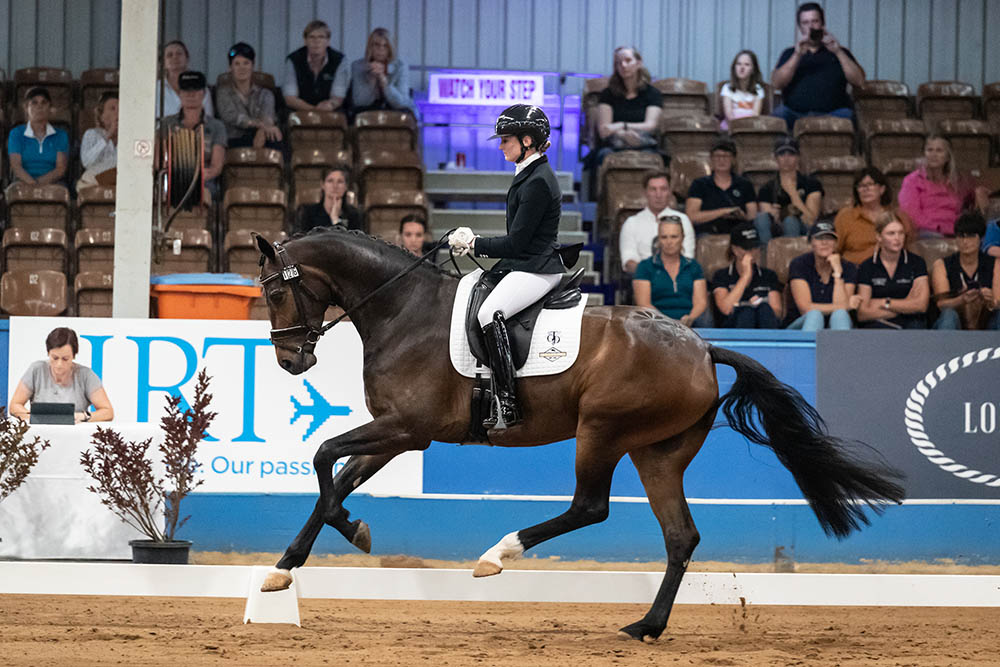 Maree Tomkinson and 4YO Champion, Imagine II, scored a perfect 10 for canter and 9.5 for perspective! What a combination to follow. © Simon Scully
Click here to view Hygain’s supplement range

“With scores as high as 89.90%,
the community was treated to
world-class entertainment.” 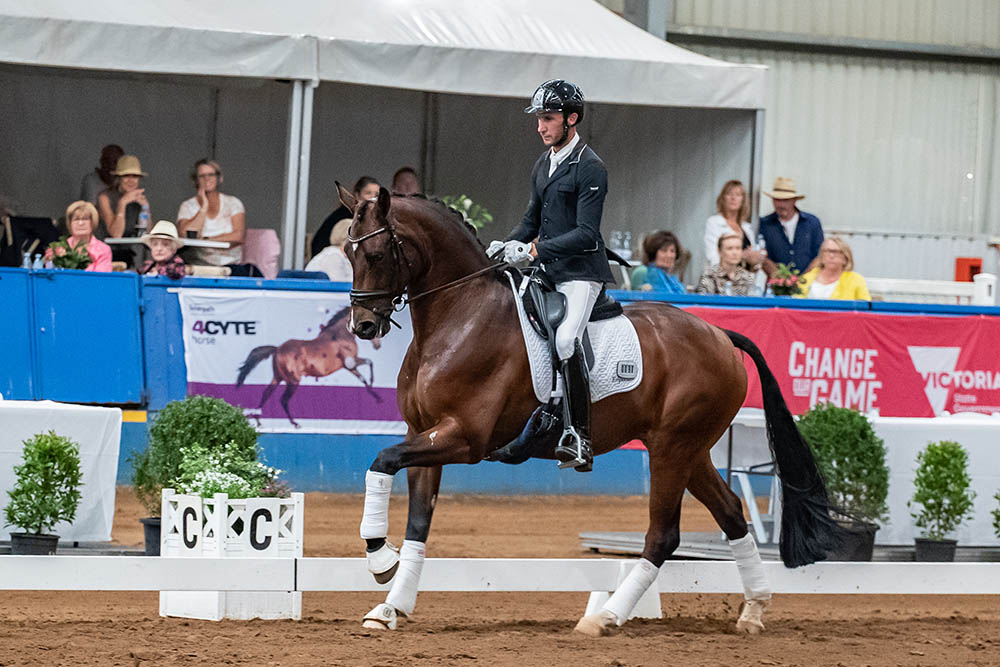 WillingaPark Tito, ridden by Jayden Brown for Willinga Park, secured the five-year-old champion title with a score of 84.40%, including a 9.0 for perspective. © Simon Scully

After being forced to cancel the 2020 PSI DJWTS due to Covid-19, the 2021 event at Werribee Park National Equestrian Centre was highly anticipated and did not disappoint. With scores as high as 89.90%, the community was treated to world-class entertainment and fierce competition across all levels.

Werribee Park turned on three days of practically perfect weather to showcase the nation’s Olympic combinations as well as the up-and-coming young horses and hopefuls who represent an exciting future for the sport in Australia.

Maree Tomkinson and Susan Gorst’s stunning Imagine II was crowned champion four-year-old. With a perfect 10.0 for canter and 9.5 for perspective in the second round, breathtaking does not really do justice for this mare. Together Maree and her super mare Imagine II brought records at DJWTS with a total score of 89.9%. Imagine II is by Ibiza out of St Moritz and bred by Johannes Westendarp in Germany; her cadence and elasticity throughout all her work cements her as a very promising horse, and with Grand Prix rider Maree Tomkinson taking the reins, this will be an exciting combination to follow.

Second place went to Quizzical R, ridden and owned by Tyler Bain, with a score of 80.40% in the second round. This striking gelding is by Questing R out of a Jive Magic mare, bred by the Ryans. Questing R was the sire of two of the three horses that achieved over 80% in the four-year-old young horse class; BZ Qantas (by Questing R out of a Regardez Moi mare) and rider Maddison Growcott placed second in the first round with a score of 80.00%, underlining the quality offspring this Australian stallion is producing. Third went to Lizzie Wilson-Fellows riding HB Furst Choice. This striking gelding, by Furst William out of a Chequille mare and owned by Hollands Bend Warmbloods, was just shy of the magic 80 in the second round with a score of 79.60%.

Tamlyn Farm Calamity Jane, ridden by Justin Worthy and owned by Mardi Ramsey, won the four-year-old pony championship with a super score of 83.80% in the second round. This pocket rocket is by Cheval DeLuxe out of a Gandalf mare. In second was Karen Blythe riding Long Park Lucky for Emma Turnbull for 79.20%. Grenwood Rendition, ridden and owned by Andrea Newlands, placed third in the second round with 73.00%.

WillingaPark Tito, ridden by Jayden Brown for Willinga Park, secured the five-year-old champion title with a score of 84.40%, including a 9.0 for perspective. This exciting gelding is by Top Gear out of a Florencio mare. Although a little hot at times, his natural uphill movement is already showing the potential for collection. With this combination having only a handful of competitions under their belt, they show promise for an incredible future.

In second was Maree Tomkinson riding Friday IV. Friday is by Furstenball out of Maree’s World Equestrian Games mount, Diamantina IV, and with such a pedigree it is no surprise the combination scored 83.40% in the second round. Third place went to Victoria Weir riding Luckybird on behalf of Mary and Rob Hanna. This KWPN gelding is by Everdale out of a Metall mare and, despite a couple of tense moments, received a solid score of 79.40% in the second round.

Freemans Lodge Divine Essence was the winner of the second round of the five-year-old pony championship with a score of 84.00%. Ridden by Justin Worthy and owned by Vicki Chidgety, this stunning German Riding Pony is by Classic Dancer 1 out of a Bodyguard P mare. With a 9.0 for a trot and a score that would have placed them second against the horses, there were many smiles on their support team’s faces! In second was Annie Creed’s Brookside Shazam with a score of 83.80%. This Welsh cross German Riding Pony by Dracmoore Firestorm was bred by Lisa Salter. In third was Fawks Crocodile Rock, ridden and owned by Clair Arnold, for a great score of 79.00%. This super Welsh Cob is by Burrowa Rockstar out of an Abergavenny Achilles mare. 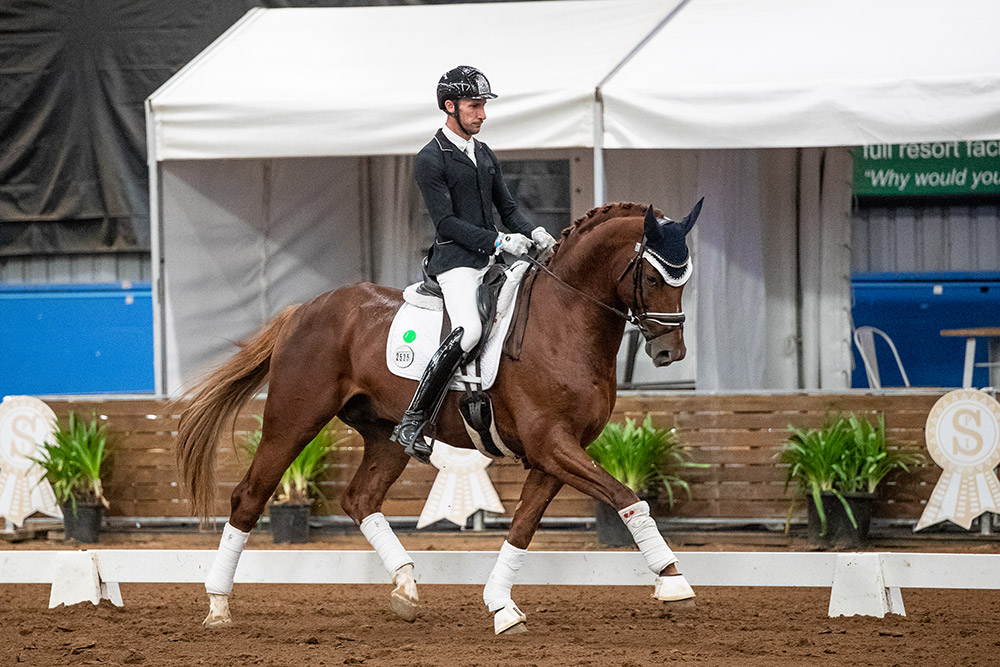 WillingaPark Fangio for Jayden Brown was the six-year-old champion with a score of 81.00%. The standard of the Willinga Park team has certainly raised the bar in Australia. © Simon Scully 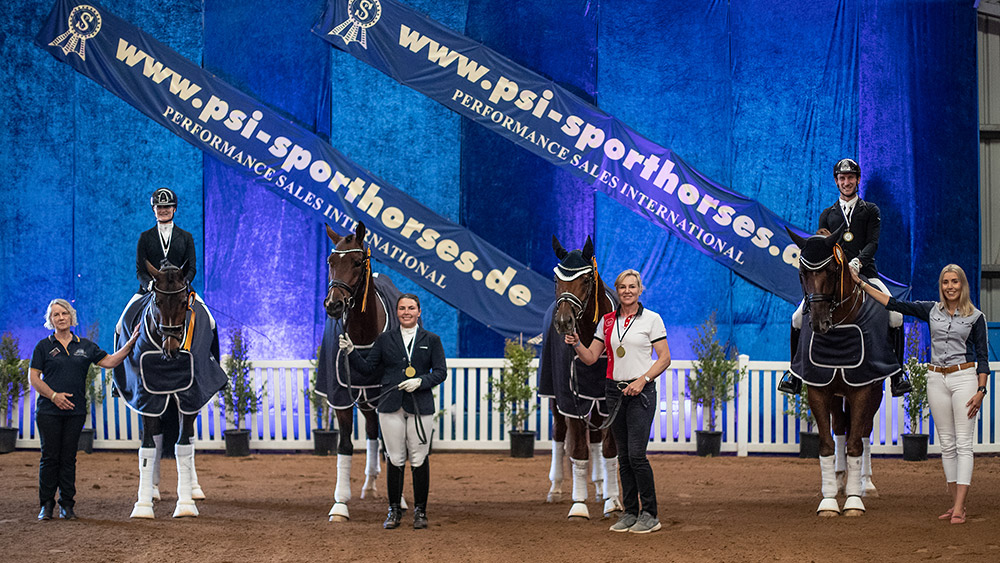 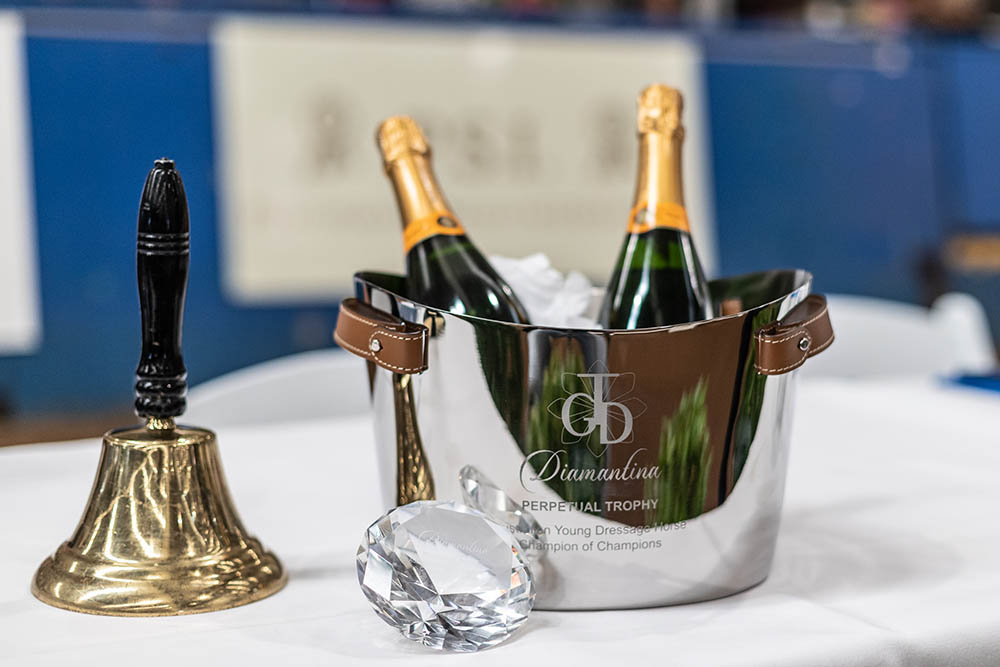 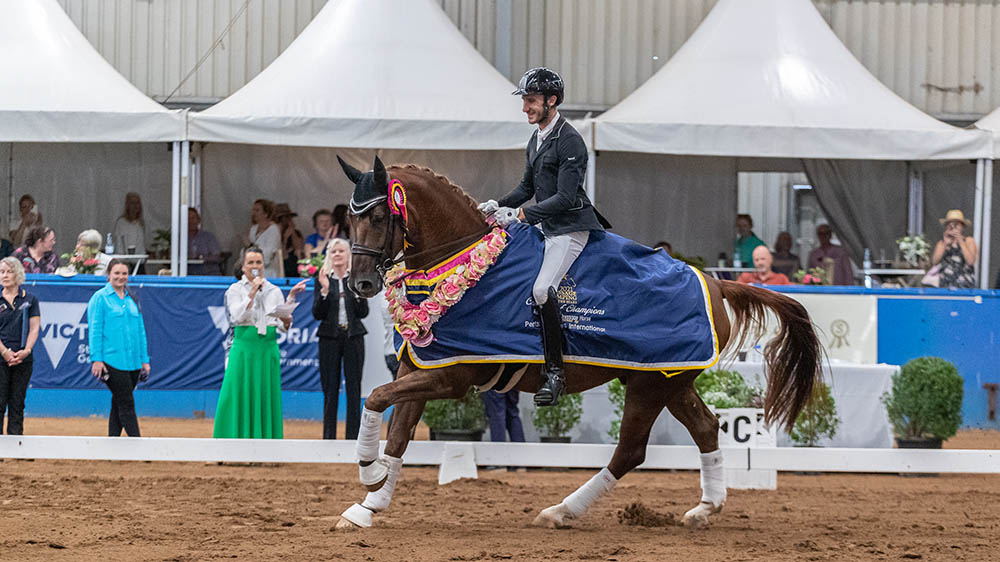 Jayden Brown and WillingaPark Quincy B, who was the seven year old winner and overall Champion of Champions. © Simon Scully

WillingaPark Fangio for Jayden Brown was the six-year-old champion with a score of 81.00%. This stunning stallion is by Flannell out of Weingold. Compact and expressive as well as divine to handle, the standard of the Willinga Park team has certainly raised the bar in Australia. In second was Jason James riding his and Michelle Williams’ Glock’s Zonik mare, Total Zensation. Bred by Total Equine Genetics, the combination scored 79.20% in the second round with 8.5 for trot and 8.0 for perspective. Third was Elliot Patterson riding Riveroak Vogue for Emma and Paul Weel, achieving 79.00%; Riveroak was bred by PSI, by Vivaldi out of a Sandro Hit mare.

To no one’s surprise WillingaPark Quincy B was the seven-year-old champion with a total score of 82.786%. With 9.2 for canter, 9.0 for perspective and 9.0’s throughout his test, this combination is on everyone’s radar. This striking gelding is by Quarterback out of a Desperados mare and bred by Silke Brunkhorst. Yarramee Fonzie, ridden by Justine Greer for owner Sharyn McCombe, was second in the second round of the seven-year-olds with a score of 74.243%. This gorgeous black gelding is by Firestone out of a Polansky mare. 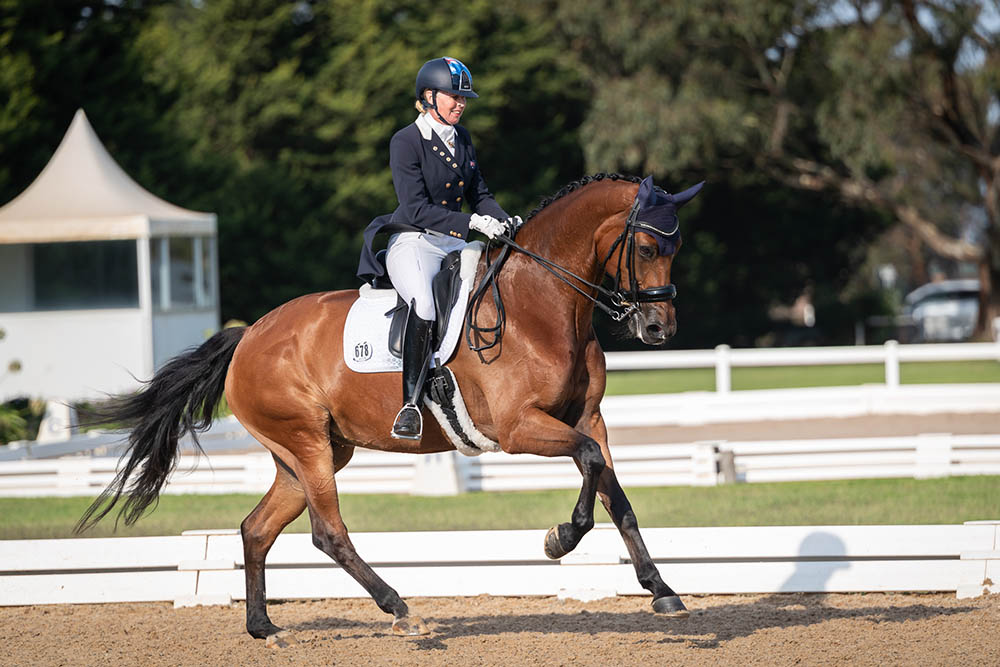 Mary Hanna and Calanta shone for first in the Grand Prix with a score of 73.696%. © Simon Scully 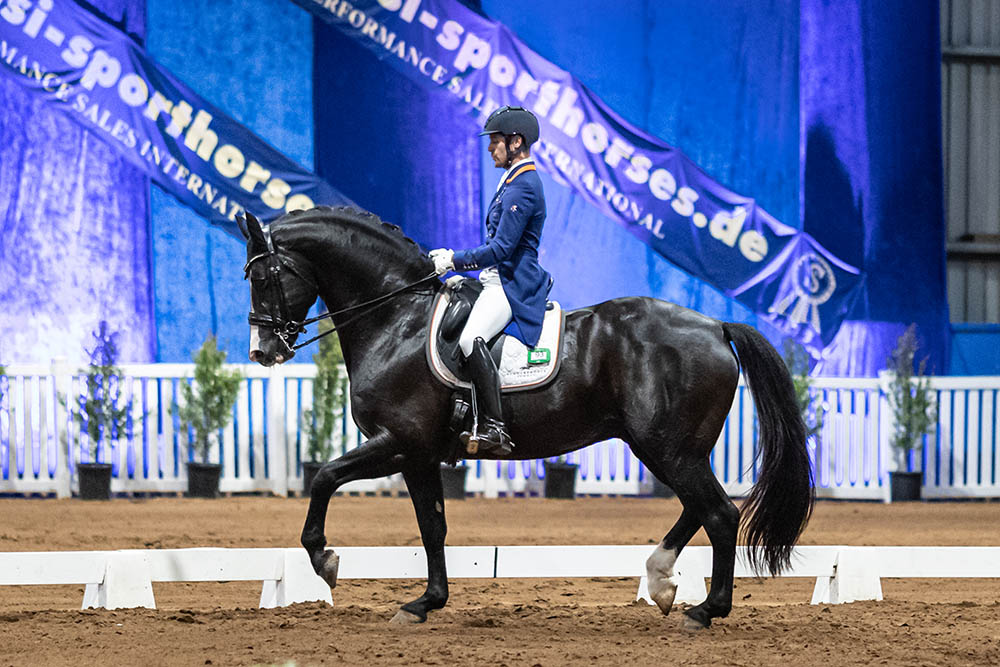 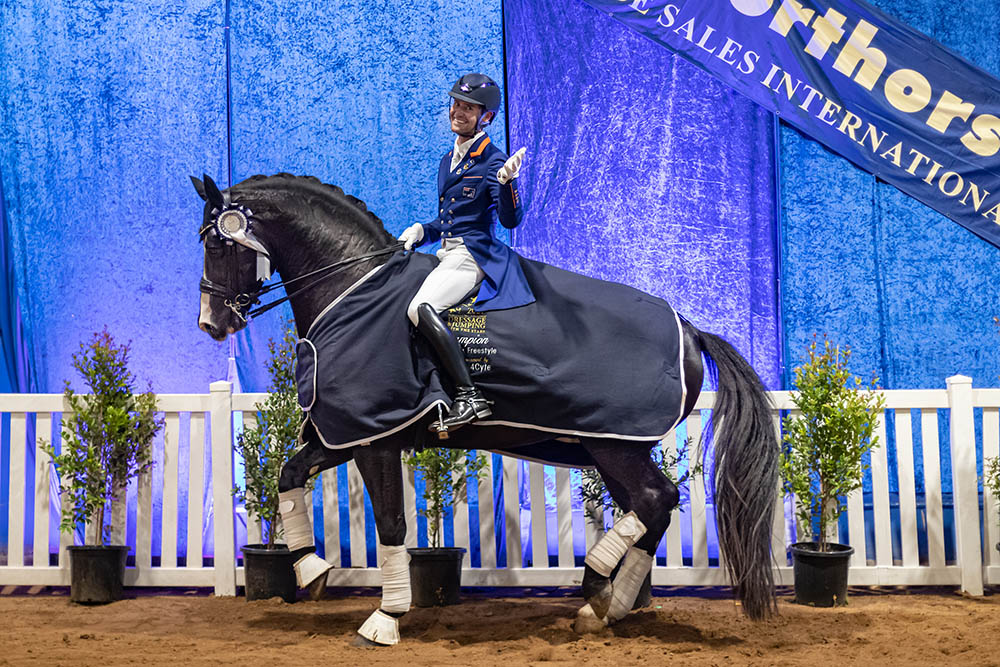 The Interpath 4CYTE Grand Prix Freestyle had John Thompson and JHT Chemistry dancing their way to first with 75.195%! © Simon Scully 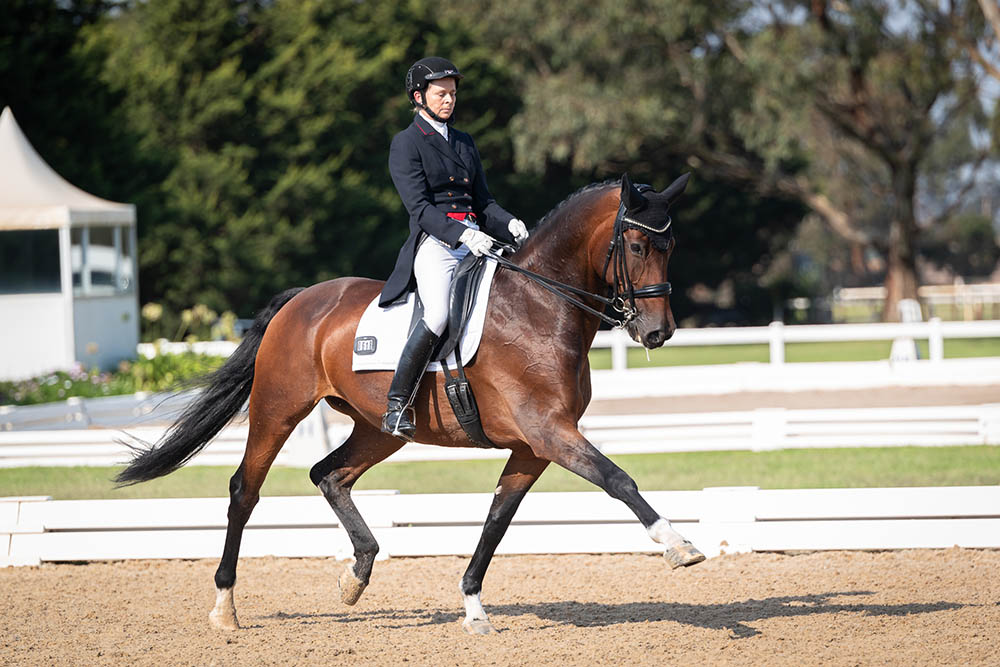 Second in the Grand Prix was Lone Joergensen and Corinna. © Simon Scully

With four final scores over 70% in the Interpath 4CYTE Grand Prix on Friday, it was no surprise that the lawns and spectator stands were filled to watch this class. Mary Hanna and Calanta shone for a first with a score of 73.696%. This combination continues to improve as this Johnson mare gains more confidence in the arena. In second was Lone Joergensen riding Pauline Carnovale’s Corinna. With a 9.0 for extended trot and a final score of 72.522%, they are sure to keep everyone on their toes. In third was John Thompson on his stallion JHT Chemistry. At only nine years of age this was the youngest horse in the class and finishing with 71.392% made for a very close competition. Fourth was WillingaPark Sky Diamond and Jayden Brown. With three costly mistakes and a total score of 71.065% for their Grand Prix debut, there are certainly big things to come for this pair!

The Interpath 4CYTE Grand Prix Freestyle had John Thompson and JHT Chemistry dancing their way to first with 75.195%. Their passage and piaffe tour was a real highlight with every stride in sync to the beat. Second went to Rozzie Ryan riding Jarrah R for 73.195%, showcasing a technical masterpiece as their freestyle. In third was Dirk Dijkstra riding the timeless 19-year-old stallion AEA Metallic for 70.00%.

The Complete Supply Company Prix St Georges Cup was won by WillingaPark Fusion and Jayden Brown. Fusion is renowned for being a firecracker and sometimes being overwhelmed by the atmosphere, however, expertly ridden by Jayden, this combination portrayed the picture of harmony. With scores of 77%, the team at Willinga Park had more to celebrate after such a successful competition. In second was Caroline Wagner on the Sir Donnerhall mare, Penny Hill Park Sophia, with 74.033%, while Caroline’s student, Brooke Mance, rode Callum Park Freya into third on 69.142%. 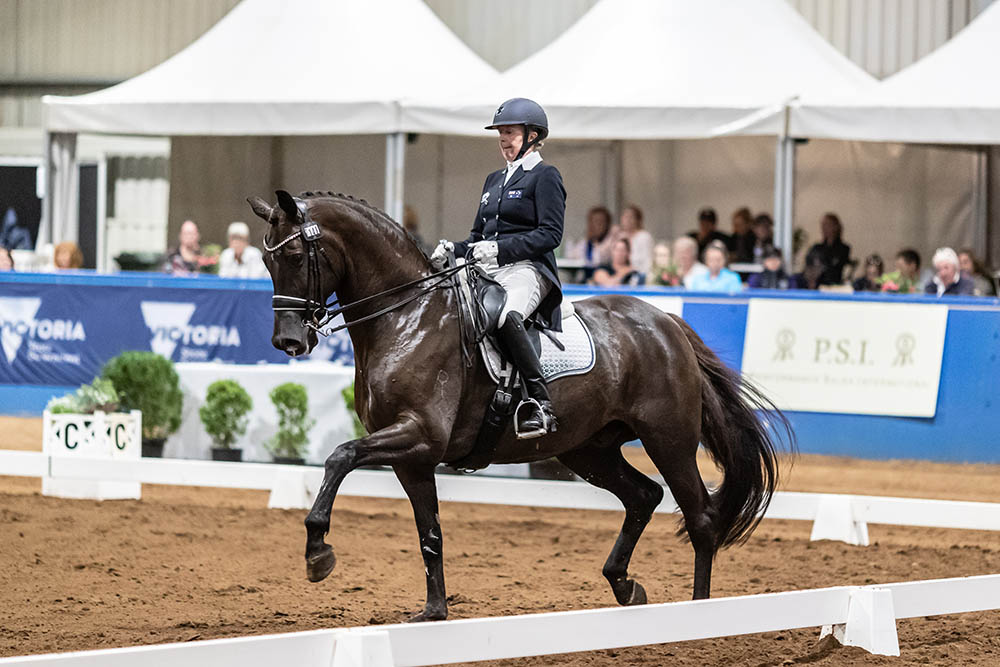 Rozzie Ryan and Jarrah R were second in the Grand Prix Freestyle on a score of 73.195%. © Simon Scully. 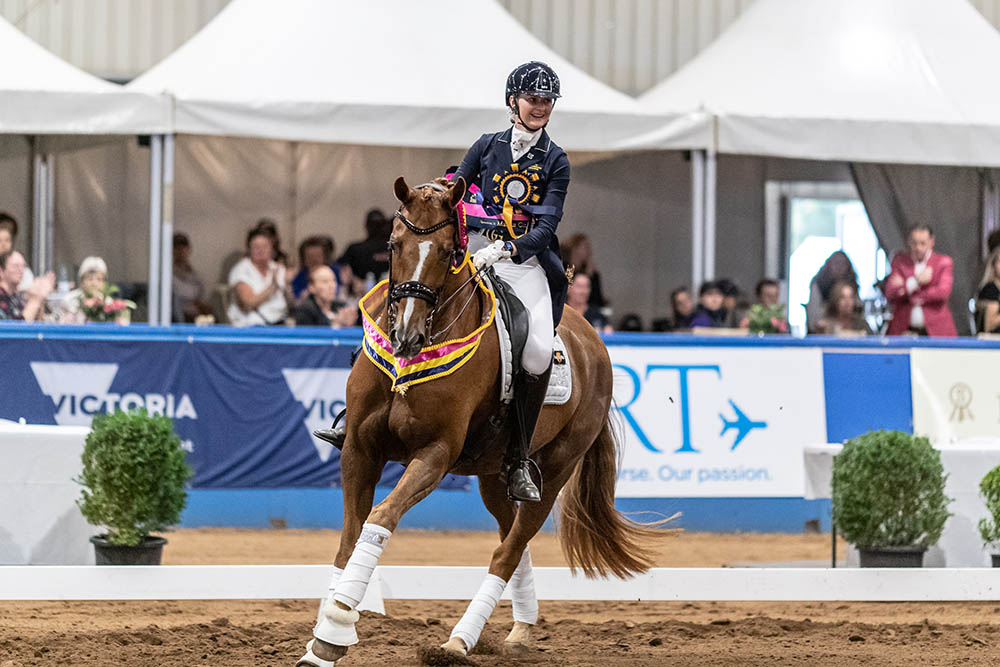 The Marcus Oldham Challenge was an initiative created by FEI 5* judge Susie Hoevenaars for young riders under the age of 25 competing at Prix St Georges level. It is a truly thrilling event where the top three scores from the first round proceed to the second phase, where they then swap mounts with each other and have 10 minutes to familiarise themselves before riding the special test. The winner is the rider with the highest aggregate over the three horses in the second phase.

This year the winner was Alicia Ryan with a total aggregate of 202.353. With three super rides it was a joy to watch! In second was Maddi Growcott with an aggregate of 196.617. Her horse BZ Flynn was awarded the best horse, determined by the horse with the highest aggregate across the three riders. In third was Olivia Gillespie — the youngest rider in the competition — for an initial score of 69.118% on her imported gelding Versace and a final aggregate of 193.285.

Congratulations to the judges and the committee for returning to the community a fantastic event. With judges remarking on the international quality of the riders and horses present, it is a credit to the breeders and owners within Australia and a huge source of entertainment for all spectators and equestrians to enjoy. EQ

Full results from DJWTS can be found here.