When heavy rain lashed the eastern coast of Australia in late March, the floodwaters rose and a horse sanctuary near Newcastle found itself in deep trouble. 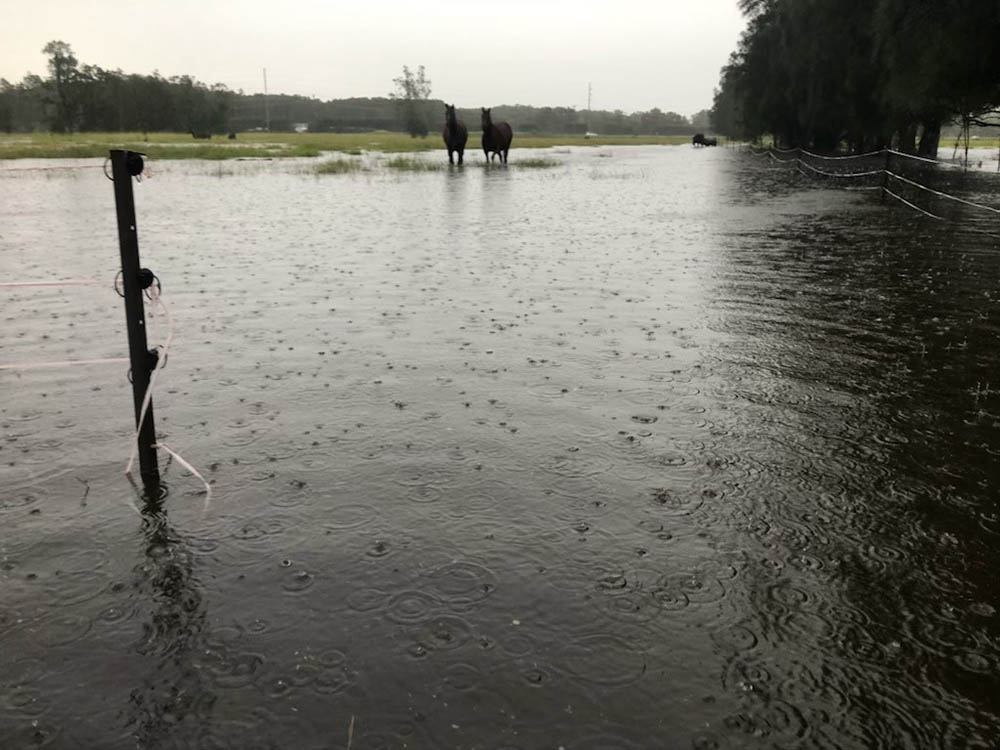 The front paddocks flooded quickly at Hunter Horse Haven, leaving many of the horses stuck until the next morning.
Click here to view the RB Sellars range of casual, corporate and workwear for the whole family

Nestled on the coast at Nelson’s Bay in NSW, Hunter Horse Haven provides a place of safety and recovery for neglected horses that need a home. However, it still resembles more of a swamp than a peaceful place of healing following the devastating floods that inundated the coastline. Even recently, 22 horses from its herd were still stranded atop a small hill, surrounded by murky but now slowly receding floodwater.

Founder of Hunter Horse Haven, Debbie Barber, says the rain wouldn’t stop falling. “It started with torrential rain, lightning, thunder… the whole caboodle. The rain just didn’t stop for five days. And I was thinking, ‘please stop!’ The horses were just standing in the paddock shivering even when they’d been rugged with winter coats, because the rain was just so torrential – nonstop day and night.”

Spread across more than 80 acres, the sanctuary keeps the majority of its herd in four main paddocks at the front of the property. “It was just before midnight that I saw the last of the front paddocks starting to fill,” says Debbie. “I was out there in the dark in my four-wheel-drive with the headlights on, monitoring the horses and the fences because things were getting stuck to them and pushing the fences over. But the water was even starting to go over the bonnet of my car.

“The council drain that runs through the property overflowed and was flowing directly into here. That exacerbated everything, and we flooded really quickly,” says Debbie. “I sent a message out at 4am and the volunteers were there at first light and that’s when we got the last of the horses up. But that was so scary.

“The waters were so dangerous. The stormwater coming from the council drain had wood with nails and screws in it. It was just awful the stuff coming through the paddock and the floodwater was covered with spiders and bugs. There were all these spiders running everywhere! And in the end, I told the volunteers ‘don’t come until it’s urgent’ because it was quite dangerous.”

As dawn broke, Debbie and her team of volunteers began moving the horses further back into the property to the only dry ground left on top of a small hill, where they have been trapped for more than a week. “All these horses were standing there shaking and all the little foals were shaking so much they could hardly stand up,” says Debbie. “They were terrified, and you can’t just go to bed and leave them standing in that horrific rain! 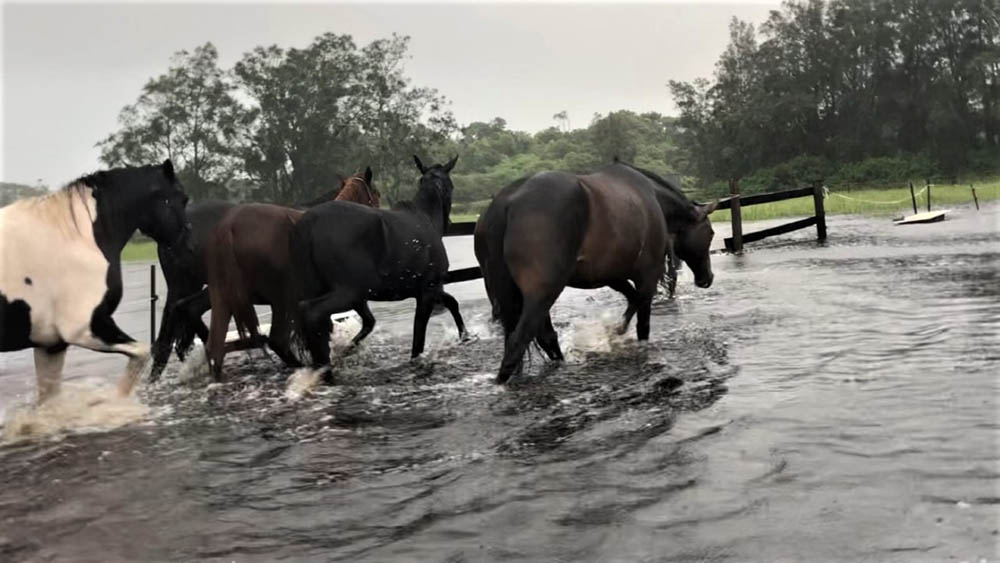 The horses making their way further back into the property to higher ground.

“It started with torrential
rain, lightning, thunder… the whole caboodle.”

“I tried to get a mare and three foals out of one paddock. We had 23 in the front paddocks and we had to move them all back uphill as quickly as possible because it was running so fast that all the fences were taken out. And you couldn’t even see the bathtubs that the horses drink from,” explains Debbie. “The old boy that we have in the stable ended up ankle-deep in water. Someone went and got bales and bales of straw. There was nowhere to drain the water to, so the only thing we could do was put that much straw on the ground that he could stand on it and not be ankle-deep in water.”

Among everything else that the Hunter Horse Haven team had to worry about, Debbie says they were concerned about all the horses being confined together with no way to separate them. “It’s four different paddocks of horses so we’ve had to combine them,” she explains. “At first, I was extremely concerned that there would be fights and so forth, but it’s like the horses knew. And in the torrential rain, they just stood on the hill, no fights or anything… just trying to get through the weather the same as everyone else.” 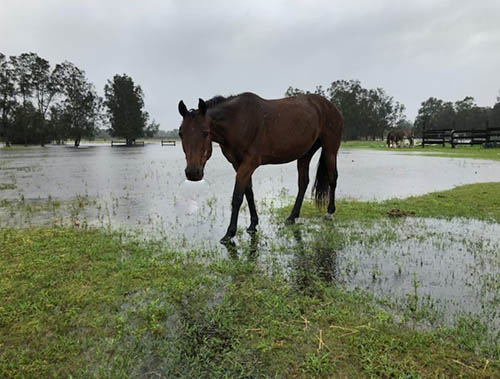 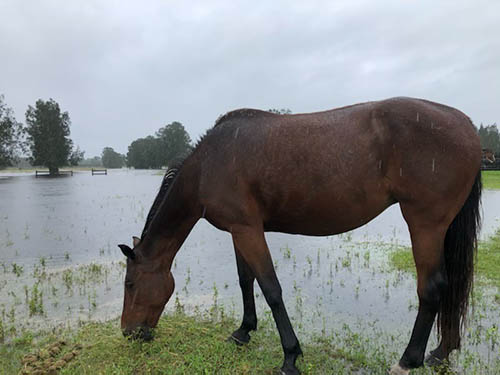 A – Within a matter of hours, the horses had no pasture left to eat. B – One of the mares, Missy, making the most of the last grass left untouched by the floodwater.

“All the little foals were shaking
so much they could hardly stand up.” 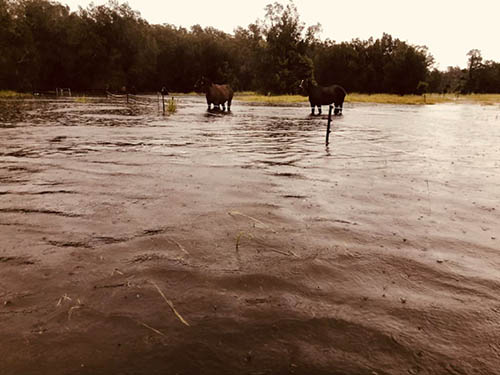 Two horses wait to be lead out of the floodwater.

“You can’t just go to bed
and leave them standing in that horrific rain!” 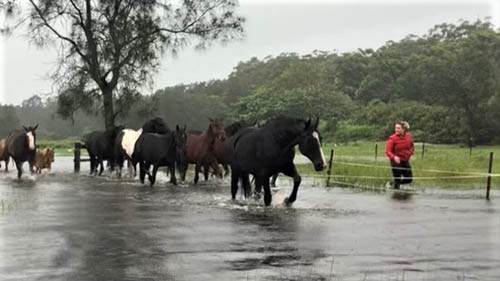 The team of volunteers helped move the herd of 22 horses to the small hill.

IN THE WAKE OF THE FLOOD

As the rain eased in the days following the initial flooding, Debbie and her team began to examine the damage done by the raging waters and formulate a plan for the coming weeks. “We’ve been trying to get hay donated because there’s not enough pasture on the hill,” explains Debbie. “The waters have started to recede a little and they can come down the hill a little way, but that pasture isn’t palatable. It’s just got floodwater refuse all over it. At the moment, we’re feeding out 20 bales a day for the 22 horses on the hill, and then we have the four little foals locked up, and the other four horses in stable yards.”

Within days of putting out a cry for help on Facebook, a truckload of hay arrived at the haven. Debbie says she was utterly overwhelmed by the generosity of the community. “Someone purchased the hay and then Hunter River Hay transported out here,” she says. “The driver, Glenn, was just fantastic. He helped us for all those hours. He had to park the truck out the front because he couldn’t bring it into the property. And I had to use my four-wheel-drive and trailer on the lowest gear to ferry the hay into the property and we were doing that for four hours.”

However, Debbie says the damage inflicted on the paddocks was horrific. “We were looking at the other paddocks as the water has started to recede and it is just heartbreaking. I’ve put my life and soul into this pasture. Normally we have fantastic pasture — we could probably hold four or five times that number of horses but we don’t so it doesn’t get overgrazed. But looking at what’s happened as the floodwater recedes, what it’s done, the impact on the paddocks is just devastating. I just stood there and couldn’t believe it.

“Every minute not spent feeding, or caring, or training the horses, I spend on paddock maintenance. We have six different kinds of great pasture with a great variety and it’s super nutritional. But now it’s just mud.” 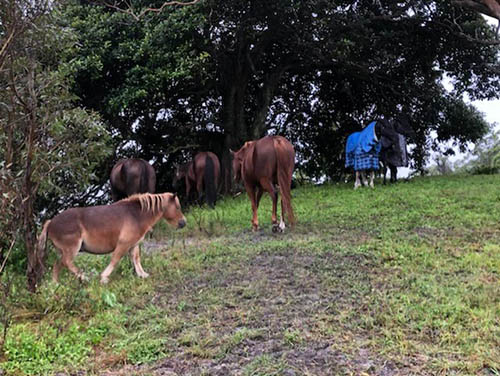 The little herd has been taking refuge on a small hill for the past week. 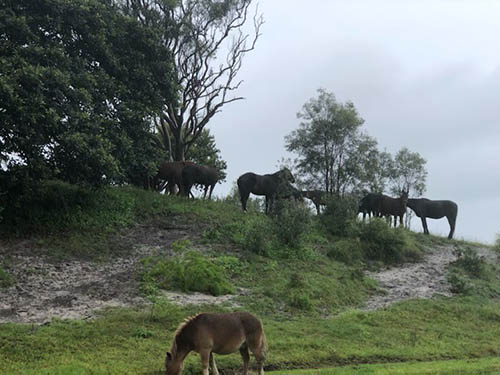 22 of the sanctury's 30 horses have been stuck on top of the hill since the flooding began. 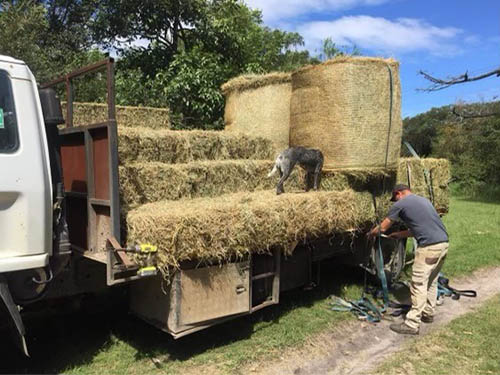 The Haven was overjoyed to receive a load of hay for the horses. 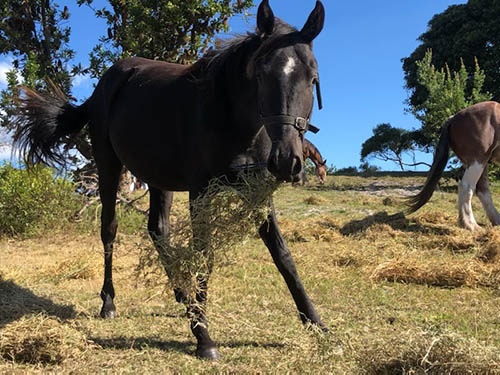 A happy, hungry hippo - the horses were also very happy to receive the donation of hay. 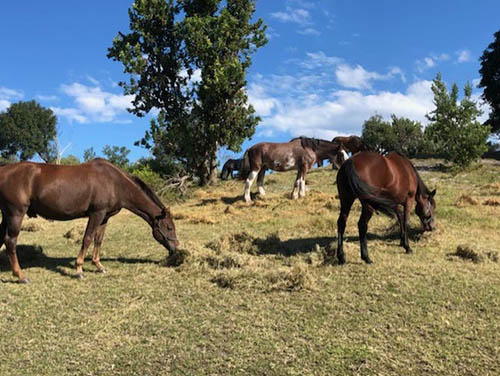 A clear sky after days of rain, but the horses are surrounded by floodwater.

The paddocks weren’t the only places where the floodwaters left their mark. Several of the horses were injured. “We had a few horses injured too from things in the water,” says Debbie. “And then we have a couple lame with bruised soles. And because of the torrential rain that just went nonstop, their skin has gone all scabby. So we’ve been brushing it out, and oiling it, creaming it, but we’ve got 30 horses to treat. And the only one who hasn’t got that is a brumby that we received two years ago and was trapped at Mount Kosciuszko.”

Only two days before the rain began, the Hunter Horse Haven took in two emaciated mares who also were then caught up in the flooding. “One of the emaciated mares has very bad itch and she’s also got an injury on her face,” says Debbie. “The volunteers have been here helping to treat them. They did great job. They’re just amazing.

“The community’s been fantastic. We had an organisation called Give Easy run a fundraiser for us, which was amazing. And the local PetQuarters at Taylor’s Beach have kindly been accepting donations for us for horse rugs and hay, and products like Sudocrem and Betadine. That support is so important and amazing. We would have been in big trouble without the community’s help.”

HAVEN FOR HUMANS TOO

Debbie says she began Hunter Horse Haven two years ago to care for neglected horses. She has since found that for some volunteers, the horses help them as much as they help the horses. “I’ve worked with horses in rehab for 40 years. I was basically doing it myself and then people started approaching me wanting to help. Some were people in need… who wanted an outing or to be able to escape their circumstances, and people suffering from depression. We’re the largest charitable horse rescue in New South Wales and have 30 horses at the moment. It means so much to our volunteers to be able to come here and help the horses, and it’s like they help each other.”

The next challenge will be to clear the paddocks of dangerous debris carried by the floodwaters and to reconstruct the fences. “We’ve put the call out for volunteers to help with the fences and it’s going to take weeks to fix them all.”

You can read more about Hunter Horse Haven in the September 2020 issue of Equestrian Life.