HOW THE AUSSIES STACK UP FOR TOKYO

YOU ASK, WHO IS LYNDA DE GRUCHY?

A KNIGHT’S TALE
DOWN UNDER

THE MYSTERY OF EQUINE SHIVERS

THE INS & OUTS OF BITLESS BRIDLES

FURY, A STALLION WITH STANDARDS

GET DOWN & DIRTY FOR A BETTER ENVIRONMENT

WILL MY HORSE MAKE IT TO GRAND PRIX?

BY ROGER FITZHARDINGE
content placeholder
© The J’taime.
Previous
Next

“I didn’t really like showjumping at first,” Sally Simmonds admits, laughing as she reminisces about her earliest years in the saddle. Fast forward to 2021, and this rising star of the Australian showjumping scene could not be more enthusiastic about the sport she loves, the horses she rides, or the family that supports her. 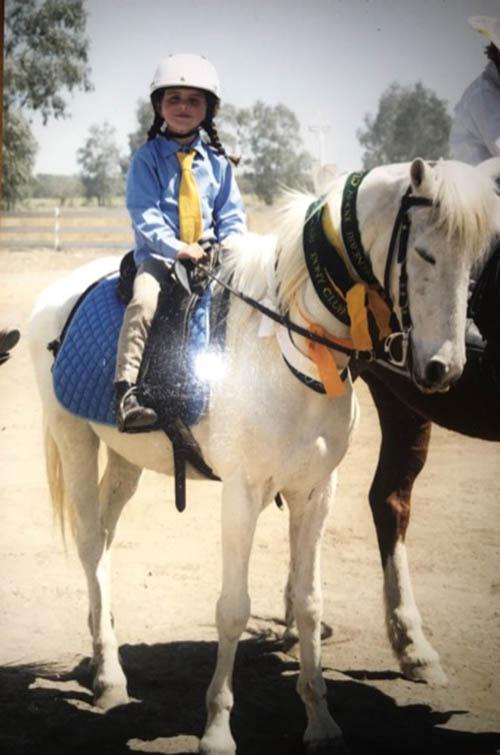 Sally Simmonds in the early days with her pony Silver.
Click here to find out more about targeted nutrition for performance and recovery.

“There’s been a few busters!”

A love of horses runs in Sally Simmonds’ blood. Hailing from Bourke in western New South Wales, her parents Peter and Tracey Simmonds were both champions of the Australian rodeo scene in their respective sports of bronc riding and barrel racing, yet as Sally explains, rodeo was not a path that her parents wished for their children to follow. Once synonymous with success on the rodeo circuit, the Simmonds family name is now also leaving its mark on both national and international showjumping circles thanks to the success both Sally and her older brother Clay have enjoyed in the ring over the past five years.

“Our parents really didn’t want us to rodeo because there’s a lot of travelling involved. However, Clay did ride steers, and we did a bit of barrel racing and a lot of sporting, things like that. I also did a lot of hacking and showed Stock Horses, and that was all so much fun. It really taught us to ride, and our parents are great horse people who taught us good basic skills. Then we sort of got pushed into showjumping,” Sally explains.

The occasional buster aside, it’s fair to say that Sally, now 19, hasn’t looked back since turning her focus to showjumping. By the age of 15 she was winning Junior Championship titles and in 2019 she was almost unbeatable in every Junior class she contested, winning the Junior Title at the Australian Championships with Oaks Chifley and finishing second with Chio MS. In addition to multiple Junior Championship victories, Sally was also making her presence felt in Senior, Young Rider, and Young Horse Classes, regularly notching up wins and placings despite being a 17-year-old mounted predominantly on horses she had produced herself.

The year 2020 was set to be an exciting one, with international showjumping opportunities on the cards. True to plan, Sally headed to New Zealand in January as a member of the Australian Young Rider team, competing on borrowed horses in the Trans-Tasman Challenge. Not long after, Sally followed in her brother Clay’s footsteps, heading to Europe with plans to compete on the global stage.

“I think I was there for eight days!” Sally laughs, as she looks back at how the Covid-19 pandemic thwarted her plans and cut short her adventure. Always upbeat, Sally reflects on how all was not lost; back at home in Bourke with international plans on hold, she continued to develop her promising team of jumpers, competing when restrictions allowed. A plan developed to travel to Europe in 2021 instead.

“I was actually going to fly Chio MS over there at the start of this year and travel to competitions in Spain and whatnot,” Sally explains. “But that all got cancelled, which is a relief looking back, because then the equine herpesvirus (EHV-1) broke out in Europe and that wouldn’t have been much fun!” 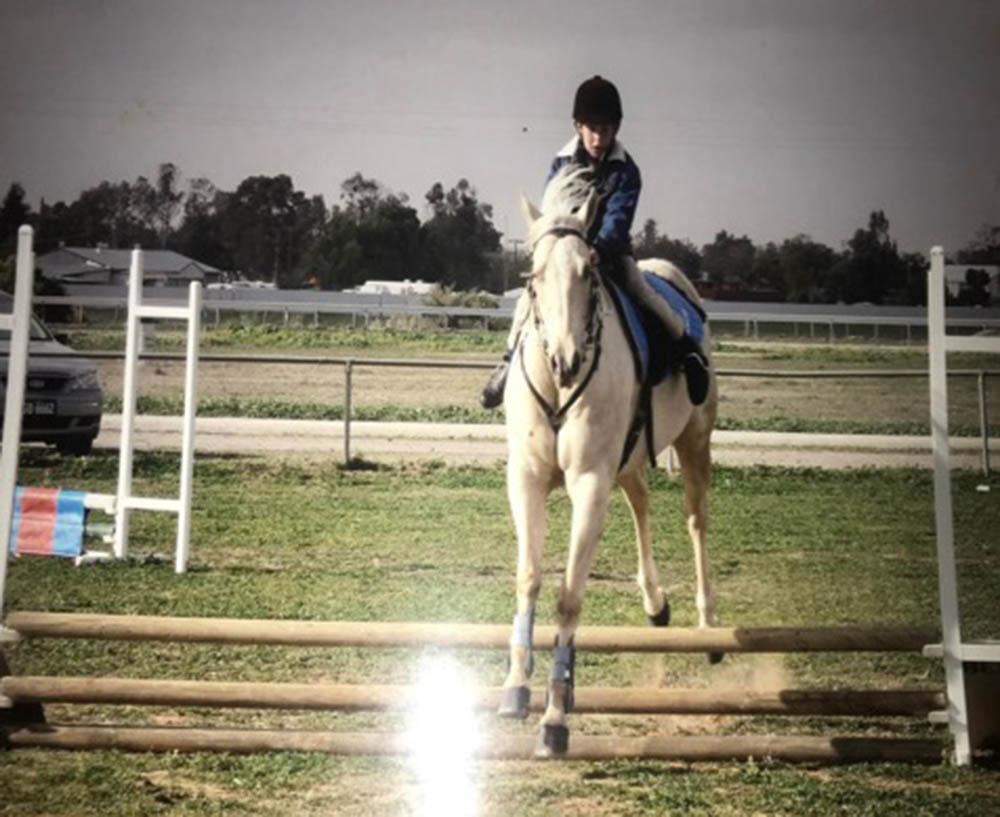 With rodeo off the table, Sally took up show jumping as a child.

“We’re still a work in progress!” 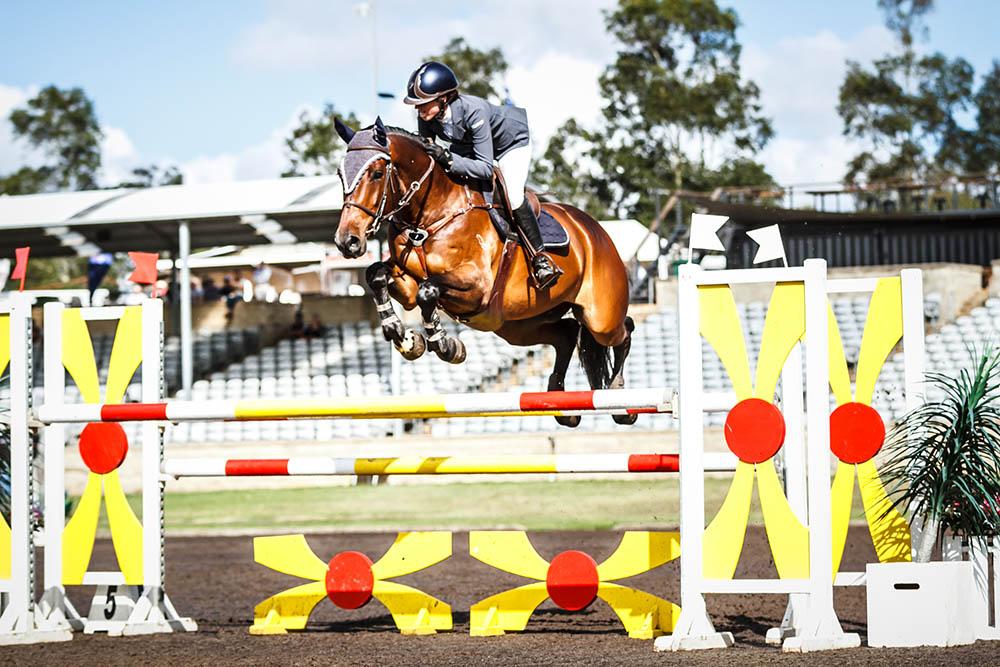 Sally and Oaks Chifley, who has been sold to NZ.

While Sally’s brother Clay has recently headed back to Europe to be based with Hilary Scott in Valkenswaard, taking the promising young Chacco Blue gelding Hillbreeze Chacco De Lux with him, Sally has no complaints about remaining in Australia for the time being. Modest and down to earth, she’s enjoying competing against other Young Riders on the Queensland run of shows, and has picked up plenty of wins along the way. So far, 2021 has been a brilliant year for Sally and Chio MS; after winning the Young Rider Championship at Tamworth in February, they have now won the Young Rider Championships at both Nambour’s Sunshine Coast Agricultural Show and Gatton’s World Cup Show in June.

“I couldn’t be happier with him at the moment,” Sally enthuses, describing the Chacco Silver/Dollar De La Pierre gelding, bred by Matawhio Sport Horses, as one of the most exciting horses she’s had the chance to ride. “Dad and I went over and picked him up in New Zealand a few years ago as a six-year-old and he just keeps getting better and better, he’s really living up to his breeding!”

Having sold Oaks Chifley – the Chacco Blue gelding with which she enjoyed 15 consecutive wins in 2019 including numerous Junior titles – to New Zealand at the end of 2020, Sally has now welcomed some new young horses to her team. Oaks Kingfisher, by Kannan, is proving to be an extremely talented and competitive young horse, recently stepping up to compete in his first 1.25m classes. During her Queensland trip, Sally has also added Vakarra Euclase to her team; purchased from Kirstie Ansell, the promising youngster by Emerald will have his first competition starts with Sally in the saddle later this year.

In addition, Sally is enjoying the opportunity to ride some bigger tracks with Oaks Charleville, a 2011 Charlemagne Ego Z gelding who was originally campaigned by Clay before Sally took on the ride in 2019. The pair are currently competing at Mini Prix level, aiming towards a World Cup start later in the year. 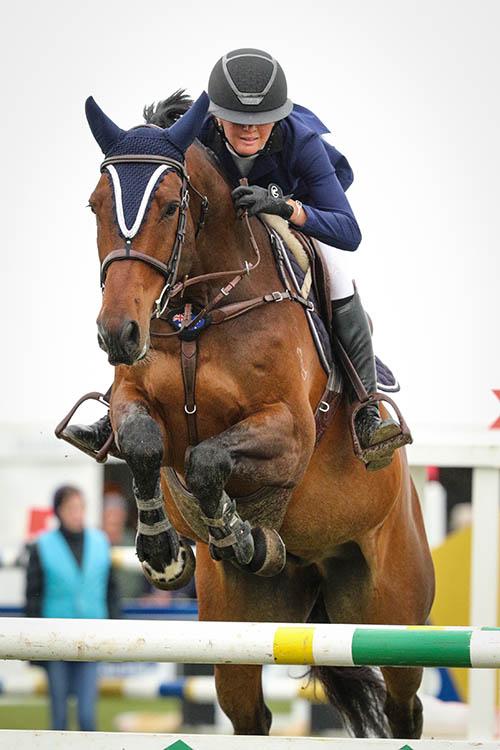 Sally Simmonds on her way to winning the Australian Junior Championship Final in 2019 with Oaks Chifley. © Michelle Terlato.

“We’re still a work in progress! He’s a really nice horse but not the easiest, and I’m still learning which buttons to press and working on getting things right. He’s been really good for me to learn to ride the bigger tracks on, because I’ve never had an older, brave, experienced horse. The others I’ve all had from scratch and you’re teaching them as you go,” Sally explains. “We’re working towards our first World Cup start, but I just don’t want to go into my first World Cup not feeling 100%. I want to go in there and have eight faults or less, I don’t want to have a cricket score. We’re just not ready yet, but in a couple more months I reckon I’ll definitely face up to a World Cup start.”

After more than a month in Queensland, Sally and her father will spend July at home in Bourke before hitting the road again for more shows in Queensland and NSW as the year progresses. For Sally, the prospect of heading home to Bourke is far from relaxing, however, she’s looking forward to it nonetheless. Time at home means an opportunity to work within the family business; Peter and Tracey Simmonds own and run Kidman’s Camp, one of Australia’s premier inland caravan and cabin parks.

“It’s flat-out at the moment, I feel very guilty leaving Mum there to deal with it all!” says Sally. “I help out whenever I can. Clay and Dad are normally on the building side of things and Mum and I are usually in the office. Fortunately, she’s got managers there helping her now, because 120 vans come in each night and there are also 20 or more cabins full each night.” 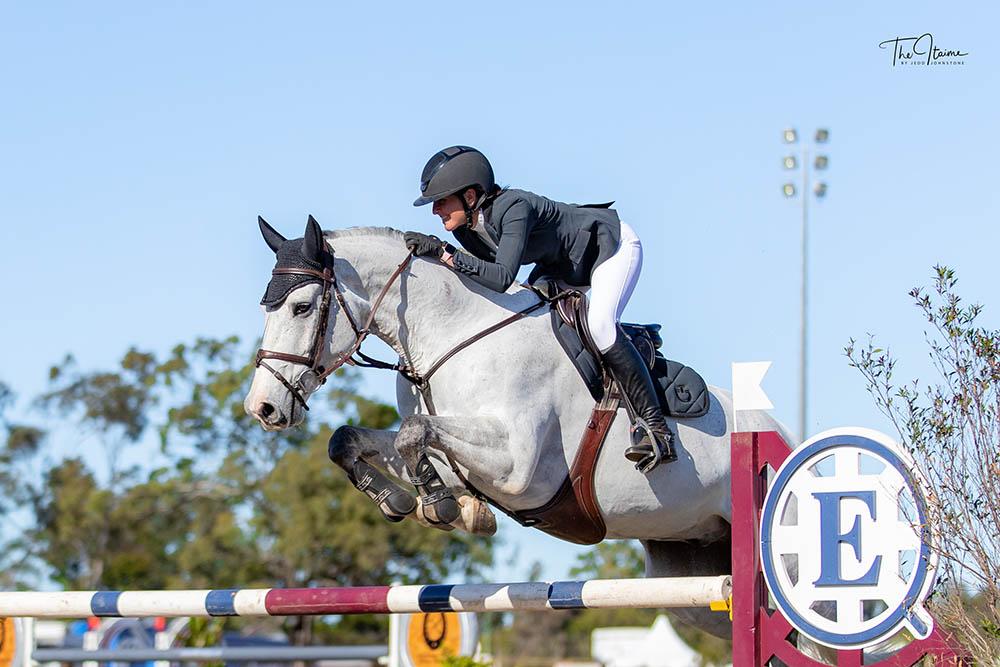 When Sally speaks about her family, it’s with much respect and admiration. It’s clear that the Simmonds family share a common bond that extends far beyond their love of horses; they all have incredible work ethics, competitive natures, and a refusal to let pesky things like the tyranny of distance or global pandemics get in the way of their goals and plans. Many would see a home base in outback Bourke as being incongruous with an elite showjumping program with international elements, yet the Simmonds family have a knack of making things happen. There’s no doubt that like her brother Clay, Sally will have her chance to compete in Europe when the timing is right, but for now, she’s relaxed and happy about being in Australia.

“I’ve got some really nice young ones at home, so I’m happy just poking along around shows out here, getting a nice strong team going, and then maybe later on in the year I’ll take one over to Europe to sell or something like that,” Sally muses, making the process sound about as simple as preparing for a trip to the local show.

“It’s very different over in Europe, and it’s not easy to adapt and change, but you’ve got to do it. I can definitely see myself over there again, but I think I’d have to come home one day — though I can’t stay in Bourke forever,” Sally explains, adding: “I’ve got a really nice young horse in Europe. Clay’s got a colt and I’ve got a filly, they’re both extremely well bred. Clay broke them in when he was last over there, and now they’ve just gone to a trainer over there, which is exciting.”

Sally has already achieved so much in the sport of showjumping at a young age – and through hard work and determination, now finds herself surrounded by outstanding horses and seemingly endless opportunities – it’s exciting to consider what she could achieve both in Australia and overseas in the coming decades. Yet Sally remains patient, focused and humble; it’s clear that while her dreams are big, the future is no distraction and her well-grounded attitude and upbringing allows her to both live in – and enjoy – the moment. Asked what she’s grateful for, Sally is quick to tell you about her family, her community, and her local sponsor, Furneys Stockfeeds. Even her heroes are those she’s known all her life.

“My brother Clay really has been a very big role model for me, my whole life. He rode motocross bikes until he was in his teens, he’s only been riding competitively for about five years! He sort of went from nothing to something very quickly. Seeing that, and being behind the scenes, being with him in the warm-ups for those World Cup starts and watching how he handles everything was really inspiring.”

Geographically, Bourke may be a long way from the top jumping venues in Europe and even Australia, yet the height of the jumps and the distances between them are the same the world over. For a prodigious talent with a winning attitude such as Sally, the long trips that lie ahead in the journey to the top of sport will be no greater obstacle than a simple cross rail. EQ