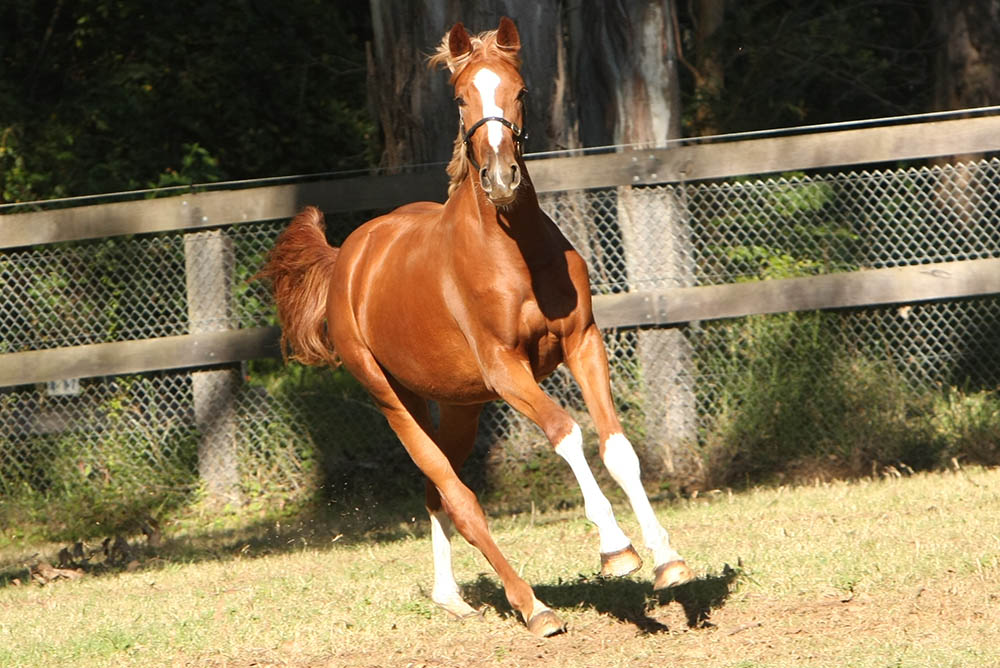 Some horses have a natural ability and will make flying changes in the paddock. © Roger Fitzhardinge.
Click here to find out more about targeted nutrition for performance and recovery.

Flying changes enter the picture at Medium level dressage, but depending on the horse, you may start to train them sooner. As Roger explains, the flying change journey is different for every horse — some love it and some loathe it — and therefore there’s no one-size-fits-all approach.

WHEN DO YOU START TRAINING FLYING CHANGES?

“There is no real definitive answer, as it depends on the horse, its character, its temperament and its attitude towards being trained,” says Roger. “Every horse’s ability to wait or to be forward or to be sideways is different — and therefore so is its ability to make flying changes.”

Roger explains that before making flying changes, the horse has to have a good understanding of a canter left lead and a canter right lead, and in his experience, spending plenty of time teaching a horse to do counter canter is beneficial. “The ability to make counter canter will come from the rider creating a good balance and initially riding a very clear and easy line, where a horse doesn’t feel threatened to lose balance. It’s about positioning and riding lines within the arena that give your horse every chance to make turns without changing leg.”

SOME HORSES HAVE NATURAL ABILITY…

“Horses with the natural ability to make flying changes, I would be prepared to wait a little bit longer before you actively start training them; don’t encourage the flying changes too much early on if they find them easy to do,” says Roger.

That being said, Roger notes that if a horse has a natural instinct to make flying changes when you change direction, he never discourages that. “It’s a handy thing to have a horse with the natural inclination to make flying changes and it’s always a welcome benefit. It’s good to have a horse that wants to anticipate a change. And all you have to do then is quell that a little for those lower level tests.” 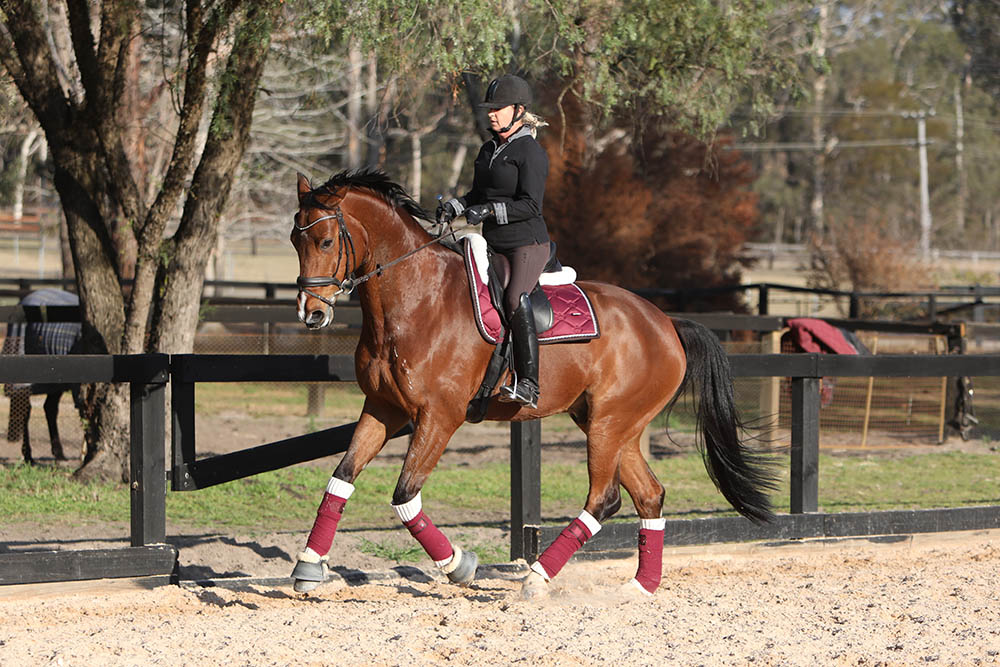 Before even thinking about flying changes, you need to develop a good canter first. © Roger Fitzhardinge. 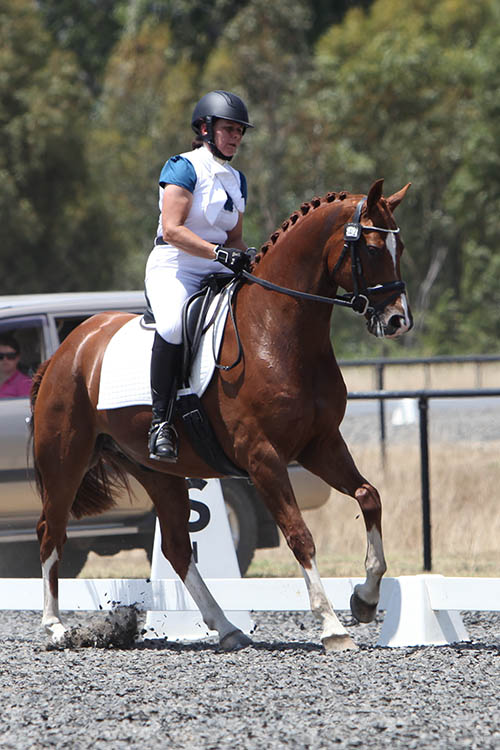 Spending plenty of time teaching a horse to do counter canter before training the flying change is beneficial. © Roger Fitzhardinge.

…WHILE OTHERS CAN FIND IT HARD

Just as some horses find flying changes a breeze, others would prefer to stay in counter canter for the rest of their lives.

“One of the most important things before you make a flying change with the horse that finds it difficult, and even ones that do find it easy, is to have a horse that is adjustable, not only forward and back but also sideways. You must be able to position the shoulders in front of the quarters on either rein, and you need to be able to collect the horse in the one canter lead and position it for the opposite direction before making the aid for the flying change.

Roger believes that with the tricky ones you have to work with them a little, rather than against them: “If a horse that’s normally difficult does a flying change when you don’t want it to, or goes into counter canter or on the wrong lead, just turn towards the direction they’ve made the change and pretend it was their idea for a while.”

With horses that find the movement hard, it’s also important not to over-collect. “From my experience, by over-collecting the canter we can actually tend to shut down the hind leg a little bit. In the beginning, with a horse that’s difficult to make flying changes, you need to have a feeling of having an ‘airy’ hind leg, like it’s going to go disunited or have a little pigroot. You need to keep the hind legs extremely active and ensure the horse is not too afraid to make a flying change.

“Make certain you get the horse very adjustable and not afraid to move its legs around. Don’t be afraid about your horse going disunited; if your horse finds flying changes hard and does go disunited when you’re collecting, if you can get the hind leg to change then you just need to get the front leg to change. You just need to get them prepared to use their legs and change them about and make a mistake and go disunited… you know all those things eventually will come into line to make a true flying change.”

AN EXERCISE TO TRAIN THE FLYING CHANGE

“You do that several times. And then, when the horse is prepared to wait and let you adjust its balance and position so the shoulders are in the correct way, instead of changing through walk you can just apply the aid for a flying change. Flying changes are just a simple change through walk, without walking!” 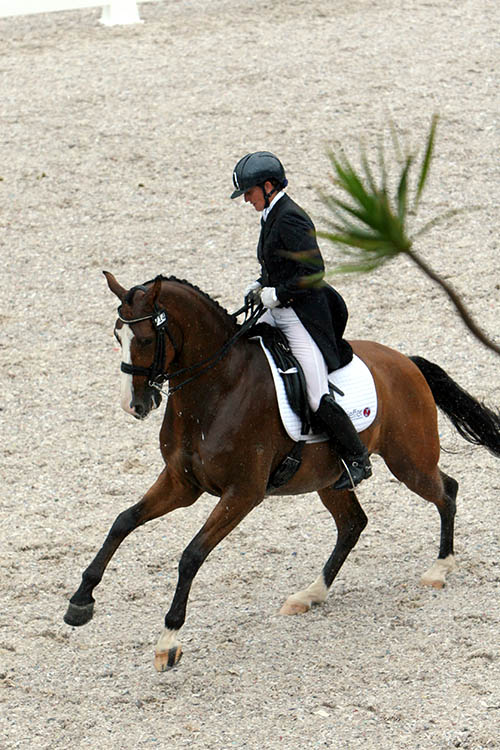 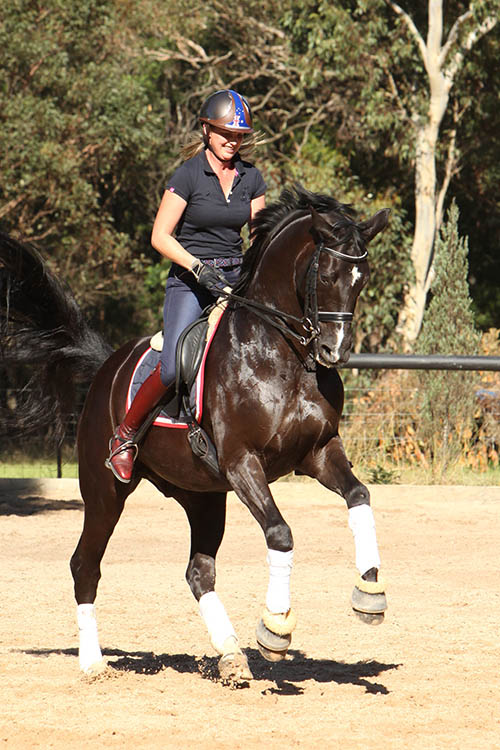 The joy of making a truly great change! © Roger Fitzhardinge. 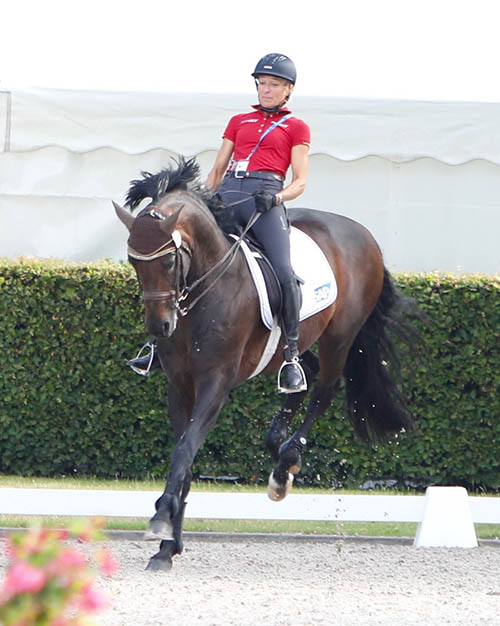 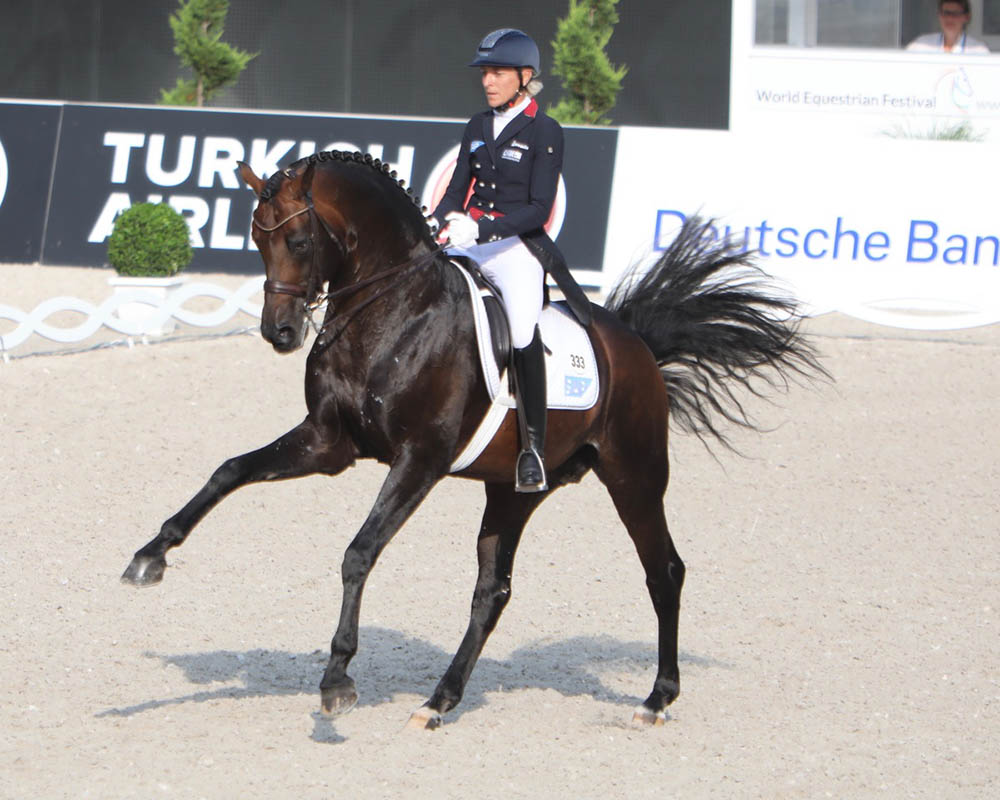 A. It's not always perfect, so don't think the experts never make the odd bad change. B. When it's good, it's great. © Roger Fitzhardinge. 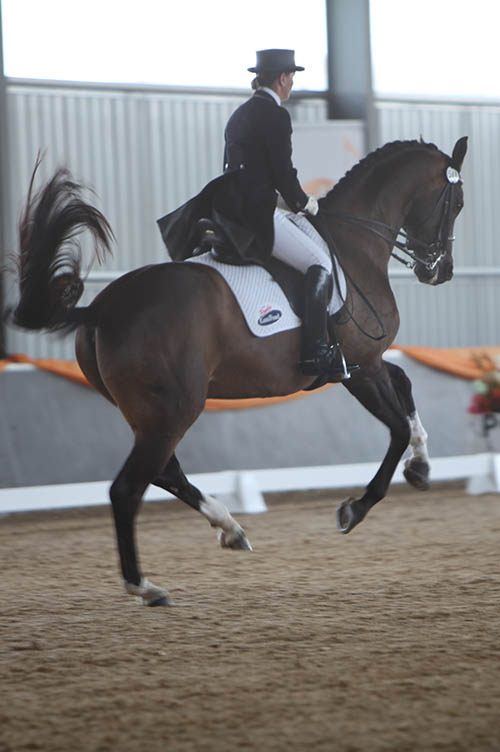 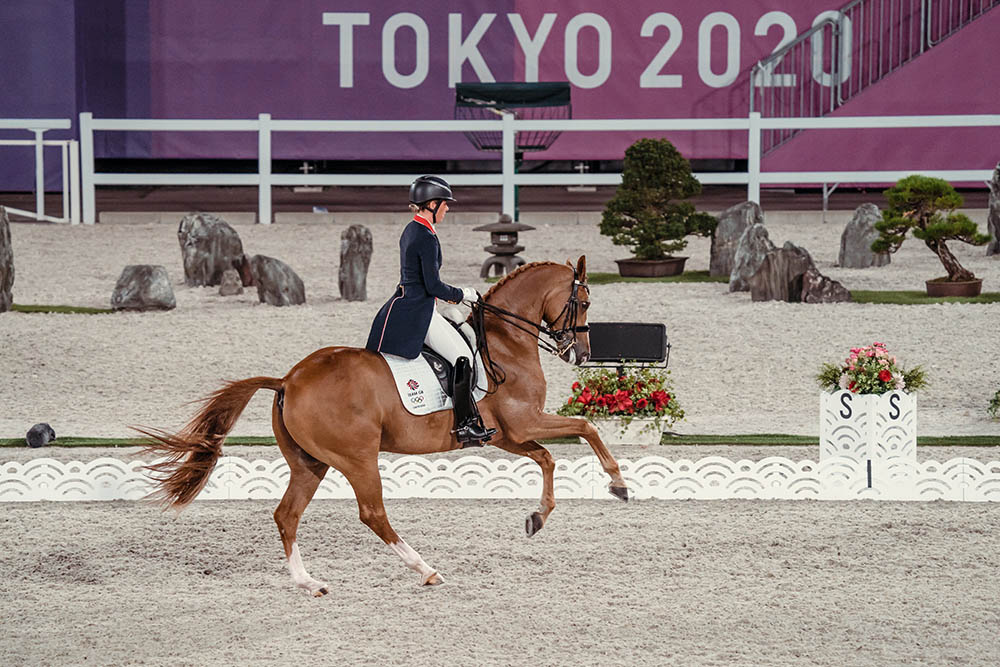 Charlotte Dujardin and Gio showing a flying change at Tokyo 2020, where they finished with team and individual bronze medals. © FEI/Christophe Taniere.

There are a number of common problems people have when training flying changes, but there are ways to work around them.

Firstly, as Roger, mentions earlier, do not chastise horses for making flying changes by themselves. “If during the counter canter, for example, they do happen to make a flying change, it’s not the time to chastise them or discipline them; it’s just a time to re-establish the canter lead that you’re on.

“One has to be careful that a horse doesn’t feel that once it’s in that one canter lead, it doesn’t have any option to change from one lead to another. This is why if you ride persistently in counter canter and chastise a horse if it makes a flying change, it eventually decides it’s just not going to do anything in case it gets into trouble.”

Don’t be too forward

One of the biggest mistakes Roger sees with flying changes is that people ride them too forward: “It does not need to be more forward than the canter that you are in. So, for instance, if you are cantering at 10km/h, then you make the flying change at 10 km/h and you land at 10km/h.

“When you first make changes and you put your leg on to make the change, often a horse will interpret that it’s time to get faster and just canter away rather than make the change, so you’ve got to have a very good half-halt that gets the horse to wait and bounce a little higher in the air so you can make the change and stay in the same speed. Don’t ever chase the horse forward after the change unless, of course, the horse is very backward.

In the early stages of learning flying changes, horses may start popping them in during the half-pass. “Don’t be concerned if when you start flying changes, as soon as you start doing half-passes they want to put changes in. Don’t ask me why they do that, they just do. It’s a very common problem and something that happens, and it goes away. Just be persistent; come back to walk after the half-pass, pick up the canter lead again and continue.”

BE PATIENT, BE CONSISTENT

Training flying changes can be great fun. Just remember that no two horses are the same; some find flying changes easy and natural, others don’t. Some are better learning it earlier, some later. Be patient, be consistent — and keep in mind that we learn by making mistakes, as do our horses! EQ

Will My Horse Make it to Grand Prix? – by Roger Fitzhardinge (Equestrian Life, July 2021)