What? Madonna – 63? Surely not? Yes indeed, the first lady of pop music turns 63 this month, but she doesn’t care in the slightest and will still go on singing and teasing for many more years to come. And she plans to go on riding horses until she gets it right. As far as she is concerned, in the saddle she is still Like a Virgin. 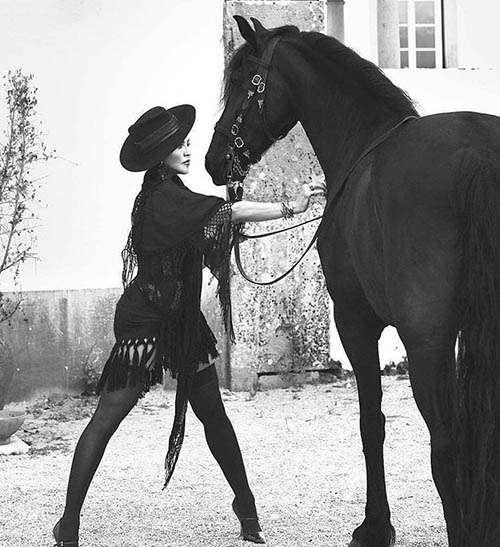 Singing sensation Madonna has long had a love of horses. © EMG Ltd.
Click here to learn more about Racing Victoria's Off The Track program and initiatives. 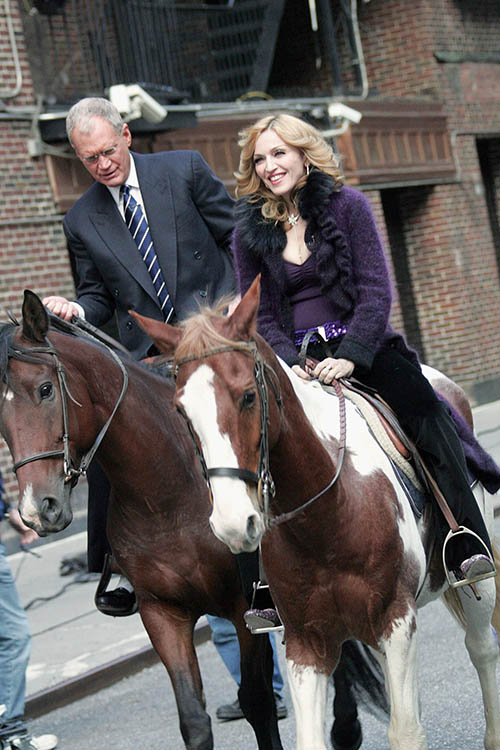 Madonna riding with David Letterman in 2005. (Equestrian Life does not condone riding without a helmet). © EMG Ltd.

“I have always wanted to go
another step and another…”

Defiantly, Madonna believes that age has nothing to do with personality or performance and she plans to go on entertaining us and living life to the full for as long as possible.

“I don’t think about age or years,” she says. “What is a birthday? Just another day for some fun and nice things and the next day everything goes back to normal. There are moments when I can’t believe I’m as old as I am but I am feeling good physically, perhaps even better than I did, say, 10 years ago, so life goes on.”

What has that to do with horses? Well, despite breaking more bones than promises, Madonna just loves horses and riding and cannot understand why she did not get involved much earlier in life.

“I was in my 40s when I first started to really ride,” she says. “I had always liked horses and had pony rides as a little girl but nothing like the real thing. Sometimes your career dictates what you do and somehow I never got round to actually getting on into the saddle to see if I could enjoy it as much as everyone else seemed to.

“I always liked watching showjumping and eventing and dressage as well as polo – why isn’t that an Olympic event, by the way? I liked horse racing too, just to see how great the horses were.

“It was Guy (Ritchie) who encouraged me to get onto a horse for the first time. Yeah, I was nervous; watching other people is one thing but doing it yourself is just so different. I loved it, though I thought I was fit until I had to get off the horse. My legs were like jelly and I thought the ground was going to swallow me up. Never for a minute did I think that it was too late in life for me to start riding.

“I have never been the sort of person that thinks that you have to plan your life like it is some kind of timetable. When I am 20 I must be like this, when I am 30 I must be like that and when I am 60 I must get some cosy slippers. That’s not me at all. Maybe it works for some people but definitely not for me. So I didn’t have a problem with starting to ride when I was nearer 50 than 40.”

Who could argue? Madonna has been pushing back the boundaries ever since she first arrived in the public eye and still rides the crest of a wave. Just announced is she’s giving a concert at any venue you came to name and the tickets will be gone in minutes.

Madonna Louise Ciccone was born in Bay City, Michigan on 16 August, 1958, to an international parenting – her father’s parents were Italian emigrants while her mother was of French-Canadian descent. Her father was an engineer designer in the motor trade. There were already two sons in the family when she was born and another brother and two sisters came later.

What was she going to do with her life? Her mother had died while she was still quite young and she felt the loss tremendously. “I got on with my studies,” Madonna explains. “I didn’t really want a social life and I was quite a loner really. I was close to my dad, and when you lose your mother you have a constant fear that you might lose your dad too. I wasn’t into fashions and make-up or anything like that. I did have an ambition though: I wanted to be someone and the desire just grew and grew.

“I didn’t feel as if I was going anywhere at college so I dropped out and decided that New York was the place for me. Even though I was not sure of my route, I had a dream. I wanted to be a big star. New York just seemed to be the right place, but it was a big deal for me. I had never even been in a cab before I arrived in New York.

In 1984, out came Like A Virgin and now Madonna was an international star. “I still didn’t see it as a pinnacle,” she says. “It was great, of course, but still only part of the journey. I have always wanted to go another step and another, whether in the studio or on stage. I wanted to make sure that people were getting something new and something all the time. There was never a one-time-for-all formula. To keep the audiences and fans interested I had to keep myself interested and that meant breaking new barriers all the time. 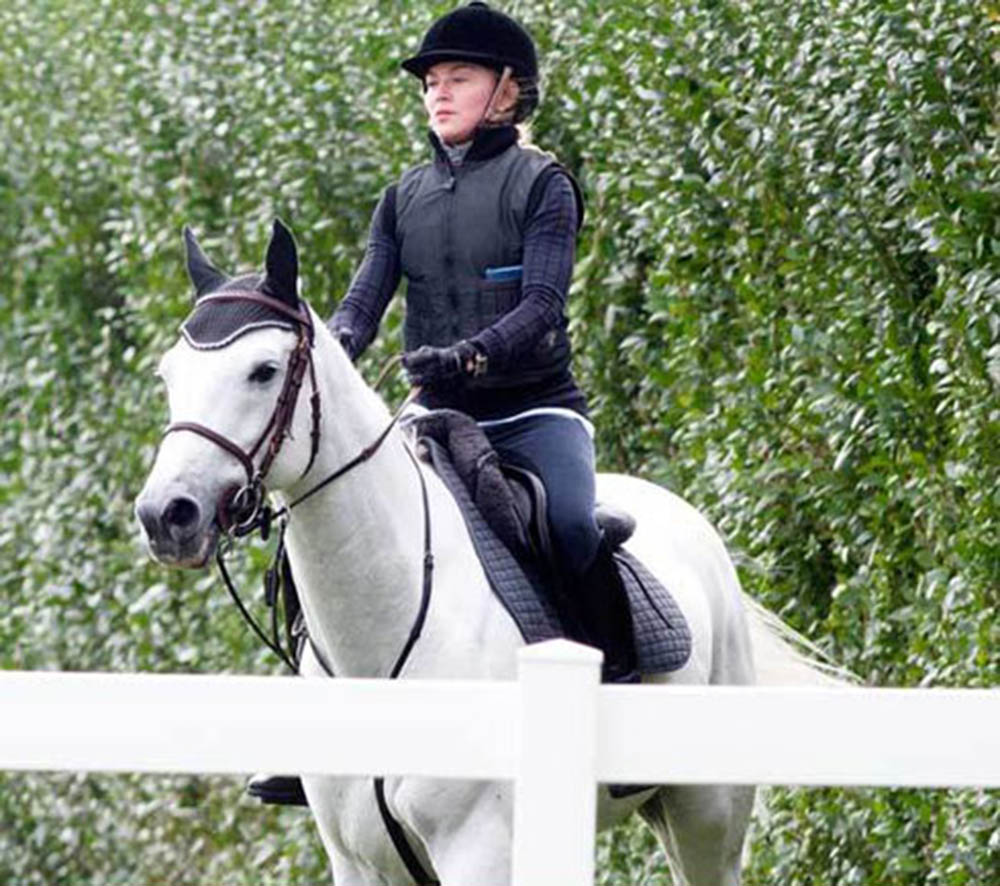 Madonna was in her 40s when she first started to really ride. © EMG Ltd.

“I think that is why I took up riding at a time when many people are stopping doing very much physically. There is no doubt that the best time to get into riding is when you are young, but just because you are not that doesn’t mean that you are banned from trying.

“Anyone can achieve anything if they simply know what they want and work hard for it. People often don’t really know what they want so how can they aim for something they cannot see? Many people have a great intensity of life and that can get in the way too. Have focus but don’t bite your nails. I often laugh at myself; I have been serious about what I wanted but I have never taken myself too seriously.

“Perhaps the greatest challenge is to have some dignity, some style, no matter what your situation. You may have no money but it costs nothing to keep your head up. I have struggled and I identify with other people who have struggled. Some make it, some don’t but the strong person is the one who doesn’t give up, who doesn’t lose their sense of worth and who keeps on trying.” 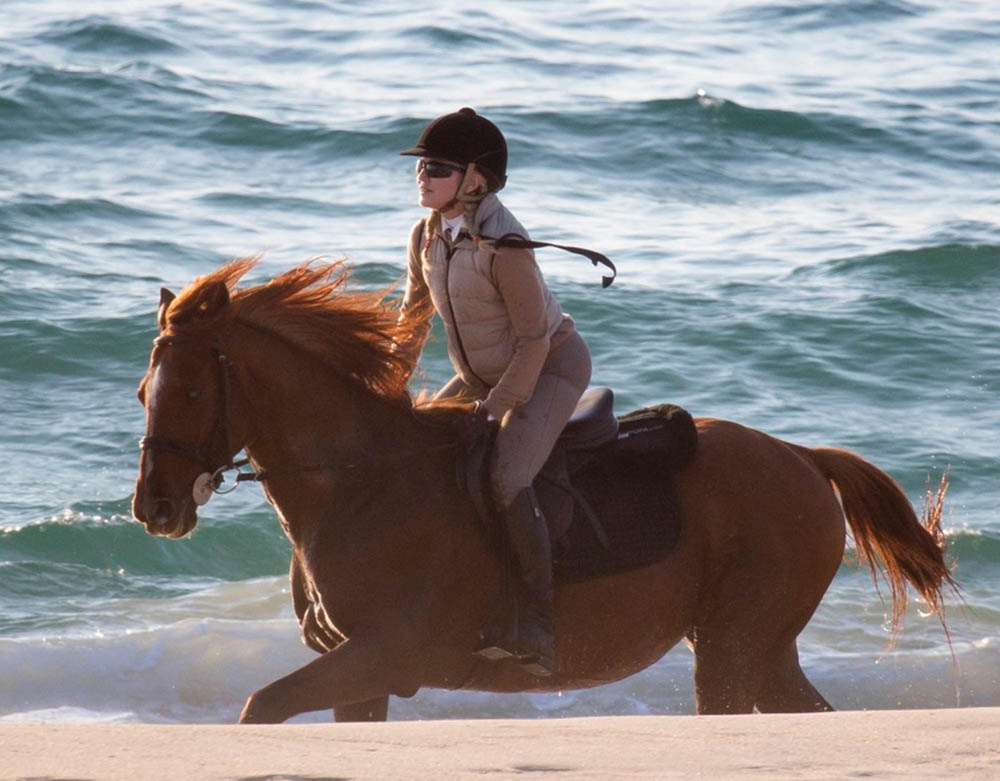 'My recording company don’t really like me riding too much because of the risk, but hey, it’s fun!' © EMG Ltd. 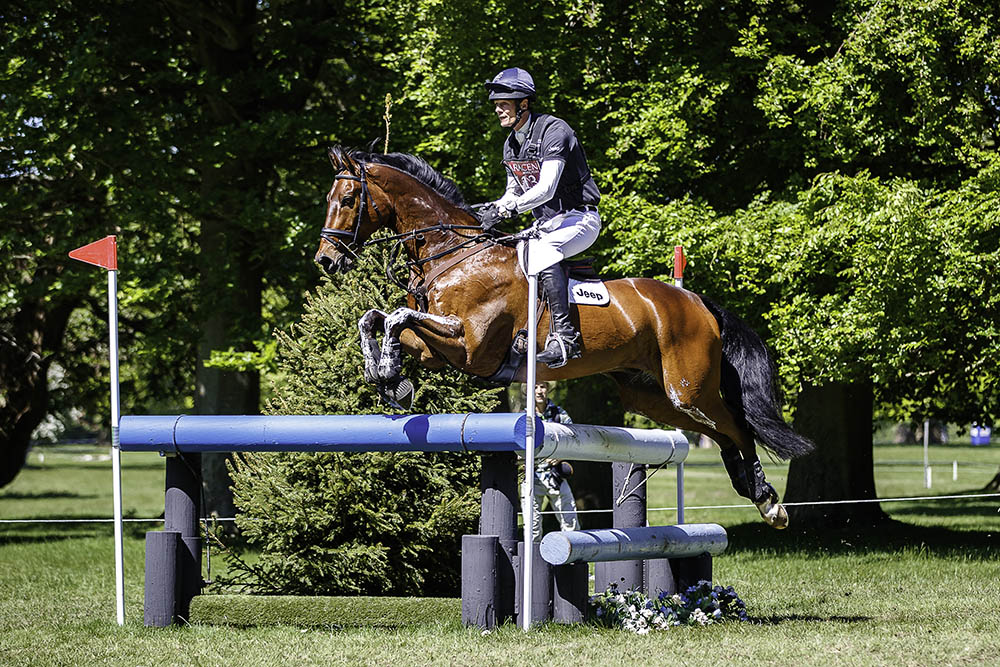 It sounds like Madonna should be a riding coach. “No way, I’m much better than I was but I can still get better. Everyone knows that I had a bad fall – not that there is such a thing as a good fall, of course. That was on my birthday when one of my gifts was a horse. I broke eight bones, spent some time in hospital and was strapped for some time until everything healed. I wanted to get back on as quickly as I could but it took a while. That was not my only fall and now I am so experienced in falling that I could be a stunt woman. I haven’t had any real injuries since that first time.

“I made sure that my kids started riding at a much earlier age than me. I think you bounce better when you are younger. I didn’t force them to ride but if they wanted to I made it possible for them to have proper lessons from a very good instructor. I did the same myself, but for them it was earlier and they love it as much as I do.

“The first horses I owned were in England and having bought some it seemed like a good idea to actually be able to have some fun with them – and I do mean with them, because I always believe that your relationship with your horses, dogs or any other animal should be a two-way pleasure. I have always made sure that my horses have the best I can give them and that included me as a rider.

“Wiliam Fox-Pitt, the brilliant eventer, did not live far away and he gave me lessons in the early days of my riding. He was very patient with me – mostly – we had our moments. He didn’t just teach me how to ride properly but how to enjoy it and ride with the horse rather than just on the horse. 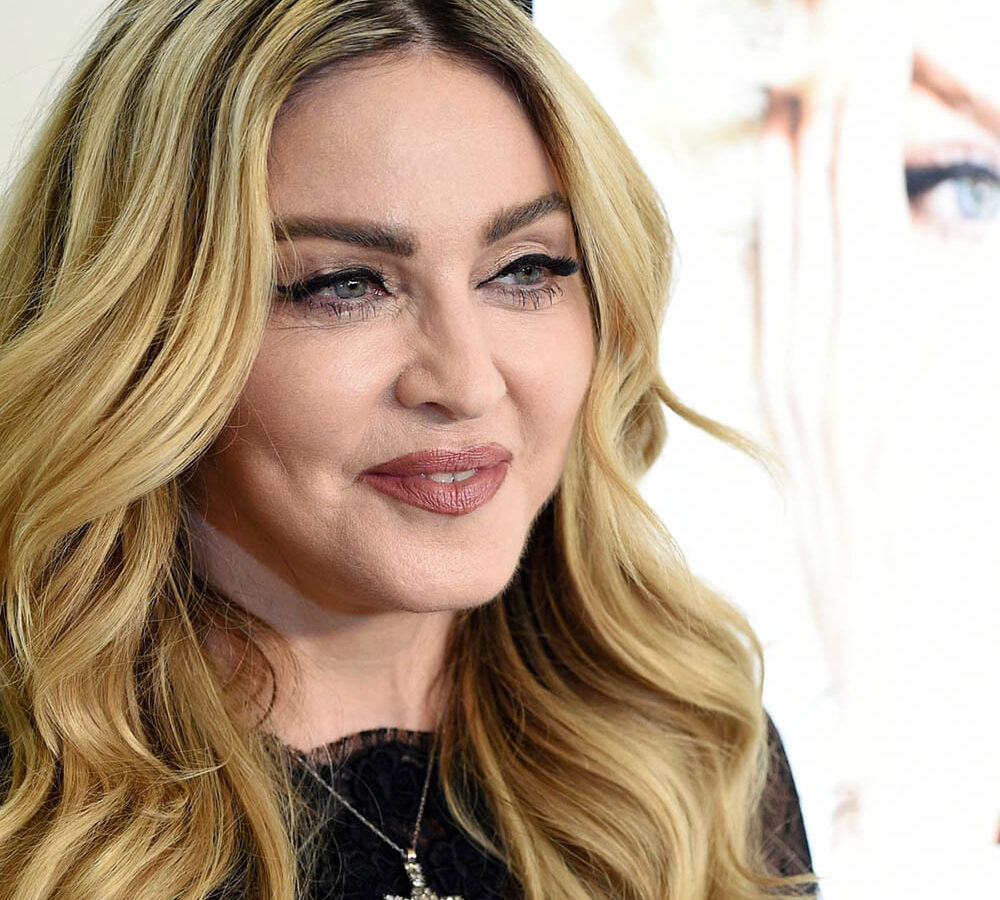 Madonna is adamant that age is no barrier when it comes to things like horse riding. © EMG Ltd.

“One of the things I learned was how to avoid getting hurt when you fall off. I haven’t quite mastered that totally but I am better than when I first started, that’s for sure. I also learned about the abilities of different types of horse. We bought some Welsh cobs and one in particular became a firm favourite of mine. He was a grey gelding with the beautiful Welsh name of Ystrad Dewi. I loved the name as well as the horse. Of course, in the yard he was known as Tom and he was a real character. Boris is another favourite and I have ridden him a lot. He is a gentleman but has a wicked sense of humour and a great turn of speed and jumping ability.

“When we moved back to the States most of the horses came with me to live on a ranch I had bought. In Florida, another British eventer – Daisy Trayford – took over giving me tuition, and even after we moved back she flew over to keep up the lessons. I have made sure that my children have had the opportunity to learn as well and David in particular has taken to riding really well.

“As for me, I just love it. I even dream about horses – occasionally I have a nightmare about that first big fall, but usually I dream about riding fast on a horse that is enjoying it as much as me. I like hacking but I also enjoy jumping and a gallop when there is a chance. My recording company don’t really like me riding too much because of the risk, but hey, it’s fun.”

So, what does the future hold? “Definitely more riding – and more recordings and performances too,” she says. “That is what I do. That is my job and that is my challenge – to come up with something new. At home I am an ordinary mum who is there for her kids, I do not have a wild social life; I prefer a good book actually or being with horses. But I am a performer with so many great fans. I owe it to them to keep coming up with something they will like and perhaps I owe that to myself too. We don’t do age barriers.” EQ