Heath and Krissy Harris have been in the entertainment business for 50 years. They have trained movie horses all over the world, coached teams of trick riders, devised live shows, commercials and TV programs, many of which have been complex and challenging – but their latest production is the most massive undertaking of their career – it’s called Stonewall Equestrian. 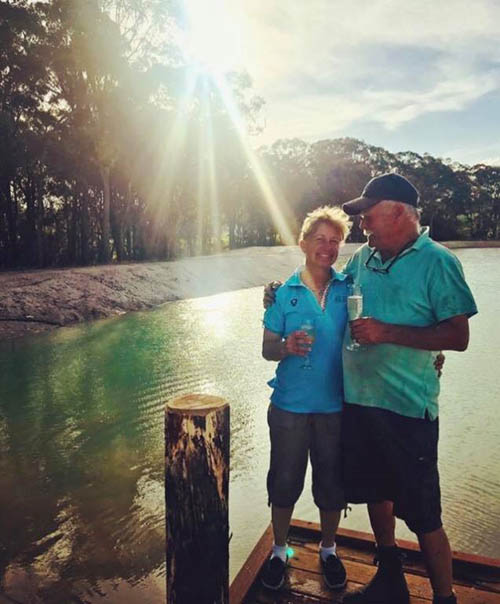 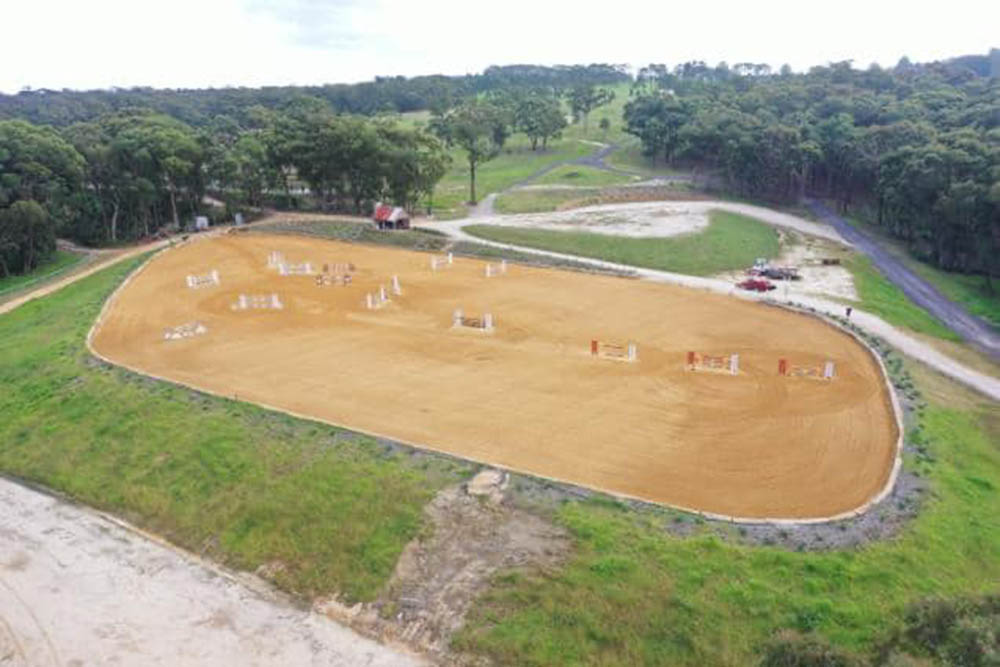 One of Stonewall's arenas from the air.

Several years ago Krissy Harris declared that she would like to own a showground. As a young showjumper she had spent a lot of time competing in ag shows around Australia.

“These events were often held in beautiful historic surroundings,” she recalls. “I was fascinated by how the grounds would come alive during the early morning. Riders arriving in floats and trucks, traders putting up stalls, Ferris wheels and sideshows being assembled. I just loved the atmosphere.

“It was a similar experience when I worked in the film business with Heath. We were always on set very early with the horses when the crew would be preparing for the day’s first scene. When the time came for the director to call ‘action’, much of our work had been done.

“I’ve always enjoyed the planning and setting-up process, and when Heath retired from the film industry, I told him how I wanted to create a beautiful park-like equestrian facility – one that was horse and rider-friendly which competitors and spectators could enjoy.”

After months of searching, they found some land at Mangrove Mountain on the NSW Central Coast, not far from their present home in Mt White. It was ideally situated on Wisemans Ferry Road, close to shops, a petrol station, cafes, doctor’s surgery, a couple of golf clubs, several B&Bs and a motorway. Spread over 110 acres, this former citrus farm was little more than a neglected rubbish tip – but to the Harrises it had enormous potential. They bought it – and the creation of Stonewall Equestrian began.

In February 2016 a stream of semi-trailers removed countless loads of junk – fridges, stoves, car bodies and tyres abandoned beneath jungles of lantana. Once it was all cleared away Heath and Krissy were left with a blank canvas upon which they could begin to realise their vision.

In five years the transformation of this shabby, run-down acreage has been spectacular. While it is still a work-in-progress it is already being hailed by experts as a world-class equestrian facility. Two thousand trees have been planted and nine kilometres of roads laid, with rows of drystone walls, reminiscent of the Irish countryside, running from the entrance gates. It is, of course, these, which give the property its name.

“The walls are organic and unpretentious, and the sandstone comes from various local quarries,” explains Heath, who has a hands-on approach to everything being built on the property. He drives bobcats, backhoes, bulldozers and operates an on-site sawmill for preparing timber for wooden and corrugated iron sheds and shelters. These are scattered across the property and are similar to the Snowy River-type huts prominent in the iconic Australian film which Heath had worked on back in the eighties.

“He’s a wizard at conceiving atmosphere,” says Krissy. “It might have been my idea to build a showground but when it comes to creative input it’s Heath who’s supplied 90% of it. He works out what goes where and how; and I make technical suggestions such as the sizes of arenas and stables. Shortly, 250 portable ones will be built with connections to power and water.

“People love to be with their horses and our parking is specifically designed so that they can pull up in their floats, stable their horses close by and, at the same time, be near to the competition arenas.” 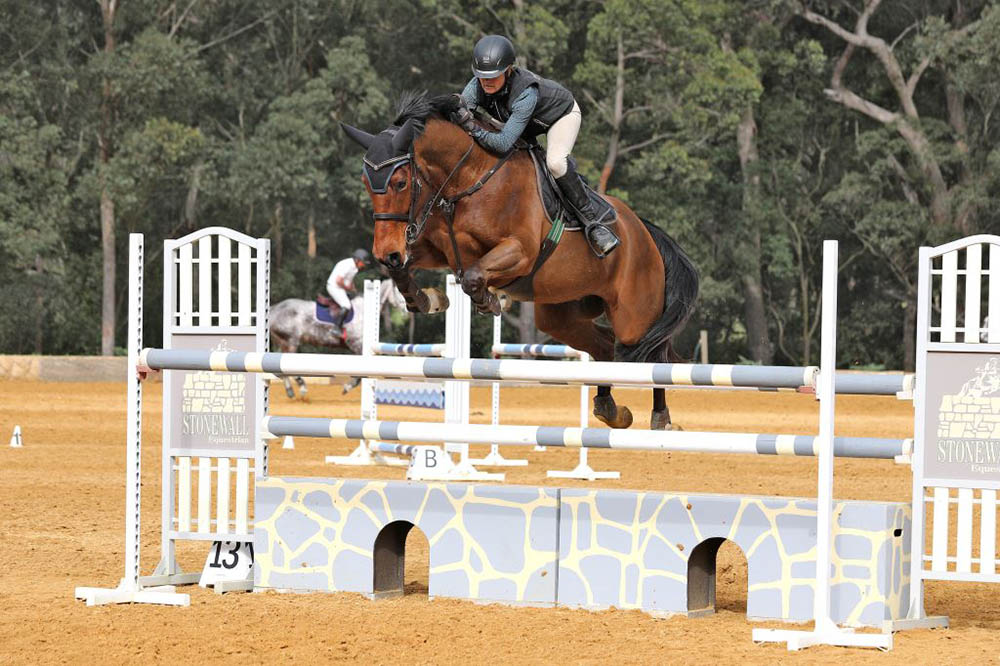 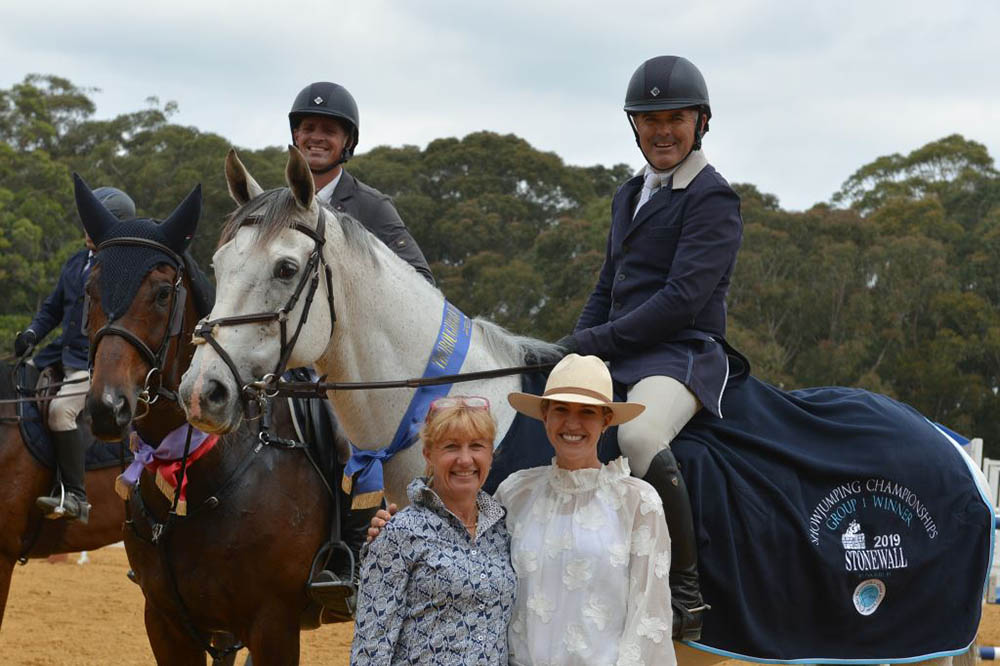 Krissy Harris and Jessica Bott with David Cooper in the saddle at a Stonewall Equestrian event. 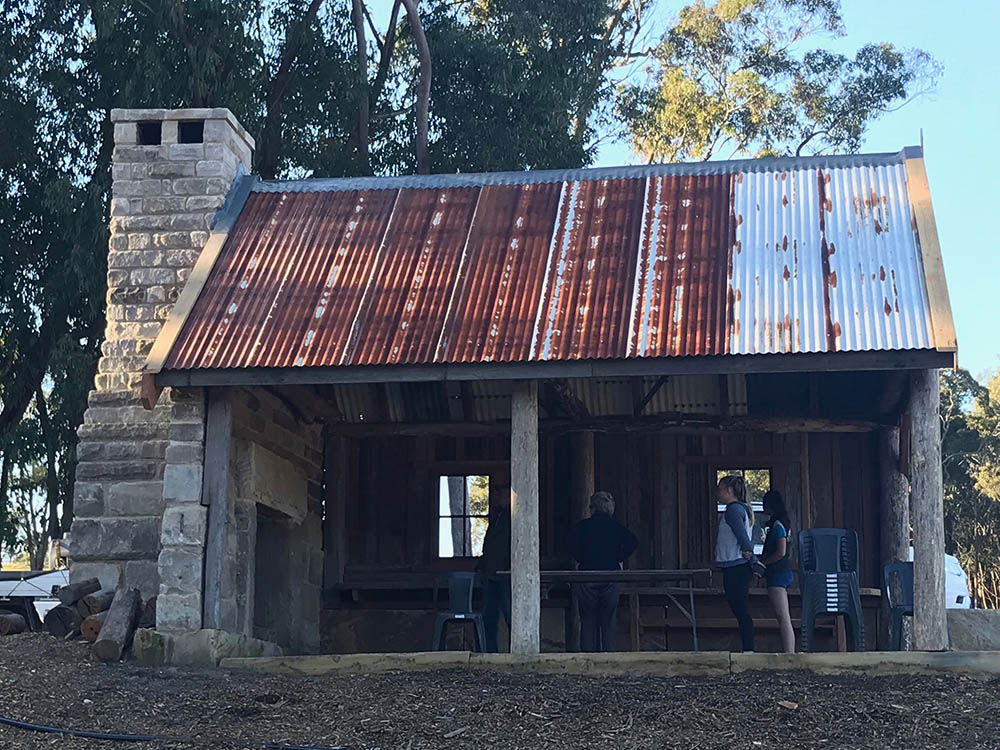 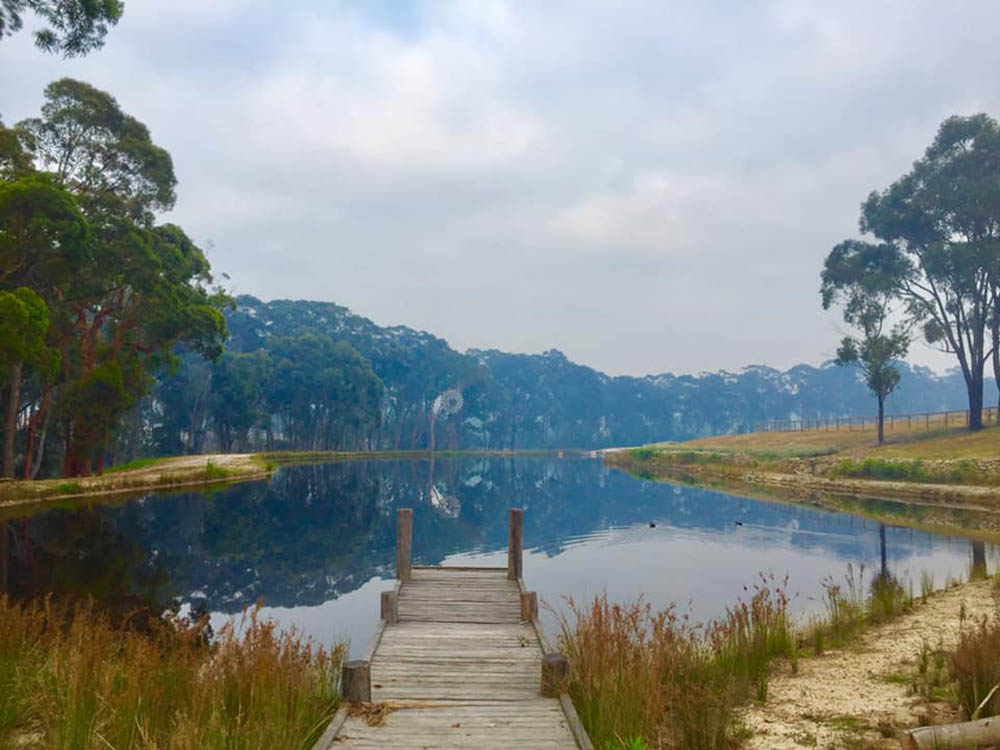 Walking the course at Stonewall.

Stonewall’s arenas are all magnificent. Two have a bespoke surface mix invented by Heath, and there is an enormous grass one. “It’s 1.5 acres and one of the largest competition grass equestrian arenas in the southern hemisphere,” Heath declares. “There’s also a separate 90m x 40m warm-up arena for horses and riders, with provision for trade stands, and food and VIP marquees.”

One of the most appealing aspects of this complex is that nothing is ugly or intrusive. It is as if the dam, the bridges, the Hay Plains windmill and the waterfall have always been part of the landscape. In fact, the waterfall was the result of the local council requiring the installation of a drain. Instead of unsightly pipes or trenches, they created a water feature that also provides a habitat for frogs.

Other areas are also devoted to the protection of nature. From the equestrian site’s 50 acres is a 10-acre wildlife corridor leading to the remaining acreage on which the Harrises will build their home. They are hoping to begin work next year.

Meanwhile, shows are regularly being held and areas used as schooling venues. Because of the quality of the surfaces, the High-Performance eventers undergo jumping and dressage training there. One of the coaches, former Olympic showjumper Rod Brown, comments: “This beautiful equestrian park will be like no other in this country. It’ll be Australia’s version of Aachen and Spruce Meadows”. 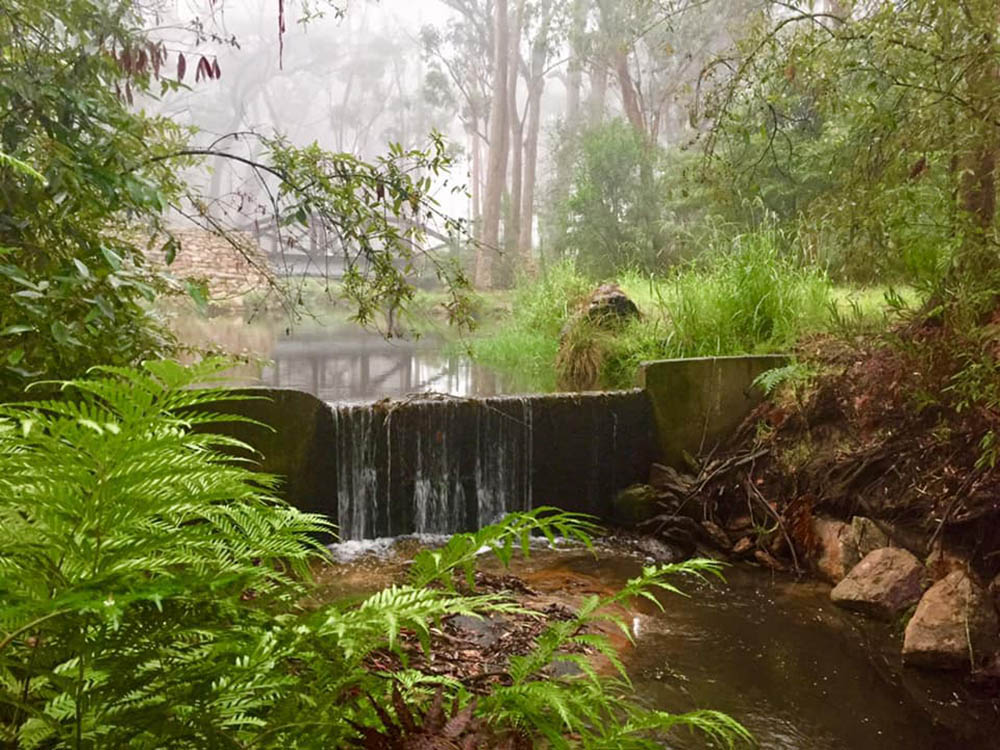 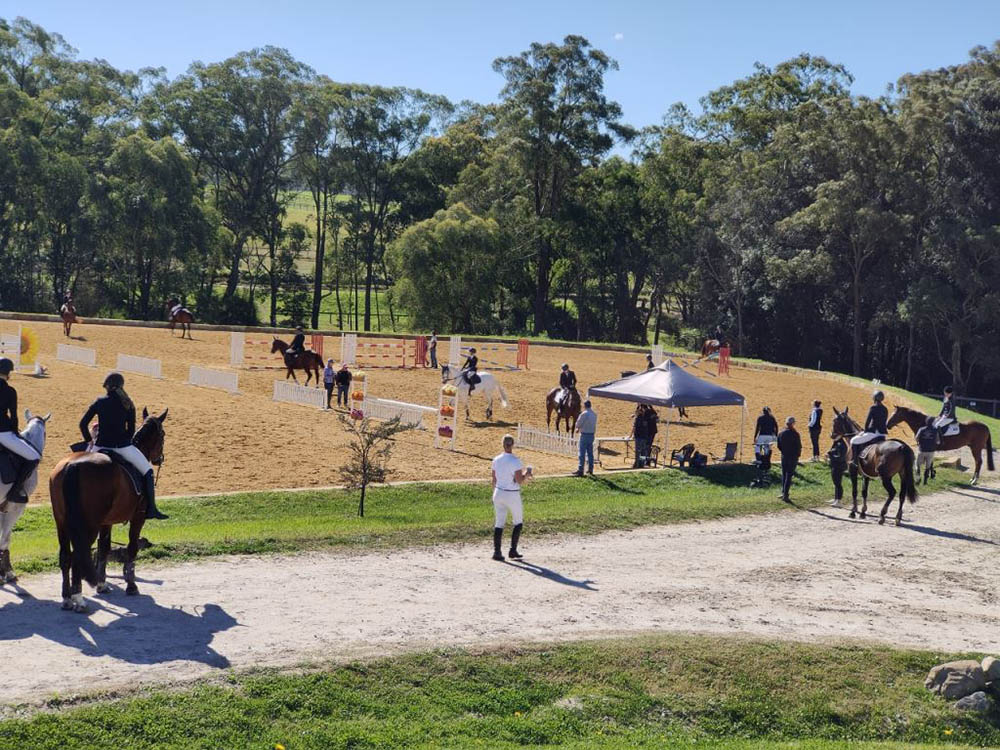 The warm up arena in action at a competition. © John Maunder. 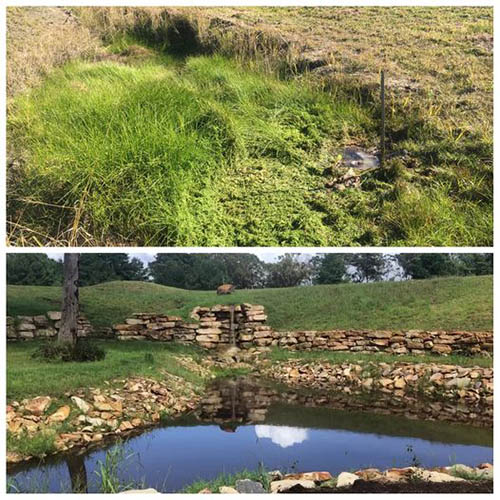 Why have an ugly drain when you can have a waterfall! 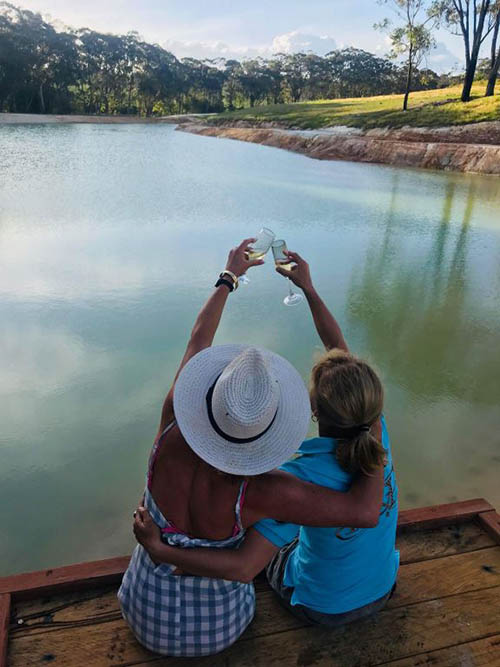 Krissy and a friend enjoy time by the lake.

Dressage weekends are also popular and so successful that one of the local clubs, the Central Coast Dressage Association, recently made the grounds its permanent location, resulting in a significant membership increase.

She is also organising this year’s Stonewall Showjumping Championships to be held on 24-27 November. International Chris Chugg is sure to be competing and this five-time Australian Champion cannot speak highly enough about the facility. “It’s about time we had well-maintained surface-built arenas. The footing is outstanding. As I mentioned to Heath when I was riding there one morning, ‘you couldn’t make the going any better’.

“It’s a practical horse place run by practical people who have made use of the property’s natural resources and worked out what is sustainable and workable. The atmosphere is excellent – and there are no Gestapo at the gate!”

Dressage rider Gina Montgomery, who recently conducted a clinic there, sums up what the overall impression is regarding Stonewall. “Its organic shapes fit so well into the environment,” she says. “At the beginning Heath had the brilliant ability to look at this overrun orchard and foresee how it could be transformed into something unique. The Harrises have bought their expansive knowledge gleaned from their careers and world travels and effectively developed a highly functional space.

“They’ve thought of everything from every angle – the arenas ride well, the organisation committees can set up practically, spectators can view all the events, and sponsors will feel confident their brands are well presented in a premier environment. We’re super excited about Stonewall and so thankful to have such a brilliant facility putting equestrian sport into such a great spotlight.” EQ

You can find out more about the Thoroughbred Sport Horse Association here.

The beautiful Stonewall Equestrian from the air, May 2021.