Wasn’t it wonderful to be able to watch all the equestrian events at the Olympics. And then the announcement that the 2032 Olympics will be in Brisbane. What a combination to excite the dreams and imagination of young Aussie equestrians. Only 11 years to go… 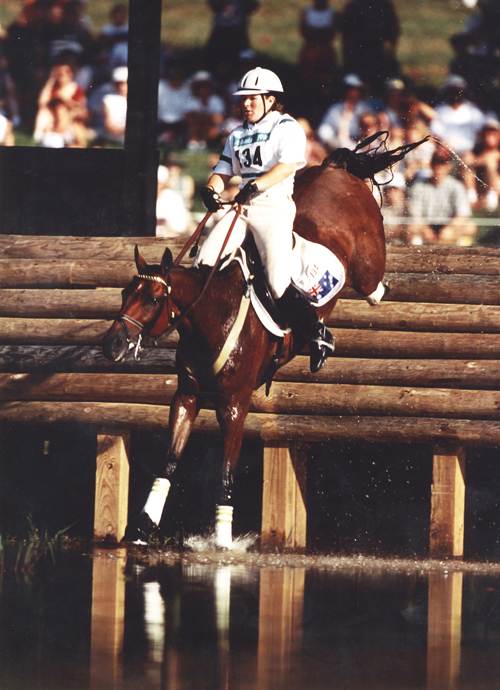 Wendy Schaeffer rode her 'pony club' horse Sunburst to gold at the 1996 Atlanta Olympic Games. Photo supplied by the Schaeffer family.
Click here to find out more about your horse's digestive health 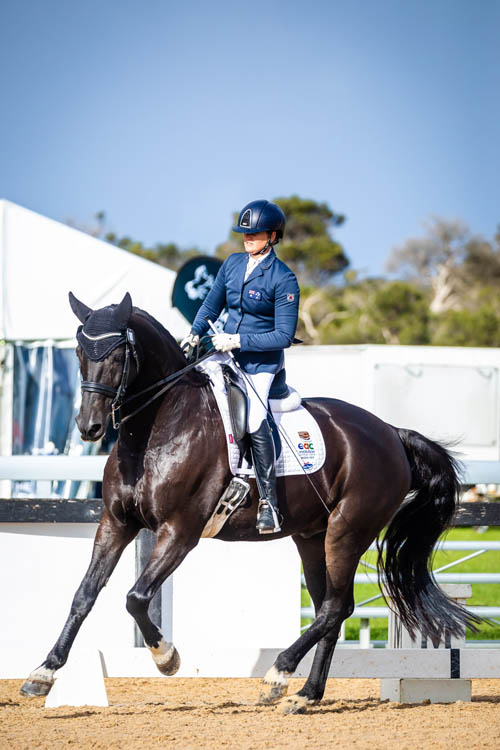 Sharon Jarvis, pictured here riding Romanos whom she took to her third Paralympics in Tokyo, says that even as child she was always completely hooked on the Games. © One Eyed Frog Photography.

By 2032, many of the old guard of Olympic contenders, the experienced Olympians of this era, will have hung up their boots and helmets and a new generation of Olympians will represent us. So you want to go to the Games? It’s not all rainbows and unicorns, that’s for sure. It’s damn hard work, dedication, focus and sacrifice. “You must be willing to walk over broken glass,” says Mary Hanna, one of our most experienced Olympians.

Wendy Schaeffer-Macdonald lived the dream of taking her Pony Club horse Sunburst to the Olympics and winning a gold medal. In fact, if it weren’t for changes in the rules she would have won both team and individual gold medals. Sunburst had come second to last at the Birdsville Races before he was bought for 11-year-old Wendy by her mother, Di, herself an Australian representative eventing rider. Wendy says that to get to the Games, “You must really believe in yourself, even if you are a bit arrogant. You must have energy, and motivation and follow a plan”.

Mary Hanna, the oldest Australian Olympian with six Olympics under her belt, says that determination and focus are essential. When she got together with Rob Hanna, at that time an eventing rider and businessman, he helped her realise that if she was going to succeed she had to be much more focused on the goal. She had to make changes in her life so that she could be really focused on the goal of representing Australia.

Mary had to make hard decisions and sell horses that she loved, but who probably could not do the job she wanted them to do, and invest in one horse that could perform at the level necessary. That horse was Mosaic, her breakthrough Olympic horse. Mary changed her life so that she was “wearing less hats” to entirely focus on her goal. “You have to be prepared to give things up,” she says. “You need to make a plan, with all the steps to get to where you need to be. You have to remove anything in your life that isn’t directly related to your goals. You have to make sacrifices.”

Heath Ryan is an Olympian (Beijing 2008, dressage) and was selected to ride at the World Eventing Championships (Gawler). He has helped many young equestrians pursue their dreams and has the perspective of years in the sport. He points out that unlike many other sports there is no pathway to the top supported by our sports administration. “Don’t rely on High Performance pathways,” he advises. “No-one has ever been produced by the squads. Everyone who makes it, makes it themselves. Most Olympians are produced by their parents.”

Heath points out that the 10 to 18-year-old kids of today could be riding at the Brisbane Olympics, but they need a 10-year plan and dedication to the plan. To make it to the Games you have to be dedicated and make no excuses. Heath suggests just to start to see if you might be able to have a crack, try to make your riding the most important thing for three months. Ride five to six days a week every week… rain, hail, or shine. If there are family or school commitments, ride early or ride late, but get it done. “It’s jolly hard work, every day.”

If you want to achieve these big goals you must take responsibility for yourself. “If it is going to be, it is up to me” is a good slogan to live by. The notice on your mirror that says “you are looking at the person responsible for your progress” is another good one. The buck stops with you. Psychologists call this an “internal locus of control”, believing that you are responsible for your own success. Conversely, people with an external locus of control will tend to think that outside forces determine outcomes, like luck. Nowhere is this more important than in the equestrian sports because, as Heath says, there is no pathway laid out, no funnel.

Sharon Jarvis has just contested her third Paralympics. She is a dual WEG medallist but finished “in the worst place at the Paralympics in Beijing, fourth”. Sharon says that even as child she was always completely hooked on the Games, not getting her homework done when the Games were on as she was up watching everything. When she found out that she was eligible for the Paralympics due to disability after childhood bone cancer, that became her dream. When she made it to her first Games she said she felt that “I had found my place. I was a self-conscious kid but at the Paralympics everyone has differences and everyone is included.”

Sharon says, “You have to be over-the-top committed, more than 100%, or you are just not going to get there. You have to give it your whole heart and soul. You have to get to the end of your tether and then keep going. This is not for the faint-hearted. You have to have a craziness in you to keep going. It is easy to not do it. It is hard to keep going. You must be prepared to make sacrifices, to give things up to stay on the path.”

Mary Hanna, pictured here at her sixth Olympics in Tokyo with Calanta, says that determination and focus are essential if you want to be an Olympian. © Hippo Foto - Dirk Caremans. 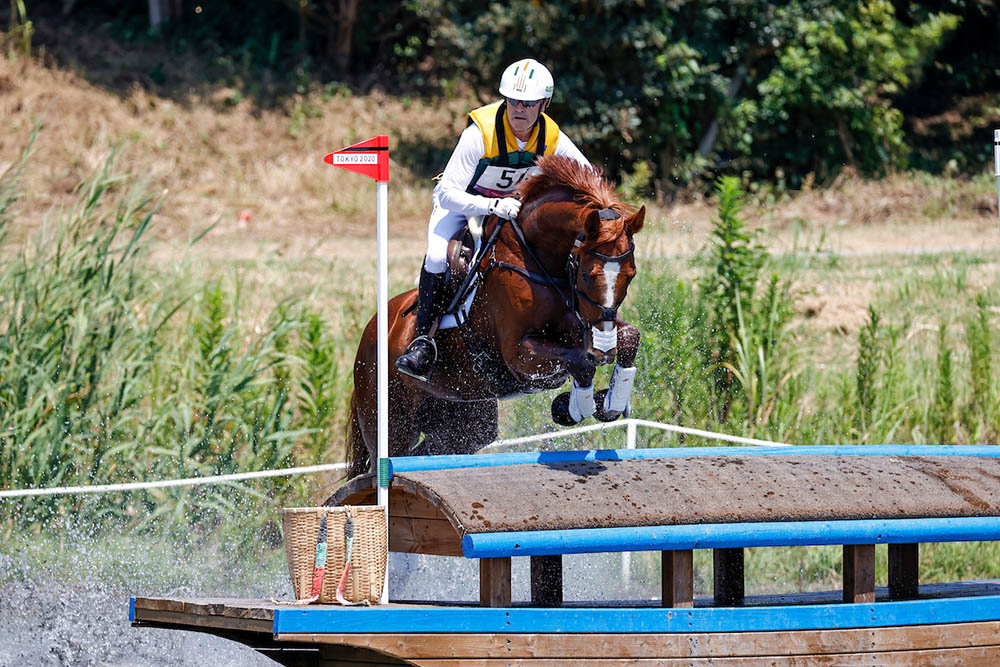 Andrew Hoy a) during his days at Holbrook Pony Club, and b) competing at his record eighth Games in Tokyo with Vassily de Lassos. © Hippo Foto - Dirk Caremans.

It is true that no one makes it to the top on their own and all elite athletes need a team around them. Parents are likely to be the best sponsors and owners you will ever have, so be nice to them and make sure that you appreciate what they do for you. Certainly, many riders do not own their horses, so owners are a really important part of any team. They will have their own reasons to be involved and must be taken into account in any planning. Mary Hanna points out that you need to get a good trainer. Wendy emphasises that you need a sound business model either in Australia or overseas, and financial stability is important to ensure that you can maintain your focus on the goal over the long period of time necessary.

Heath and Mary, Wendy and Sharon, all emphasise that detailed planning is essential. You need to know what you need to do to get selected. You need a timeline. It will be a 4 to 6-year program. You need to keep improving in small increments. At least two years before the Games you need to be in international competition. Nearly all of our Olympians in recent decades have gone overseas for experience. Wendy had a few years based in the UK, like most of our eventers including Heath. Many of them have stayed there (Andrew Hoy, Chris Burton) and some like Phillip Dutton and Boyd Martin now ride under a different flag (USA). Showjumpers Edwina Tops-Alexander and Julia Hargreaves have stayed in Europe, James Paterson-Robinson was there for years but is now in Australia, while Scott Keach, Matt Williams and Rowan Willis are based in the USA where there is also very strong competition with the good prizemoney needed for a viable business. Tokyo showjumping representative Katie Laurie is based in Canada.

Mary says, “You need to get out of your own pond, get amongst it and push yourself to mix it with the best.” She has had several long stays in Europe competing. Kristy Oatley moved to Germany when she was 12, to train. Lyndal Oatley has been based in Germany for more than 10 years. All these riders have made their own pathways to the top, and shown that there are many pathways. Just make your own. 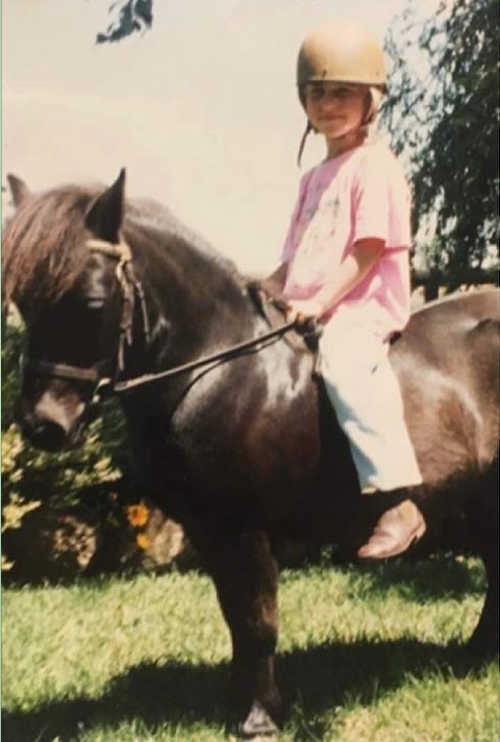 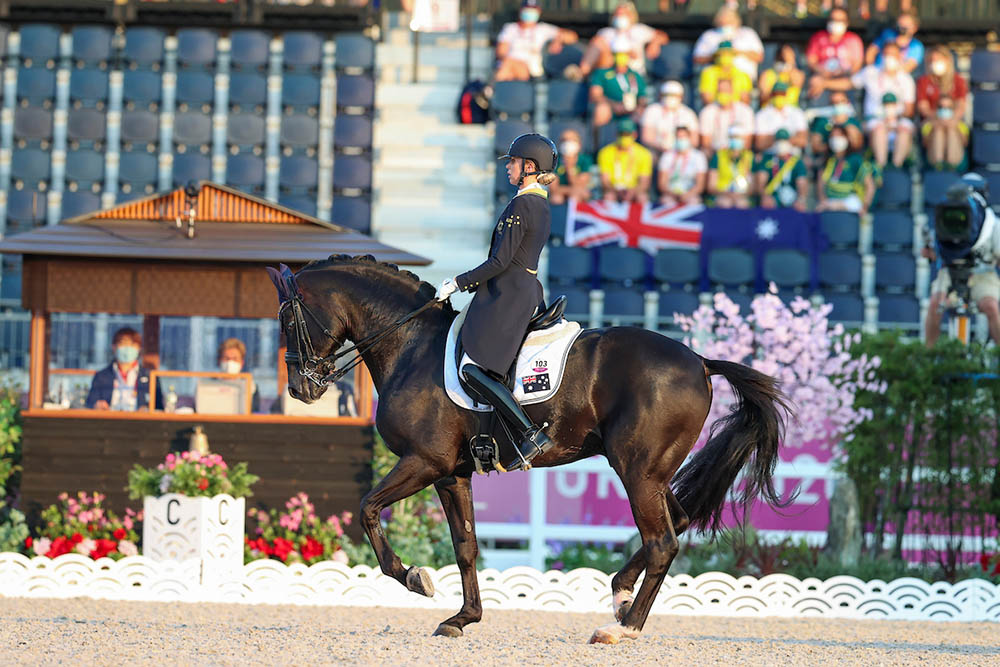 Simone Pearce a) riding in the eary days as a horse-mad kid, and b) competing at her first Oympics in Tokyo with Destano. © Hippo Foto - Dirk Caremans.

Sharon and Mary emphasise that you must also really know your horse. You must know what he likes, how he responds to heat or new conditions, what he needs to be content. You must know his legs and his feet. Heath also points out that it’s not just riding but managing your horse so that he is sound and peaking at the right time. So many times we have seen that the team is not necessarily the best horses, but the last three or four horses standing at the time of selection. That was true once again at Tokyo where Kevin McNab won a silver medal, having originally been named as second reserve. Peder Fredricson, Tokyo team gold and individual silver medallist in showjumping, also talked about the importance of being hands-on in managing your horse in a recent interview. His horse All In was barefoot at Tokyo, a wonderful example of Peder making the best decision for his individual horse.

So you still want to go to the Games? If this is your goal be SMART about it. SMART goals are Specific, Measurable, Achievable, Relevant, Timely (you can read more about Kerry’s tips for goal setting here). You need to set some goals; a ladder of goals actually, a series of smaller goals that get you on that elite trajectory. This ladder of goals needs to get you into international competition at least a couple of years ahead of any Olympic Games. You will need to be focused, dedicated and prepared to make sacrifices. You will need to not only be an elite rider but you will need to be expert in managing your horse, building a positive team around you and have a sound financial plan. 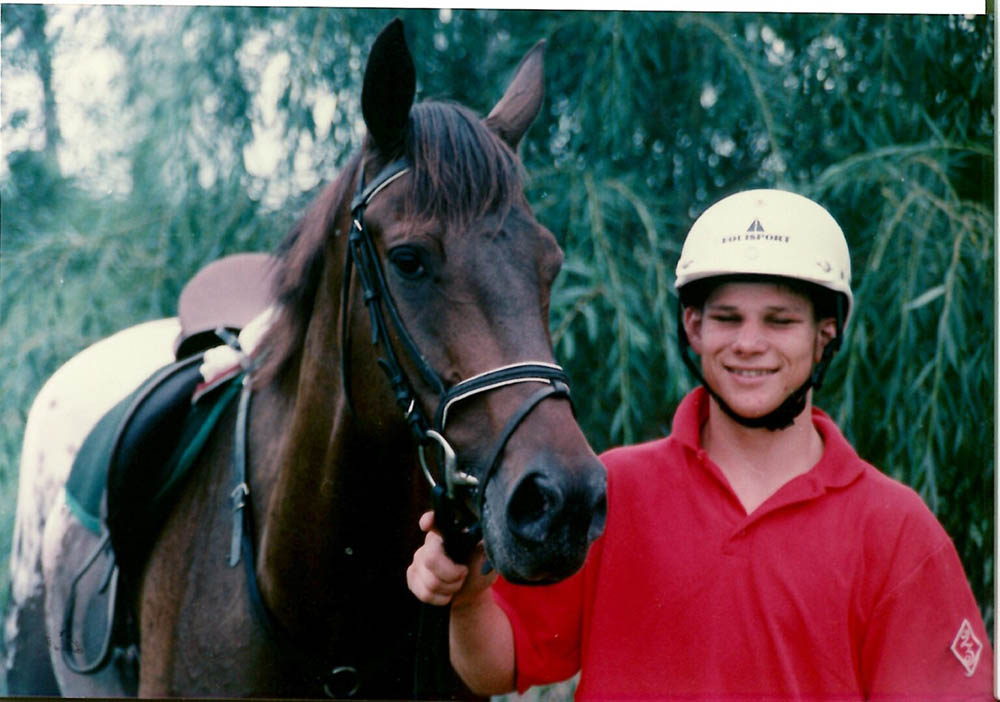 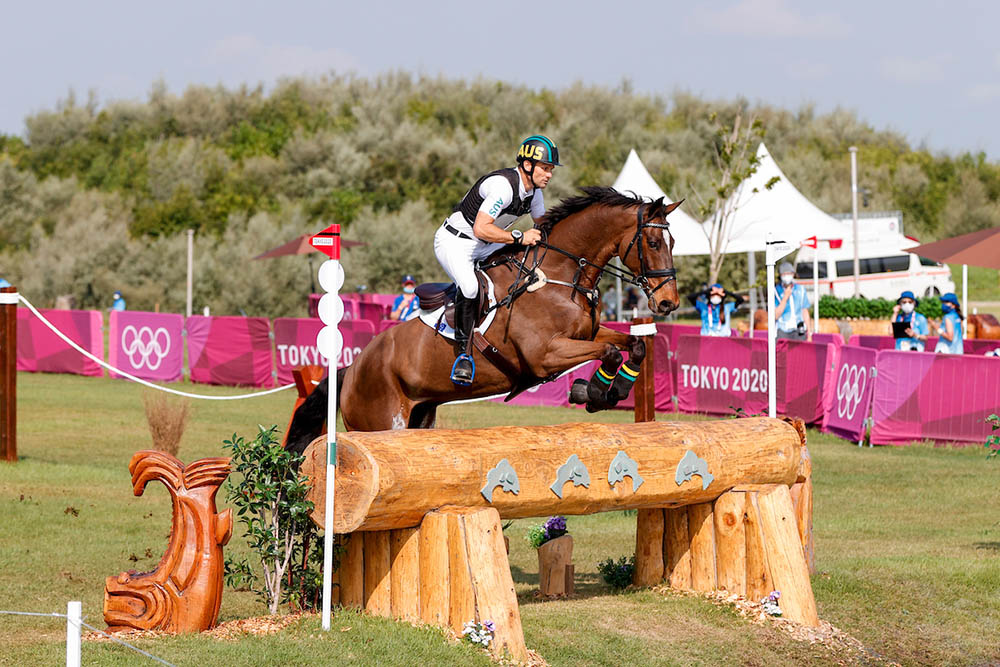 Shane Rose a) at Avondale Pony Club's Summer Camp, and b) with Virgil competing at his third Olympic Games in Tokyo. © Hippo Foto - Dirk Caremans.

You or your team will have to blaze your own path. Those among us who choose this path seem to get hooked on it.

If you are not prepared to be so single-minded and make these sacrifices, maybe the Games should not be your goal. There are plenty of rewards and enjoyment in other goals, competing at a level that you can balance with other commitments. For example, my goal is to qualify for the Games. The score you need to qualify shows you have reached an international level, but is well below the score you need to be considered for selection on the Australian team. Of course, I aspire to get a selection score, but I am not wanting to sacrifice the richness I have in my life to be as focused as it takes to get on a team. You have to set your own goals, and then enjoy the journey. Have fun. EQ