It’s not always the flashiest or most talented horse in the field that shines the brightest; sometimes it’s the one with the will to try harder and go the extra mile. These horses may not always catch the eye in the ring, but they are often the ones destined to leave a hoof print on our lives. 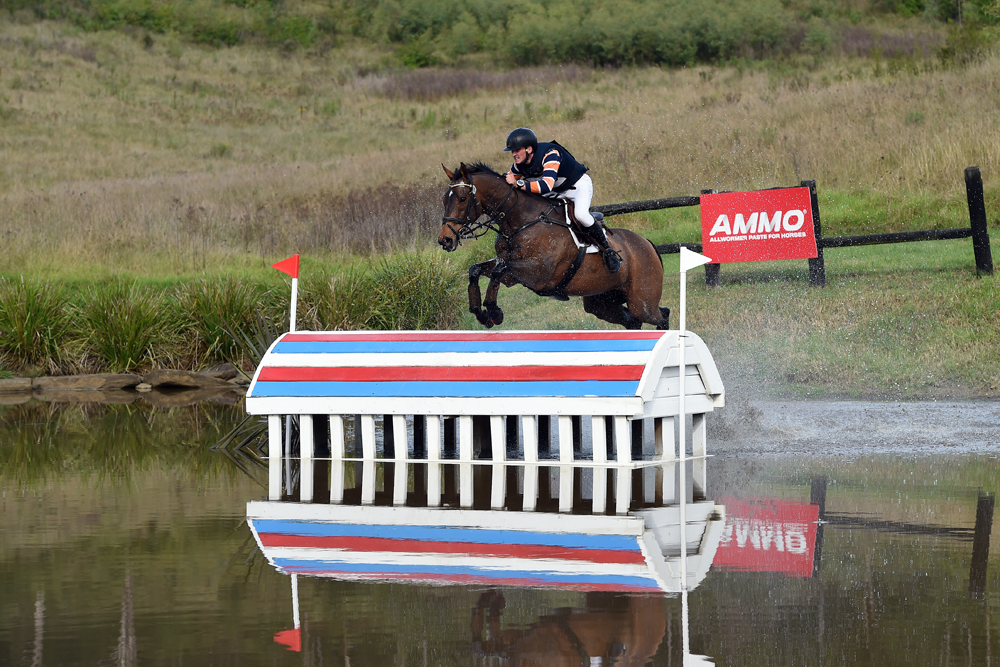 Sam Woods and Cage Fighter on cross country in the CCI4*L at Sydney International Three-Day Event earlier this year. © Oz Shotz
Click here to listen to the latest podcast.

Foaled in 2005, Cagey started life as a well-bred racehorse and was reasonably successful on the track, having 15 starts for three wins, five places and nearly $50,000 in prizemoney. Trained by Matthew Smith, he underwent pre-training at Bimbadeen Thoroughbreds with Niki and Shane Rose — and so when the curtain closed on his racing career, the logical next step was to see whether Niki and Shane were interested in him as an eventing prospect.

“Cagey became our working pupil horse,” explains Niki. “He wasn’t starring; we didn’t think ‘Oh, wow, this is an amazing horse’. He was just a really nice horse with a really good attitude. And so he got ridden by lots of different working pupils.”

Cagey was first evented by a girl from Western Australia, Jessamy Walsh — who has gone on to be quite a successful event rider — and she came up with the horse’s competition name, ‘Cage Fighter’. Jessamy rode the gelding to the old one-star (current two-star) level in 2013, before British working pupil Rhianna Craddock took over the reins the next year — also riding him at the old one-star level. When Rhianna decided not to event any more towards the end of 2016, Cagey partnered with a number of other working pupils before his current rider entered the picture.

“Sam Woods was a young working pupil with us and didn’t really have a horse with potential to go on,” explains Niki. “So we gave the ride on Cagey to Sam and they formed a really good partnership.” That was mid-2018, and since then Sam has taken the horse to four-star level. In May this year, both horse and rider had their first four-star long start and also a breakthrough FEI win when they took out the CCI4*L at Sydney International Three-Day Event — Sam at age 23 and Cagey at age 16.

“Sam has worked really hard with him,” says Niki. “Cagey is not naturally the most talented horse in all phases, but he’s a bit of a workman and if he can put it all together… at Sydney he just didn’t make any mistakes. He did a decent test, was great cross country — he’s naturally fast because he’s a thoroughbred — and then he’s pretty careful in the jumping. And Sam gave him a really good ride.” 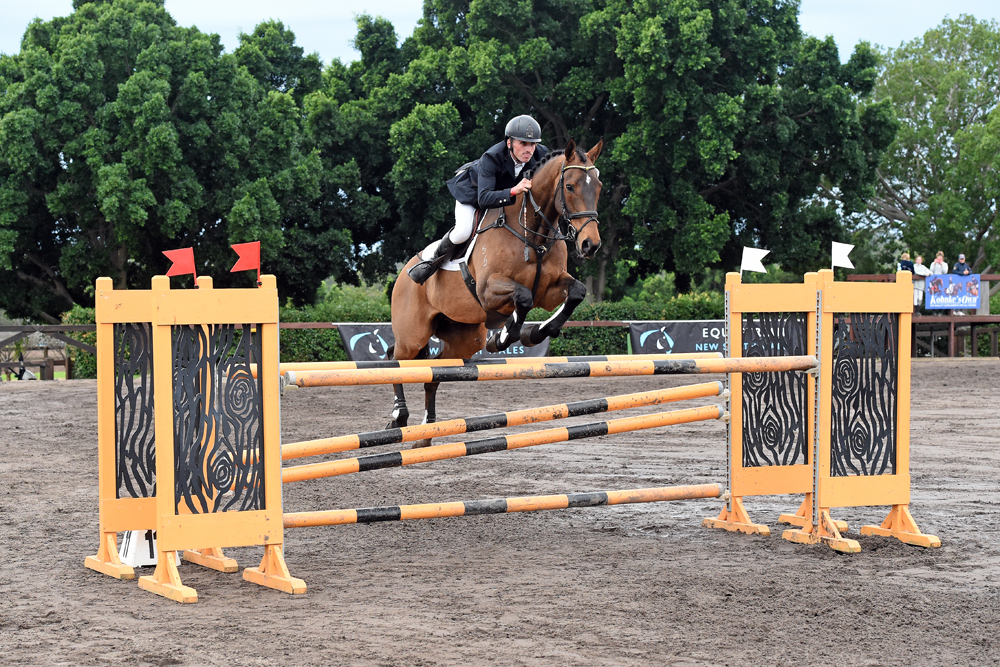 Together Sam and Cagey have gone from two-star to four-star level. © Oz Shotz

Growing up on the South Coast of New South Wales, Sam explains that his nanna and mother ran a riding school and horses were always a part of his life. “I was fortunate enough to be on a horse from day dot. It just grew from there, pony after pony, and jump after jump,” he explains, adding that his mother remains one of his most influential coaches.

As a kid, Sam followed the show circuit show jumping, before an interest in eventing was sparked halfway through school — partially because he competed in the discipline on the school team. Hooked by the thrill of cross country, his love for the sport grew following Pony Club camps with elite event rider Sam Lyle. In the years that followed, he had lessons with Sam, as well as renowned eventing coach Simon Kale. From there, it was “onwards and upwards”. 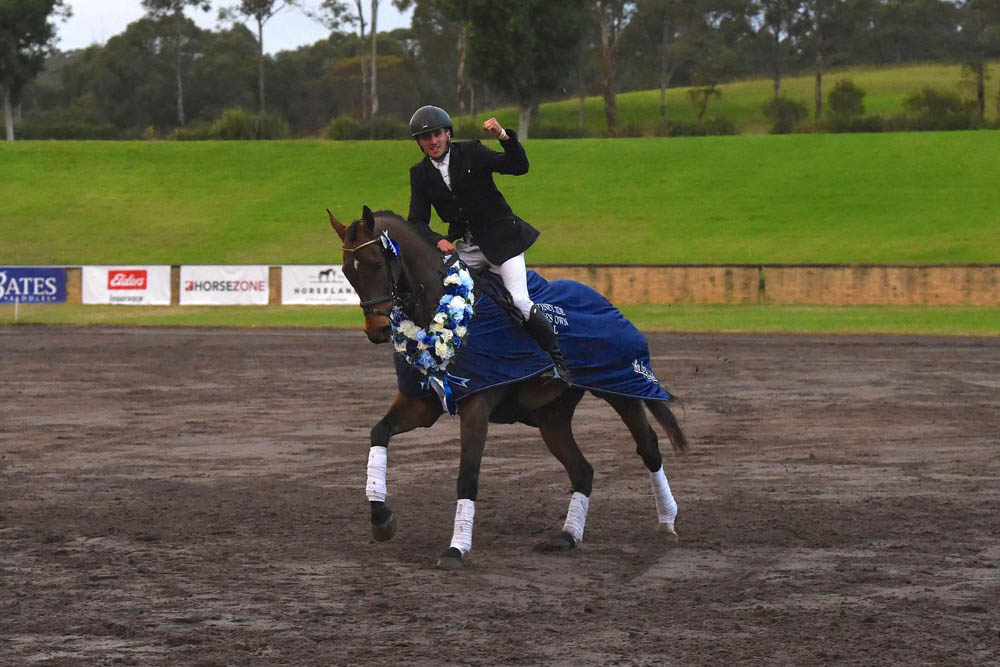 Sam and Cage Fighter on their victory lap after winning the CCI4*L at Sydney. © Oz Shotz Photography/Sydney 3DE

“He’s just a real trouper of a horse.”

Sam’s connection with Shane and Niki Rose began during Year 11 and 12, when every school holidays were spent at Bimbadeen Park. “As soon as I finished school, there was a job opportunity. I took it with both hands, and I’ve now been there going on six years,” he says.

Speaking about Cage Fighter, Sam explains that the horse has taken him up the grades — even though he’d never done it before himself. Sam completed his first two-star with the horse, followed by a three-star and then eventually a few four-star short events. Sydney this year was both Sam and Cagey’s very first four-star long.

“It was a great cross-country round,” says Sam, reflecting on their win. “Dressage isn’t really our thing, but we got it done. He’s just a real trouper of a horse, he just keeps trying and trying.”

Sam says it’s Cagey’s will to try that makes him special. “It’s his attitude, that thoroughbred attitude, and his will to just find a way to be able to do it, and get it done well. He’s got a few old tricks [from his racing days] that he still portrays, but it’s all worth it.”

Niki echoes Sam’s sentiment regarding Cagey’s greatest attributes being his attitude and willingness to try. “He’s not the best athlete, but he just really tries hard. And sometimes you end up on top, over the talented horses that sort of have a bit of attitude and don’t really help you along the way. But Cagey has always been a really genuine, nice, willing horse.”

Sam explains that he’s no stranger to thoroughbreds — in fact, it was an off the track horse that helped instil his love of eventing. “I had an awesome grey horse that I did all my Pony Club levels on. That was the horse that sort of sparked my eventing career really.”

In addition to Cagey, Sam has two other horses in work at present. The first is Hashtag Trouble — another one of Shane and Niki’s. “He was in the CCI3*L at Sydney and was doing well until we knocked a lot of rails down in the jumping… but he’s up and coming,” explains Sam. “And then I have another one, Lloyd. He’s older and was given to me because he bucked a lot. We’ve worked through that, and he’s actually turned out to be a good little jumper and quite willing.”

While Covid-19 restrictions have foiled Sam’s plans of heading to the Australian International Three-Day Event in Adelaide next month, he’s hopeful that by the end of the year there will be a few local events up and running. “To have a few four-star short competitions to end the year would be amazing. And then Adelaide next year!”

In the meantime, Sam and Cagey will continue working away and training towards their future goals. While to the casual onlooker Cage Fighter may appear to be an unremarkable bay thoroughbred, his will to try harder than most means his name will forever be etched in the history books as a Sydney International Three-Day Event winner. And for Sam, the horse that helped him debut at four-star level — and notch his first international win — will no doubt always hold a special place in his heart. EQ