Growing up in Germany, all Sabine Schut-Kery wanted to do was trick-riding. “I learnt how to ride side-saddle, drive four-in-hand, and also how to ride one horse and drive one in front! It was just a blast!” she says. At the time she was astute enough to learn dressage as well from the wise ones around her, never thinking where it might take her. Join us in discovering the delightful story of how Sabine and her stallion Sanceo became instrumental in Team USA’s silver medal at the Tokyo Olympics. It is just one of the many motivational stories in this month’s magazine. As if by serendipity, they all have a streak of aspiration and doggedness as well as luck and circumstance. 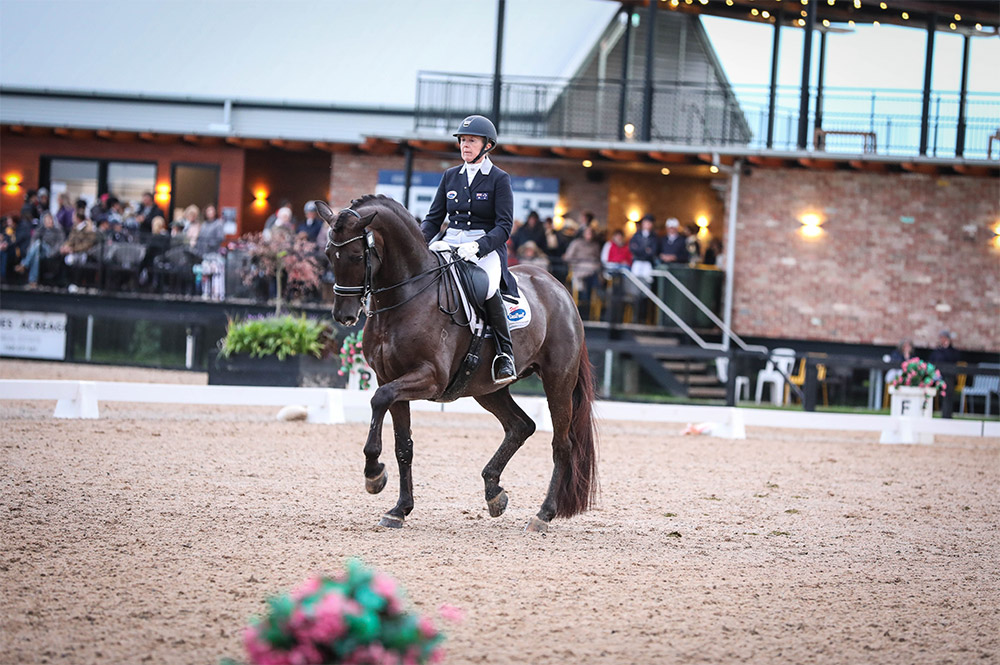 In the first major dressage competition since Sydney CD-Lite, Queenslander Liz Owens won the Inter II and Grand Prix tests at Brisbane CDN. She said modestly: “If I can do it, anyone can”, alluding to how long it took, as an amateur, to extract the best from Revelwood Starlite, the mare she bought as a four-year-old from Amanda Shoobridge. Theirs is a great success story for a locally bred and trained horse.

Alistair Schramm and his 18-year-old thoroughbred Zero Degrees (Sweeney) also shone at Brisbane. The younger brother of international eventer Dominic Schramm showed you can teach an old dog new tricks. Sweeney has prestigious racing lineage but was acquired by Alistair as an eventer – now they are killing it in Grand Prix dressage. Go figure.

Going against the odds is nothing new to Sue-Ellen Lovett. ‘The Blind Chick’ has raised extraordinary sums for charity through her distance riding and has a huge following. Just as she releases a second book about her late beloved mount Johno, she has found a new horse – or it found her. Share the joy.

Genetics have always been important to Heath and Rozzie Ryan. Few in Australia can match the lineage introduced by Jive Magic – but it wasn’t always obvious. When Rozzie started riding the imported stallion, it was like “trying to ride a bowl of spaghetti”. Jive became an outstanding GP star and sired many amazing horses, notably Rozzie’s prized Jarrah R. As she now passes on Jarrah to her sister, Rozzie reminisces about their wonderful journey.

Another successful graduate of Ryans is three-time Adelaide five-star winner Hazel Shannon. After 12 productive years, she has moved to Willinga Park, the first eventer to base there. She shares with us her excitement about the move and competing on WillingaPark Clifford at Pau this month.

Heath, meanwhile, continues to analyse dominant bloodlines at the Olympic level, and in Ryan’s Rave this month he looks at the emerging powerhouse nations and the genetics of the horses that bring home the medals. Watch out for the Brits, the Germans… and the Swedes, he says.

If you think the name ‘Cage Fighter’ sounds more racehorse than aristocratic eventer, you’re right. After a modest racing career, ‘Cagey’ was regarded as an honest plodder until he began his second career as an eventer. Young rider Sam Woods has tapped the true stayer in him to take out the CCI4*L at Sydney International 3DE earlier this year — lap it up.

The post-racing lives of thoroughbreds are being improved by many schemes of late, including Racing Victoria’s Diagnostic Imaging Subsidy Program. We delve into its roll-out and find that it really is giving trainers and their horses a genuine helping hand.

With spring activity in abundance, training, feeding, foaling and health issues all command attention. Kerry Mack reminds us of the wisdom of “ask less, reward more” when it comes to training. Vet Maxine Brain fills us in on caring for lactating mares, while the experts at Hygain and Virbac raise our antennae on feeding and seasonal issues to be aware of heading into summer.

Don’t forget to check your streaming service for some dismounted entertainment after you read Suzy Jarratt’s latest Horses in the Movies instalment. Suzy reviews the family fave Racing Stripes, and as always, reveals the Australian connections. Enjoy!

Time to unlock the gate and ride on! EQ