A horse’s body is a finely balanced powerhouse that can accomplish incredible feats and withstand great strain, but it can be undermined when something disrupts that balance. Some of these interferences can be easily identified, while others can be completely invisible, leaving owners baffled as to what could be causing the symptoms. 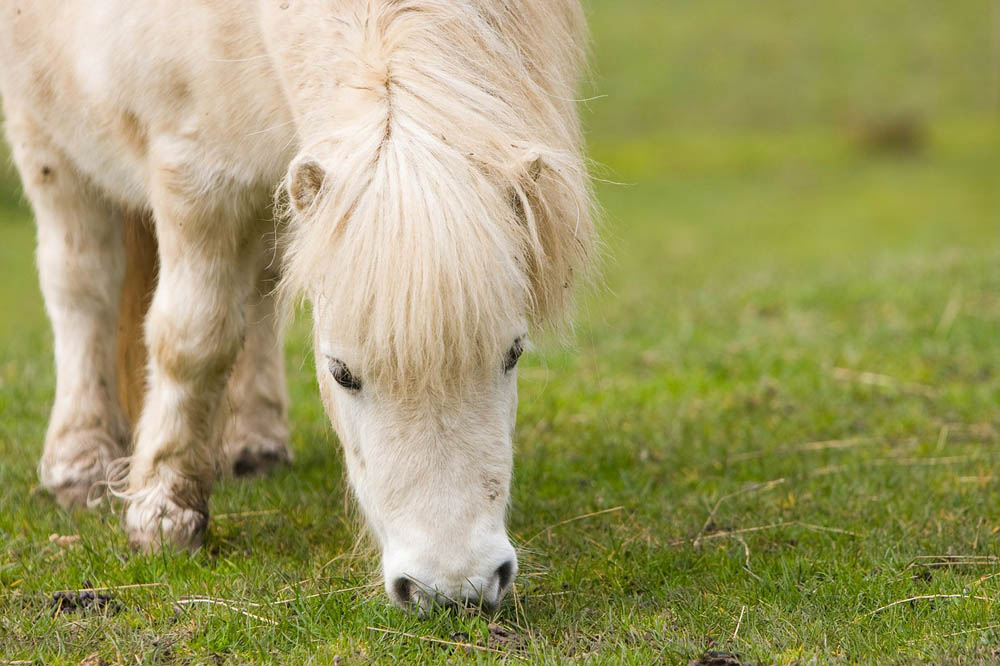 Mycotoxins can be found in fungus that grows at the base of pasture.
Click here to make the switch to Hygain’s Allcare.

Equine nutritionist for Hygain, Holly Mills, says it can be very common and easy for horses to ingest mycotoxins. “Mycotoxins are produced by fungus that can pretty much grow on any kind of feedstock that horses eat,” Holly explains. “It could be on pasture, it could be in hay, it could be on the grains or in the bagged feeds.”

As the name suggests, mycotoxins are definitely not something that you want sitting inside your horse’s body because the outcomes can be potentially serious. “Mycotoxins enter the horse’s system by being ingested and then they can enter the bloodstream, usually through the hindgut and through the gut wall,” continues Holly. “One symptom that can be common and quite severe is ‘ryegrass staggers’, which is actually caused by mycotoxins. Sometimes it can be more subtle, such as aggressive behaviour or irritability, hot fizzy behaviour. Even ulcer-like symptoms, if they’re feeling girthy. It could even show up as photosensitivity. So, if you’ve had a horse that’s never been sunburnt before and it’s getting sunburnt all of a sudden, that’s potentially something you could look at. And death is a possibility.

“There’s a massive list of different types of mycotoxins and the different types of fungal moulds, but they do each affect the horse differently. Different areas or climates at certain times of the year will have different mycotoxins in abundance. It’s important to note that different horses are more susceptible than others, and at the moment we don’t particularly know why that might be. Potentially, that horse might have another issue going on or they just are more susceptible. Also, there could be 10 horses in the paddock and only one of them is affected, so don’t just rule out the idea of mycotoxins if not all the horses are showing the same signs.”

Because mycotoxins are so abundant and hard to identify, Holly says it can be very difficult to manage or prevent your horse from ingesting them, but there are some preventative steps you can take that may help. “What makes mycotoxins quite difficult is that you can’t see them, smell them or taste them. And neither can the horse. So, it’s very difficult to know and expensive to find out. With pasture, if you are someone that suffers from ryegrass staggers in your area, one of the ways you can manage it is just not letting the pasture get eaten down too much because down the bottom of the grass is where you’ll find those toxins are produced. But unless you know what is causing your issue, it is very difficult to prevent or manage it.” 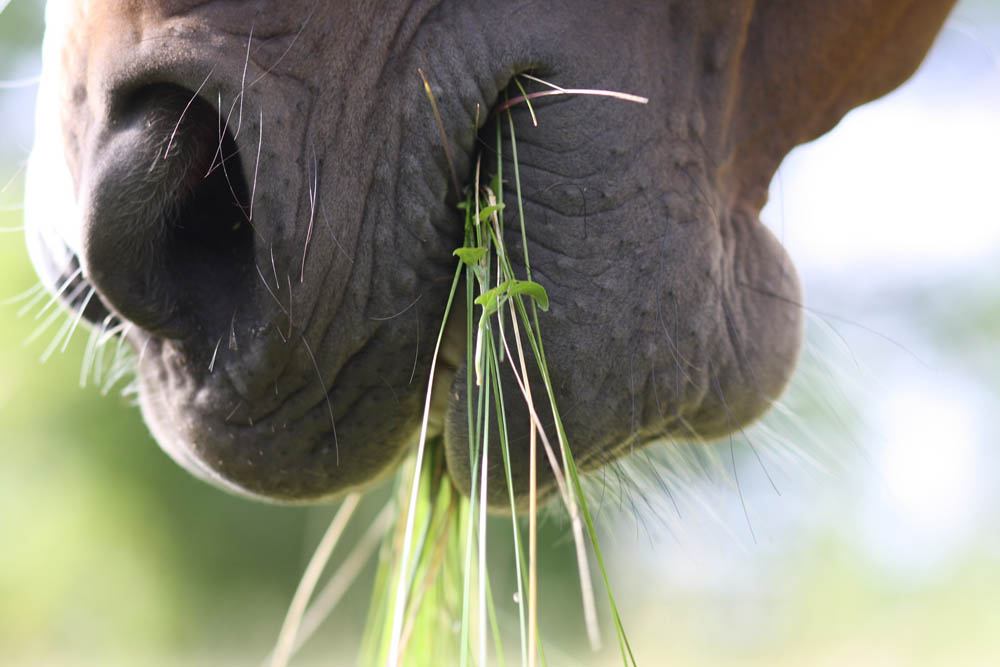 Mycotoxins enter a horse's system through being ingested.

“Different horses are more
susceptible than others.”

TOXIN BINDER TO THE RESCUE!

Now you know there’s a good chance your horse has some nasty mycotoxins buzzing around inside their body, how do you get rid of them? “I tend to tell people, if you think there’s something a little bit off about your horse, and you really can’t put your finger on why it’s occurring, try a mycotoxin binder,” explains Holly. “In the digestive system, the mycotoxin binder will attach to a toxin and make it inert, or not able to harm the horse, and allows it to just leave through the manure. It basically holds the toxin’s hand and says, ‘let’s go’.

“There are several different kinds of mycotoxins binders. A product Hygain produces called Allcare uses a yeast-based toxin binder. But you can get a clay-based toxin binder or even mineral-based toxin binders. They do all have sort of slightly different effects, but they all do bind. I can’t always guarantee it’s going to work because the symptoms are quite not specific but it’s always worth a shot. And the results when you do have them on a toxin binder is generally pretty quick.” 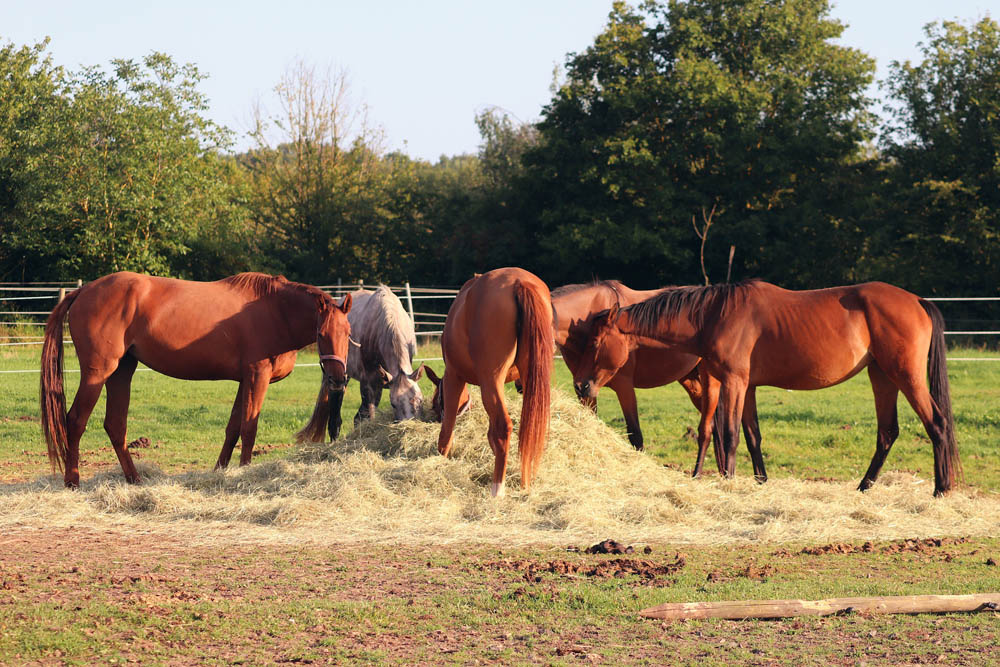 Whether it's pasture, hay, or bagged feed, mycotoxins can be found everywhere. 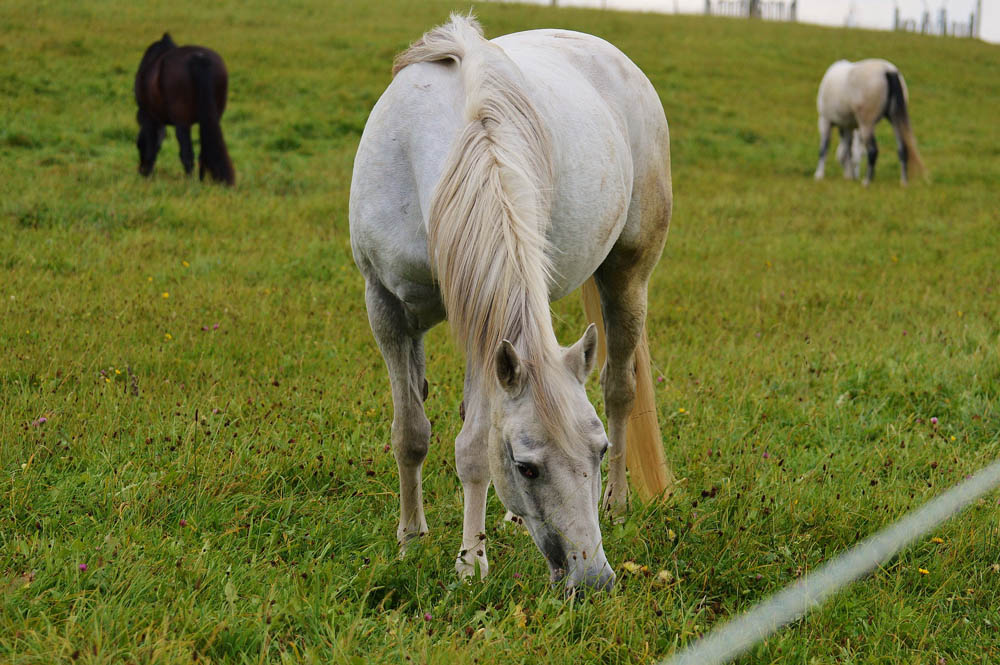 Some symptoms of your horse having mycotoxins in their system are being irritable, girthy, or photosensitivity. 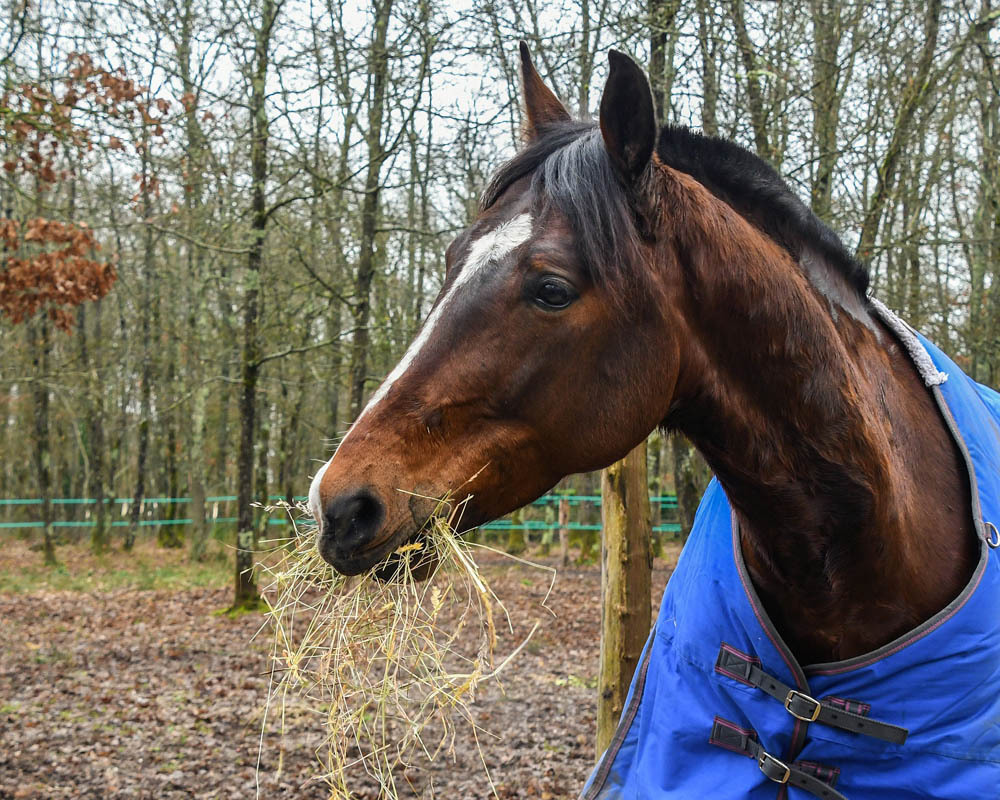 As most equestrians know, it can be a real challenge in ensuring their horses get all the vitamins, minerals, and extra helpers such as toxin binders they need without having to mix a dozen different supplements every feed time. The beauty with products such as Hygain’s Allcare is that it simplifies that feeding regimen, giving you the peace of mind that your horse is really getting everything that they might need all in the one product. As Holly explains, “Allcare is a fully fortified vitamin and mineral supplement designed to meet the needs of a horse alongside their roughage requirements. One hundred grams per day would meet the requirements of horse maintenance or in light work, and then we can always increase from there to 150-200 grams if they’re in quite a bit of work. Not only does Allcare also have that toxin binder to get rid of mycotoxins, but it also contains Bonafide, which helps assist the horse’s bone density. It does also contain fenugreek which may cause uterine stimulation, so you shouldn’t feed it to your pregnant mares.” 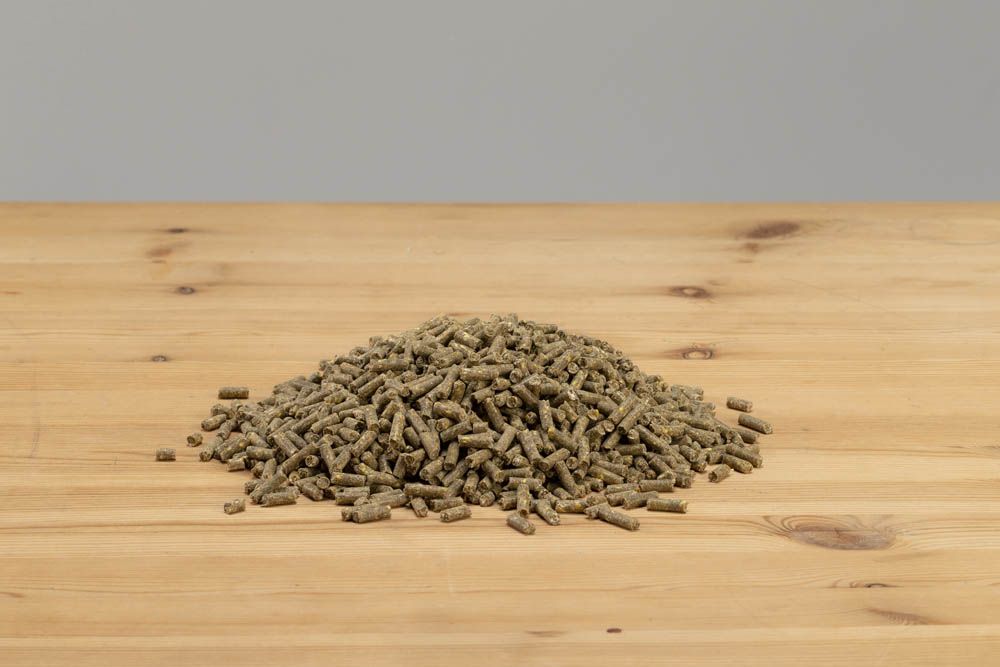 Hygain Allcare pellets contain a toxin binder that will allow mycotoxins to pass harmlessly through the horse's system.

Shaneen owns a Warmblood and a Thoroughbred that require a consistent intake of those important ingredients to their diets to keep their big bodies happy. “I used to have half a dozen supplements to mix with my horses’ feeds morning and night,” she says. “It was cumbersome and expensive, especially when the supplements had to be fed over two feeds at different doses for different horses. There were the vitamins and the minerals, the hoof supplements, the salts, the oils, the probiotics, the pellets and the joint supplements. Now they get 100g of Allcare with chaff and soaked beet. Life is simple. My bank balance is healthier. I’m not worrying any more that all the different supplements needed were also causing an overload of certain ingredients found in each. My 10-year-old daughter can now mix the feeds without any help, and I sleep better because I’m not concerned about the balance of nutrients. 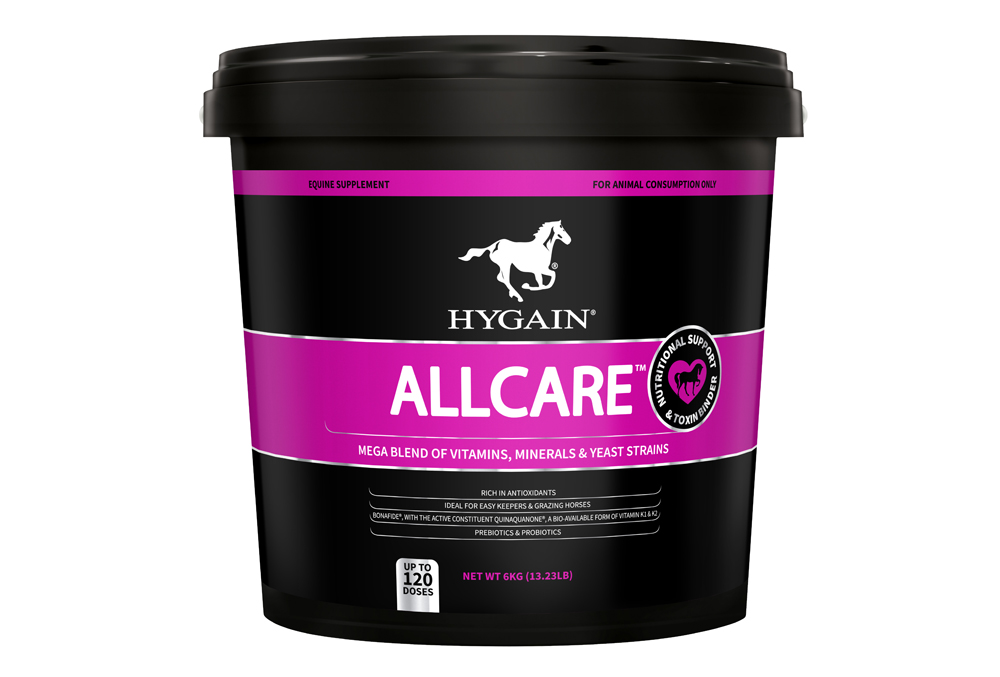 Allcare simplifies the feeding process by holding all the vital vitamins and minerals, as well as a toxin binder, in one supplement.

“My Warmblood gelding has lost the excess weight that he always seemed to carry, and my Thoroughbred gelding has gained an appropriate amount of weight. Both horses have more energy and staying power when working and they look amazing. They are brighter in themselves and some of the irritable behaviour that my Warmblood had has disappeared. They’ve been on Allcare since about mid-April and the results are good. I’ve tried complete feeds before but they all caused the Thoroughbred to be too hot and fizzy, and they made the Warmblood too sharp and spooky. Hygain Allcare gives them everything they need and keeps their nervous systems ‘normal’. My nine-year-old’s tail has grown past his hocks for the first time in his life, and it is so much thicker now.” EQ

This article was written in conjunction with Hygain. You can find out more about Allcare here.