BY ELLIE JOLLEY
content placeholder
Show jumper James Arkins is off the USA with stallions Eurostar and Joevaro. © Stephen Mowbray.
Previous
Next

With the FEI World Championships just around the corner, Australian show jumper James Arkins is about to embark on a trip to the USA with his two stallions, Eurostar and Joevaro, in a bid to gain exposure on the world stage and capture the attention of team selectors. Travelling alongside an exciting team of other riders, James is looking forward to experiencing some of the biggest events the country has to offer with the support of fellow Aussies. 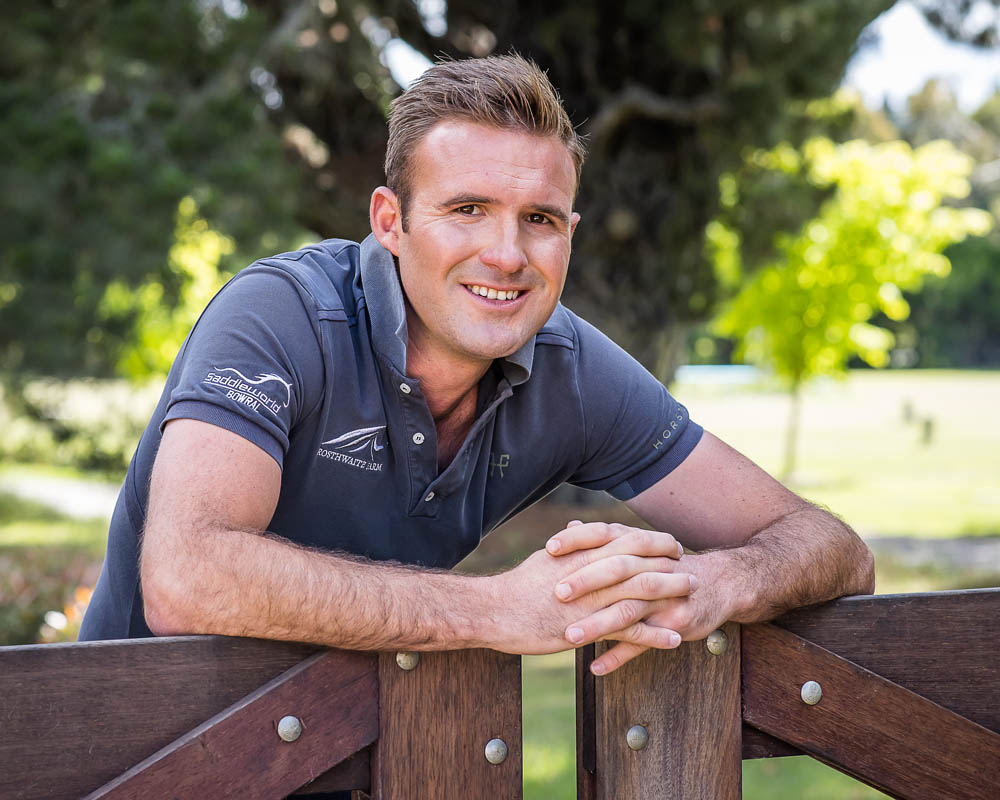 James has enjoyed growing his business at Rosthwaite Farm during the break from competitions. © Stephen Mowbray.
Click here to find out more about 4Cyte’s range.

“James has a great rapport
with Joevaro and Eurostar, having
produced both stallions himself.”

“It’s probably affected me in a better way than a bad way in some regards, and the timing has been good,” says James Arkins of the impact Covid-19 has had on his life in the Southern Highlands of New South Wales over the past 18 months. James has been one of the lucky ones who has benefited from a little more time at home, as it’s allowed him to develop the business at his family-owned Rosthwaite Farm.

“We started a riding school about four years ago, and that’s just gone crazy during Covid, as people weren’t able to travel internationally and instead travelled locally to places such as the Southern Highlands,” he says. James admits that originally the riding school wasn’t something he was as invested in, purely because his time was taken up with the show jumping side of his business. A lack of local competitions during the pandemic has changed that, allowing him to spend more time on the farm developing the riding school. He says their recent holiday program could have sold out threefold.

“[The riding school] has turned out to be the best thing I’ve ever done. We’ve got a lot of young riders that are coming through who are riding well and starting to transition across to the show jumping side and going to shows with me. One of my clients that came through the riding school is now buying young jumping horses… and so it’s complementing the jumping side of the business really well.”

James says that pre-Covid, he used to ride a large number of horses for clients, many of which were sent to him to be sold. “Now I just have a small, quality team of horses, and I teach a lot in the riding school,” he says, adding that it’s a balance he’s enjoying.

James is well aware that luck has been on his side in terms of timing; had Covid hit three or four years ago when his previous top horses, Rosthwaite Vigilante II, Da Vinci’s Pride and Aveden Indigo, were competing, the break would have just about taken them to the end of their careers. With his current stars, Joevaro (owned by James’ family) and Eurostar 1 (Diarado x Chacco-Blue, owned by James’ family in conjunction with the Douglass family), being still so young, the break has been welcomed. “Eurostar was a seven-year-old just before Covid hit and he was already jumping 1.45-1.50m tracks… he’s had a couple of months break, which was probably good for him.”

While missing competitions was disappointing, James is thankful to have had the time to better establish his business – and in turn, it’s made his imminent trip to the USA possible. “It’s put me in a comfortable position where I can now do this trip and it’s not going to be as enormously financially draining as it could have been.” 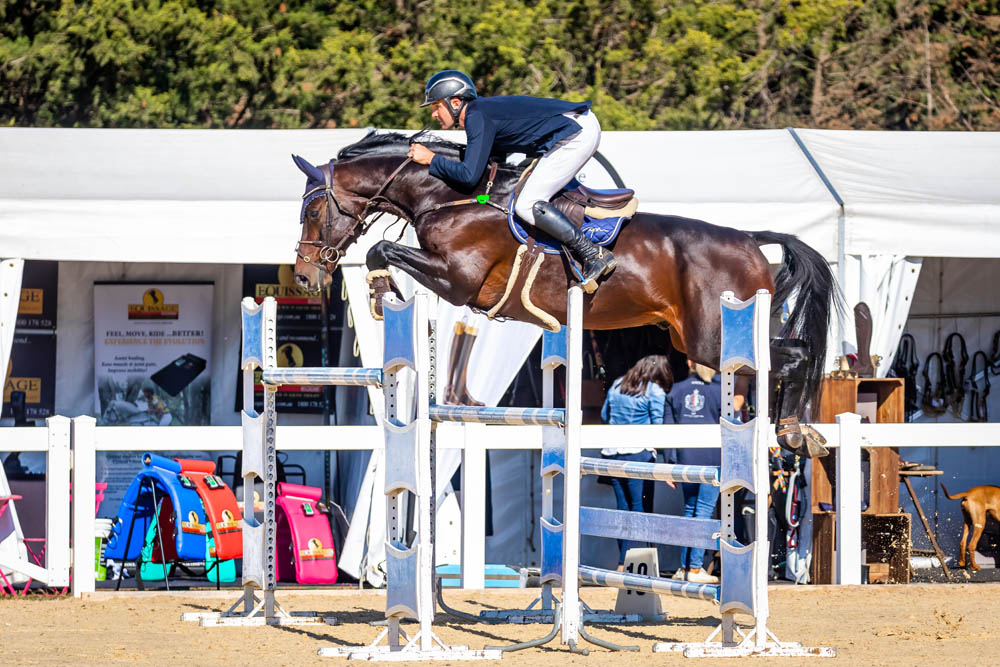 James and Eurostar on their way to winning the Victorian senior title earlier this year at Werribee. © One Eyed Frog Photography. 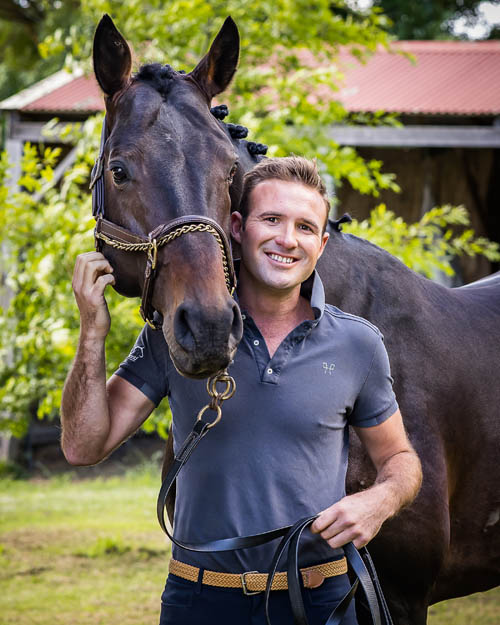 James and Eurostar (Diarado x Chacco-Blue), who is owned by his family in conjunction with the Douglass family. © Stephen Mowbray.

With Eurostar too young to qualify for the Tokyo Olympics, the 2022 World Championships (formerly the World Equestrian Games) in Herning, Denmark, has always been the goal with the now nine-year-old stallion. In terms of getting qualified and then hopefully selected, James sees an overseas stint as the best way to achieve that. Eurostar and Joevaro are due to fly out mid-December, with James to follow just before Christmas.

“It was Dave Cameron’s idea and a few of us jumped on the bandwagon,” says James of the upcoming trip. “Dave, [his partner] Tallara and a couple of their students are going, as well as Michelle Lang and her daughter Maleah Lang McMahon. “Initially, I just didn’t know how it would happen… at the moment, I’ve got such a great business running at home, I didn’t want to go and abandon all my clients and then destroy what I’ve been working on. But I thought more and more about it, and I spoke to a lot of my clients… they were all very supportive and said I had to do it.”

In terms of Eurostar’s chances of making the Australian team for the World Championships, James feels the horse’s preparation has been great; earlier this year, he won the Victorian senior showjumping title, finished fourth in both the World Cup classes at Werribee and Caboolture, and was tenth in the World Cup class at Gatton. James feels it’s now a matter of getting out there on the world stage and hoping he performs as well as he believes he can.

James has a great rapport with both Eurostar and Joevaro, having produced both stallions himself. “Euro was broken in when he came, but I started Joevaro. They’ve been on the circuit here from four-year-olds and have come right through the grades. They’ve also both been quite widely used as stallions here in Australia, and they will both have progeny out and about soon.”

Joevaro hasn’t competed as much as Eurostar despite being a similar age, but James says he’s stepping up really nicely. “I think it’ll be nice to have Joevaro in the US to support Euro a little bit; it means there won’t be so much pressure on one horse. My [plan for Joevaro] is to try and get him potentially ready for the Paris Olympics in 2024, and I think that this trip will be really good mileage for that.”

The Aussie contingent heading to the USA plan to base themselves in Ocala, Florida, which is the home of the newly developed World Equestrian Centre and many big competitions. The plan is very much fluid, but at this stage James thinks he’ll compete there and might also attend some of the nearby HITS Ocala Winter Circuit shows, as well as travel south to Wellington for the Winter Equestrian Festival at Palm Beach International Equestrian Centre – a prestigious series of events that run from January to early April and attract some of the sport’s biggest names from around the globe.

“I’m pretty open to going with the flow a little bit and letting the horses tell us what we need to do. If it’s looking like we’re going really well and we’re in contention for the World Championships, I’ll come home and the horses can stay there and have maybe a month off.” James says this would give him a chance to catch up with his clients in Australia before heading back over to the USA and then possibly on to Europe if all goes well.

While James is hopeful that he’ll bring both horses back to Australia, he’s also pragmatic about the possibility of selling if the right opportunity arose. “I definitely won’t leave both there, but if a good opportunity arose to sell one of them there I’d consider it… but I’d also be very happy to bring both home.”

James has his sights set on the 2022 World Championships in Herning with Eurostar. © One Eyed Frog Photography.

“Winter in Florida is much
better than in Europe!” 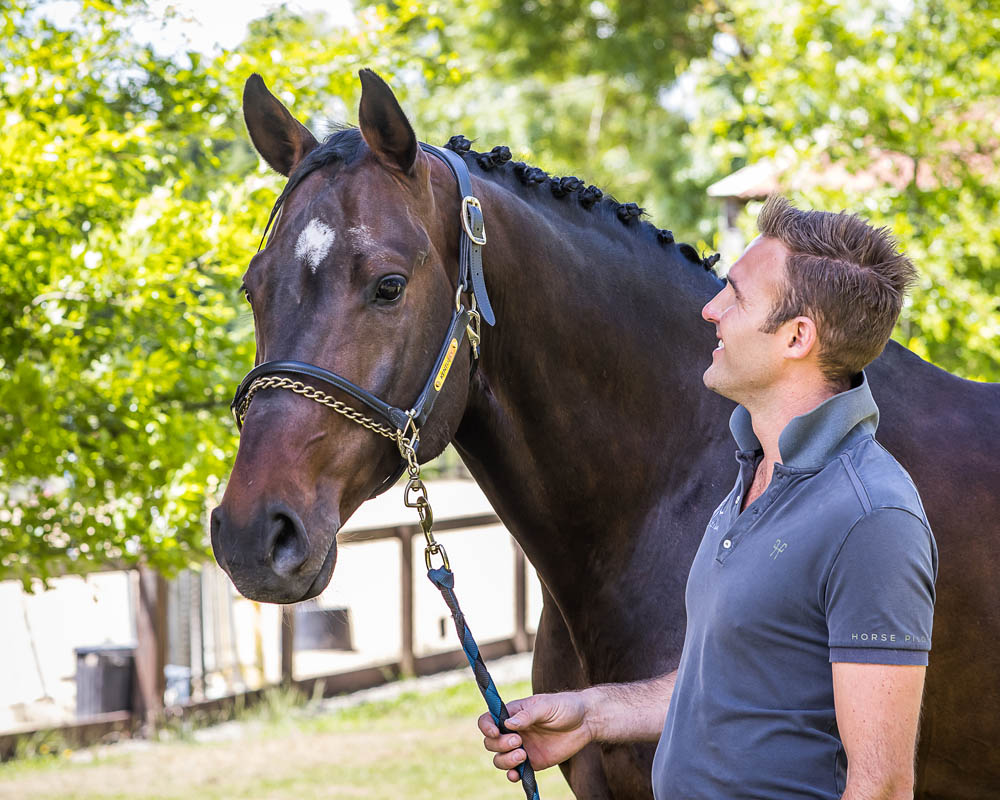 It’s not the first time James has been overseas to compete. He’s been to New Zealand on multiple occasions, and in 2015 he took Rosthwaite Vigilante II and Aveden Indigo to Europe with the dream of making the team for the Rio Olympics.

“I flew to New Zealand first as there was good prizemoney there; I won $50,000, which paid for a lot of the Europe trip,” he recalls. James then spent nearly five months in Europe and competed extensively, winning two CSI3* classes with Avenden Indigo and placing third in a CSI3* Grand Prix in France with Vigilante. Unfortunately he wasn’t selected for the Olympic team, but the experience gave him important insights into campaigning for major championship team selection and there are lessons from the trip that he will now take with him to the USA.

“It opened my eyes a bit to how it all works, and I’ve got a better idea of what needs to be done. I’m a bit more experienced now.” A realisation for James was that when you’re vying for selection, you can’t sit back and hope for the best – you have to be actively involved and take things into your own hands a little more: “This time I want to take control of it a bit more myself, and ask the questions of what needs to be done rather than wait to be told.”

“One thing I’m really looking forward to about the American trip is that we’re going with a really nice team of people,” says James, explaining that his time in Europe, while invaluable from a learning perspective, was a somewhat lonely period and he didn’t love the lifestyle – despite visits from friends and wonderful help from fellow Aussie show jumping expats such as Amy Graham.

“The reason why I chose America over Europe this time are, one, the great Australian contingent we have travelling together and two, the weather. Winter in Florida is much better than winter in Europe!”

Equestrian Life wishes James and the rest of the Aussie contingent the best of luck in the USA and we can’t wait to follow their progress! EQ