Everyone has their ‘heart horse’, and Zidane is mine and much more. He picked me up when life threw me the biggest curveball and then took me on a journey that gave meaning to both our lives. 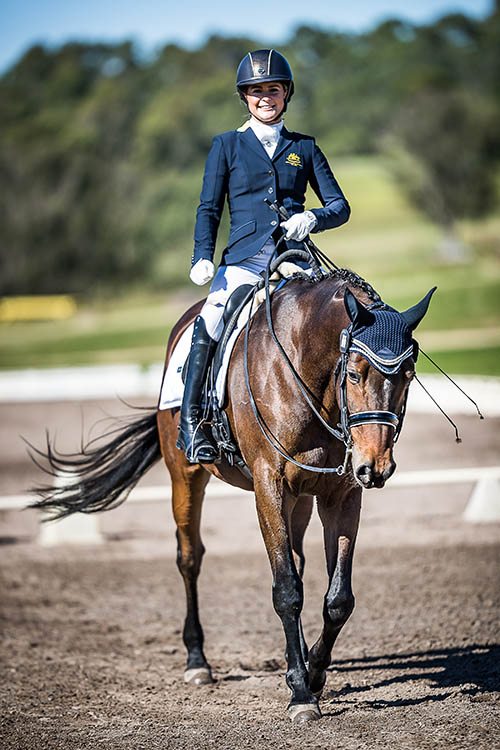 Emma is all smiles after competing with Zidane at Boneo Park. © Stephen Mowbray.
Formulated to deliver a low starch, high fibre complete feed, Pure Vitality is the perfect feed for mature horses of any discipline.

There aren’t the words to accurately describe the relationship formed between myself and this unicorn, Mogelvangs Zidane. But what I will do is try and tell his story – which will not seem adequate – but hopefully will give you an idea of what this horse has achieved, and in turn helped me achieve. Zidane became the legs that literally and metaphorically carried me when my own couldn’t anymore. He inspired me and in turn gave others hope. Let me try and take you on our journey around the world.

Zidane was born in Denmark in 2002, by Blue Hors Hertug out of Valdiva (Manstein). As a four-year-old, he was trained at the same facility as the amazing Cassidy, owned and campaigned by Olympian, Cathrine Dufour. Katerine Sandholt was his owner in Denmark and she did a tremendous job in producing such a wonderful horse. They formed a truly wonderful partnership before he was sold to Australia. Zidane was imported by Victorian-based dressage rider Petra Lee, who successfully competed him to Prix St Georges level, with the guidance of State Victorian Dressage Coach Lone Joergensen. It was actually Lone – the fabulous Danish Olympian who relocated to the Mornington Peninsula in 2013 – who then brought Zidane and I together.

I remember Lone asked to speak to me after presentations at the Victoria Dressage Festival in December of 2015 – the first of three qualifying events for the Rio Paralympics. Lone knew I was in the market should the right horse come along and told me I needed to come and have a sit on this horse.

So needless to say, I went to see and ride Zidane at Lone’s a couple of days later. Without it sounding like a cliché, there was an instant understanding and connection between this beautiful bay Danish Warmblood and I. I knew at that moment he was the horse we had been looking for, and that we would compete together on the world stage in Rio.

When asked later how the idea to pair Zidane and I came about, Lone would tell Equestrian Life: “I knew Zidane was a good horse but that he also needed to be ridden well. I also knew that before Emma’s accident she had been doing eventing, so there was a riding skill there which needed the right horse. I saw Emma ride at Dressage Festival and thought ‘that could fit’. I had known Zidane for a few years beforehand and he has always shown his amazing character and honesty which, combined with his walk and trot quality, I thought he could be a very suitable para horse.”

“When I saw Emma and Zidane together for the first time, I didn’t have any doubts anymore.”

Only three weeks later, Zidane and I went to our first competition, which was a CPEDI*** at Boneo Park, and a qualifying event for the Rio Paralympics. He instantly proved himself as the incredible horse that he is by receiving the highest para scores of all combinations competing in all grades and broke the Australian record (at the time) for the highest score at an FEI event in our Freestyle, with a huge 79%. 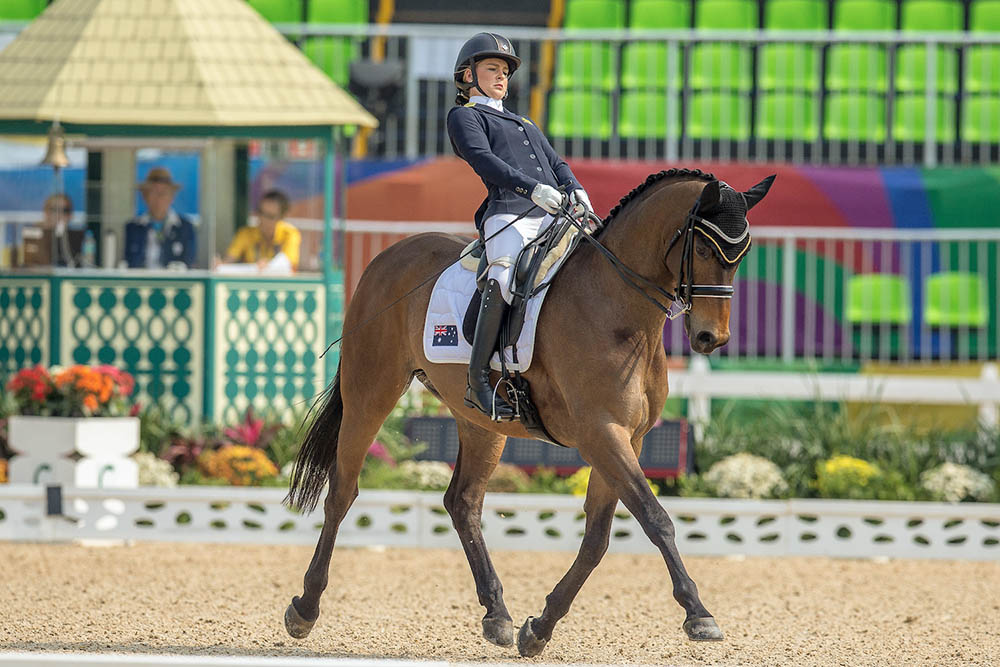 Emma and Zidane competing at the Rio Paralympics in 2016. © Eric Knoll.

Emma and Zidane competing at the World Equestrian Games in Tryon.

Rio was just around the corner and this experience changed my life. To finish top five in the world at the Paralympics, it was hard to believe that only three short years earlier I was fighting for my life in hospital and learning to live a completely new life in a wheelchair. This horse helped me achieve my goal of becoming a Paralympian, but also helped me inspire so many more to follow their dreams. This is a horse that will forever be irreplaceable.

In 2017, I thought our journey was going to come to an end when Zidane had to have lifesaving colic surgery. A benign tumour had wrapped around three portions of his intestines causing strangulation, which meant he required a large portion of his intestines to be removed. Again, this horse just proved what a fighter he is when he survived this incredibly huge surgery.

The 2018 World Equestrian Games were fast approaching, and we only just managed to get him there, as his surgical wound caused many extra challenges that we otherwise wouldn’t have had to overcome. He wore a sling around his belly 24/7, otherwise the swelling around the site of incision would become too enlarged. He then incurred a wound on his back from the sling slipping and rubbing! Something that not a lot of people know about is that this meant we went through a large period where I was unable to ride Zidane, as the saddle put pressure on the wound on his back. This meant he was only hand-walked, lunged, and put on the water walker to try and maintain the most base-level fitness possible.

It wasn’t until six weeks out from putting Zidane on a plane to fly to WEG in America (travelling via Europe) that I was able to start riding him a couple of days a week. This meant that we only had six weeks to get this horse fit and healthy enough to fly overseas and compete on the world stage.

He’s such a fighter and knew he had to step up when we got to Tryon, and that’s exactly what he did. I think he put forward two of the best possible performances he could have, especially given the uncertain lead-up and preparation we had. I honestly don’t think there are many horses out there that could have achieved what Zidane did after this colic surgery. A huge mention goes to Robyn Charman and the team at South Eastern Equine, as well as my incredible vet, Michael Tweedie, who helped manage every aspect of Zidane’s health and soundness leading into this event. Without his assistance I don’t know that we would have made it. 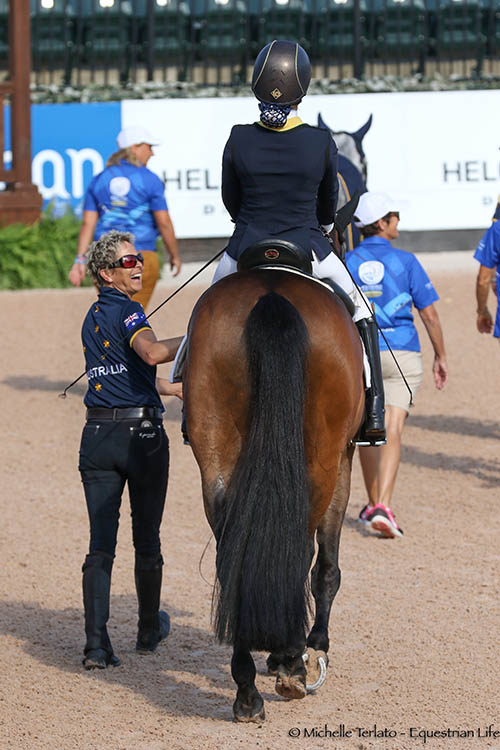 Lone Joergensen and Emma with Zidane at WEG in Tryon. © Michelle Terlato.

Again, placing fourth on the world stage after all the ups and downs we faced trying to get there, it was a huge accomplishment and something I will be forever proud of.

Our next challenge was to qualify for the Tokyo Paralympics in 2020, which we did. However, then Covid happened and both the Olympics and Paralympics were postponed for 12 months. This was HUGE – and unless you’re an athlete that was preparing to compete on the world stage, I don’t think you can truly comprehend the impact adding a year on to your campaign can have. Add into the fact your horse is 19 years old, it was less than ideal.

So not only did we have to keep Zidane sound through an extra year during lockdowns, but we also had to redo all the qualifying events, including one interstate trip to Sydney. Being the trooper that he is, he overcame this added challenge in our Tokyo campaign.

After two weeks of pre-quarantine at Sydney International Equestrian Centre, the three Australian-based horses got on a plane and flew to Tokyo. Tokyo was a completely different Paralympics altogether given the impact of the pandemic. The Japanese did an extraordinary job in managing all the extra lengths that they had to go to for these Games to go ahead.

Lone Joergensen, who was the Australian Para-Dressage National Coach, says that performing at night under lights was just one of many testing conditions at Tokyo, but Zidane and Emma came through. 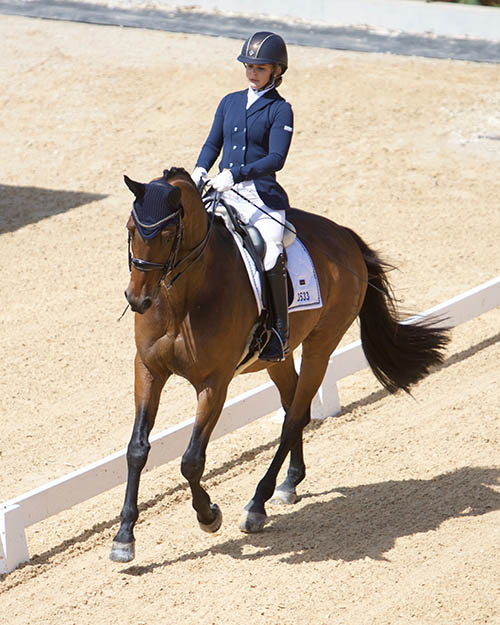 Emma and Zidane competing at Medium level at Willinga Park, where they finished in the placings. © Roger Fitzhardinge.

“There were a few little hiccups in the preparation leading up to Tokyo – that’s always the way with horses – which didn’t make it easy to perform in Tokyo. Also, the fact that all tests were under floodlights was unusual for all participants and we saw many horses being slightly distracted in the arena. Zidane did an okay first test with a few tiny mistakes, which no one can afford to make at this level. The second test was with an error from a bit nervous and almost over-concentrated rider!

“The final test in the Freestyle was the best test, in my opinion. Not really having ridden the test before because of no shows as a result of Covid, Emma did an excellent job and was spot on with the music throughout the whole test. It was not quite enough marks to get into the top three, but what a great test for Zidane’s final show in his career and going into retirement after many fantastic years.”

Zidane and I made Australian history by being the first horse-and-rider combination to compete at two Paralympic Games – an even bigger feat given there were five years between these games instead of the usual four. Again, this just proves how unique and special this horse is. No question is too big and no task too hard for him. He always wants to please and gets so much pleasure from getting the right answer. 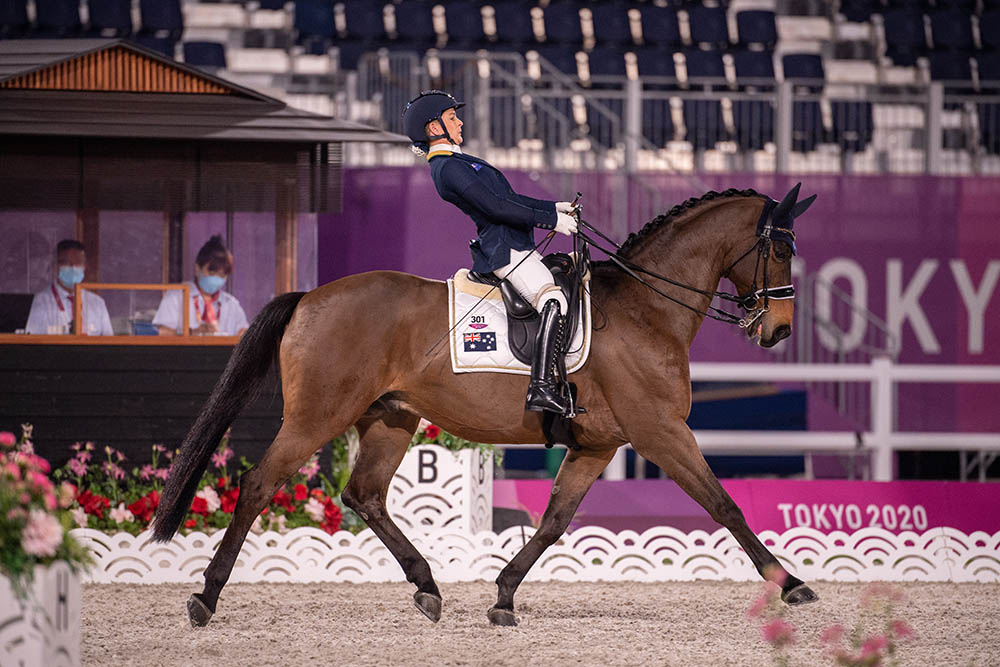 Emma and Zidane competing at the Tokyo Paralympics. © Jon Stroud.

“I was so proud to have made
it to the Games.” 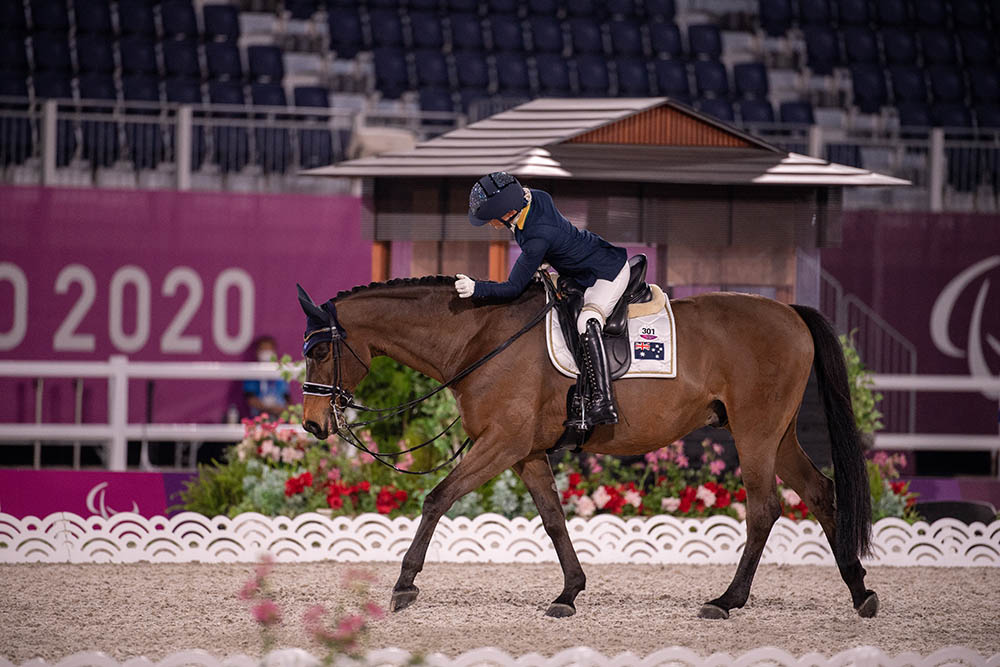 Shahira Ameen, Zidane’s long-term groom and biggest fan (after me), says, “Zidane is a one-in-a-million horse. His personality can only be described as having the best of both worlds. While he is a true gentleman who always looks after you, he also has a quirky side which makes working with him so enjoyable.”

In my opinion, I honestly don’t feel like we could have put forward a better Freestyle in Tokyo. The standard of horses is so incredibly high, but Zidane held his own amongst an incredibly talented field of horse and riders. I was so proud to have made it to the Games and to come away with fifth in the world for my grade; that’s a very special feeling – I am extremely humbled.

I can’t thank Lone Joergensen enough for bringing Zidane and I together, always believing in us, and supporting us through every high and low of our journey together. Also, a big mention to Equestrian Australia High Performance for assisting the process that is competing on the world stage and everything in between.

A best friend is someone who you can rely on – they are there for you through thick and thin, they are loyal and trustworthy, they cheer you up, they don’t judge you, you trust them completely, and you feel the bond you share is greater than anything else you know. Zidane is my best friend and will forever hold the most special place in my heart. I don’t know that I would have made it through the past six years if it wasn’t for him.

If you have read this far and are still not convinced that perhaps fate played a role in bringing Zidane and I together, maybe this last little detail will be enough to persuade you. The name “Zidane” comes from the Arabic name Zeid. It means “abundance” and “growth” – when translated it literally means “the one who progresses and helps others to progress”.