The first CDI in almost two years proved to be a thrilling springboard for a number of combinations staking their claims for a ticket to the FEI World Championships in Denmark this year. 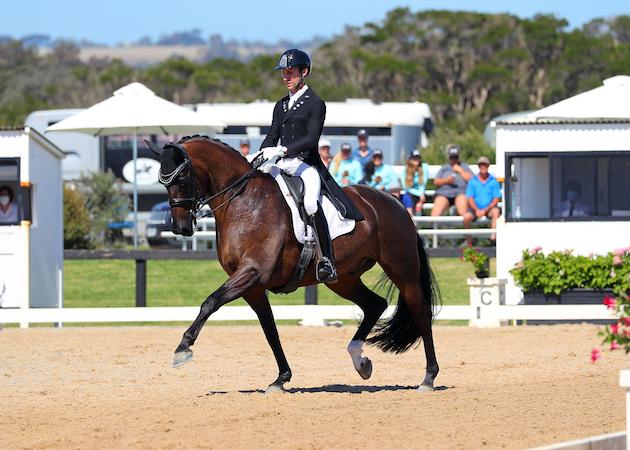 Jayden Brown and Senator Nymphenburg (owned by Rose Deo and Jenny Gehrke) won the CDI3* Grand Prix Freestyle and also achieved an FEI MER in the Grand Prix for the World Championships in Denmark later this year. © Angie Rickard Photography.
Click here to find out more about 4Cyte’s range. 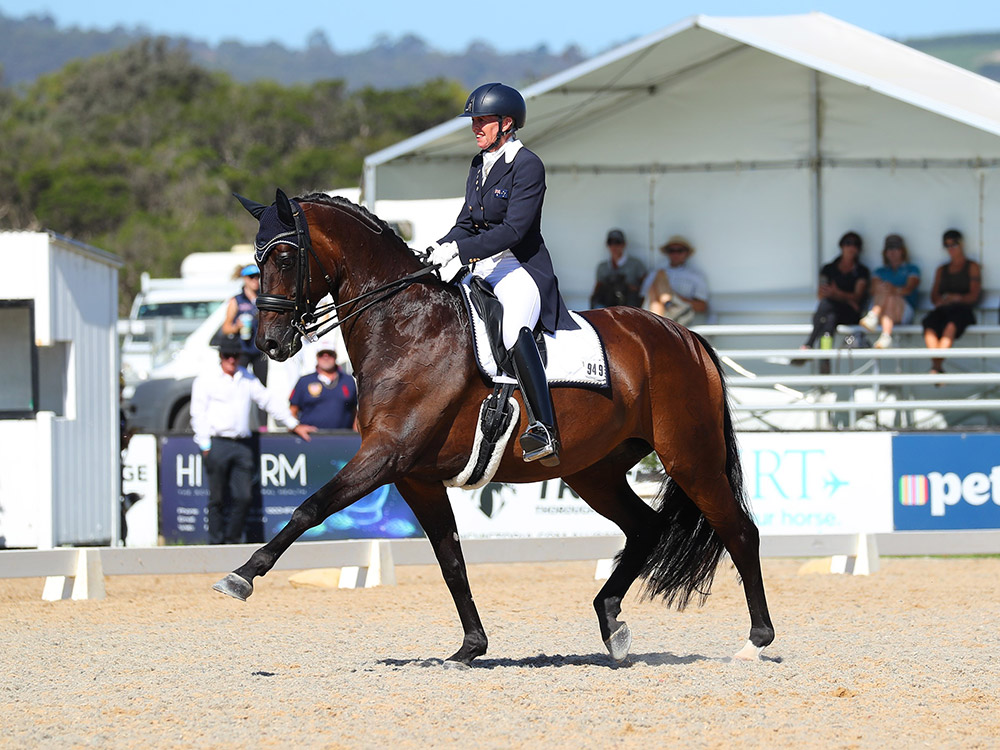 There was much excitement in the air for riders and spectators alike as the 2022 Homes and Acreage Summer Dressage Championships signalled the return of CDIs to Australia at Boneo Park in late January.

To overcome Australia’s Covid restrictions on overseas visitors, it was the first CDI to be held here without international judges on the ground. An online FEI Judges Supervisory Panel (JSP) of remote judges was instead assembled to determine if the scores that combinations achieved would make them eligible to compete in the ECCO FEI World Championships (Herning, Denmark, 6-14 August). The JSP was facilitated by Fiona Selby and the hardworking team at Boneo Park, while the technical elements were a joint effort between Equestrian Life, 5Stream and BlackHorse (eDressage).

With the FEI’s current Minimum Eligibility Requirement (MER) for the World Championships being two scores of 66%+, the Summer Dressage Championships saw two Australian riders and one New Zealander attain their first score following the JSP’s validation of results.

And for New Zealand:

It was a nail-biting finish for the Grand Prix CDI3* and a rare occasion for combinations to be finishing with scores above 70%, especially given there were moments marred by tension affecting a couple of movements for both Mary Hanna and Jayden Brown. This is to be expected with so few competitions in Australia over the past two years, and with more events to come we expect to see their scores improve even further. It seems the sky is the limit for these combinations!

The JSP was an initiative approved by the FEI to assess whether results are valid to count as MERs at events without the international judges normally required, ensuring the level is up to the standard for competing at the World Championships. Another three combinations were awarded results over 66% on the day, however these results were unfortunately not validated by the JSP.

Australian five-star FEI judge Susie Hoevenaars, who judged for the CDI3* Grand Prix, Special and Freestyle, praised the “exciting return” to CDIs. Although we did not see fault-free tests from the two top-scoring Australian combinations, being Mary Hanna with Syriana and Jayden Brown with Rose Deo and Jenny Gehrke’s Senator Nymphenburg, the quality was certainly present.

“Heading into the World Championships they want to hit the 70s and we have horses capable of doing that and more,” says Susie.

“The biggest barrier for the Australian riders is the lack of exposure to major competitions in comparison to Europe. We need to give them every opportunity to compete at a similar standard and support them, so they can represent Australia to their full potential.” 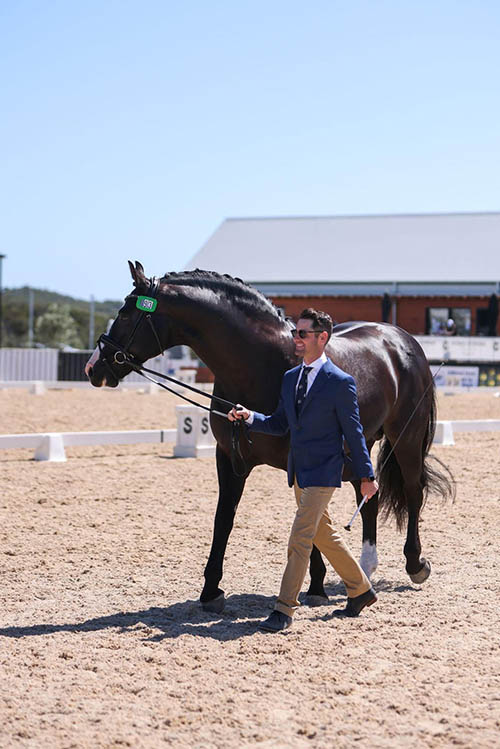 NZ's John Thompson and Chemistry (owned by Heather and Kate Kyros) achieved an FEI MER score for the World Championships.

MORE OPPORTUNITIES ON THE HORIZON

While we eagerly await the release of Equestrian Australia’s selection criteria, our leading combinations have two more opportunities in the coming months to gain further FEI MER scores and experience the electric atmosphere of CDI competitions. Willinga Park is staging its CDI in late February – also with the FEI JSP online system – and then P.S.I. Dressage & Jumping with the Stars (DJWTS) in March will have international judges attending in person to give the event CDI status.

Australian competitions may not have the volume of competitors at the standard they would find in Europe, however if the Summer Dressage Championships are anything to go by it looks like Australia is shaping up to have a very exciting team heading to Denmark with some competitors hopefully being able to qualify at home in Australia.

We all look forward to watching the four chosen Australian combinations at the World Championships in Herning this August. The Championships will follow the same format as the 2018 World Equestrian Games in Tryon, with the Grand Prix deciding the team medals and qualifying the top 30 riders for the Grand Prix Special. The Special will then see another series of medals awarded, and will also qualify the top 15 riders to compete for further individual medals in the Grand Prix Freestyle. We will be watching with interest as combinations vie for one of those elusive spots on the Australian team at competitions within Australia and overseas. 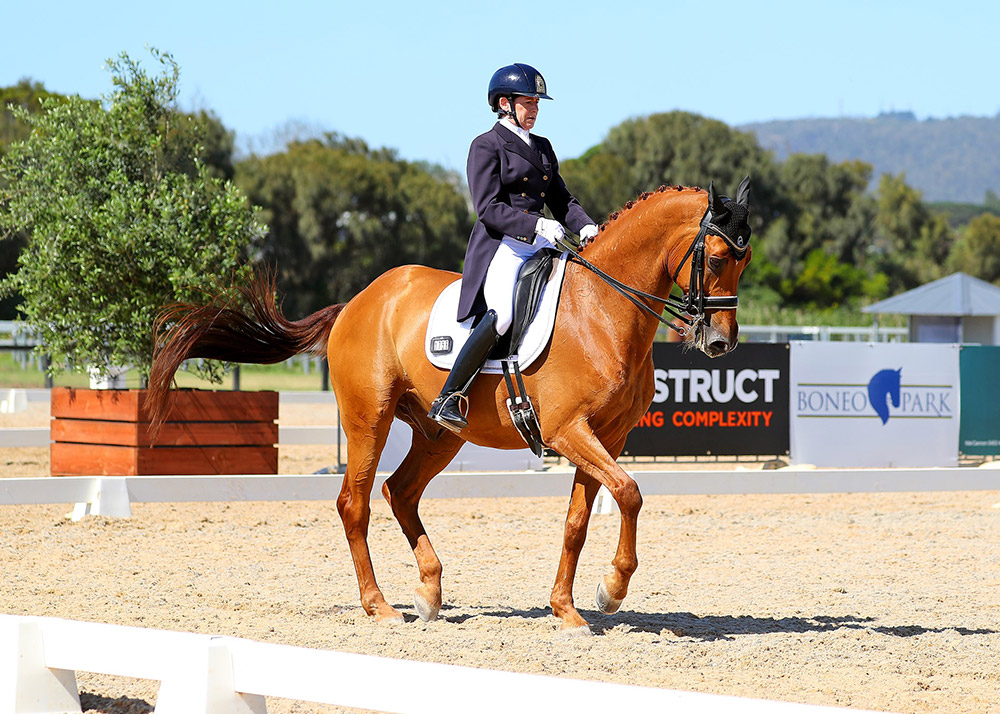 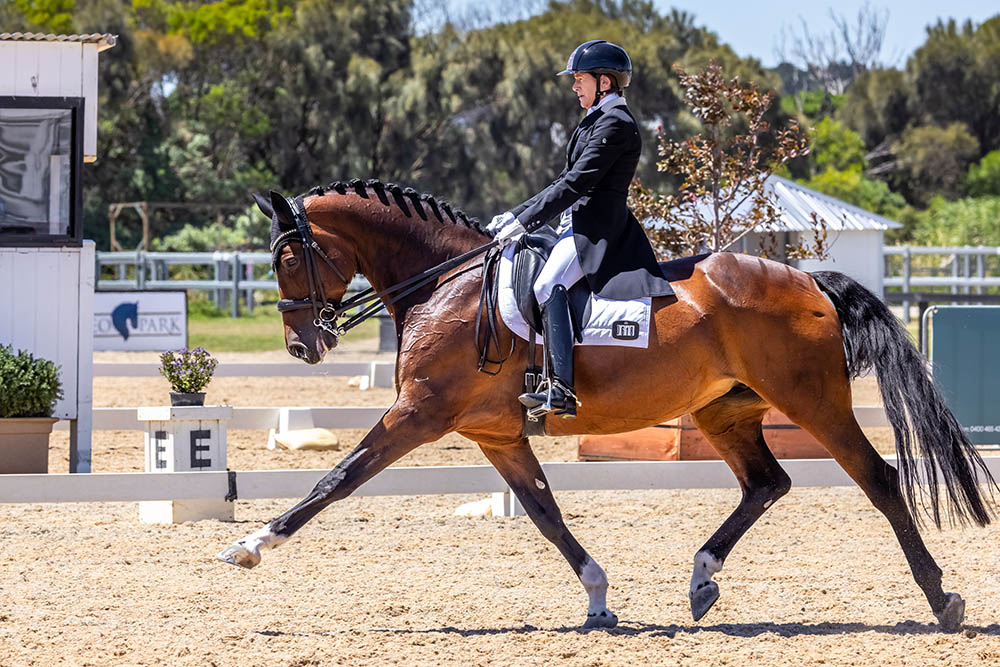 AN EXCITING CHAPTER FOR PAULINE

Pauline Carnovale and Captain Cooks (aka Cookie) finished fourth in the Grand Prix CDI3* with a fantastic score of 69.348%, which Pauline backed up with a 68.638% in the Grand Prix Special, keeping the competition on its toes. Pauline has also recently resumed the ride on Corinna, after the mare’s campaign for the Tokyo Olympics with her coach, Lone Jørgensen.

In the Intermediate II, they secured the win with a 70.490% and then scored 70.870% in the Grand Prix CDN, providing them with the qualifying scores they require to move into the CDI classes. Whilst Pauline currently has no aspirations of trying to get selected for Denmark, we look forward to seeing her and Corinna step into CDI classes at DJWTS.

With two very different horses, Pauline Carnovale is spoilt for choice between the gorgeous Cookie imported from Ben Conn, who “tries his heart out and is very rideable”, and the extravagant Corinna, purchased from Natasja Van den Bogaert, and who has a “lovely temperament” and movement to die for! Natasja also has a young gelding of Pauline’s by Blue Hors Zack, who is in training in Europe and currently showing talent for all the Grand Prix work.

Pauline is enjoying every ride she has on her beautiful horses, and who wouldn’t with such a lovely team and a beautiful property on the Bellarine Peninsula designed to cater for her four-legged partners. EQ

Results from the Homes & Acreage Summer Dressage Championships can be found here.

The next CDIs on the calendar are Dressage by the Sea from 22-27 February at Willinga Park, and P.S.I. Dressage & Jumping with the Stars at Werribee Park from 24-26 March. Equestrian Life looks forward to being part of the action and following the journey of these exciting combinations as they achieve their personal goals and perhaps even gain MER scores towards Denmark.