The Magic Millions have always glittered on the Gold Coast and now showjumping is stepping up to become a $1 million feature event at the annual equine carnival. 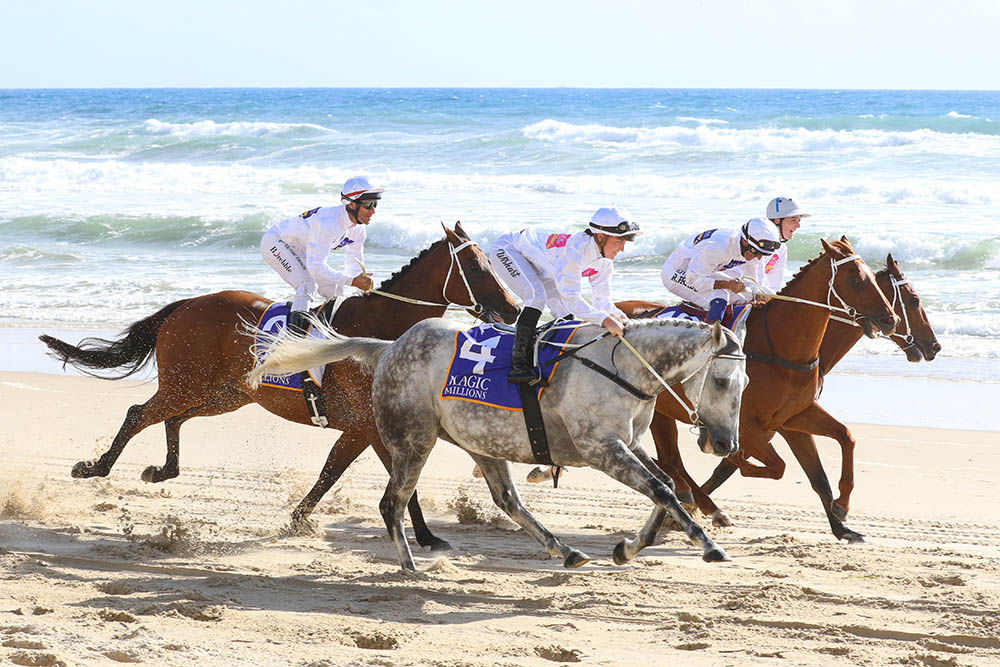 The Beach Race barrier draw on the Gold Coast sands is beamed around the world for its uniqueness. © Michelle Terlato Photography.
Click here to find out more about Barastoc’s Supreme. 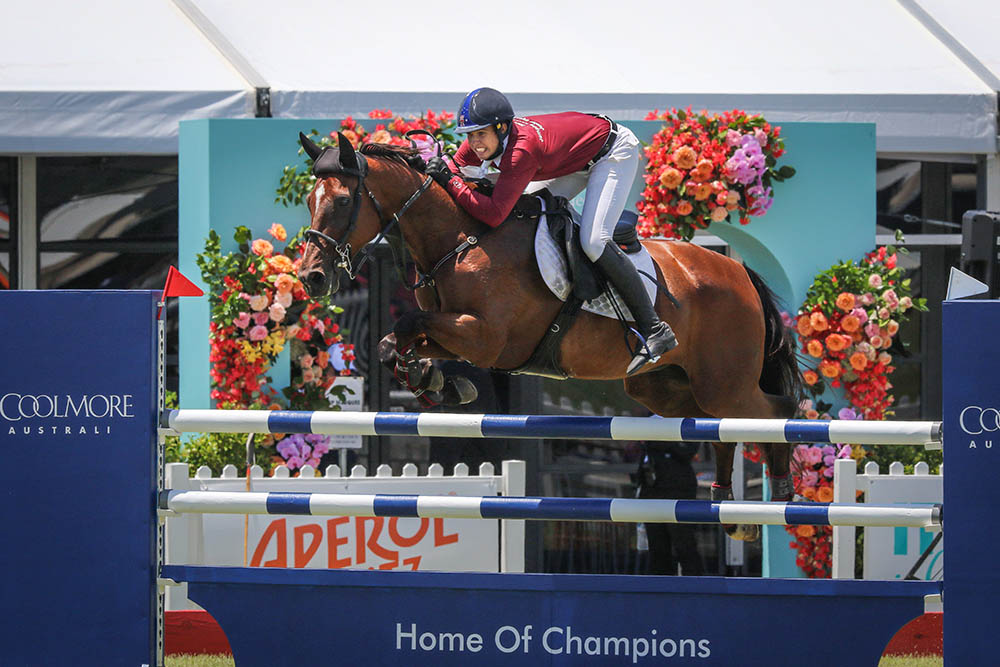 Magic Millions is familiar to most of us for its Yearling Sales, with famous trainers like Gai Waterhouse and Peter Moody browsing for their future stars. Highlights include the Race Series such as the Magic Millions Cup with $1 million prizemoney, the Beach Race barrier draw on the Gold Coast sands that is beamed around the world for its uniqueness, and celebrities playing polo, Fashions on the Field and even royalty attending. Zara Tindall, the Queen’s granddaughter, is an ambassador for the event, along with Rugby League superstar Billy Slater, newly appointed coach of the Maroons.

The event is much more than a day; it is an annual carnival that this year ran from 5-18 January, where an inaugural invitational showjumping event was incorporated with the traditional Sunday Polo Day. In mid-2021, George Sanna and Amber Fuller spoke of the possibility of such an event with Magic Millions co-owner, Katie Page-Harvey, and so the idea grew from there.

Like everything to do with Magic Millions, Katie wanted it staged at the “highest level,” and along with James Hetherington they certainly managed to achieve that. The perfect location choice was Doug Jennings Park on The Spit, right in the heart of Surfers Paradise. The polo field and showjumping arena shared the space with plenty of infrastructure providing a VIP area with a sit-down meal for 350 guests, a Pacific Fair Pavilion, beer garden, live music, food trucks, plenty of picnic tables and lots of shady spots for the 3000-4000 strong crowd that enjoyed the incredible atmosphere.

Being the first major jumping event of 2022 and offering huge prizemoney, many of the nation’s top showjumpers were in attendance. There were two jumping competitions: a Junior jump-off class with an $8,000 prize pool and a Senior Teams event with a huge $92,000 on offer. The teams were each assigned names by Magic Millions from the companies that were supporting them, such as Outback Spectacular, The Star Gold Coast and Tourism Events Queensland — and then team members were drawn randomly from a hat.

The juniors started the day in the event sponsored by Coolmore Australia on the course built by international course designer Graeme Watts. In the second-round jump-off, it looked like Emily Lang-McMahon on Glenara Mudslide had done enough going clear and fast. The Queenslander was almost celebrating when the young local rider Cody Ticknell on Continue went around in a thriller clear and very fast to take out the Junior title. Emily and Glenara Mudslide were second and Alexandra Inglis of NSW, on Diamond B Babybelle, were third. It was a wonderful morning for Cody’s supportive family all sitting ringside.

With the sky perfectly blue, it was the ideal time to have a wander, take a few selfies, do some celebrity spotting and enjoy an Aperol Spritz before the Seniors were underway. There were 32 riders in total in eight corporate sponsored teams. Some riders had travelled from as far as Victoria to join the NSW and local riders. The track was challenging, and in the end just six of the 32 achieved clear rounds; only one team achieved more than one clear, being the all-female team of Godolphin Lifetime Care. They finished the round on just 4 faults, the winning score. 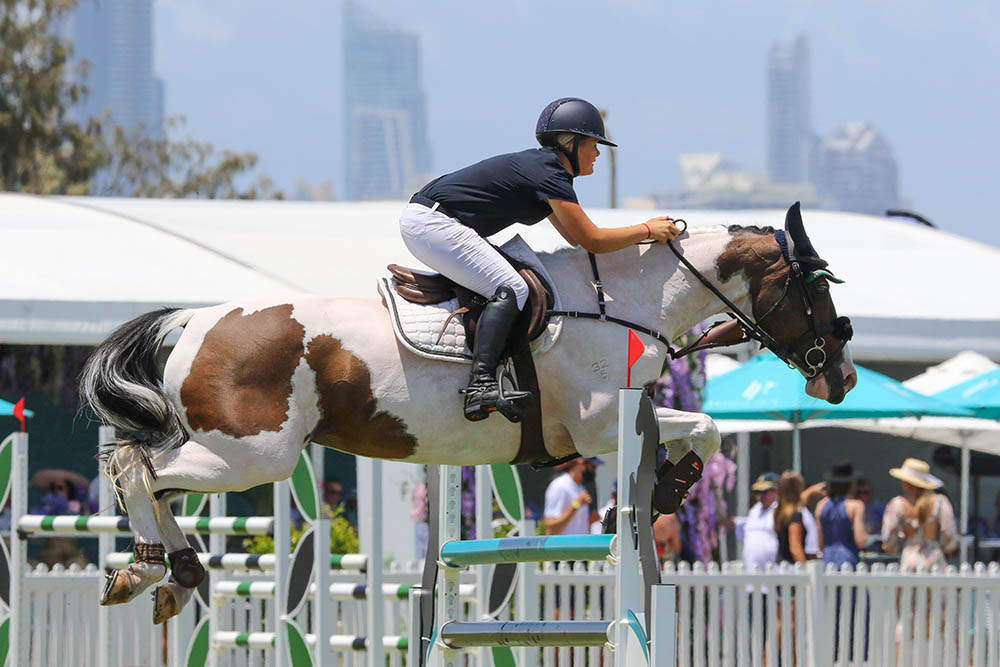 Emily Lang-McMahon on Glenara Mudslide were runners up in the Junior class. © Michelle Terlato Photography. 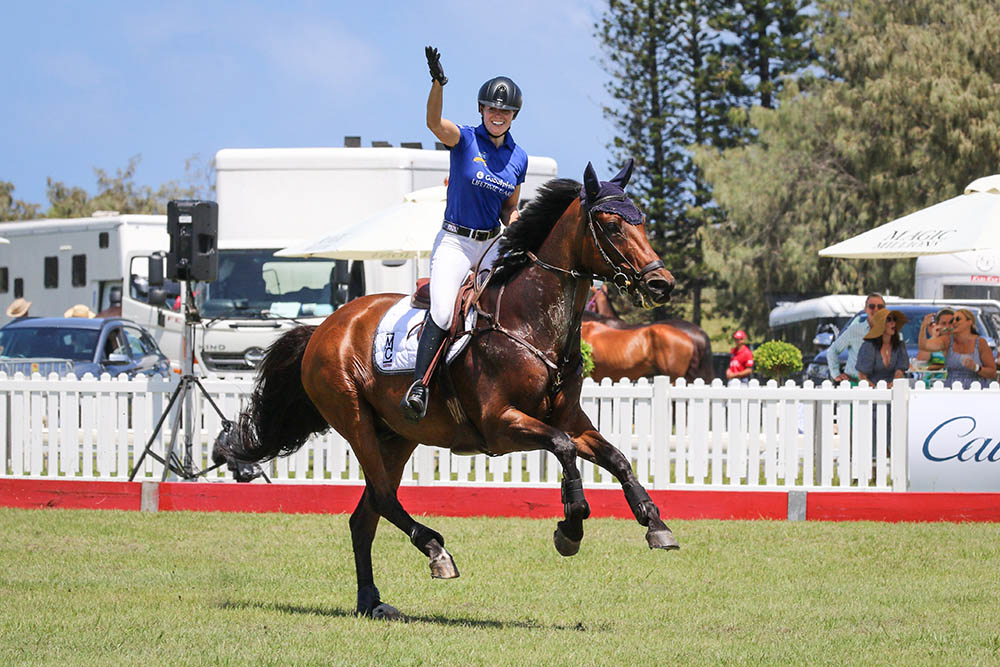 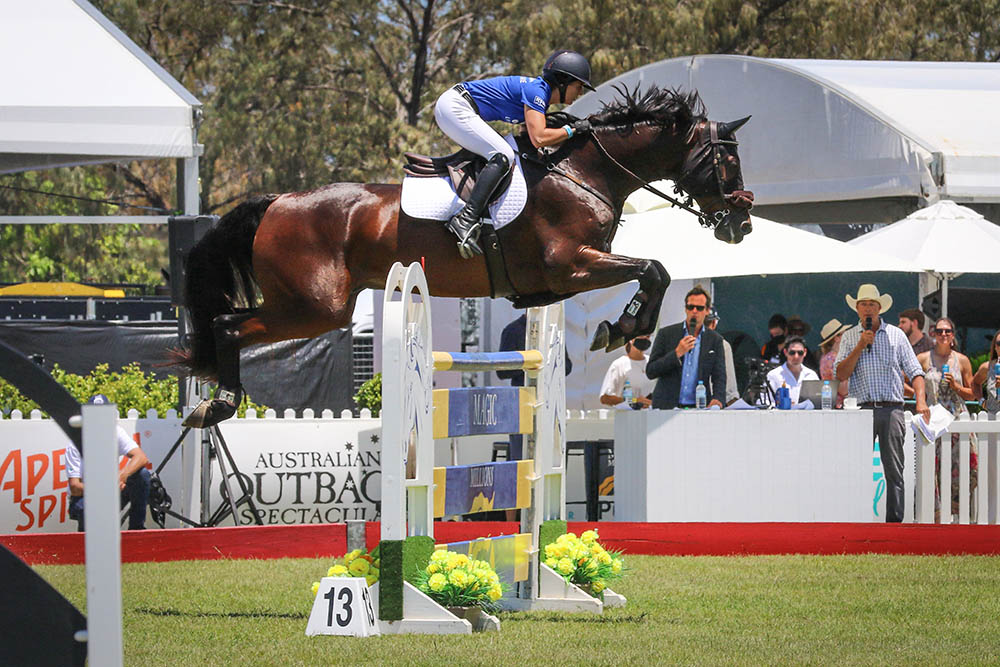 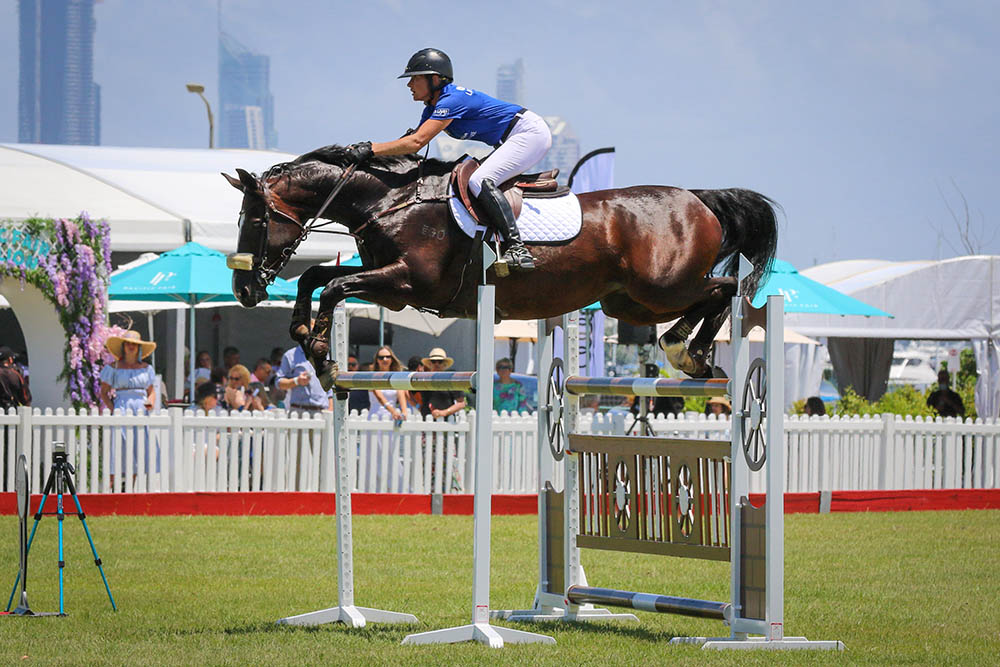 Victorian Jess Pateman aboard Celso came out as the final rider of the day for her team, with all the pressure on her needing to go clear. She pulled out a stunning performance, leaving every rail in place to seal the win; Jess celebrated with multiple victory laps to an appreciative crowd. Lovely to see and there definitely should be more riders like her openly enjoying their success!

Both Victorian riders who had travelled over 1,800km to get to the show produced clear rounds. Frida Lindgren did a remarkable job considering she had cracked ribs from a fall on Christmas Day! The Godolphin Lifetime Care winning team comprised Gabi Chugg (NSW) on PSS Levilensky, Emma Smith (NSW) on Cordelia Ego Z, Jess Pateman (Victoria) on Celso, and Frida Lindgren (Victoria) on Ashleigh City Lights; they took home the $34,000 first prize.

With a short break to pack away the show jumps, it was time for the much-anticipated polo celebrity match. This is always a highlight of the day and certainly provided plenty of laughs. Apparently this is for “fun” but it is taken very seriously. The teams this year featured Billy Slater and Jack Archibald for Pacific Fair, and successful trainer Ciaron Maher on team Star Gold Coast. Commentator, Hamish McLaughlin, who knows his way around a polo field, provided even more off-field laughs.

Another of the highlights of the day was the Stomping of the Divots, where spectators, VIPs, sportspeople, politicians and celebrities all join in — you never know who you might bump into on the field — and it is wonderful people watching. What a spectacle! Back to the polo; there was then the second half of the celebrity match, which was won by the Pacific Fair team, providing bragging rights until next year. 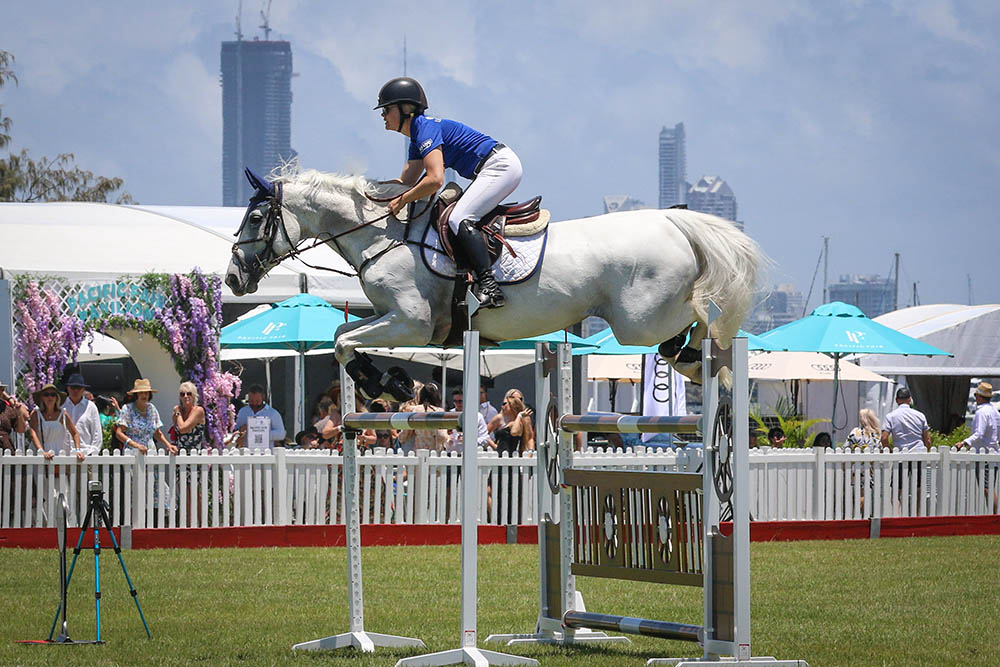 While all this was happening on the field, there was also the Fashions on the Field in the Pacific Fair Pavilion that attracted big entries, crowds and prizes. While we were cooling down with a cold drink, the serious polo players were tacking up and there was also more entertainment on the main arena provided by the talented stockmen and women from the Outback Spectacular. There was stunt riding, Roman riding and an exclusive show designed specifically for the 2022 Magic Millions Polo Day. 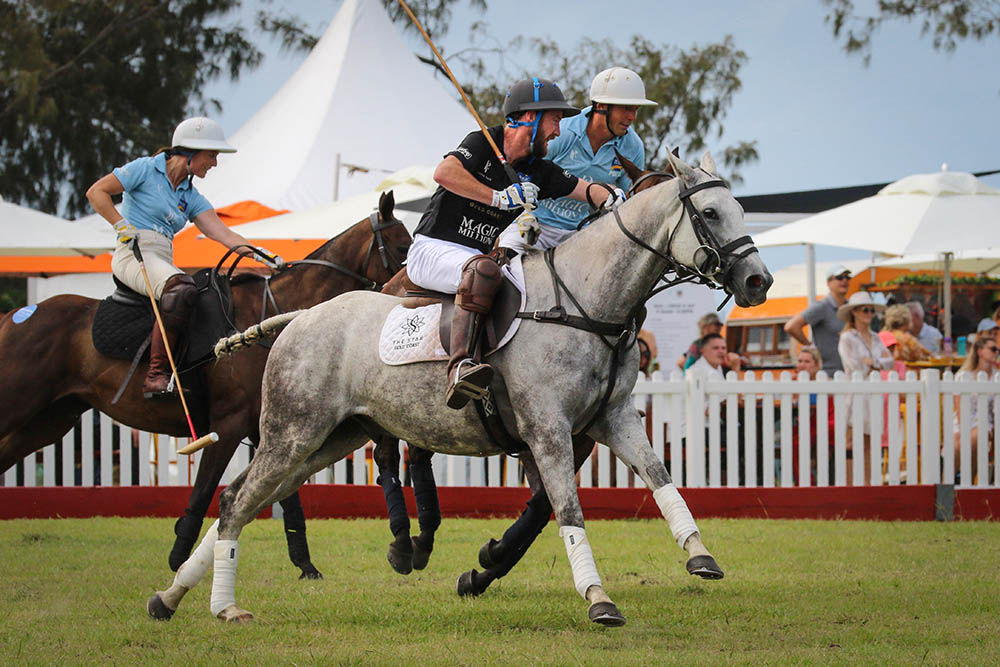 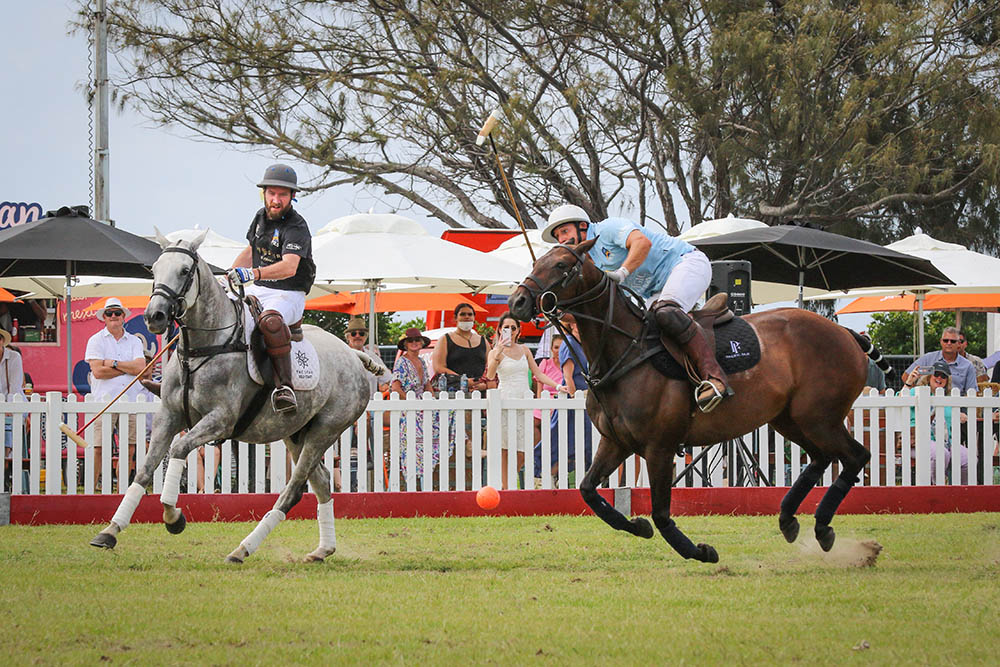 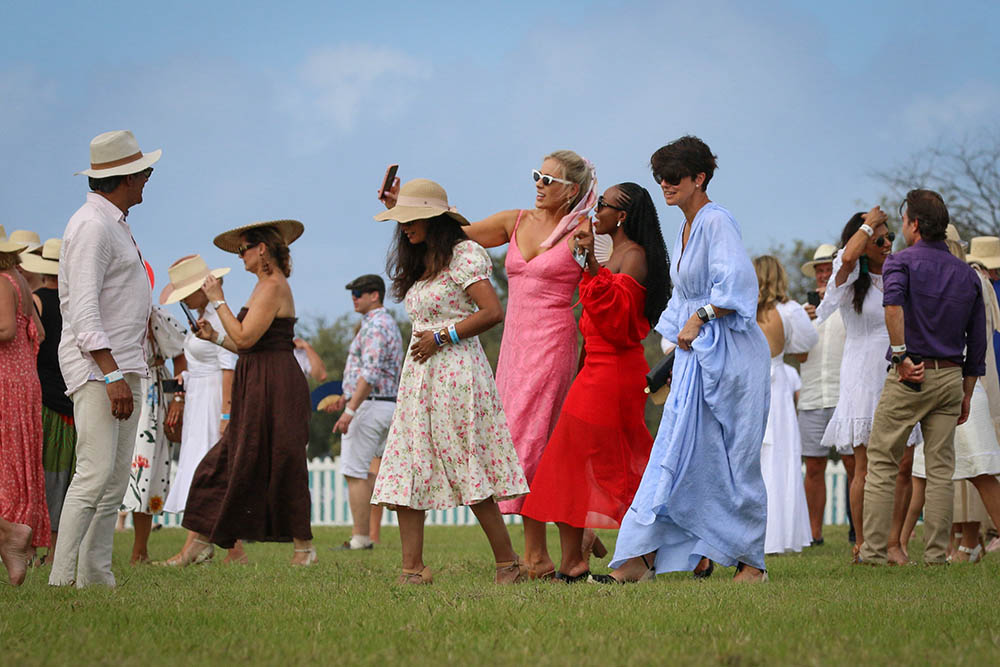 The stomping of the divots provided a great opportunity to mingle. © Michelle Terlato Photography 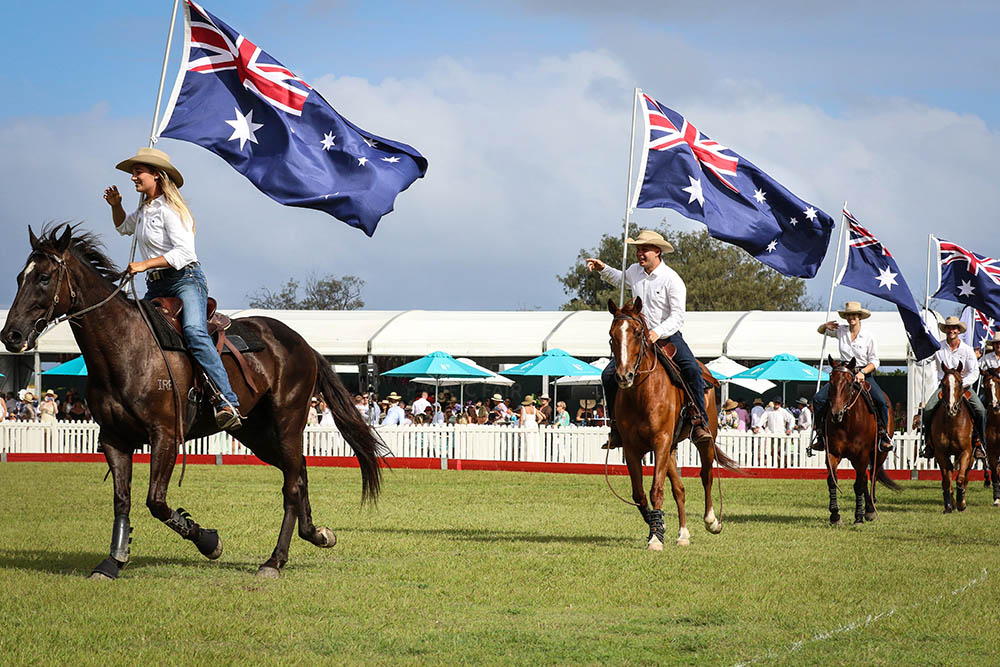 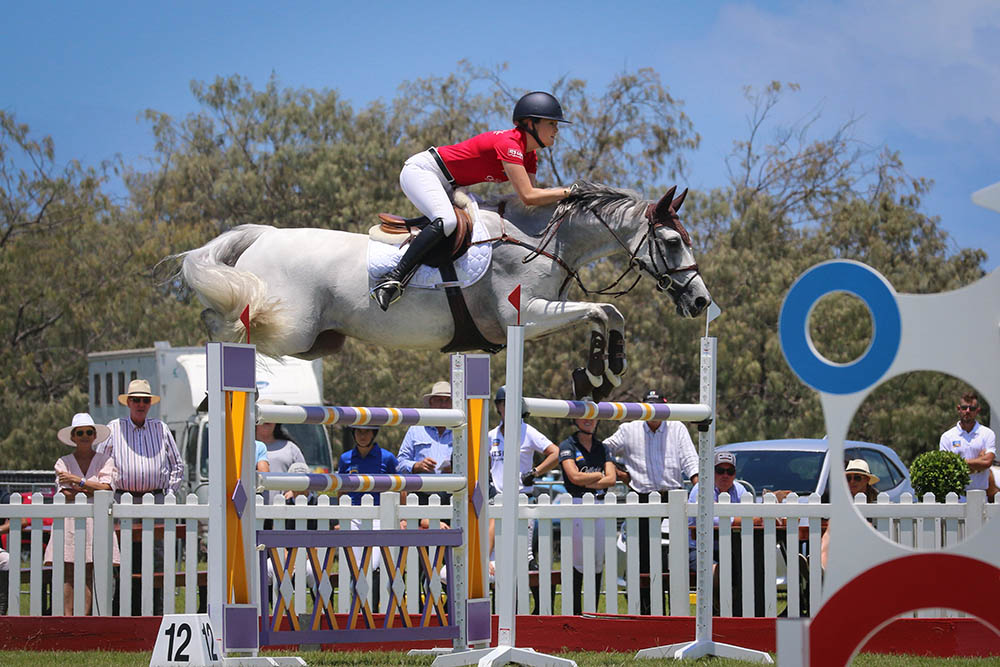 Young rider Amelia Douglass in action; at next year's event she could be competing for $1 million! © Michelle Terlato Photography.

As the stunning day drew to a close there was no doubt that the inaugural showjumping at the Magic Millions was a resounding success, well attended and thoroughly enjoyed by spectators and competitors. It was a fabulous venue with great atmosphere, exactly what the sport needs. If you are considering a visit to the Gold Coast in January next year, make sure you schedule this into your calendar.

Within a week of this event some very exciting and welcome news came out of the Magic Millions camp. Showjumping in Australia is about to take off with a $1 million event that will make it one of the most valuable stand-alone competitions in the world. The success of the 2022 Magic Millions Polo and Showjumping Day that offered a huge $100,000 in prizemoney has led to an even bigger event with a much bigger prize pool for next year.

“A million dollars has never been done in this country,” says Magic Millions co-owner Katie Page-Harvey. “We really want to bring our showjumpers through in Australia and the best way of doing it is to put money on the table.”

Katie’s husband and Magic Millions co-owner Gerry Harvey chimed in: “This will put showjumping through the roof. I love that. It’s the biggest thing that’s ever happened in showjumping in Australia.”

What a wonderful and exciting initiative from Katie, Gerry and Tom Magnier from Coolmore Australia. I am sure the Australian equestrian public could not agree more. EQ

You can find out more about the Magic Millions here.