Joy Charlton was born 18 December 1936 and died 14 January 2022. From very humble beginnings, Joy led a remarkable life and was a significant personality pioneering dressage in Australia from back paddock competitions to our international shows that we enjoy today. 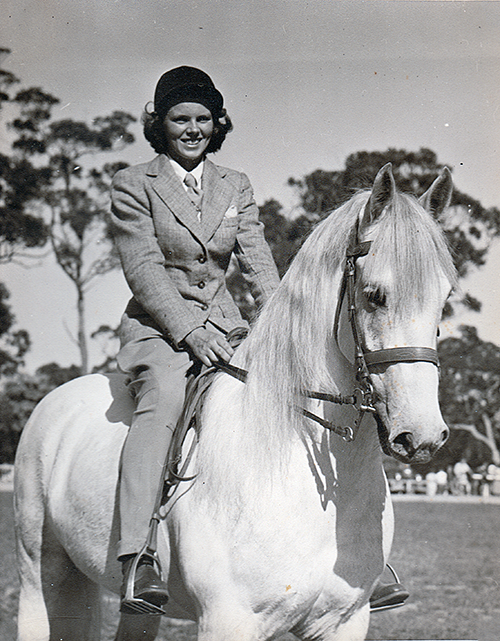 Right from a very early age, Joy had a passion for horses.
Click here to find out more about 4Cyte’s range. 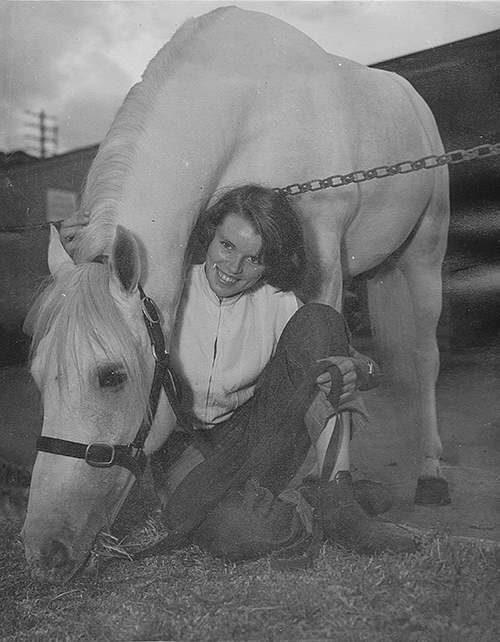 Joy would spend as much time as she could with her horse gowing up.

Joy was the second eldest of five siblings born in Leichardt to Mick and Mavis Garside of Rozelle. Right from a very early age, Joy’s passion for horses was overwhelming.

Joy started with a pony called ‘Jimmy’ who was purchased at the Homebush Saleyards. To get Jimmy home, a bridle was bought for 1 ½ pounds (also at the Saleyards) and Joy then rode Jimmy home bareback all the way from Homebush to Rozelle. For those of you that know Sydney, that means going through North Strathfield on into Drummoyne, then over the Paramatta River via the Iron Cove Bridge to Rozelle, which is basically Balmain. This would take a normal person walking over two hours. In those days you had to navigate cars and also trams along the way. Joy undertook this epic ride alone when she was just 10 years of age and she was a beginner! Oh my goodness! Talk about growing up with heightened instincts of staying alive and having to be responsible for the decisions you make. And that is at 10 years of age.

At 17 years of age, Joy left school to work at the bank of NSW in the city. Joy’s sister Carolyn recalls her rising at 5am to look after her horse and coming home very late after caring for him in the evenings.

Joy attended gymkhanas and shows on the weekends. She was able to ride to the events that were held locally. Her parents did not drive a car, so Joy and a group of her friends would book horse transport to take them to the agricultural shows that were further afield. A handsome young driver called Neville would be asked for to take the girls and their ponies to the shows. He loved to help them and even put Blac-It on the ponies’ feet. Joy caught Neville’s eye and the love story began. Joy and Neville were married in April 1958 and Joy became Joy Charlton, as we all knew her, and her maiden name of Garside slipped away into history.

On 1 August (horses’ birthday) 1959, a baby boy, Craig, was welcomed into the Charlton family. Unfortunately, Craig passed away September 1960. It was with much happiness that their baby girl, Kerry, was born in 1964.

Joy proceeded onto showing hacks at many Royal Shows across the eastern seaboard with great success. A mare, ‘Nannete’, who was close to Joy’s heart, went on to win the Crane Trophy in 1973, 1974 and 1975. The Crane Trophy is a prestigious award for Thoroughbred mares at Sydney Royal. In 1981 Joy was awarded Inaugural Champion Lady Rider over 40 at Sydney Royal. It is not so long ago that winning Champion Rider at Sydney Royal was perhaps the ultimate accolade that a top Australian rider could achieve. Other Australians who have won the prestigious class and gone on to represent Australia in Olympics or become leading Equestrian Australia administrators or become top of the range judges include but are not limited to:

However, Joy was not satisfied with just showing horses. Her words to describe showing were, “running around in circles and getting nowhere”. As a young girl, Joy had seen a film of the white stallions from the Spanish Riding School in Vienna. She longed to train a horse that way.

This became her passion for the love of dressage and the rest is history. Joy became a pioneer in the field of dressage. Her first horse to reach the heights of Grand Prix was a crazy ex-racehorse called ‘Nullegai’.

Many hours were spent educating him and schooling him with the help of her trainer, the late Franz Mairinger. Franz came to Australia after training in his early life at the Spanish Riding School in Vienna. 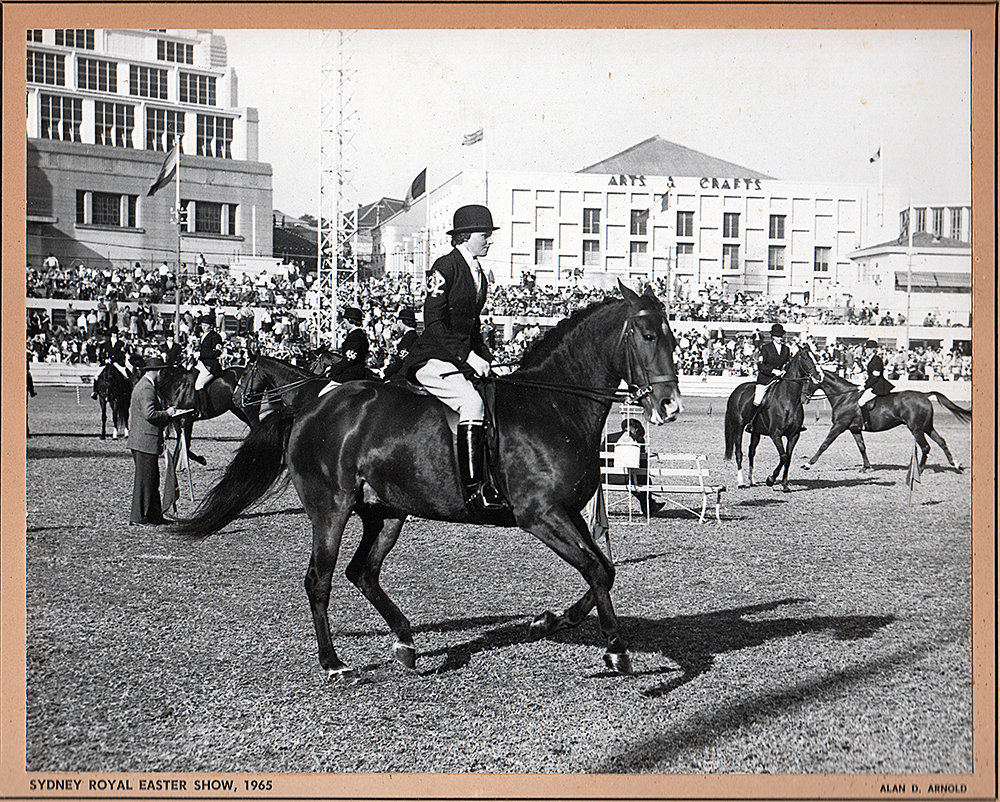 Joy, pictured here riding at Sydney Royal in 1965, began her equestrian career in the show ring. 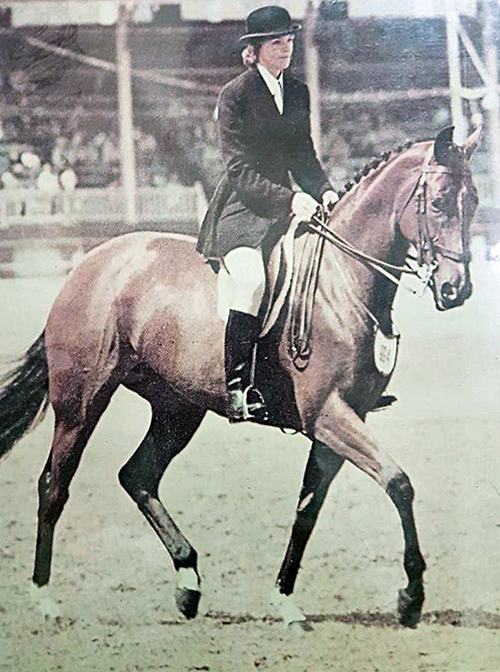 Joy competing with 'Nannete' at Sydney Royal in 1975. 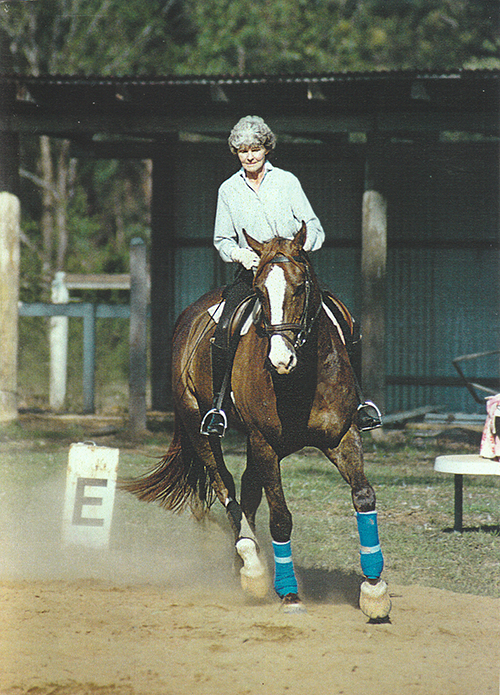 Joy's attention eventually shifted to dressage, and she became dedicated to the sport. 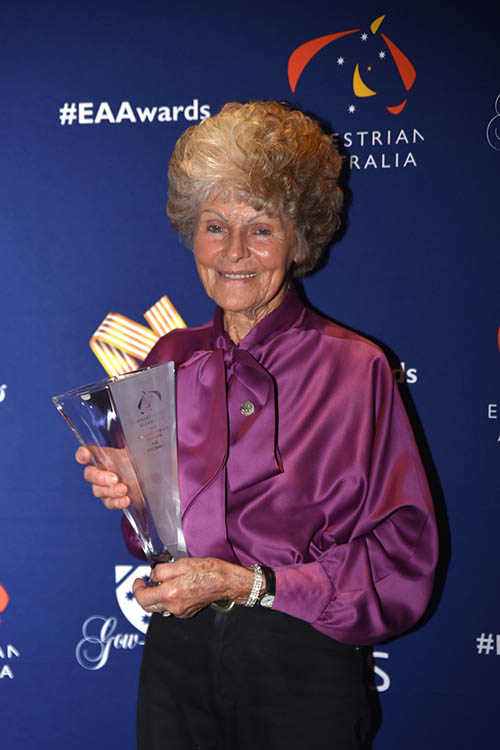 Joy was named 2015-16 Equestrian Australia Volunteer of the Year. 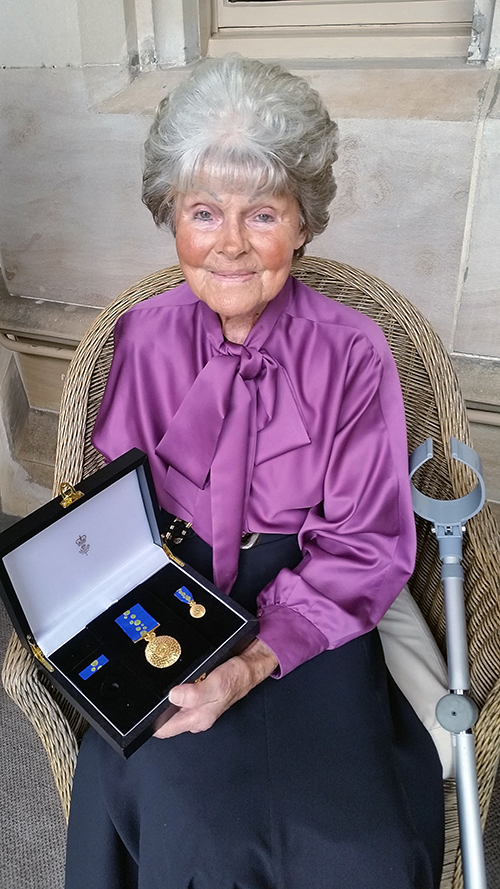 “Joy was relentless
and just never gave up.” 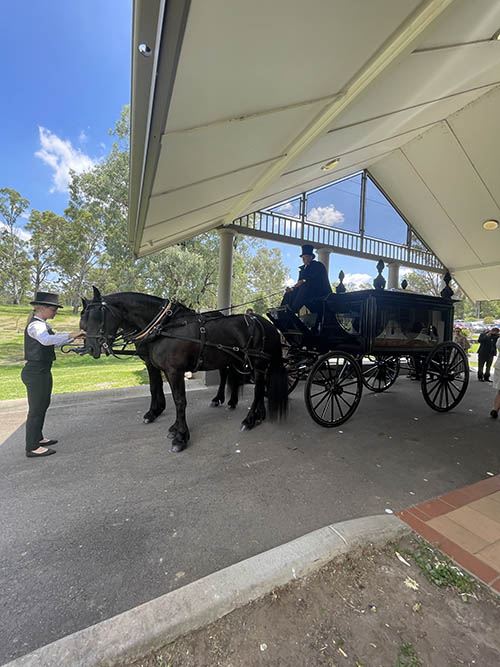 Nullegai and Joy were selected to compete at the Moscow Olympics in 1980, however the Australian team did not compete that year due to the boycott. After numerous Dressage Horse of the Year awards, Nullegai retired at the age of 21 years old. After the challenge of taming Nullegai, Joy went on to compete with many other horses with great success. In 1982, she achieved her dream to ride and train at the Spanish Riding School in Vienna. Joy then went on to become a coach to share her knowledge and the “gospel” of dressage to every Australian.

Joy decided that the next important step for Australia was judging. Joy attended many clinics in Europe to hone this craft. Once this mission was complete, Australia could have a uniform judging system meaning FEI events could be held. This idea of having a show just for FEI horses in Australia was unheard of, however, in 1984 the Lochinvar FEI competition was born. After a few years the competition outgrew Lochinvar and moved to Horseworld in Sydney and then moved to the Sydney International Equestrian Centre where it is today, called the Sydney CDI. The Sydney CDI is perhaps now the biggest international dressage competition in Australia and without question its beginnings and consequent development had a lot to do with Joy Charlton.

In 1991, Joy went on to be the first ever recipient of the Gow Gates Award, as the NSW Dressage Person of the Year.

Going back a bit, Joy in the 1970s took on the fight against the Sutherland Shire Council, which is where Joy lived (Gymea Bay); the council wanted to remove horses being kept in suburban backyards. Joy fought tooth and nail with the council for the residents of the area to keep their beloved horses at their homes, often on house blocks. Joy solicited the support of the RSPCA and for a while this was a very hostile situation. Joy was relentless and just never gave up. Eventually a resolution was reached, and would you believe it the council became her friend and in 1979 the council even went so far as to grant a park for the sole use of horse riding. Later, two purpose-built dressage arenas became the home of the club named “Southerland Shire Horse Owners Association”. This association commenced in 1980 and Joy was the president.

Joy remained president until six years ago. She was instrumental in organising events, encouraging everyone to compete including young riders, disabled riders and beginners. In 2001, Joy moved to her dream property in Theresa Park; having her own arena and acreage was a far cry from a Gymea Bay houseblock.

Resulting from her hard efforts, Joy was nominated and won Equestrian NSW’s volunteer of the year and then later went on to win the Equestrian Australia national award.

Joy’s crowning achievement was being awarded an Order of Australia Medal in 2020. It was an honour and she was so proud of this award. It was the pinnacle of her remarkable life.

Joy Charlton was one of those quiet Australian defiant warriors who was completely dedicated to the development of dressage in Australia. Joy was completely devoted to the sport herself and also completely devoted to encouraging other Australians to become involved and to become knowledgeable and to enjoy their horses for the beautiful animals that they are. All of us in the equestrian world here in Australia owe Joy so much. Joy has gone now, but has left just so much here in Australia for we horse riding enthusiasts to enjoy and develop with our horses in the future. Thank you Joy and we will remember you.

P.S. Most of this eulogy was put together by Joy and Neville’s baby girl, Kerry, who was born in 1964. Thank you Kerry.