There are dozens of famous equestrian families around the world, but it is fair to say that the Whitaker showjumping dynasty is possibly the largest and most successful. 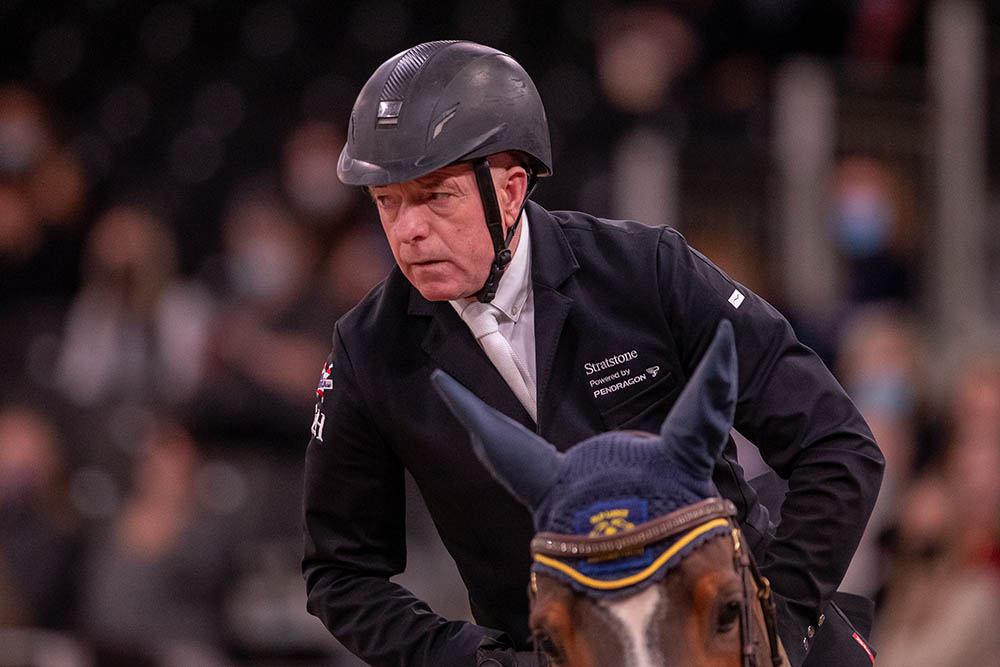 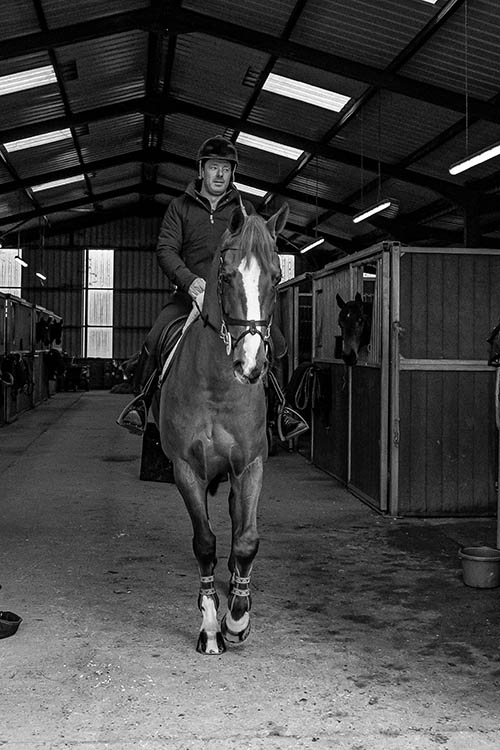 Currently there are three generations of Whitakers jumping in the UK and Europe — from tiny tots on ponies, to competing cousins, sibling rivals and even some married couples!

The eldest of the Whitakers needs little introduction, the evergreen John Whitaker MBE, Olympian, winner of countless championship medals and just about every major international class that you can name. At 66, he is still competing at the top level and shows no sign of slowing down or, heaven forbid, retiring! Born in Huddersfield, Yorkshire (320km north of London) he grew up on a farm with his parents and three bothers.

John first met his wife, Clare Barr, when they were teenagers and they married in 1979. The couple have three children, and all three have followed in their father’s footsteps — Robert, Joanne and Louise.

I recently had a fascinating afternoon talking to Robert, who earlier in his career had great success on European Pony, Junior and Young Rider teams, collecting six team golds and one individual bronze medal. He then transitioned seamlessly onto horses, representing Great Britain on numerous senior teams since his teens.

Robert was initially based at his parents’ yard in Yorkshire, until he met fellow showjumper Kate Jackaman and moved into Kate’s yard at the home of her parents. Robert and Kate married, and they set up a yard near Gatwick, Sussex, south of London. It is ideally situated for travel to Europe as well as having several show venues quite close by — including the All England Jumping Course at Hickstead. Robert and Kate have two young daughters, aged five and eight, both of whom are showing great promise in the saddle.

As I chat to Robert in the kitchen of his welcoming family home, I ask him how it feels to be the son of arguably the best showjumping rider in the world. “When I was younger,” he says, “I was aware of how good Dad was, especially in the Milton era as they had so many fans. I always knew he was popular and famous, but it was just normal life for me. When I was on ponies, I travelled to quite a lot of shows with him and sometimes took my own 14.2 (148cm) to compete.” I ask Robert if he ever rode Milton: “Yes, I did sit on him in. I can’t remember if I ever jumped him, but I was only eight or nine when he was at the peak of his career.

“Mum played a huge role in my development as Dad was away so much,” Robert continues. “She is still really involved with the pony scene to this day; she is very successful at picking the teams. Mum always chose my ponies, so with Dad’s help and Mum’s knowledge we bought younger ponies and produced them ourselves.

“I think that it is important to ride as many different horses as possible, as you must be versatile in your riding. Most riders must adapt their style to each horse that they ride. That’s why my dad is so good, he can adapt to any individual horse in a very short time. I still find it hard to grasp how it can sometimes go wrong for him one day and then he will come out the next day, put things right and not think about the day before. He never over-thinks anything. I have to be more focused, try hard and believe that I can do it.”

I ask Robert what he would do if he wasn’t a showjumper: “I really don’t have any idea as I don’t know anything else! I don’t have much time for hobbies either. When you have horses, it is 24/7. I do enjoy watching National Hunt racing and I follow football. I am a Manchester United fan.” 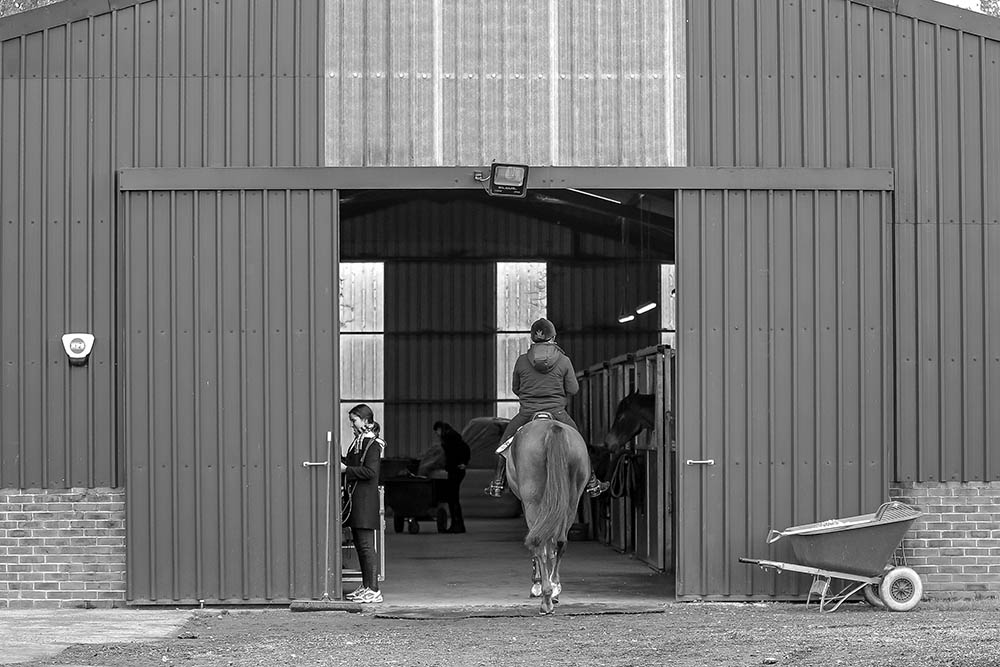 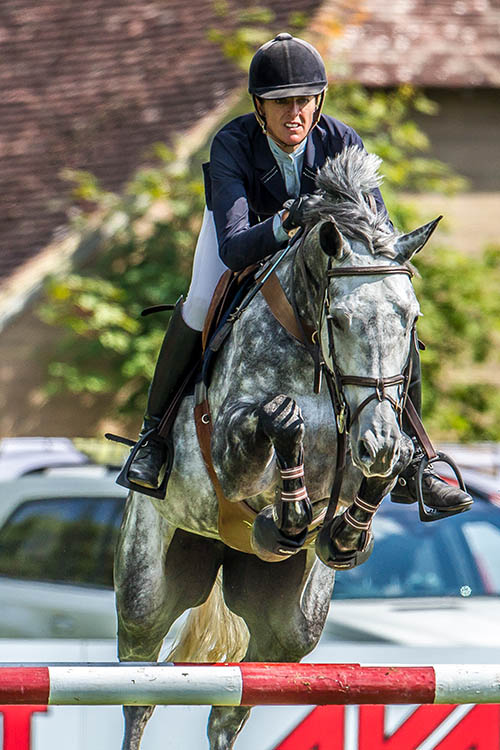 Robert explains that he and Kate work closely together. “Kate manages the yard, looks after the students and works the young horses. She keeps everything ticking over while I’m away at shows; it’s great, as I don’t have to worry about what’s going on at home and can concentrate on my job.

“Kate does not get enough recognition; she does all the work that I don’t have time for, and when Kate wins I am so proud of her. When I am at home I do as much teaching as possible and help with the students; we currently have four training here.”

Robert and Kate have about 20 horses in work, although some of these belong to students. Robert has just retired his top Grand Prix horse, the 18-year-old Catwalk IV, but has a couple of good eight-year-olds and a five-year-old that he is excited about. I watch Robert ride one of his promising youngsters, I’m Special Too DHH, when I visit the yard: “Catwalk is probably the best horse I’ve ridden,” he says. “I have had a few others that I’ve won a lot with too, but I have done so much with him in the 10 years that I have had him, including wins in 5* Grand Prix and being on Nations Cup teams.

“People think I am naturally talented like my father, but I’m not! I could always see a good stride, but my flatwork wasn’t great, and I really had to work hard at it. Dressage rider Richard Davison helped me a lot when I was younger. I still have help with my flatwork and now have lessons with Portuguese dressage rider Luis Principe. If you have a horse that jumps well, there are always methods to improve them, and I feel flatwork is so important. Some horses are naturally well balanced and others need more work to reach the same level.”

Although living at opposite ends of the country, John and Robert see plenty of each other as they are very often competing at the same shows. I caught up with both John and Robert at the London International Horse Show in December 2021. John was competing, and for the first time in the last few years, Robert was there as a spectator.

While at London International, Robert explains that he has learned so much just from watching his father ride, being around the stables and going to shows with him. John tells me: “When he was a child, I helped Robert, but not in a ‘sit up and put your heels down’ sort of way. Robert and I always discuss things. We help each other, even though we are competing against each other. Yesterday in the World Cup, Robert helped me, he was watching the other riders’ rounds and telling me what I should be doing.” 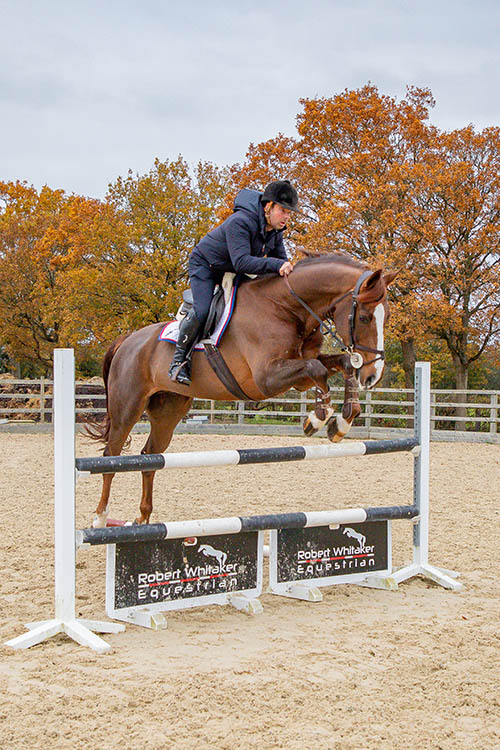 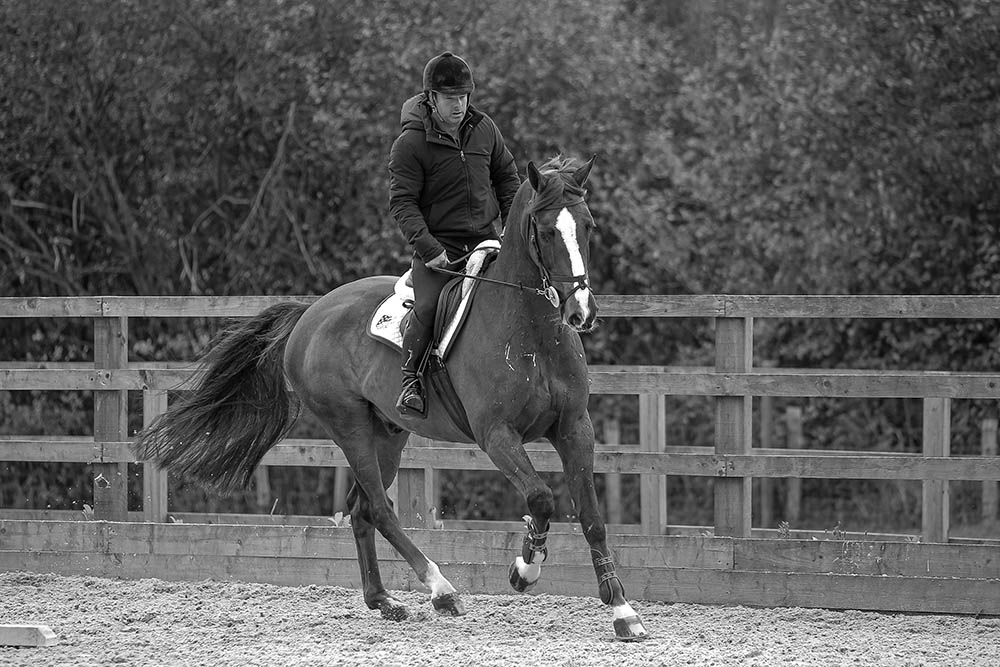 Robert says he has to work hard at his flatwork. © Elli Birch/Boots & Hooves Photography. 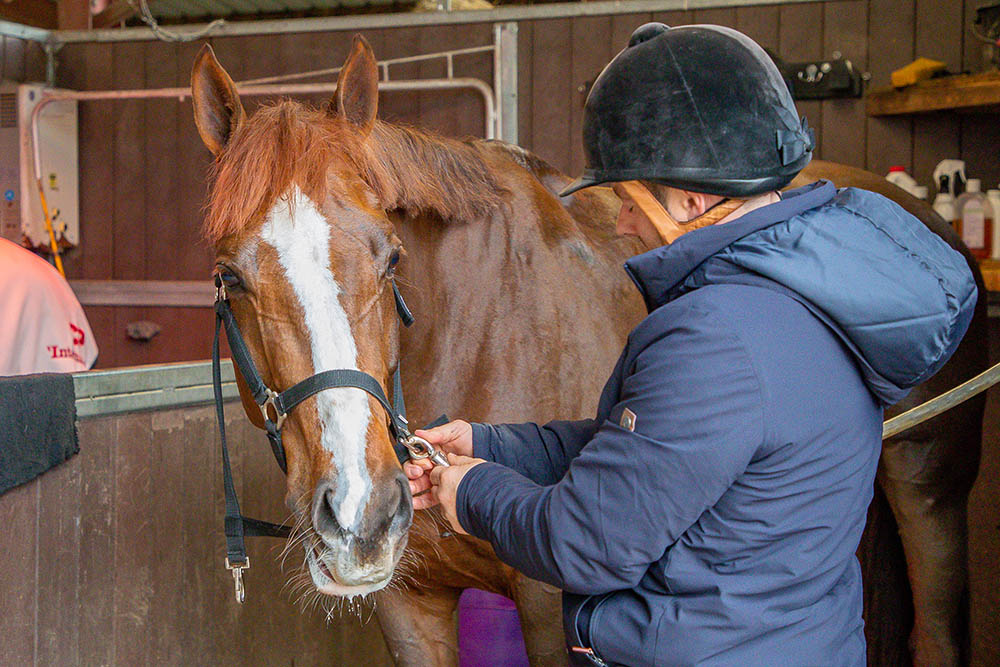 Robert and Kate have around 20 horses in work at home. © Elli Birch/Boots & Hooves Photography. 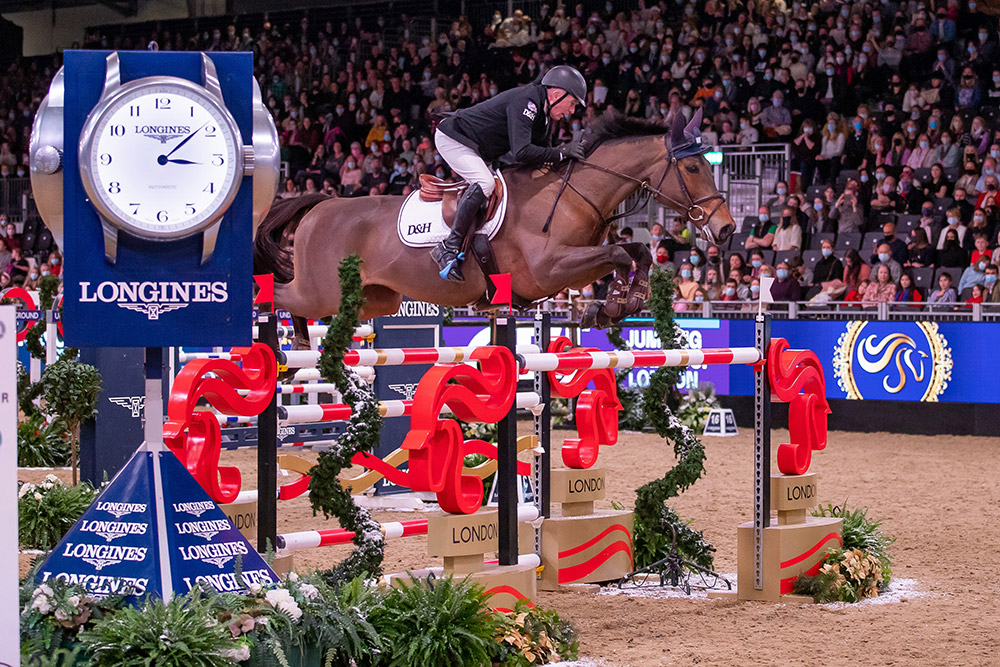 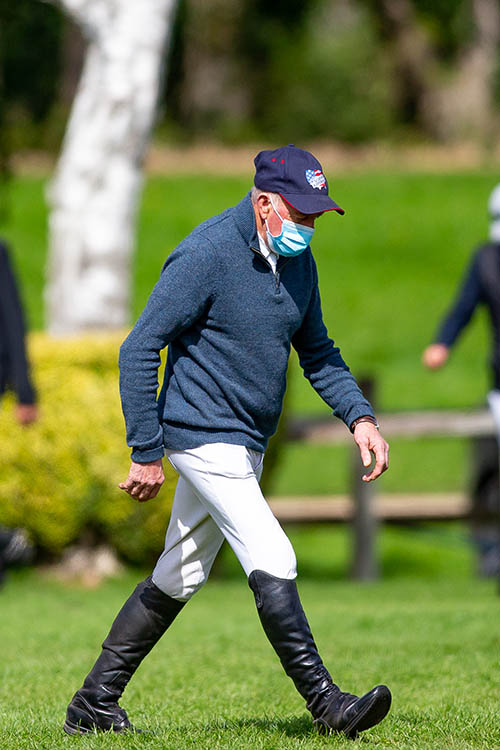 John Whitaker walks the course for the All England 1.40m Grand Prix at The All England Jumping Course, Hickstead. © Elli Birch/Boots & Hooves Photography. 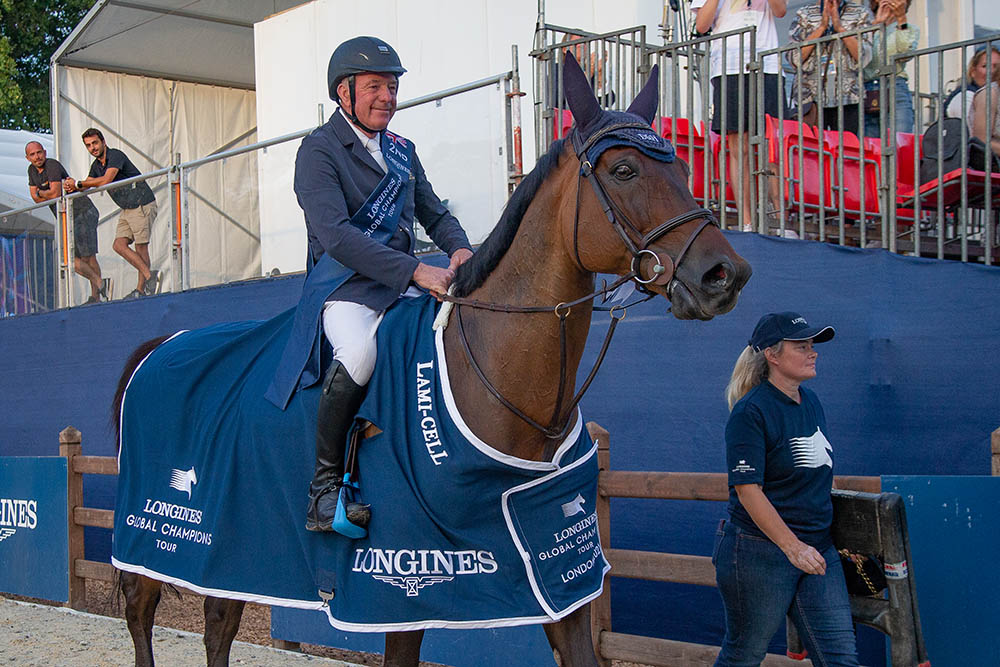 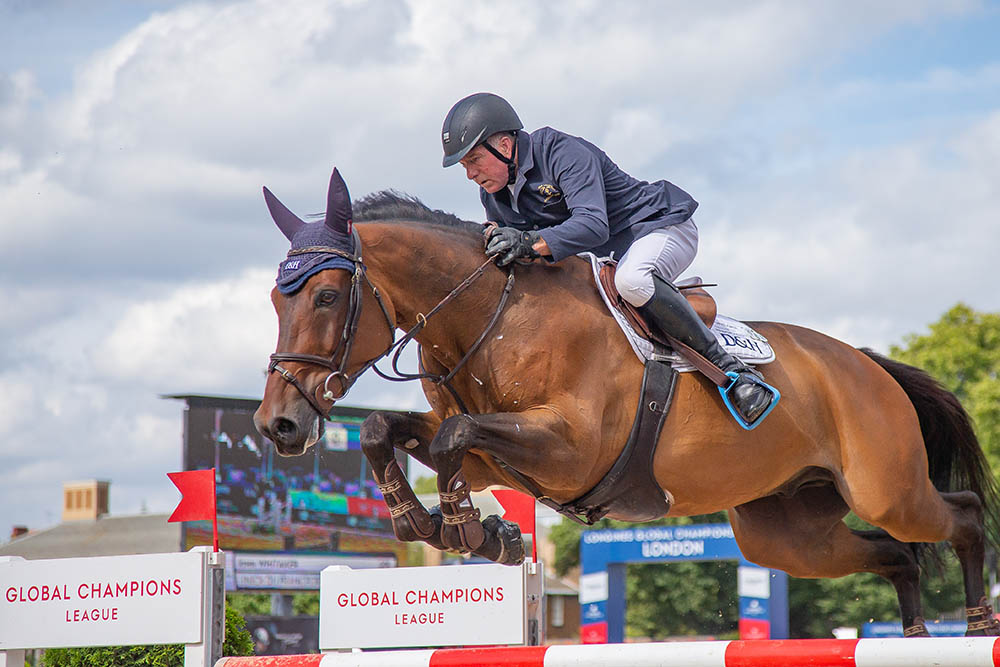 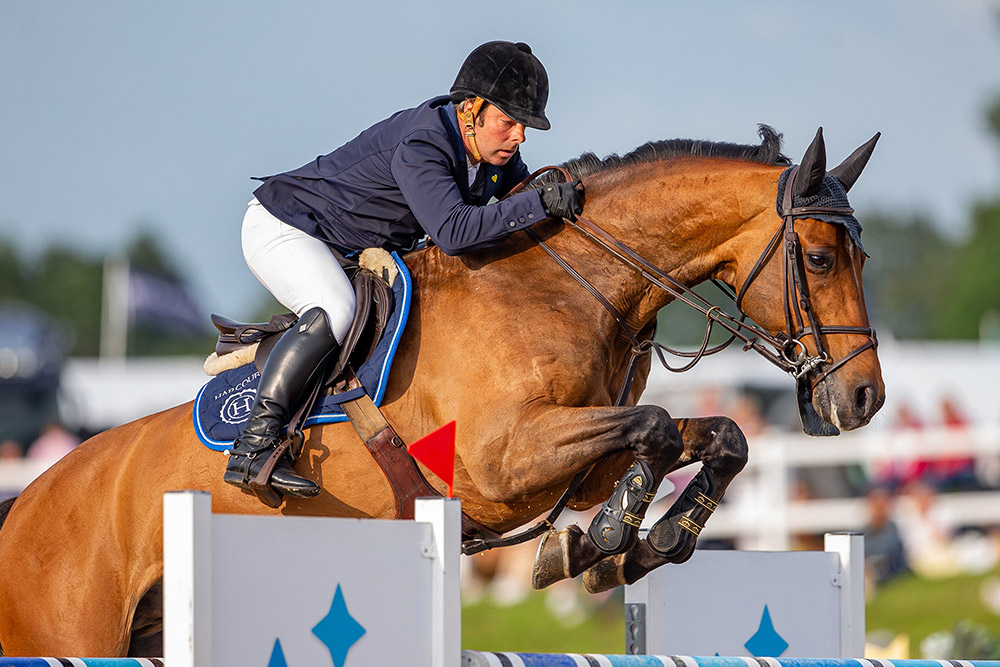 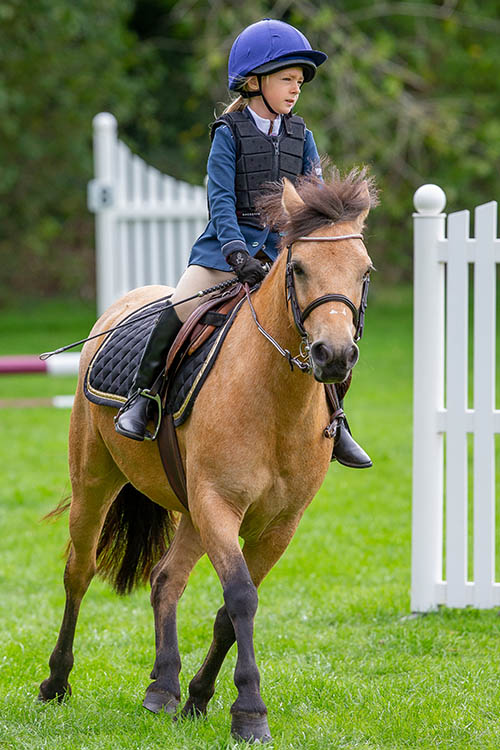 The next generation! Evie Whitaker competes in the Hickstead Mini Challenge at The All England Jumping Course, Hickstead. © Elli Birch/Boots & Hooves Photography.

Do they walk the course together when in the same class? “No, not really,” says John. “We don’t walk together but we will discuss it. Robert knows what he’s doing and sometimes I am a bit lackadaisical about walking the course, I just skip round and watch a couple go!” Robert adds: “If you are in a jump-off and the time is tight, you’ve got to do the right distances and we will help each other with where we think we can save a bit of time. As a family, we all help each other; we are just one big team.”

Asked if they had ever been on a team together, Robert says, “We were on the winning Nations Cup team in Rome in 2015 with Michael (John’s brother) and Holly Smith. At the Nations Cup in Drammen in 2001, myself, Dad, Michael and my sister Louise made up the team. To have all four members from one family was a first for our sport. John quips: “The Whitakers could field three senior teams for Great Britain at the moment, if we all had good horses!”

It is difficult to imagine John ever retiring from competition. He tells me: “To be honest, I don’t know when I’ll retire, I can see me doing it for another three, four or even five years. I’m feeling good and I feel I am riding good too. My body’s all right, I may look a bit old walking around but when I am on a horse I feel the same as always. I think my body is programmed to ride horses!”

You can find out more about Robert Whitaker Equestrian here.