In 2018, we reported on top event horse Algebra’s retirement party. Four years later, we catch up with owner Julia McLean to find out just how the pocket rocket is settling into life at a slower pace. 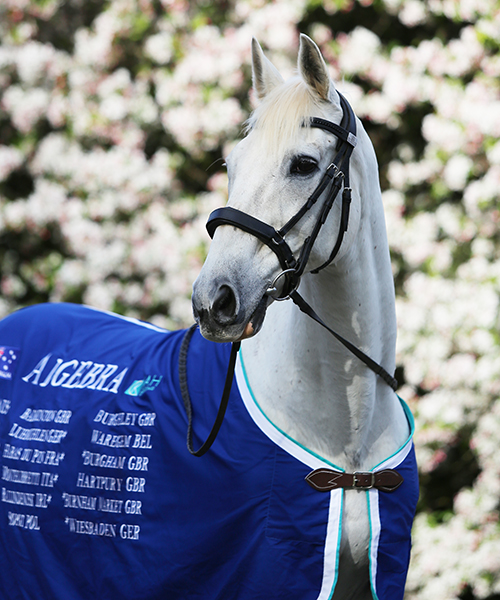 Algebra, pictured here at the time of his retirement age 20. Image supplied by Julia McLean.
Click here to find out more about KER’s Digestive Health

Bought off the track by Julia McLean for $1500, Algebra was initially scouted as a show hunter prospect. The 15.2 hand Thoroughbred by Azaam out of Sand Dollar initially went to Lizzie McRoberts as a Pony Club mount; 12 months later, the pair were at one-star level eventing. The little horse could really jump.

With growing university commitments, Lizzie returned him to Julia and co-owner John Glenn, who then sent him to Natalie Blundell to school and sell. He was never sold. Natalie and Algebra completed an incredible 27 CCI/CIC3* and six CCI4* events (which in today’s system equates to CCI4*L/CCI4*S and CCI5*L), and were among the top eight combinations nominated for the 2014 World Equestrian Games.

Natalie and Algebra arrived at Andrew Hoy’s stables on their European tour that year, with the plan being to sell the horse to a talented young rider as a schoolmaster at the end of the season – at this point, he was 16 years of age. Not finding a suitable rider or offer, John and Julia left the horse with Andrew to continue competing for Australia at the highest level. Together, the pair enjoyed great success over the next few years, winning two major CCI3* (now CCI4*L) events during the 2015 season.

Fast forward to 2018, and Algebra finally hung up his horseshoes at age 20 – happy and completely sound. Fittingly, the horse returned to Australia to live out his retirement at John and Julia’s beautiful farm in New South Wales. On his return, he took part in the Melbourne Cup parade through the city as an Off The Track ambassador and was given a retirement party at home with more than 125 people attending.

WHERE IS HE NOW?

Algebra, now 24, is still very much enjoying retirement with Julia and John and has gradually transitioned from life in the fast lane to a slightly slower pace. “He used to come in for dinner at 695 metres a minute but nowadays is more leisurely,” laughs Julia. “He prefers not to be led in; he knows where he’s going but likes to check some other things out on the way – other horses, the garden, big trots up the laneway and back. There are two trees perfectly evenly spaced in front of the gate to his night box – he likes to circle so that the entry is straight.”

Julia explains that the gelding is a complete gentleman, but he likes to do things his way. “I think when he left the quarantine station (after he returned from the UK in 2018) the staff may have had a wee tear in their eyes because in their words he was ‘such a dude’. He gets to spend time nowadays with young horses – he’s not rough with them but they find out their place in the world.” 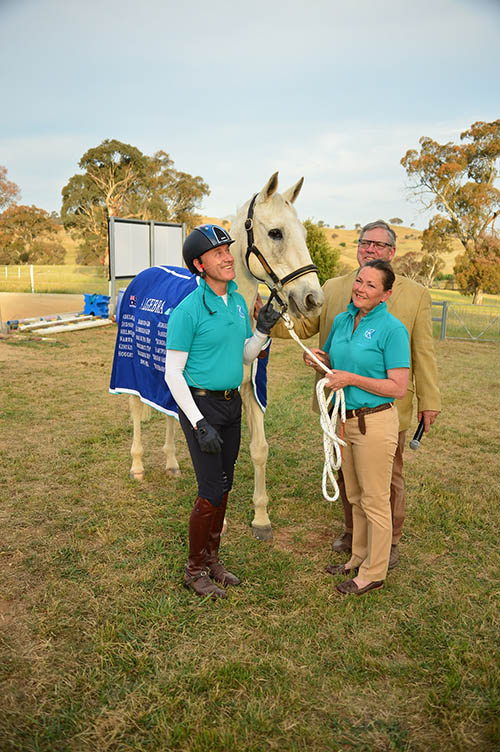 From an owner’s perspective, Julia explains just what it was that made this horse so special to her and those who rode him during his competition career. “Aside from being the best surprise ever – purchased off the track for $1500, destined for the show ring, and then going on to achieve so very much – I think Andrew Hoy would put his success down to heart. At Algebra’s retirement party, Andrew commented that he was not actually a horse he would have chosen for himself, but his heart and courage carried him through and endeared him to many.

“In my opinion as the owner, he caught the imagination of so many; people I didn’t know confessed to avidly following him. The little guy that could, I guess. At 15.2 hands, full of vitality and bright white in colour (assuming a very recent bath), people fell in love with The Pocket Rocket. He made us so very proud. He still provokes great emotion when I think about him.

“He retired completely sound at 20 years old and could have kept going, but he’d done it all, so it didn’t seem necessary and he had certainly earnt his retirement. I’m often asked why I think he retired so sound – his vet only used to see him once a year for annual shots, etc. For a start, he was broken at three rather than two to give him time to mature. I bought him at that age and he then had another year or so with light hacking before he commenced life as a performance horse at five. By six years he was competing at one-star and proceeded up a level each year after that. 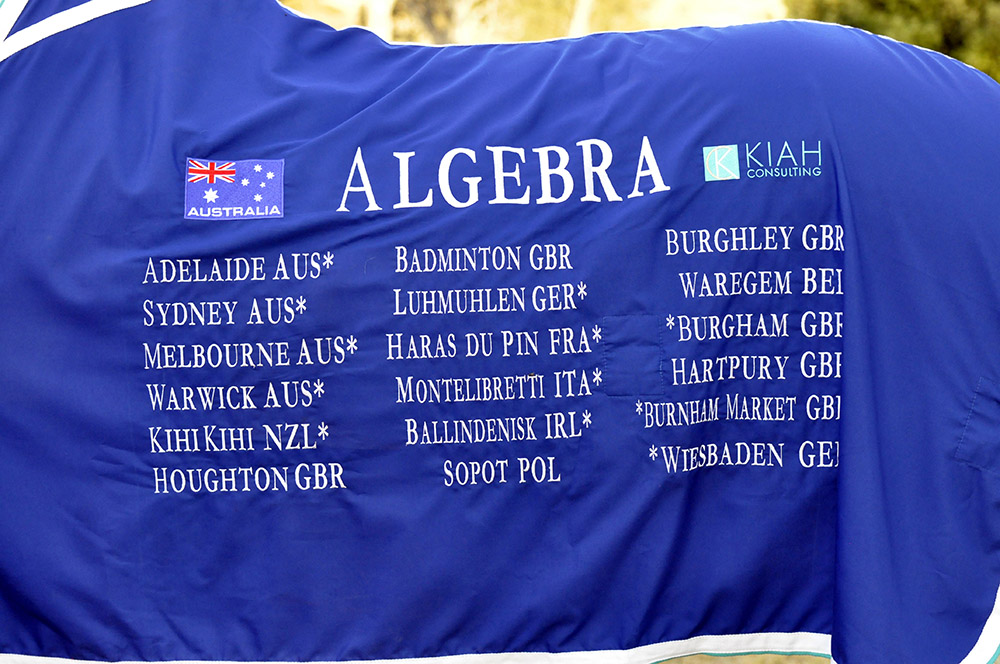 Algebra had an impressive career. Image supplied by Julia McLean. 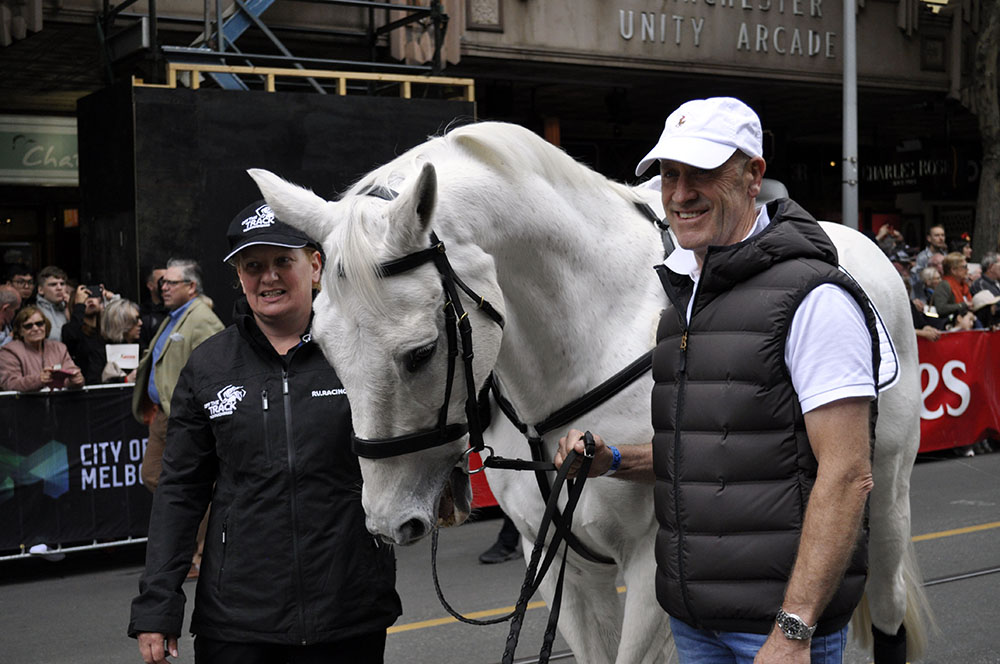 Algebra during the Melbourne Cup parade for Off The Track. Image supplied by Julia McLean. 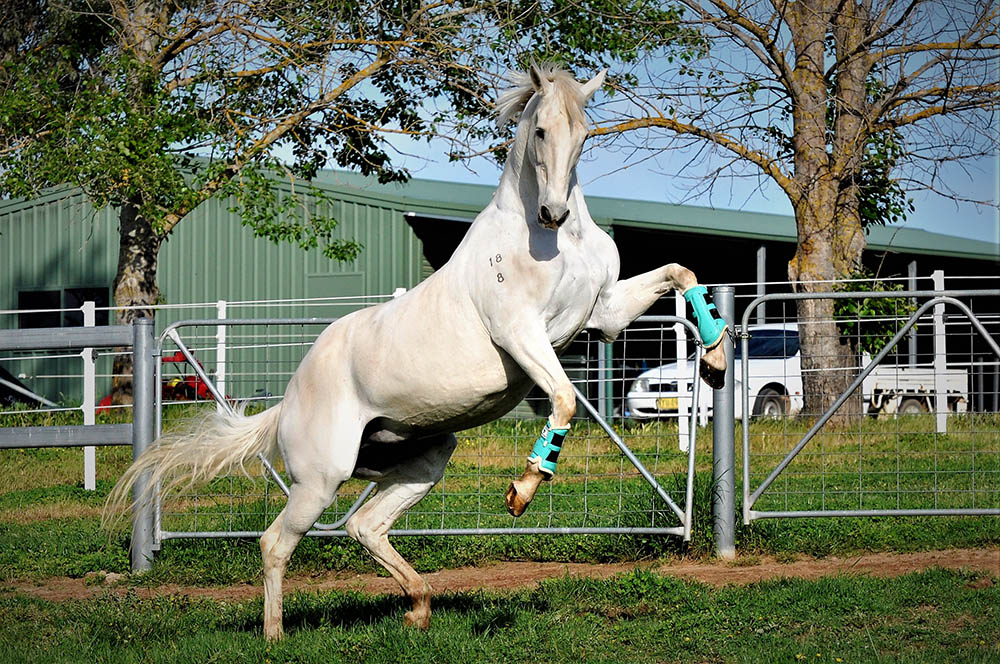 Algebra is now 24 and although retired, is showing no signs of slowing down! Image supplied by Julia McLean. 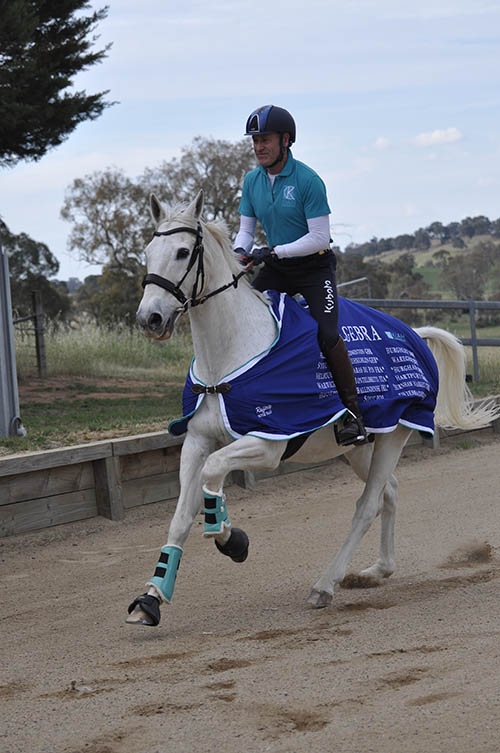 “That clearly contributed to his longevity, but I actually put a lot of it down to his conformation. He’s compact and balanced; some would say fairly upright in all his angles, goose-rumped, and I think all of that contributed to less stress on tendons and loins and everything else. Being a Thoroughbred from staying stock (Azaam) he had great ability to become very fit and recover after cross-country. That also had something to do with his temperament – while ‘hot’ under saddle, once he crossed the finish line after cross-country he knew the job was done and he would look forward to a relaxing bath and a massage, and a bit of a feed. His heart rate would drop rapidly and after the vet check he would be back to the stables while others might still be worked up and fidgeting.”

With the horse retiring so sound and looking amazing, Julia was tempted to ride him on his return – but she soon released he had his quirks, as all top horses do. “I found out very quickly I could not sit his trot – I had thought I might do some Medium level dressage (on a five-star horse) but it’s a skill to sit that trot – absolute respect for Natalie and Andrew! He is also a bit of a tyrant to hack out… he’s happy to go out but the minute you turn for home he’s off. He did that on the track – go out, work and then want to rush home.”

That being said, Julia hasn’t given up on the idea completely: “I was looking at him just the other day, thinking he was in as good condition and as good looking – better of course, but I’m biased – than any of the Thoroughbreds at Canberra Royal last month. It’s very tempting to get him out again…” EQ