Jayden Brown and the Willinga Park team are taking the big plunge and heading to the UK for a European campaign ahead of the 2024 Olympics. 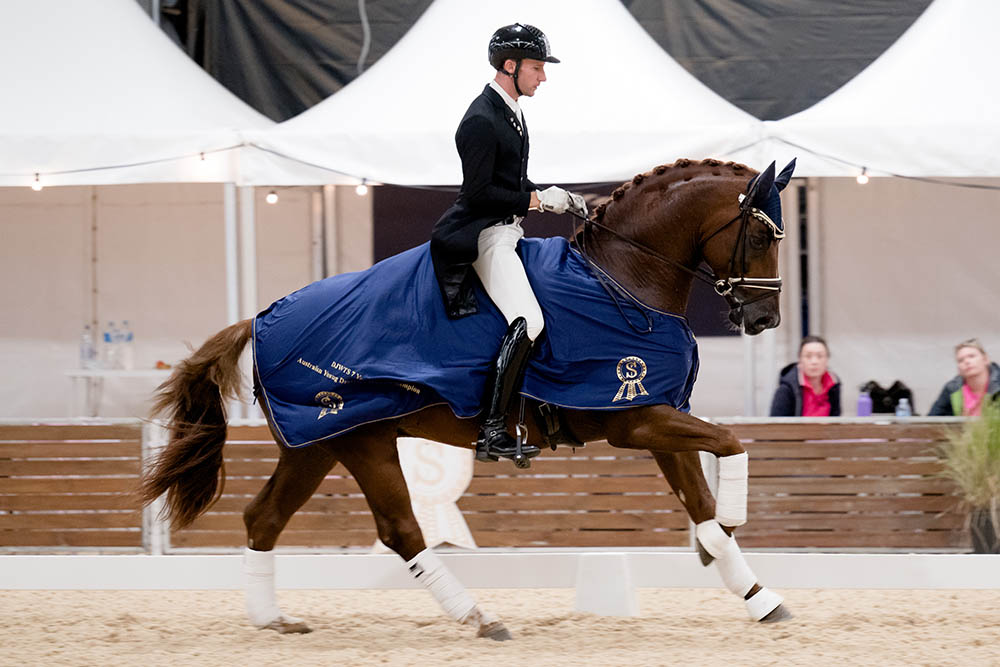 “I’m definitely glad this one
can’t be taken back!”

WillingaPark Sky Diamond, a previous Prix St Georges Cup winner himself in 2019, was this year runner-up in both the CDI-W Short Grand Prix and Freestyle to Mary Hanna and Syriana, with Jayden in the saddle. It was the first time the Short Grand Prix test has been used in Australia, and as such it was the first time Jayden had ridden it in competition. “I can’t say I’m in a huge rush to go and do it again!” he laughs. “[Sky Diamond] is definitely the sort of horse that needs a bit of a run up for everything, so it probably wasn’t the kind of test that particularly suits him. He likes the short element, but he doesn’t like all the movements coming at him quite so quickly. The normal Grand Prix is probably a bit easier for him at this stage, so we’ll probably keep focusing on that and see what we can do.”

Sky Diamond is a little notorious for having wild tempi changes – as they were at Willinga Park’s Dressage by the Sea in February – however, he reined them in a little at Werribee, averaging a 7.4 among the judges for the two-tempi changes and 6.3 for the one-tempi changes. Considering the Short Grand Prix test asks for the ones on the centreline between the pirouettes, it was a solid effort from the Sir Donnerhall gelding. “[The one-tempi changes] are a bit wild, but they’re getting there; as long as we’ve got enough speed on our side, we can get through them. It’s definitely a challenge for him in the Short Grand Prix, as it’s probably a bit easier to hide a few things on the diagonal, but hopefully by Sydney CDI we’ve got them well and truly locked in and then we will be set.”

Their pair’s score of 68.684% was an FEI World Championship MER, and with international judges present and no need for a Judges Supervisory Panel (JSP) like at Dressage by the Sea, the score will stick. “I’m definitely glad this one can’t be taken back!” he laughs, referring to their 69.674% score in the Grand Prix at Willinga Park that was ultimately rejected by the JSP despite being 3% clear of the 66% minimum MER requirement. Their score of 74.540% in the Freestyle at DJWTS was also pleasing, and an improvement from their 70.370% at Willinga Park: “He was really good in the Freestyle, so that was nice. We’ll keep trying to pip Mary [Hanna] at some point, but for now we’ll just settle for inching closer!” 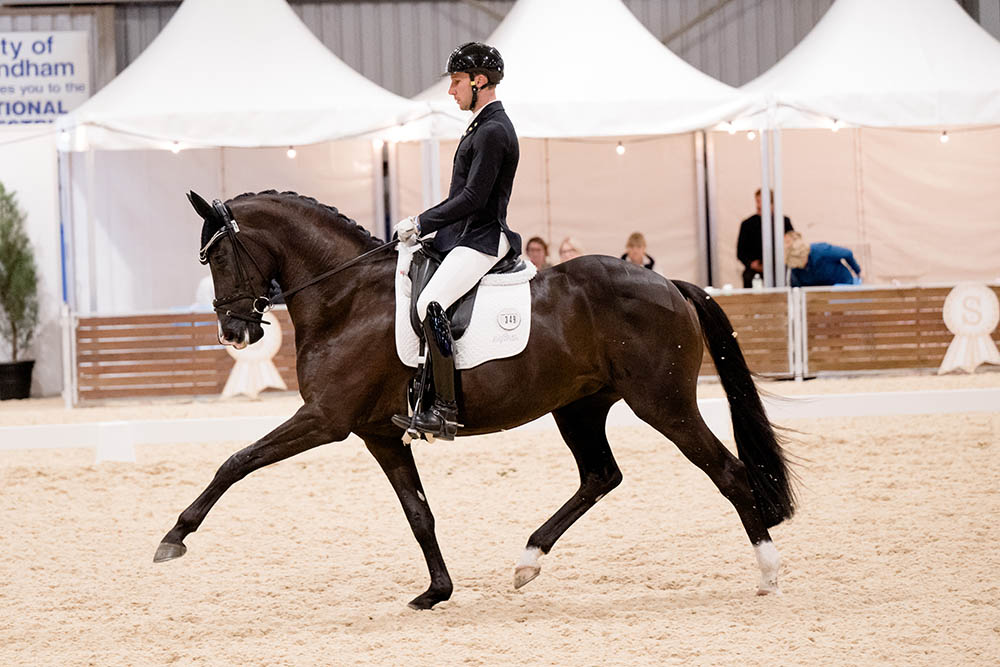 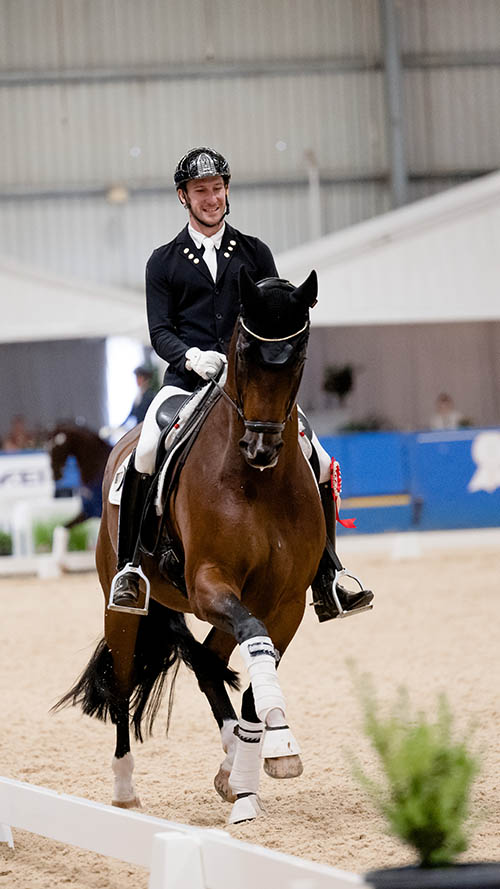 “We thought if we’re going to do it,
we should do it properly.”

With his team proving so successful here in Australia, it’s now time for Jayden to test them against the best in the world. It has recently been confirmed that the 33-year-old will be heading overseas with a team of horses in the coming months to train: “We’re planning for it to be about two years. Basically, we thought if we’re going to do it, we should do it properly.”

Terry Snow’s name is synonymous with Willinga Park. His contribution over the past few years to the Olympic sport has been without doubt passionate and outstanding. Terry has produced a facility that is unselfish in allowing international quality to be accessible to all Australian riders at all levels, and his ambition to see Australia on the podium an Olympic Games, especially in dressage, has been relentless. His endearing attitude towards seeing success in Australian riders often sees him take a back seat; he has a humble yet seriously positive attitude, often deflecting any praise for himself onto those who he employs. Words cannot explain what his input has meant and created in the development of the sport. From not only facilities, but heartfelt help towards safety issues such as in eventing, to buying international horses and promoting, inspiring and encouraging riders to seek the best.

The flow on affect of his input into the sport is obvious. It is no wonder that Willinga Park is becoming a facility and name known worldwide. Jayden Brown now has the opportunity through Terry and wife Ginette – who is an enthusiast and inspiration herself – to take this team of horses to train amongst the best. Terry and Team Willinga do not do things by halves; they never have and they never will.

Joining Jayden overseas will be Sky Diamond, Quincy, Fangio, Tito and Miana, as well as Small Tour horse Spot On, which he says should be enough to keep him busy! The plan is to prepare the horses for Grand Prix with the best training possible. “Quincy will be the main horse, and our hope is he’ll be ready for the Paris Olympics. We thought we’ll go over and base for the two years and see what happens,” says Jayden, explaining that the plan is to also hopefully qualify Fangio, Tito and Miana for the World Young Horse Championships this year. “In previous years, the age group winners at DJWTS [such as Fangio and Miana] have essentially been automatically offered a spot as an Australian-based horse and I’m hoping that stands again for this year. We just have to wait until it’s confirmed, but definitely the goal is to take them. And if Tito has a bit more experience and calms down, then I’ll probably put in a nomination for him to be considered for selection as well.”

Jayden is no stranger to Europe, having spent almost two years at Mount St John in the UK after travelling there in January 2017. “There were a few different trainers that came through, but I started off training with Emilie Faurie; he’s now been quite helpful in giving some advice on finding stables this time around. I also took a horse to Germany for the Young Rider World Cup in 2009; I stayed and worked there and sold that horse and brought another one back, and then in 2013 I took a horse over for the World Young Horse Championships. So I’ve had a few little few little trips, but this one will be definitely the biggest and the most horses I’ve taken over.”

As for where Jayden will be based and who he will train with, he says there are a couple of options – with probably the most suitable one in the Oxfordshire area in England, close to the main competition venues. “I think probably just about the entire British Olympic and European team from the last few years are all within about half an hour. So that’s definitely the area we want to be in,” he declares, adding that he can’t give away names until they’ve seen the horses and confirmed their commitment. “I hope they like them,” he laughs.

With quite of a few in the stable either competing or soon to be competing at FEI level, Jayden explains that being based in the UK will make a big difference in terms of the number of shows available. “We can be little bit more selective about where we take them, as we will have the luxury of a few more competitions within driving distance. At some point, we’ll take them over to mainland Europe to compete as well.” While living in the UK will mean that travelling and competing in EU countries will be a little more challenging travel-wise – especially with some of the complications that have arisen post-Brexit – Jayden explains the he has the most contacts and friends in England. “That’s why we went for England, as it’ll just be a bit easier to transition into.” 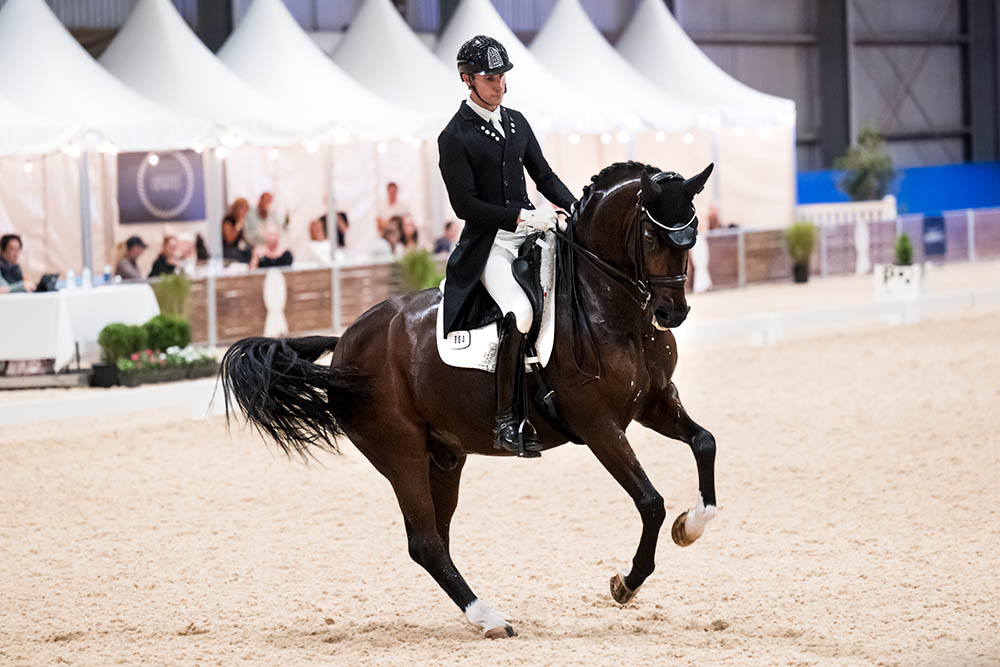 As for Jayden and the team’s departure, it ultimately comes down to paperwork – however it’s looking likely the Sydney CDI will be their last major event on Australian soil. “It mostly depends on the visa situation; all the visas have been submitted, but they’re taking a long time at the moment. I had hoped to be organised enough to go straight after the Sydney CDI, but I think it’ll be probably closer to June. And then I’ll get over there and hopefully start training straight away.”

For Jayden, heading overseas again for a longer stint to gain exposure and experience is exciting – albeit a little daunting – but he says he has every intention of bringing what he learns back to Australian shores. “The big thing is definitely coming back here. I think the value [to Australian dressage] is probably a little bit lost if we go over and don’t come back. It’s definitely important to get over there and learn and get the exposure and the experience and then hopefully try and bring back home the knowledge and everything that the horses have developed.” EQ