If you ever saw Julia Roberts astride a rearing horse in her wedding dress in Runaway Bride, you’ll appreciate she really can ride. The Hollywood veteran and star of current hit miniseries Gaslit is a devoted horse lover. 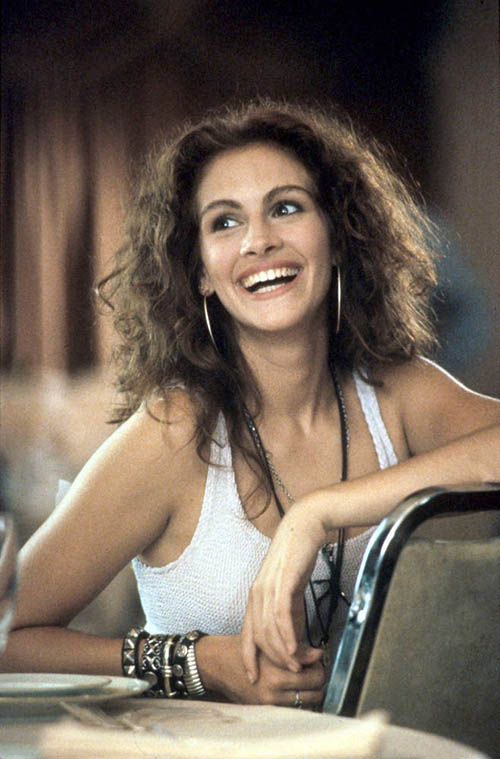 There was a time when Julia Roberts was none too sure about horses and she admits that she was nervous when she was a girl – but she took the bit between her teeth and has been having fun with horses ever since.

“I was very young when I first got up close to a horse and looked up at him with my knees knocking,” says Julia. “I was not very big and that ‘horse’ was probably a 12-hand pony, but it sure looked like a horse to me and I didn’t know anything about reading a horse’s eyes in those days so I took his stare to mean that he didn’t like me very much!

“With encouragement I took to the saddle though and did as I was told. I think I was probably too nervous not to, and yes, I was not unhappy when it was all over. Then I walked away and thought about it and I began to feel differently. The next time I met that pony I wanted us to be friends and the pony didn’t seem to mind too much. That was my turning point and I changed from being frightened to death, to wanting to be around ponies and horses all the time.”

That was how Julia Roberts actually started on the road to becoming a very accomplished rider and she has always welcomed the times when her many great acting roles have meant that she could get into the saddle once again.

“I have read many times that I am scared of horses and didn’t want to have to ride,” she says. “That’s not true of course, I think sometimes they pick up on something I might have said when talking about my growing up and people decide that I must still be nervous about horses. It’s quite the opposite.

“Like most riders I have respect for horses and, of course, a love for them but I have never been scared of them since those very early times. I don’t just enjoy riding, I like being around horses. Sometimes when you are making a movie you shoot the scenes when you are on a horse and then you have to get on with something else. I don’t really like that because I like to take my horse back to the stable and make sure he or sure has all he needs, maybe taking time for some grooming and just generally being together.”

Julia’s love of animals nearly diverted her from an acting career and Hollywood would have been the poorer without her as part of its star-studded family. “I never thought of being an actress when I was growing up in Georgia – I actually wanted to be a vet,” she admits. “I was fascinated by animals from an early age and I thought being a vet would be great because I could work with animals and help them recover from their illnesses. When I realised how difficult it would be to qualify, I changed my mind.

“At school my claims to fame were that I could play the clarinet and I was quite good at English. I didn’t see myself playing the clarinet as a profession, so I studied to be a journalist. That all changed when my brother Eric began to get work in Hollywood. He seemed to be enjoying himself and I was drawn to trying the same thing myself.

“I had a few acting lessons, but I think I was too impatient to get on and I was lucky enough to get a few breaks. One of my earliest movies was Mystic Pizza and I was quite surprised when someone actually recognised me from the movie.”

She has never lost her love of animals though and has come a long way since those first nervous equine encounters. “Don’t think I am blasé about horses,” she insists. “I’m not. I left being nervous about riding all those years ago, but I am still very respectful when I meet a new horse for the first time. It’s important we get to know each other before we start work.”

Julia does not restrict her riding to her movie career. She owns a ranch in New Mexico and spends a lot of her time there on horseback. “It’s in Taos and I get there as much as I can. I love the open space, and yes, I ride there a lot. Sometimes we have a long hack but other times it’s just in the area. When I was little I used to like barrel racing, it was always a lot of fun and seemed quite daring when you are on a turbo-pony. I still think it’s fun but the pony is a little bigger these days. I don’t ride in rodeos any more, but when I was little most local rodeos had special events for kids and that’s where I did my barrel racing. I guess I’m still a kid at heart because I sure love that barrel racing!” 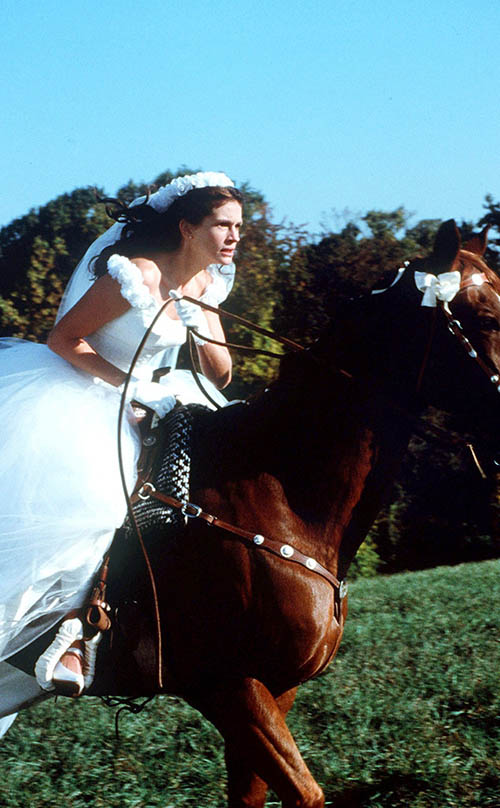 Julia Roberts starring in the movie 'Runaway Bride', in which she co-stars with Richard Gere. 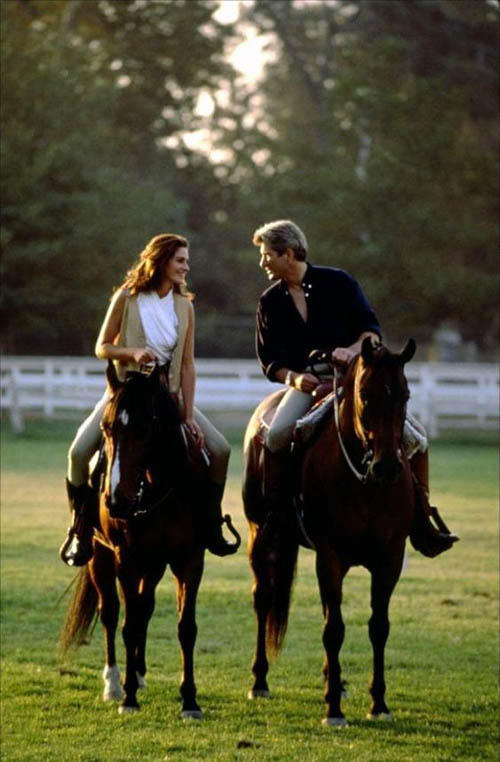 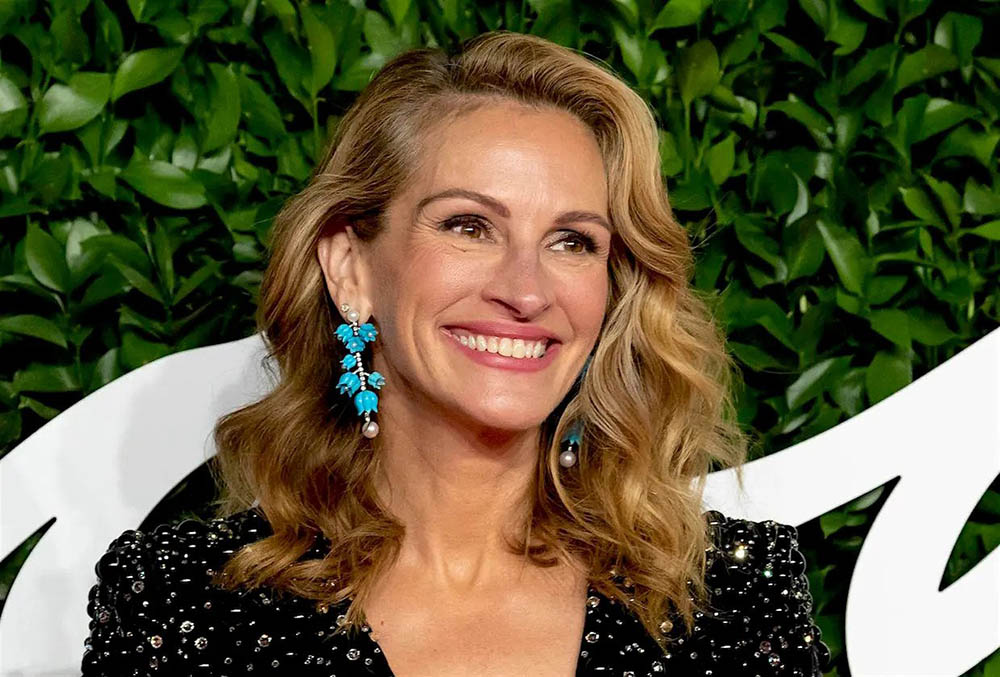 Julia actually owns a ranch in New Mexico and spends a lot of her time there on horseback.

Julia has ridden in a number of movies and made a very popular documentary about the horsemen of Mongolia. “That was just fantastic to make,” she recalls enthusiastically. “I lived there for a while during filming, and what they don’t know about horses is not worth knowing. They have a very different approach, of course, but they have a great relationship with their horses which are mostly taken from genuinely wild stock. It was an absolute education to spend time with them and you just have to respect them and their abilities. By the same token they know that we have a totally different style of riding and they respect that in turn. They were good fun too and I was sorry that we didn’t have even more time together.”

If anyone doubts that Julia is a really good rider, get a copy of the movie Runaway Bride in which she co-stars with Richard Gere, another excellent rider. It is said that Richard only agreed to do the movie when it was confirmed that Julia would be his co-star. Maybe that was because he had seen the horse-riding scenes in the script. At one stage Julia has to gallop away while wearing a traditional wedding dress complete with headdress.

“It was pinned on tight,” she recalls. “I pinned myself into the saddle too. There was a bit of rearing too – and wearing a wedding dress when your horse is expected to be a rearing is not the easiest – but I stayed on okay and we had some fun in the takes. I’ve seen it said that I had a stunt rider to take my place but that’s not true. I am not a show-off but I wanted to do all the riding myself.”

So, there is no doubt that while Julia Roberts is still the toast of Hollywood with all its glamour and glitter, she is never happier than when she has pulled on her jeans and is back in the saddle – maybe for another barrel race! EQ