South Burnett Equestrian Group has created a dressage series for older horses and riders, where the focus is on safety, horse welfare, correct training – and having a whole lot of fun! 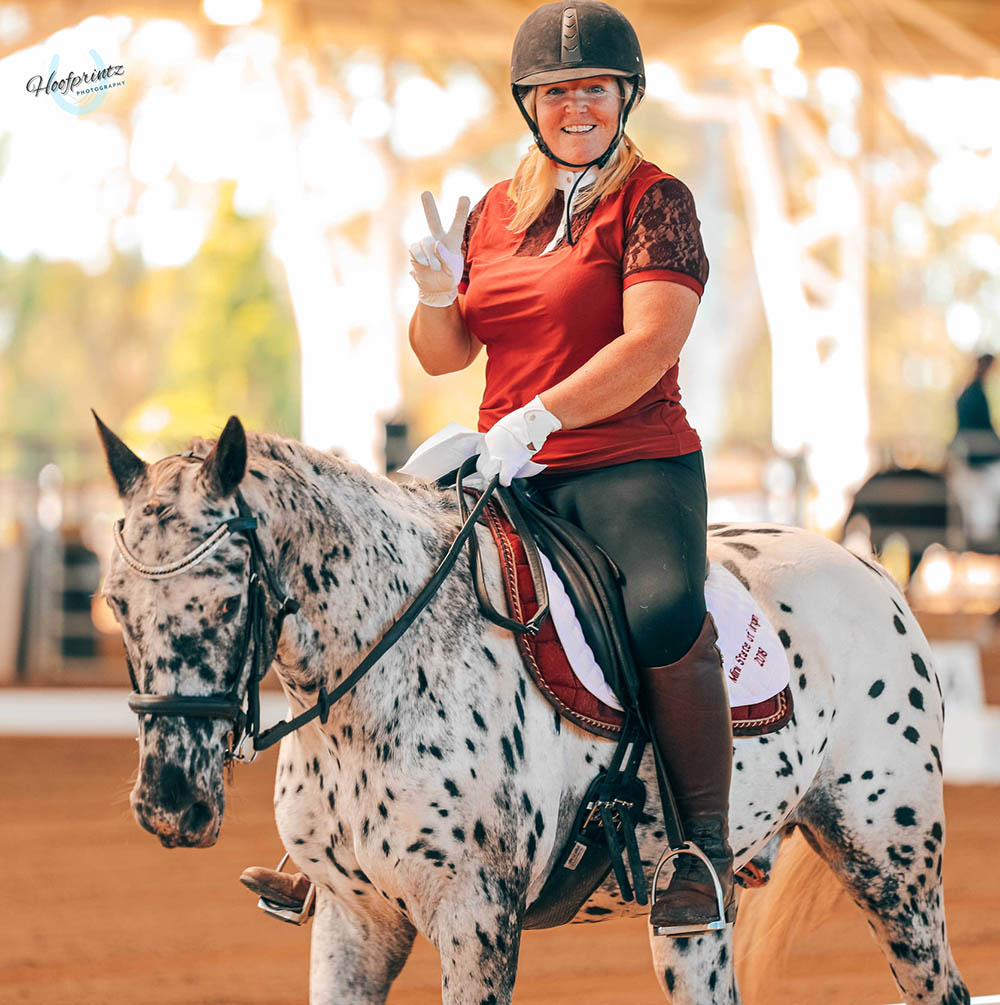 Kirily Isherwood, winner of the best 'Note from Home' at the inaugural 'Great Day of Geriatric Dressage'. © Hoofprintz Photography.
Formulated to deliver a low starch, high fibre complete feed, Pure Vitality is the perfect feed for mature horses of any discipline

“We don’t like wearing white jods, we don’t really like plaiting, we don’t like going to events where people turn up in flash outfits and flash floats,” says Corby Cunnington with a grin. “We wanted an event where really and truly we were out there to compete against ourselves.”

An integral member of South Burnett Equestrian Group, Corby recognised the need for events that catered to older riders who may not have set hoof in a dressage arena for many years – if ever – and wanted to do so in a relaxed, low-key environment with an emphasis on fun. ‘The Great Sport of Geriatric Dressage’ was designed to meet this need; aimed at riders 50 years of age and older and/or horses 18 years or older, ‘The Great Day of Geriatric Dressage’ was first held in November last year at the Queensland State Equestrian Centre (QSEC). Entries were full within 72 hours of opening.

“We just wanted people to get out there and feel comfortable,” says Corby, who explains the organisers have purposely kept the events small at around 30 entries to allow plenty of flexibility for those competing. Competitors choose the level and tests they ride – for example, if you want to do the Prepatory A test twice, you can – and their test caller can say anything they like. “You cannot be eliminated, provided you end the test with one leg each side of the horse,” laughs Corby.

“You can wear what you like and you can use whatever gear you like, provided that it’s safe and horse welfare is addressed; at any time, the judges will pull you up if there’s an issue. There’s no gear check on these days. Instead, I’m constantly on the lookout for anything that’s unsafe and not promoting horse welfare, as are the judges.

“We have two Olympic level judges who are in this with us, Mary Seefried and Maria Schwennesen,” continues Corby. “I worked very closely with Mary on EA committees and Maria has been a friend of mine since I was a teenager. I can’t praise them enough; they are so professional and manage to say exactly the right thing every time.

Mary Seefried was thrilled to be a part of the inaugural event: “This concept from Corby Cunnington has captured the imaginations of older riders around Australia! It was wonderful to see the older horses as well, with many over 20 years old. They were so fit and well looked after and a credit to their owners. Besides that, it was such a lot of fun for everyone in a very relaxed atmosphere!” 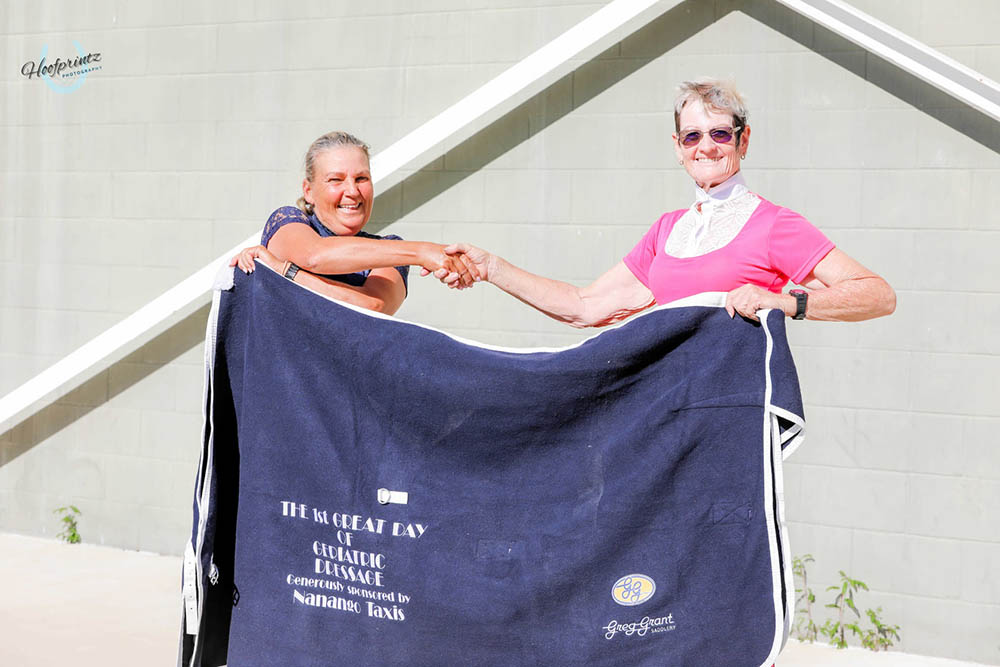 Before the test, riders are given the opportunity to hand in a ‘note from home’ to the judges. “These notes have become a really big part of the competition,” explains Corby. “We have had some amazingly written letters; very, very funny ones… for example, ‘Please excuse X from rising trot. She has no knees left!’ After your test, you also get to have a little chat with Mary and Maria.”

The event program is designed so that competitors are able to ride a test in front of both judges, and the time between the two tests is tailored to suit the horse and rider where possible. “If you’ve got an older horse and you really think that one preparation for the day is enough, you can go straight from Mary to Maria so you don’t have to warm up twice. (Equestrian Australia’s) 45-minute rule between tests… if you’re on an older horse and they’re up and they’re warmed up and they’re rearing to go, doing your two tests straight up instead isn’t a bad thing.

“If you’re really nervous and you’ve been sitting on your horse for an hour and a half, because this is your first competition ever, you’re 66 and your horse has only gone campdrafting previously, then going in and doing the two tests consecutively might be just what the doctor ordered. Some people prefer a break between tests, and that’s fine. It’s your choice.”

When it comes to prizes, placings are awarded – but so are numerous other awards handed out by the judges on the day. “We have some prizes for placings, and a rug for the Double Geriatric winner – an award based on test scores as well as horse and rider ages. The rest of the prizes, we don’t even have a list. Mary and Maria came up with their own awards! The important thing is that you’re a winner because you’re out there doing it.”

Corby has been involved in competitive equestrian sport all her life, in dressage, eventing, showjumping, endurance and most recently in the sport of driving where she is the Chair of the Driving Queensland committee. She has FEI-level dressage ponies, and while they don’t top the results at open EA competitions against purpose-bred Warmbloods, Corby “has a ball” competing them and achieving very respectable scores nevertheless.

“With ‘The Great Sport of Geriatric Dressage’, we just want to encourage people to get out there on their homebred ponies. You don’t need to spend $30,000 – it’s lovely if you can afford it – if you have a pony, just get out there. We’ve had some people enter who have never done anything before. We’ve got one lady entered for our next event who’s only ever done sporting and tent-pegging before. We’ve had Warmbloods, but also pure Arabs, a couple of Clydesdales. We’ve had some stock horses, native ponies, riding ponies, and a whole heap of horses I’m pretty sure nobody knows anything about their background.”

Corby is currently involved in developing coaching programs and the new driving rule book and competition pathway, and she explains that her ethos is centred on promoting safety, horse welfare and the Training Scale. Corby believes that EA rules in some cases can actually be restrictive in terms of making people safe, making horses comfortable and offering the opportunity for skills development, and this is partly the reason ‘The Great Sport of Geriatric Dressage’ was developed.

“Safety, horse welfare and the Training Scale; I just talk and talk about these three things. Everybody gets bored to tears with me!” she laughs. “But it’s always got to be about those three things. It’s not about the winners. People will come to the top from a program that promotes safety, horse welfare and the Training Scale. Grassroots learning the right way… whether you’re on a pathway that takes you to the lowest levels or the highest level; it’s the same pathway.” 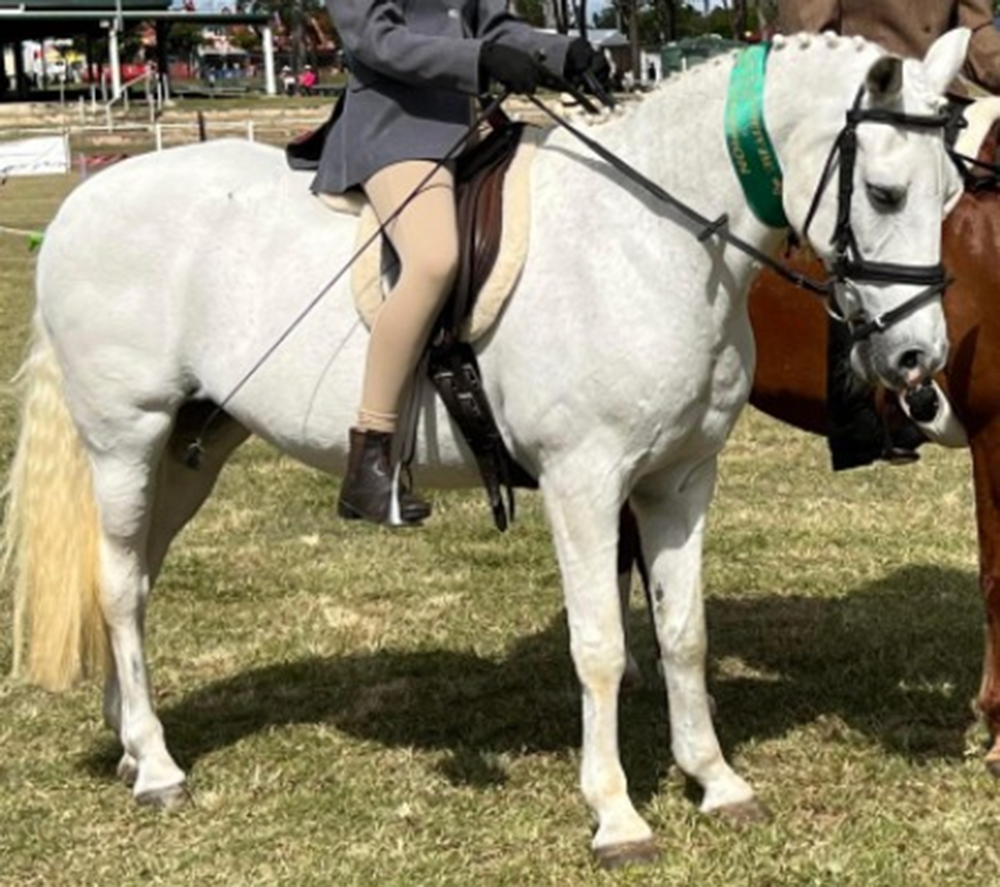 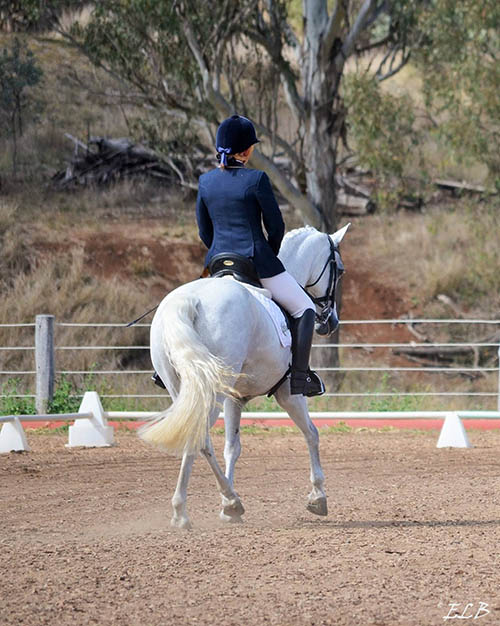 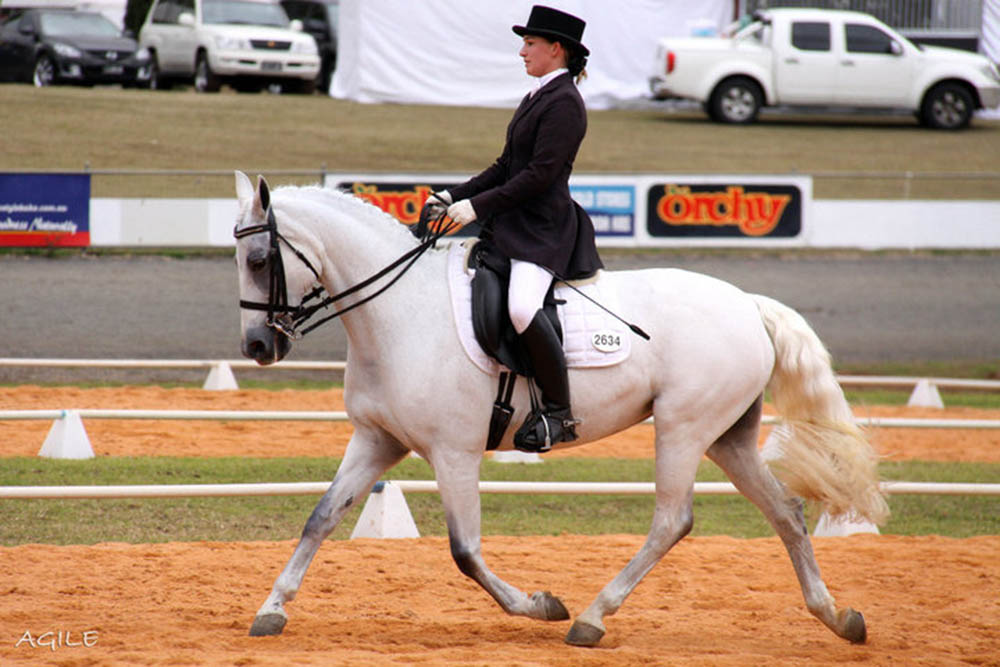 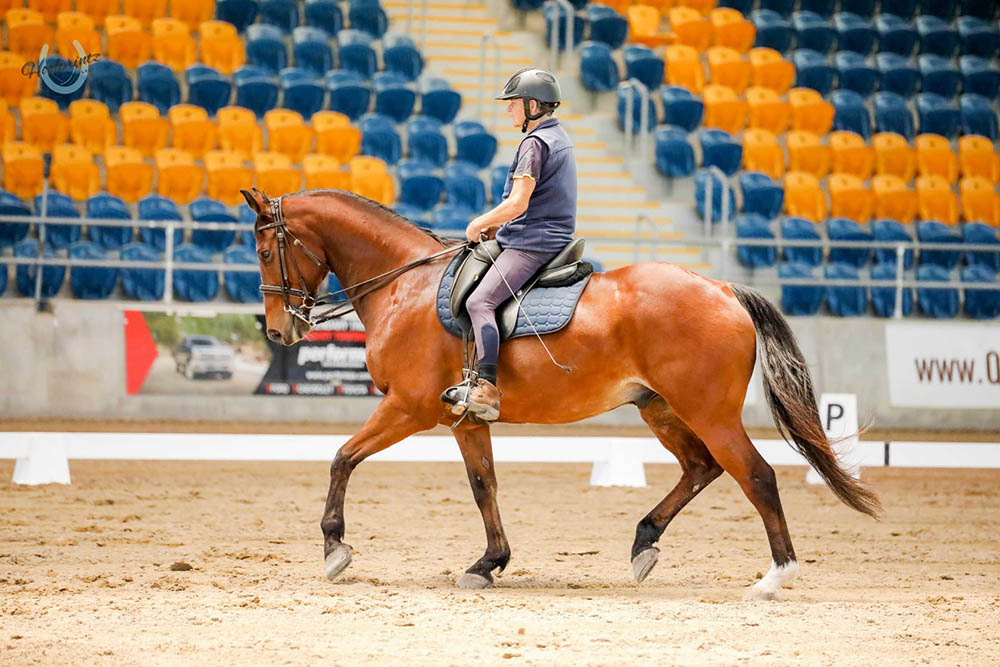 Fletcher Jones, winner of the Double Geriatric section, rider over 50 and horse over 18, at the inaugural event. © Hoofprintz Photography.

AGE IS JUST A NUMBER

Having spent time competing in England and seeing many, many people competing on older horses, Corby believes we don’t value our geriatric horses enough. “I’m absolutely appalled in Australia how quick we are to get rid of older horses,” she says, explaining that she has a 34-year-old pony “that can still pull out a Medium test” and numerous horses in her stable that are in their 20s – all out there competing and looking incredible. “Soundness is a product of never being fat; never having inflammatory cascade set up by being ‘show fat’,” she muses.

Based in south-east Queensland, South Burnett Equestrian Group is a close-knit little club that doesn’t have home grounds, and instead holds clinics, rallies and events across a relatively wide area at different venues. “We go anywhere,” says Corby. “We float all around the South Burnett area and even further afield. Our membership is $35; I reckon that’s the cheapest in the country!”

Due to the popularity of these initial competitions, Corby and the team have also offered to run similar events for other groups. “Interested clubs just need to find a location for me to enquire about, with suitable dates to suggest, and then find two pencillers, a bossy steward and an announcer. That’s it! We will find the judges, book the venue, find the sponsors, promote the event, do the Nominate entries and manage the results remotely.”