For West Gippslander Mat Holz, the magnitude of what it means to claim Willinga Park’s World Championship Gold Buckle campdraft is still sinking in. One thing he knows for sure is that Graeme and Jody Rozynski’s Nonda Last Frontier is a pretty special horse. 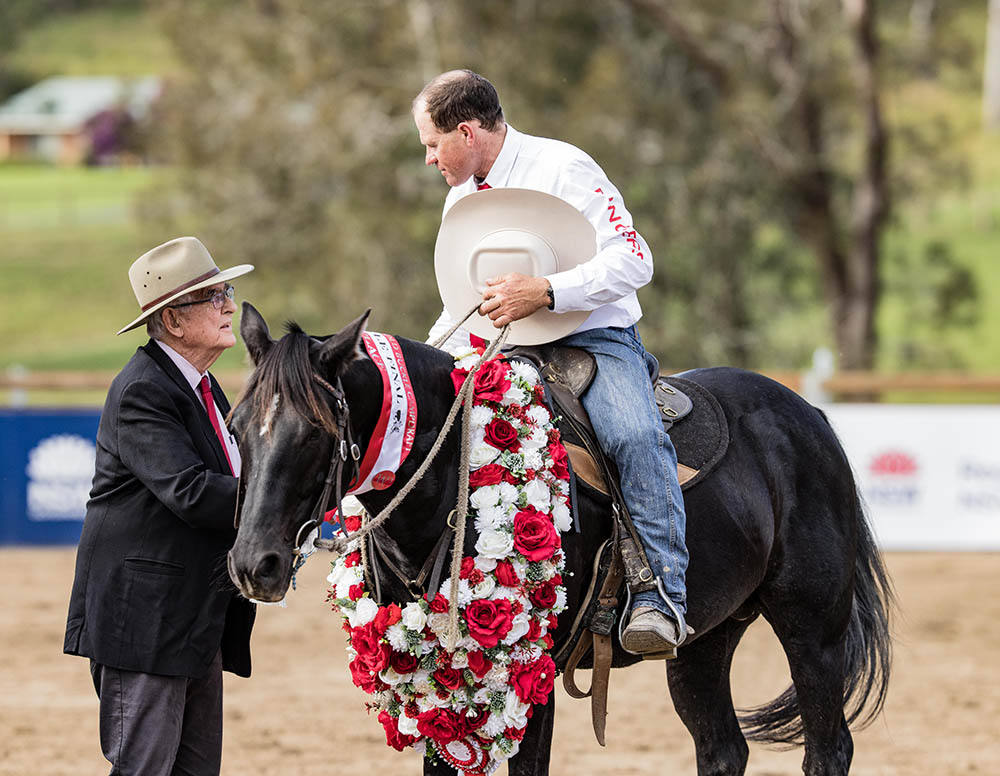 “I have a theory that if you’re not going forward and bettering yourself, you’re falling behind,” says Victorian campdrafter Mat Holz. A few years ago, Mat made the trek from West Gippsland to outback Queensland to compete in the prestigious Cloncurry Challenge – and it was an eye opener.

“Going there and seeing how those guys had their horses going, and then coming home and realising that my horses were nowhere near good enough yet… I knew that I needed to better myself and my horses, so I set about trying to do that.”

It seems that Mat has been successful in his endeavour. Partnered with Graeme and Jody Rozynski’s Nonda Last Frontier, he rode to victory at Willinga Park’s fourth World Championship Gold Buckle Campdraft – the richest of its kind in Australia, with a $100,000 winner’s cheque on the line.

“It’s quite hard to believe if you look back on it,” says Mat of his recent win. “You look at it and just wonder whether it did actually happen.” When he posted a score of 89.66 as the third-last to run in the final, he knew he was up there but wasn’t quite sure whether he’d topped the leader, Hugh Miles riding Chic Acres.

It wasn’t until after the last horse had run that he found out exactly where the chips had fallen. “I wasn’t 100 per cent sure, so I was sitting quietly waiting for those last couple of rounds. It’s a strange feeling to win an event of that magnitude. There’s a lot of satisfaction and happiness in being able to achieve something like that. It was hard to believe what unfolded and how things fell in place.”

Mat and Frontier added to their semi-final score of 89.66 to post an aggregate of 179.32; Hugh and Chic Acres’ aggregate was 179. “I felt for Hughey. I know what that’s like to be in that position, whether you just get knocked off or whether you just fall short… and you magnify that with the event that it is, the prestige and money that is there. A third of a point, it’s not much.”

Mark Buttsworth riding Yulgilbar Agile Playgirl placed third with a score of 178.33, with the pair also recording the highest aggregate across the whole event. 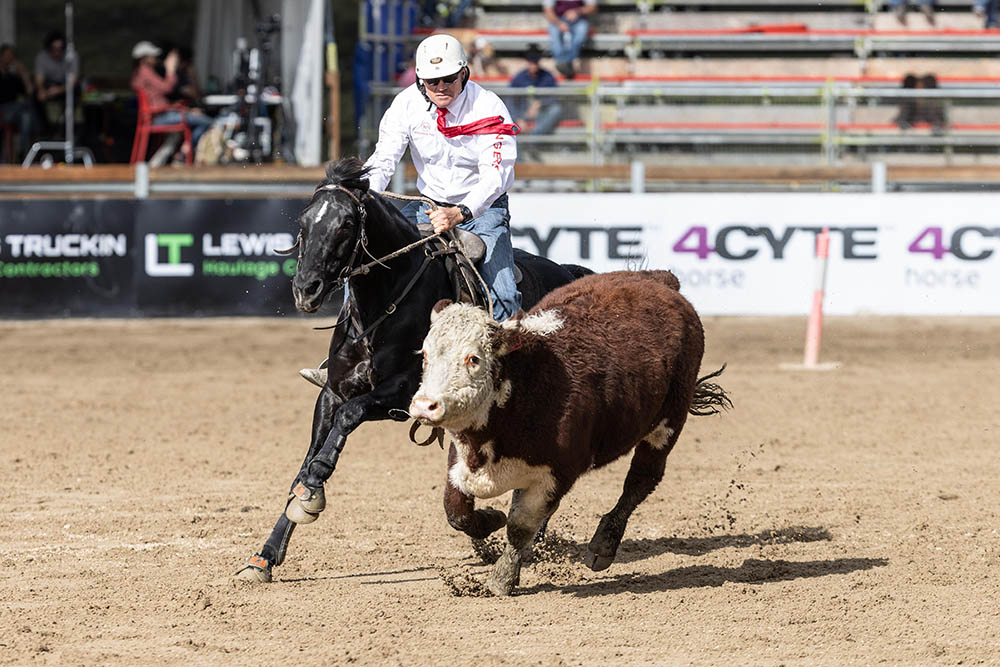 “They were just cherry ripe
for competing their best.
”

Mat and Frontier were consistent throughout the event, posting scores of 85.66 and 90 in the two qualifying rounds. He says their lower score in round one reflected the steer they selected more than anything else, highlighting just how important it is to cut the right cow – which is of course skill, but also a little bit of luck.

In addition to Frontier, Mat also rode gelding Paris Reims and mare Taraway Grace in the Gold Buckle – and he was happy with their efforts as well. “All three horses were spot on and did everything I asked of them. They were primed for the event; they all have had success throughout the year and I felt like they were just cherry ripe for competing their best. Unfortunately, I bombed out on Gracie in the second round; I was first out and took a steer that was probably, looking back, my mistake. It was a beautiful steer, but he was a little soft for her. She’s a mare that excels on tougher cattle.”

Paris Reims made the semi-final alongside Frontier. “Watching quite a few runs, you get a feel for how (the cattle) are and what they’re doing typically. Having been fortunate to have two in the semi, it gives you that extra little chance. I think the biggest thing for me was just knowing that my horses were spot on, so I could go for it.” 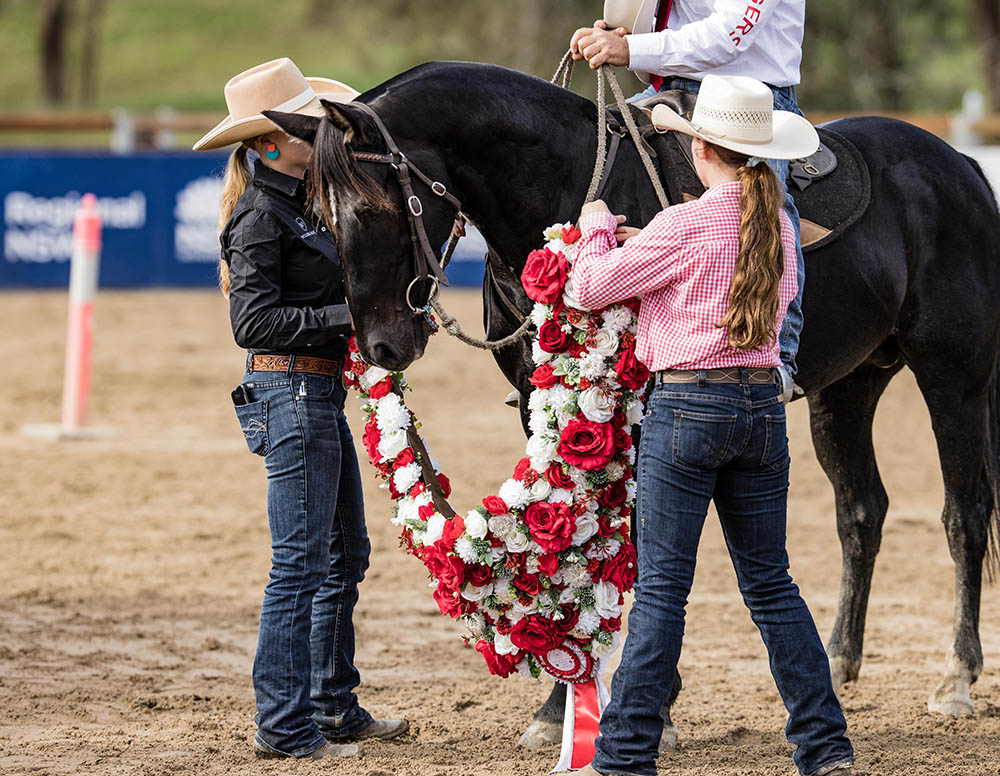 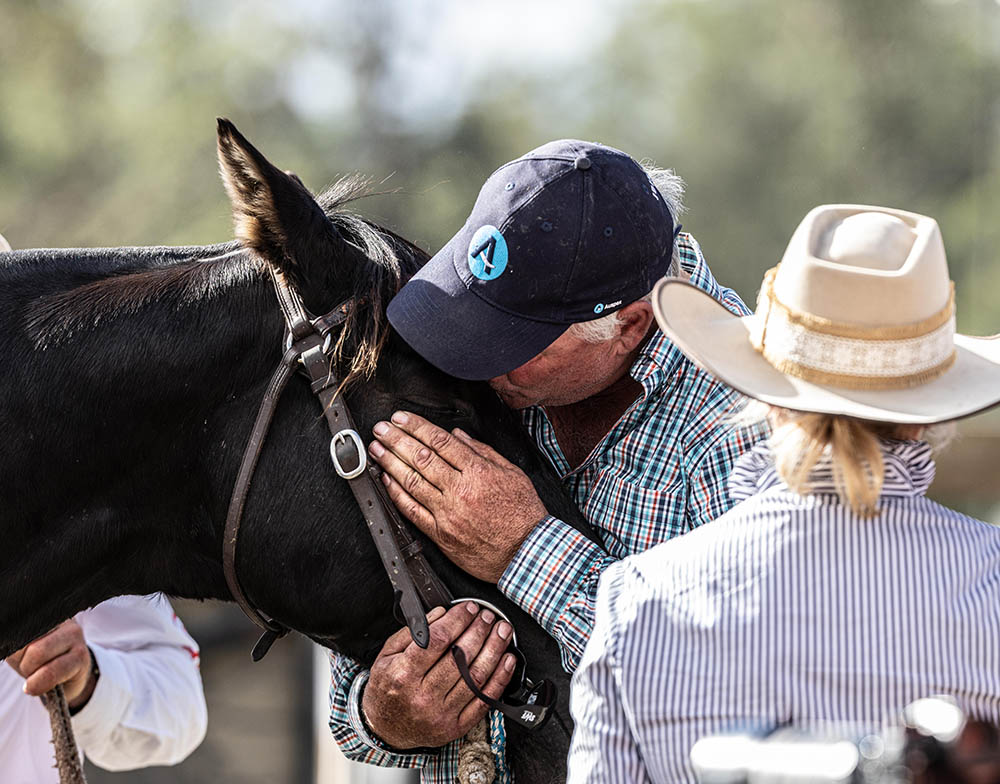 “His ability to read a cow is exceptional.”

“Nonda Last Frontier has gotten better with age and experience; he’s a super horse and just a real trier. He gives everything, that’s one of his greatest qualities. He just excels at being wherever I want him to be and he’s a pleasure to ride,” says Mat. Although Mat had contested the Gold Buckle prior in 2018 and 2019, it was the stallion’s first shot at the lucrative event.

Mat worked with Frontier as a young horse, preparing him for his Futurity (an event for three-year olds) at the Australian Stock Horse National Show. “He was not quite mature enough for that, and so we sent him home and let him mature. Graeme did a great job over the couple of years that he rode him and prepared him to draft.

“I was riding him one weekend when I was doing a clinic at their place – Graeme and Jody run clinics for me and have a great facility – and I said something about Frontier being ‘a pretty special horse’, and Graham said, ‘Well, you better take him back and prove it!’”

Mat took over the reins again four years ago and has been riding him ever since. “He went through each grade, winning his Maiden and Novices, and now several Opens. It’s hard to win a draft at any point in time, so those that are able to go through the grades and then win Opens, they’re pretty special horses.

“A great mate of mine, Eric Joosten, asked me a while ago what I love so much about Frontier. I said, ‘When I ask him to do something and point him in the direction, he’s there. He’s 100% with me and he gives his all’. He goes where I want, and even if it’s a little different than what he’s thinking, he still obliges. Sometimes he gets it right and I’m wrong! He’s also got great cow sense; his ability to read a cow is exceptional.”

Mat’s partnership with Frontier’s owners began at a campdraft some years ago when he was judging: “I hadn’t long been in Gippsland and was judging a draft at Salt Creek. Graeme got a bit wide – he still maintains that he wasn’t – but he got a bit wide and I cracked him off. He reckons he nearly broke his neck looking back over his shoulder to see why I cracked him off! 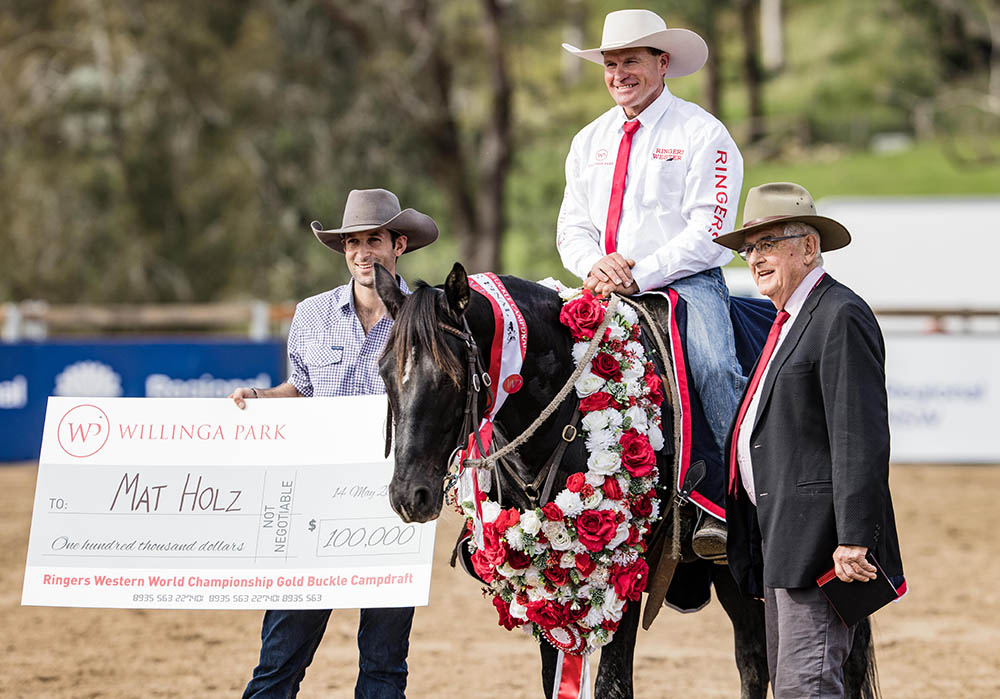 “Not long after that we formed a pretty good friendship. They’ve been running clinics for me at their place in East Gippsland for probably seven or eight years now and have been great people to share the drafting journey with. It’s great to be able to share this journey (at Willinga Park) with them. We’re always helping one another; it’s not just the big events. I’ve got to pay a massive thanks to them, just being able to do what they do supporting me and trusting me with this stallion. He lives with me while I’m competing him; he’s a valuable stallion, and for them to trust me with carting him around is quite a big thing.”

Graeme and Jody breed to Frontier, and already his progeny is showing promise. “Graeme has three competing by him, and they’re going super. I had started to prepare a gelding by Frontier out of Jody’s best mare, Tricky. He’s a slashing type of horse; he’s very stylish and moves just the same (as Frontier). I believe he’ll make a very special horse as well. He’s got quality.” 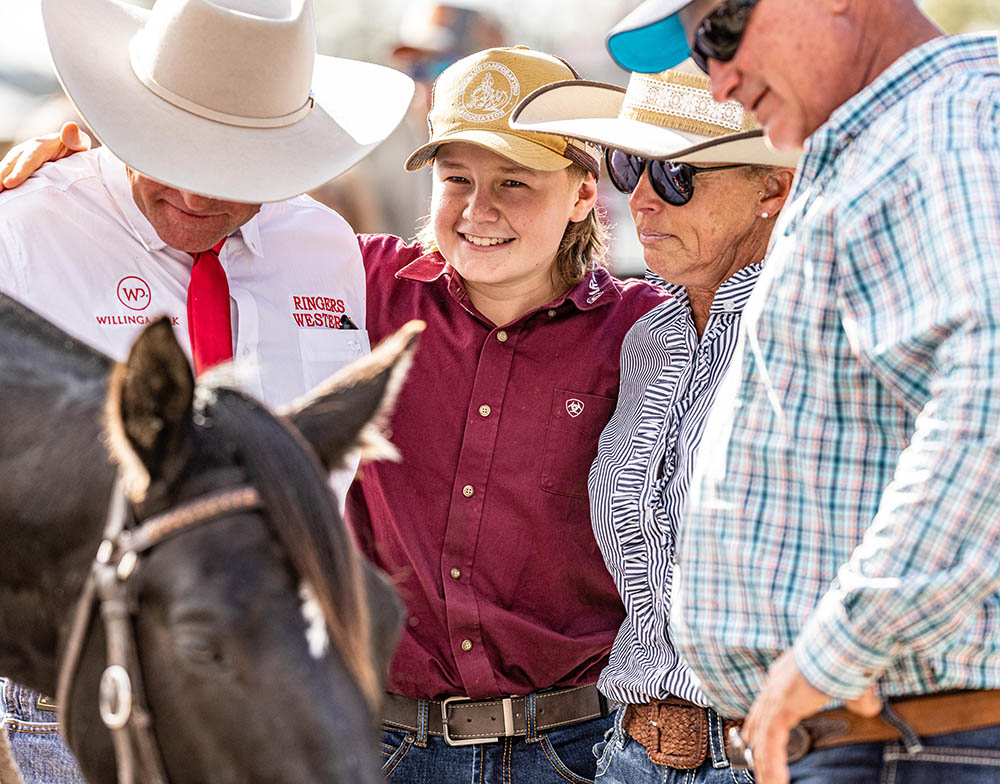 Mat and his son Will with Frontier's owners Graeme and Jody. © Jo Thieme/Willinga Park. 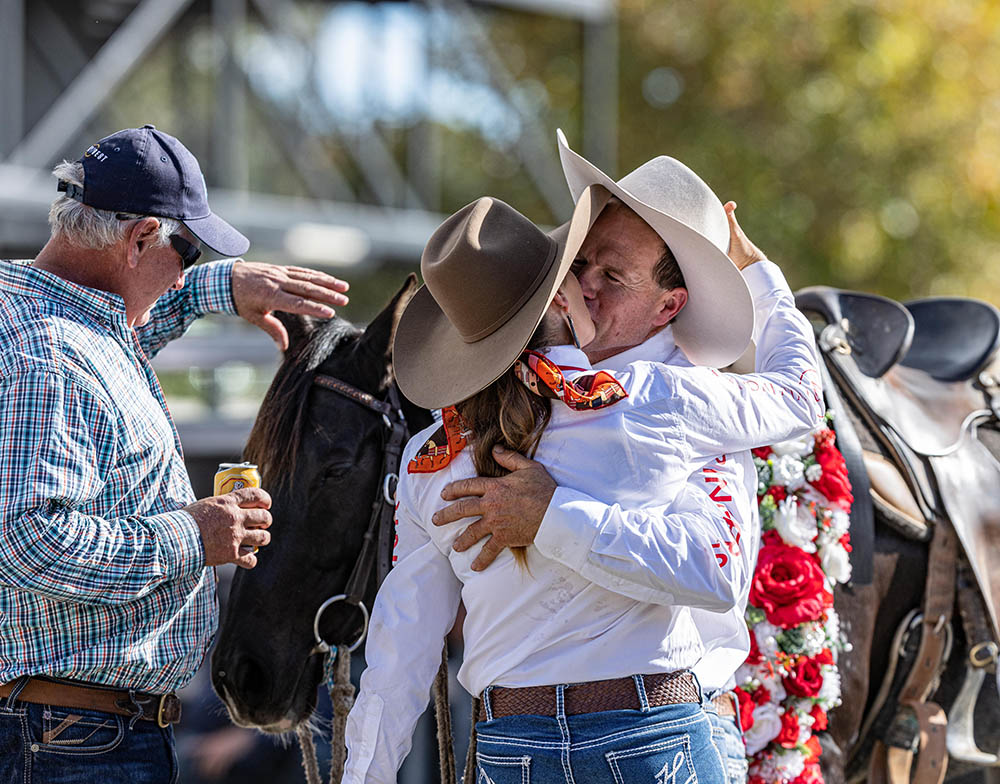 “You got to give full credit to
those people involv
ed.”

“It’s one of those massive events that changes the shape of our industry,” says Mat of the Gold Buckle itself. “Alongside the Nutrien Classic Sale, they are events that just change the industry for the better. People wanting to breed and present quality horses… then you can get them to an event like Willinga and showcase them there on the stage they present.”

Mat recalls fellow campdrafter Troy Palmer speaking quite a few years back about his hopes of running the Gold Buckle with the support of Terry Snow and Willinga Park. “It’s one of those hard things, getting people to put money towards entry fees, the cost of training and all the rest, but to have massive prize money… it justifies Troy and Terry’s vision and the support it receives.”

The concept of the Gold Buckle is a little different, which Mat says provides added interest. “There are the two qualifying rounds, and then a start-from-scratch semi-final into a final. Having the qualifying rounds to determine the start list for the semi-final is unique; it’s great that it’s got its own unique system. Obviously the system works, because it’s been supported so well.

“You’ve got to give full credit to Willinga Park and the team involved in organising the event… the time and effort they put in. The facility and the logistics around running such an event, it’s enormous and nothing’s forgotten. Because it was so wet, there were horse trucks parked in tricky spots and they were probably never going to get out without machinery on the last day. I was told there was a machine waiting Sunday morning to help them out; they didn’t even have to ring anyone. Little things like that, it takes a lot of organisation.”

The rain was certainly a feature of the event, in particular during the qualifying rounds, however, the arena held up incredibly well. “The ground held up enormously well. I never saw a horse slip on it and it never felt at any stage to me that it was an issue, which gives you the confidence to ride to win,” enthuses Mat, who was also impressed by the arena expansion and says the surface was seamless with no alteration from the original arena to the extended sections.

Campdrafting has long been a family-orientated sport, and Mat was thrilled to have his sons share in the moment at Willinga Park. “My youngest son Will, he travelled there with me and my oldest boy Michael was there, he had a run. And then my middle boy, Johnny – he’s at uni in Wagga – I think he’d had FOMO all week for not being there, but once he heard the news he jumped in the car and came over to celebrate with us!” says Mat. “I’m very fortunate to have the support I do have, with family and friends. It was pretty special to have my partner Fiona Gordon there. It was actually Fiona that encouraged me to go this year, so I must thank her!”

Hailing from Victoria, Mat spends plenty time travelling up and down the east coast to big events such as the Gold Buckle – but he says the hours in the truck are worth it. “They are the events you try and compete at to showcase these horses… you’ve got to keep putting yourself out there to compete against the best and to better yourself.” EQ

Equestrian Life would like to thank Terry and Ginette Snow and the Willinga Park team for running yet another fabulous event. You can re-watch the final of the Gold Buckle here.

Buckle Up, It’s All Rocking at Willinga Park – Equestrian Life, May 2022.