The West Australian combination of Kenya Wilson and Sandros Salute MW proved they can match it with the best at Melbourne International Three-Day Event. The 26-year-old rider and 11-year-old warmblood are on the rise, with an exciting road ahead.

“He felt super-confident
and gave me a great ride.”

In the June issue of our magazine, Heath Ryan identified young West Australian rider Kenya Wilson as a rider to watch, citing her impressive win at Brigadoon CCI4*L earlier this year with her horse, Sandros Salute MW (Equestrian Life, June 2022). Of course, the win at Brigadoon was no overnight fluke; Kenya has been steadily building impressive results on the WA eventing circuit for many years and actually won the Capel CCI4*S with Sandros at the end of last year, among other placings.

However, for many in the eastern states Kenya was relatively unknown. This all changed at Melbourne International Three-Day Event (MI3DE) at Werribee in June, when she and her equine partner finished fifth on 36.4 in the CCI4*L against the nation’s best. As Heath noted in his July column (Equestrian Life, July 2022), Kenya was, in hindsight, perhaps unlucky to not have been placed on one of the two Australian Oceania Championship teams at MI3DE.

Speaking about her brilliant run at Werribee – where Sandros Salute MW posted his best CCI4* dressage score to date and added just 1.2 cross country time faults and 0.8 jumping time faults to their overall total – Kenya says she could not be happier.

“We have been working hard on our dressage and I believe we can still achieve better, however I was extremely happy with our result – even as my hair bun came out just before I entered the arena! Sandros is an incredible cross country horse; he felt super-confident and gave me a great ride on the day. Again, I was very happy with our show jumping. I can picture the exact moment I could have made up the two seconds, but for Sandros to jump clear after a big cross country course the previous day was fantastic. This horse just tries his heart out!”

THE DRESSAGE HORSE WHO WANTED TO JUMP

“As a little girl I loved the idea of riding ponies,” explains Kenya of where her love of horses began. “My mum took me for my first riding experience at three years old, and I started having lessons when I turned four at the local riding school.”

Her connection with eventing began – like many – at Pony Club when she was aged 11 with her pony named pony Huckleberry. Five years later, she contested her first FEI event and has steadily moved up the grades ever since. Now at just 26 years of age, she’s reached four-star level with the talented Sandros – and as evidenced at MI3DE, she’s not merely making up the numbers.

Sandros Salute MW, a rising 12-year-old warmblood by Salutation out of Vera’s Star (Housebuster), was bred in New Zealand as a dressage horse. “At the time (of finding Sandros) we had recently retired my older mare, Winifred Fair, from high-level competition and put her in foal,” explains Kenya, adding that Winifred Fair is now aged 22 and loves competing at 45cm eventing and Novice dressage with a lovely junior.

“My other mare, Barrabadeen Aspire, was sold as a show jumper, so I was looking for another horse. With the help of Joanne Bridgeman, my coach Stuart Tinney and I went to look at some horses in NZ and we found Sandros; he was bred for dressage, but had decided he preferred eventing and was competing 105cm level.” Sandros was purchased by Kenya, in conjunction with her stepfather Ian Campbell and mother Lynette Winteringham, who remain part owners.

“Sandros has been an incredible horse; he is so willing and trainable,” says Kenya. “We did have a bit of a mishap and setbacks at the start of 2019 where he had a serious paddock injury, which took six months to heal with the incredible help and perseverance of our vet, Dr Warwick Vale. And then of course Covid happened.”

When asked what the gelding is like to ride and train, Kenya smiles: “Sandros gives me the most incredible ride and just loves his job. He is quite the character; his go-to is his grumpy face whenever there is food around and he gets a little obsessed,” she laughs, adding that her mother has been banned from giving him liquorice. “He is also quite the charmer with other horses and loves making friends – and he loves nose tickles!” 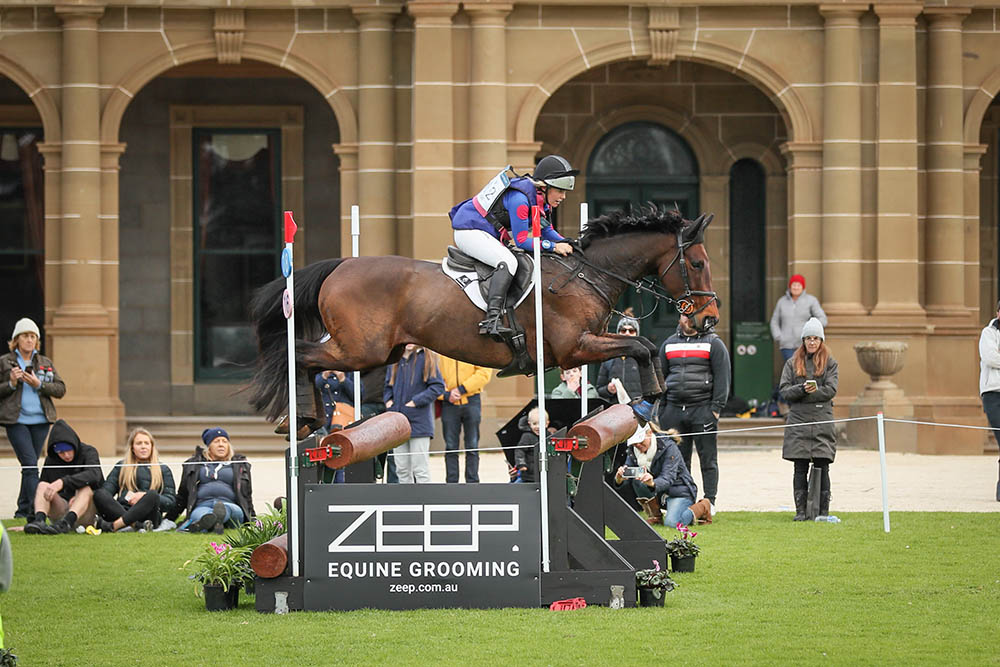 Kenya Wilson and Sandros Salute MW were fifth in the CCI4*L at MI3DE. © Michelle Terlato Photography.

“Whilst some of our classes have lower numbers than over east, they are very competitive with some amazing horses and riders coming through the grades,” says Kenya of the WA eventing circuit. “We have a great range of high-level course designers that travel from over east and we have a couple of good designers that are building up their qualifications here, as well as some very passionate eventing committees that want the best for our riders.

“We are lucky enough to have five FEI competitions a year, where two have offered long formats this year! Again, we are also fortunate that within WA the furthest we travel to an event (for those that live in Perth, such as myself) is three hours.”

Kenya trains with Stuart Tinney, who travels over multiple times a year, and thanks to the wonder of technology can deliver dressage lessons via phone. “I also have show jumping lessons here in Perth with David Dobson, and Equestrian Western Australia High Performance have regular squad clinics with national and international coaches.”

Kenya says the list of people who have impacted her riding over the years is huge, but at the top is her stepfather, Ian Campbell, who used to be a high-level show jump rider: “He has helped me out a huge amount over the years with his experience.”

In terms of travelling east to chase the big events such as MI3DE, Kenya says it is always a little nerve-racking the first time she travels a new horse over the Nullarbor: “You don’t know how well they will travel when it comes to eating, drinking, and maintaining weight. I have been lucky that my horses have been great travellers; the worst I have had is Sandros dropping some weight on the way home and reducing his eating. Winifred Fair was the opposite and would put on weight and feel far too good at the other end!

“On the long trips, you need to make sure they aren’t on a diet that is too protein-rich as they are standing still for long periods of time. We plan our stops for overnight, so the horses can have a good rest in safe yards and get them off once during the day to get their heads down. We try to get from A to B each day as quickly as possible with as few stops as possible, so they can have more time off at night.”

Like many riders, Kenya leads a busy life that not only involves eventing horses – but also a day job that helps fund them! “I am a full-time teacher at my local senior high school. I generally try to start riding by 5am so that I can get the horses ridden before being at school around 8am. I have the wonderful Ebony who helps me from Tuesday to Thursday to get all the horses done in the morning, which is a great help. Sometimes it can be hard to get out of bed in the dark, but I know that I am much better in the morning than the afternoons. I also manage to fit in a little bit of coaching where I can – sometimes in the afternoons following work during the week.”

Sandros is, of course, not Kenya’s only horse she’s riding – she has three young horses in work as well. “Winifred Fair’s foal, Stella, is now four rising five, and I also have a two-year-old Kenlock gelding, a young DVZ mare that is for sale, and another young horse named Homer who we have just bought and who will hopefully arrive next week.”

As for her plans with Sandros for the rest of this year, Kenya will compete once more in August before having a well-earned break. “Sandros has just come into work after a nice break post MI3DE. He will compete in the CCI4*S at Wooroloo in late August and then will have another break when I go to Europe in September with my family and partner to watch the FEI World Eventing Championships and then go sightseeing. Unfortunately, by the time I get home it looks like I will have missed our last two FEI events for the year and of course Adelaide CCI5* (the Australian International Three-Day Event) has moved to April next year.

“The five-star at Adelaide is definitely an exciting goal, as is competing on a senior Australian team. As more information arises regarding next year, it will be much easier to have a better idea of my plans; the move of Adelaide has also meant some of our local FEI events are looking at moving to help accommodate riders to qualify for Adelaide, so at the moment I’m just sitting on my hands waiting to see what’s next.”

With an impressive long-format, four-star performance on the board that proves they can match it with some of the nation’s best, WA’s Kenya Wilson and Sandros Salute MW have an exciting road ahead – certainly one that’s more thrilling than the Nullarbor! EQ