This Melbourne Cup Day, it will be 30 years since Subzero, affectionately known as Subbie, won the Cup. My new book, ‘Subbie and his mate’, is in recognition of the immense goodwill that Subbie and his mate, Graham Salisbury, achieved together. 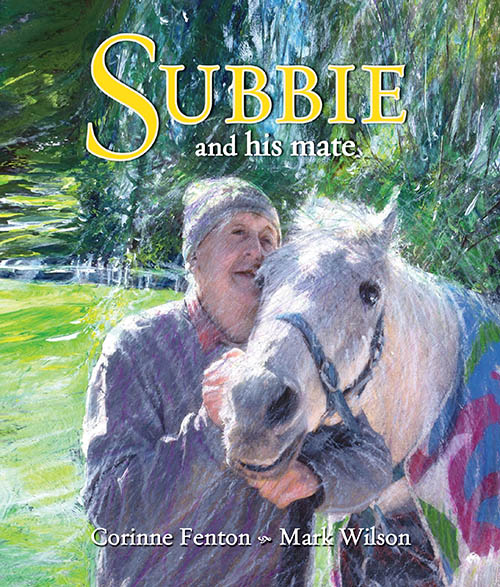 'Subbie and his mate' is a new children's book by Corinne Fenton and illustrated by Mark Wilson.
Click here to learn more about Racing Victoria's Off the Track program and initiatives.

In writing true stories, I’ve often penned about animals I have come to love – Queenie the elephant, Lady, from The Dog on the Tuckerbox, Tertius the gibbon ape, Bob the Railway Dog, Trim – Matthew Flinders’ faithful cat, and Lennie’s pony – Ginger Mick, from To The Bridge.

I’ve met wonderful people like Queenie’s keeper’s grand-daughter; Ed Cooper, who only once met his father’s precious Tertius; and Beryl Ferrier, the little sister of Lennie Gwyther. But this story was different. With this story, I met, knew and loved both Subbie and Graham Salisbury, which made it so much harder. Although I read a couple of earlier versions to Graham, and to Subbie, in his favourite paddock, I was still writing when Graham passed away, and 10 weeks later when Subbie joined him. So, I struggled with those words and how to end their story.

Subbie and his mate was one of those stories I just had to write and it’s probably been my biggest challenge. I’d been keeping my eye on Subbie’s health on and off for a few years. He was having all sorts of struggles – colic, kidney failure and peritonitis, and I wanted to wait until he was well before I proceeded. I knew that Graham was also having big health battles.

On 13 August 2019, I looked up “Salisbury” in the White Pages and rang Graham, asking him if anyone else had enquired about writing a picture book about his beloved horse. The answer was no. I had the privilege of meeting Graham and Subbie a week later. Graham talked, I listened and Subbie listened too.

After that first visit, Graham had an interview on Radio RSN, the racing station, which I tuned to on the way back to Melbourne. I nearly had a fit when I heard Graham saying on air: “It’s so exciting, we’ll do anything to help out the kids, so we are really thrilled that someone would want to do a children’s book on him. A nice lady got in touch with us about doing a book for kids and came up to see us to meet him and get it started.” At this point, I’d done little research, had not written one word, and didn’t have a publisher or an illustrator in mind.

On my second visit Graham talked, I listened and Subbie listened too. I read them draft No. 4 while I fed Subbie carrots. I treasure that draft, which has faded carrot juice dribbled over it.

I kept researching, writing, and working out the best way to write their story, changing structure and points of view over 27 drafts and rewrites. I’d planned to visit schools and the children’s hospice with them both in January 2020, imagining Subbie’s float pulling up in front of my house. But then came Covid, and I had to be content with regular phone conversations with Graham, checking information and grasping important details about this man and his treasured horse. Graham often said: “I hope I go before him. I know I couldn’t live without him.” 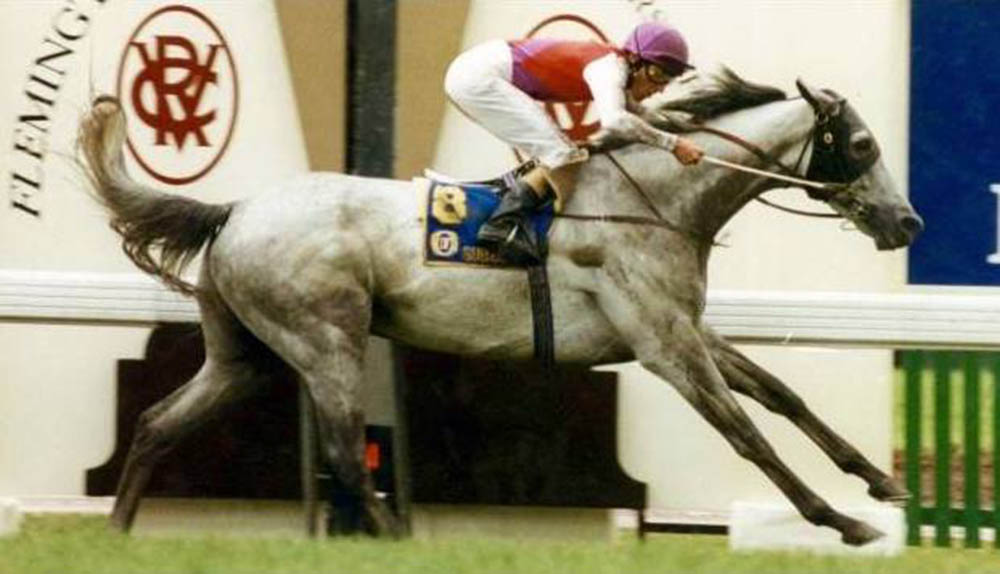 I happened to ring one Saturday afternoon in the middle of winter 2020 and learned Graham was in hospital. Graham passed away later that afternoon. I watched Graham’s funeral, like so many others, on Zoom. Subbie was there – watching and waiting. It was heartbreaking. Ten weeks later, on a Saturday, at exactly the same time, Subbie joined his best mate.

There are many stories of the close bond shared between humans and animals. Subbie and Graham’s is a modern-day one, a true love story. The book, Subbie and his mate, is one way Subbie and Graham will be remembered forever – and for those who never had the privilege of meeting them, a way to get to know them. They rubbed shoulders with stars of stage and screen, prime ministers and sports stars, yet they remained true to themselves – for Subbie and Graham, it was all in a day’s work. 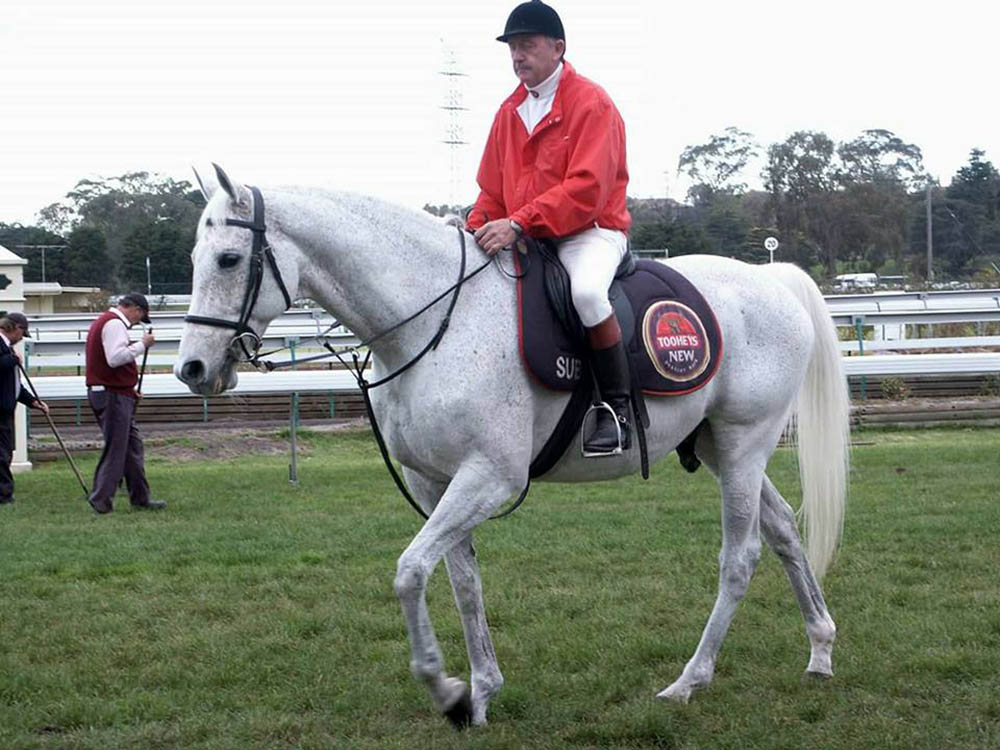 Subbie and Graham during their Clerk of the Course days. 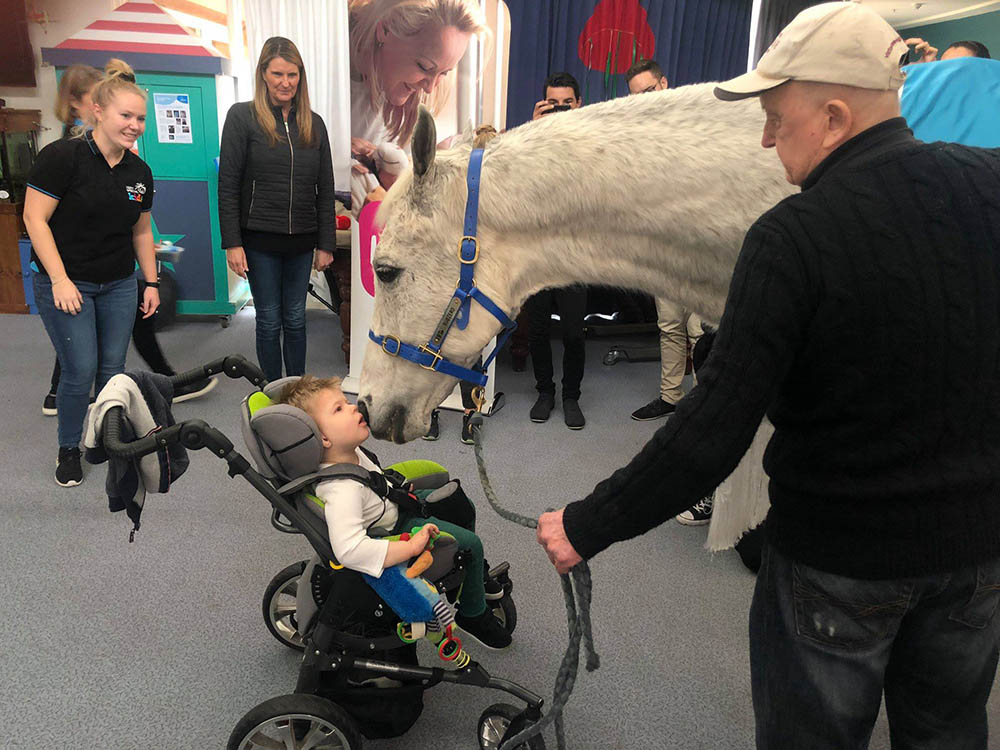 My greatest wish with this book is for the world to know what this horse and this man did, to know of the joy and happiness, the smiles they brought to the faces of the young, and not so young, those sick kids they gifted special moments to, to carry with them forever. So many who knew them say there has never been a greater bond between a man and his horse. They touched the hearts and minds of thousands of school students, sick children in hospitals and the elderly in nursing homes, as well as tens of thousands of racegoers.

The book shows us the importance of love, kindness, trust and the bond of a special friendship – against a backdrop of horse racing and a Melbourne Cup win – but Subbie and his mate is much more than that. It’s the story of how a Melbourne Cup winner went on to win hearts the world over – on and off the racetrack. This story shows children the importance of friendship, love and trust. Subbie even had his own Working with Children card.

This coming Melbourne Cup Day, it will be 30 years since a big dappled grey galloped across the finish line and won the 1992 Melbourne Cup. (The Subzero Handicap – the race of the greys – will also be run this 2022 Cup Day, as always, on the first Tuesday in November.) Not long ago I stood looking down the home straight at Flemington and imagined what it was like, on a wet and rainy afternoon, when Subbie streaked home to win. I met a woman recently who was at that Cup Day with her dad. The moment the rain began her dad gave her a $50 note and said, “Go and put that on Subzero to win”. 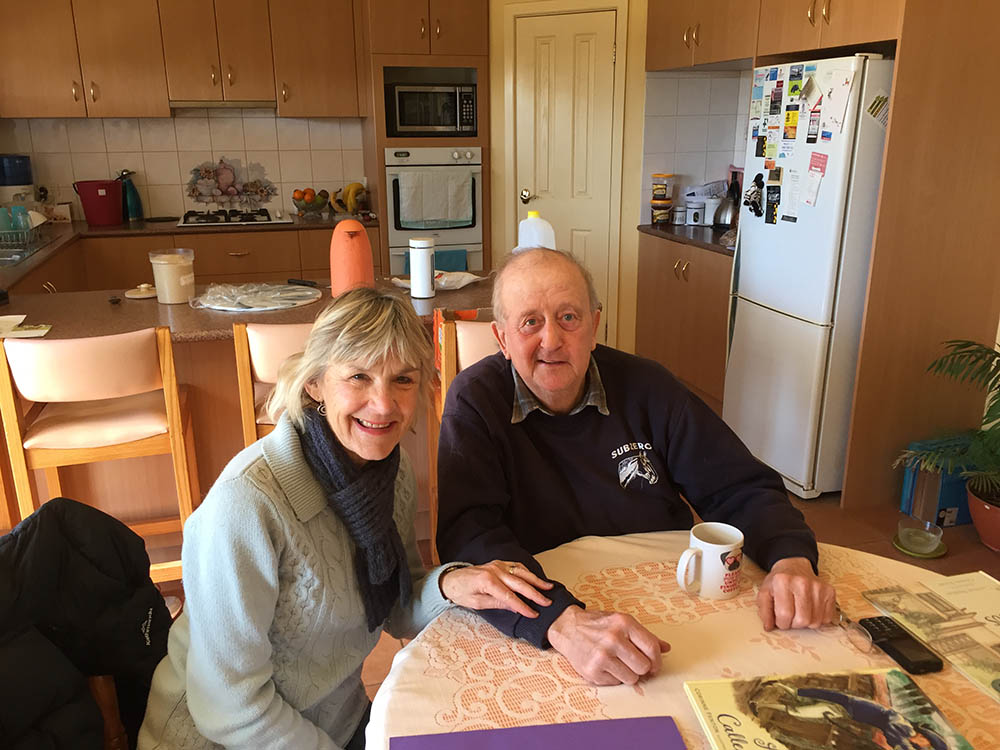 Corinne's first visit to Graham and Subbie in 2019.

There are stories everywhere about Subbie and Graham, and wonderful memories of when people met them, like the young country schoolboy who Graham noticed had shoes falling off his feet. Graham gave his teacher money to buy a new pair of shoes during her lunch break, the shoes were a gift from Subbie.

If I could just leave you with a few words from the book: “Every morning Subbie would wait at the gate for Graham, and every morning they would talk. Subbie’s eyes watched Graham wherever he went and, whenever he could, he followed.” 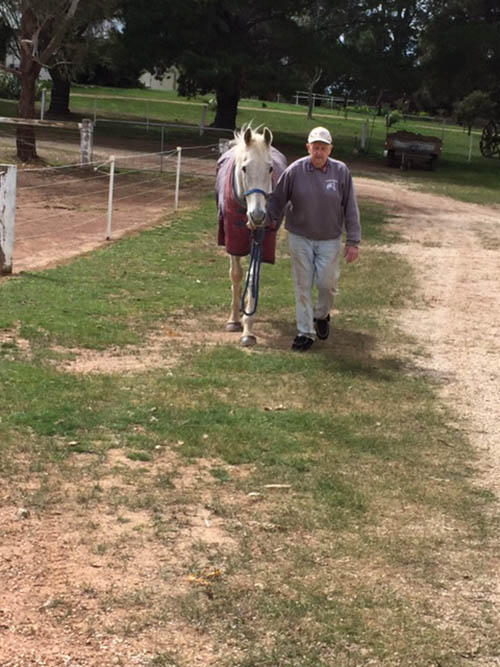 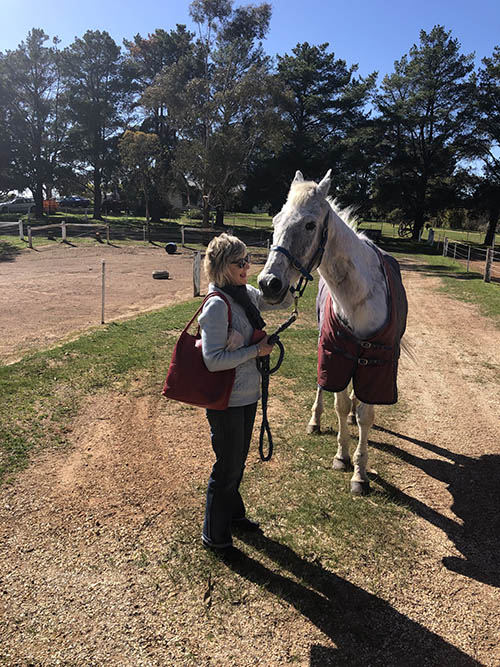 Meeting Subbie for the first time. 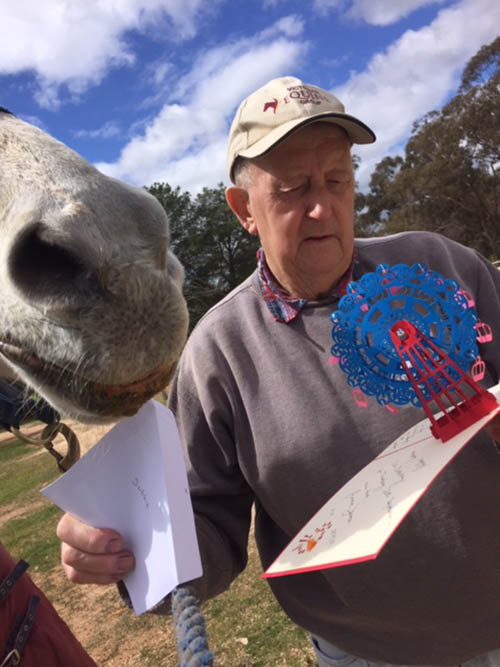 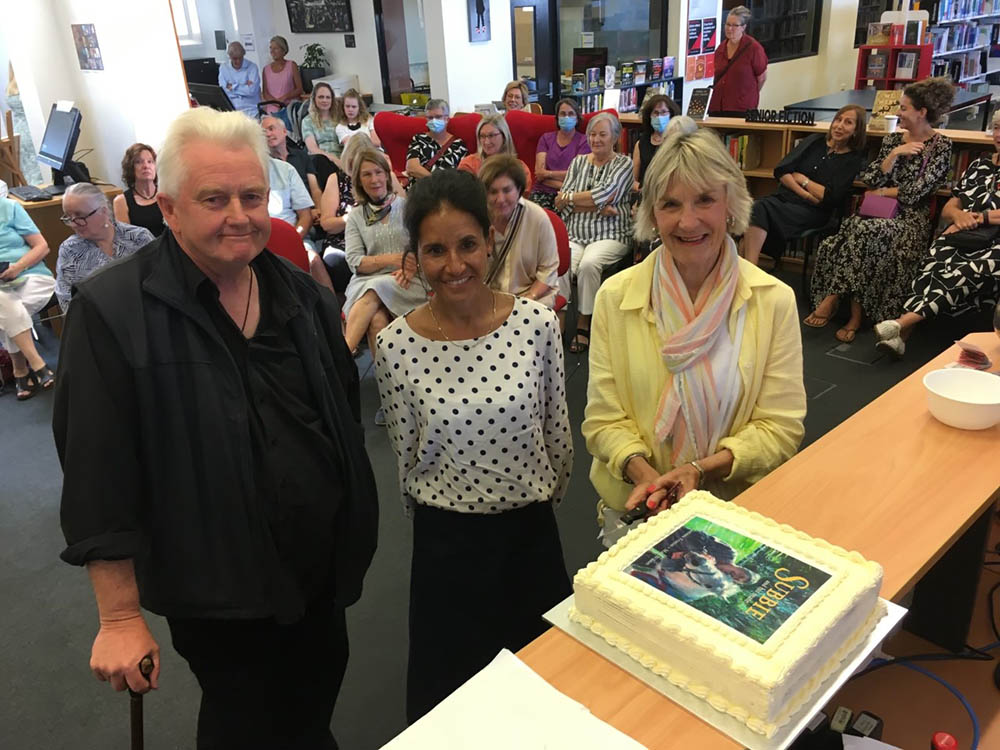 Mark Wilson, the book's illustrator, Dr Sarah Jalim, and author Corinne Fenton at the launch of 'Subbie and his mate'.

Mark Wilson used a lot of photos of Subbie for each illustration, including photos I took of Subbie at his home. Mark watched films of Subbie to study how he walked, bowed and galloped, particularly how Subbie and Graham interacted. He sketched from these photos and films, finding different angles, never directly copying, but using them to make sure that all the detail in the illustrations was as realistic as possible – for instance, Subbie’s long thin nose.

“I love drawing and painting horses,” says Mark. “Always have. My first job was looking after a beautiful old draught horse called Bessie for the Dutch Bakery in Sale, Victoria, where I grew up. At 4am every Saturday and Sunday, in the dark, and the frost of winter, I rode old Bessie from her paddock, through the darkened streets to the bakery. Then I fed her, brushed her down and fitted her harness to the bakery wagon. We then loaded loaves of bread and delivered them to the verandahs of hundreds of houses in Sale.

“Bessie didn’t need guiding through the streets. She would stroll along as we hopped on and off the back of the cart delivering loaves of bread. Sometimes, if we were slow, she would wait for us before rounding a corner or crossing a street. When we finished, I looked after her again and rode her back to her paddock near Lake Guthridge in Sale.

“When Corinne asked me to illustrate Subbie, I jumped at the chance. All the old memories of Bessie came flooding back as I did the drawings and paintings for the book about Subbie. I think I transferred the emotions I felt all those years ago to Subbie, a beautiful horse with just the same gentle nature as old Bessie. Old Bessie is gone now, and Subbie too, but I say a silent thank you to Corinne every day for re-kindling those emotions, because Subbie and his mate is not only my little tribute to Subbie, but also old Bessie, and a slower, gentler way of life that is all but gone.”

Corinne Fenton is an award-winning children’s author who has established a reputation for writing beautiful picture-book histories of animals whose lives have become legendary.

Her titles Little Dog and the Christmas Wish and One Christmas Eve were chosen as themes for the Myer Christmas windows. EQ

Subbie and his mate, by Corinne Fenton and illustrated by Mark Wilson. Published by Ford Street Publishing, 2022. $24.95 available in all good bookshops.