The New Forest National Park in Hampshire England, is anything but “new” — there have been New Forest Ponies there since the Ice Age! 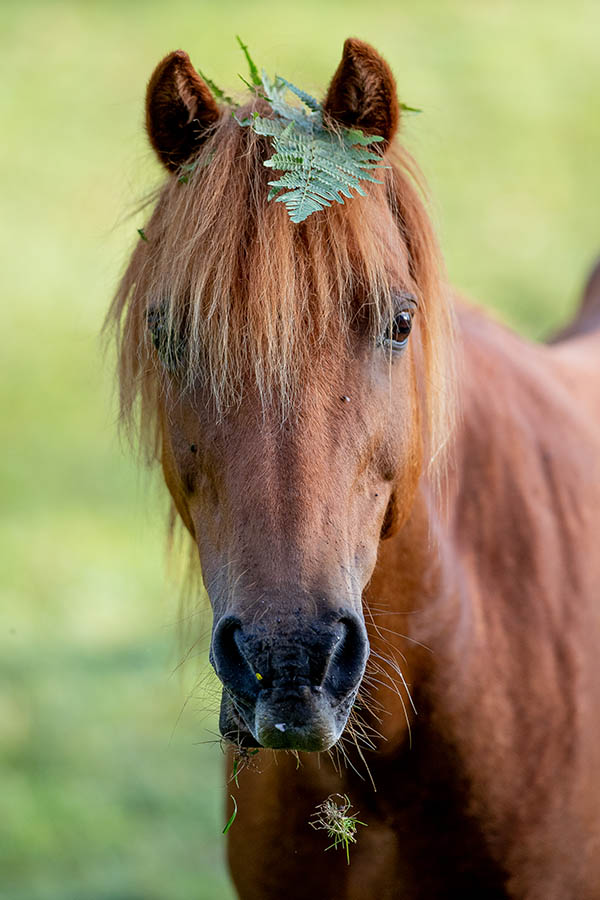 The New Forest really is one of nature’s masterpieces. Located in southern England, the nearest town is the Port of Southampton. It was first declared the New Forest in the days of William the Conqueror around the year 1079 and was recorded in the Domesday Book in 1086.

Arriving in the New Forest shortly after dawn on a beautiful English summer’s day is something that everyone should experience. The first indication that I was entering a timeless land was the sound of the car rumbling over a cattle grid, heralding my arrival into this pony populated province, where the animals of the forest have priority over other road users. “Beware of Wild Horses” road signs remind motorists to be alert to four-legged road users, often with questionable road sense!

It really is like stepping into a seemingly magical land, comprising breathtaking views over wetlands, woodland, pasture and heathland that support myriad flora and fauna. Within minutes of my arrival, I happened upon a small group of bracken-bedecked ponies and foals enjoying the sun in a small clearing not far from the road. The ponies spend up to 80% of their time foraging for food and are often described as the “architects of the forest” along with the free-ranging cattle and donkeys with whom they share their rich environment. Without the constant grazing of these animals, the forest would soon become overgrown with dense vegetation.

The New Forest comprises of 71,500 acres (310 sq km), boasting some wonderfully named villages and areas, such as Nomansland, Slap Bottom, Sandy Balls, Pig Bush, Horseshoe Bottom, Slop Bog and Lover! The soil is predominantly of poor quality and therefore not suitable for growing crops, but perfect for grazing animals. The local inhabitants known as “Commoners” have had rights for hundreds of years to turn out their horses, donkeys and cattle to graze the land, and continue to do so to this day. Each pony that they own must be marked and registered and an annual fee paid. The ponies display their owner’s individual brand and also have their tails cut in one of four distinct styles, to indicate that their owner has paid the yearly grazing fee. Many of the ponies now sport a reflective collar to lessen the chances of road traffic collisions.

Of the 16 native breeds in the United Kingdom, the New Forest Pony presents in many different colours. Remarkably, their heritage includes a number of different breeds including Arab, Thoroughbred, Hackney and other native breeds such as Welsh, Dales, Fell, Highland, Dartmoor and Exmoor. As a result, the colours of the ponies vary tremendously but the most common are bay, grey and chestnut. They are allowed white markings on the head and legs. I saw just about every colour of pony that could be imagined and even a few that are not recognised by the New Forest Breeding Society! Although flourishing, the New Forest Pony is still on the Rare Breed Survival Trusts watch list for 2021. 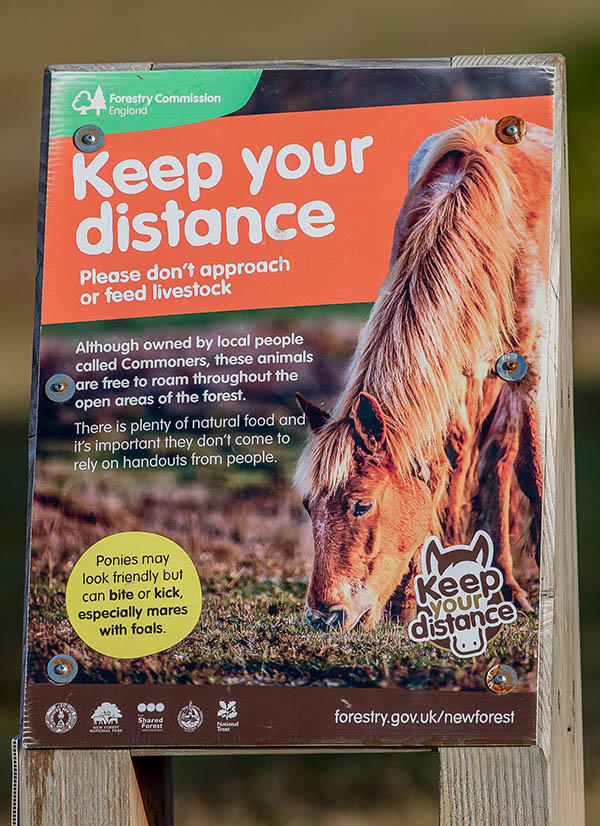 Visitors are warned to keep their distance and refrain from feeding the ponies. © Boots and Hooves / Elli Birch 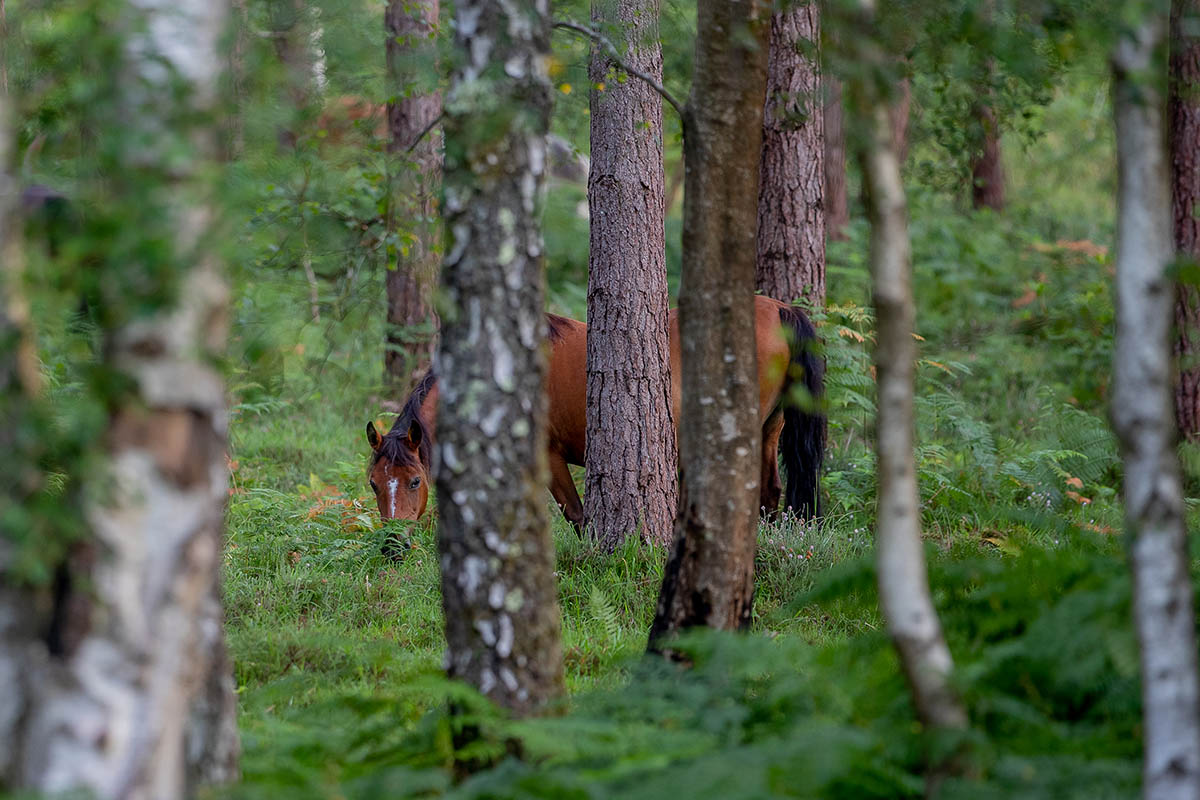 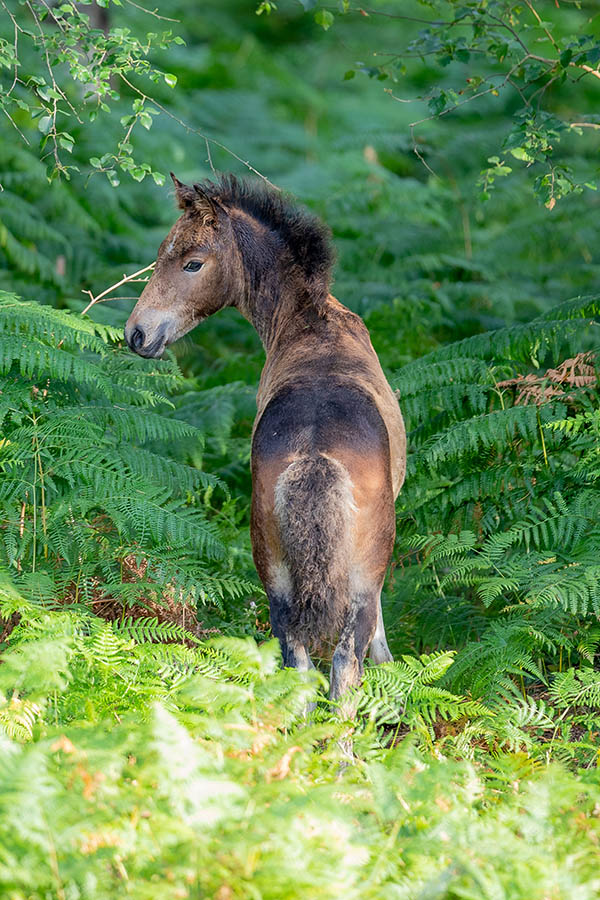 The ponies spend up to 80% of their time foraging for food and are often described as the “architects of the forest”. © Boots and Hooves / Elli Birch

The New Forest has its own system in place to manage and monitor the land and animals; it is quite complex and is steeped in ancient tradition. Verderer, Agister and Commoner are titles given to those people who not only own the animals, but also regulate “commoning” (the right to graze livestock) and work in conjunction with the New Forest Rangers who are the first point of contact for visitors to the forest. There are approximately 700 Commoners who utilise this right and there is no limit to the number of animals they can own; there are in the region of 5000 ponies roaming the forest.

It is the agisters who supervise the animals on a day-to-day basis and conduct round-ups known as “drifts”. About 40 drifts take place every year between August and November in different locations around the forest. The drifts are used for the purposes of health checks, as well as confirming that a pony’s owner has paid the yearly grazing fee. Verderers undertake administrative control of the forest and the forest stallions that are involved in a strictly controlled breeding system. The carefully selected stallions only run free for a six-week period during May and June. An intriguing New Forest Pony claim to fame can be traced back to 1764; a diminutive Thoroughbred stallion named Marske was turned out into the forest for four breeding seasons and was the sire of the legendary racehorse Eclipse, unbeaten in 18 races and still revered to this day.

It is a common myth that the ponies are wild. They are only wild in as much as they roam freely throughout the countryside, towns and villages that make up the New Forest. In general, the ponies tend to keep to their own territories, their exact location varying depending on the time of year. In the summer they are invariably found together with other ponies in their favourite spot, areas are known as “shades”, which strangely are often not in a shaded area. 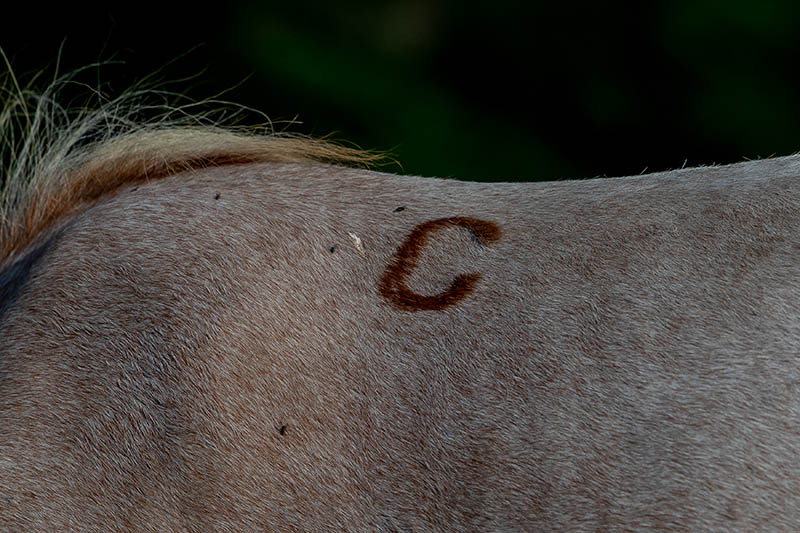 The ponies are owned by Commoners and display their owners' individual brands. © Boots and Hooves / Elli Birch 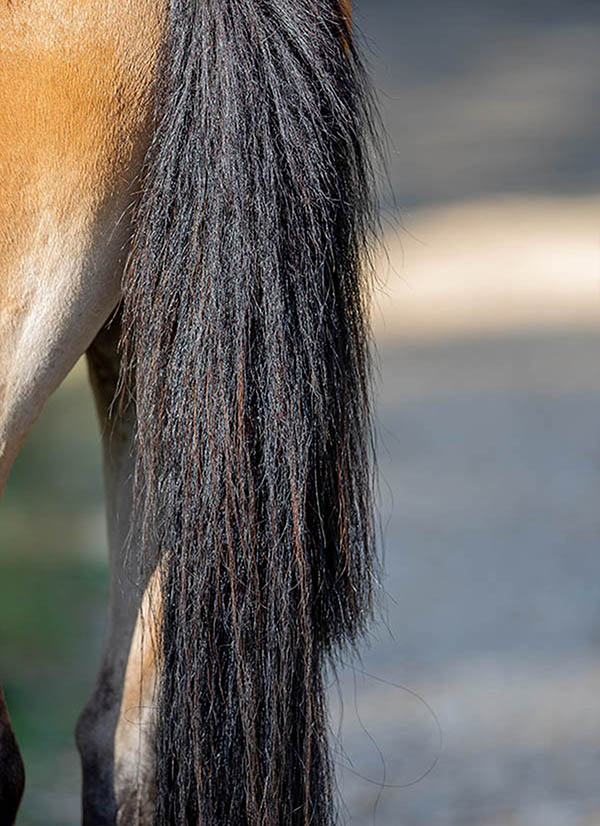 The ponies have their tails cut in one of four distinct styles, to indicate that their owner has paid the yearly grazing fee. © Boots and Hooves / Elli Birch 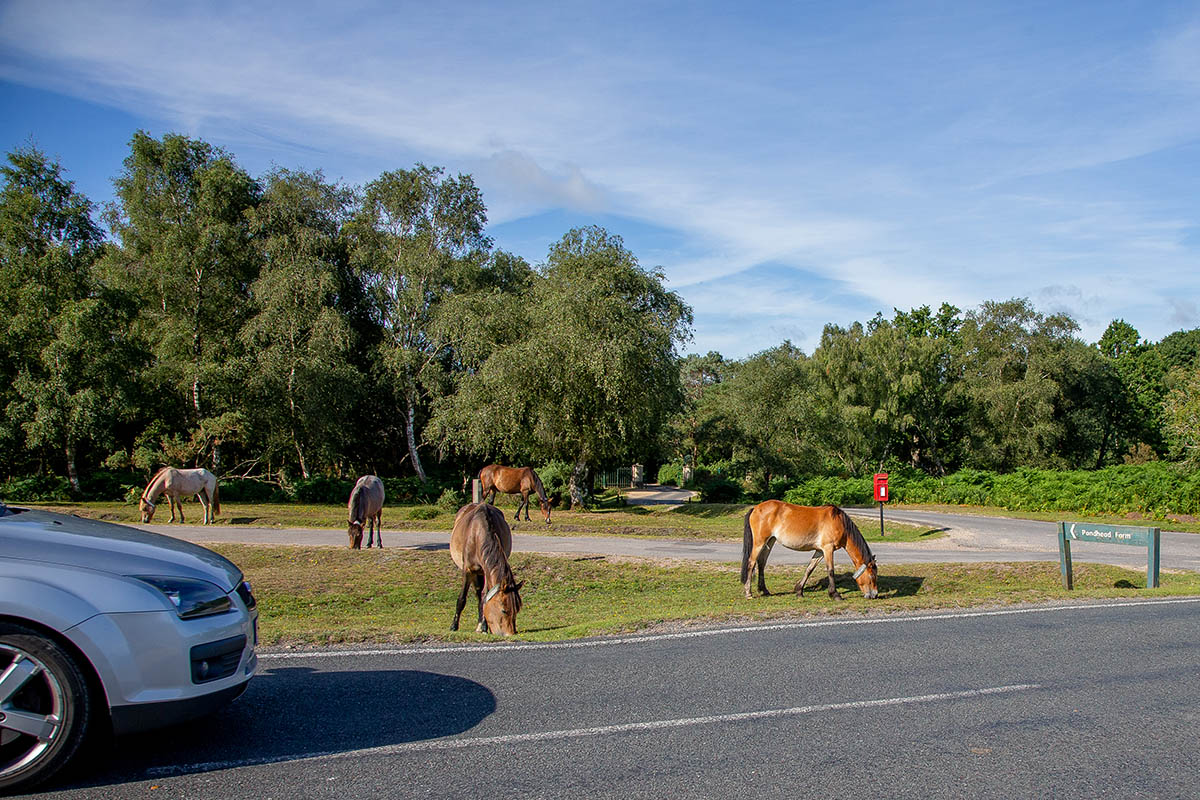 Road users must be alert at all times as the ponies graze along the roadside. © Boots and Hooves / Elli Birch 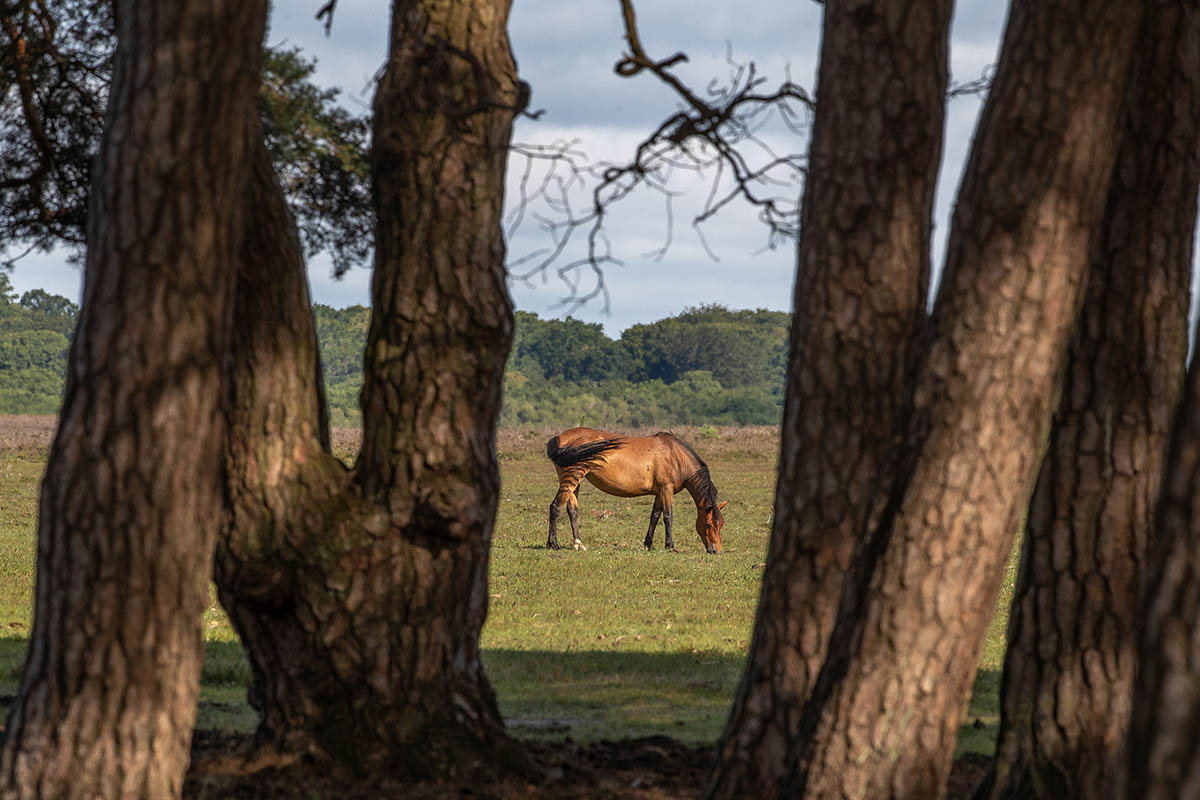 It is a common myth that the ponies are wild; the ponies are only wild in as much as they roam freely throughout the countryside. © Boots and Hooves / Elli Birch 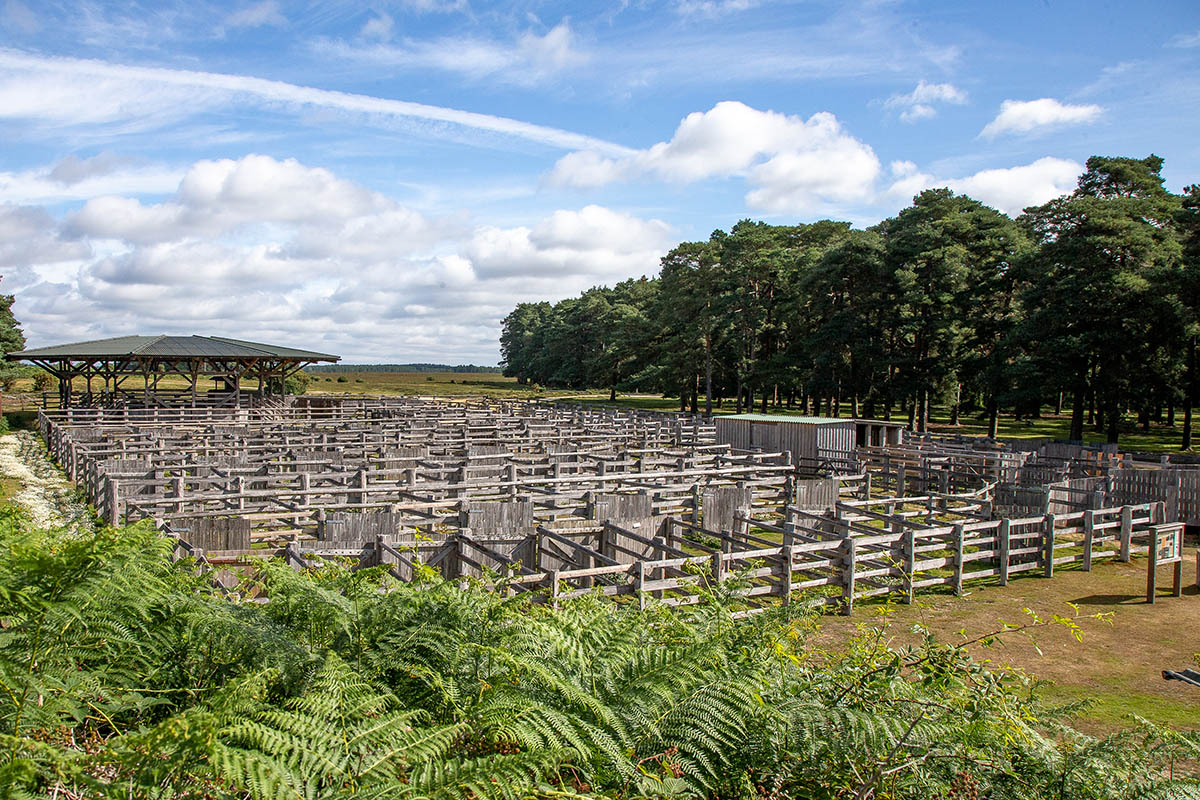 The Beaulieu Pony Sale is held four times per year at the saleyards. © Boots and Hooves / Elli Birch

“Without the constant grazing
of these animals, the forest would
soon become overgrown.”

Four times a year there is the opportunity to purchase one of these hardy, good tempered, straightforward and often pretty ponies at the Beaulieu Pony Sale. A corral on a ranch immediately springs to mind when the saleyard is first seen, consisting of many viewing pens and a large, covered sales ring. Even on a non-trading day it was not hard to imagine the hustle, bustle, anticipation and excitement involved on sale days. Ponies and foals are sold at auction, in lots, in front of a packed house, where the currency used is guineas rather than pounds (1 guinea = £1.05).

Navigating around the forest is easy, with plenty of places to park and then set off on foot to explore the hidden glades, streams and shades that are home to the ponies, donkeys and cattle. A trip to the New Forest is not complete without a picnic, a visit to a pub or perhaps afternoon tea in one of the quaint tea rooms. The four-legged locals are not silly and are often to be found in the vicinity of these watering holes, preying on the unsuspecting picnic-touting, pint-drinking, cream cake-scoffing tourists! (Although there is a substantial fine for anyone caught feeding the ponies).

There are in the region of 5000 ponies roaming the forest. © Boots and Hooves / Elli Birch 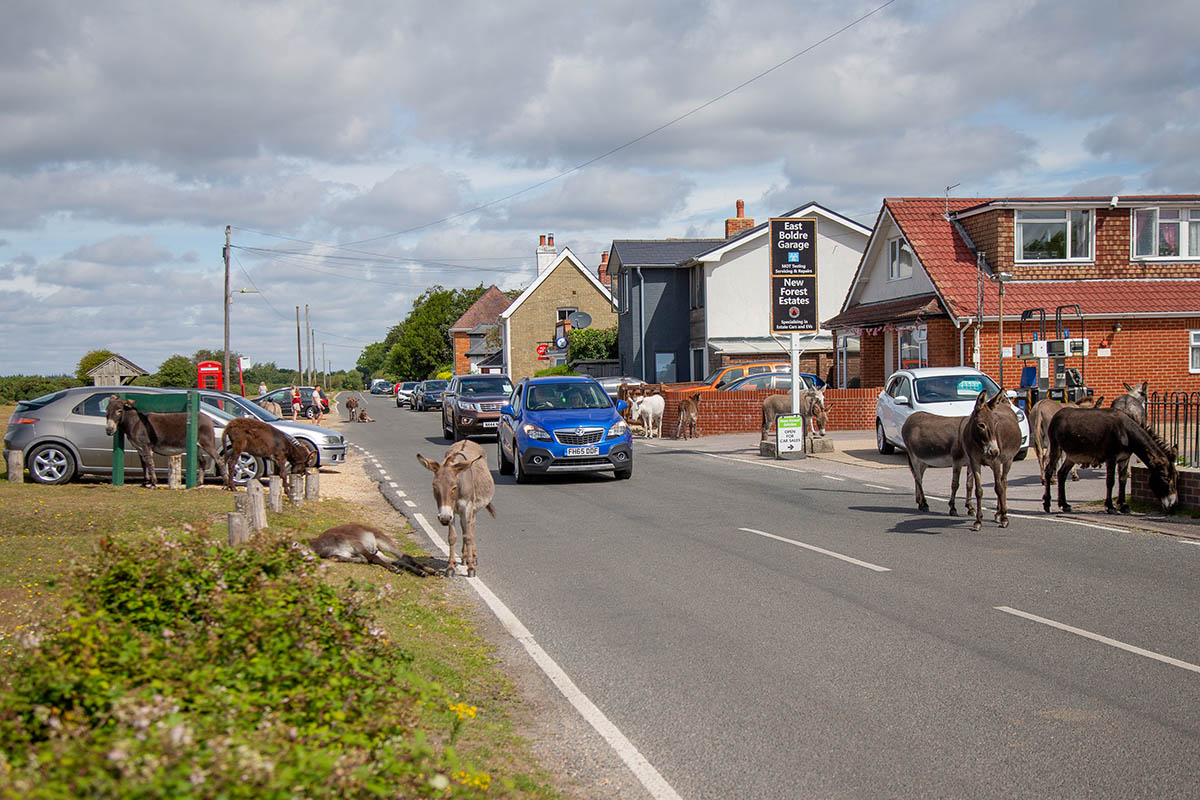 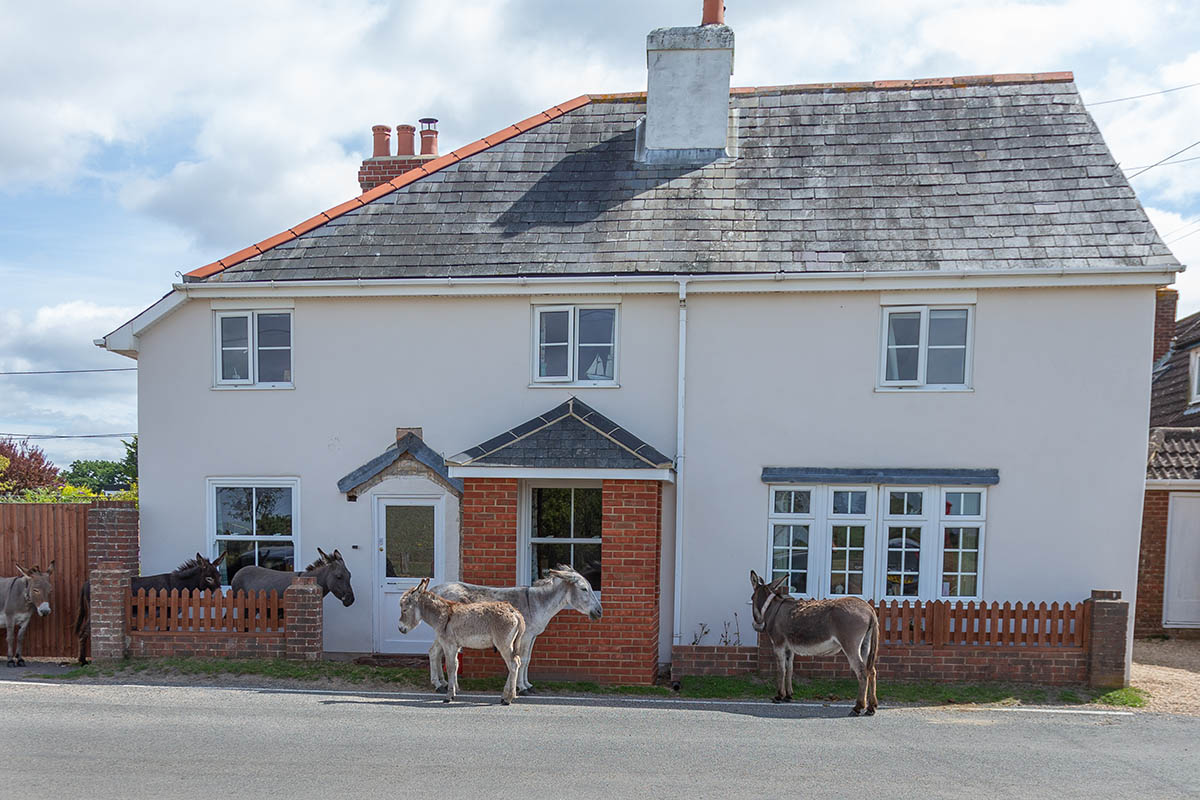 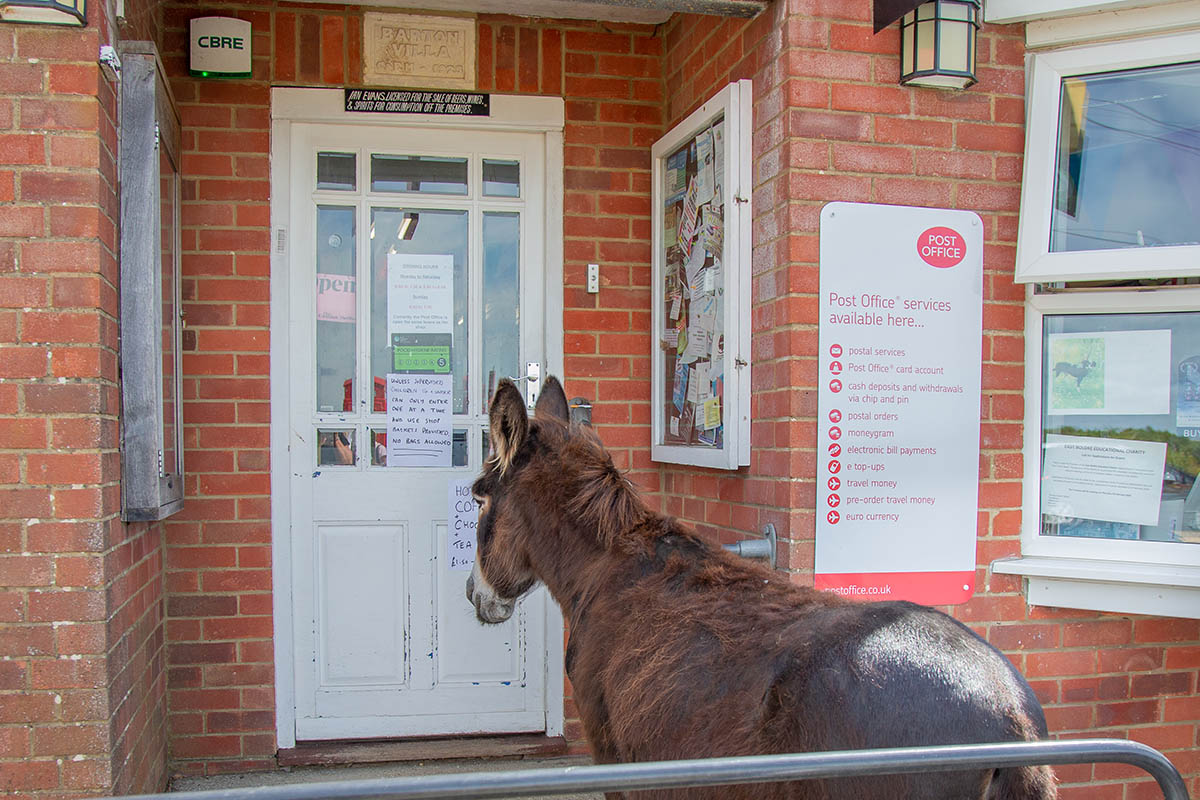 A donkey waits by the post office door in East Boldre. © Boots and Hooves / Elli Birch 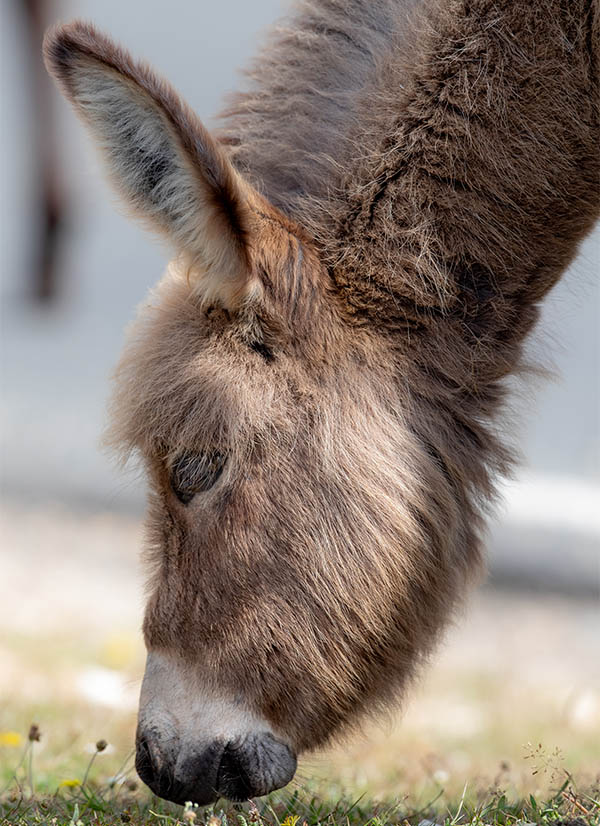 “I was thrilled to be confronted
with more donkeys and
ponies than I could count.”

My New Forest drive took me through the little village of East Boldre and, upon rounding a corner, I was thrilled to be confronted with more donkeys and ponies than I could count, wandering along the road and verges. The Turf Cutter Arms pub played host to a dozen ponies snoozing in the car park, whilst some socially distancing donkeys queued outside the village shop and others loitered in front gardens, on the garage forecourt and even at a bus stop! I am delighted to now refer to East Boldre as Donkey Town. Although some of the locals said their presence did wear thin on occasion, especially when awakened by the distinctive hee-haw braying at an obscenely early hour of the morning or when they helped themselves to someone’s prizewinning dahlias!

As I drive away, after the sun has set over some of the most magnificent scenery that the UK has to offer, I catch a glimpse of a reflective collar, as one of these wonderful ponies disappears into the night. EQ

The joy of growing up with a Brumby (By Amanda Young)