WITH AMANDA ROSS
content placeholder
Alena Duncan at Pony Club with Brumby Coolie when she was younger.
Previous
Next

Brumbies are proving to be ideal first horses for country kids starting out at Pony Club. Once broken in, their inherent good nature, size and loyalty make them safe and economical mounts for beginners. 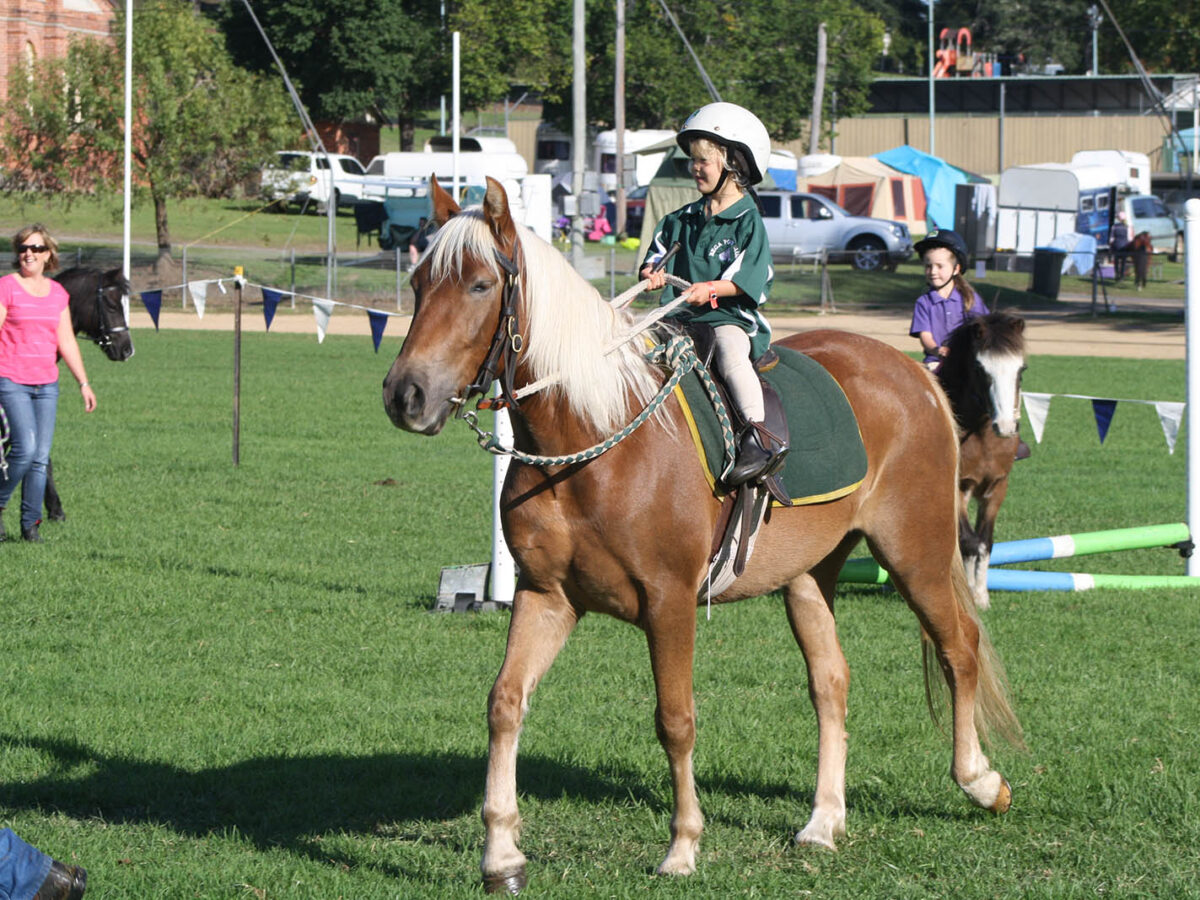 Alena Duncan at Pony Club with Brumby Coolie when she was younger.
Click here to learn more about Racing Victoria's Off the Track program and initiatives

“It cost her grandmother
a dozen eggs for a
horse for her!”

Brumbies are not native to Australia, and they are considered by some to be a destructive feral species. However, the Brumby’s place in Australian folklore and social history is indisputable. Immortalised in artwork, poems, songs, and Elyne Mitchell’s Silver Brumby books, the Brumby also has ancestral ties to horses that served in the Boer War and both World Wars.

Brumbies descend from escaped, imported horses dating back to early European settlement. The Brumby’s ancestors, a range of breeds including Arabians, Thoroughbreds and Draught horses, were resilient animals, tough enough to survive the long and treacherous sea voyage to Australia. They quickly adapted to the harsh Australian climate and conditions and the wild horse population grew. Today, wild brumbies can be found in every Australian state and territory except Tasmania.

The management of Brumbies, and their place in the Australian environment, is a controversial topic that polarises public and political opinion. As discussions focus on whether Brumby populations should be reduced through culling, sterilisation or removal and rehoming, the question arises: If removed from the environment they have adapted to, what kind of future would a Brumby best suit?

The process of trapping and retraining Brumbies is not new – it’s a practice some savvy Australian horsemen and women have undertaken for generations. Many Brumbies have successfully adapted to domesticated lives as ridden horses, working horses and even pets, however, one avenue in particular where Brumbies have excelled is as trustworthy Pony Club mounts!

It’s a topic that Sue-Ann “Suzzie” Bramich, from Tumbarumba, a small town on the western edge of the NSW Snowy Mountains, is passionate about. Suzzie acquired her first Brumby when she was about 12 years old, and whilst by her own admission she’s “a long way from 12” now, her involvement with Brumbies has never ceased. As the Senior Instructor at Tumbarumba Pony Club, and proud grandmother of two young Brumby enthusiasts, Deon and Tanisha, her belief in their value as safe and versatile Pony Club mounts only strengthens.

“They’ve just got a certain nature about them, they look after the kids and they’re not flighty. Once they’re broken in, they’re there for the child. And they’re not worried about what’s running around them or what’s going on, they’re just concentrating on what they are doing. You can send the kids down the paddock and you don’t have to have any worries out in the bush. They’re good companions for kids,” Suzzie testifies.

As Brumbies are generally in the 13hh to 14.2hh size range, they’re a great height for most children and seem to settle in to Pony Club very quickly once broken in. “They’re broken in, you get them back, and then you just take them to Pony Club!” Suzzie explains. “And they’re low maintenance, particularly with their feet.”

For as long as Suzzie can remember, there have always been at least two or three Brumbies at every Tumbarumba Pony Club rally. She recalls with particular fondness her friend Geraldine’s first encounter with a Brumby. “Geraldine’s grandmother came across a bloke walking along with a mare, and she was heavy in foal. Of course, Geraldine needed a horse and in those days no one had a lot of money around here. So she walked out with a dozen eggs and give him a dozen eggs, and he gave her the mare! That mare ended up having Trigger, the horse Geraldine brought to the Pony Club. It cost her grandmother a dozen eggs for a horse for her!” 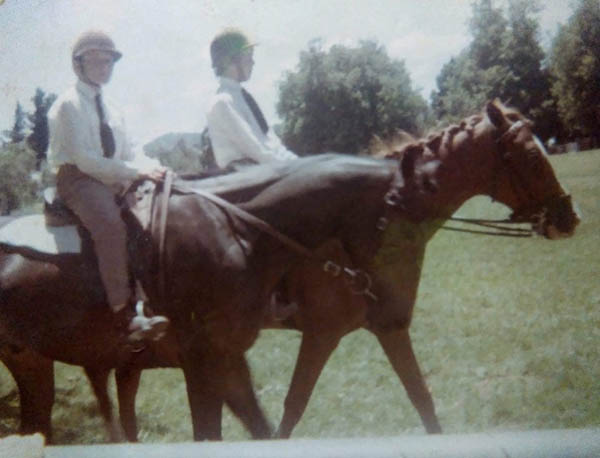 Suzzie and her friend on their brumbies growing up. 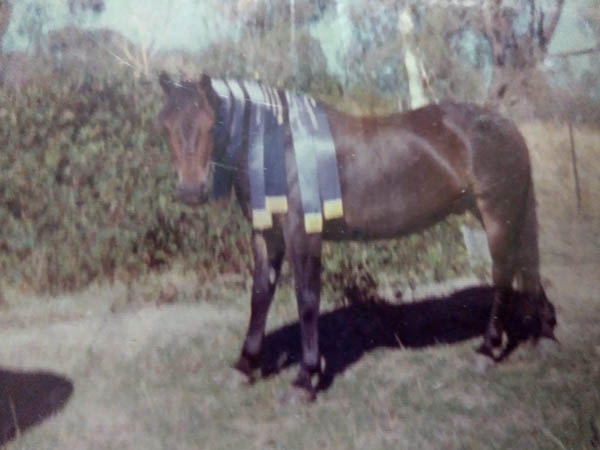 The brumby that was bought for 12 eggs! 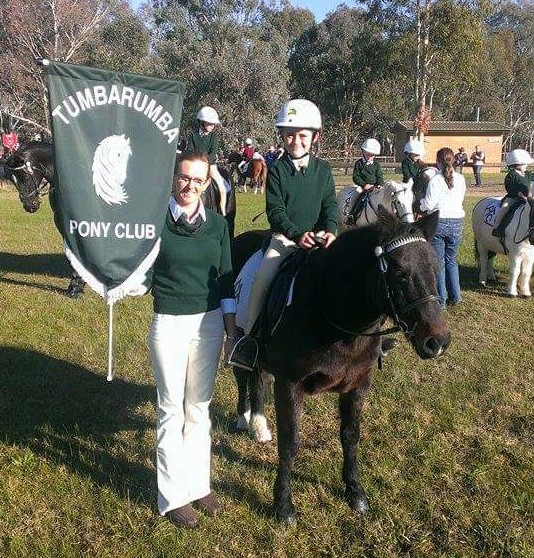 Lady the Brumby flying the flag for Tumbarumba PC.

“They’ve just got a certain
nature about them.”

A dozen eggs may not be enough to secure a Brumby that’s broken in and ready to take to Pony Club these days, but brumbies continue to be an affordable and highly suitable option for many families. “It would be such a shame to see them culled as they are a cheap horse for people that can’t go out and buy these big-time horses,” says Suzzie. “Without Brumbies there would be a lot of kids up here in the mountains and on farms that won’t have a horse. They won’t be able to afford the $7,000, $8,000, $20,000 horse!”

Suzzie cautions that, as with all horses, it’s important that anyone thinking of taking on a wild Brumby either has suitable experience or is surrounded by people who do. It’s rare for green horses and green riders to be a perfect match, however, there are exceptions to every rule and sometimes it’s the partnerships between young riders and young horses that flourish with the appropriate guidance.

This was certainly the case for the Duncan family of Bega, NSW, who are members of Cobargo Pony Club. Their youngest daughter Alena’s first pony, Coolie, was a Kiandra Brumby from the Cooleman Plain – and both horse and child were around three years old when their paths first crossed.

“It started with their dad,” Angie Duncan explains. “He was always interested in Brumbies because he used to live backing on to the Kosciuszko National Park, he spent about 40 years around them. Once the girls were old enough to start riding them and working with them, that’s when he started getting involved with starting and training.”

After Alena’s father broke in Coolie, it was not long before the young pair were attending Pony Club, and from there the family’s involvement with Brumbies continued to grow. Alena, now 10, and her sister Zali, 13, currently have around 10 Brumbies in their care at various stages of training. To date, the talented pair have started around 15 Brumbies who have then been sold on to Pony Club families. After approximately 12 months with the Duncan family, most of the Brumbies have become well suited to novice Pony Clubbers, and have become great allrounders excelling at sporting, jumping and flatwork within the Pony Club system. One has even gone on to become a very successful eventer, now competing at EA CNC1* level! 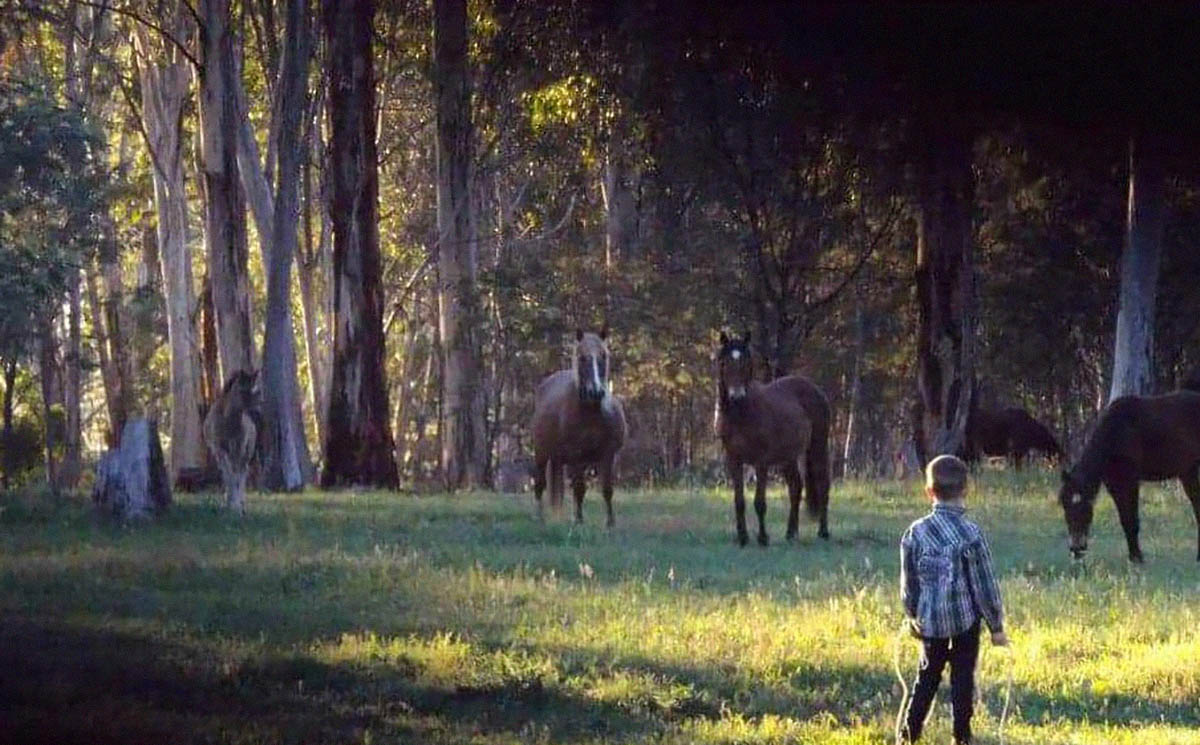 Deon watching a herd of Brumbies.

Alena with a Brumby she recently broke in. 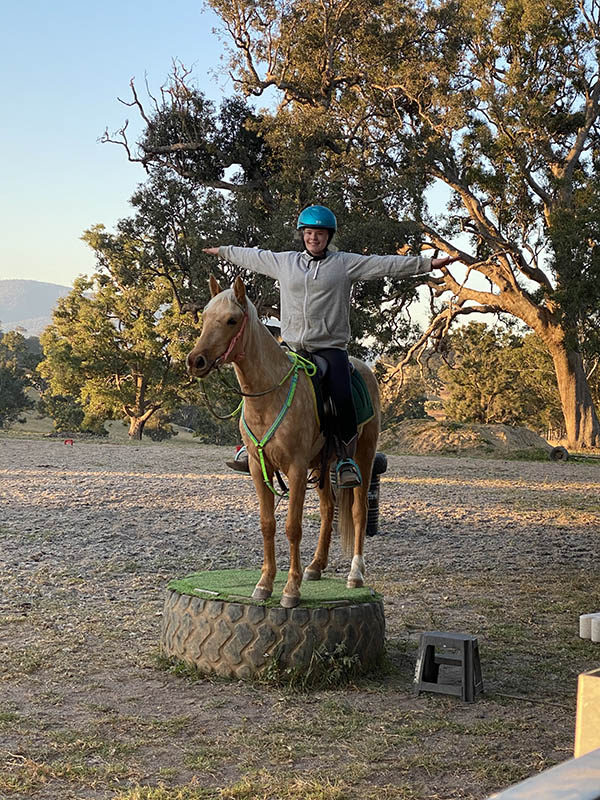 Zali Duncan on Silver the Brumby, who she has recently broken in. 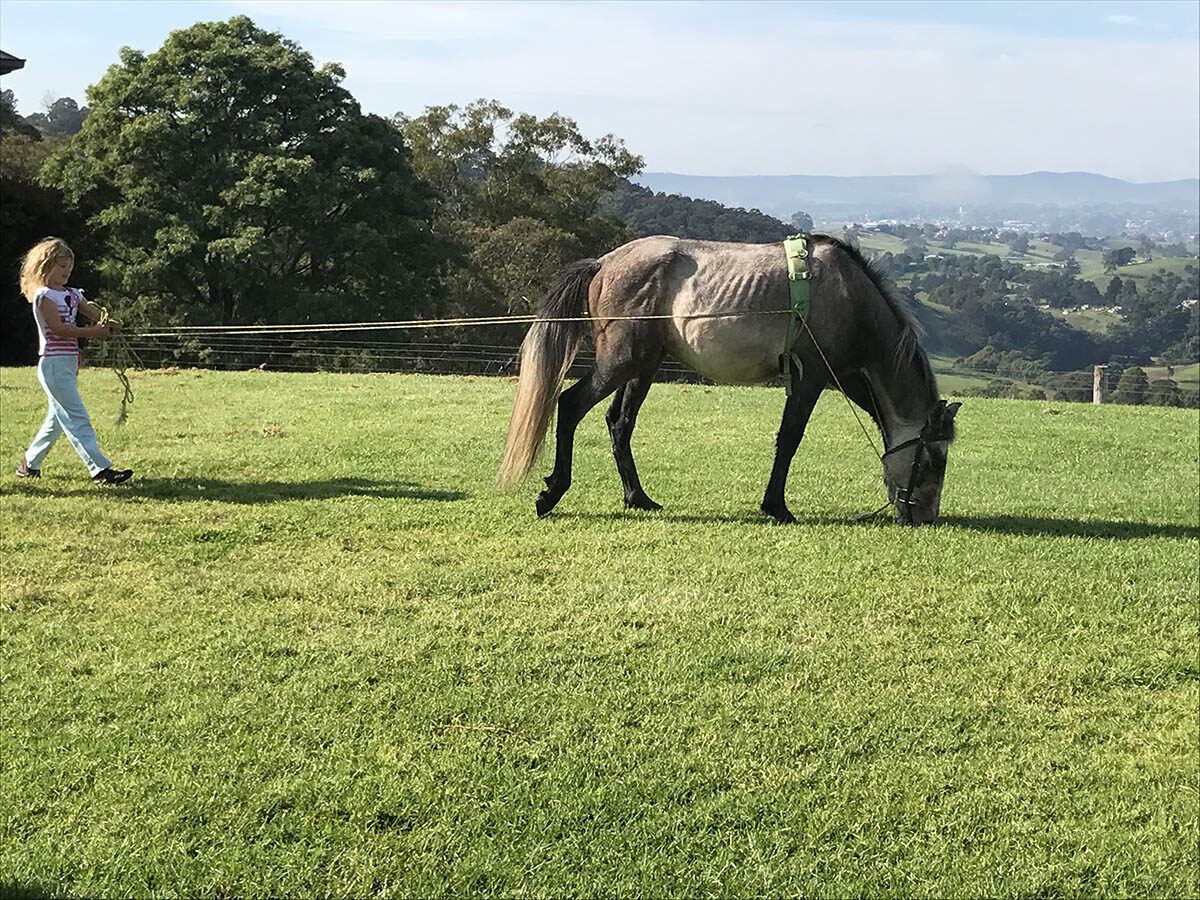 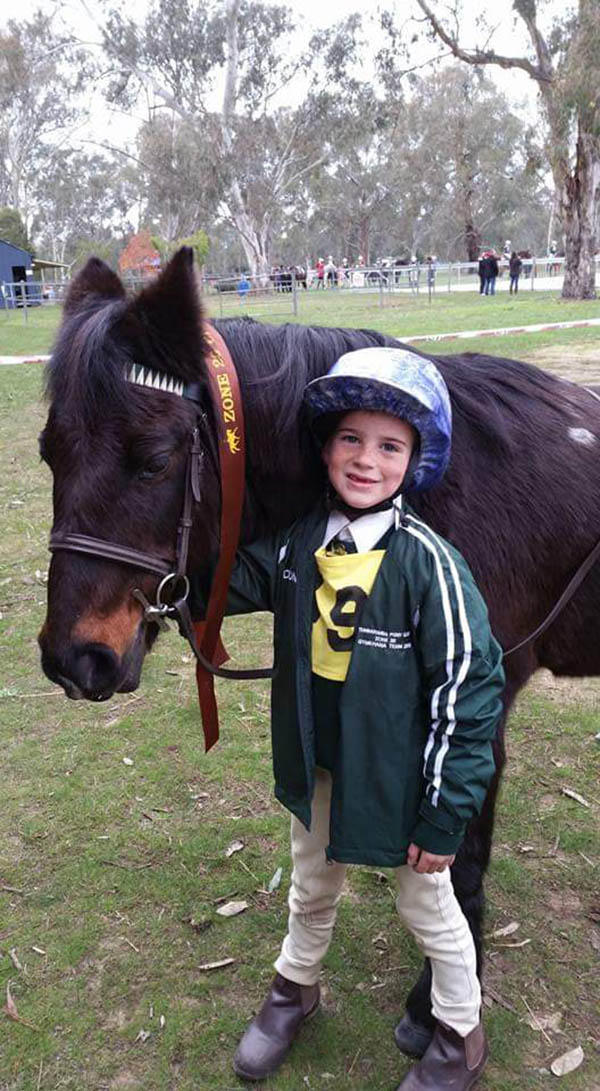 “Some of them we’ve got from friends that rescued them from national parks,” Angie Duncan explains. “They catch them over at the depot. We’ve got some from there, and we’ve also had friends that have taken them on but then didn’t have the time or opportunity to bring them on, so they’ve come over to us because we’ve got a fair bit of space and both the girls can work with them.”

As far as the training program the Duncan family’s Brumbies go through, Angie describes it as being really no different to working with any young or green horse. “It’s not really specific to Brumbies – of course, most other horses the girls work with such as thoroughbreds and Stock Horses have been handled beforehand, but the Brumbies usually haven’t. So there’s that first section of training that involves getting them used to being near people. But other than that, the process is the same. Every horse, and therefore every Brumby, is a bit different and you adapt what you do for them, to what suits them.”

It comes as no surprise that Brumbies are a joy to take out trail riding, and both the Duncan and Bramich families enjoy riding their Brumbies through the national park. Suzzie Bramich recounts the story of a Zone 20 trail ride in the bush at McPherson Plain. “Many riders attended from the city, they loved the bush and the Brumbies, and my grandson Deon was over the moon as we encountered wild Brumbies along the way. It was his first encounter with wild Brumbies.”

There’s no doubt that the love these passionate young Brumby enthusiasts feel for Australia’s wild horses has deepened due to the positive and rewarding experiences they have enjoyed with their “brums” at Pony Club. The insights and knowledge of this emerging generation of influencers and decision-makers should help ensure that in the future, our nation finds the right balance between preserving Australia’s heritage horses and protecting our ecosytems.

“They’re reliable animals and after you break them in they are really quiet and you can basically do anything with them.” – Alena, 10.

“They are kind-natured and they do just about anything you want them to do. I don’t think I have ever been hurt by a brumby.” – Deon, 12.

“They are good-natured, they’re pretty talented and all horse lives matter.” – Zali, 13. EQ

A glimpse of nature’s masterpiece (By Elli Birch)