WITH AMANDA ROSS
content placeholder
Elizabeth Taylor as Velvet, with The Pie
Previous
Next

“Never work with children or animals” is a showbiz adage attributed to Hollywood comedian W.C. Fields. However, great horse movies and television shows have proved him wrong, as we look at two more classics in our series about horses on screen. 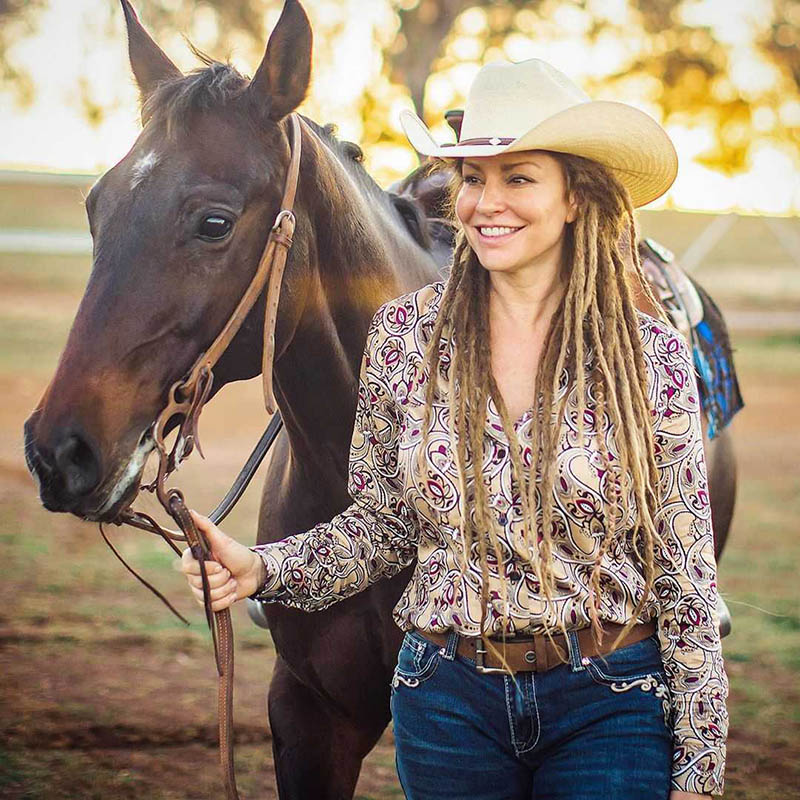 “I turned vegetarian –
I just couldn’t eat
my co-stars!”

This series following the lives of five women running a cattle station in the outback aired on Channel Nine between 2001 and 2009. It was one of the most successful shows on Australian television, garnering an average of 1.51 million viewers during its first season. And just a few months ago a survey conducted by the Media, Entertainment and Arts Alliance voted McLeod’s Daughters Australia’s favourite local show or movie during lockdown.

Horsemaster and livestock co-ordinator, Jim Willoughby, worked on every episode. “We were based on Kingsford, a property just north of Gawler in South Australia,” explains Jim, who has been working in the Australian film business for over 40 years. “This became Drover’s Run in the series. We set up a wranglers’ camp with yards and Atco huts and thought the show would at least be good for a couple of series – in fact it went for eight seasons.

“Before filming began we were lucky to have a month’s pre-production and did some really intensive riding and also livestock training. It always looks so much better if actors handle animals themselves and, of course, if they can ride a bit.

“I do appreciate that learning to ride can do an actor’s head in. Some get the hang of it but then forget what they’re supposed to say and where they’re meant to be. My role is to get actors to appear as if they know what they’re doing on a horse. If during filming they’re not looking good enough, it’s up to me to ask for another take.”

Jim recalls that Lisa Chappell rode a horse fairly well. Her character died in a car accident during season three. “I’ve died many times on screen but that particular death was the most challenging and satisfying,” Lisa recalls. Upon gaining the role of Claire McLeod, Lisa, who was to win a Logie in 2002 for Best New Female Talent, threw herself into rural life. “I lived on a property by myself and when I had time I’d watch horses being trained and go to rodeos.”

Jim was impressed with the way Lisa embraced life on the land: “Like a real rough and tumble country girl.” But what Jim didn’t know was that working with the show’s farm animals led to Lisa changing her dietary habits. “After shooting scenes with a lamb called Buddy, I turned vegetarian – I just couldn’t eat my co-stars!”

Bridie Carter, playing her on-screen half-sister, Tess McLeod, had been a timid rider when arriving on set, so she was introduced to a horse called Beau, known as Oscar in the series. “He’d been ridden by scores of actors over the years,” says Jim. “He gave them confidence and made them look good.”

Bridie developed a very close relationship with the trusty gelding. “I was broken-hearted when I learnt he had died recently. I’d dreamt of taking my sons to meet him, he really looked after me.”

Sometimes the thought of having to ride will stop an actor taking on a role; Michala Banas, who played Kate Manfredi, was petrified in the beginning. “The part involved horses, sheep, cows and dirt. I was a city girl, I knew nothing about all that stuff and had only sat on a horse twice,” says Kate. When she left the series four years later she had learned much about rural life. “I can drive a tractor and shear a sheep!” boasts the 42-year-old actress who these days spends her time between Melbourne and Los Angeles.

Series member Simmone Jade Mackinnon, who for six years played Stevie Hall, a jillaroo, became the real thing last year after competing in a charity cutting event. She’s now working full-time on a cattle station in central Queensland. “I’m a jillaroo at 46 and I just love it,” she says.

Jim remembers the episode when she and Alex married. “The couple were on horses and Stevie’s wasn’t quite ready for the long white wedding dress she was wearing – there was a bit of a crash but no bones broken. In fact, the only real injury during all the years was when my brother, Bill, got tipped off a horse he was training and broke his arm.” 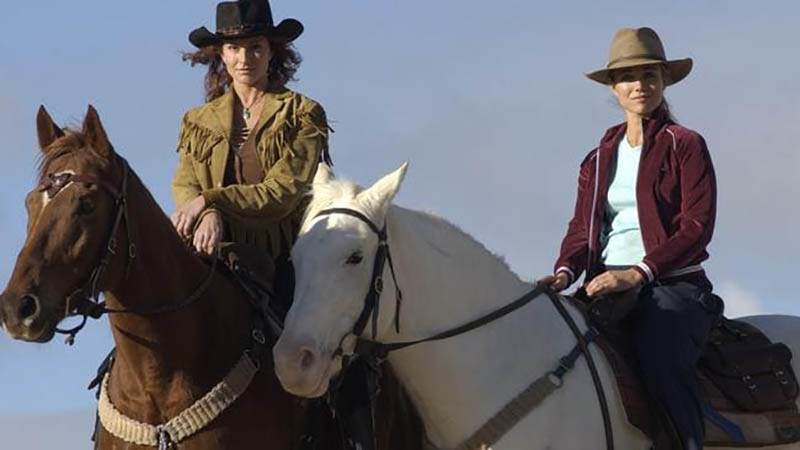 The McLeod’s schedules were very tight, a new one-hour ep had to be shot every nine days, and there was a lot of action. “Not wanting to take risks we’d sometimes use riding doubles and many of those riders were from my or Bill’s family who were working with us on the series,” says Jim. “We filmed at ag shows, rodeos, polocrosse matches and other locations representing rural Australia.

“Often one line in a script represented weeks of sourcing and preparation, such as when storylines featured the birth of animals. We had mares foaling, cows calving, ewes lambing, dogs having pups and alpacas doing what they do when they have babies. As well as wild pigs and emus!

“I really enjoyed being part of McLeod’s Daughters. Two hundred and twenty-two episodes of very watchable television – we’re lacking a bit of that in Australia right now. I’ve heard there’s a chance a feature film is to be made called The Mcleods of Drover’s Run.  I’d definitely throw my hat in the ring to be part of that.” 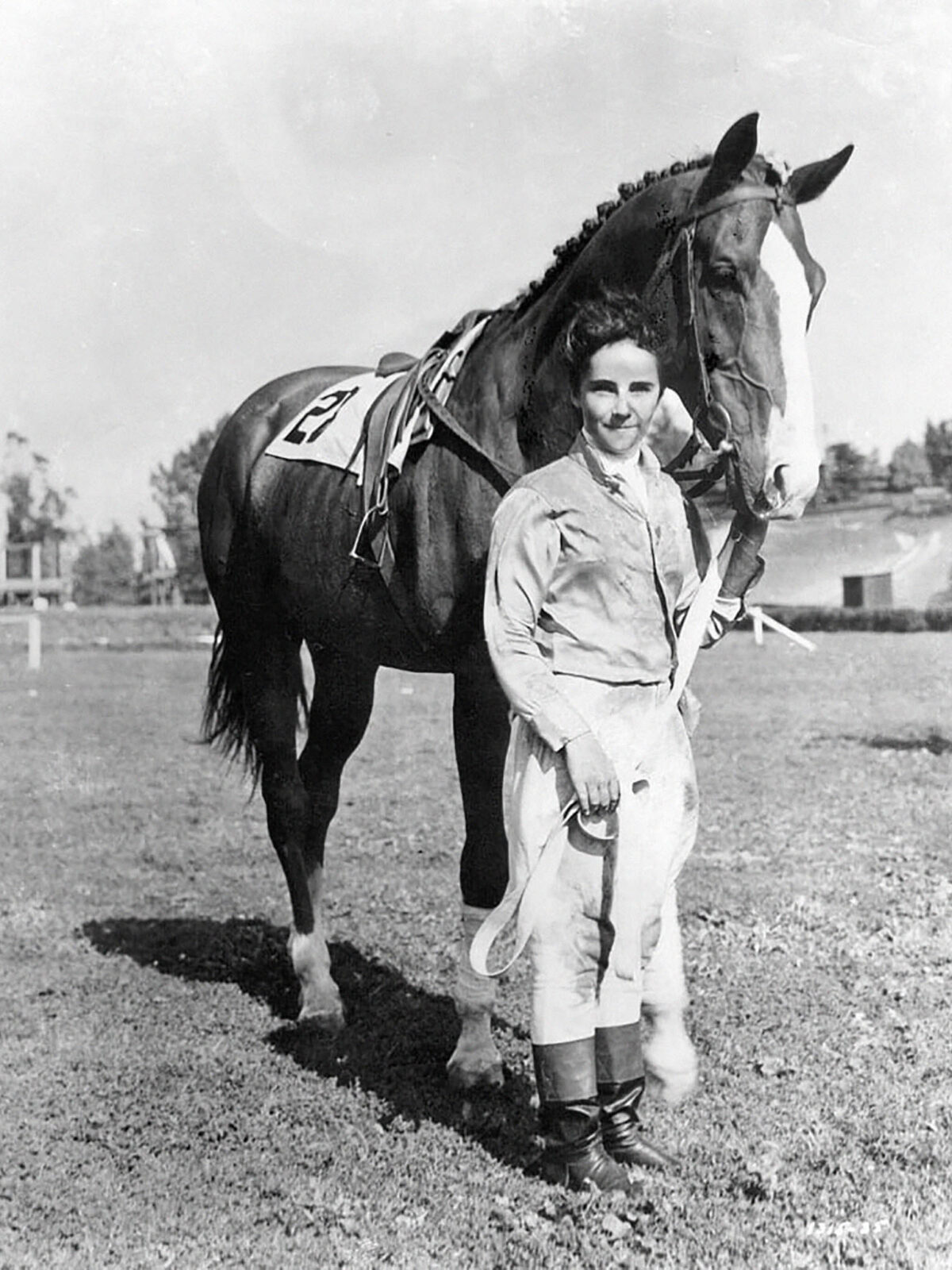 Elizabeth Taylor as Velvet, with The Pie. 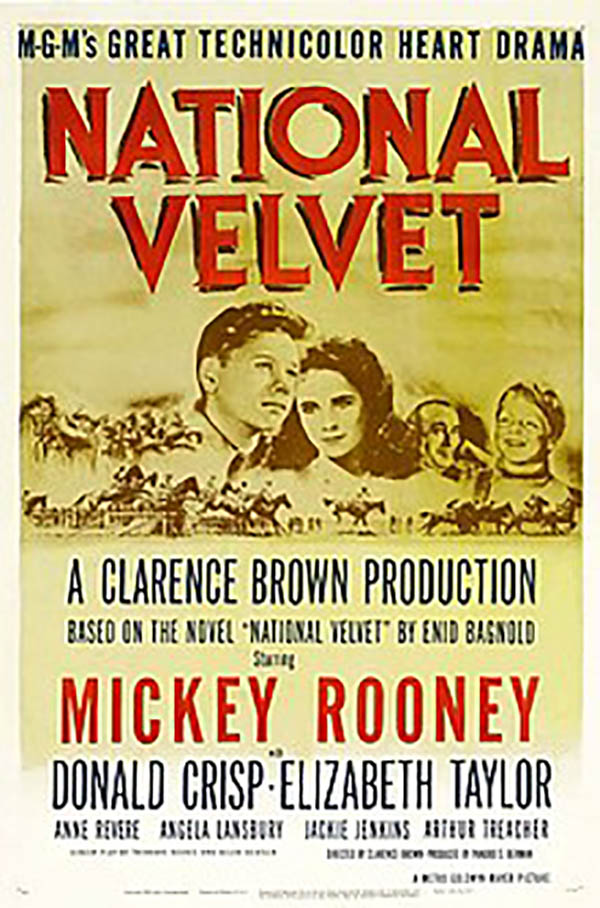 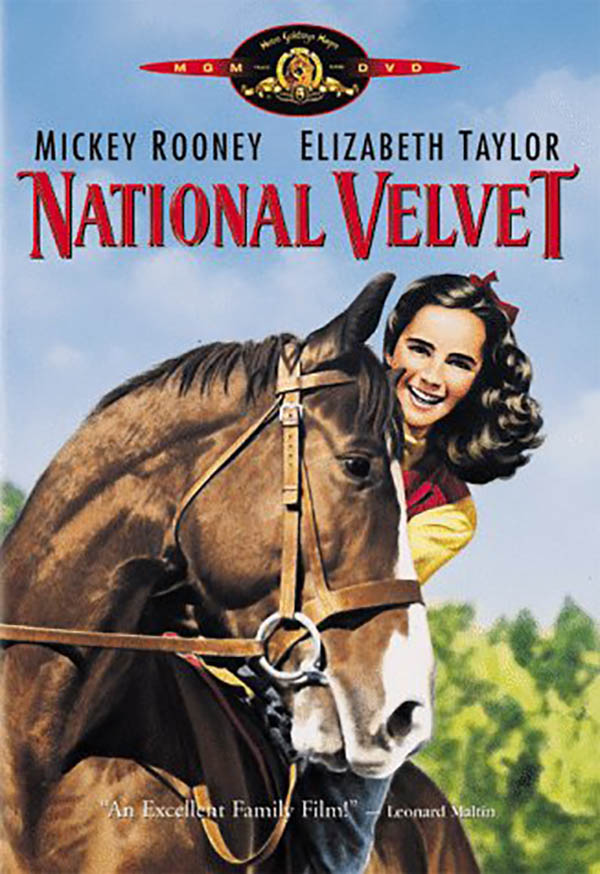 Elizabeth Taylor is famous for playing Velvet Brown but she wasn’t MGM’s first choice for this famous classic back in 1944 – it was initially offered to Gene Tierney who was unavailable due to commitments on Broadway.

Director Clarence Brown considered 12-year-old Elizabeth too “boyish” – the character was supposed to be in her late teens and “womanly”. Determined to get the part, the young Taylor ate steak every day and constantly rode horses – in three months she had grown three inches and had become “shapelier”. The role was hers.

A year earlier this rising child star had appeared as Priscilla in Lassie Come Home. (Lassie was played by a male Rough Collie named Pal). Known as a quirky girl who always had animals around her, Elizabeth was strongly attached to a chipmunk named Nibbles and was rarely seen without him. And as a toddler in England she had a pet pony before moving to Los Angeles when she was nine. Throughout her life she would always have animals – together with a varied collection of husbands.

Elizabeth Taylor immersed herself into the Velvet Brown character who trains a horse named The Pie. She competes in and wins the Grand National steeplechase only to be disqualified from the male-only race when it is revealed the winning jockey was her, a woman.

The film was based on a novel of the same name by Enid Bagnold, published in 1935. In the book the horse is piebald; in the movie it is a chestnut called The Pirate, aka The Pie. National Velvet’s co-star was 24-year-old Mickey Rooney, who went on to have as many spouses as Elizabeth. MGM shot all his scenes first as he had been called up into the army.

Playing The Pie was King Charles, a thoroughbred show hunter. Elizabeth rode him each day at the Riviera Country Club. She also fed and handled him, establishing a close bond with the seven-year-old who was sold to the film company for $800. He was the grandson of Man o’ War, considered one of the greatest racehorses of all time, and a first cousin of Seabiscuit, who shared the same grandsire.

King Charles was very unpopular on set, nipping crew and cast members and ignoring commands from horse trainer Egon Heep, whose shoulder he savaged when Heep was trying to teach him to play dead for a particular segment. He would only cooperate with Elizabeth, yet even she experienced some unpleasant moments.

During the filming of a race sequence she was thrown and badly hurt, but returned to work quite quickly. (She had been born with scoliosis and broke her back in this accident, but the fracture went undetected for several years). She was to suffer severe back pain all her life. 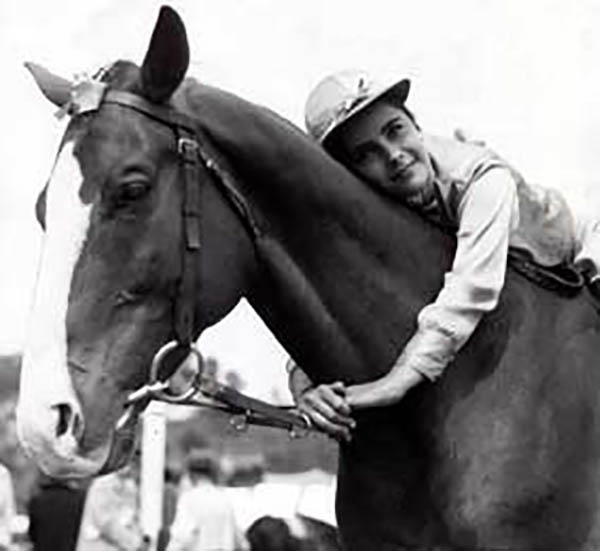 Velvet Brown and The Pie. 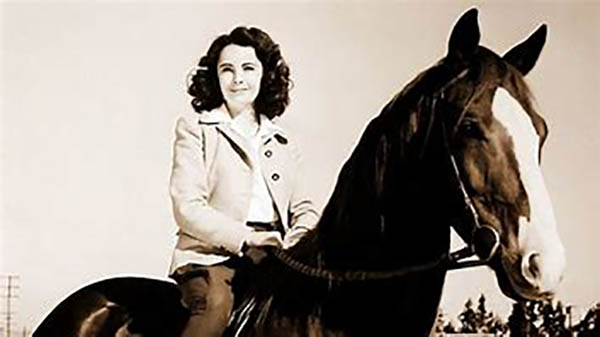 Elizabeth Taylor and King Charles aka The Pie.

“Elizabeth rode him
each day at the Riviera
Country Club.”

Elizabeth did some of the riding in National Velvet but “stunties” had been hired for many of the takes. ‘Snowy’ Baker, an Australian boxer who went to Hollywood to make his fortune, did a lot of the horse work, plus gave the young star riding lessons. And former jockey and rodeo rider, Alice van Springsteen, doubled for her in many scenes.

Despite the injuries inflicted by the feisty thoroughbred, Elizabeth adored King Charles and, at the end of the film on her 13th birthday, he was presented to her. He stayed with her for the rest of his life. She was to call National Velvet the most exciting film of her career, which spanned over six decades.

Catch up on Part One of this series from our August issue here.

Next time: The Man From Snowy River and Mister Ed. EQ

Courageous Kiwi blazes her own trail – Part 2 (By Roger Fitzhardinge)