Isabel English and Lissa Green are two accomplished young Australian eventers based in Southern England where they are well on the way to the top of their sport. Despite the different routes they are taking, their objective is the same. 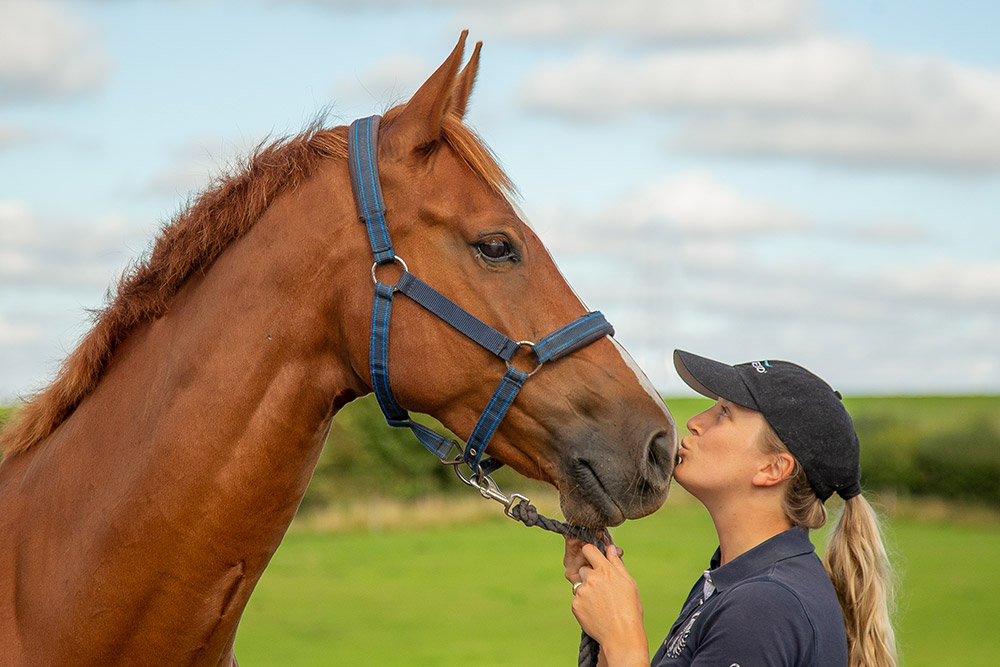 Isabel English, 25, grew up with her older sister in Biddaddaba, Queensland, where their mother, Sarah, worked for the renowned Belcam Stud and their father, Nick, was a doctor. The family always had horses at home and the parents are still breeding horses at their Cil Dara Stud. Isabel is currently campaigning the five-year-old Cil Dara Dallas, her parents’ homebred gelding who picked up a pleasing second place at Dauntsey Park (UK) in a BE90 this summer. Isabel has great hopes for Dallas, who is by Paul Schockemohle’s jumping stallion, Diarado.

Lissa Green, 31, is the daughter of Olympian eventers Lucinda and David Green, who need little introduction. Lucinda (nee Prior-Palmer) is a living legend, highly regarded by her peers and the worldwide eventing community. Lissa was born in the UK and grew up near Andover Hampshire.

The great and the good of the eventing world passed through Lissa’s childhood home; she was in the enviable position of benefiting from their company and admits that. To her family, the likes of William Fox-Pitt and Pippa Funnell were just normal family friends. Lissa’s father has moved back to Australia and she visits him every year during the English winter.

Lissa tells a great story about how she had already “competed” at Burghley even before she was born — unfortunately it was not the most successful outing, as her mother fell at the sixth fence in the cross country. Lissa adds that she has always been slightly jealous of brother Freddie, as he “competed” at the Olympics in 1984 before he was born, when Lucinda was part of the silver medal-winning team!

Both Isabel and Lissa rode ponies from a young age. In her early years in Biddaddaba, Candyfloss, the palomino 12hh pony, made a huge impact on Isabel, and she still speaks fondly of her! Candy entered Isabel’s life when she was nine and she remembers waiting impatiently for her 11th birthday so they could go eventing together! Candy took no prisoners and was not a push-button ride, much like the evergreen Feldale Mouse. Mouse is the stalwart horse of Isabel’s career to date. As a youngster, Mouse would constantly test Isabel when she rode him, very often depositing her unceremoniously on the ground. Isabel would at those times refer to Mouse as ‘Rat’ on account of his terrible behaviour

Fellow Australian Kevin McNab, with whom Isabel is now based with at Guildford, south of London, took over the ride on the young Mouse until Isabel grew in both in stature and experience to regain Mouse’s reins. They are now an exceptional partnership and it is always a pleasure to watch them ping around the cross country phase in perfect harmony. 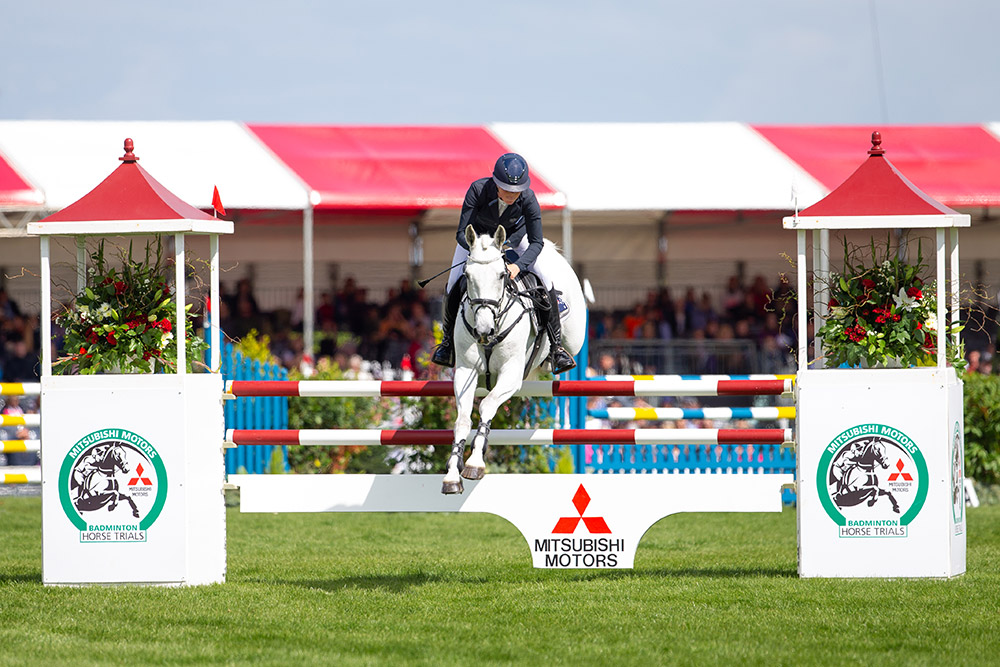 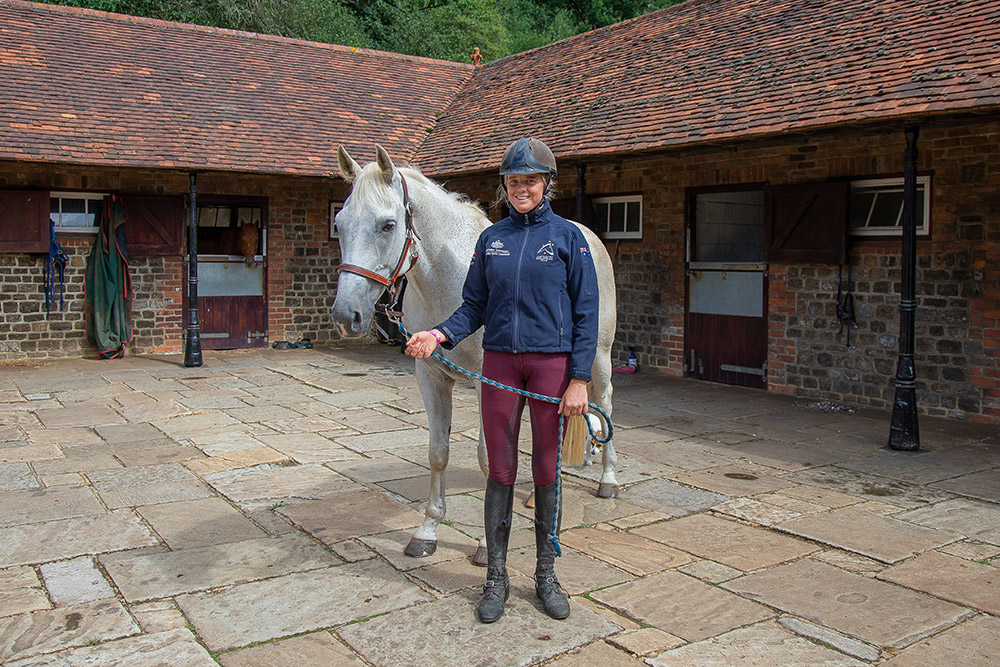 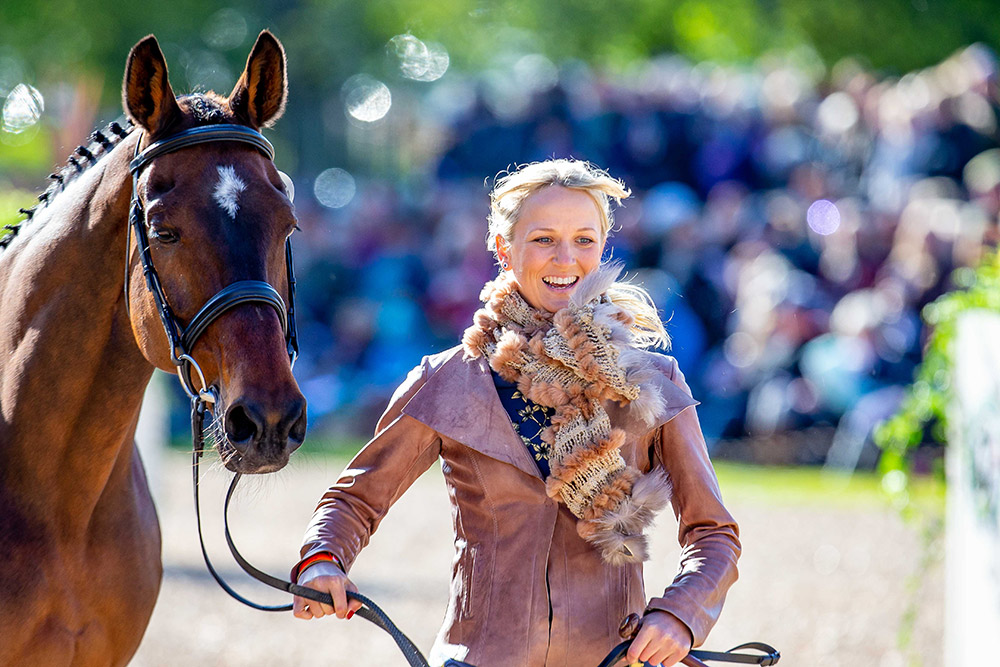 Lissa Green and Hollyfield in the trot up at Badminton in 2018. © Elli Birch/BootsandHooves 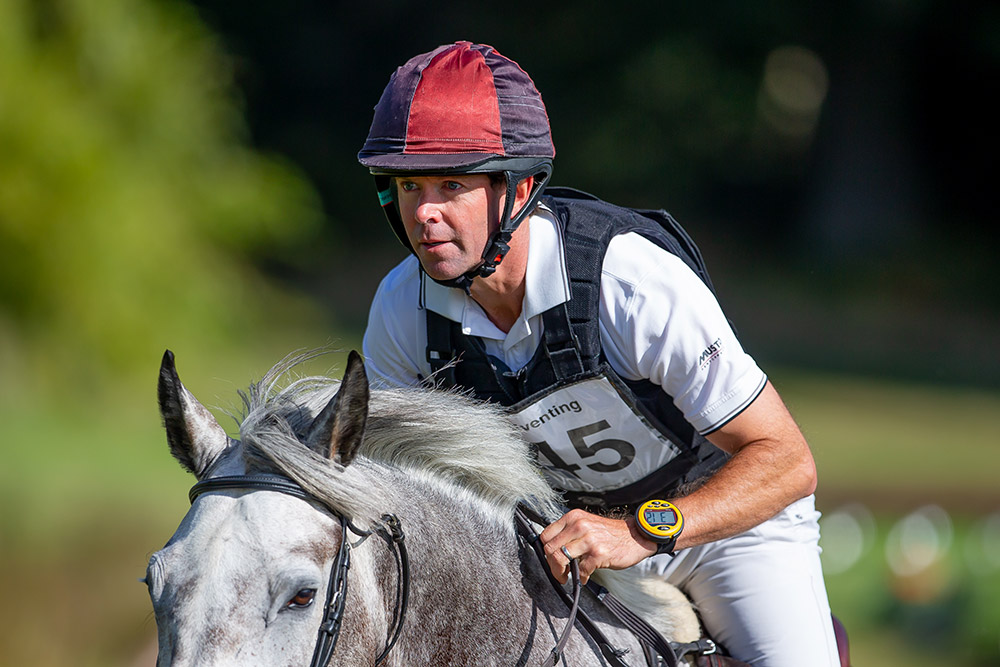 Isabel is currently based with Kevin McNab, who is pictured here riding Cute Girl in the CCI2*S at Wellington International Horse Trials. © Elli Birch/BootsandHooves

“Mum is the mastermind
behind my deep-rooted love
of going cross country.

Lissa was a member of the Pony Club, belonging to the Royal Artillery branch and represented it on a number of teams over the years. She has always hunted and feels that the hunting field is the best place for eventers and their horses to learn their craft with regard to riding across the country. All of Lissa’s young horses spend at least half a season being hunted. Like most eventers, her favourite phase is cross country.

“Hollyfield really taught me how to ride fast in this phase, I find it the most exhilarating feeling,” says Lissa. “Mum is the mastermind behind my deep-rooted love of going cross country; there is nobody better to walk a course with than her.” What Lucinda Green does not know about cross country riding probably is not worth knowing!

As well as great support from her mother, Lissa has lessons with dressage Team GB member Gareth Hughes as a result of being on the Australian Eventing Pathway programme, something that Lissa feels has been most beneficial in her career to date and she has grown to love dressage.

Isabel first represented Australia in 2012 when she was selected for a Young Rider competition at the South Island Three Day Event in Christchurch, New Zealand. Since then, they have competed at some of the biggest and the best horse trials in the world, including Aachen where Isabel and Mouse were on the Australian Nations Cup Team, which finished in third place. 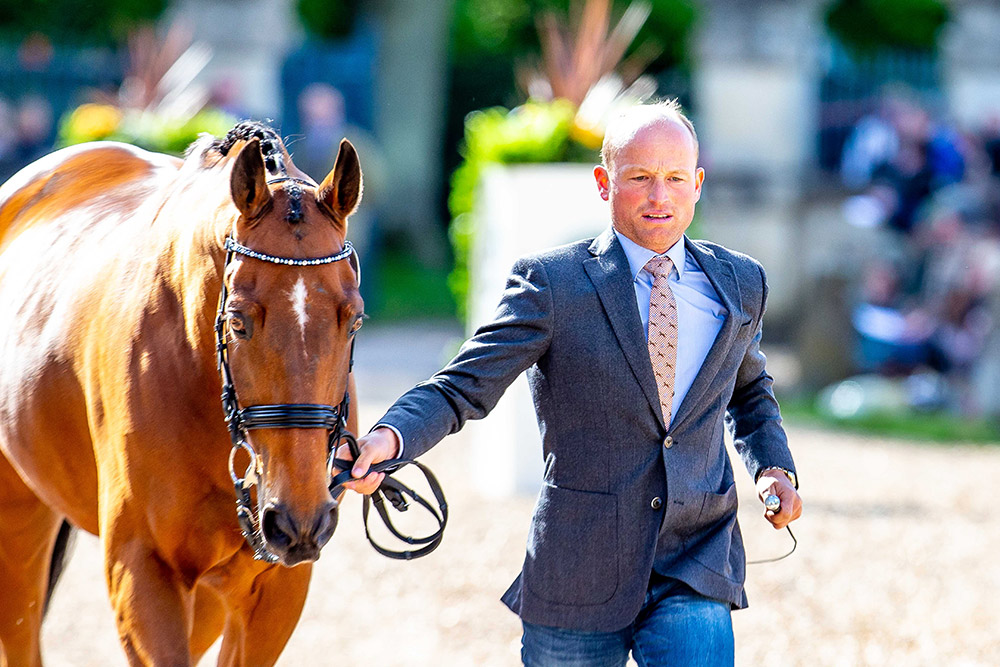 Isabel has trained with Michael Jung, and admires his partnership with Sam - both pictured here in the trot up at Badminton in 2018. © Elli Birch/BootsandHooves 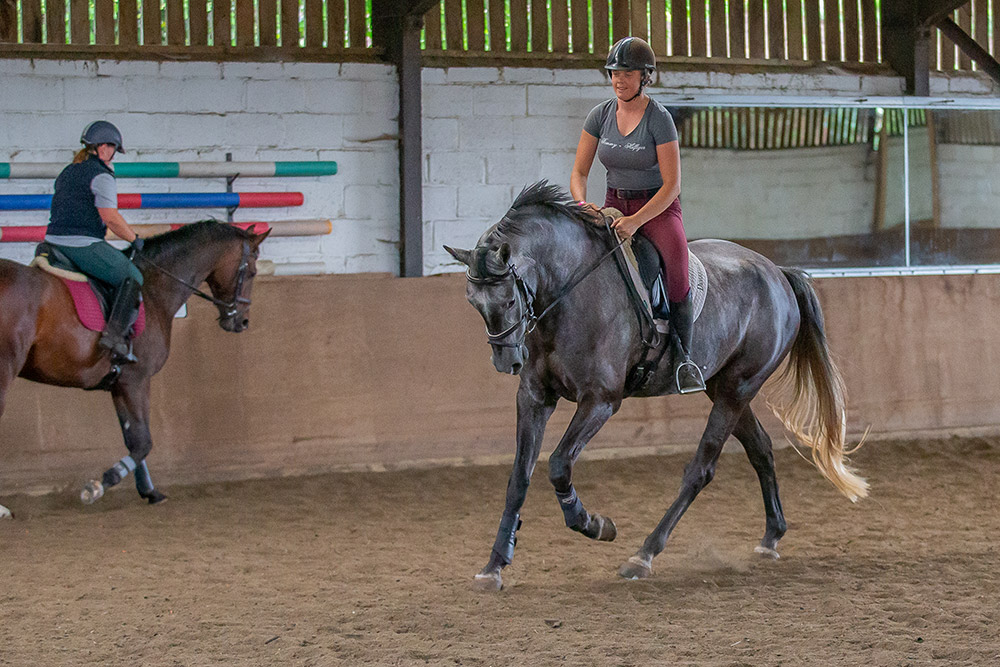 “Lissa has had to deal with the
pressure of being the offspring
of renowned parents.”

Despite her age, Isabel copes with the pressure of being on a team or performing for her owners with apparent ease. As no two events are alike, her approach to dealing with pressure is to get the homework right and prepare for each event appropriately. For example, some cross country tracks are technical but not huge, while others are very big but do not ask the questions of a more technical track. In eventing you always have to look at the end goal and plan competitions accordingly. Like all sports, Isabel has to deal with the highs and lows; she feels you need plenty of patience and resilience when things are not going your way and to always focus on the bigger picture.

Over the years, Lissa has had to deal with the pressure of being the offspring of renowned parents. On one occasion, a fellow competitor’s mother pointed out this fact. Lissa tells the story with a grin on her face: “In my first affiliated event, aged 15, I was thrilled at coming seventh in my section only to have my bubble burst when I overheard another competitor’s mother saying to her daughter, “Well done, you have beaten Lucinda Green’s daughter, she obviously does not take after her mother!”

SMILE FOR THE CAMERA

Isabel and the diminutive Mouse, 17, have had many successes over the years including jumping clear at their first Badminton attempt in 2019, and have represented Australia on numerous occasions. On my visit to the yard, Mouse was more brown than flea-bitten grey, as he had been out in the field having competed the day before. He looked distinctly underwhelmed at being brought in from the field, however, being the consummate professional that he is, he pricked his ears and smiled for the camera. 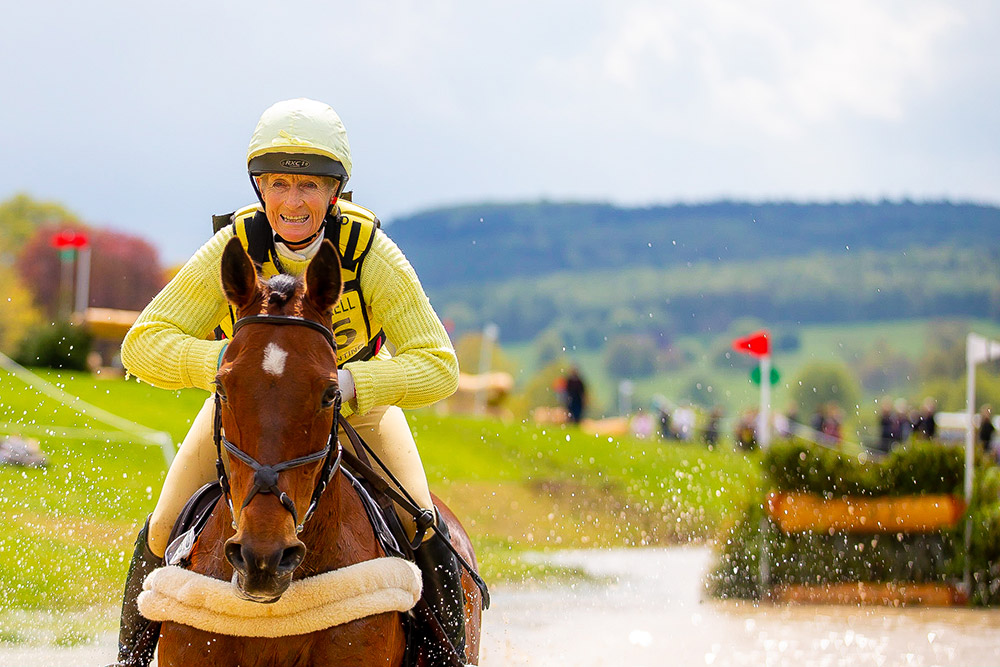 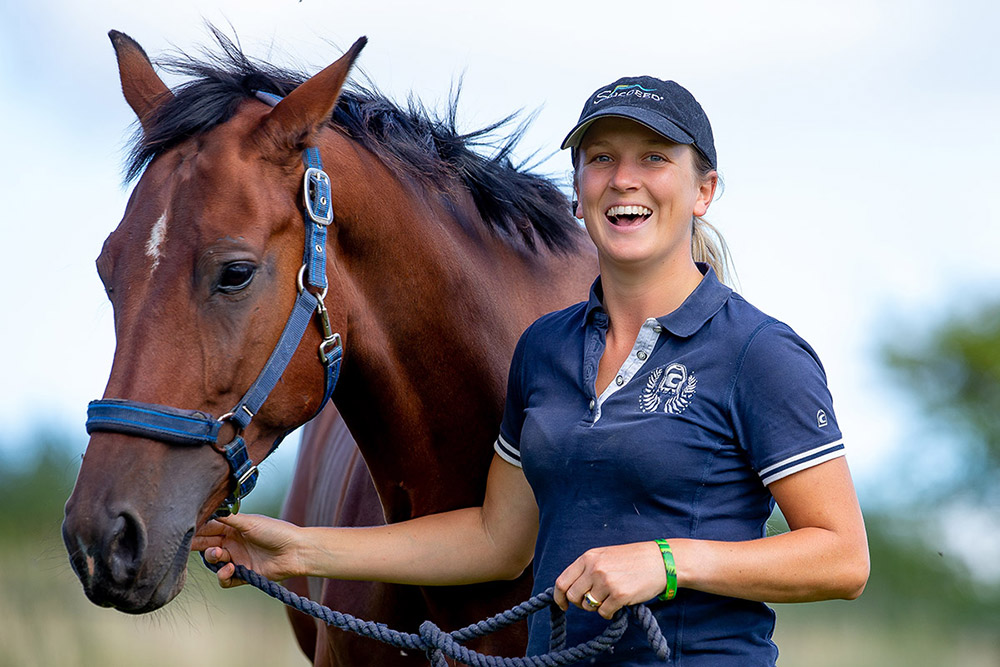 “Isabel… speaks with
passion about her horses
and her plans.”

Isabel is a bright and engaging character who speaks with passion about her horses and her plans for the future, which involve the Olympic Games and winning Badminton. She rides a number of horses from BE80 upwards that are at the Guildford yard of Kevin and Emma McNab. Before joining the McNabs, Isabel spent two years training with the inimitable Michael Jung, who, along with Kevin McNab, is a childhood hero of hers.

Isabel says that the eventing partnership of all time to which aspires to emulate is Michael Jung and La Biosthetique Sam FBW, prolific winners of many competitions, including Individual Olympic Gold at Rio in 2016. Being based with Michael Jung has had a huge impact on her and stands her in good stead as she continues her training with Kevin McNab. She says Kevin is a great horseman, trainer and an inspiration to her. Isabel’s other long-time trainer is the renowned Tony Manca. He is based with her parents in Queensland, so she does not see him a great deal although he made the trip to the UK to support her at Badminton in 2019.

Lissa studied at Bristol University where she gained a Criminology and Forensic Science degree. If she was not eventing she would have loved to become a criminal profiler, as she finds that world fascinating. Lissa always kept her hand in with the horses while at university and latterly when she took a job teaching PE at a school. The attraction of eventing full-time finally won and Lissa started to build a team of horses in her mid-20s. One of them, Hollyfield, realised her dream of competing at the Badminton Horse Trials. 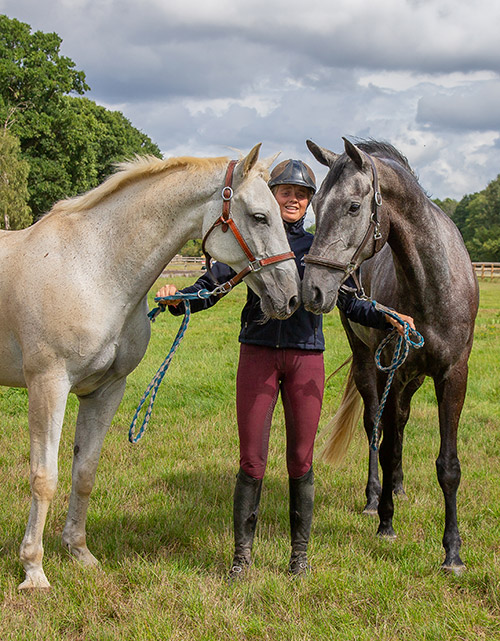 “These two girls clearly
have the enthusiasm,
talent and commitment…”

Lissa has had a few setbacks in her career, including a serious fall in 2015. A non-horse related accident in 2018, followed by a further fall just seven days later during an indoor eventing competition in Sweden, caused Lissa to suffer two concussions in quick succession. Although improved, she is still battling with the symptoms on a daily basis. However, to meet her you would never know; her infectious laugh, ever-present grin and boundless enthusiasm defy her daily struggles that she talked about quite candidly. Lissa has recently trained with Pippa Funnell, who, like her, has suffered the consequences of concussion, and has been helpful in supporting and assisting her in how to deal with its effects. Lissa, now based near Winchester, Hampshire, is building a team of young horses with her mind firmly set on the future, in which winning Badminton, representing her country at the Olympics and winning a medal are pretty good ambitions!

Despite horses playing such a huge part in Isabel’s life, she did not hesitate when I asked her what sport she would be doing if she was not eventing; the unequivocal answer was “tennis”! As well as riding many horses every day, Isabel keeps fit with running and boot camp sessions. When she has free time, she enjoys reading and spending time with friends. Upon leaving school, Isabel mulled over the idea of becoming a pharmacist, then began to study economics at university before the allure of the eventing circuit became too great to resist.

As much as she loves being based in the UK, Isabel does get homesick, but believes that if she wishes to fulfil her eventing dreams she needs to be based in Europe. Covid 19 has had a huge impact on every single one of us in 2020, causing frustrations in regard to having fit horses ready for competitions that were all cancelled. Isabel has reaped the positives from the situation by having far more time to spend on the up and coming string of young talent that she is producing. She thinks in the long run it will probably be a good thing to have been able to spend so much more time with the youngsters. That said, she is happy to be competing again and is enjoying having a full competition diary.

These two girls clearly have the enthusiasm, talent and commitment to see them both realise their dreams. EQ

Chris Burton sees the bright side of 2020 (In this issue)

A tale of two Emmas (In this issue)