Carolyn Law’s adventurous life journey takes a new turn after she meets John Lieutenant at a party in 1972. Together they develop their dream property and become a force in the emerging dressage scene. 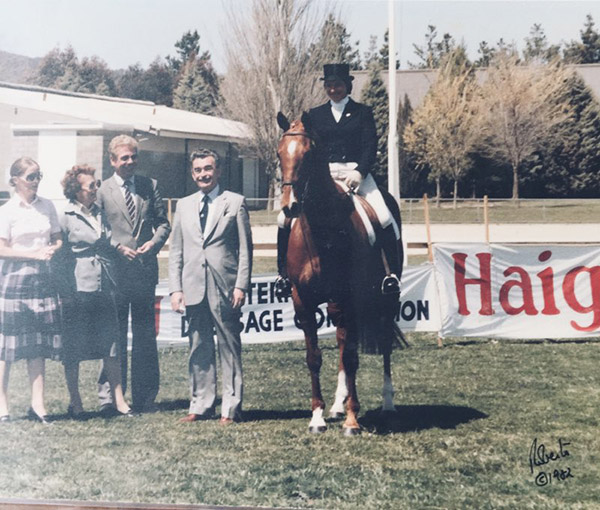 “Carolyn’s equestrian prowess
is proven and she never
demands attention.” 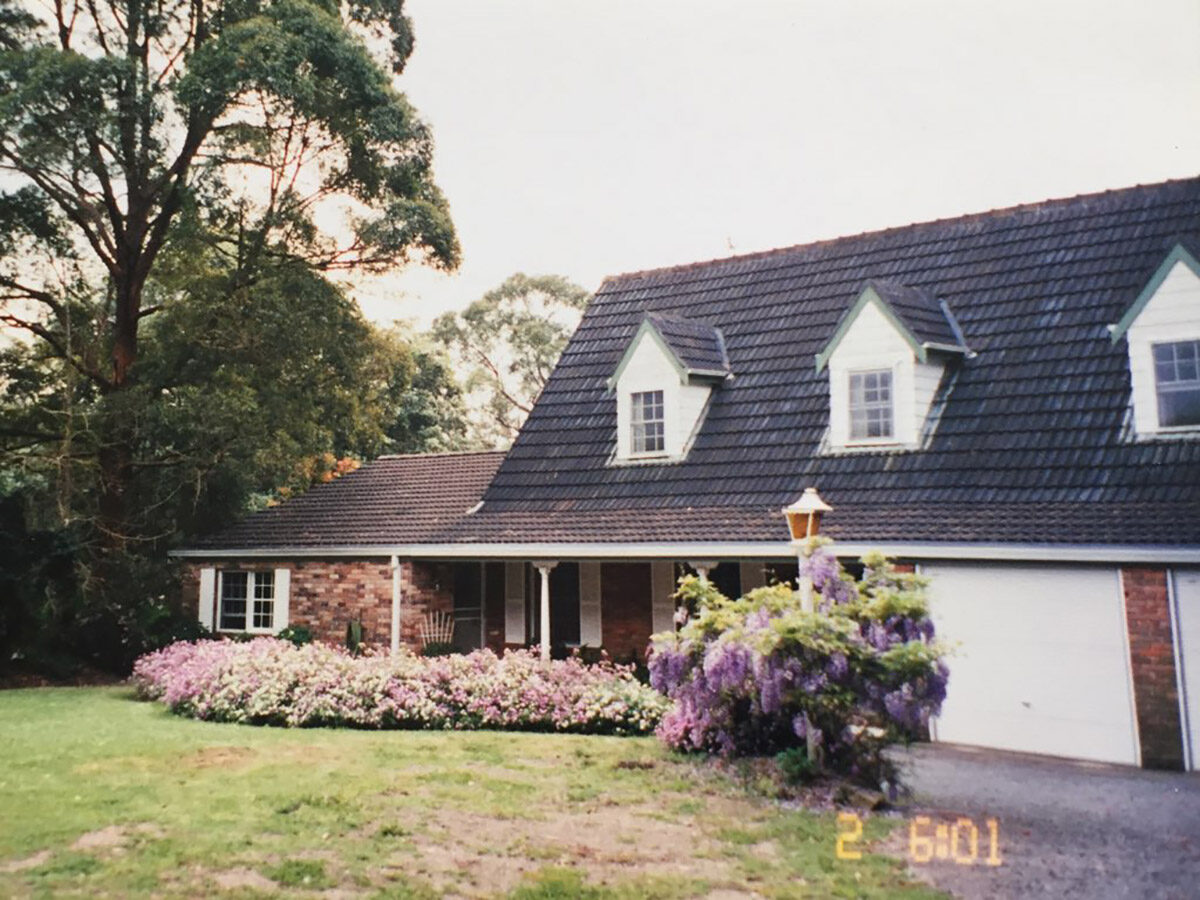 The house at Wasseiges; the property was named after John's family's property in Belgium.

Carolyn Law had gained a wealth of experience since moving from New Zealand to Australia. Carolyn and John moved in together at Carlingford, north-west of Sydney, where she commuted from to her work with the Hungarian master horseman Karl Jurenak at his property and training establishment at Tibor Equestrian Centre, an hour west of Sydney. She was a working pupil there where she rode many great horses for their owners.

As we covered in Part 3, winning the Garryowen at Melbourne Royal in 1972 was a serious highlight and accolade for Carolyn. She had won many classes at Royal shows with hacks and in lady rider classes on the flat and over jumps, but the Garryowen Perpetual Trophy was then the most prestigious of all. Carolyn was also extremely competitive in the showjumping arena and had competed in front of the Queen in an invitation class at Sydney Royal.

I have to say that Carolyn is one of the most humble and respectful people you will ever meet. Well-heeled and travelled and well-read, she is quick-witted and smart and does not suffer fools! Carolyn’s equestrian prowess is proven and she never demands attention. She is simply upstanding and stands up for herself! As soon as you meet Carolyn you sense her bearing; it is just something that is immediately innate and apparent.

John and Carolyn looked around the Dural area for a property where Carolyn could start her own business, coaching, training and riding dressage horses. They finally found a wonderful five acres, which had only a Cape Cod house on it. It was a very long and narrow five acres on undulating country at Galston, NSW.

They named the property Wasseiges after John’s family’s old stately property in Belgium that was demolished in World War II. Together they undertook the task of establishing the infrastructure to make the property workable. John had worked for a wool business, but when the downturn in wool occurred, he turned to being the secretary for a friend’s successful packaging company.

Carolyn had many students and thought it was time to buy a horse of her own. The resulting horse was Crinan, a spirited chestnut thoroughbred sold to her by Carol and Warren Pratley. Carolyn showed horses very successfully for the Pratleys, who had bought Tibor from Karl Jurenak. There were horses such as Trinity, who won the 10-stone (63.5kg) hack class at Sydney Royal two years in a row, and the grey Royalty.

Crinan was by the sire Nullarbor, and was a good moving chestnut that had raced until the age of eight. On buying him, Carolyn decided to ride him home, as the Pratleys’ property was not far from Wasseiges. It was a ride that Carolyn has never forgotten as she wondered whether she would actually survive on the feisty ex-racehorse!

Needless to say, Carolyn trained and competed Crinan with success to FEI small tour, ultimately winning the first Haig Cup International Dressage Competition in 1982. The Haig Cup was introduced to foster dressage development in Australia, New Zealand and South Africa and involved international judges travelling to each country to judge horses at Prix St Georges level and decide on the winner. Crinan was the first horse to go in the series and led all the way to win!

By this time, Carolyn and John had seriously developed Wasseiges; there were three stables and a tack room, and a great river sand dressage arena set up on the other side of a creek that ran through the property. Glennis Scott was training there on Hinkler and Caroline Hooper on Merefield Zia amongst many others. With often several lessons a day as well as owners’ horses and Crinan, Carolyn was not short of work or enthusiasm.

At various times, there were horses in training for competition, including three stallions — Chico D’Oro for Bev Chugg; Mustafa, a well-known imported Arabian stallion; and Sandchez, an imported Andalusian owned by Jan Carver, a great dressage supporter who worked tirelessly at fund-raising for the NSW dressage community. 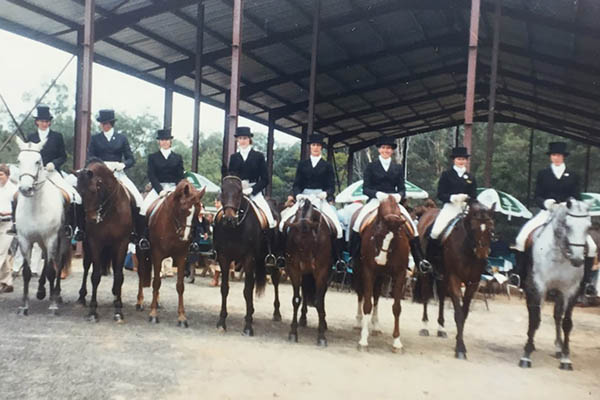 The quadrille team that Carolyn organised. 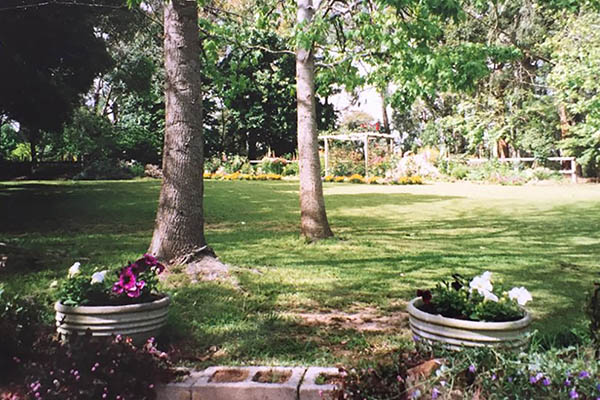 The beautiful gardens at Wasseiges. 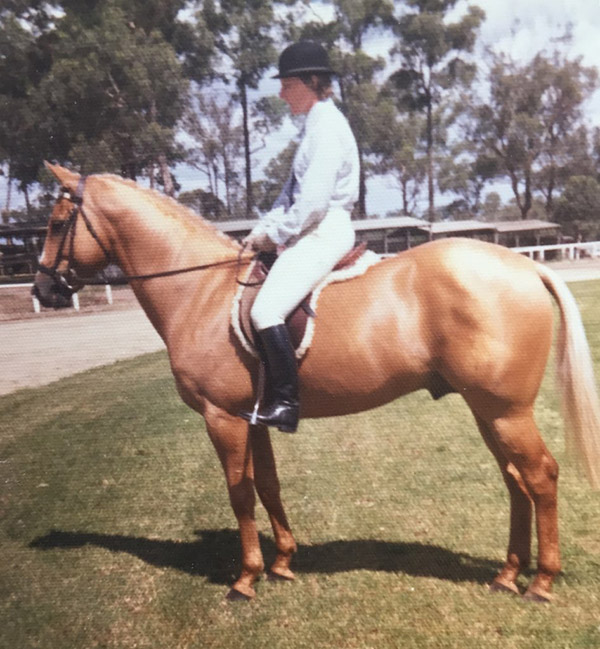 Bev Chugg's stallion Chico D'Oro was in training at Wasseiges.

“Carolyn continued to ride and compete
other people’s horses and her prowess
as an instructor was highly sought after.”

In 1979, Jan had raised enough money to send horses to the National Championships in Perth that year. She put together a quadrille to showcase the sport and sold it to El Caballo Blanco for the opening of the legendary theme Park in Sydney. El Caballo became a highly successful attraction at the Australiana theme park and crowds flocked to the shows to see the dancing horses where Carolyn was the organiser. (Crinan wasn’t involved as Carolyn didn’t think he would keep his cool in a quadrille in the rowdy environment).

For those who remember the shows, they were made up of eight horses — two bays, two greys, two chestnuts and two browns. The riders were Sue Steggles and Bandallero, Wendy Johnstone and Runs On Love, Linda Peek and Sunny, Jackie Smith and Jean Pierre, Anne Honor and Germaine, Bev Chugg and Peter’s Pal, Helen Crowley and Moliere, and Libby Lang with Le Padre.

The quadrille was also shown at the showjumping international event in the first week of the new year at Wentworth Park in association with the Sydney Festival. It wasn’t long after this that Carolyn rode a purebred Arabian gelding named Quasar, bred by RM Williams, at the National Dressage Championships held in South Australia. At the Championships, she partnered with Reiner Nist (Kristy Oatley’s father) and Mazeppa, and Jim Delamont on another Arabian gelding, to form the NSW team.

Carolyn continued to ride and compete other people’s horses and her prowess as an instructor was highly sought after. At this time there were a lot of international instructors, including Hubert Eichinger from the Spanish Riding School in Austria (who Judy McKay would invite out to help at her Queensland property at Bogabilla), Japp Pott, Rosemary Springer, Wolfgang Niggli and Nuno Olivero, to mention a few. Carolyn’s thirst for knowledge saw her take every opportunity to work with the masters. 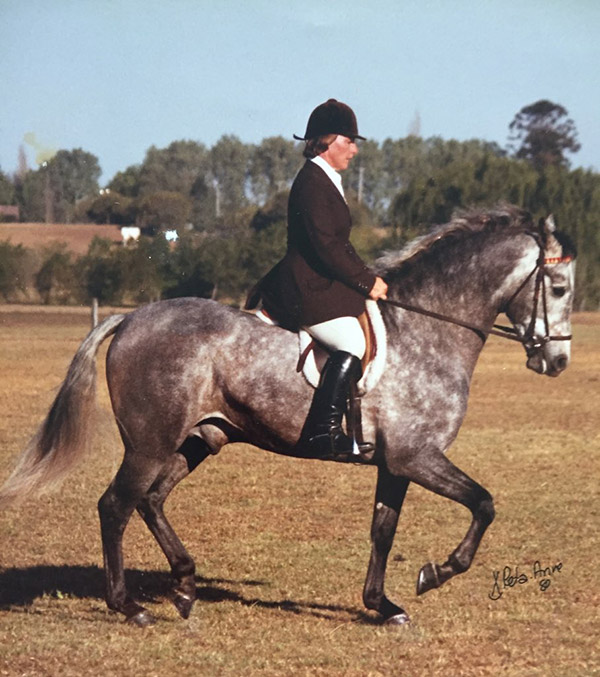 Another stallion, the imported Andalusian Sanchez, was in training with Carolyn at Wasseiges.

Some of these instructors would always stay with the Lieutenants, and John was such a personable guy who loved to look after the internationals. Saying this, Wasseiges became known as ‘New Zealand House’, as whenever riders from over the ditch came to Australia they would stay with their native “bro” Carolyn. Not just internationals but any country folk and judges were always welcome at Wasseiges.

By this time Carolyn had a series of working pupils who lived in a caravan behind the stables. Carolyn says they were all fantastic and helped her so much and without their input she would have been lost. The working pupils all appreciated what they learnt and Carolyn’s disciplined and methodical way rubbed off on them forever!

John became a member of the NSW Dressage Council and Carolyn head of the judges’ sub-committee and they both worked towards progressing dressage in NSW. John was also a chief steward at the big competitions and was always keen to look after riders’ interests.

In 1981, Carolyn bought a young brown Duelschultz gelding Duellmeister, and broke him in and subsequently campaigned him to Medium level before he was sold to Michelle Kelly as a showjumper. 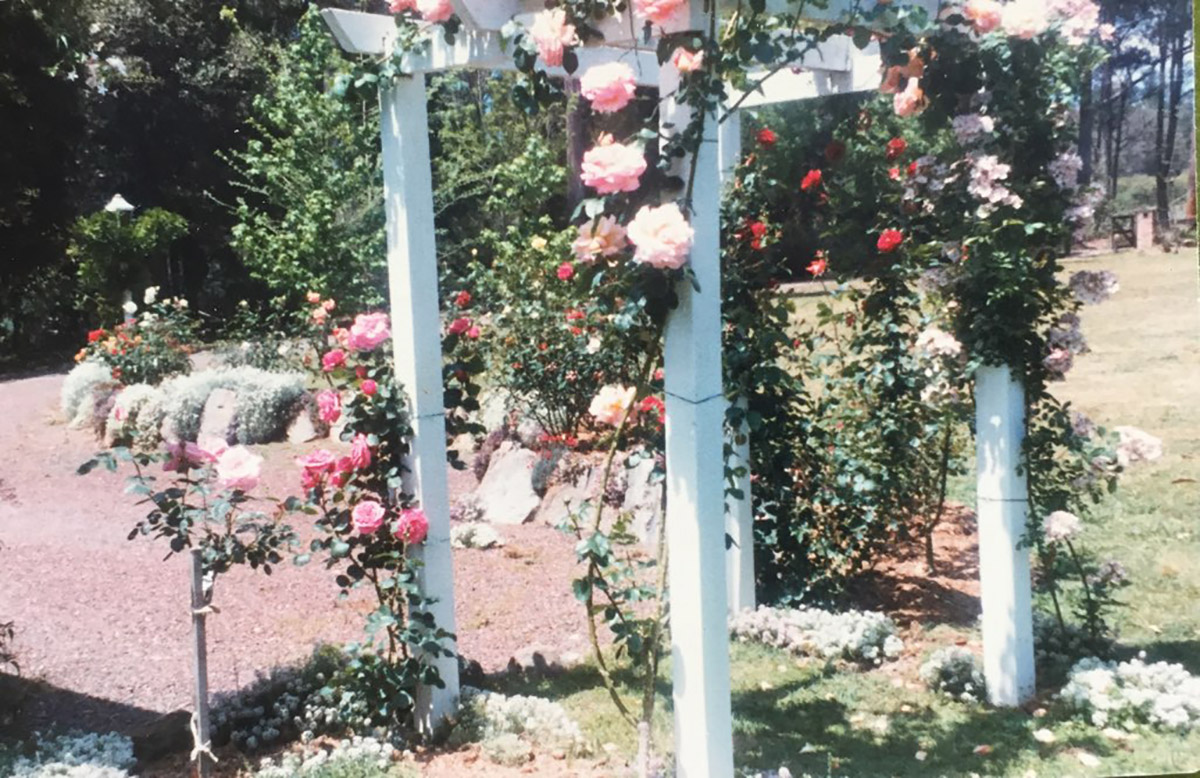 The rose garden at Wasseiges. 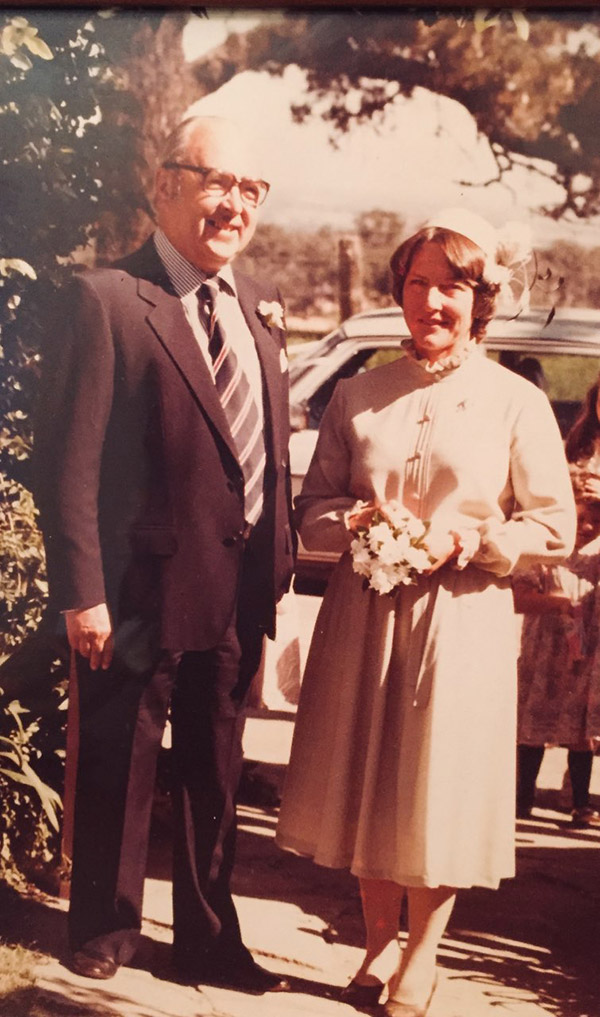 On 24 April of 1982, Carolyn and John were married at their property in Galston and it was later that year that they went together to the Commonwealth Games in Brisbane, leaving their working pupil Glennis at the Galston property to keep Crinan ticking over before the Haig Cup. Carolyn says her winning the Haig Cup was also attributable to the diligent basic work that Glennis did with Crinan in the lead-up.

It was now to buying another Duellshultz horse in Duell Asta, a very elegant bay who was very successful before being bought by Allen King. At this time Carolyn was also breeding Staffies, which she loved and she took much pleasure in giving pups away to her friends.

Next Carolyn purchased Emesar from the prominent up-and-coming rider Nicola Allen (now Pfaff). Emesar was a thoroughbred gelding who was bought to give Carolyn the experience of training and competing at Grand Prix, which they did including travelling to New Zealand to compete.

Carolyn’s family has always had fabulous gardens and at Wasseiges the tradition continued with Carolyn specialising in roses of which she is fanatical. Later in life Carolyn enjoyed going on garden tours internationally as her love of gardens was so strong. The stunning Wasseiges garden was used to entertain many guests, family and friends, including Carolyn’s mother and brother who often visited from New Zealand.

In 1986 John successfully stood for president of the NSW Dressage Club. Tragically, at the short committee meeting that followed the elections, John suffered a major heart attack and passed away; the shock to everyone was devastating. Carolyn was on her own. John and Carolyn had booked to go to the Dressage World Championships later that year in Toronto. Carolyn thought long and hard and decided John would so want her to go so she took her brother David. Carolyn has not missed a World Championships from that year on.

Instead of world championships for individual disciplines, they now have all the disciplines together and are called the World Equestrian Games. The first WEG was in Stockholm in 1990, where Australia was represented in all disciplines — which was quite remarkable!

It was now time for Carolyn to take a deep breath and assess her situation being on her own with her wonderful husband no longer around to inspire and help her. Be assured, Carolyn’s strong will and dogged determination goes on to flourish and shine in the next leg of her hugely successful equestrian life.

Next month: The adventure continues. EQ

Catch up on Part One of Carolyn’s story in our August issue here.

Catch up on Part Two of Carolyn’s story in our September issue here.

Catch up on Part Three of Carolyn’s story in our October issue here.