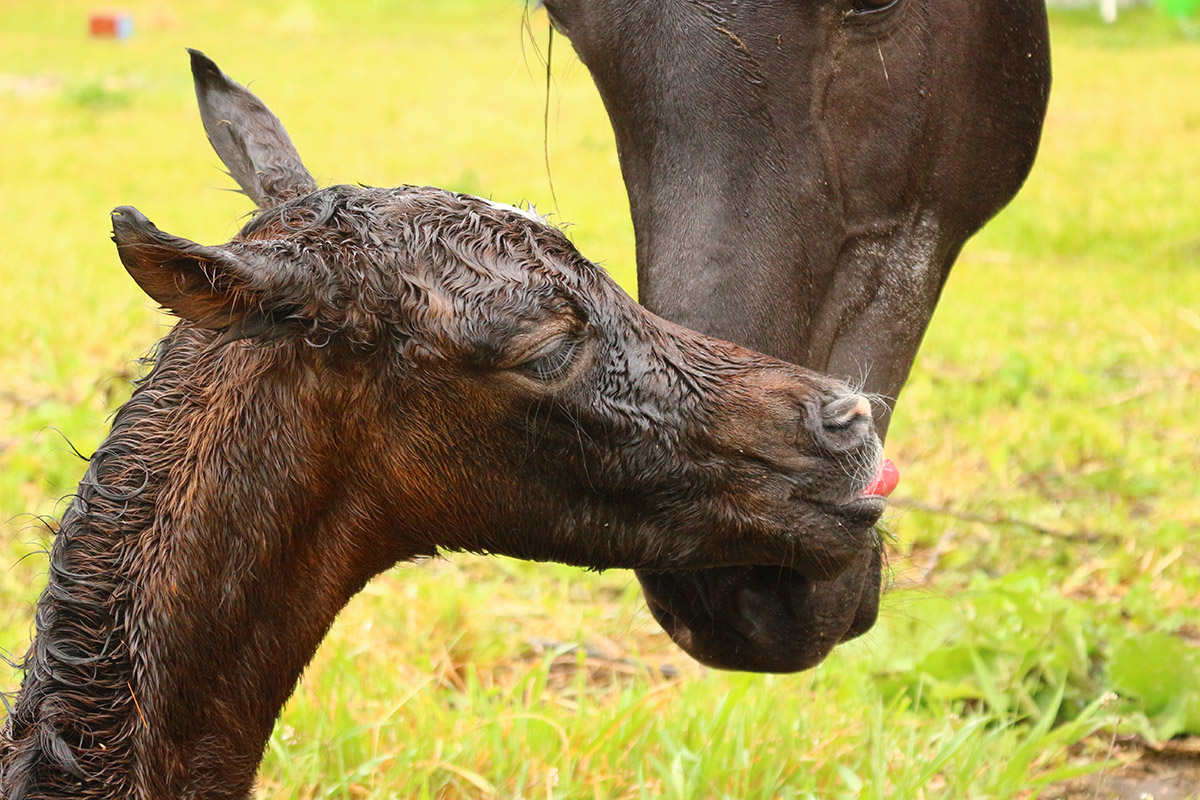 Bacterial diarrhoea is seen in foals of all ages but is a major cause of death in neonatal foals (a foal in its first week of life).
Click here to discover Virbac’s horse health hub

Bacteria, viruses, and protozoa can all cause diarrhoea in foals, and probably of equal concern, can cause diarrhoea which is readily transmissible to other in-contact foals, resulting in outbreaks on farms and studs. Parasitic diarrhoea was dealt with in the section on non-infectious diarrhoeas, although it could be argued that it should be categorised as an infection caused by worms.

Bacterial diarrhoea is seen in foals of all ages but is a major cause of death in neonatal foals (a foal in its first week of life). Diarrhoea is a predominant clinical sign associated with septicaemia in young foals. This is a systemic disease associated with pathogens and/or their toxins in the foal’s bloodstream and, if seen, needs to be addressed urgently.

Salmonella, E. coli and Clostridium are three of the main bacterial culprits that are responsible for severe diarrhoea, usually in neonates, but can occur in foals of all ages. The bacteria infect the foal via ingestion through the mouth, with the mare often being the source of contamination. These bacteria either live in the environment or are part of the mares’ usual gut flora, which in times of high stress multiply and are passed out in the faeces. Some mares carry salmonella within their gut without showing any clinical signs (“carriers”). These carrier mares, when foaling down, excrete salmonella bacteria in their faeces, which runs down the perineum onto the vulval lips, then down between the legs and onto the udder. When the foal seeks the udder, it will lick/suckle all the areas adjacent to the udder and therefore can ingest large numbers of pathogenic bacteria that have been excreted by the mare, resulting in septicaemia and diarrhoea.

Hence the importance of good management and attention to detail when foaling mares down at home, as good hygiene and management procedures can be essential in reducing the transfer of bacteria to foals. Other bacteria associated with diarrhoea in foals include Bacteroides, Campylobacter, and Leptospira spp.

Foals that fail to ingest enough colostrum are particularly susceptible to infections, allowing other less common bacteria to proliferate in their system and cause diarrhoea. Measuring the foal’s IgG level 12 hours after birth and treating susceptible foals with plasma can help prevent this type of diarrhoea occurring.

Older foals can also succumb to bacterial diarrhoeas; this can be a standalone condition or seen in conjunction with other clinical signs such as weight loss and coughing. 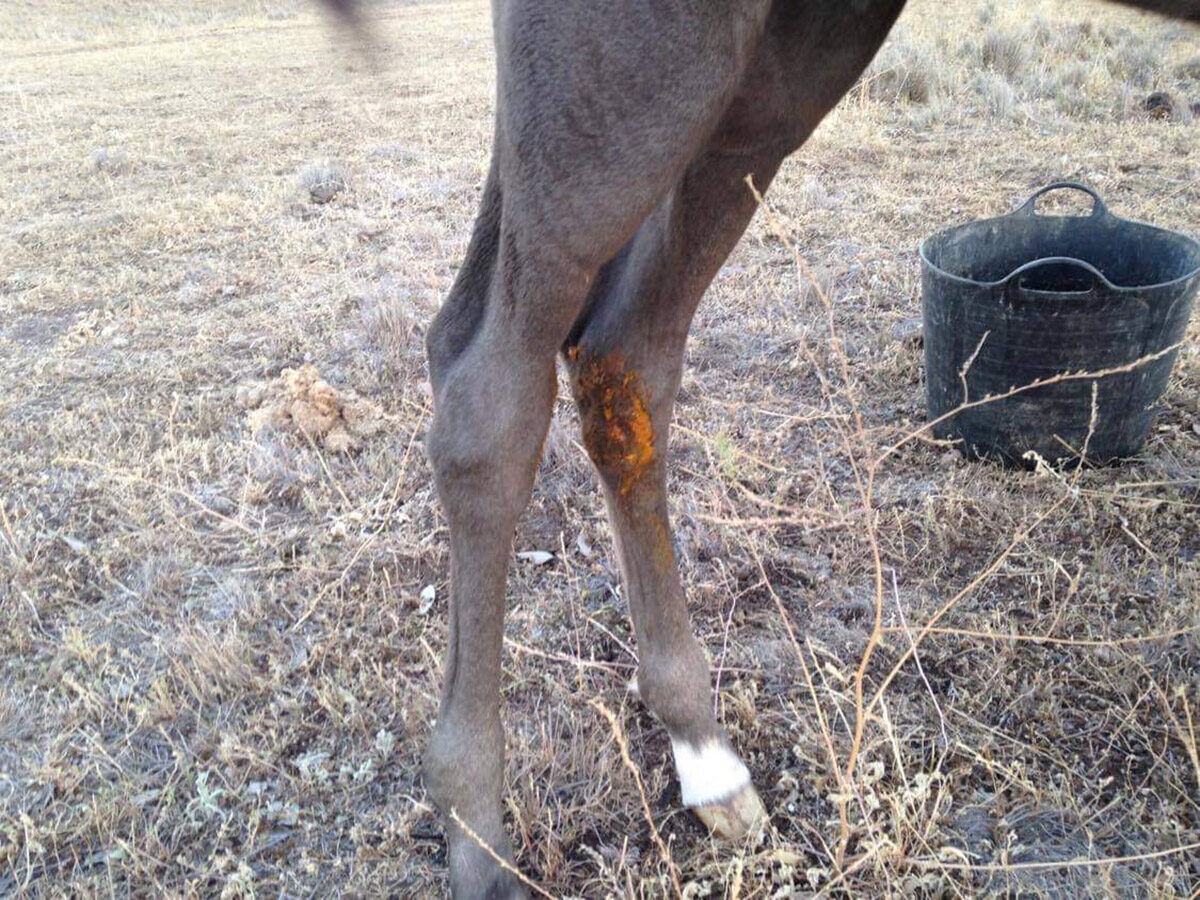 Bacterial diarrhoea is seen in foals of all ages but is a major cause of death in neonatal foals (a foal in its first week of life). 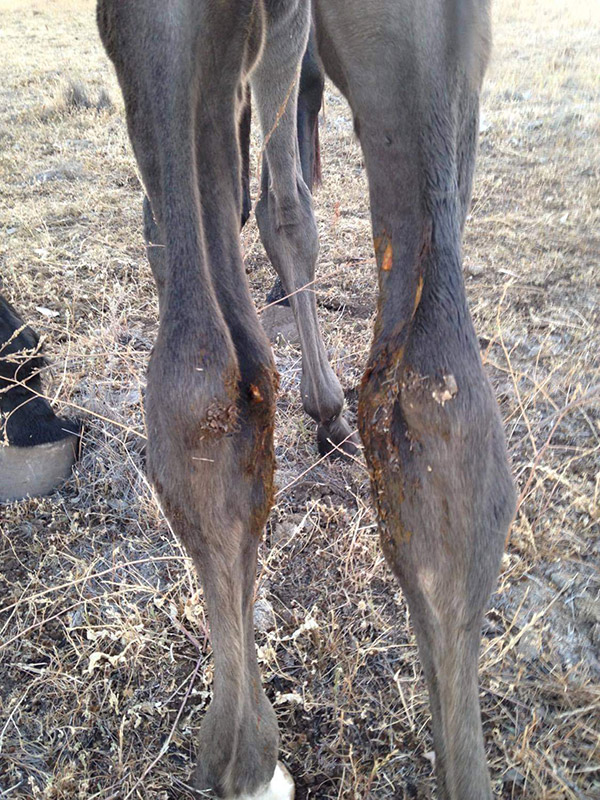 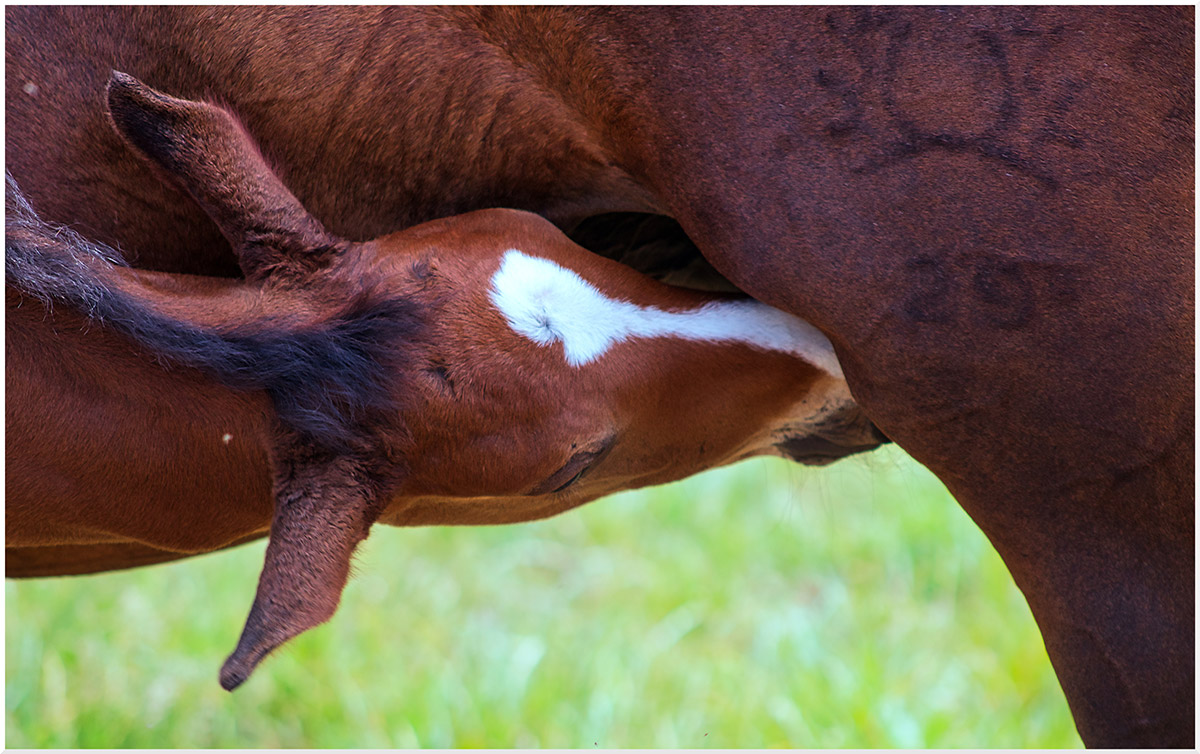 In some cases, foals can pick up salmonella bacteria from the mare's udder.

“The most common virus to cause
diarrhoea in foals is rotavirus.”

The most common virus to cause diarrhoea in foals is rotavirus. This generally affects foals less than 3 months of age but can affect foals up to 6 months old. Clinical signs can vary from foals being mildly off the suck with loose faeces, to high temperatures, depression and severe dehydration. This virus is very contagious so often this condition is seen as an outbreak on farms and can be detected by looking for the virus in faecal samples. The virus invades the lining cells of the gut and stops the absorption of nutrients through the cells and promotes the secretion of body fluids back into the gut causing a profuse watery diarrhoea, which if left unchecked can lead to severe dehydration and death. Often the intestinal cells are so severely damaged that even when the diarrhoea has resolved, the absorption of nutrients remains compromised and the foals become ill-thrifty for many months after the diarrhoea has stopped.

Most foals will recover in 3 to 5 days and require no specific treatment but should be monitored for hydration levels and potential secondary bacterial infections. General supportive care such as cleaning the area around the anus and applying a skin protectant such as Vaseline, to stop scalding, is recommended. 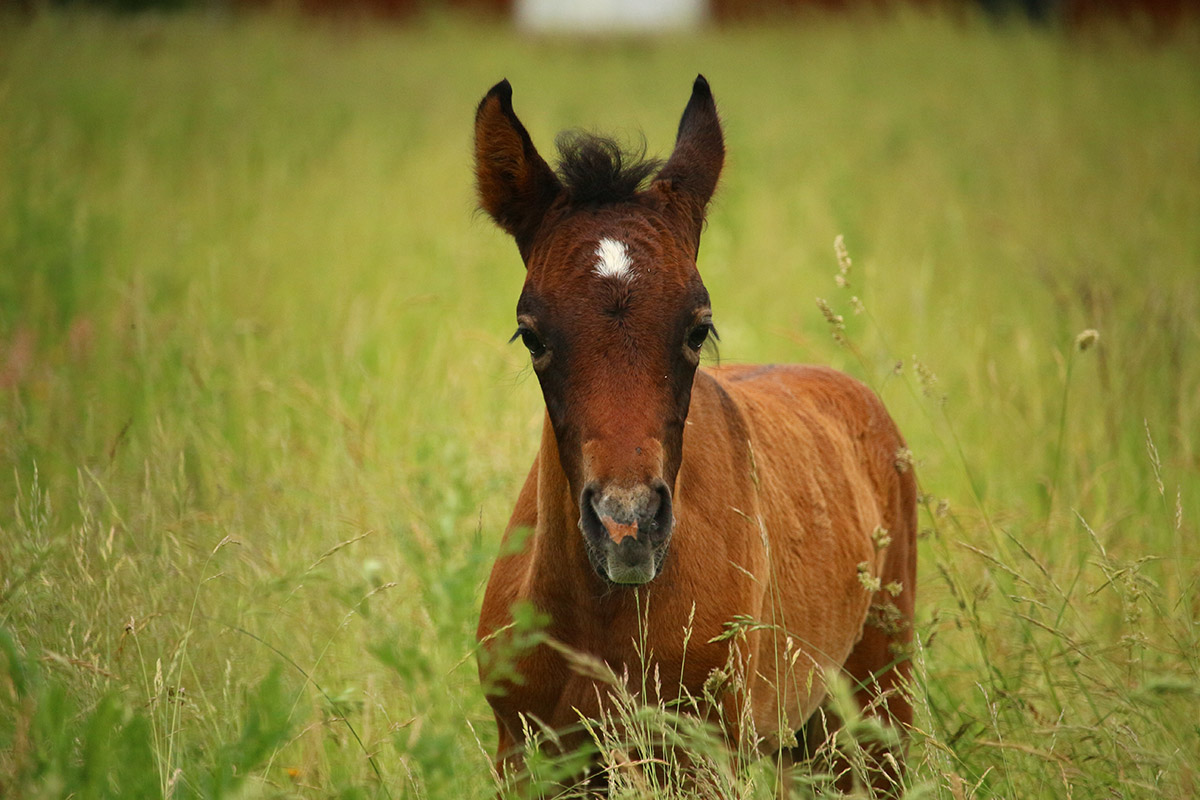 Diarrhoea caused by cryptosporidium can be fatal in Arabian foals that have combined immunodeficiency. 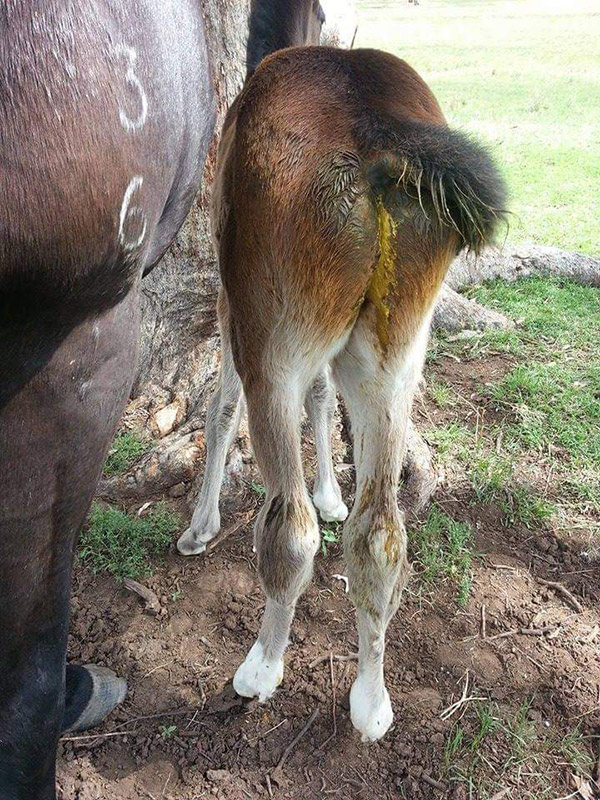 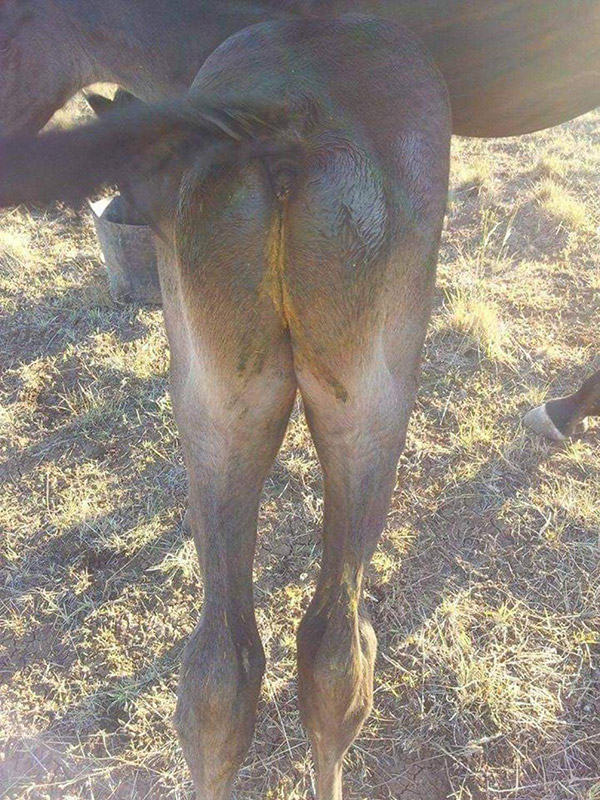 If you are concerned, it is best to consult your vet.

Foals that become severely dehydrated will require fluid therapy, usually in the form of intravenous fluids. In those foals where the diarrhoea persists longer than the standard 3-5 days, they may require intestinal protectants and anti-diarrhoea preparations to help resolve the diarrhoea. There is an association between rotavirus and gastric ulcers in foals, so the use of anti-ulcer medication is beneficial in foals that have diarrhoea for more than a few days.

Rotavirus can survive in the environment for up to 9 months so properties with large numbers of infected foals may continue to have cases every year, unless management practices with good hygiene and low crowding practices are adopted. On farms where rotavirus is an annual problem, a vaccine is available to give to pregnant mares, which builds up the levels of antibodies to rotavirus in the colostrum, giving foals protection in the early months of life.

Other viruses that have been associated with diarrhoea include coronavirus and adenovirus.

Protozoa are small single-celled organisms that can cause disease. The main protozoa linked to diarrhoea in foals is cryptosporidium, and this has been associated primarily with diarrhoea in foals less than 4 weeks, although older foals and weanlings can be affected as well. It appears to have a strong association with immunocompromised foals and can be fatal in Arabian foals that have combined immunodeficiency (a genetic disorder affecting both the B and T lymphocytes, rendering the foal unable to naturally fight off any infection).

Foals with infectious diarrhoea are high-risk individuals, not only to themselves but also to other foals they encounter. Any foal that has diarrhoea should be monitored and if they show signs of being off the suck, depressed or dehydrated, they should be assessed by a veterinarian. Hydration is paramount and foals can die in as little as 24 hours if they are septic and profoundly dehydrated.

The use of antibiotics in foals is dependent on the cause of the infection. Often bacterial diarrhoeas will require treatment, especially if the foal is septicaemic. Viral diarrhoeas will not respond to antibiotics: however, they are sometimes used if a secondary bacterial infection is suspected or occurs. Always speak with your veterinarian if you have any doubts! EQ