BY SUZY JARRATT
content placeholder
Freemanslodge Divine Essence (IMP) was successful in the 5-year-old Pony class at this year's DJWTS. © Half Steps Photography
Previous
Next

The German Riding Pony has become an increasingly popular choice for competitive junior and adult riders in dressage and across all disciplines in Australia since they were first imported less than 20 years ago. 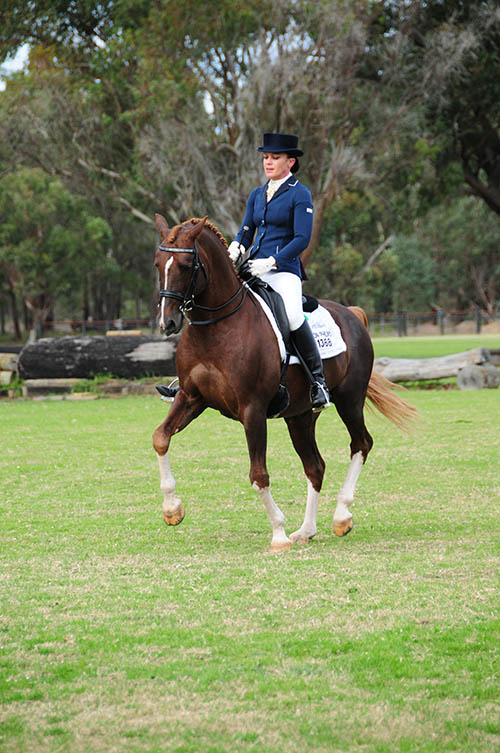 “(Don Philino) was a great
introduction to Australia.”

German Riding Ponies Australia describes the German Riding Pony (GRP) as a breed type that is recognised as a GRP once it has been assessed by the breed associations in Germany as fulfilling the breed standards.

Not only are they athletic and smart enough to make the highest levels of dressage, they are highly competitive and reliable mounts in other disciplines, regularly purchased for show hunter classes and riding mounts, eventing and show jumping and often pony club, trail riding and everything in between!

The first German Riding Pony to arrive in Australia was FS Golden Storm in 2004. The first licensed GRP stallion imported into Australia was Don Philino WE (IMP/DEC), imported by Kristy Renae Jarvis of Dynamik Stallions, Western Australia, in 2008. Don Philino WE was not only a silver medallist in dressage at the Bundeschampionate (the German National Championships for young horses and ponies), he was a gold medallist in carriage driving and also achieved high scores in jumping and cross country. This stallion was a great introduction to Australia with his proven versatility.

Next along came Hilkens Nougat Cream (IMP), a buckskin stallion imported by Tina Barker of Roseglen Stud, South Australia, in 2008. Nougat has won numerous dressage classes and championships in addition to many championships in the show ring. Progeny of Nougat have been very successful in the show ring, the official dressage ring, eventing and pony club. Tina also imported Sweet Belladonna K in 2011, the first State Premium and Performance Tested mare imported to Australia.

While ponies have competed in dressage for many years both in Pony Club, HRCAV and unofficial EA competitions, it wasn’t until 2003 that Equestrian Australia introduced separate official pony dressage classes for juniors 10-16 years old, and then in 2005 opened up pony dressage to riders of all ages. Four years later in 2009 came the introduction of young pony classes at P.S.I. Dressage & Jumping With The Stars (DJWTS).

The 2021, DJWTS, held at Werribee in March, saw many GRP combinations surface. The Jill Cobcroft Australian Young Dressage Pony Champion of Champions winner went to Tamlyn Farm Calamity Jane ridden by Justin Worthy and owned by Mardi Ramsay. This four-year-old GRP mare is sired by Cheval De Luxe (IMP) out of Hesselteichs Gwendolin (IMP). Winner of the Australian Young Dressage Pony 5-Year-Old was Freemanslodge Divine Essence (IMP) ridden by Justin Worthy and owned and bred by Vicki Chidgey. This lovely young mare was imported from Germany at seven months old with her dam, and she is by Classic Dancer 1 and out of St.Pr.St Daisys Davina (IMP) (the prefix ‘St.Pr.St’ denotes ‘State Premium’, a title earned via the GRP licensing and performance testing system). Freemanslodge Divine Essence placed sixth out of hundreds of foals at Folen Championate in Leinen, Germany, in 2016 prior to being imported. Bexter (IMP) is the the first Lewitzer in Australia, sired by GRP Baccarat and out of St.Pr mare Shakira (Lewitzer). He is owned in partnership by Chris Davie of Kenlock Park and Shanon McKimmie and placed third in the Ridden Performance Pony 6 & 7-Year-Old at his first competition on Australian turf. This young stallion was imported in November 2020 and shows promise as a future dressage pony and performance pony; he is also broken-in to harness.

Don Philino WE (IMP) has been successful in both the dressage and carriage driving arenas. 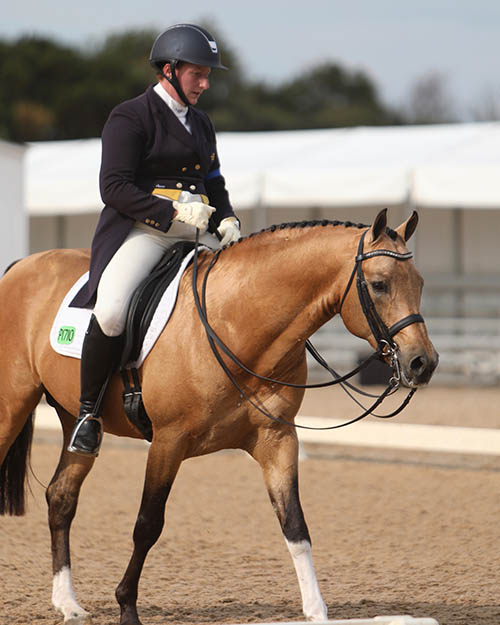 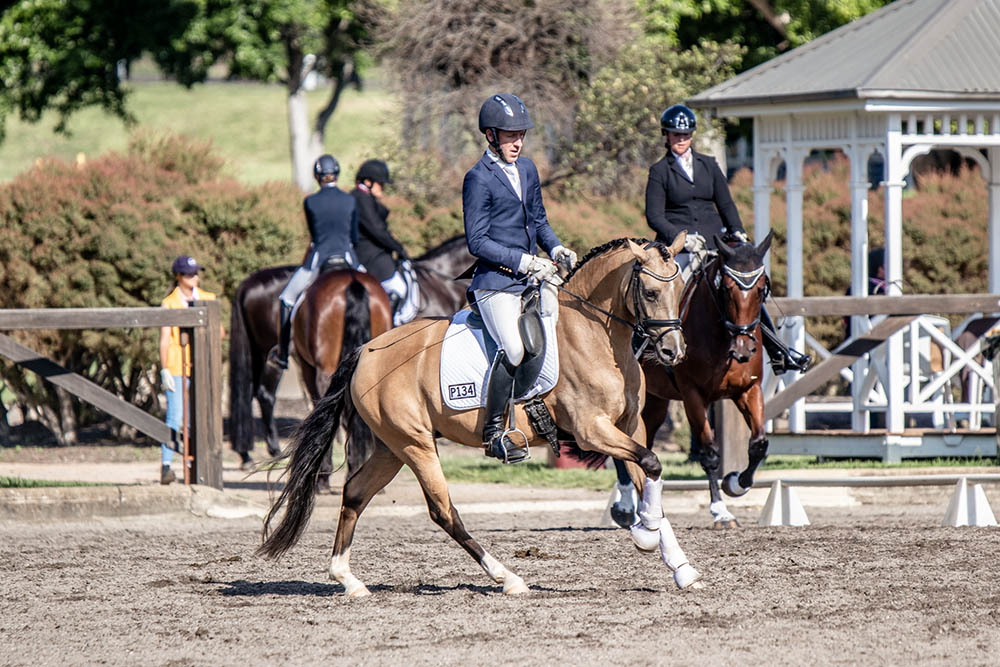 Freemanslodge Divine Essence (IMP) was successful in the 5-year-old Pony class at this year's DJWTS. © Half Steps Photography 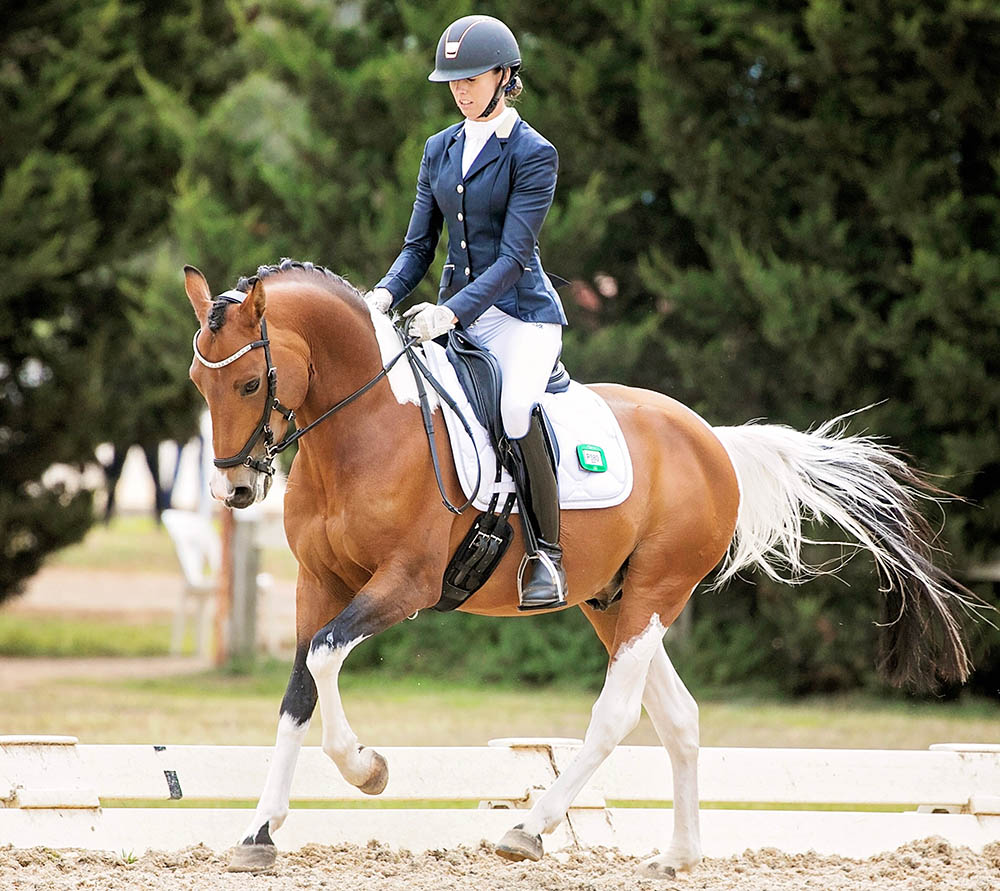 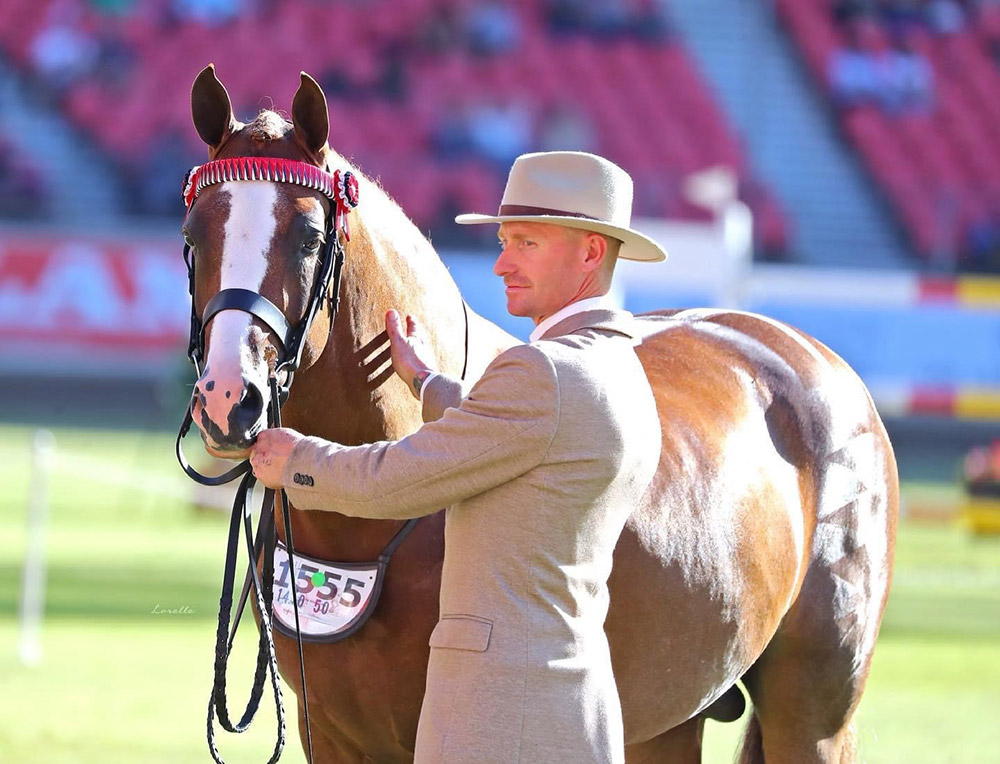 Another young stallion showing the extreme versatility and rideability of the GRP is SPB Noble Dynasty. © Lorelle Mercer 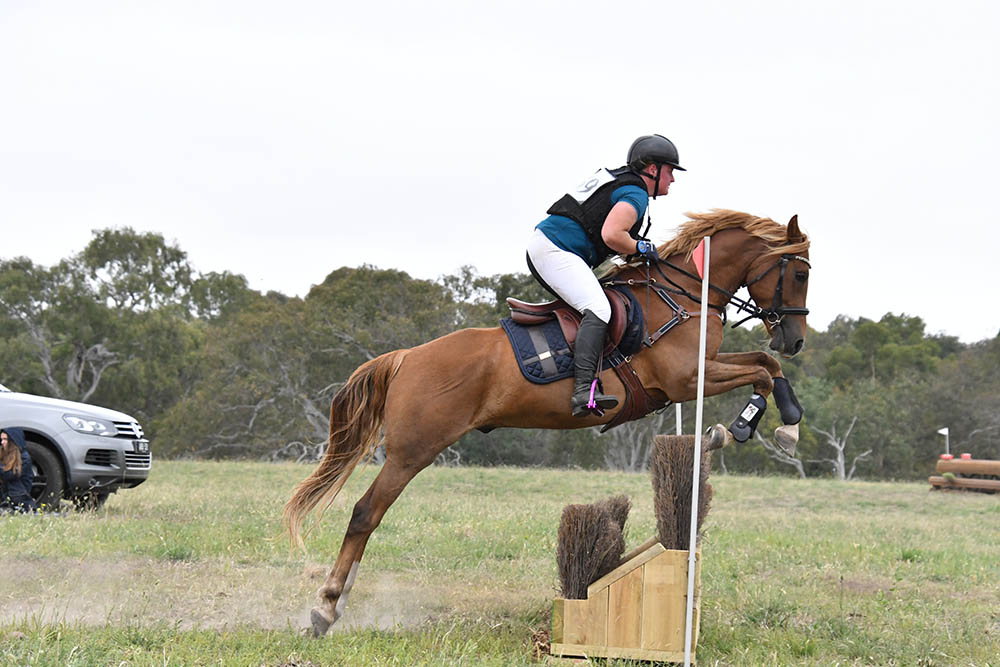 Five-year-old gelding Roseglen Nightmoves, owned by Alison Faulkner and bred by Tina Barker, has had much success eventing and showing. © Tazzie Eggins 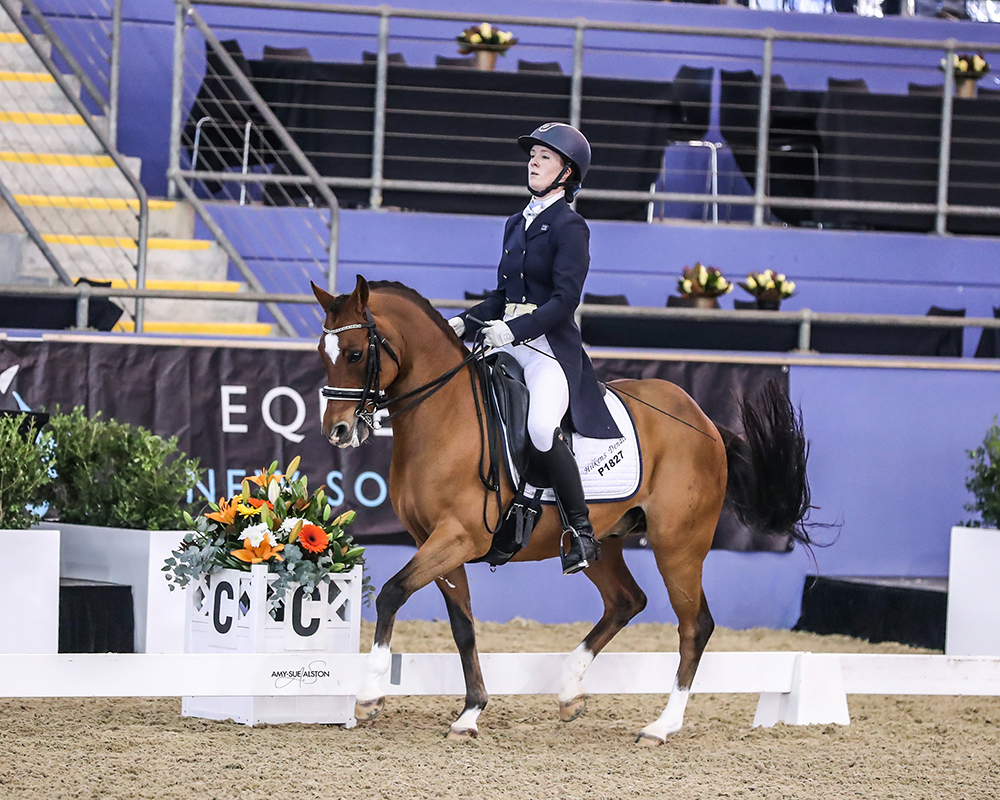 Another young stallion showing the extreme versatility and rideability of the GRP is SPB Noble Dynasty (Noble Dancer (IMP) x St.Pr.St Dailara (IMP) [Danilo x Domingo]). This four-year-old stallion is owned by Willowcroft Stud and produced by Andrew Buckley of E.B. Lodge Performance Horses. “Will”, as he is affectionately known, had a very successful Sydney Royal recently; at his first big show he won Champion Led Part Welsh Stallion or Colt, first Ridden Part Welsh Stallion or Colt, Reserve Champion Led Arabian Derivative Stallion or Colt and second in his Ridden Arabian Derivative class. No doubt there will be big things to come from this boy in the dressage and show rings.

Five-year-old gelding Roseglen Nightmoves, owned by Alison Faulkner and bred by Tina Barker, has had much success eventing and showing. He is by Hilkens Nougat Cream (IMP) out of Roseglen Pandora who is sired by Don Philino WE (IMP). Kristov, as he is known, recently had his first EvA80 start at the 2021 Heytesbury Horse Trials with much success. Weeks before that he was sashed Reserve Champion Show Hunter Galloway at Deniliquin Agricultural Show. He is the perfect example of how versatile the German Riding Pony breed is.

In the show ring, Kingsfield Arlington certainly is leaving his mark. This gelding, sired by Kennedy WE and out of a New Forest x Warmblood mare with Richmeed Medallion bloodlines, has had much success both in hand as a youngster and competing under saddle at Royal and National Level. Known as Jack, some of his achievements include placing third in the Ridden Small Show Hunter Galloway at Hufglocken Show Horse Council Grand Nationals in 2019 and 2021. Jack has had much success at HOTY level, including NSW HOTY Champion Led Show Hunter Galloway 14-14.2hh.

Most recently, Hilkens Denali (IMP) had success at the 2021 Sydney CD-Lite, coming third overall in the Medium Tour. Hilkens Denali was the only pony in a field of 17 horses. This gelding, owned by Wendy Lorincz and ridden by Alison Gill, has had huge success in Australia and prior to his move, also in New Zealand with his previous owners. He is known to his friends and family as a small pony with the biggest heart.

All of these ponies are wonderful ambassadors for the GRP in Australia and are perfect examples of how trainable and versatile this breed is. There are many exciting stars of the future growing up, with over 700 Australian-bred German Riding Ponies and crosses and 52 imported GRP stallions, mares or geldings on the German Riding Ponies Australia database to date. The future for pony dressage and performance ponies is certainly looking bright.

For more information on the breed visit www.germanridingpony.com.au EQ

From Austria With Love, The Golden Horse – Equestrian Life, February 2021

A Godsend for the Connemara – Equestrian Life, February 2021

To Breed or Not to Breed, That is the Question – Equestrian Life, October 2020